Menthol cigarette smoker? Caught by surprise by the sudden disappearance of your favourite cigarettes thanks to the EU TPD ban on flavoured cigarettes that came into effect on the 20th of may this year? Then Edge might have the answer for you in the shape of their new Edge Hybrid kit.

The Edge brand was launched in 2016 and all its eliquid ranges are made right here in the U.K. in a fully certified iso lab with premium pharmaceutical grade ingredients. You may have seen them on prominent display in your local supermarket tobacco booth, I spotted them in Asda today whilst I was buying a lottery ticket, and their products are available in over 18,000 retail outlets in the U.K.

Edge wanted to offer something new to the starter kit offerings available as research has shown that 37% of smokers who tried vaping disliked the unfamiliar feel of a hard mouthpiece (YouGov survey?). The Edge Hybrid offers an optional soft microfibre filter tip that is both familiar to smokers and offers a true to life draw resistance similar to a cigarette. I had noticed over the last couple of years the rising popularity of click cigarettes, where you can pop a menthol pod concealed in the filter tip, amongst the smokers at work and that is also included here. 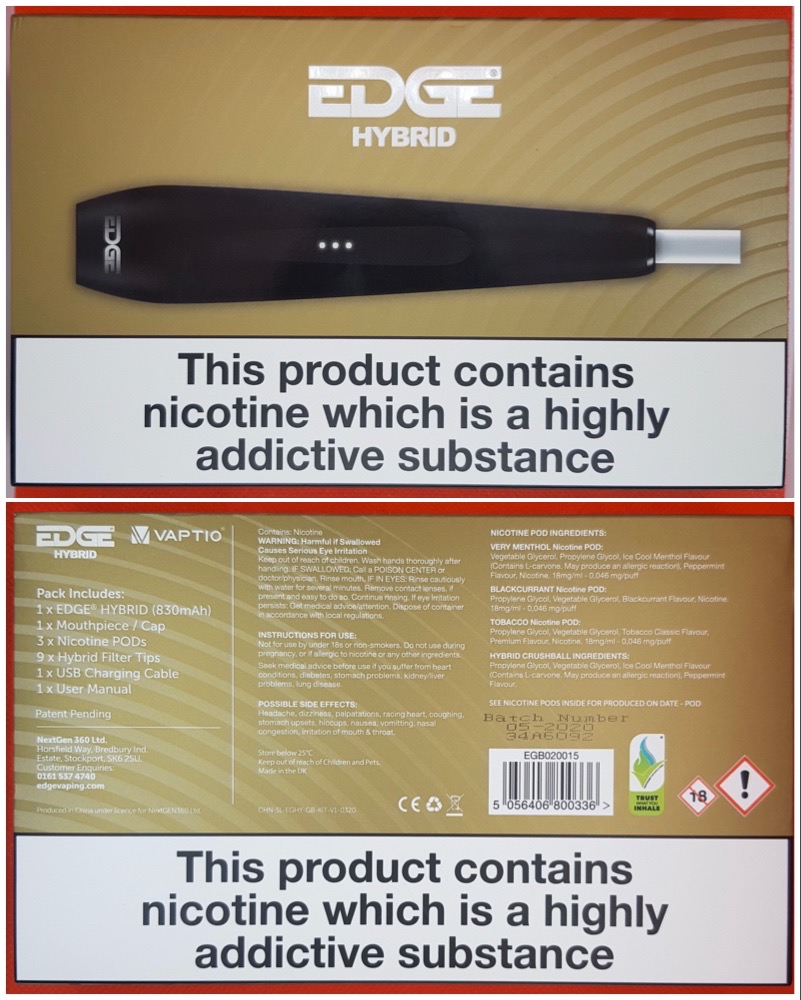 The Edge Hybrid kit comes in a fairly large box (it barely fit into my little light box that I use for photos) with a prominent picture of the device on the front, and a very comprehensive list of contents and ingredients on the back. 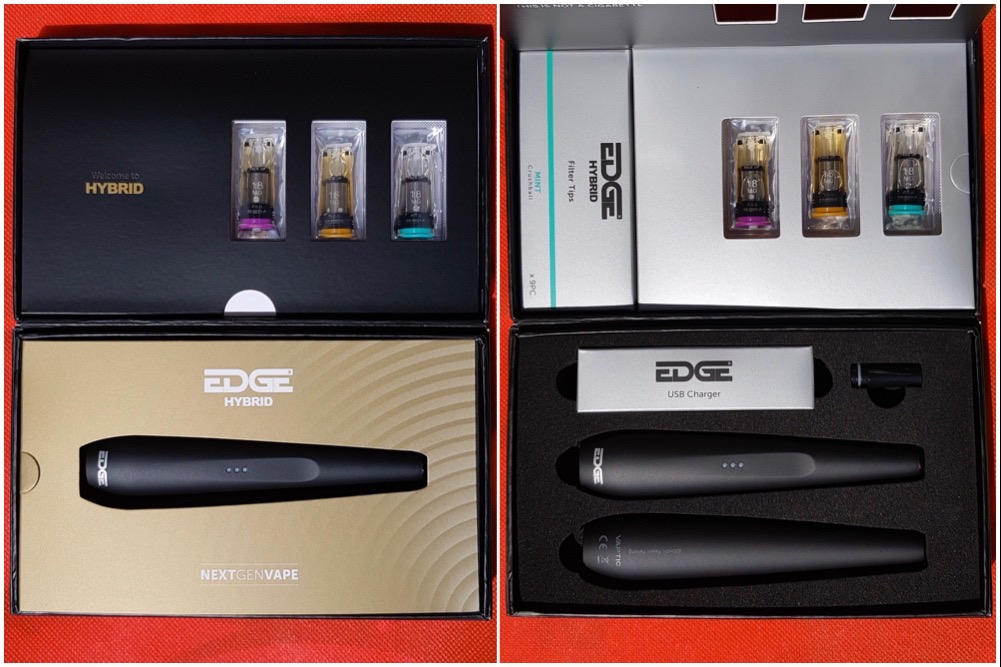 Once you remove the outer sleeve, you’re presented with a flip top box which opens out to reveal your kit on the bottom along with three pods on the top. Edge have included their three most popular flavours for the launch of the Edge Hybrid kit, “Very Menthol”, “Blackcurrant” and of course “Tobacco”. Alongside this, you get some additional promotional cards, a pack of the mint crushball filter tips (9 tips) and a usb-c charging cable. I have to say the packaging is very neatly done. 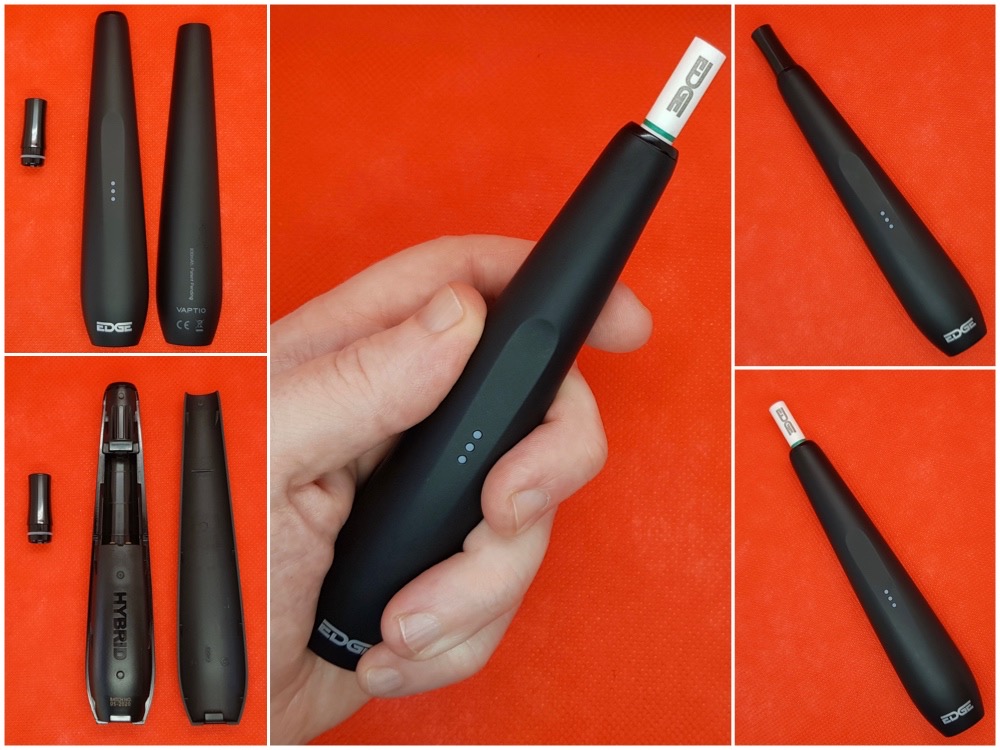 The main device is largely constructed from plastic and weighs just 43 grams. It has a tear drop design with one side being removable to insert and remove pods, the other side has three bright leds to indicate approximate battery charge, and finally there’s a usb-c charge port on the bottom. It’s fairly tall at 150mm, with either the included drip tip or a filter tip, but slim measuring about 27mm x 20mm at its widest point. It features a draw activated system so there are no buttons or complicated menus to confuse new users.

Edge claims an 830mAh battery capacity, and my charge test confirmed this with 832mAh recorded. Charge time was a little disappointing though taking a full 1 hour and 55 minutes due to its low 0.5amp charge rate. Thankfully vape whilst charging is supported to offset this somewhat.

The Edge Hybrid kit comes with the rather unique filter tips with mint crushball technology. The idea here is that it gives a more familiar mouth feel and draw strength to current smokers than a plastic drip tip. There is also a drip tip included if you don’t want to use those which doubles up as a protective cover for the filter when in a pocket for example, but it’s suggested you don’t use both at the same time. Both have a similar draw, a tight mouth to lung, that any smoker should be instantly at home with. 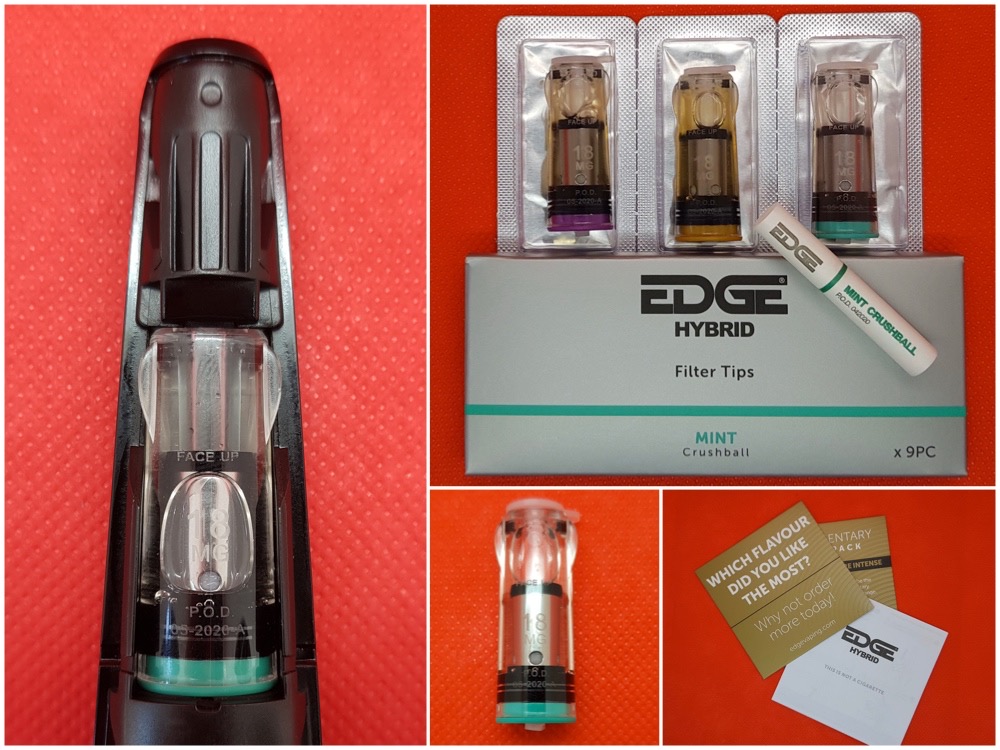 The pods employ a vertical nichrome coil, so you may wish to bear this in mind if you are sensitive to nickel as this kit may not be the best choice for you. One other thing I noticed on the box was a warning, on both the menthol pod and the filters, that they contain L-Carvone which “may produce an allergic reaction”. A little further digging online revealed that L-carvone is responsible for the minty flavour and it has been shown to cause contact allergy in a small number of users (between 0.75% and 3% in one study I found) when used in spearmint toothpaste and chewing gum. I did get a slight tingling sensation on my lips when using the crushball, but I seem to remember getting exactly the same thing with my menthol cigarettes all those years ago as well so unless you have a known sensitivity to spearmint/L-carvone I wouldn’t worry about it. I’m giving top marks to Edge here for clear labelling on their products which allows consumers to make more informed choices.

The pre-filled pods have a 1.3ml capacity and come in a sealed packet with protective silicone bungs in the top and bottom to reduce the chance of leaking in transit or storage. It should also be noted that the pods only fit into the Edge Hybrid one way, with the printed side towards you, I didn’t read the instructions and was initially baffled as to why I couldn’t get the removable panel to close! Edge have selected their three most popular flavours for the Edge Hybrid kit so let’s take a closer look at those next.

A mild menthol which isn’t overpowering, I detected a pleasant hint of mint as well and when I checked the box, it does list peppermint flavour in the profile which is something I use regularly in mouth to lung setups so I was instantly at home with this flavour. Adding the filter dropped the flavour off slightly but pop the crushball and you get a boost in flavour as it has the same flavour profile as the pod.

The fresh fruity blackcurrant flavour comes through rather well and doesn’t have that sweet candy taste often found in pre filled pods. The filter dulls the flavour a little as before, but this isn’t as pronounced as the menthol or tobacco flavours so if you’re a smoker who wants the familiar feel of a cigarette filter tip this might be the best choice, pop the crushball and you get that satisfying mild menthol and peppermint mixed in with the fresh berries, lovely!

I’ve never been a fan of tobacco vapes, which probably stems from the fact that I was a menthol cigarette smoker for 25 years, so this should be a good test of the mint crushball system as this is exactly the type of smoker this kit is aimed at.

I was actually surprised by the flavour here. I was expecting the distinctive “ashtray” flavour that many pre filled tobacco pods seem to favour, instead I got a creamy caramel tobacco flavour that I actually found quite pleasant although I still don’t think I could use this as an all day vape. Again adding in the filter tip the flavour dropped off a bit but perhaps not as much as the menthol pod. Crushing the clickball overlaid that menthol and peppermint on the tobacco flavour which was even more satisfying.

I found all three of the available flavours to be very good, so much so I’ve finished all three pods including the tobacco one. Edge have done a really good job on getting these flavours to pop in a starter kit like this with flavour choices that should appeal to smokers and I like that they’ve included all three in the Edge Hybrid kit as this gives new vapers the opportunity to try them all.

The mint crushball filter tips were pleasant to use as well and I enjoyed the ability to add that minty kick to the flavours, they did become soggy after a while which is probably why replacement pods come with three filters included. This should definitely appeal to cigarette users who miss their menthol click cigarettes. Replacement pods/filters seem to be competitively priced as well at just £3.50 a box with the starter kit itself running at £25 which, you can find them both here.

If you’re a current smoker looking for something that has a more familiar feel than those “weird e-cig things” then this could well be a good place to start especially if you miss your menthol cigarettes. The Edge Hybrid kit and replacement pods should be widely available as well including, at a lot of supermarket tobacco booths,  so I encourage you to consider buying this instead of that next pack of cigarettes, you might be pleased you do. 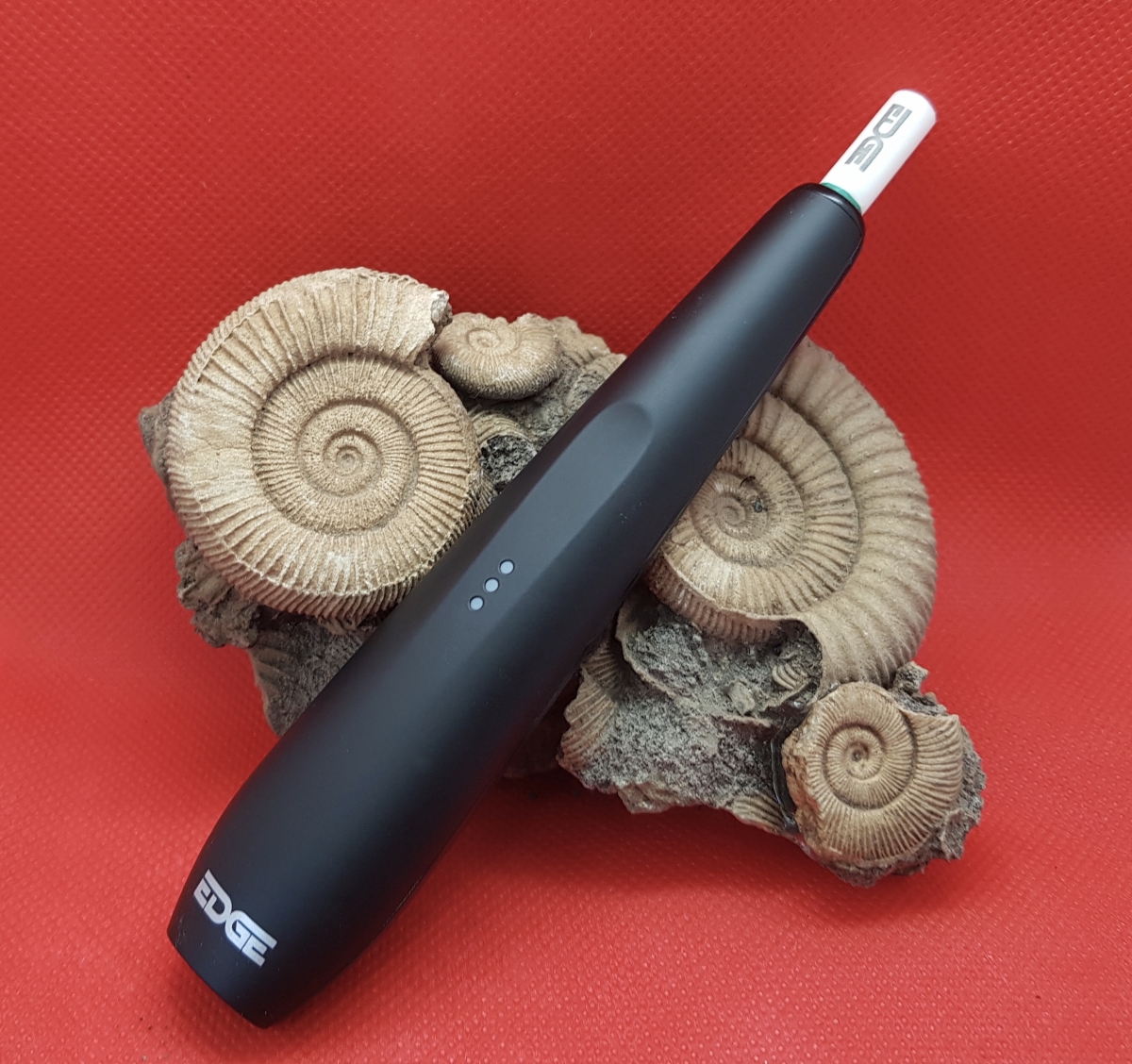