Tralus is a planet located in the Corellia system at the coordinates F-8 on the Standard Galactic Grid, along with its twin planet Talus. So now that’s out of the way, Tralus is also the name of the latest pod system from Joyetech.

As much as most of us are bored with the influx of pod kits coming out, there’s always room for better ones and improvements, and  Joyetech have aimed to deliver all you need from a pod all bundled up in a rather fancy body. 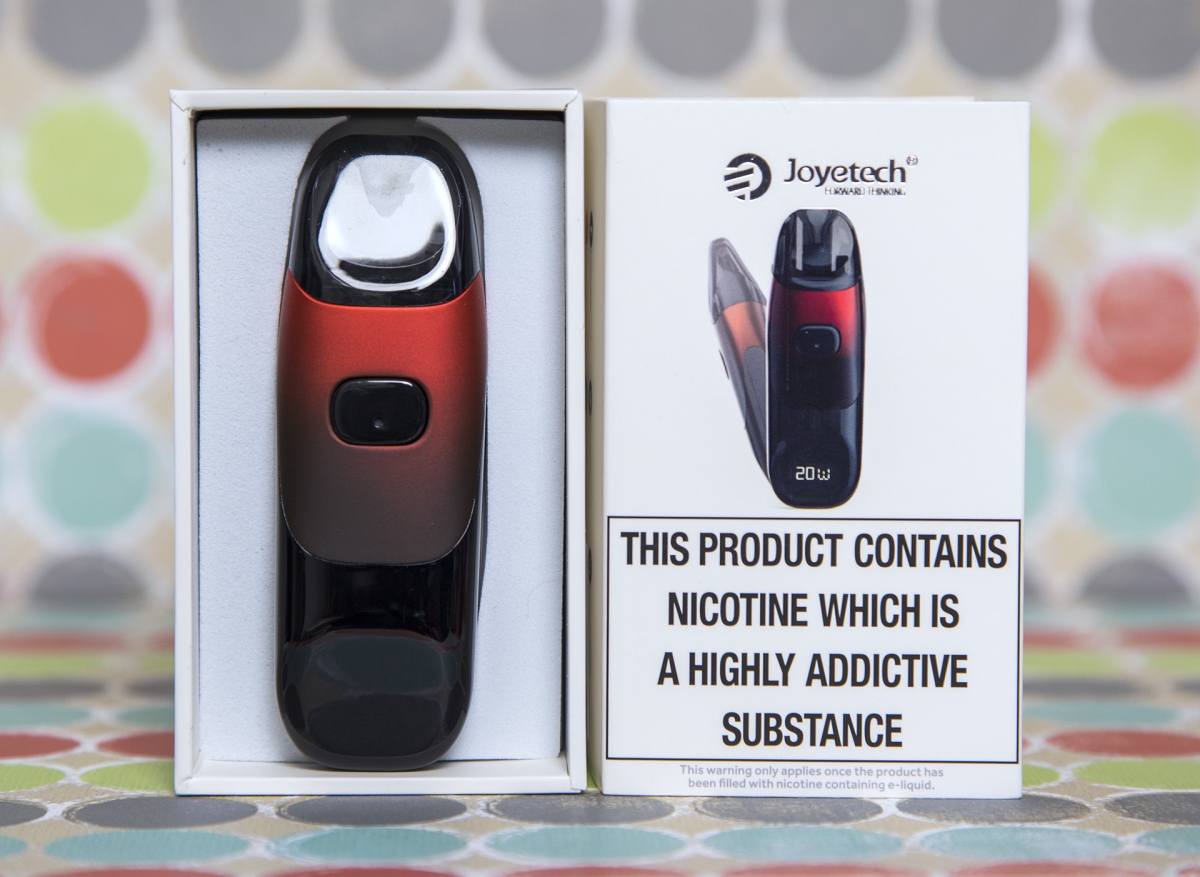 The Tralus comes in simple packaging, an open box and a sleeve with basic info. On the top layer is the pod kit, and underneath are the extras. 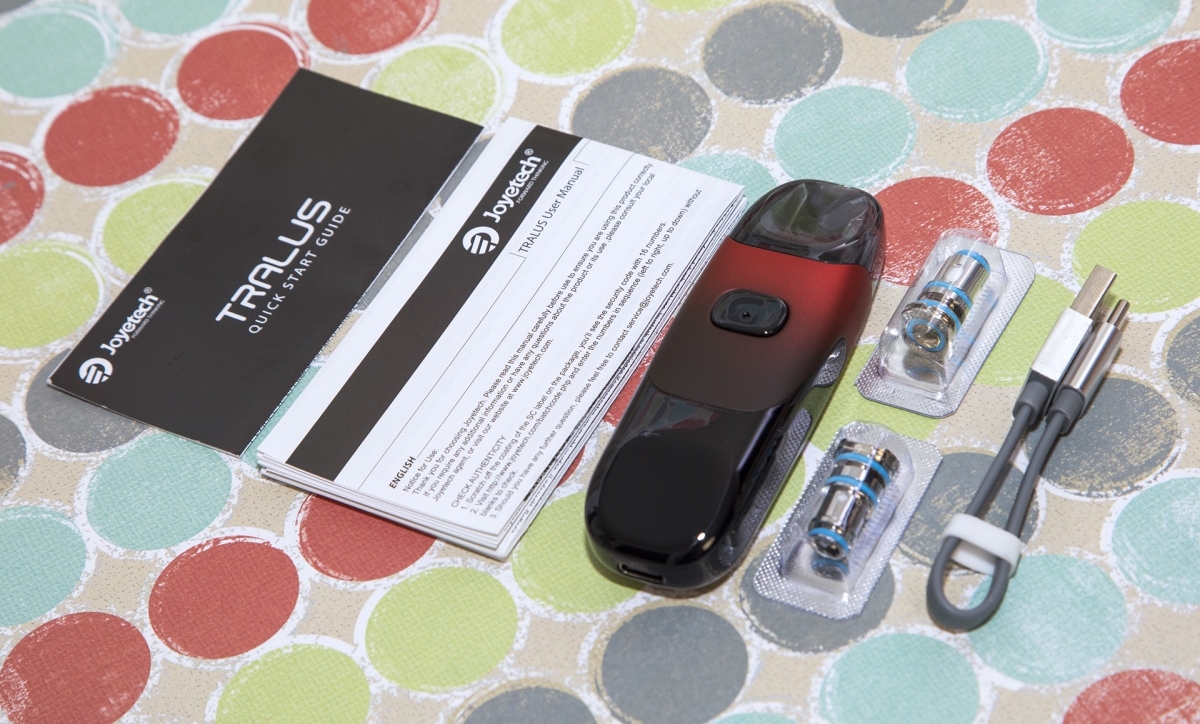 There are two different coils for you to try which either suit MTL (1.2Ω) or restricted DL (0.6Ω). Also included is some documentation including a Quick Start Guide, and a cutie ickle baby USB-C cable which is shorter than a scot’s temper but might be useful if you charge via a laptop. For me, if it’s under 500mm it goes in the bin.

As soon as I got my grubby mitts on the Tralus, I was very impressed with how it looks and feels. Bear in mind I have tried sooooo many damn pods that it’s rare I get enthusiastic with new ones, but the Tralus grabbed my attention. Its shape, weight and size are really pleasing, it feels almost therapeutic in the hand as the shape is one of those things you naturally fiddle with between vapes, the contours are so smooth and tactile.

I popped one of my own USB-C cables in and let the battery charge, the small screen at the base of the pod displays the remaining time to fully charge and counts down. It said 27 minutes, so in the meantime I turned my attention to the pod.

Even the pod looked interesting. It has one of those ‘push to fill’ nozzles at the base and a little airflow adjuster tab to the one side which looked promising. 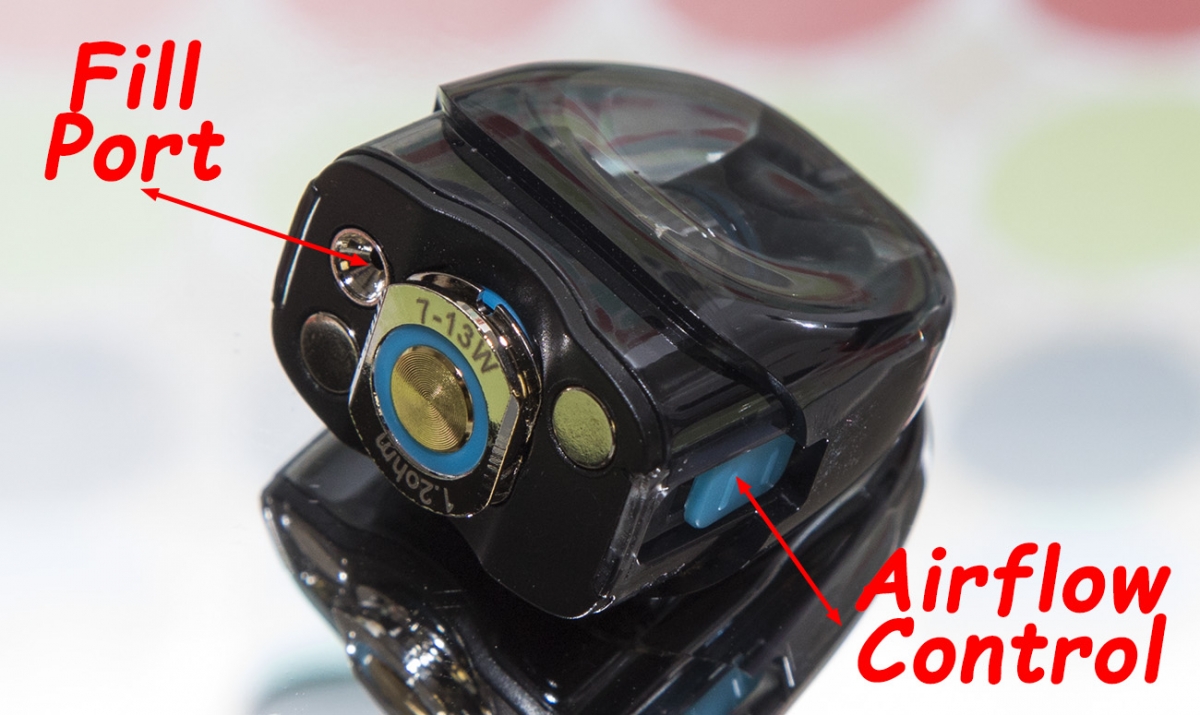 The coils are a simple press fit with location flats that need to be aligned to allow a proper fit. I chose to start off with the 1.2Ω coil for MTL. A nice touch was the clear marking at the base of the coil showing the ohms and wattage range. 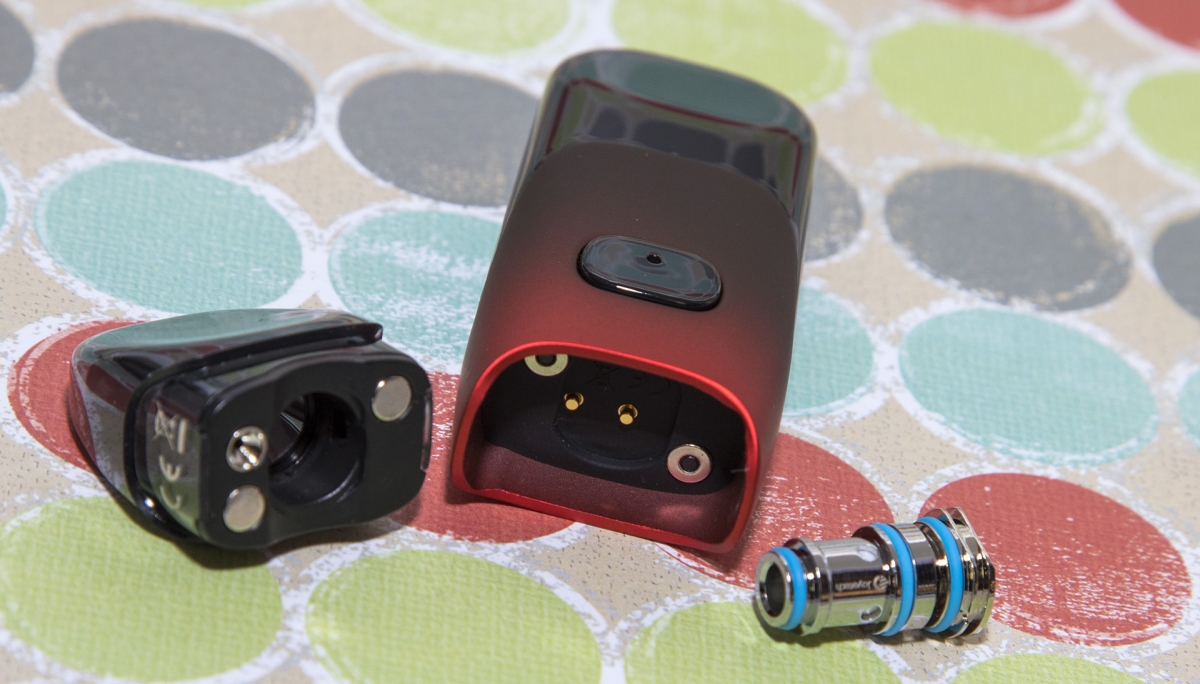 The pod is held in place with magnets which hold it really firm with no wobble in the fitting. When the power is on (5 x Fire), the small screen at the base of the displays the Ohms of the coil fitted and sets the wattage to the ideal setting, 9 watts for the 1.2Ω coil, and you can increase or decrease it via clicking the fire button 3 times then press fire for 1 watt increments. It round robins after 20 watts back to 1 watt.

After the battery had fully charged and I had fitted a coil into the pod, I filled it up. This was a little fiddly with my 10ml thin nib bottle as it was a bit too flexible, but I soon got the hang of it and filling was mess free.

I adjusted the airflow tab upwards which appeared to close the airflow off although I could still see a gap at the bottom, sliding it downwards is for full airflow (Restrictive DL). After leaving my coil to saturate for around ten minutes, I took my first vape. The airflow was a little too loose for my MTL tastes, it reminded me of the Smok Nord airflow. Also the mouthpiece was a bit too large, but the flavour was superb. 9 watts was fine for me and anything up to 12 watts worked well for this coil.

Though not ideal, I soon got used to the airflow and mouthpiece. It’s simply a loose MTL draw but with superb flavour so I was enjoying the vape from it. I stuck with it for a couple of days before I swapped over the coil to the 0.6Ω DL option using 70VG/30PG 3mg (Prime Vapes Apple Crumble) and opened up the airflow fully. At 18 watts, I was more impressed with the restricted direct lung draw, flavour was surprisingly good for such a low wattage and the mouthpiece suited this style better. Vapour production was impressive for such a small device.

Battery life is pretty good, MTL lasted me over a day and DL lasted me well over half a day. Charging time was rarely more than 40 minutes. 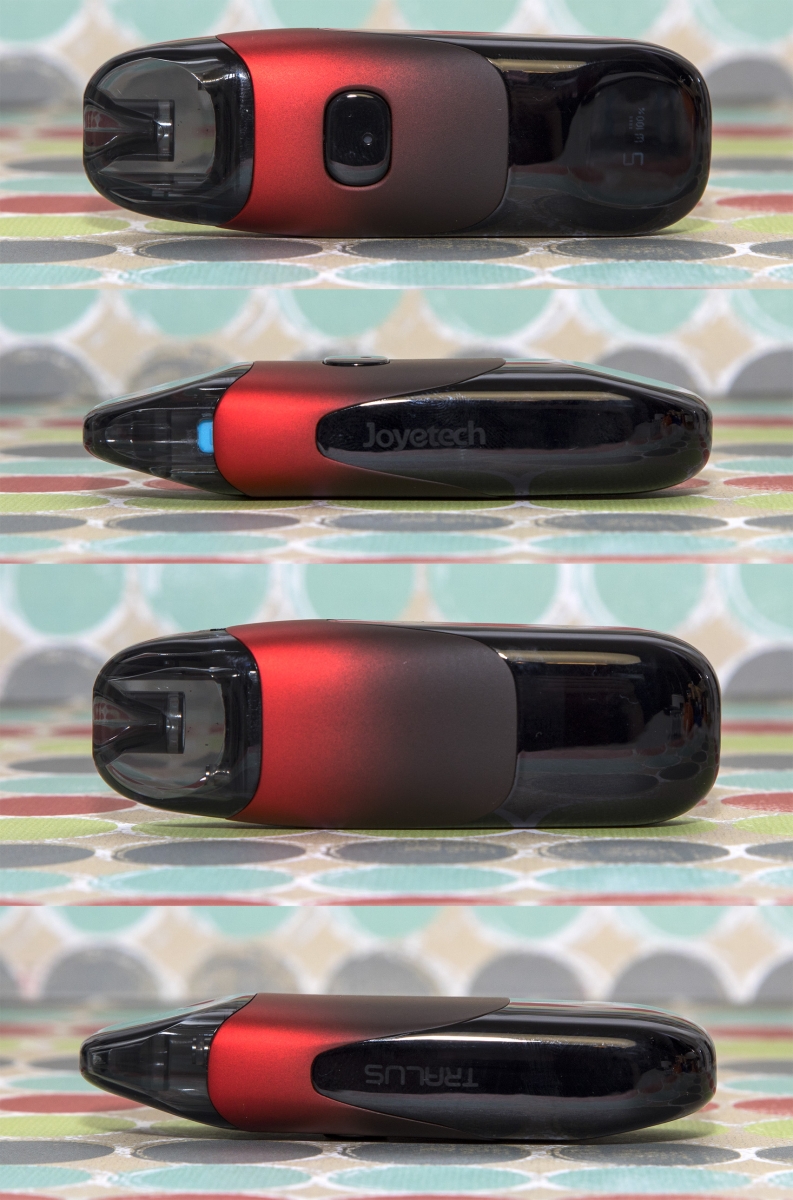 Pods have evolved so much since I started using them, but finding a pod that suits your tastes only gets harder with too many choices on the market. The Tralus would suit people that enjoy either a loose MTL or a restrictive DL, but if you prefer a tight MTL then this one won’t be for you.

Other than that, the Tralus is a very impressive little pod. I love the little screen and the ergonomics/aesthetics of this pod so much, and the coils really surprised me. I’ve never been a fan of Joytech coils until now, if the airflow was tighter for MTL this would have been one of my favourite pods of all time.

I’m surprised how much I like the Tralus, it feels so damn good in the hand and the flavour is superb. The MTL airflow is likely to be a deal breaker for some, but restrictive DL user will likely love this cracking little pod. It’s one of the few pods I will continue to purchase new coils for (and trust me, there are very few that I do that for). 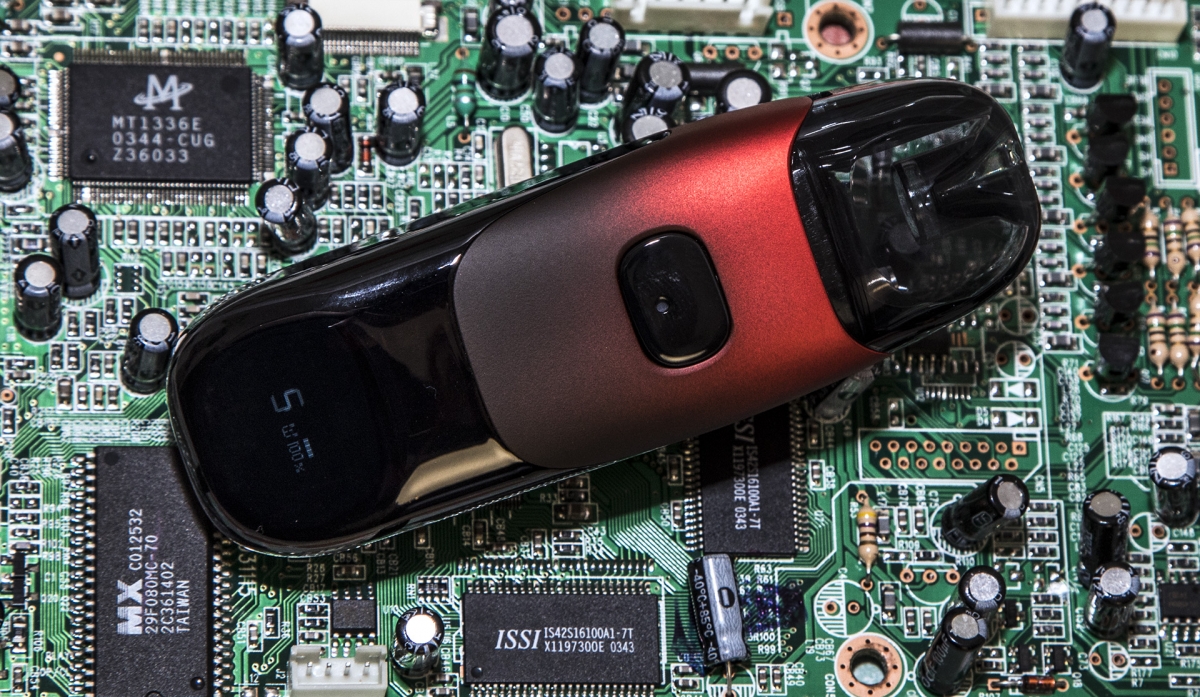