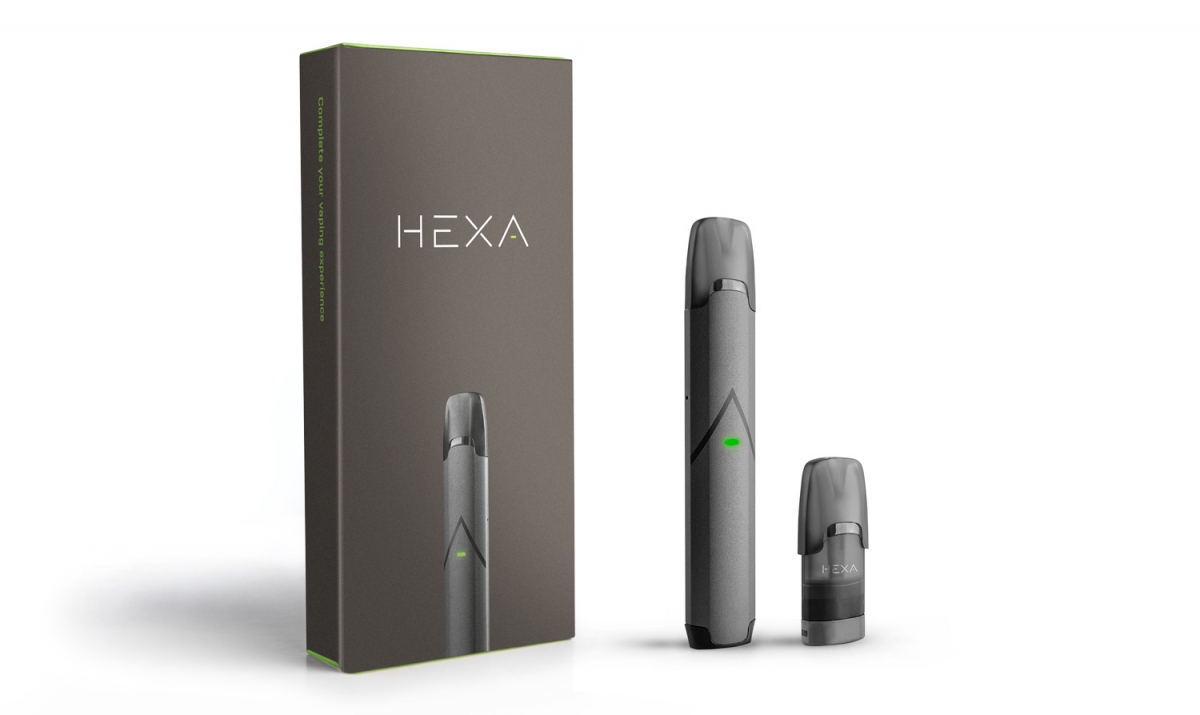 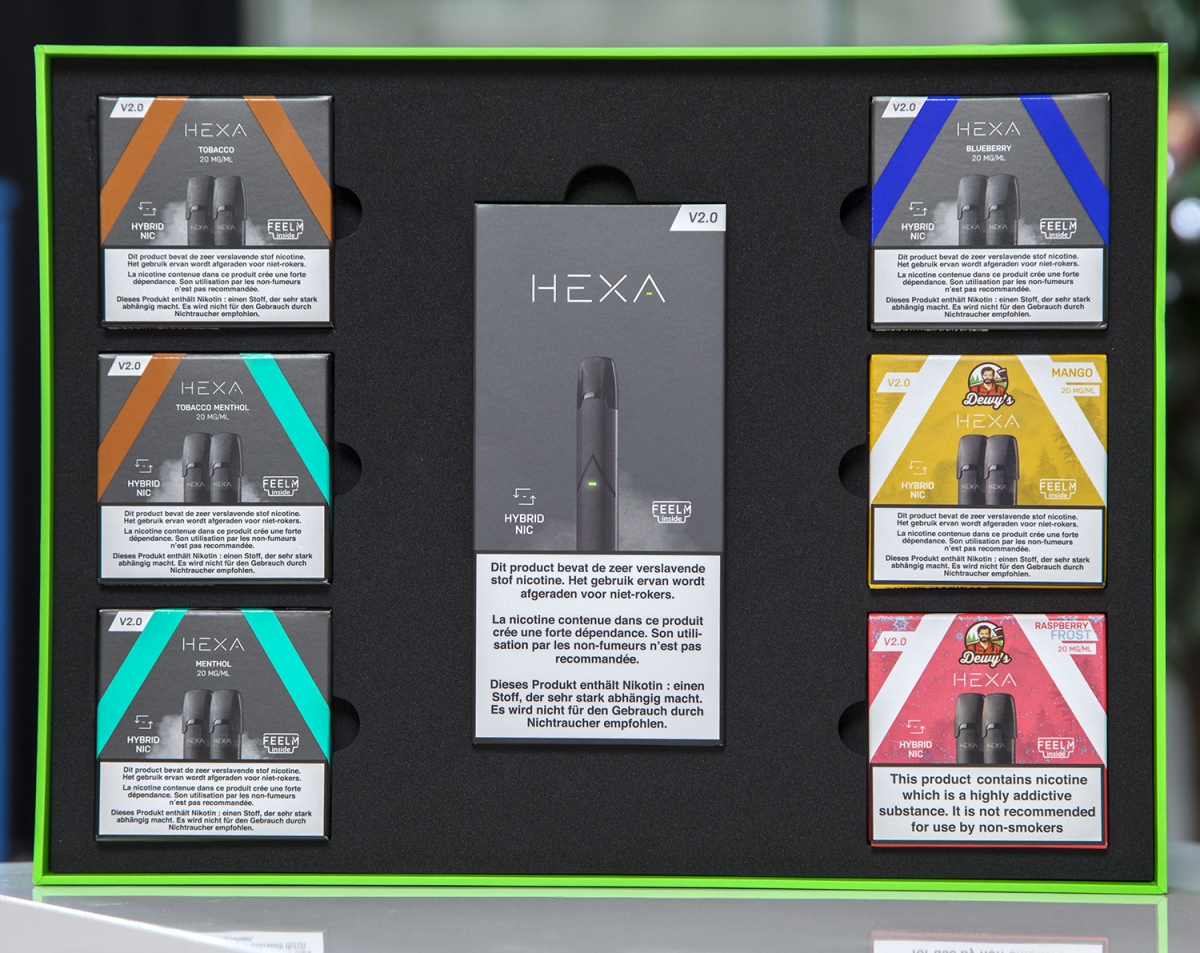 The Hexa V2 is an updated version of the original Hexa Pod. I haven’t tried the original so I cannot compare and will review at face value.

This is a starter kit aimed at beginners and people attempting to quit cigarettes. Its simplicity is its main strength as there’s no settings, no controls or vaping knowledge required to get going, simply charge, pop a disposable pod in and vape away.

As an experienced vaper I have put myself in beginner mode and treated this as when I tried to quit the ciggies, I have used it exclusively for a week and tested all the flavour pods.

(For the starter kit without flavours pack) 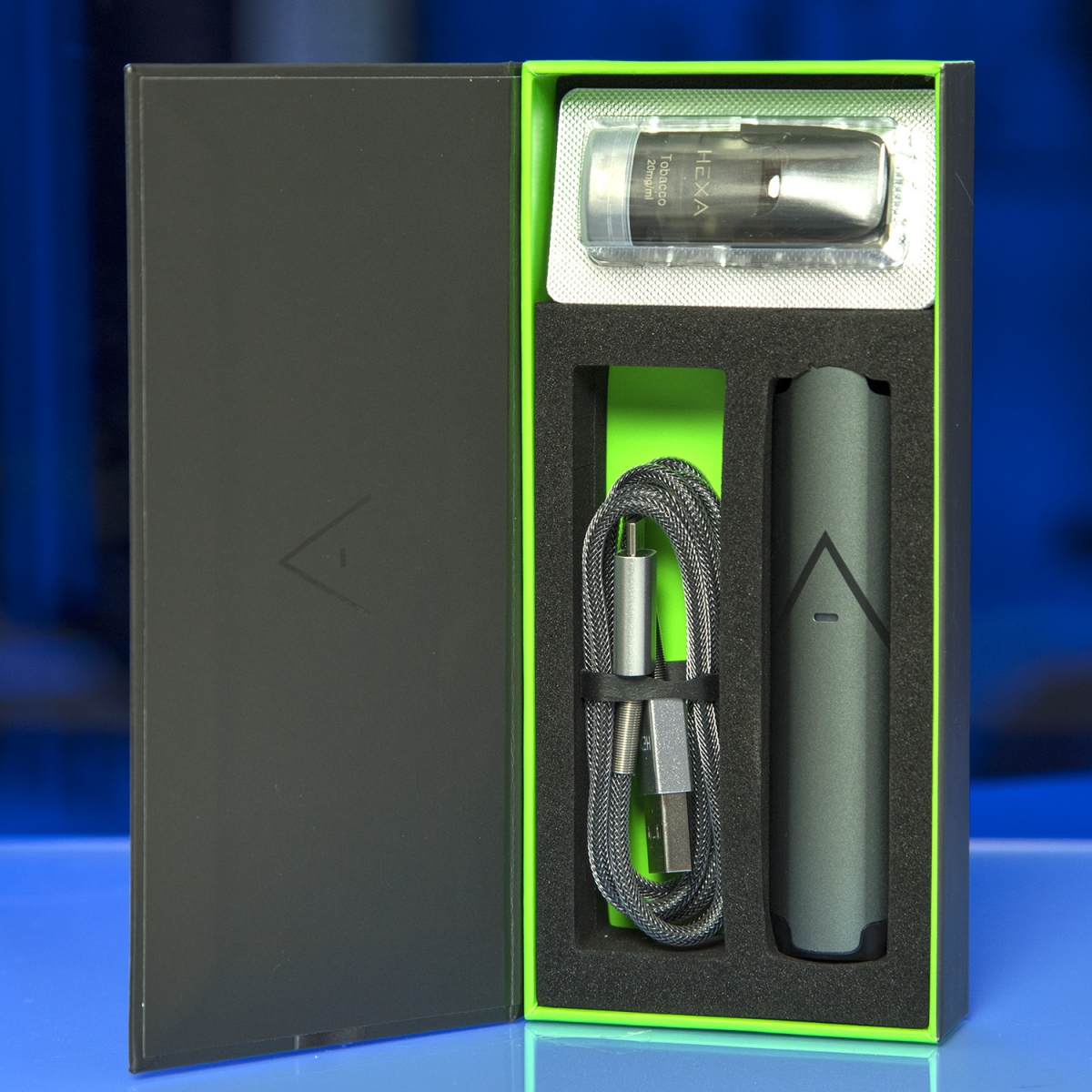 I didn’t receive instruction in my review version but you really don’t need any as it's user friendly by design and everything is common sense and simple. 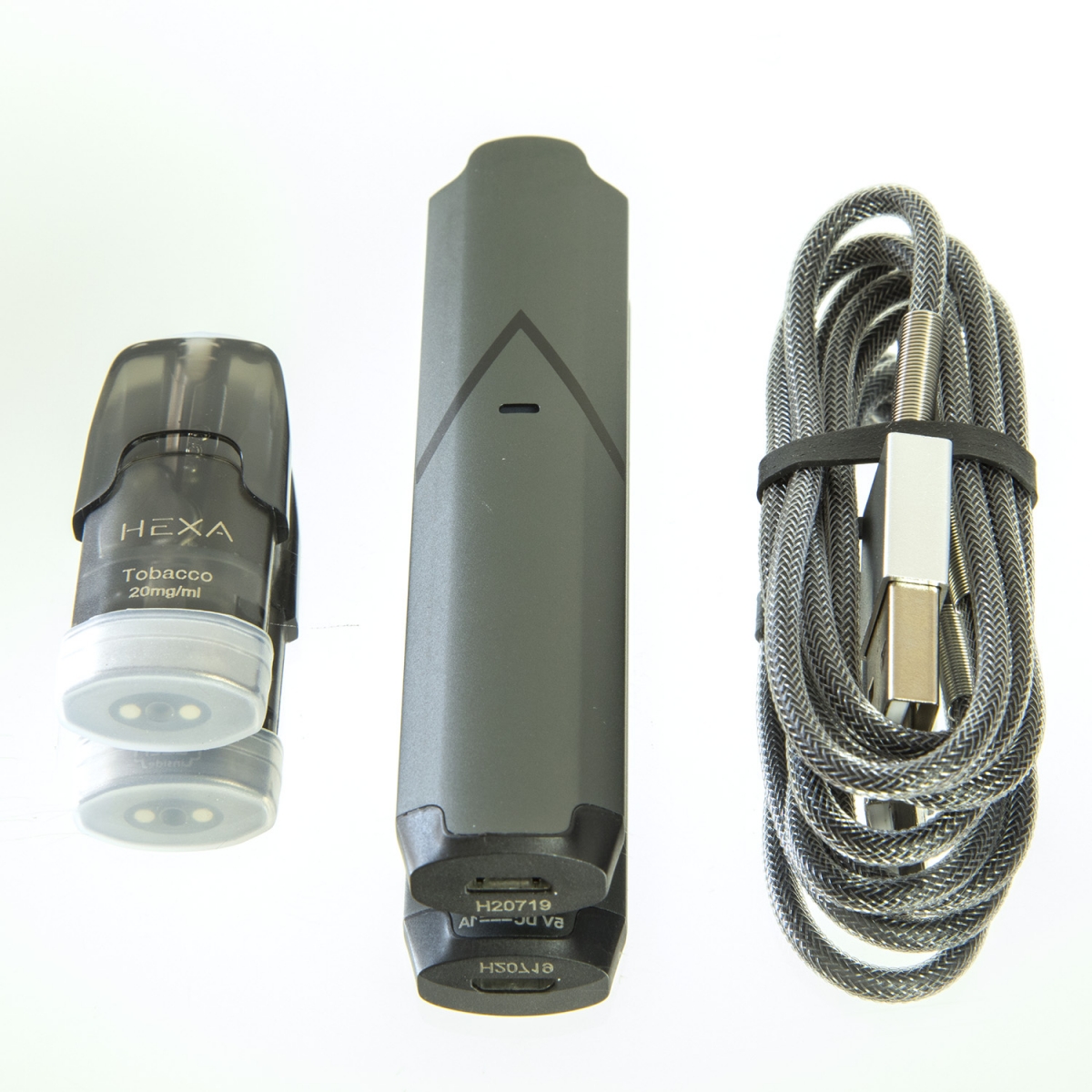 Unboxing and holding the pod for the first time feels great in the hand, ergonomic and tactile. I opened up the sterile pod pack which also has two silicone bungs which not only keeps the flavour fresh in transit but are great if you want to swap flavours and store the old one.

Remove the bungs and the pod slides into the top really smoothly and feels firm, the LED flashes to acknowledge it’s ready and that’s all there is to it, you are ready to vape – Simples! 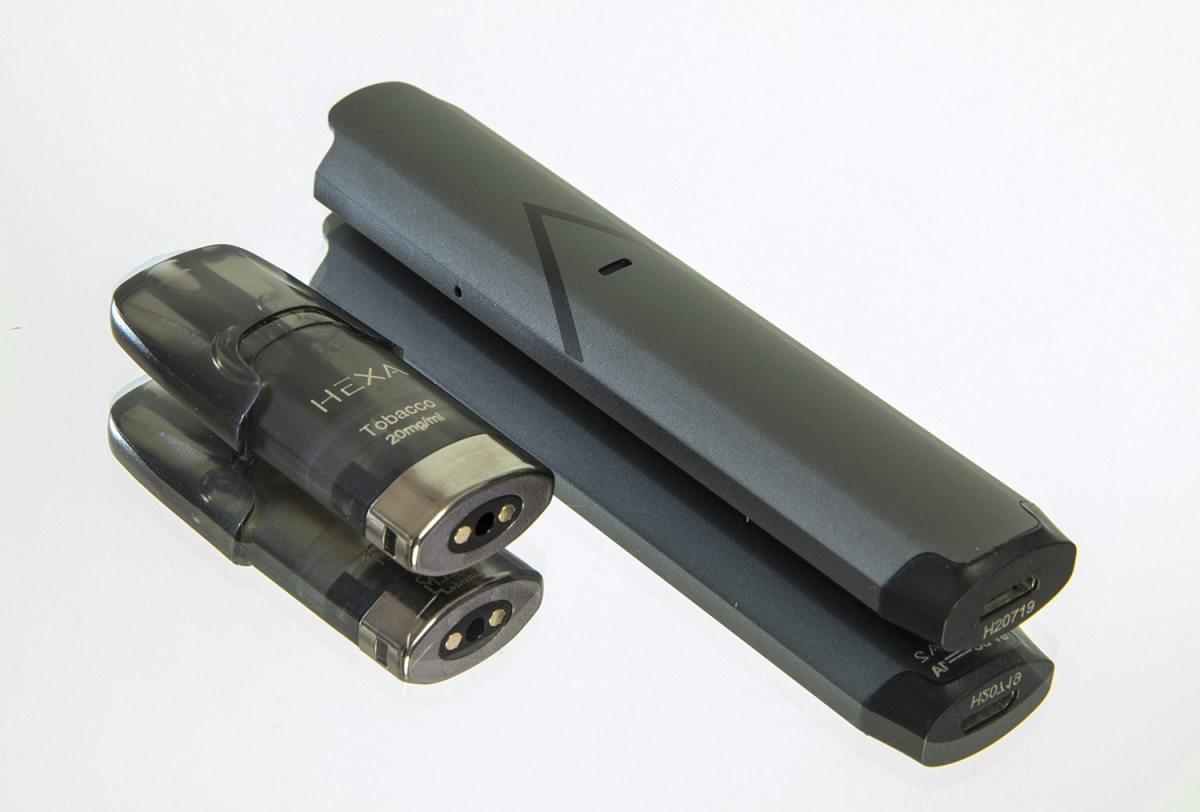 Mine came with a partial to full charge (green LED) and was ready to vape out of the box which is very handy so within literally seconds I was vaping.

When the battery needs a charge the green LED changes to red but you can still carry on vaping although it will be slightly weaker. Eventually the red LED will flash which means the battery is close to running out and will stop you from vaping so you know it is time to charge, to do this you plug in the micro USB cable into the base of the Hexa then plug into a PC, USB charger or, as I do, a portable USB power bank. Charging time is pretty fast, around 60 minutes or less if it’s just a top up before you leave the house.

I wanted to start with the tobacco pod so I could get a feel of it from a smokers perspective. Being honest, I wasn’t expecting much but holy moley this really felt like a ciggie! The draw was very tight just like a cigarette and the flavour is a really nice tobacco blend. It produces vapour pretty much the same as an ordinary cigarette. I have tried many pods in my time but this is the closest cigarette experience I have had from a vape. I even found myself holding it like a ciggie.

The nicotine strength is 20mg which is the highest level allowed with UK regulations. It is classed as high strength and is a great level for people quitting cigs. They use a blend of ‘Nic Salts’ and freebase nicotine which allows the nicotine to enter your system faster than normal eliquid nicotine so your cravings should be satisfied faster.

Battery life will depend on how often you smoked or use the vape, at first you will find you need to use it often as you get used to it but as time goes by, and your cigarette cravings lessen, you won’t need to vape so much. The battery life is relative but at first the battery life won’t last you a full day so I highly recommend using a mobile power bank to top up the charge while you are out and about (or buy a second Hexa).

The pods are 1.2 Ohms and feature FEELM Ceramic technology heating element – less spit back, dry hits and increased flavour compared to cotton wicking. They are prefilled and disposable so simply swap pods when empty, no fuss and no mess for those who don’t want the hassle of traditional refillable pods or vape equipment. 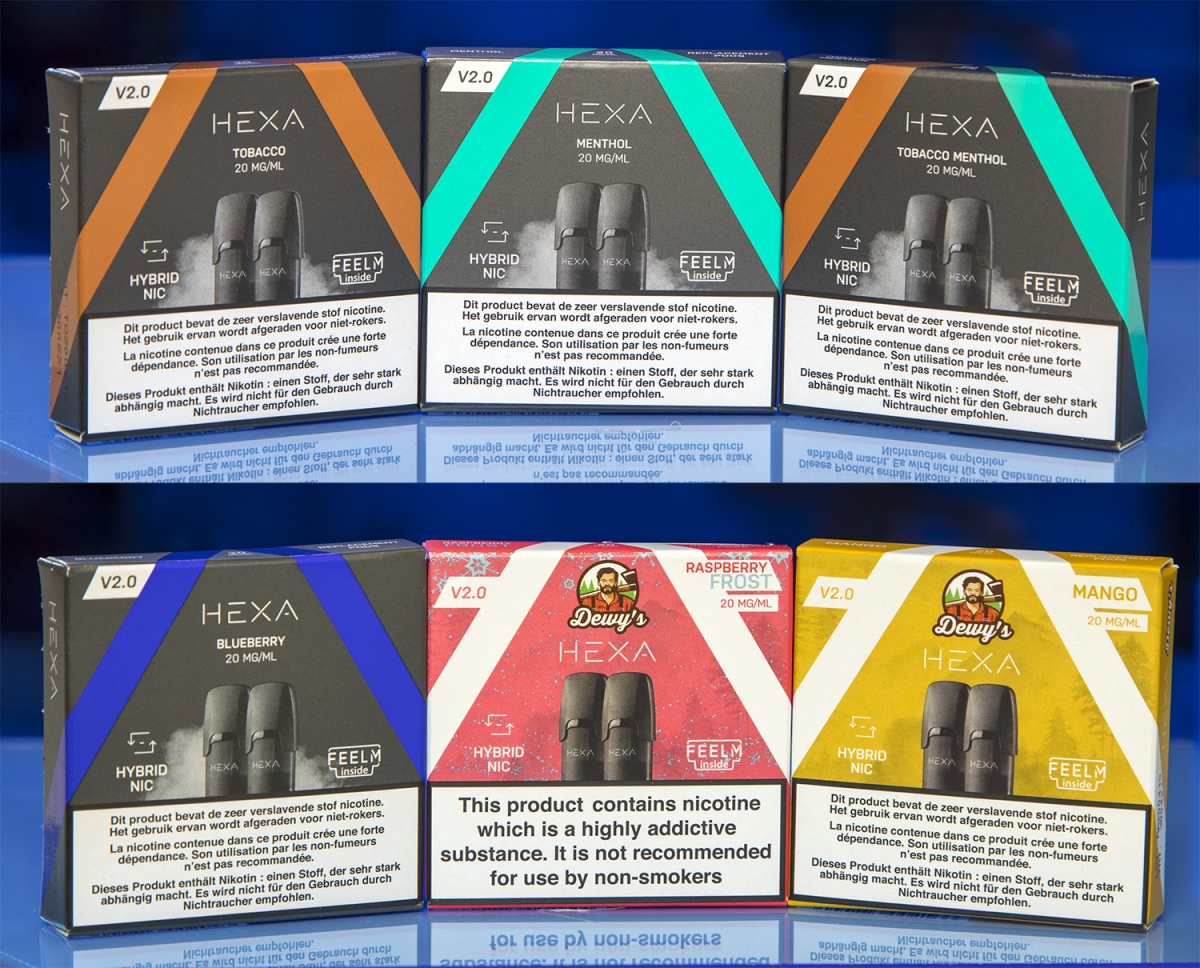 When I agreed to review the Hexa V2 I have to admit I wasn’t impressed that the pods were disposable and only held 1.7ml of eliquid, most of my previous pods I would be lucky for 2ml to last a day. To my surprise, the Hexa V2 pods lasted ages, just shy of three days of regular use and the flavour was consistent throughout. I actually had to change flavours before running out so I could get this review completed.
(This is where the silicone caps came in handy)

I tried all of the Tobacco flavours first: 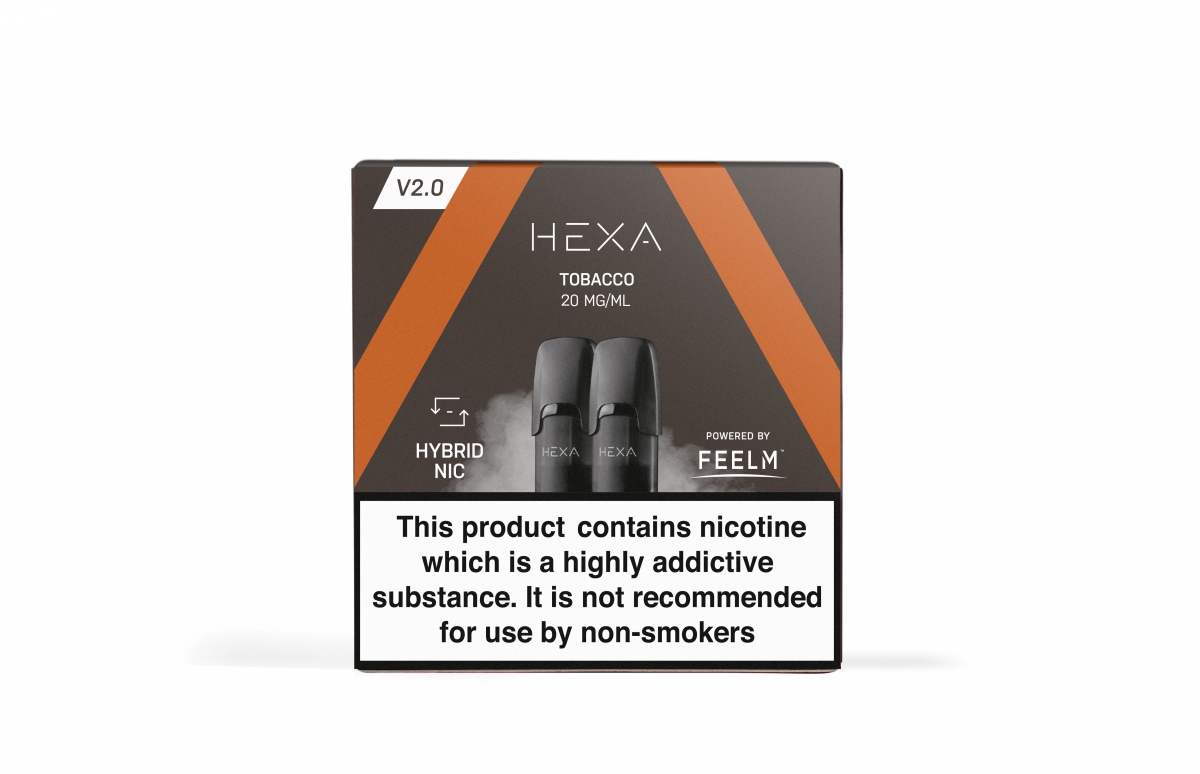 This is the flavour that comes in the starter kit and you can see why, this flavour should satisfy most smokers, I mostly smoked rollups at the end of my ‘smoking career’ but used to scrounge the odd tailor made when I was out drinking. As you will know, there are budget brands and expensive brands. This flavour I couldn’t exactly place but it was certainly an expensive brand flavour, it really felt like smoking a cigarette without the heat. The throat hit you get with a ciggie was there and it gave a satisfying exhale. I highly recommend this as your first flavour to get used to the transition. 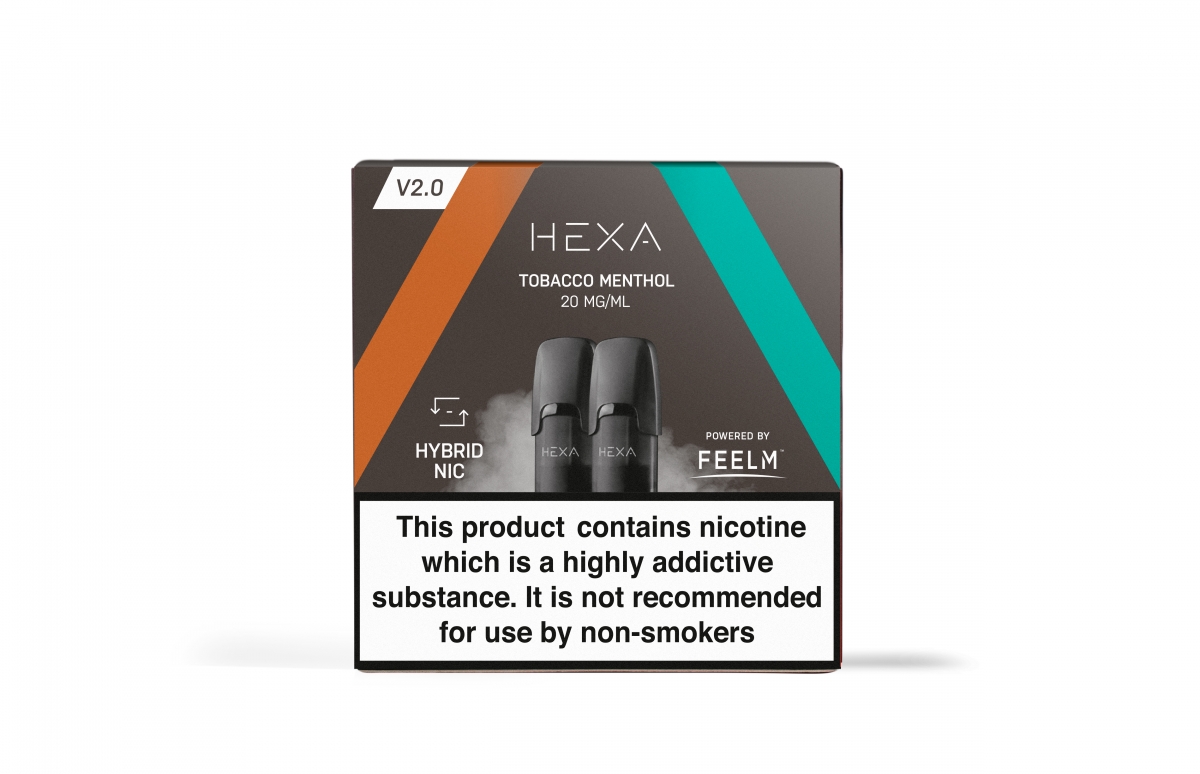 When I was a smoker I really didn’t like menthol and would only smoke them as a last resort, obviously to complete the review I had to ‘take one for the team’ and try it.

To my surprise I actually enjoyed this flavour and again they have got the blend just right. I preferred it to the real cigs so I think those that smoke this blend will again find it a good choice to transition from. The inhale is where you mostly taste the menthol and the exhale is where the tobacco flavour comes through. 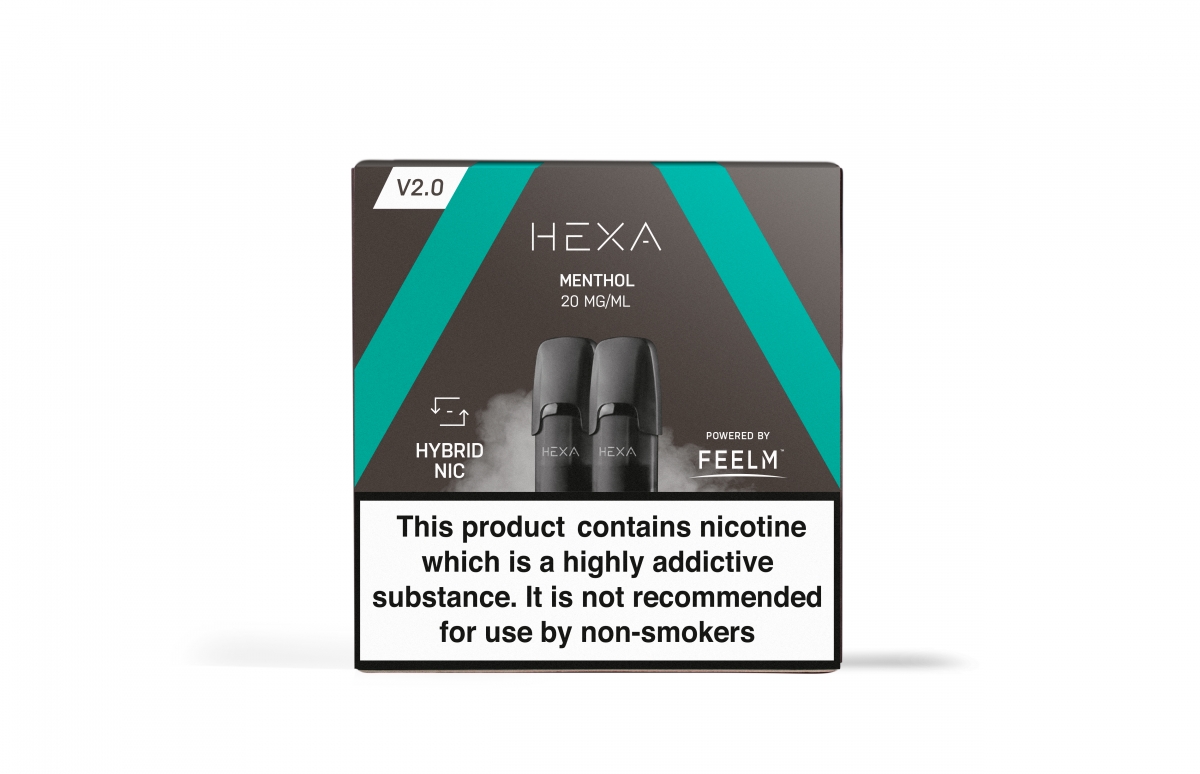 As mentioned above I am not a fan of Menthol so I was dreading this one, fortunately it wasn’t too bad for me. After the first few draws I soon got used to it and actually found it a refreshing change, the sensation you feel in your mouth, throat and sinuses stood out more than the tobacco flavours. My dread soon dissipated and I was quite happy to vape this through a full day. The inhale and exhale were very similar and it left a refreshing aftertaste. It was strange going back to another flavour after this, menthol fans will clearly enjoy this one. 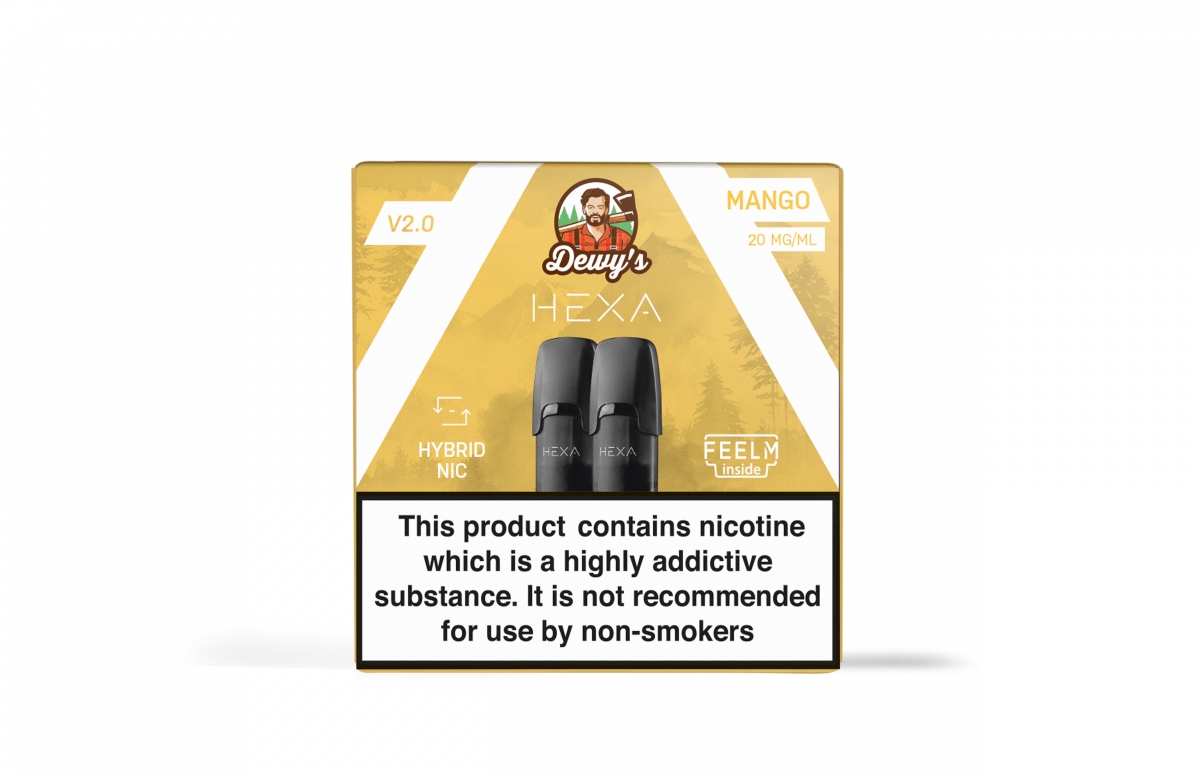 This was the first non-cigarette flavour I tried. Hexa collaborated with Dewy’s to create this flavour. After trying the tobacco pods and getting that cigarette sensation, I found going to a fruit flavour a little alien at first. My mind was playing tricks on me as obviously you didn’t get flavours like this in cigarettes. After a few draws this went away and I enjoyed it for what it was, the flavour is quite subtle and smooth. This wasn’t one of my favourites as it wasn’t as distinct as the other flavours for me. 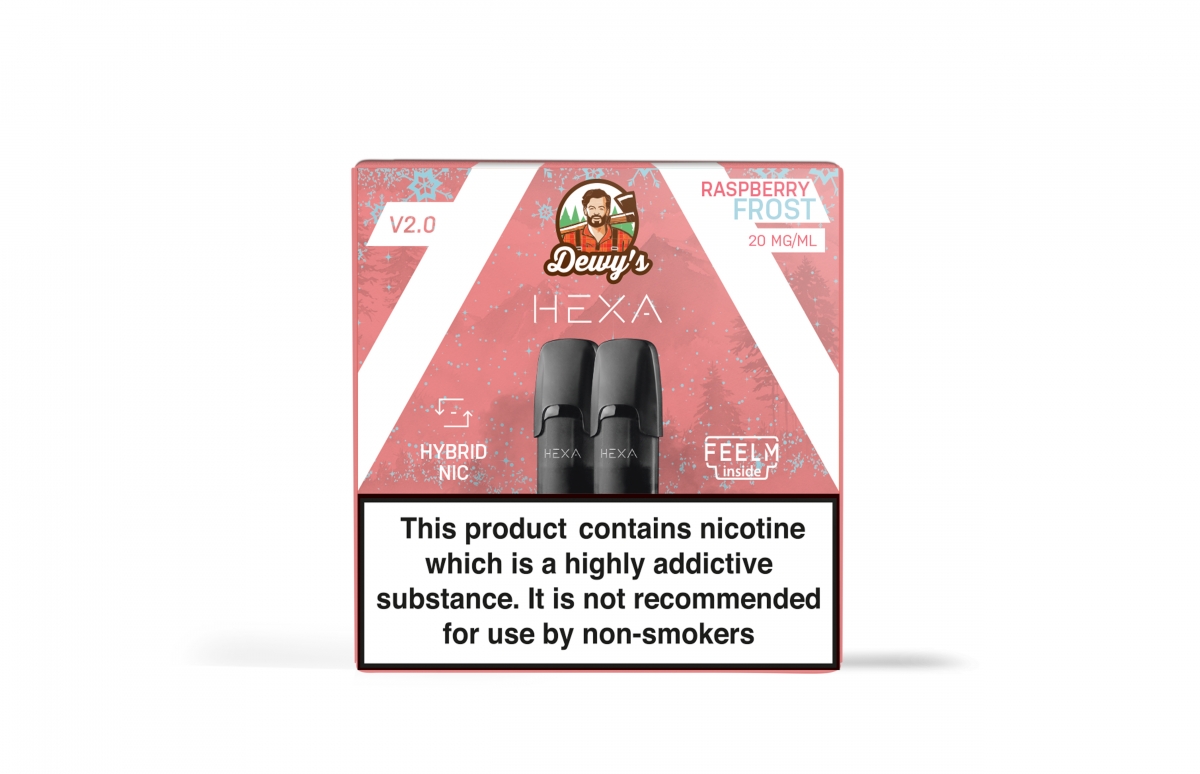 Another flavour from the Dewy’s collaboration, now this one was more like it. The flavour is lush and refreshing, one I was more than happy to vape all day. You get the raspberry on the inhale with a cool exhale also with the raspberry taste left in your mouth. This was my favourite I had tried so far though I still recommend you start off with the tobacco for quitting smoking and then move on to other flavours as you get used to vaping as it’s better to ease your cravings. 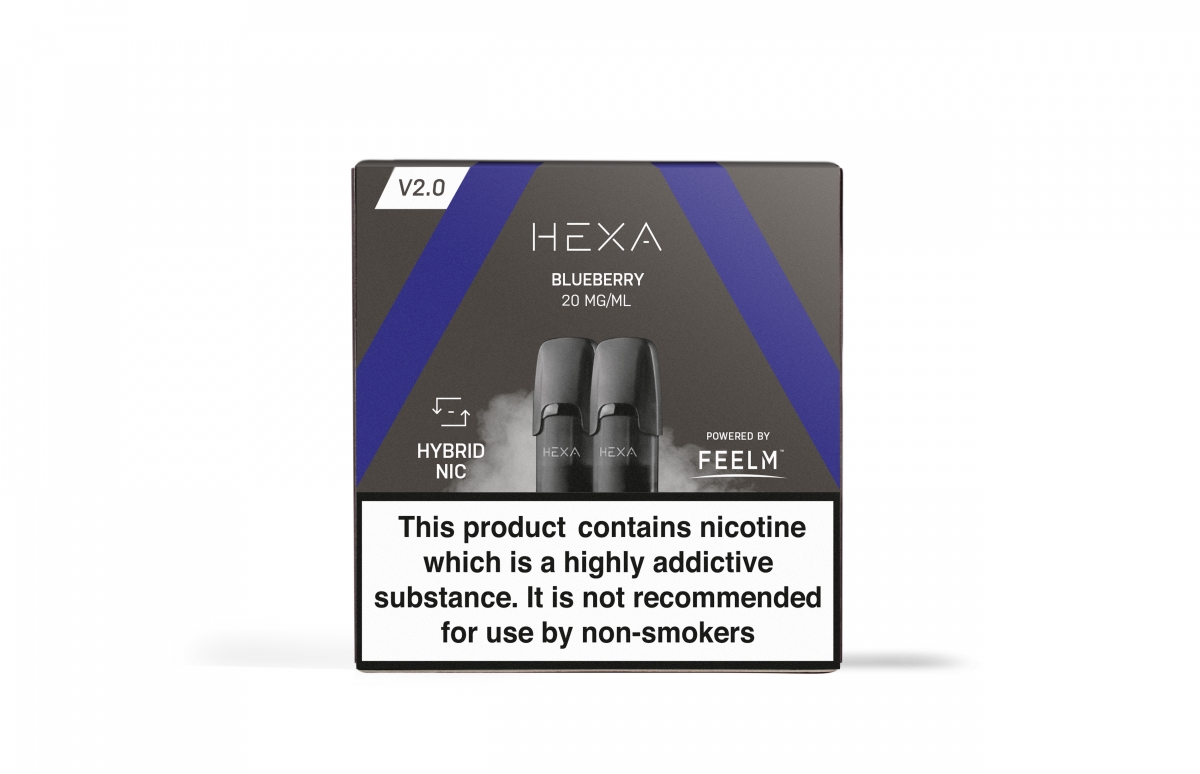 So finally on to the Blueberry, traditionally not one of my favourite flavours hence leaving it until last. It turns out I saved the best till last! From opening the packet with a welcoming nice scent of blueberry and the first vape, they have got this flavour profile balance just right. It has more flavour than the Dewy’s which now seem muted (I went back and retested them to compare). Flavour is subjective and all that but it seems to me like they don’t really need Dewy’s. Other than the tobacco, this is my second favourit. You get a nice smooth blueberry inhale, not much on the exhale but the taste is left in your mouth.

Smoking vs Hexa V2 and costing

My earlier concerns about the disposable pods only being 1.7ml paled in significance compared to smoking traditional cigarettes especially as the pods last longer than I expected. It’s tricky to quantify it as the amount people smoke varies and rollups are also a big factor in costs, but I worked out vaping with the Hexa V2 would cost me around £2.00 max per day. You will know how much you spend on ciggies.

Apologies for the cliché but you can’t put a price on the health benefits of quitting smoking and vaping is a far safer way to help you quit or replace the habit.

Vaping isn’t the magic bullet and still requires some willpower to ween yourself off the cigarettes as there are other addictive chemicals in tobacco that you also need to withdraw from, but the main nicotine fix from these 20mg pods will more than satisfy your nic-fix.

I wish the Hexa V2 had been out when I tried to quit the ciggies. With its nice tight draw and 20mg nicotine strength, this would have made the transition into vaping far less stressful. It took me ages faffing around and being fobbed of at my local vape shop until I found the right vape for me. In a perfect world it would have gone like this:

Vape Store ‘Salesman/woman’
"How can I help?"

Me
"I want to give up smoking, I don’t know where to start?"

Vape Store ‘Salesman/woman’
"Not a problem, here’s the Hexa V2 with a free Tobacco pod for £20, give that a try."

I’m not claiming it is the best out there but it certainly is one that would have helped me quit smoking a lot sooner and it is great value (especially compared to smoking). Overall this kit is an ideal starter kit without having to learn anything about vaping – plug & play style.

So there you have it, the Hexa V2 is a great tool to help you quit the stinkies. Not only that, it will also save you time trouble and money in your quest. It’s clearly aimed at new vapers with its simple plug and play pods but even after finishing this review I am still enjoying it, the novelty of that cigarette style draw hasn’t worn off. 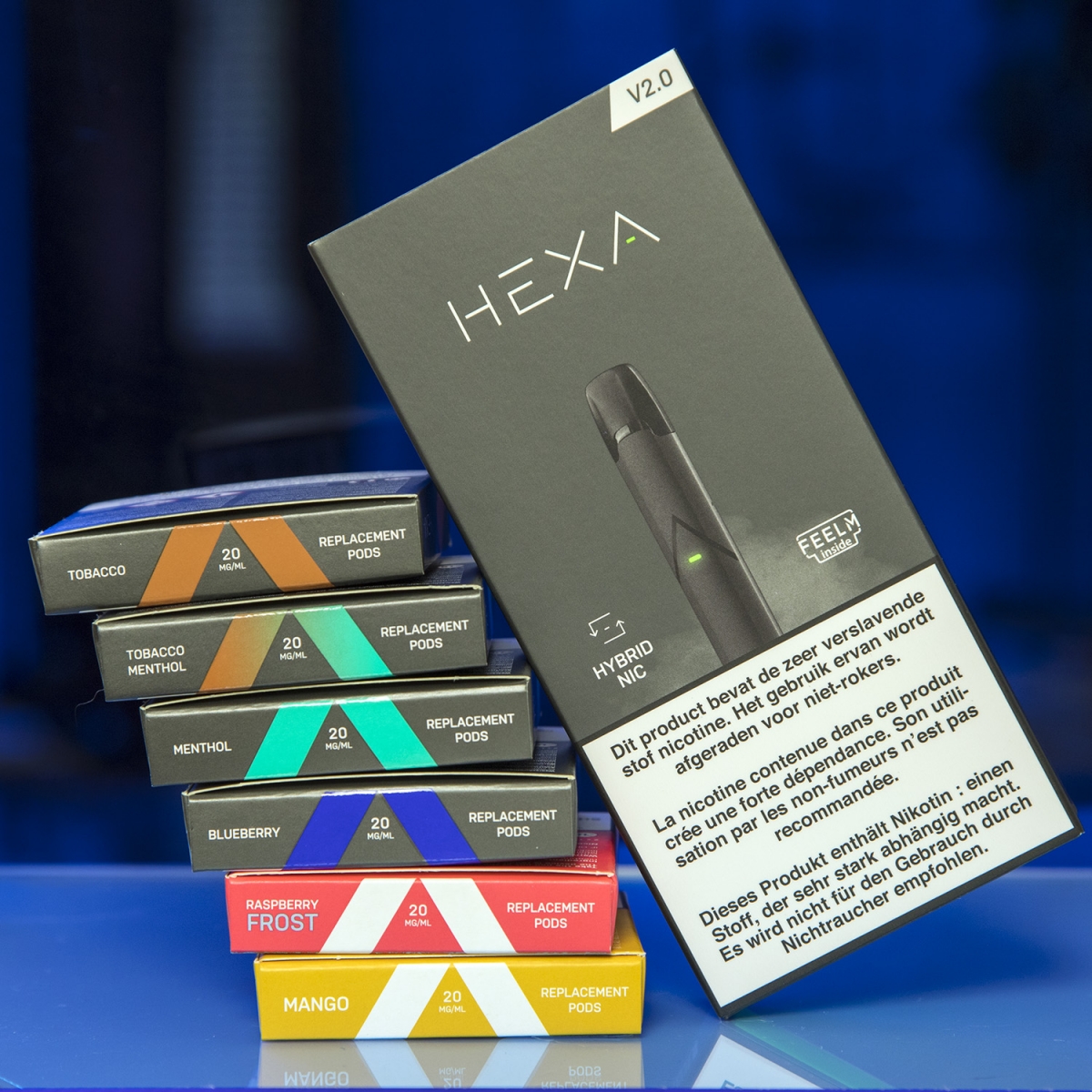