Supplied by TECC for review
https://www.theelectroniccigarette.co.uk/geekvape-ap2
£21.99 including 2 free e-liquids (10ml) 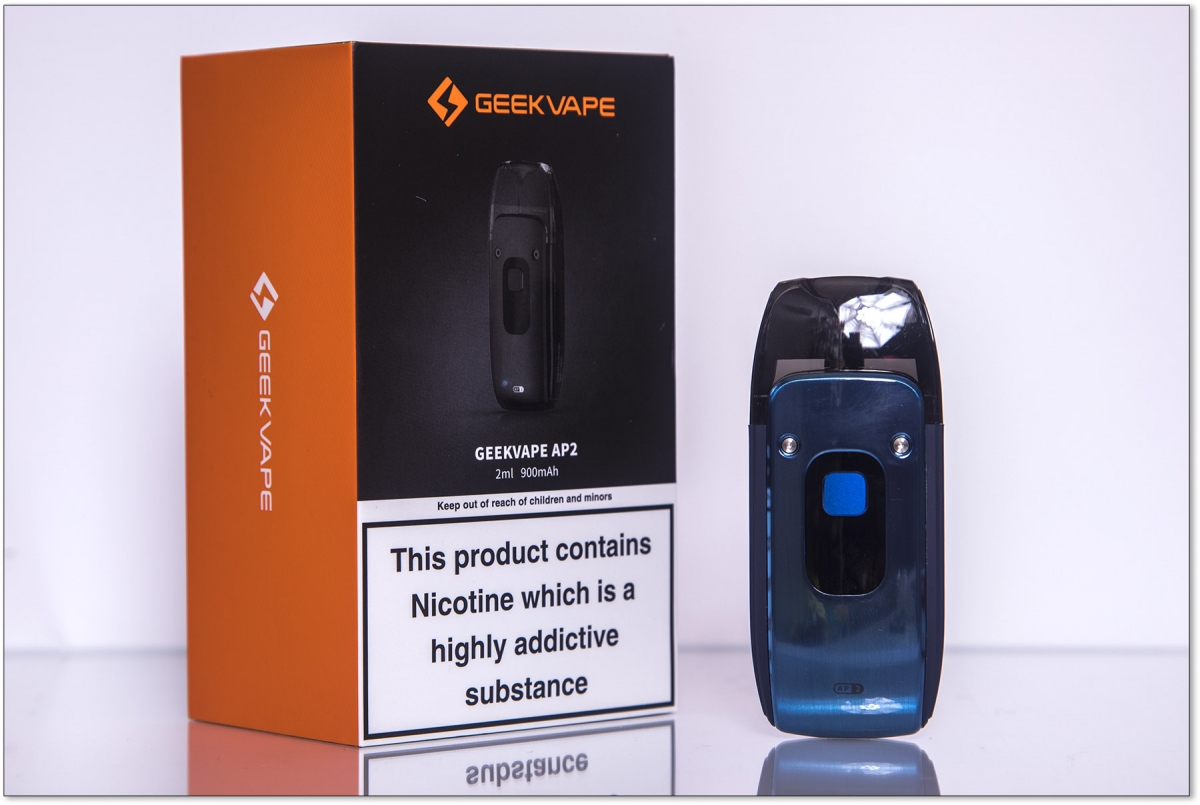 What do we have here then? Another pod from GeekVape. Why? Just because they can and think the AP2 deserves a spot in your pocket. Do we agree? Yes, pretty much, but don’t go expecting any bells and whistles or innovation. But what you will get is a solid performing and aesthetically pleasing vape that feels great in your hand.
(There was a nifty little locking feature I discovered later on)

The AP2 Pod Kit comes in the trademark orange and black three piece box which as always is VERY solid and can take the weight of Mr Postman ‘accidentally’ kicking it around, I love these boxes for keeping vape bits-n-bobs in as it’s too good to lob in the bin. 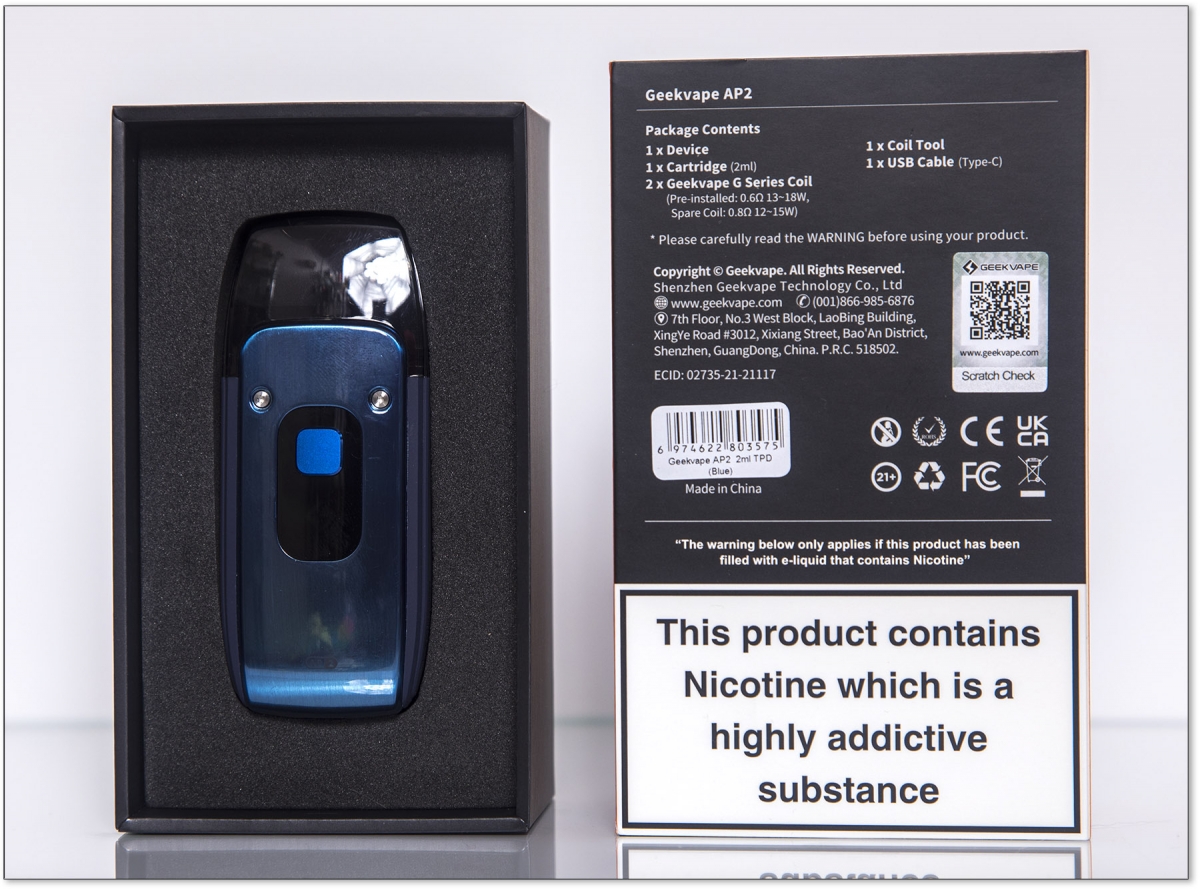 The AP2 is held in foam on the top layer, and there’s another box underneath that which holds the extras which include a USB-C cable, a second coil, a coil tool, and the documents.

Immediately I was struck by how solid and weighty the AP2 felt, weighty in a good way, and it is quite deliberate in the way it has been constructed so it should take plenty of hammer as the main body is metal and has rubber sides which act as shock absorbers and also add to the ergonomics.

The front face has a fire button and a plastic cover with a GeekVape logo shaped LED light, and the back side has a high quality leather insert. The overall shape of the AP2 isn’t designed to stand up so the leather back is the base, if that makes sense? Personally I think the styling looks like a high end car key, now where did I park my Bugatti?

The charging port is right at the bottom but I couldn’t see any water sealing even though it is IP67 waterproof rated, I’ve seen an exposed port on another waterproof mod so I can only assume that the connector is waterproof on the inside somehow.

The farty little charging cable was disappointing at first but actually turned out to be ideal for power-bank charging on the fly where shorter is much better, in fact top-up charging turned out to be my favoured way of recharging the AP2.

For a basic pod system, GeekVape have given the AP2 plenty of style and the ergonomics really stand out, it’s one of those things that feels more comfortable than it looks and the rubber sides add to the grip. The fire button is well placed for pinch firing, but I almost never used the button other than turning it on/off or changing the power level. 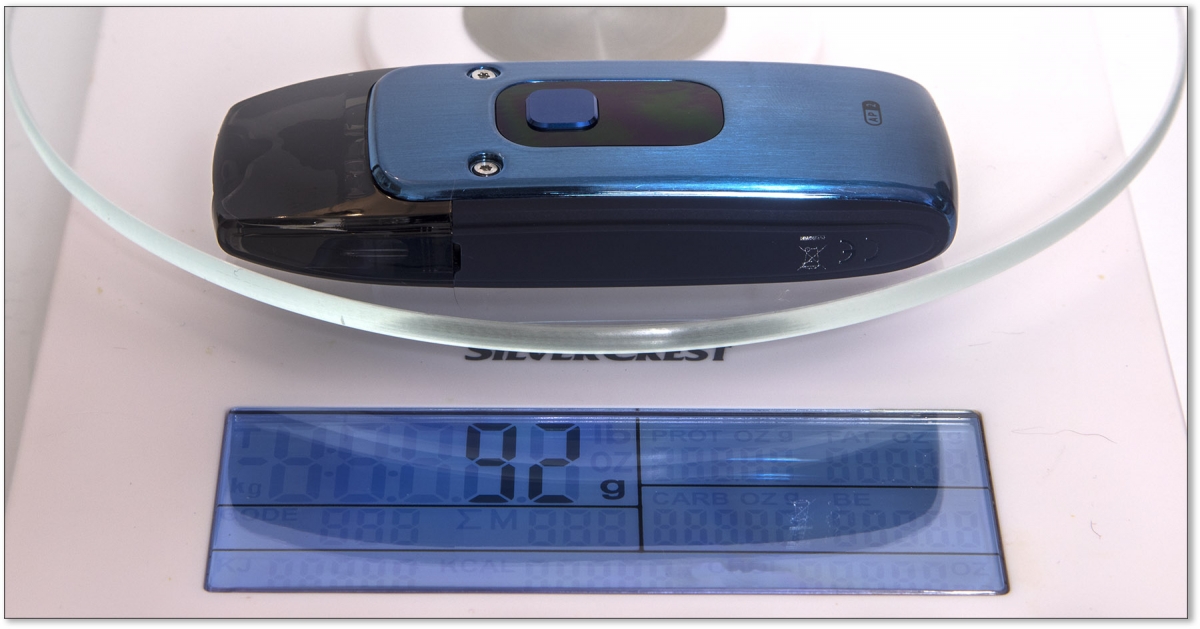 There’s not much to learn but there is a huge pro feature that’s hidden away here; 5 x Fire turns it on/off as you would expect, but once off you can still use the auto draw – NICE! This feature alone makes the AP2 a great choice as a pocket pod without the risk of accidentally firing it, and for extra safety, you can turn the AP2 completely off.

Other than turning it on/off, you can adjust the power level according to your chosen coil:

Once I had the power level selected, I just turned it off and used the auto-draw from there on, I now wish my other favourite pods had this feature. I know it’s not a game changer, but it impressed me no-end.

Part of the AP2’s appeal is the pod capacity but that has been lost to us TPD sufferers as GeekVape had to stuff a large rubber bung inside to bring it back down to 2ml. I think the unrestricted pod holds around 4ml, as a result the actual pod is quite large and the mouthpiece is one of the largest I have ever seen on a pod, forget ducks-bill this is duckbill-platypus size. 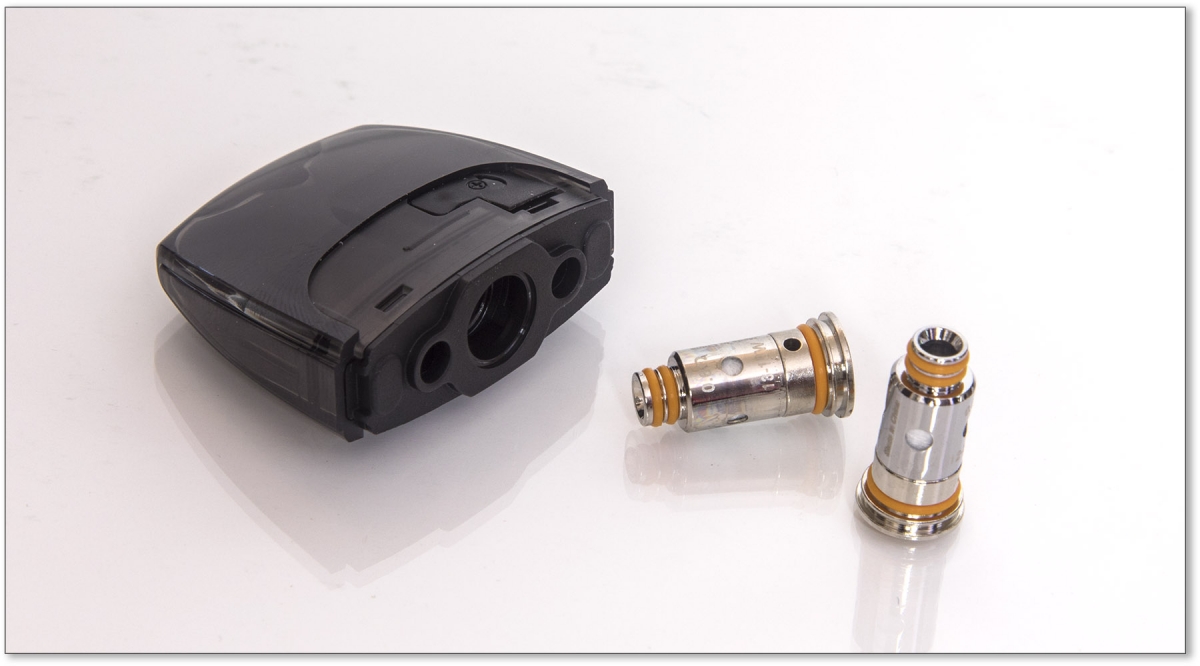 The coils that come with it are the G-Series; 0.6ohm mesh/0.8ohm mesh and are suitable for either RDL or MTL vaping, and there is a 1.2ohm mesh coil also available for lower powered MTL. They are a press fit and very easy to install as you don’t need to line up a flat edge, but they are a bit trickier to remove without using the provided tool. 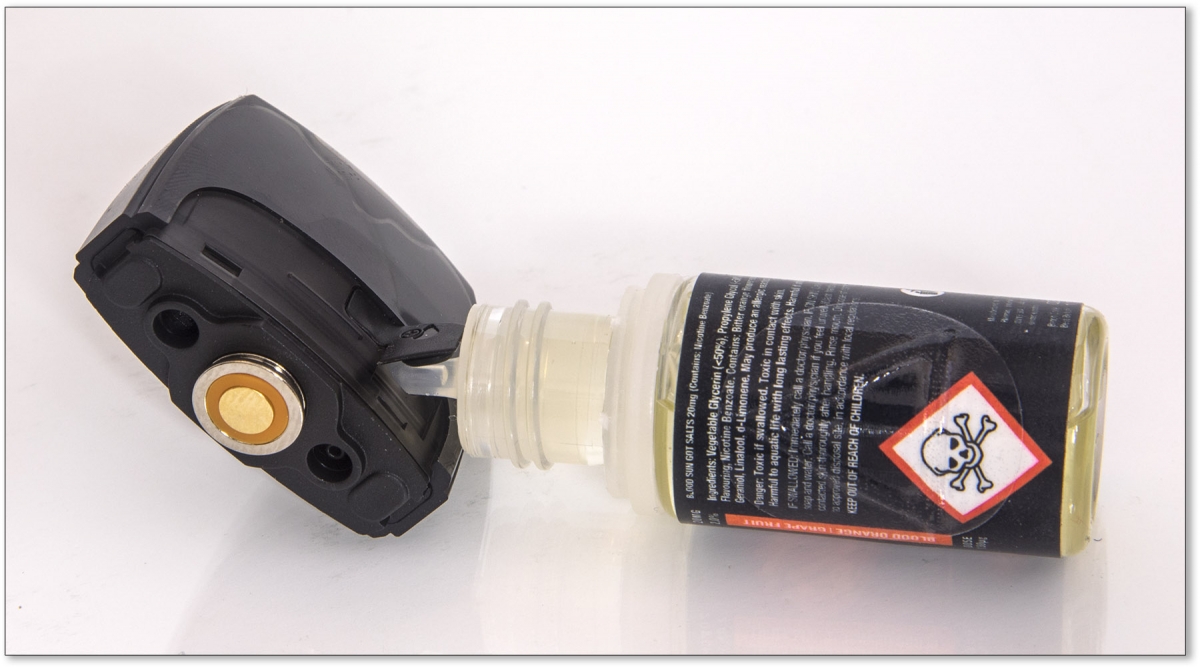 Filling is achieved via the little silicone bung on one side, this is a bit fiddly and not one of the AP2’s strongest features, but I did find it pretty mess free, and it is easy to see your juice level, the unrestricted pod would have been even better.

The advertising does mention adjustable airflow but in reality it is just two options; MTL and RDL which is achieved by rotating the pod 180 degrees when fitting. You can see the base of the pod has a smaller chamber for MTL which lines up with the airflow pin in the battery but it’s actually easier to just shove it in and see which round way suits you (or as she said, suck it and see!), I was surprised how effective this was in both positions, MTL was about right and RDL was certainly on the restrictive side.

The pod and coils design offers leak protection as the airflow is diverted from the base upwards and I have had zero leaking or condensation issues so far, you may experience a little flooding but tapping it upside down into a tissue should clear this.

For anyone familiar with GeekVape’s Boost coils, then you can expect pretty much the same excellent flavour. Both coils perform really well and last a long time, the subtle difference between the 0.6ohm and the 0.8ohm will be down to your preferences as both work well in MTL or RDL, I favoured the 0.8ohm for MTL though as it uses less power and you get more battery life.

The flavour from the coils really adds to the overall experience of the AP2. Simply put, it vapes as good as it looks. I’m a fussy sod when it comes to a tight enough MTL draw and the AP2 satisfied me, but the mouthpiece wasn’t quite to my taste as it was just too large and felt more suited to DL vaping. To be fair, it bothered me more when I first started using it but once the habit had kicked in, it bothered me less.

It’s only when you go back to a ‘normal’ pod that the difference becomes more obvious, here it is next to my all-time favourite DRAG Nano pod and the AP2’s mouthpiece is almost twice as large. I think the term ‘Gobpiece’ suits it more, but don’t let it put you off too much. The more I used it, the more I actually liked it as it requires less of a lip pucker to seal and draw, I hope that makes sense? Anyway I ended up liking it on this particular pod and what I thought would be a con soon faded into a pro. 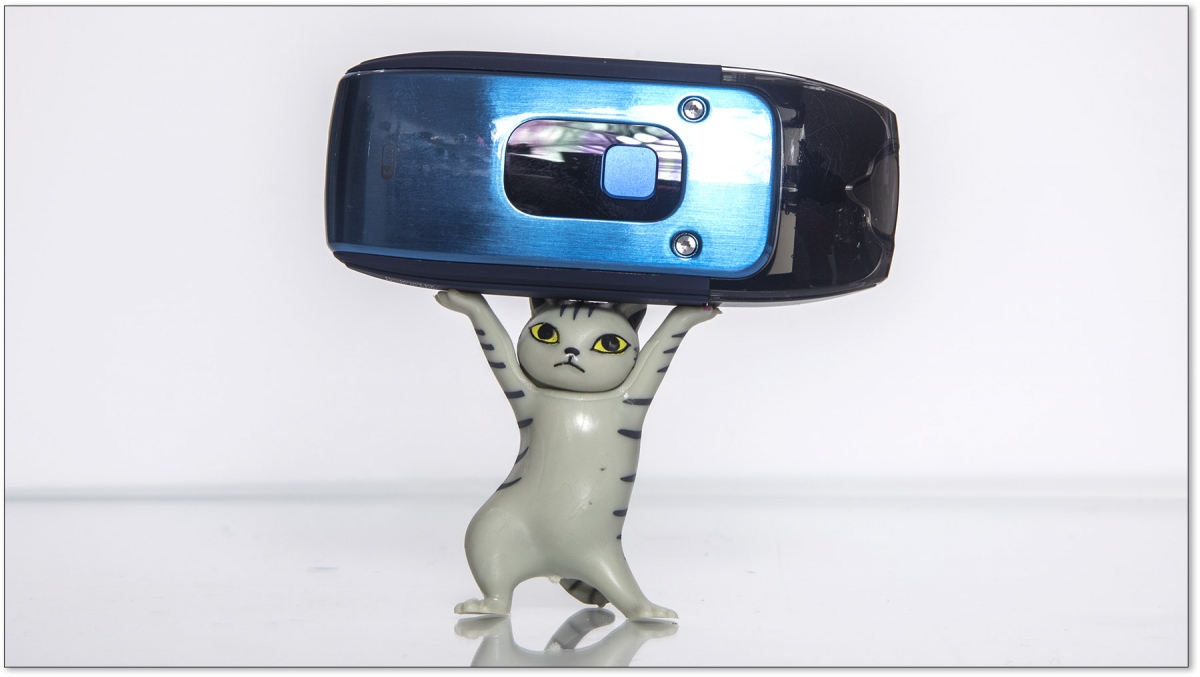 The auto-draw performed flawlessly, and the fire button lock proved to be invaluable. I really enjoyed using this pod kit as it felt great in your hand and the vape quality was superb. The battery life was pretty good and lasted me around 4ml of e-liquid using the 0.8ohm coil. 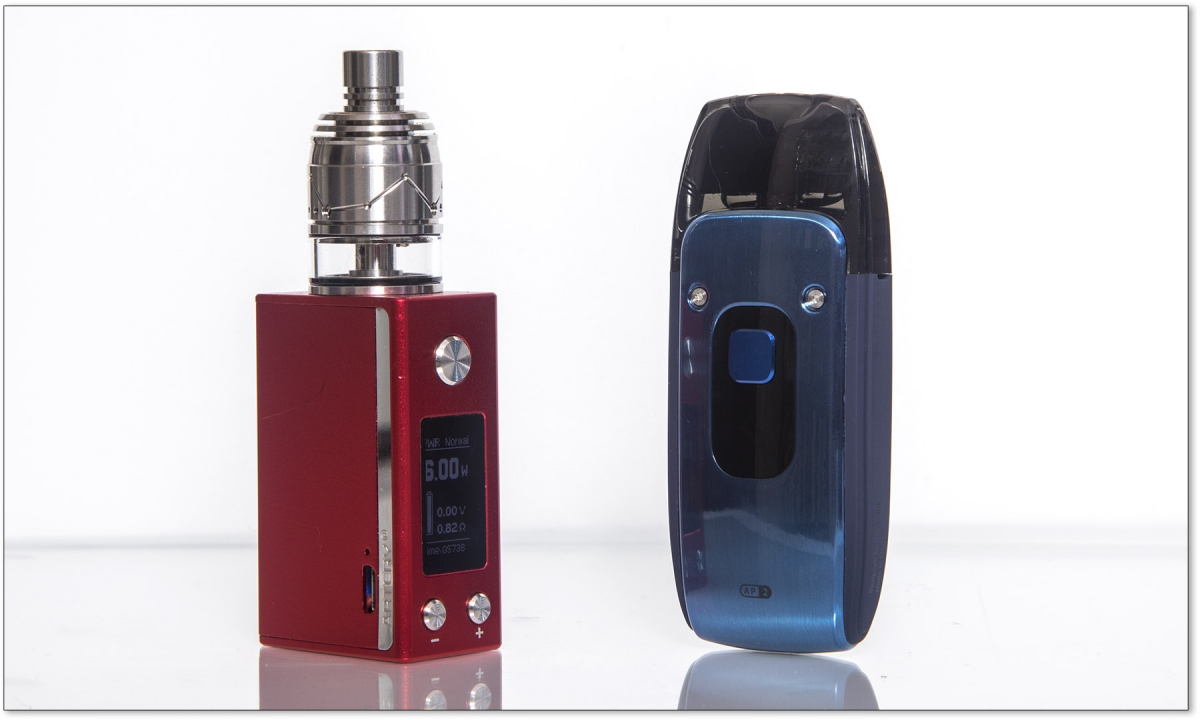 The size was a bit of a strange experience, when I first got the AP2 in my hand I thought it was quite large compared to a lot of pods I had tried but it was not the largest pod I had tried either, it is much smaller than the GeekVape H45. Here it is next to my smallest mod and tank and it’s actually heavier, BUT and it’s a big but….the AP2 is just so much better in the hand and in your pocket, the ergonomics made it feel less obtrusive and just right as a compact vape.

With far too much choice out there when it comes to pods, I was surprised how much the AP2 impressed me. There was nothing game-changing as such, the locking feature was handy but the rest was nothing new, and you could say it’s ‘just another f**king pod’, but it’s more than that as the vape quality is among the best. The ergonomics are superb, and the style is different enough to stand out. The 92grams weight is certainly heavier than you would expect, but this was clearly deliberate to make it feel more substantial and it was a pro for me.

As I’m approaching the pros and cons, I am appreciating the AP2 even more. There are two ‘features’ that might put some buyers off; 92g weight and the large mouthpiece, but equally those two things may appeal to other buyers (like myself) and I can’t class them as cons.

Though I managed to find a couple of cons, don’t let them put you off as the pros far outweigh them (pun intended).

It’s really nice to see that ‘just another pod’ can still stand out as something a bit special, and I feel that the AP2 is that little bit special. It feels high end like a key for a Lamborghini or something, and it delivers high end vape quality. Consider if the weight or mouthpiece will put you off, if the answer is ‘no’ then you’re in for a treat.

Score 9/10 – The best GeekVape Pod I have tried