After recently taking a look at the MaxPod kit, which I’m still thoroughly enjoying, FreeMax asked if I’d also be interested in their next release featuring “the world's first double mesh pod”. Intrigued by what exactly they meant as little other information was available at the time, and thinking it might offer up something new and different from the dozens of other pod kits already on the market, I replied with a resounding “yes please”. So have they struck gold again with the AutoPod50? Read on and find out. 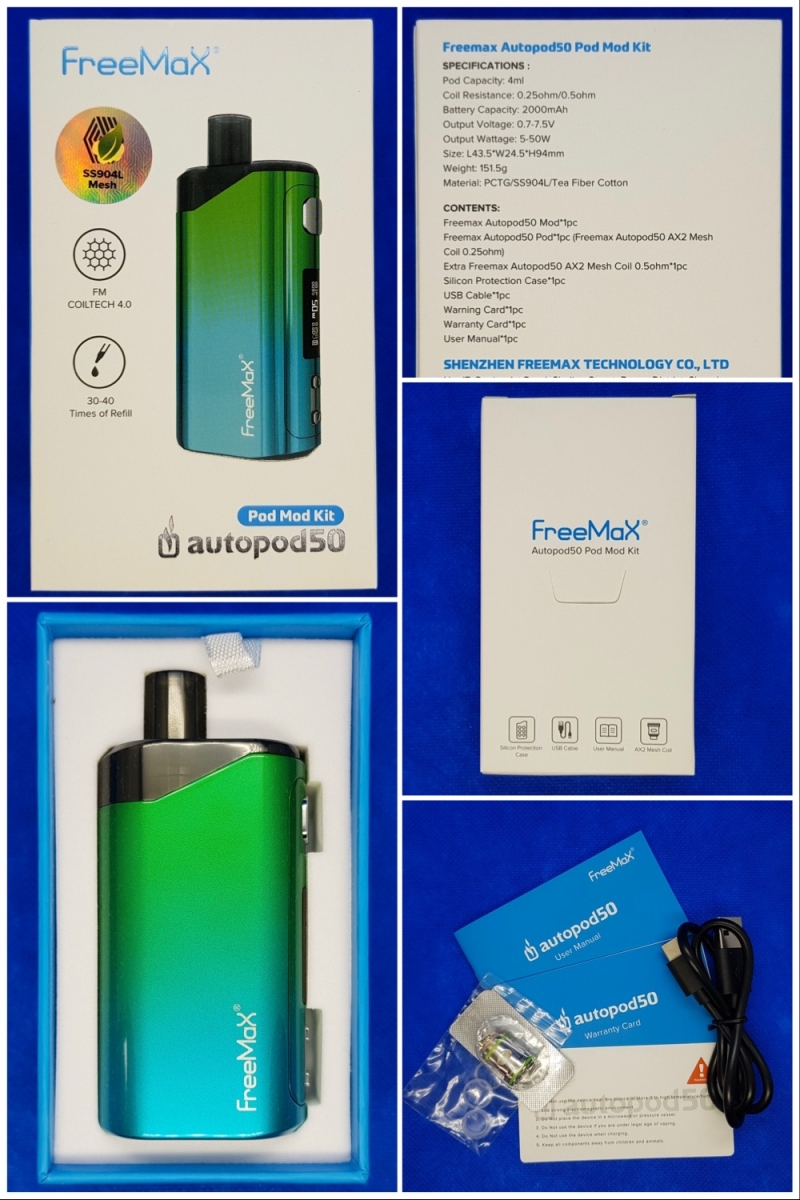 The AutoPod50 kit comes in typical FreeMax packaging with an outer sleeve featuring a prominent photo of the device in your chosen colour plus some bullet point information on the front, with a more detailed list of specifications and kit contents on the back, along with the usual scratch ‘n’ sniff authentication code. Removing the outer sleeve reveals a blue box with an “AutoPod50” logo in silver. The box, mercifully, has convenient finger cut outs on the side which means it’s easy to open revealing the kit itself firmly nestled in a foam tray. Underneath this is a smaller box with user manuals, a usb-c charge cable, and a spare coil, along with some spare o-rings. There’s supposed to be a silicone case included in this smaller box as well but sadly this was absent in mine because this is an early test production run sent out to reviewers, but FreeMax have told me it should be included in the final retail packaging.

I have to say that FreeMax are offering the AutoPod50 in a fairly wide range of colours, six in total, and they sent over two for the review: “green”, which actually has a gradual fade from an emerald green at the top to a cyan at the bottom, and “blue-yellow” which fades from blue to yellow. They’re both stunners but I settled on using the slightly more subdued blue-green combo. 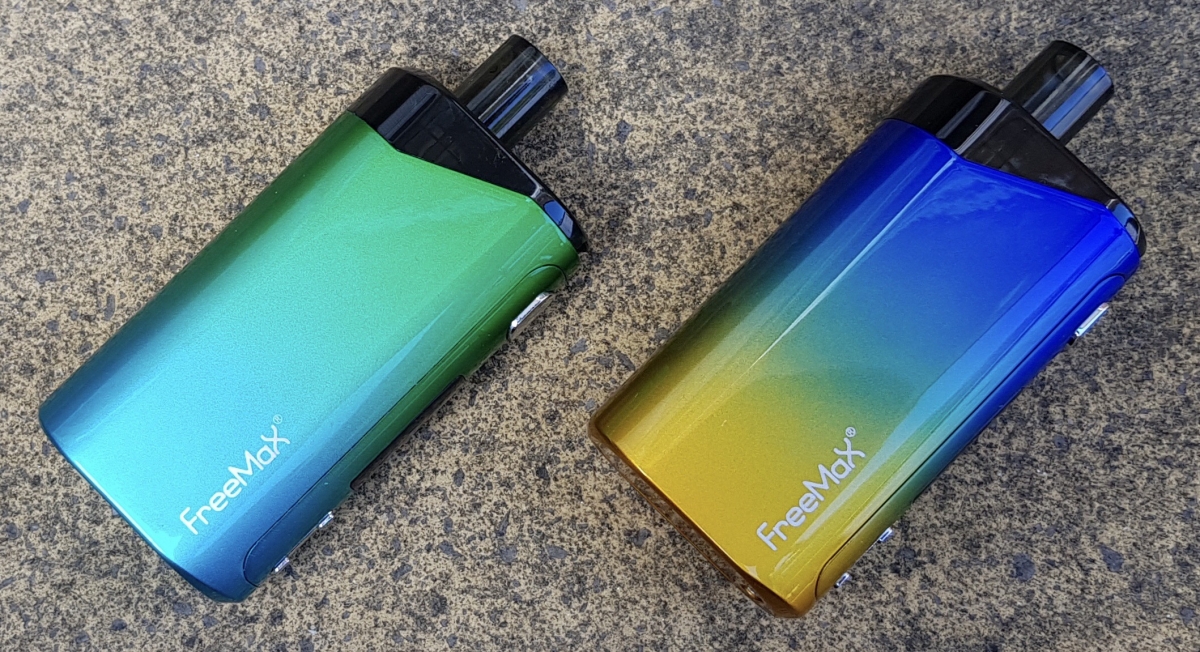 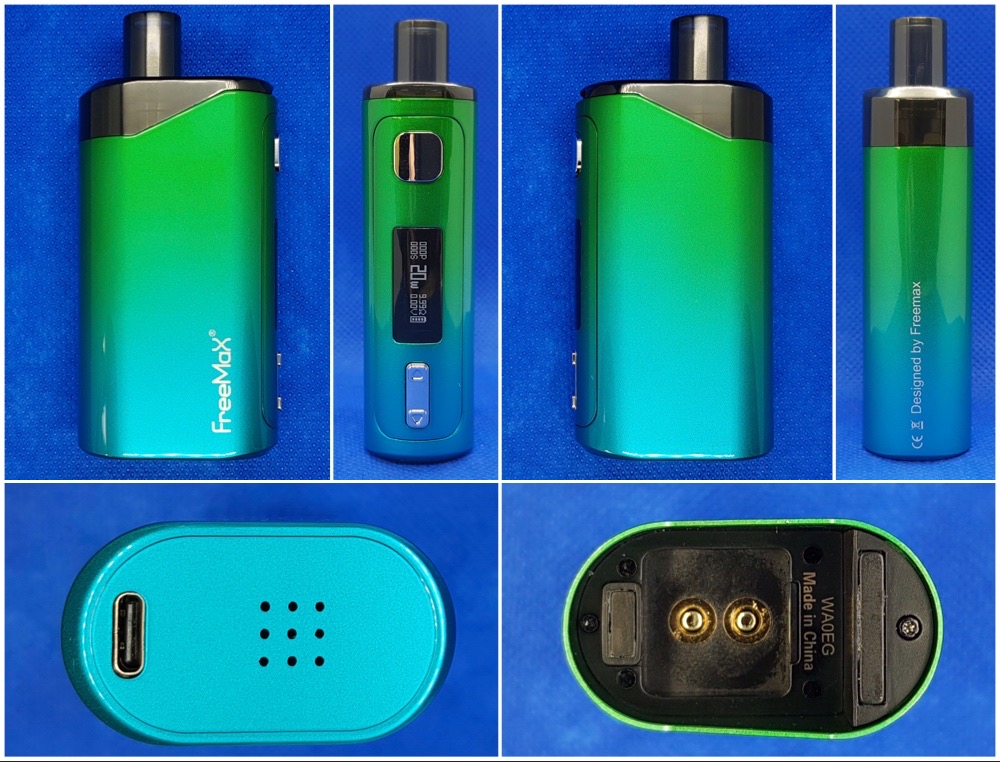 Looking around the kit, the main chassis has a metal alloy construction. The front plate and buttons are plastic though with a clear, if slightly small, screen in between the buttons. There’s no button rattle, and the buttons all have a nice positive feel to them, although I do detect a small amount of movement in the plastic panel when I press the fire button and there is indeed a little side to side wiggle on the panel. There’s minimal branding on the kit apart from the FreeMax logo on one side which really allows those paint jobs to shine (final retail versions appear to have a similar sized “AutoPod50” logo on the opposite side) and, despite my initial fears with its super shiny finish, it’s not too much of a fingerprint magnet. It feels nicely weighed and comfortable to hold thanks to its rounded edges, but I did find that trigger firing was preferable as it’s all too easy to accidentally block the concealed airflow which is just above the fire button when thumb firing.

On the bottom of the battery section, there’s some battery venting and a usb-c charge port. It’s a shame this isn’t on the side but I suspect it’s been done to retain the clean overall aesthetic of the kit so it hasn’t bothered me in use. The AutoPod50 features 2 amp fast charging with a quoted 2000mAh capacity and 80 minute charge time, and my tests bore this out with a charging rate around 1.76 amps and a final capacity of 2004 mAh achieved in just 1 hour and 16 minutes (76minutes). FreeMax should be commended for not overstating battery capacity, as so frequently happens, and this gives the AutoPod50 excellent battery life for a pod system.

Up top, the pod is held in place with three strong magnets so there should be no fear of losing pods in pockets etc. And there are two very beefy spring loaded contact pins for the coil which definitely look like they’re built to last. I’ve had no leaking or condensation build up but as always I’d advise you check this area regularly just in case to prevent liquid making its way to the innards.

Menu operation is simple with the usual five clicks on/off, and three clicks gets you to a sub menu where you can call up additional information like remaining battery voltage and reset the puff counter etc. The only mode available is wattage, which is adjustable from 5 watts to 50 watts in 1 watt increments, there’s no round robin but adjustment is quick enough in any case. Pressing the up and down buttons together will lock the power adjustment but still leave the power button functional, I found in practice this was more of a hindrance as the pod will suggest a wattage depending on the coil resistance and frequently resets itself when you remove the pod which then leaves you at the wrong wattage with locked buttons! The only undocumented shortcut I found was pressing fire and down to flip the screen.

Despite the straightforward simple menu, you shouldn’t be left with the impression that this is a cut down budget board like you find in pod systems from Smok or Voopoo though. Most of those kits have no boost capabilities which means they can only deliver the currently available voltage from the battery which can lead to reduction in vape quality as your battery level drops below the voltage needed to achieve your selected wattage. Not so with the AutoPod50, which utilizes a true buck/boost DC-DC converter design which allows you to vape at the full 50W with only 25% of the battery power left for example, and leads to a much more consistent vape. As you would expect from a modern kit, there’s also a multitude of safety protections built into the AutoPod50 as well for added peace of mind. 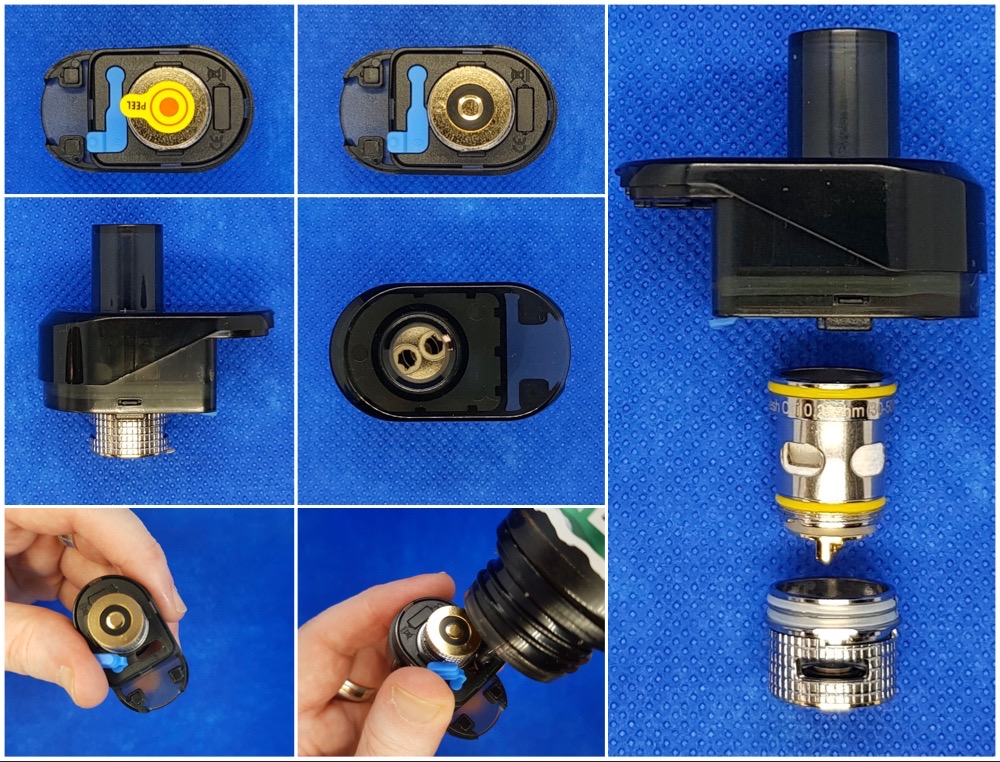 The pod is constructed from the now standard PCTG, which is resistant to most eliquids, and holds 4ml (2ml for TPD regions) with a familiar pod/coil/afc arrangement. Coils need to first be screwed into the afc base and this assembly is then press fit from the bottom. The pod has an integrated drip tip with a 8mm inner bore, allowing you to stare right down into the coil and I found it to be very comfortable in use. What wasn’t quite as convenient is the positioning of the fill bung on the underside of the pod right next to the afc. This means that it can be awkward to fill, especially with larger bottles, and I’d recommend making sure you have the tip of your eliquid bottle as far to the outer edge as possible to avoid potential airlocks which I have experienced several times! The pod also has a dark smoked finish which looks great but means it’s not always that easy to see how much eliquid you have remaining. 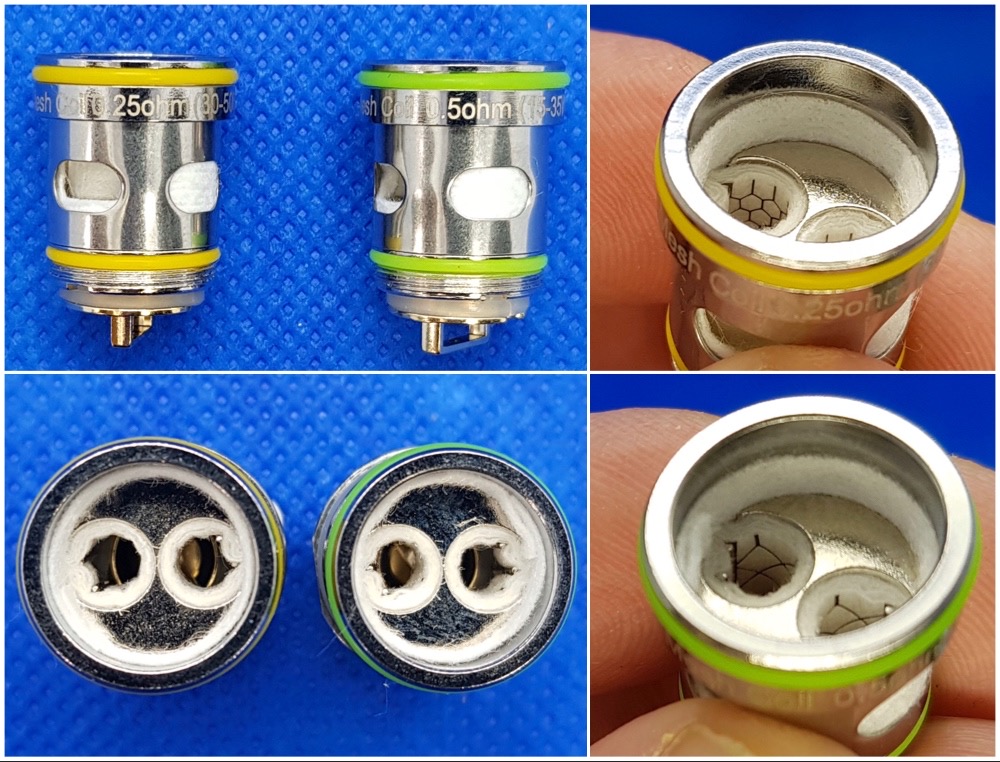 Now we move onto the AutoPod50’s party piece and main selling point, the coils. Both of the included coils are of the dual coil variety, a first for a pod system, and feature FreeMax’s latest Coiltech 4.0 technology with stainless steel 904L mesh, another first I believe, with tea-fibre wicking material. More innovations from FreeMax and a clear evolution from their three years development cycle with mesh coil technologies. There’s a 0.25Ω coil with yellow o-rings, and a 0.5Ω coil with green o-rings. As you can see from the photo above, they have very different styles of mesh as well so I was very interested to see how these would perform.

The 0.25Ω coil came preinstalled in the pod so I took the hint and tried that first. It’s rated for 30 to 50 watts with the suggested “best” at 40 watts. Once everything was primed and I popped the tank on the mod, it automatically selected 30 watts. This is a great feature for beginners but can grate with experienced users as I quickly found it would default back to 30 watts if you removed the tank to check eliquid levels or to adjust the airflow for example. The coil gave great flavour even at 30 watts with the airflow ⅔ closed. I found it was best at about 35 watts with around ½ airflow but it definitely starts to struggle beyond 40W and verges on a dry hit at 45W. Stick to that 30 to 40 watt range and dial in your preferred airflow though, and it’s an outstanding restricted direct lung vape with absolutely bags of flavour. Thanks to the true buck/boost design of the board, I only noticed a slight drop in performance right towards the end of the battery life as well.

The 0.5Ω coil has a suggested range from 15 to 35 watts with the “best” 30. The AutoPod50 defaulted to 20 watts with this coil, but I found this to be a slightly subdued vape which improved in the 25 to 30 watt range with about ½ airflow. For me this coil seemed to perform best at the 30 watt mark but started to struggle beyond 35 watts. Flavour wise, I’d say it’s not quite as good as the 0.25Ω coil which would be my first choice, but there’s not a wide difference in performance between the two.

FreeMax claims that the coils have an expected lifespan of 40 to 80 refills depending upon the eliquid you’re using. Whilst that’s a little difficult to test in the time available to write the review, I can say that I’ve had around 25 tanks worth through the 0.25Ω coil so far and although the cotton is slightly discoloured, the flavour is still very good and I’ve only swapped it out to test the 0.5Ω coil.

The AutoPod50 is quite clearly aimed squarely at the restricted direct lung market so if you’re a strictly mouth to lung vaper, then this will hold little interest for you, but looking at the the marketplace sector that FreeMax is aiming for with the AutoPod50, then it’s easily able to equal, or in most cases beat, anything available from Smok, Voopoo, or Artery. Great flavour from the coils along with decent battery life from the 2000mAh internal battery and rapid charging all in a fairly compact package make this a pocket friendly, all day vape which has hardly left my hand since I received it. This comes highly recommended from me.

FreeMax’s 2020 lineup so far is shaping up to be the benchmark that other manufacturers are going to have to match, and I’m looking forward to their next product which I know isn’t all that far down the line. 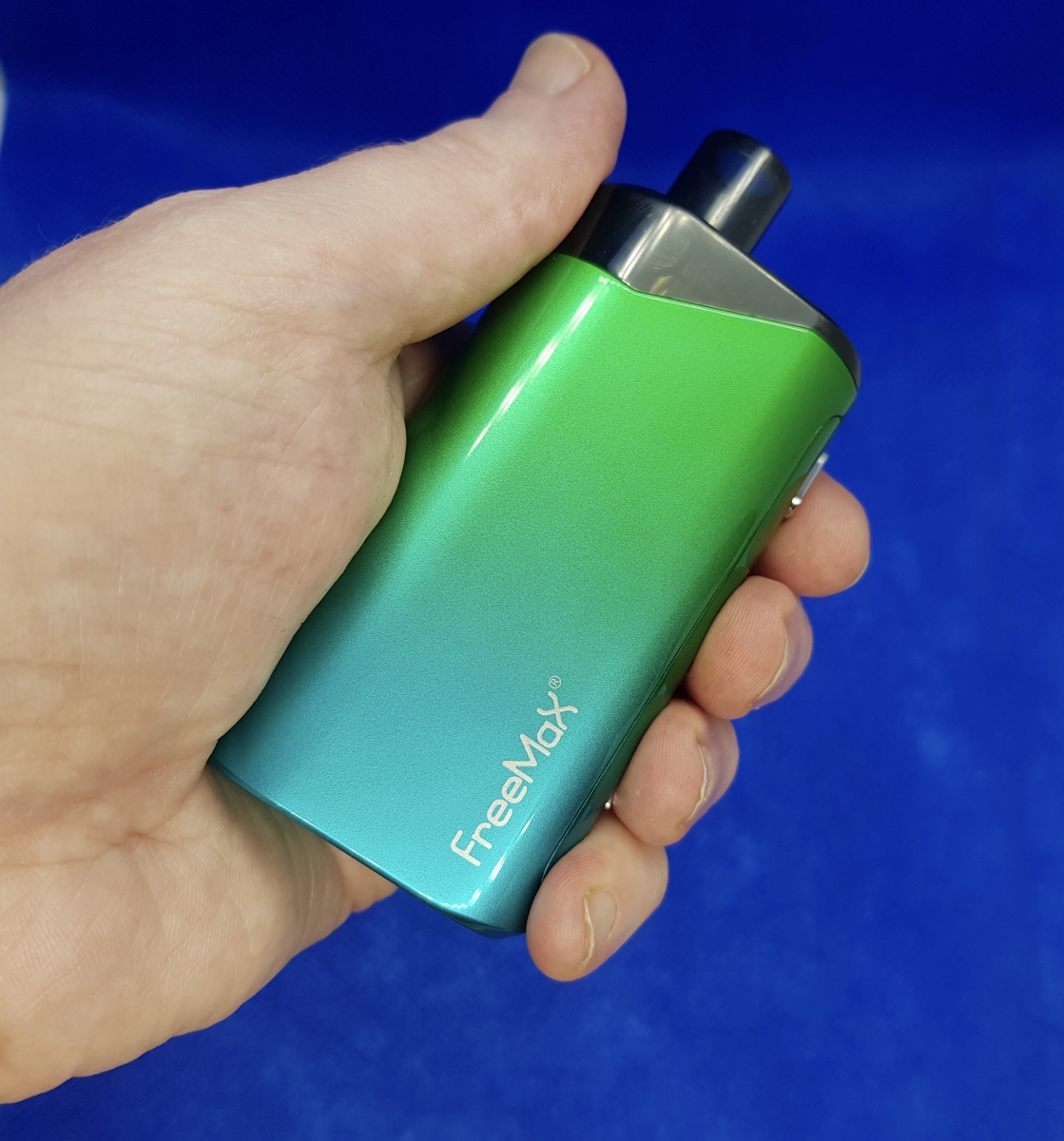