Today for review we have the Eleaf iSolo-R which was provided to me by The Electronic Cigarette Company.

Eleaf are calling this “the combination of function and fashion” and “a pleasure to hold and touch” as well as claiming it “has got all vapers covered with its GTL coil line and unique dual airflow system”. Strong words indeed, though I’m still not sure why they are calling it the iSolo-R and all I can think about with the R is that they should have a design with the Jolly Roger on it and tell me this would be the perfect device to sail the high seas with. Now, will this make me shiver my timbers, or will it make me want to walk the plank? Let’s see…. 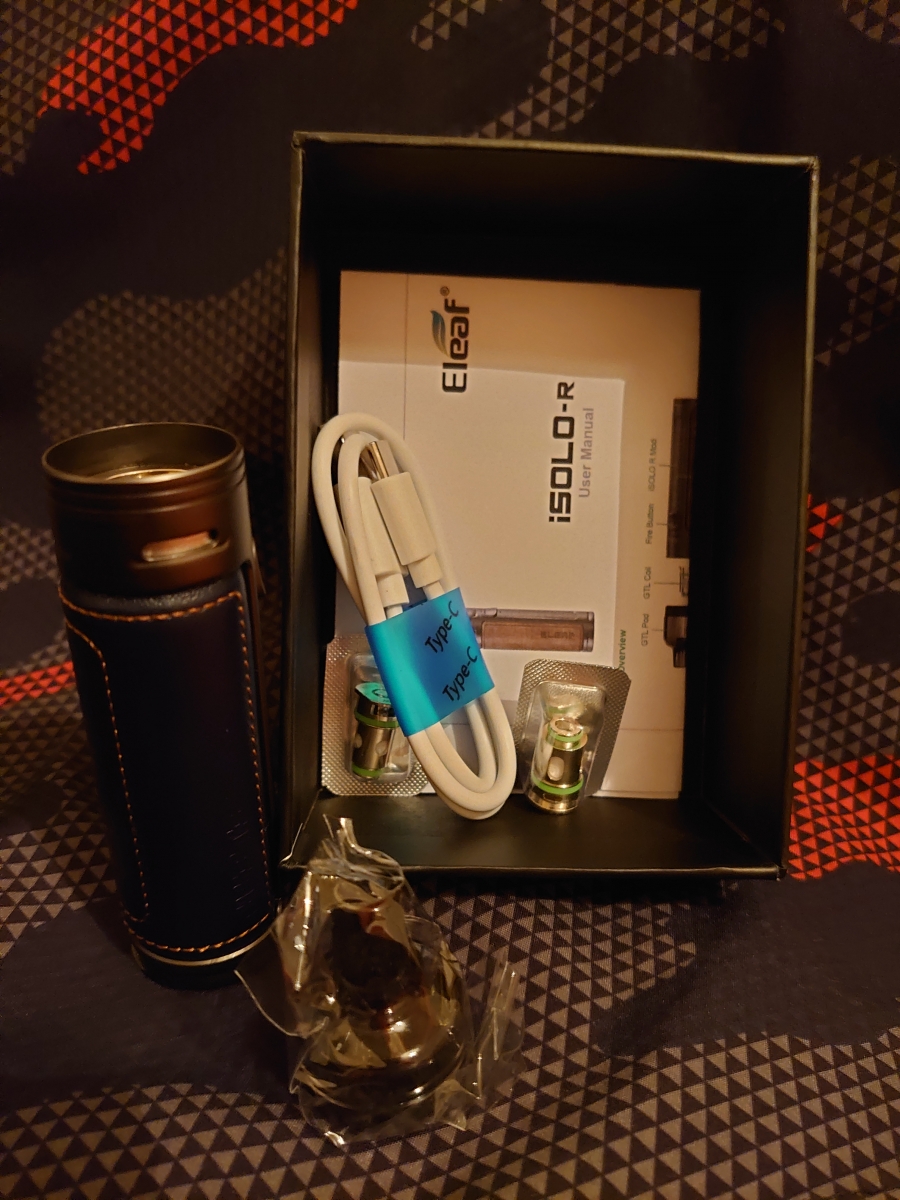 Once you open the box, there is the iSolo mod and the tank, remove the insert and everything else is underneath. In the box are the mod, tank, USB cable, user manual, warranty card and two coils, the 1.2ohm GTL coil and the 0.8ohm GTL coil. This varies depending on which version you purchase, I was sent the 2ml TPD version which comes with the MTL pod tank, but the standard version comes with the 4.5ml DTL pod and the 0.8ohm coil and a 0.4ohm GTL coil.

The Eleaf iSolo R kit comes in four colours – red, dark brown, light brown and the one I was sent, blue. They are all made of some sort of alloy and have a leather finish which is really comfortable in the hand, and the device itself is surprisingly light. There’s not much in the way of specs here as it is a surprisingly simple mod to operate with no adjustable wattage. The battery is 1800mAh and USB-C charging means the battery charged from empty to full in just under an hour. If you want the full specs you can find them here. 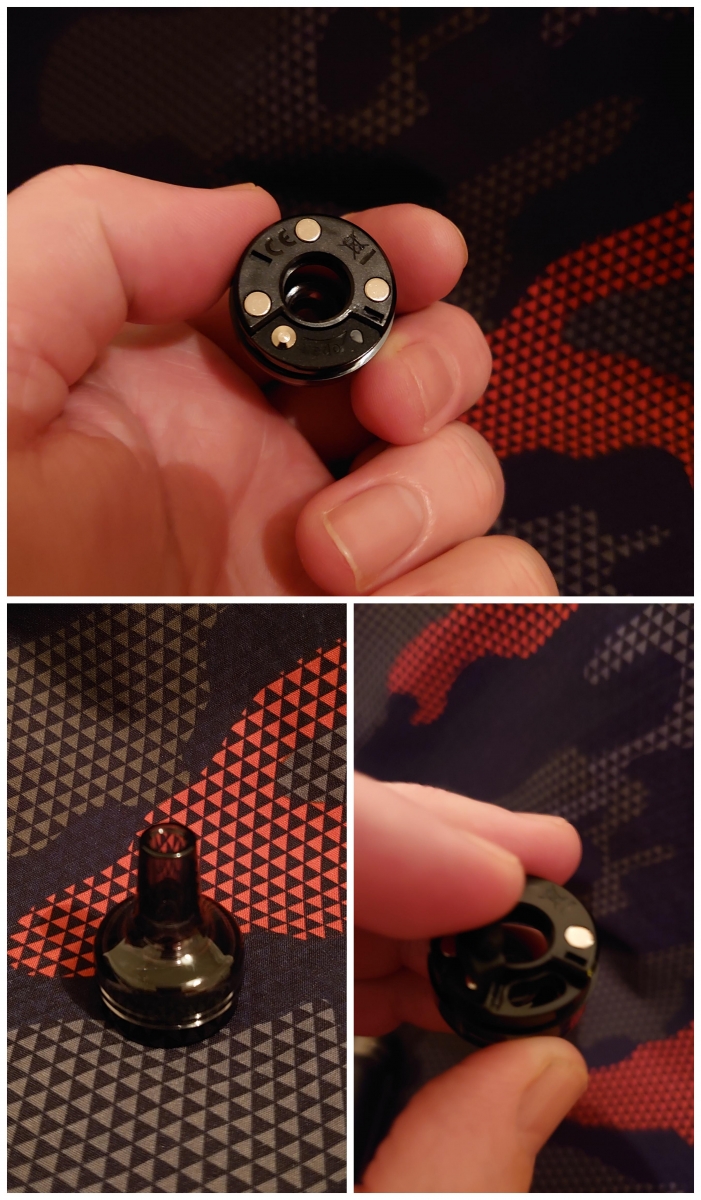 The mod itself is pretty straightforward with no adjustable wattage so you have the USB-C port and the fire button. I really like the fire buttons that Eleaf use and this one is no exception, it’s like pressing a switch and it responds beautifully. To operate, it’s five clicks on and five clicks off and there’s a little light below the fire button which flashes four times depending on the battery life: green 100% - 60%, blue 59% - 20% and red < 20%.

The MTL pod holds the TPD standard 2ml and is filled via a simple rubber bung which reveals the fill port which is large enough to accommodate most e-liquid bottle nozzles. The pod is held in place by four magnets and it stays in place quite comfortably. I’ve not had any leaks which is also handy for those pirates on their galleon. The drip tip is reasonably comfortable and the pod is slightly smoked but not enough that seeing your liquid level is ever an issue even in low light. You pop the pod on top of the mod and turn it slightly until it clicks into place, there are two small recesses in the bottom of the pod that house two slightly raised parts in the top of the mod. 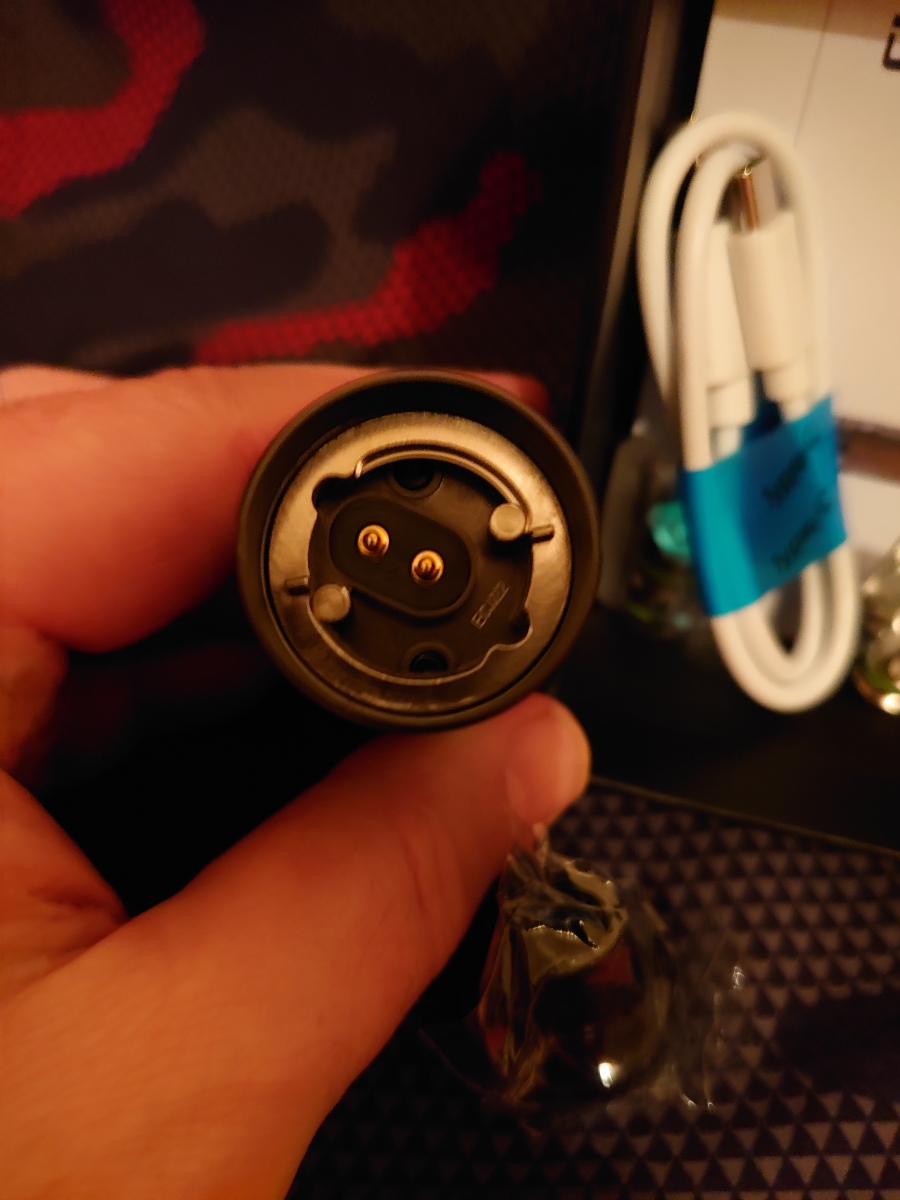 Now comes the clever bit. Once these are lined up, you twist the pod to adjust the airflow. There are five airflow holes and a cyclops opening on either side, and you can twist to adjust to suit. When twisted, the pod provides a good amount of resistance so it wont be adjusted in your pocket or bag accidentally. The coils are simple push and pull to fit, and the coil resistance and wattage range are printed on the bottom.

So, let’s set sail and see what treasures our voyage of discovery will bring….R me hearties and a bottle of rum? Oooh I do like rum with ice, so do penguins but we don’t sail that far south and pirates prefer parrots for some reason.

Fully charged and loaded with Crème De Tabac, I started with the 1.2ohm GTL coil. Now then, the first thing to note is that this coil gives excellent flavour. I could taste all the notes in my e-liquid and it’s so smooth so I cannot fault the flavour at all. However, even with the airflow fully closed the draw is just too loose for me for MTL. You could get a decent RDL draw with the amount of air available, or a really loose MTL draw, but that’s it. With the airflow fully closed, it’s still a medium MTL draw at best which is such a shame. If they could tighten the airflow down, then this coil could really shine, but as it is it feels like a missed opportunity for MTL.

I switched over to the 0.8ohm coil and the result is pretty much the same. Again the flavour is really good, not as good as the 1.2ohm coil but still really good. It suffers from the same problem though in that there’s just too much airflow for MTL even with the airflow closed off. If you open it up, you can get a decent RDL draw. The flavour is good this way but not outstanding, and it lacks any real warmth. I tried this coil with 50/50 and 70/30 VG/PG and the coil easily keeps up with the wicking without any problems even with the thicker liquid. 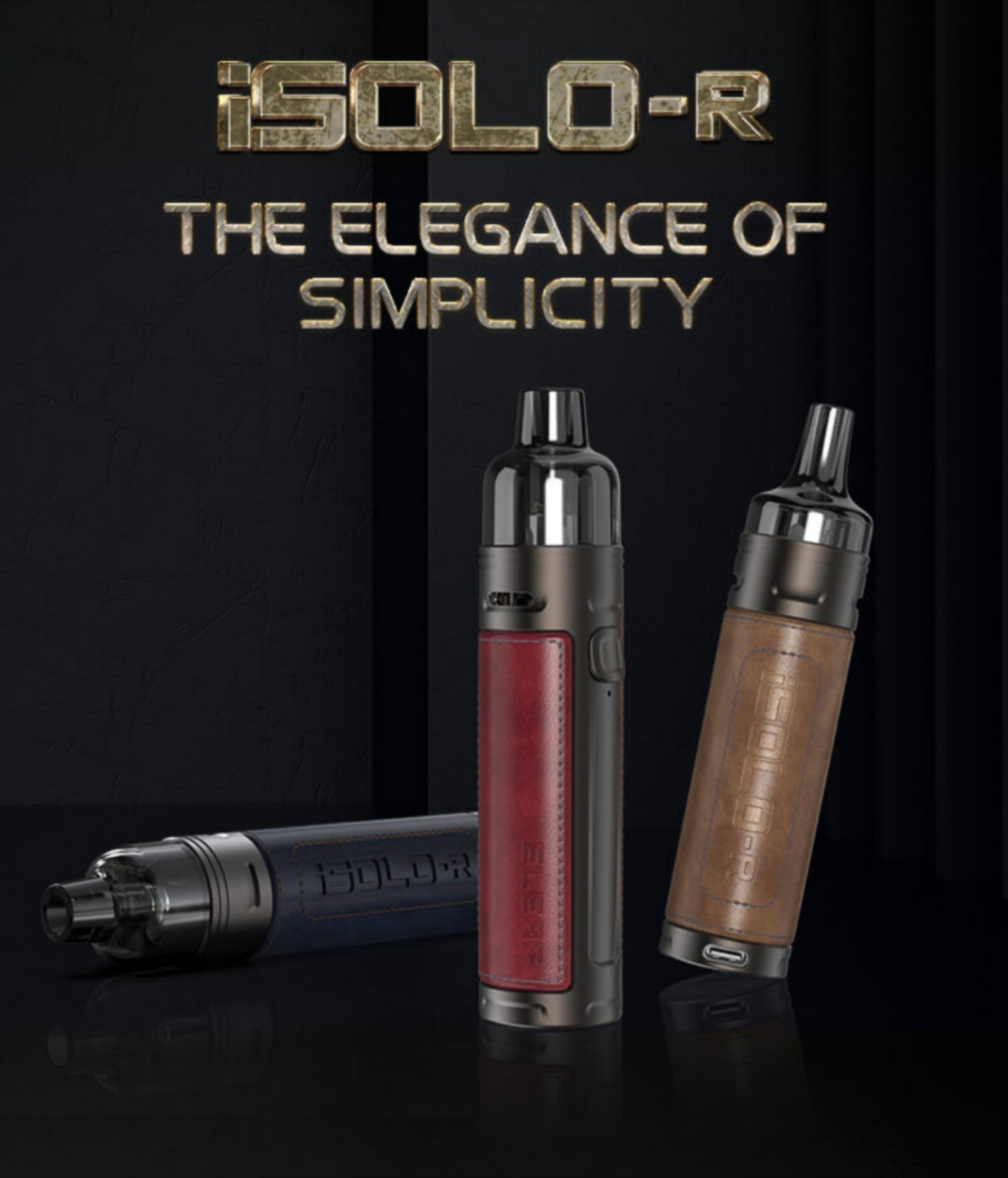 When you take this out the box you’ll notice how nice it feels in the hand, it’s light but solid, and the leather provides a lovely feel in the hand. It looks good, if not too dissimilar to other devices. The flavour from the 1.2ohm coil, in particular, is really good, and the battery was more than enough to last me a full day of vaping. It charges in less than an hour, and the airflow is a really good concept. The major downside though is the airflow, there’s too much of it for MTL. Even if you close it off, there’s clearly some air still getting in and because the air comes in from both sides (port and starboard but I can never remember which is which), this exacerbates the problem and gives a loose MTL which doesn’t work for me personally. It feels like this device has been designed for direct lung/restricted direct lung, and then the decision for TPD has been taken to supply it with the MTL pod and coils because of the 2ml rule. You can get a half decent RDL vape from the 0.8ohm coil, and I suspect the 0.4ohm coil would give a nice vape indeed.

There’s a lot to like with the Eleaf iSolo R kit, the flavour from the 1.2ohm coil really is excellent, and if you like a very loose MTL then this will be your treasure, but for me it needs to be much tighter. The airflow system is a great idea and Eleaf should be applauded for innovation, but there’s just too much air getting in. Like sailing the seven seas in a storm, it’s just too windy.

FM is setting sail for the Caribbean. 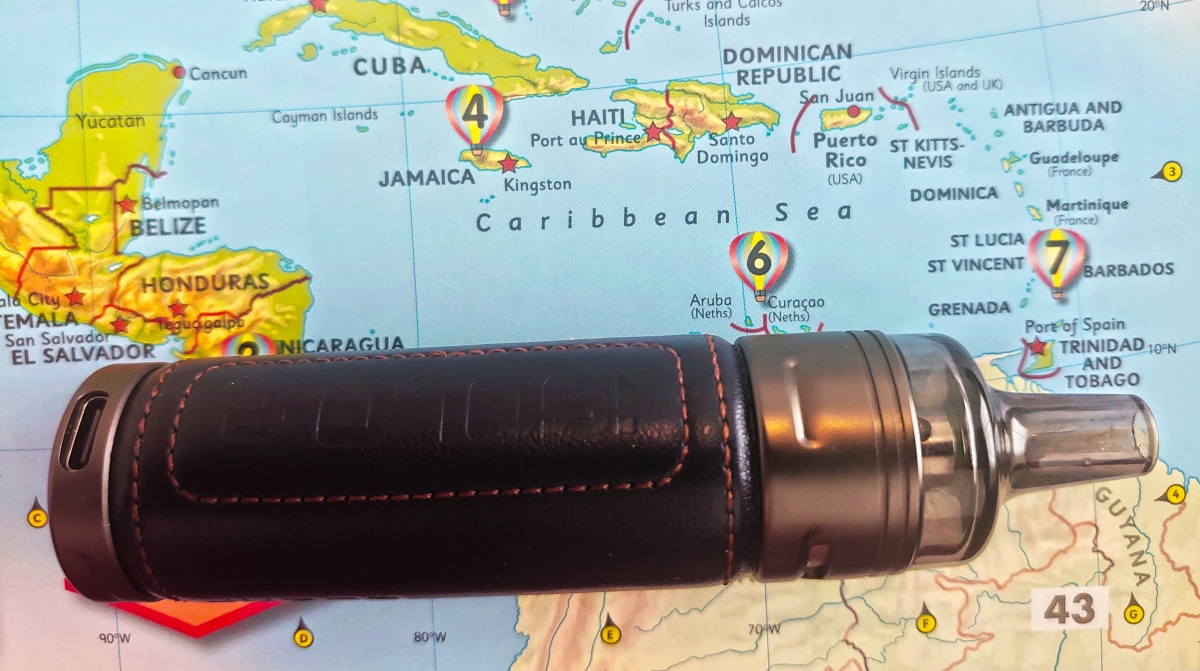