Today for review we have the Aspire Cloudflask S which was kindly provided to me by UK Aspire Vendor.

The original Cloudflask was released last year and proved popular with its hipflask styling and leather case. The new S version doesn’t come with the leather case and has lost a little of the flask stylings, but what does the S stand for? Slimmer? Special? S Club 7? I’m gonna go with Scaramanga, the Bond villain whom I will defeat with vapour clouds. 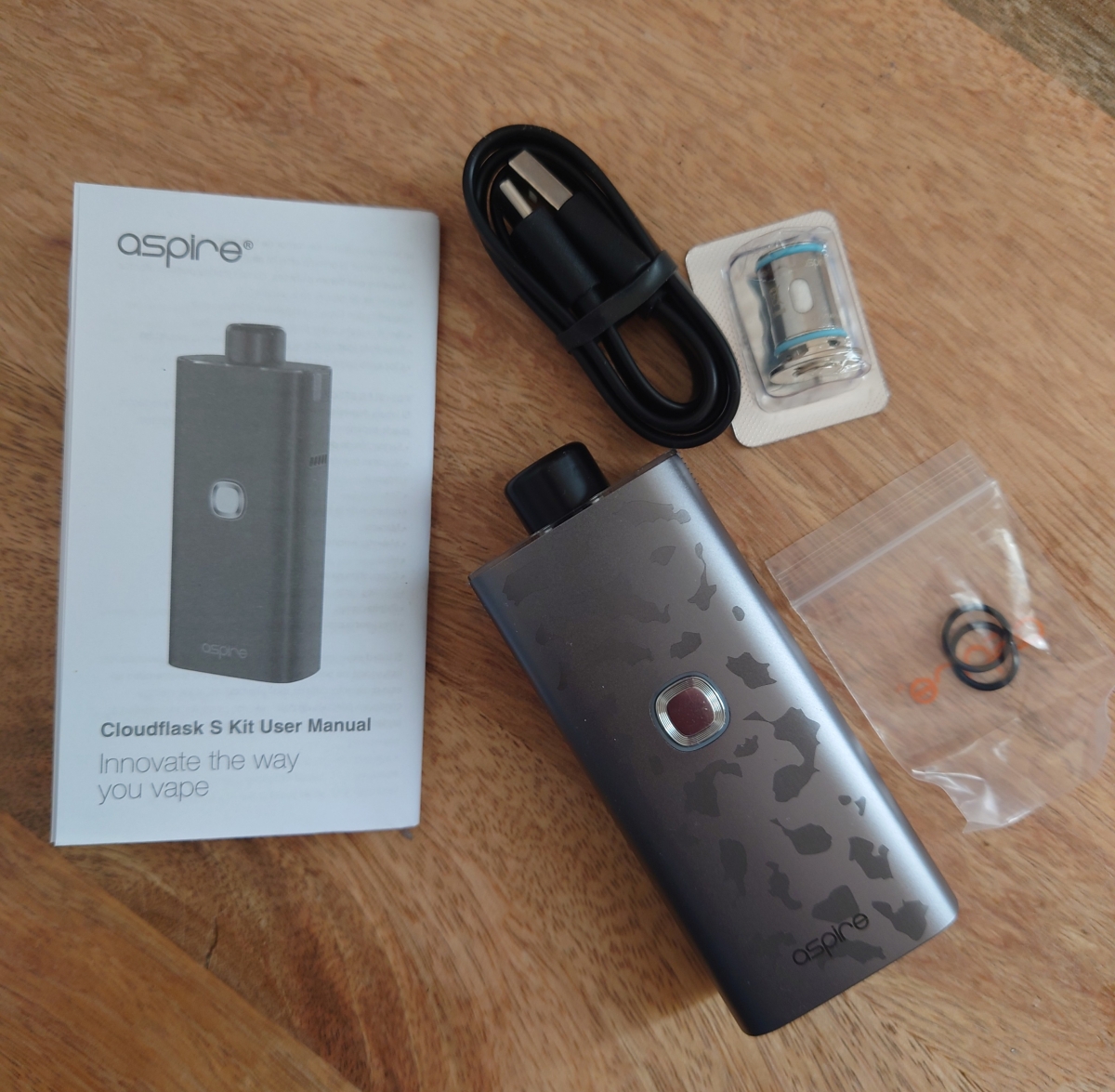 In the box was no golden gun, but there was:

The kit is available in Black, Brushed Brass, Gold Gradient, Green Camo and the one I was sent, Grey Camo.

For a full set of specs, you can visit UKAspireVendor, but the main ones are:

“You see Mr Bond, like every great artist I want to create an indisputable masterpiece once in my lifetime” – Francisco Scaramanga, The Man with the Golden Gun

There’s not a great deal to the Aspire Cloudflask S, but from a styling point of view it’s a nice little kit. There’s some camo effect on the front and back but if I’m honest I would have preferred this not to be there, but it’s not a deal breaker at all. There’s very little branding with a simple “aspire” in small black lettering on the front and “Cloudflask S” on the back. The sides don’t have the camo effect, and there’s the airflow port on either side and on one side the USB-C charging port. The fire button sits proudly front and centre begging to be pressed, and I drift off imagining that pressing it with open up an Aston Martin DB5 or that it’s one of Q’s gadgets that will fire small explosive penguins but alas, it just fires the device. There’s no adjustable airflow and no adjustable wattage so that’s it as far as the device is concerned, it’s designed to be a simple device, just fit the coil and fire. Five clicks of the fire button turns on the device and five more to turn it off, the LED around the fire button will flash white three times when turned on or off. The colour of the light around the button will also show the battery level when pressed – Green (100% - 60%), Blue (60% - 30%), Red (30% - 0%). 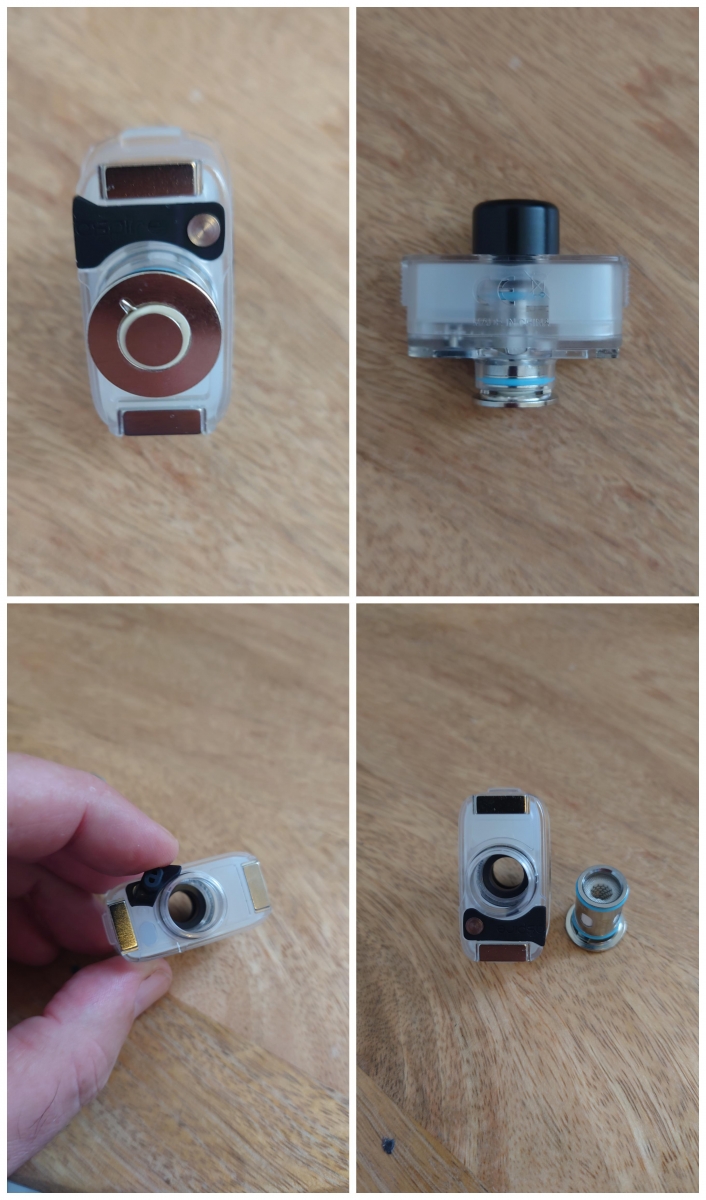 “You appear with the tedious inevitability of an unloved season” – Hugo Drax, Moonraker

The pod itself sits nicely in the top and is held in place by some very strong magnets, you can almost drop the pod in and there’s an oddly satisfying snap as it clicks into place. There are some grips either side of the pod to make it easier to remove and they work very well, and the LED light flashes white once on removal and replacement of the pod. Filling is done by peeling back the rubber bung on the bottom, as is pretty standard for this kind of device, and it works well enough. Fitting the coil is as easy as Bond villains seem to find henchmen or lairs, just pull the old coil out and push the new one in.
The standard pod is a generous 5.5ml, but as I was sent the TPD version it was restricted to 2ml by a rather despicable bung. It’s ugly and it obscures the view of the liquid level meaning that you have to remove the pod from the device just to check how much you have left. It also means that you will be filling this device a lot due to the wattage it is firing at. I appreciate that this is not Aspire’s fault, rather a restriction of TPD, but it’s well worth seeking out some of the 5.5ml pods or testing your patience and seeing if you can remove the bung. The drip tip supplied is more than up to the task, it’s simple but effective and very comfortable. 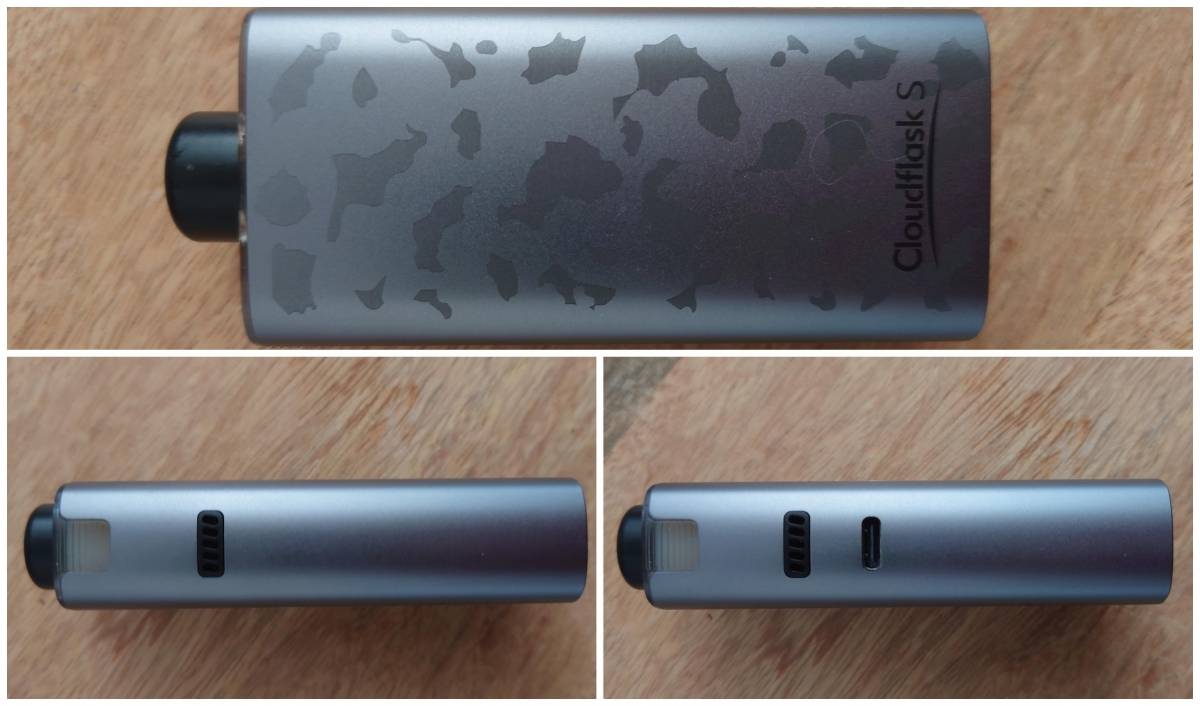 “The distance between insanity and genius is measured only by success” – Elliot Carver, Tomorrow Never Dies

The two coils that come with the kit are both kanthal mesh 0.25ohm which are rated at 40W–50W, although there is a new 0.6ohm coil available but this was not provided with the kit. The ASP Chipset detects the coil and the battery level and applies the relevant wattage.

I took out the pre-fitted coil, primed it, popped it back in, and filled the pod with my now ubiquitous Unicorn Shake before letting it sit for fifteen minutes before taking a vape. With this kind of kit, you live and let die, sorry, live or die by the coil and how good it is, and let me tell you this, Aspire have nailed it here. This coil is definitely a direct lung coil as it’s an airy coil which produces a surprising amount of vapour with a warmish vape, but the flavour, oh the flavour is superb. I got rich, deep, and immensely gratifying flavour from this coil and it was a genuine pleasure with each and every vape. The coil being so close to the mouthpiece means no flavour gets lost along the way, and you can tell. You’ll need to remove the drip tip every now and again as some liquid tends to pool slightly under the drip tip, but it’s a small price to pay for such a tasty vape. 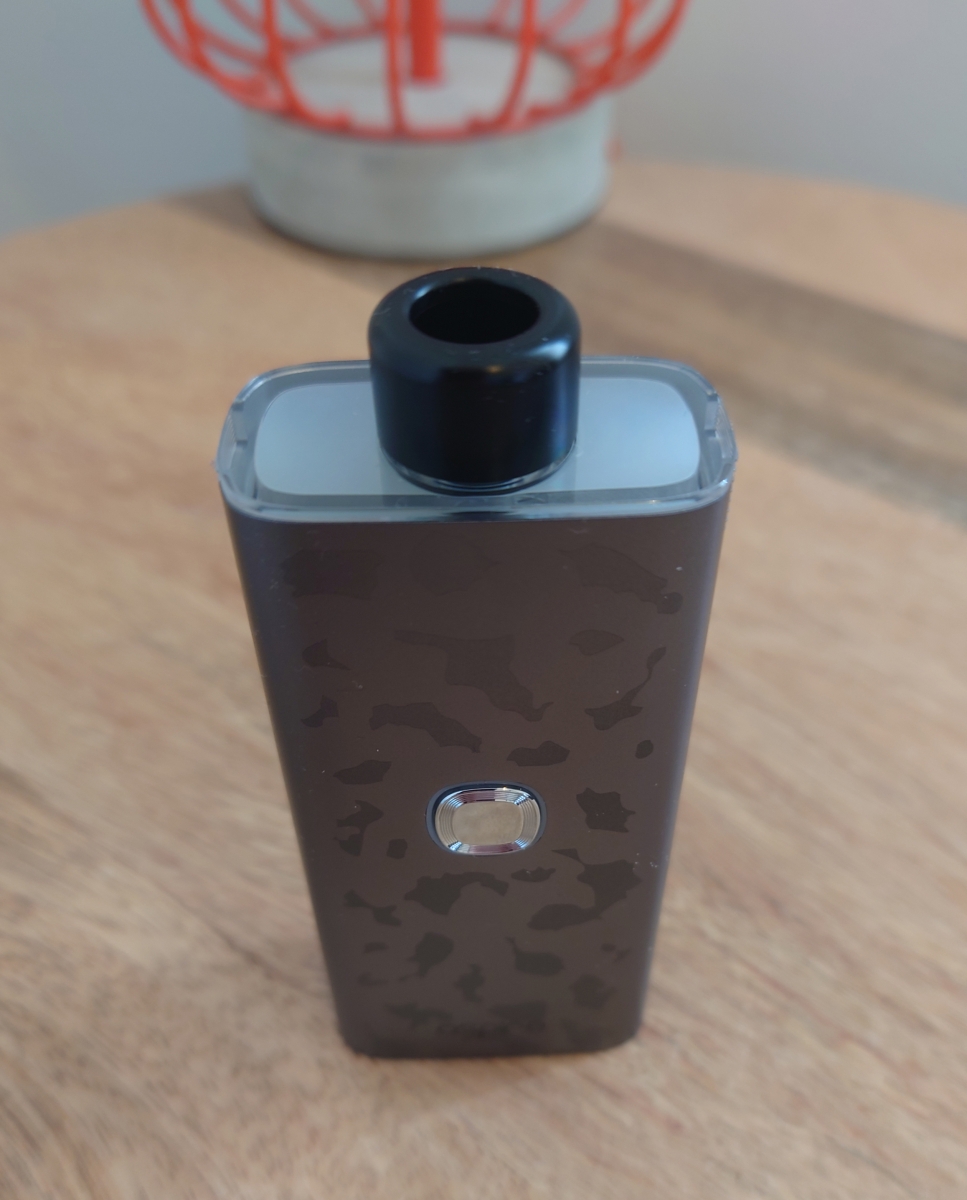 “No Mr Bond. I expect you to die!” - Goldfinger

The Aspire CLoudflask S is designed to be compact, easy to use, and to provide a flavourful direct lung vape, and it ticks all those boxes with vigour. It’s well made, it’s light, it fires quickly, and the flavour from the 0.25ohm coil is absolutely outstanding. It’s simple to use as there’s no adjustable wattage or airflow, just push the button and inhale. Changing the coil is easy, and the coil life was good too with me getting a good ten days life before the flavour started to drop off.

It’s not without its issues though, liquid tends to slightly pool under the drip tip, and if left for 24 hours there was some seepage under the coil which needed wiping out. The bung is horrible in the TPD version and quickly becomes an inconvenience, and there’s no adjustable airflow or wattage so if they don’t suit you, there’s no adjusting them at all. The battery won’t last you all day, but you can vape whilst charging, and it fully charges within an hour.

If you are looking for an adjustable device which will last all day, then you’re not going to find it here, but this was never designed to be that. If you are looking for maybe a first taste of direct lung vaping or looking for something which is a little pocket rocket providing blinding flavour on the go, then the Aspire Cloudflask S is absolutely worth checking out as it’s a little flavour banger. For all the slight niggles, I’ve really enjoyed my time with this device. Some might say we’ve formed a Bond. 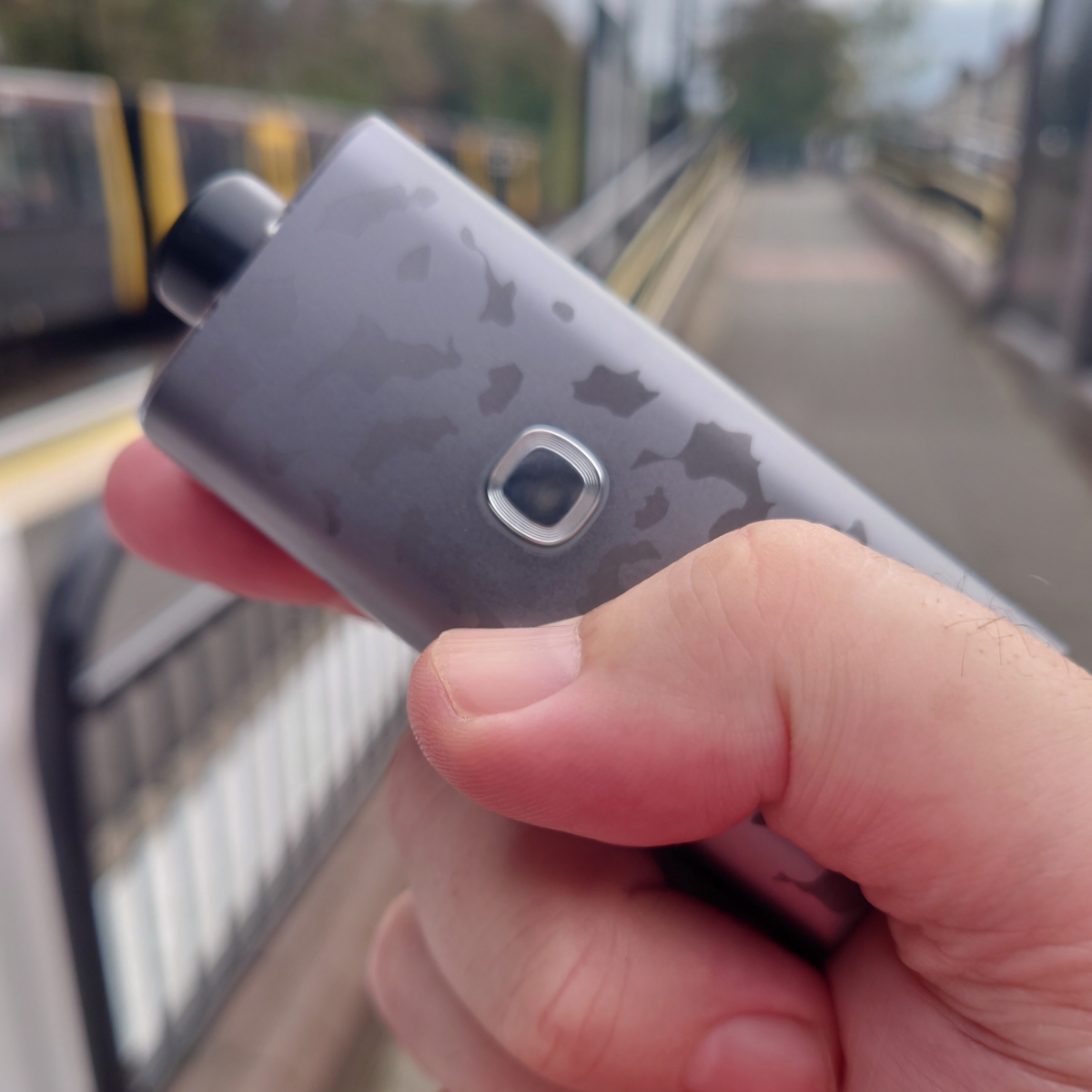