VooPoo have given the popular DRAG S PnP and DRAG X PnP pod/mods a bit of an upgrade with the all new tank and some rather snazzy leather wraps. The new tank is derived from the TPP design but takes the full range of the popular and widely available PnP coils.

The mod hardware and chipset is essentially the same as the previous DRAG S/X version but with a more stylish leather wrap selection, but the refreshed design tank gives it a whole new lease of life and a far better overall look. 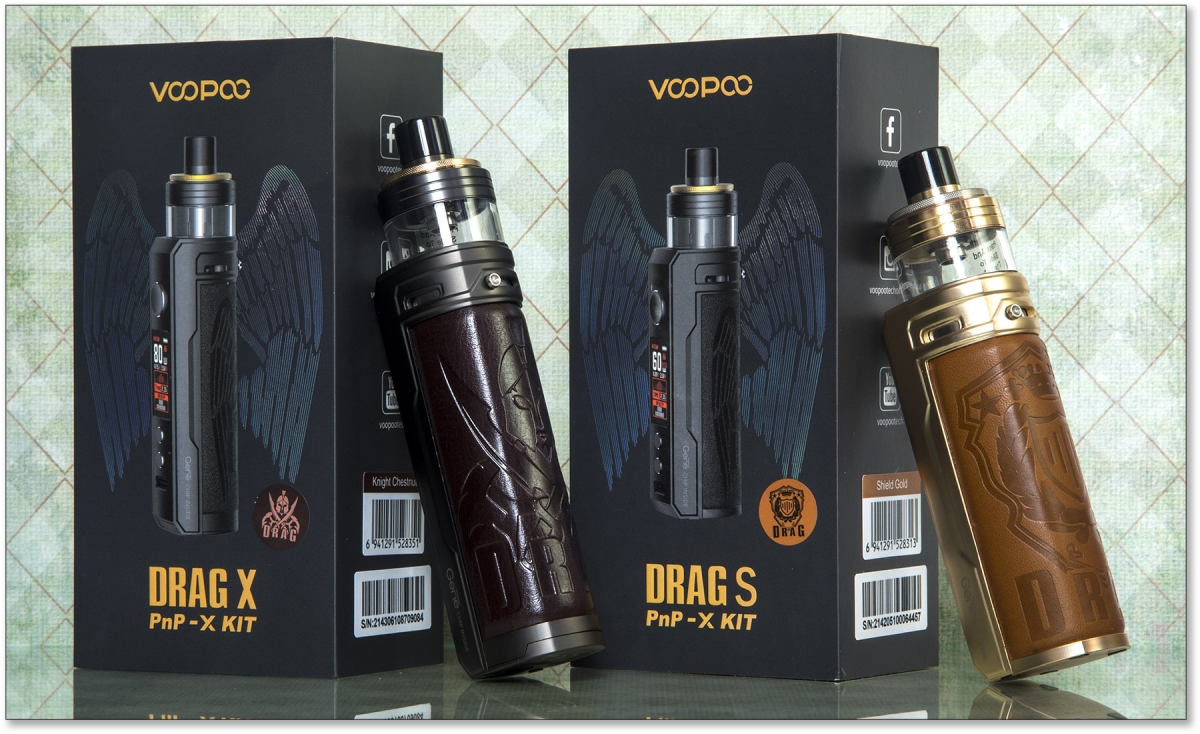 VooPoo have always been smart with their packaging and the kits come in fairly minimal but good quality boxes, there is an artistic outer sleeve with a generic image and a sticker to show the colour option. 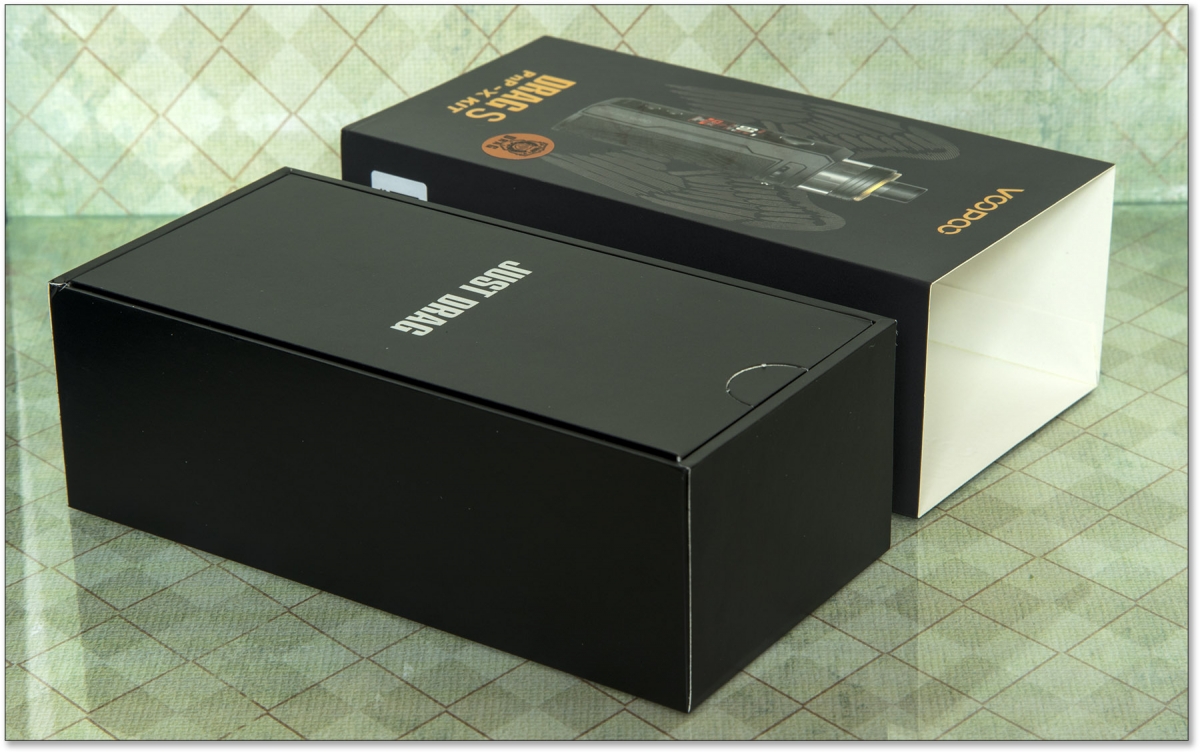 To keep the waste down, they have used the accessories box as the top layer which doubles up as shipping protection instead of a two piece box, it might not sound a big deal but it’s smart and saves on packaging. 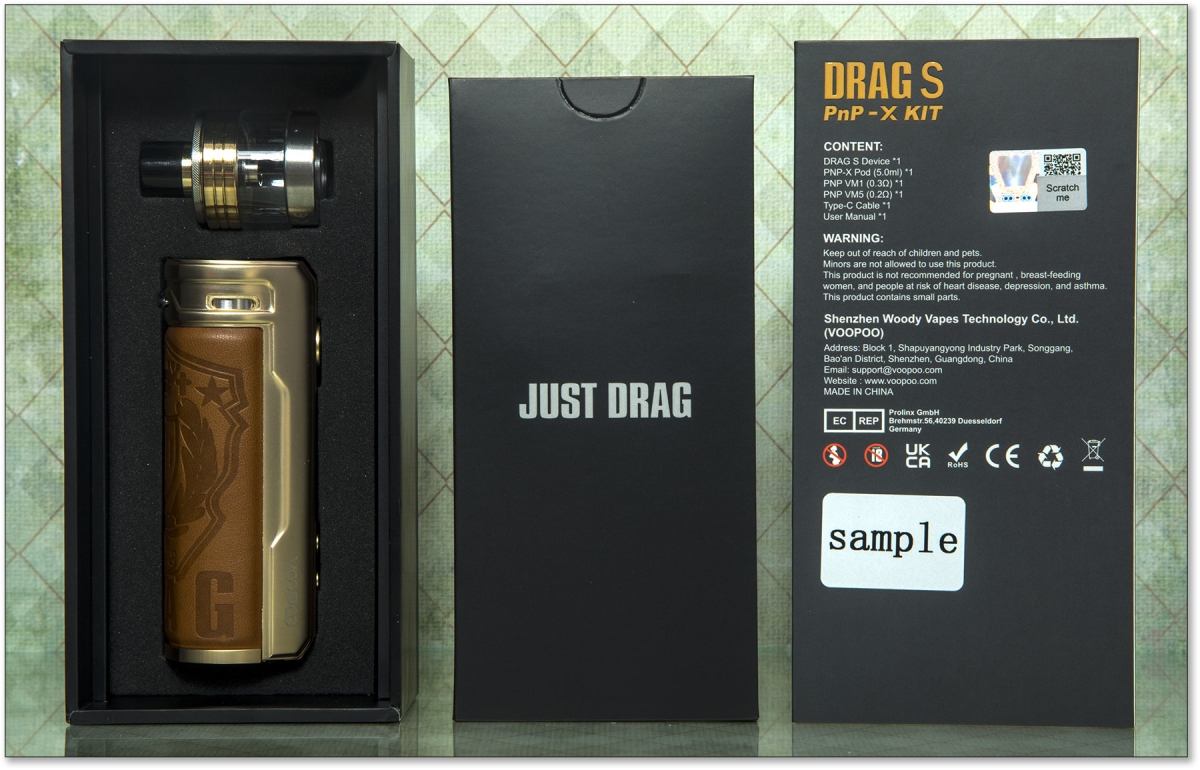 Both versions have exactly the same packaging and extras box, both are the same height etc. The only difference is the actual mod section. 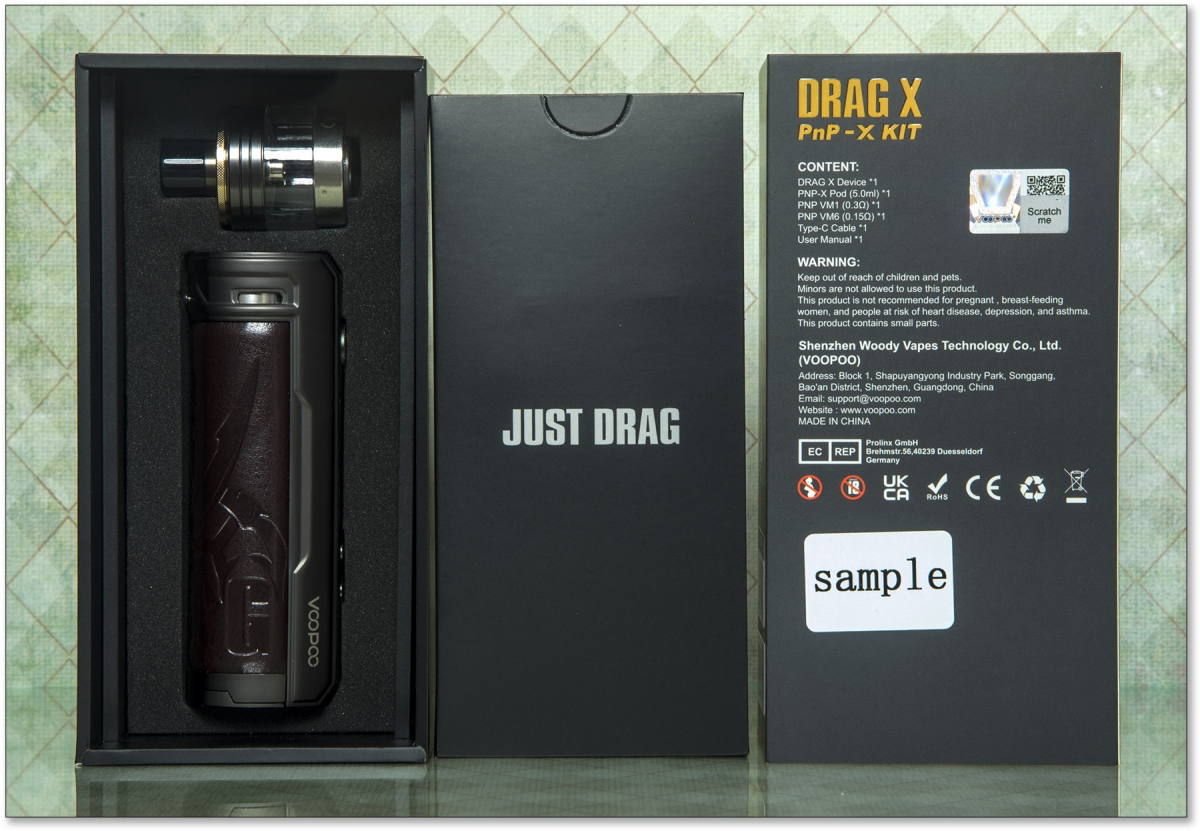 The presentation is good and frustration free as everything is easy to take out. The contents are as you should expect from a kit. 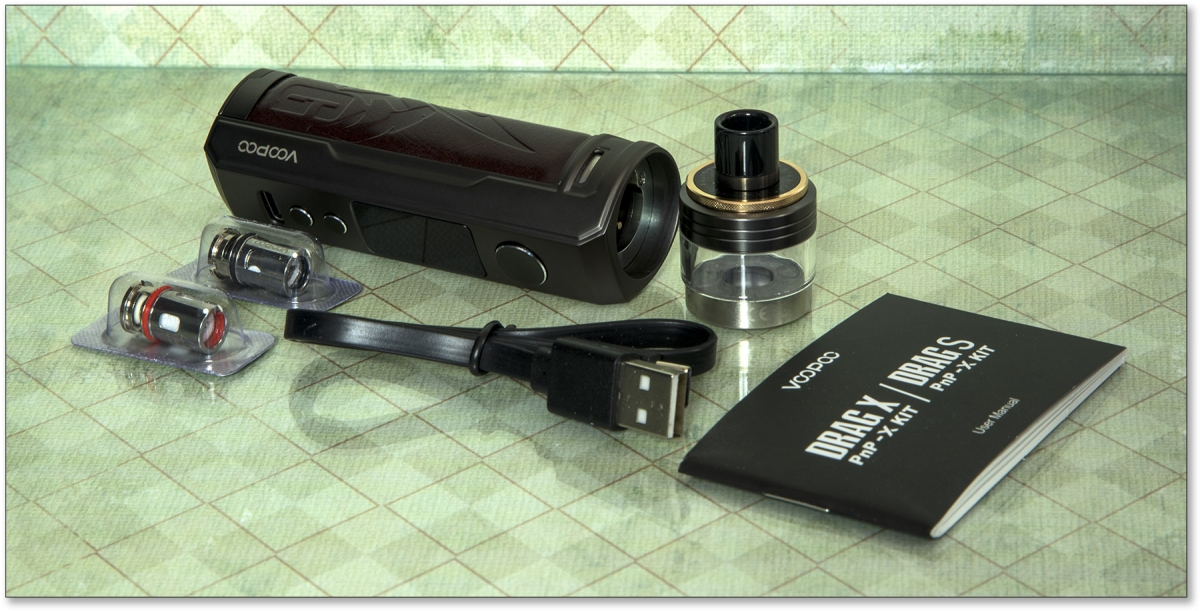 Both kits look so damn good with the new ‘Knight’ themed coat of arms leather wraps instead of the older versions which had the DRAG embossed in large letters, these version are far more interesting to look at and have a classier design overall.

So which one’s for you? The main differences between these two versions are:

It takes an external 18650 battery with a slide-lock battery door and goes up to 80 watts, it is taller but skinnier overall.
Dimensions: 127.5mm x 32.5mm x 28mm including tank.
Weight: 166.2g including battery and pod.
*The dimensions are deceptive as it is actually 2mm narrower at the body and larger dimensions are increased at the pod base

It has an inbuilt 2500mAh internal LiPo battery but the maximum wattage is 60 watts, shorter and fatter than the X but lighter in weight.
Dimensions: 119.5mm x 33mm x 28mm including tank.
Weight: 149.2g including pod.

The difference between the two feels more obvious in the hand; for me the DRAG S feels better and is more proportional, but I’m a little torn as the DRAG X just feels smaller despite the additional height. Which one suits you will likely be down to the battery option and the additional 20W, but both feel great in the hand.

I’m loving the way that the new PnP-X tank makes the kit look much better and more balanced, the old PnP all plastic pod just cheapened the look, but this one enhances it and feels less of an add-on.

My personal favourite is the gold/brown DRAG S, I love that the gold is a satin finish instead of a glossy fingerprint magnet, and they have matched the tank perfectly. I also prefer the tan leather as you can see the embossed coat of arms more than the darker leather versions.

The darker version also has an understated appeal, though it’s harder to see in the photos; the embossed pattern looks superb in real life as you rotate it in the light, the embossing quality is so impressive, again the PnP-X tank is well matched.

On the face of it, the PnP-X kits are the old DRAG X and S mods with a new tank and leather wrap, this may be true but I actually admire VooPoo for this. We see way too many perfectly good mods and kits upgraded simply for the sake of it and rarely do we see existing devices updated. The mod is already superb and is ideal for the PnP platform so why not re-issue it with a new wrap? I’m down with that as it sounds far less planet resource hungry to me.

So what’s the deal with yet another PnP pod? Don’t let it confuse you as it still takes the wide range of PnP coils, the difference is a complete overhaul of the construction and looks which are far better than the previous versions.

The base is pretty much the same push fit coil style (PnP), from there on up it is all different, with a nicer clear PCTG section and a more convenient top fill mechanism, all topped off with a rather nice drip-tip which is a standard 510 fitting so you can swap it for your own. The construction is great but the looks overhaul makes the biggest difference as it looks far more like a proper tank rather than a pod. 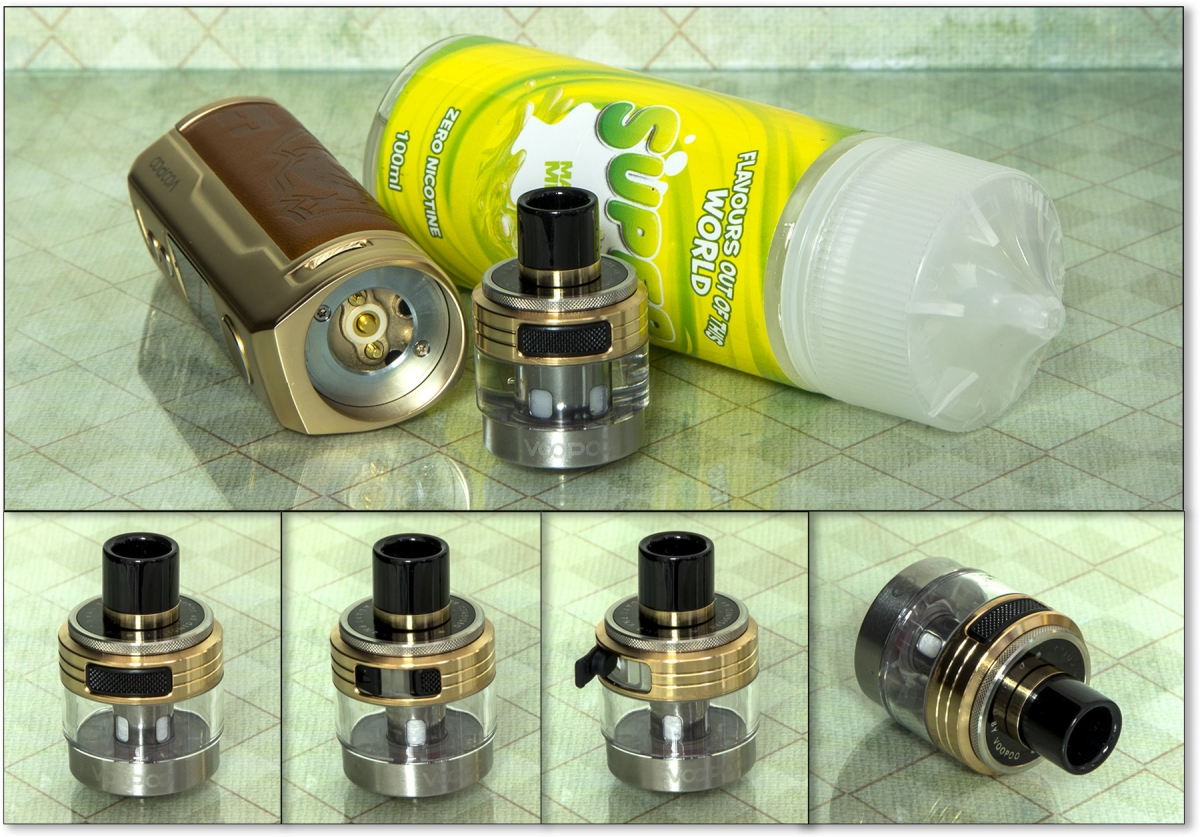 The innovative top-fill might look a faff but it is surprisingly simple and mess free to fill up, you push the lock-button in and turn the top-piece clockwise to reveal the filler bung, then it’s the usual pull open, fill up then pop the bung back in and rotate back to lock. My only concern was that the silicone bung tab felt a little thin and could break off over time, but I have been using the TPP version of this for a couple of months and hasn’t been an issue so far.

So has the new PnP-X added to confusion over coil compatibility? Definitely not as it still takes the vast range of PnP coils, if the coil says PnP then it fits this tank. The only coil it does not take is the TPP, you simply need to remember ‘PnP’, the –X just denotes the new style. 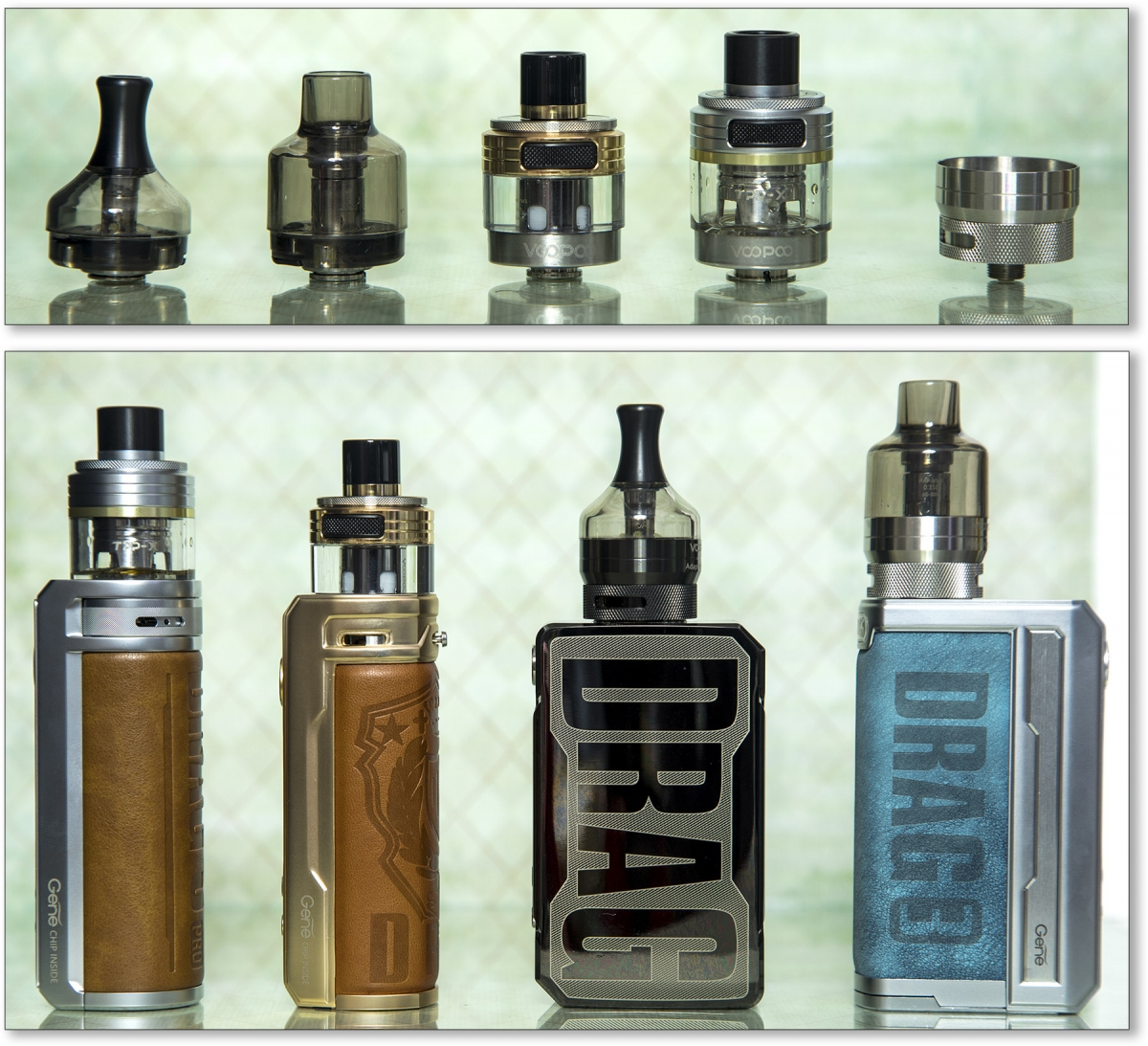 The best part and huge props to VooPoo is the pod platform is fully cross compatible, and this becomes even handier if you own multiple VooPoo pod devices that take the PnP pods or indeed on any 510 connection mod using the 510 base adaptor. The good news is that you can simply upgrade your older pod to the PnP-X which is available separately, and it transforms the look of your old kit.

Though the DRAG X and S are intended to be DL devices, I was surprised how good the MTL PnP pod looked on them. 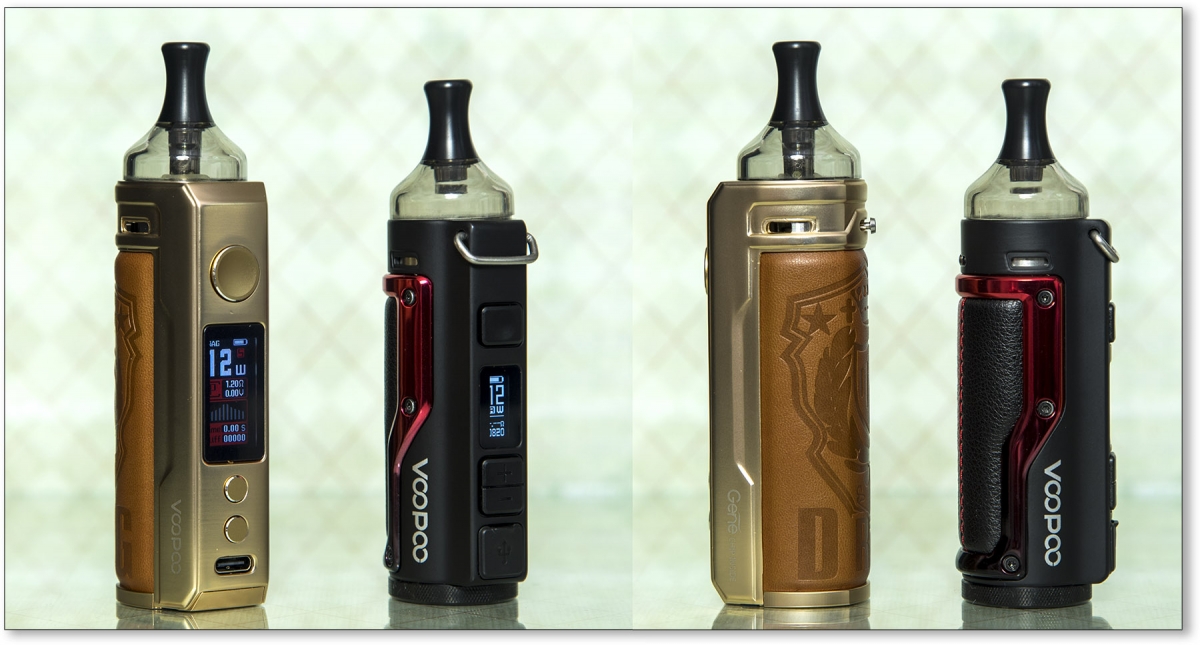 The only snag is it doesn’t look as nice as the PnP-X’s new styling and if I’m honest, the MTL coils kinda suck as they don’t last very long, so I have my fingers crossed that VooPoo give us a better MTL option.

Both kits have been designed with a simple and fast user interface, in theory you can get away without having to venture into the settings as it has ‘Smart Detect’ which measures the coil you use and sets the wattage automatically, this works rather well and is a good middle ground.

You can adjust this wattage to suit your tastes and decide whether to turn SMART On/Off as well as Auto-Draw On/Off and resetting the puff counter, it’s pretty basic stuff but it has all you need for the PnP pods and is an ideal starter kit.

The PnP coil performance has been covered in many reviews here on POTV and I have tested them in a few kits, and the reason VooPoo still continue supporting this coil series is that they perform so well, plenty of flavour and surprisingly large vapour production for the coil size. I preferred the 0.3ohm coil as it lasts longer and is less of a battery drain, but for a trade off with a less intense vape, the 0.2ohm will give you that full on higher powered vape though and the vape quality is top-draw.

The mod (either option) is just the right choice for the PnP tank using these two coils, though if you want to venture over the 60watts that the DRAG S offers then the DRAG X 18650 is the better option. I stuck to using the S as it was simply my favourite and the 2500mAh internal battery lasted well at 35watts keeping me vaping for a full working day.

The 2 Amp fast charging was ideal for a single battery kit and took under an hour on average and around forty five minutes from around 30%, but the battery bar only shows an icon on screen so you have to guess a little, during charging it does show a percentage.

The only issue I had during use was the absence of an adjustment button lock, fortunately ‘SMART’ mode won’t let you venture much above the coil’s wattage range, the full locking was handy for when you store it in your bag or pocket.

I know I’m ‘drag’ging on a bit with this review but I want to mention the difference between VooPoo’s other recent release to avoid confusion:

The main difference you need to know about is that this kit has the TPP pod and only takes TPP coils which are bigger than the PnP coils BUT the platform is the same so you can swap over the pods to either. The other differences are in the styling, locking switch and airflow dial, you can read the full review here:
https://www.planetofthevapes.co.uk/reviews/pod-systems/voopoo-drag-s-pro.html
https://www.planetofthevapes.co.uk/reviews/pod-systems/voopoo-drag-x-pro.html 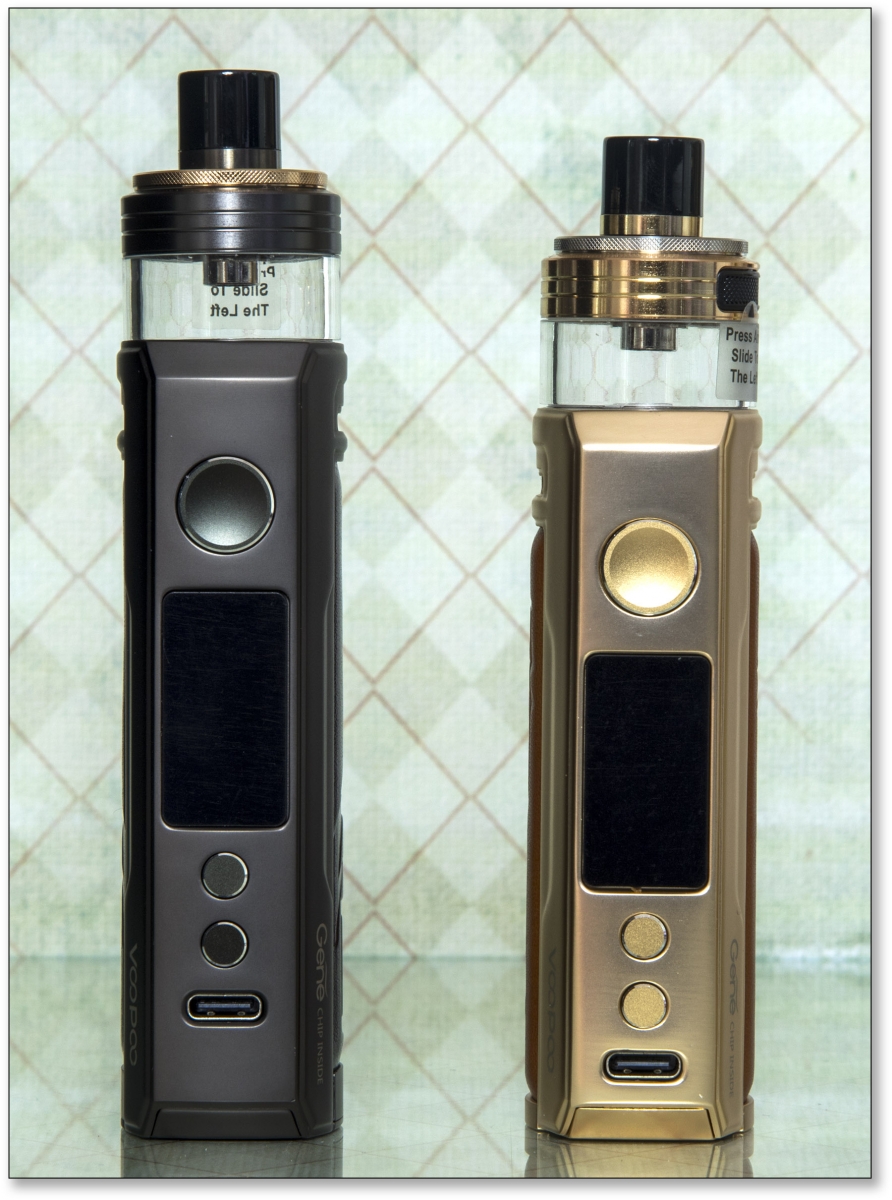 If you’re new to VooPoo kits, then you are in for a treat with either kit. The S version with an internal battery makes life easier, and DL vaping doesn’t come much easier than this. VooPoo’s quality is exceptional for the affordable price, but these kits also offer experienced vapers plenty due to their looks, ergonomics and performance along with the widely available PnP coil and pod range.

They are clearly aimed at DL (Direct Lung) users but don’t expect them to be fire breathing ‘Drag’ons. That said, you can expect a damn fine vape full of flavour and decent vapour production.

Already have a DRAG pod/mod? Then it’s worth investing in the PnP-X pod separately to transform your old pods look and to get a more convenient filling.

Is the limited functionality a con or a pro? It’s a pro for new vapers but might leave experienced vapers wanting so that will be up to you.

VooPoo have breathed a new lease of life into the DRAG S and X kits with a worthy upgraded tank and stylish wrap. New users will love them, as will a lot of existing users. VooPoo continuing to support the magnetic pod platform and Pnp coils makes the DRAG S anto X more appealing and less likely to be out of date too soon. 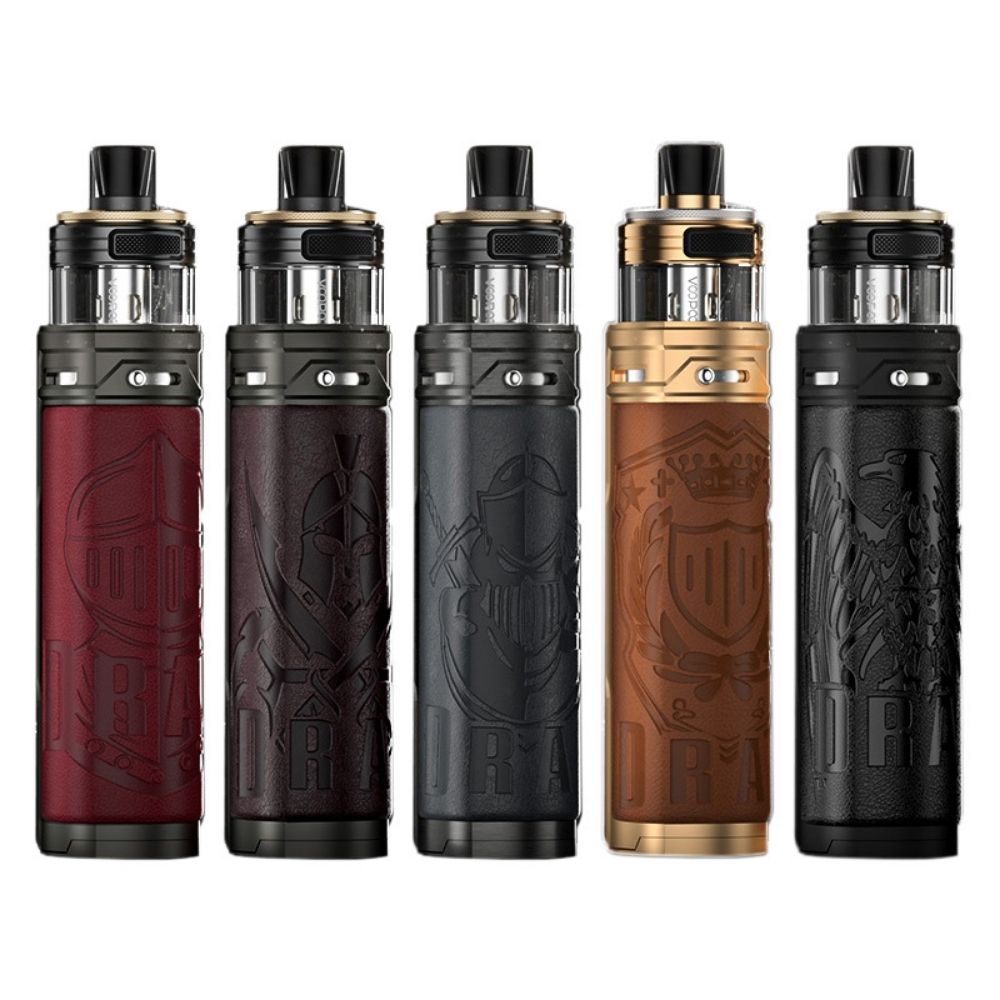