Following hot on the heels of the Goblin and the Goliath, Youde now bring you the Zephyrus. According to Greek mythology Zephyrus was the god of the west wind but in the case of this device it is a Sub-Ohm tank that comes with its own rebuildable deck as well as a stock coil. Promising excellent flavour and massive amounts of vapour, is the Zephyrus as good as it claims? We shall see.

The box itself is of a typical hard plastic with a press fit lid that is very reminiscent of Aspire's kind of packaging. It seems a lot of manufacturer's are doing something similar these days. The tank and the extras are contained in a foam inlay. There is no user manual but there are loose instructions printed on the back of the box. On the whole the extras are rather generous and good value for money.

The tank was completely free of machine oil but I did wash it anyway. 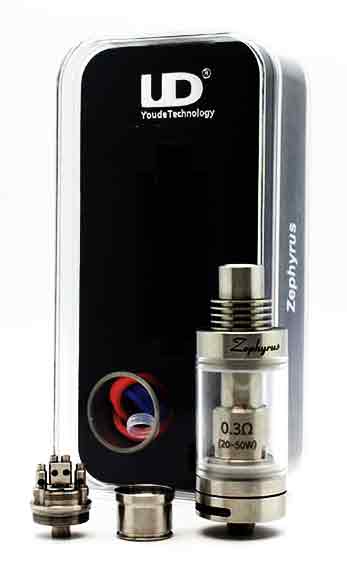 In terms of actual aesthetics this is a decent looking tank, very solid and well put together. I find it shares many similarities visually with the version 2.0 Subtank Mini. The airflow control and the overall shape of the main tank itself is almost like a exact replica. Of course when you get to the heat sink adapter and the dip tip the comparison ends.

The drip tip is reasonably wide bore and of the short/stubby variety. The interior of the drip tip is cut with a spiral shape which is apparently similar to rifling in a gun. It is designed to increase vapour production by producing a vortex like effect when you vape. While the drip tip itself fits well I find the heat sink 510 adapter a little wobbly. Now you could fix this with a extra O-ring or a little dental floss wrapped around it but it does seem to be a weak point considering the good quality of the rest of the tank.

The airflow slots are massive and fully opened up if you look through them all you can see is the 510 pin poking through the base. The airflow is easily adjusted and strikes the perfect balance between too stiff or too loose.

Filling the tank is an absolute breeze. Simply unscrew the top cap and beneath that you will find a red rubber stopper which you then remove to expose the fill holes. You then fill up your tank, replace the stopper and screw on the top cap. The stopper can get slick with juice so be careful not to drop it through the fill hole or down the main air tube and yes I have accidentally done this on one occasion.

Stripping the tank down for cleaning is a little bit of a pain, while it can be done some of the parts are very stiff and don't easily unscrew.

Pre-fitted for your convenience, the tank contains a 0.3 ohm dual coil and I have to say it does work very well but actually priming it took longer than usual and I had to allow twenty to thirty minutes before the cotton absorbed the juice thoroughly.

The added inclusion of a rebuildable deck is a plus point for this tank. The deck is very easy to build on and I had no issues with the screws or post holes. It certainly has a lot of airflow coming to your coils since there are two large diameter holes on both sides. Bear in mind this tank is dual coil only.

I did have a few problems with shorts when fitting the chimney cap. Typically I tend to allow clearance at the top but with this tank you run into issues if you position your coils too close to the edge. Ideally you need to have your coils as close to the centre post as possible while still being positioned over the airflow holes.

I also found the wicking a little tricky to get right. For those that own a Goblin or a Goliath it should present no problems but since this the first tank I have ever tried from Youde it was slightly more problematic for me. 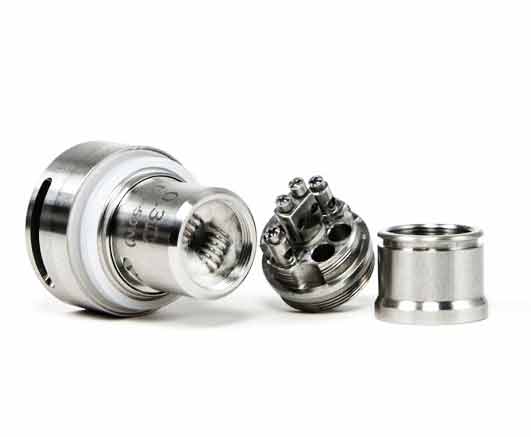 When using the stock coil I found the Zephyrus to be a quite a good vape. I have tried the tank with both Captain's Reserve Monkey Business and Captain's Custard. It gave a very blended flavour to both which were very enjoyable. One point to note is that I found it a very warm vape and I think some people will find it a little bit too much. The heat sink adapter does work to keep the heat away from your lips but it is still very hot. I would compare it to running the Herakles tank at the limits of it's coil wattage.

In consideration I'm not sure if the flavour is actually anything close to the quality of vape that the Herakles offers and to be honest I think the Zephyrus also falls short of the Cthulhu RTA as well and way short of the kind of flavour you get with the Freemax Starre and the Vision MK Tank.

In all respects the flavour is more than acceptable but I do feel the tank suffers somewhat with fruit based vapes. For desserts the warm and blended taste is ideally what you want but the moment you try a fruit e-liquid it certainly doesn't have the kind of sharp, crisp flavour you would expect. Both Red Astaire from T-Juice and St Louis from El Diablo suffered somewhat when compared to the excellent flavour I get from them in some of my other tanks and RDA's.

How it actually compares to a Goblin or a Goliath I couldn't possibly say since I have never owned or reviewed either of them. In terms of comparing the Zephyrus to a flavour chasing dripper experience then it is definitely not as good, in my opinion.

The Zephyrus does put out some good vapour but I do question as to whether its really putting out that much more than a RDA with a chuff cap. However I do like the way the vapour spirals around when you exhale because that is actually rather cool.

If you were to assess the room fogging potential of the Zephyrus then while it does still cloud up the place it takes a little longer than the Starre and the MK Tank since both of them seem to put out far more. I guess if you have never used either of those tanks then you would find the Zephyrus more than acceptable for your requirements.

In terms of flavour and cloud production when using the RBA deck then I honestly can't say I noticed that much difference to the stock coil. I would say the flavour was a little better but vapour production was extremely similar. One thing I did notice is that if you get the wicking wrong you can run into issues. At one point I had the wicking burn in half because I used too much and the second time I used too little and the tank leaked on me. Only on the third attempt did I get it right.

I have had no leaks at all with the stock coil but due to how hot the tank runs it does cause a great deal of condensation to occur underneath it when you remove it from your mod.

A very solid tank bundled with a lot of extras. I still feel the flavour isn't as good as it could be. It might be satisfactory enough but it depends a lot on user preference. If you enjoy a very warm vape then this tank will be just right for you. Vapour production is more than acceptable. The tank does have some good advantages in that it is very easy to fill and has the added bonus of having a rebuildable deck so you will never have to purchase another stock coil again.

The Zephyrus is available to purchase for around £24.99 which makes it a very reasonably priced product.