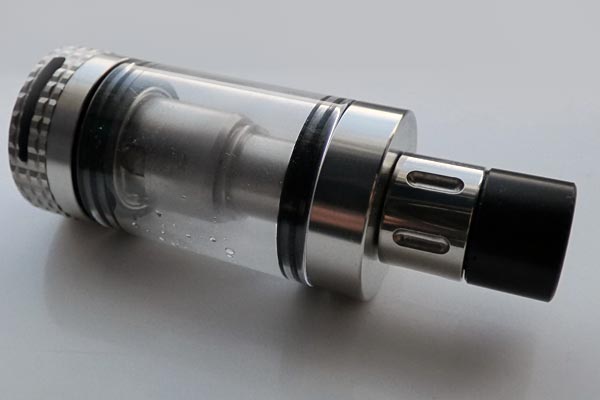 The Hkuda is a Sub Ohm tank from Rotkvapor. It features fully adjustable airflow, top filling and a large 5ml capacity. The Hkuda comes with a pre-fitted coil and in addition also includes a RBA build deck. 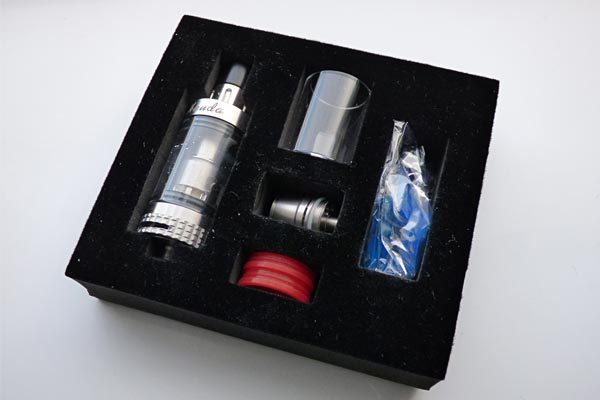 On the whole this tank has some nice styling and seems quite well put together. The glass feels suitably durable and spare glass is included in the box should you ever have an accident. The Hkuda is a top filling design and holds 5ml of juice which is a very sensible capacity for a Sub Ohm tank and it means you won’t be constantly refilling it.

The tank has very thick O-rings and if you don’t like the black ones you can replace them with the spare red ones in the box. Most users probably won’t care but it is always nice to have some degree of customization. I really did like the knurling on the airflow control ring which made it very easy to grip and adjust.

The included drip tip is made of Delrin which means it will help to keep the heat away from your mouth. One let down is that not every drip tip I tried fitted this tank, so be mindful of that if you prefer to use your own drip tips. 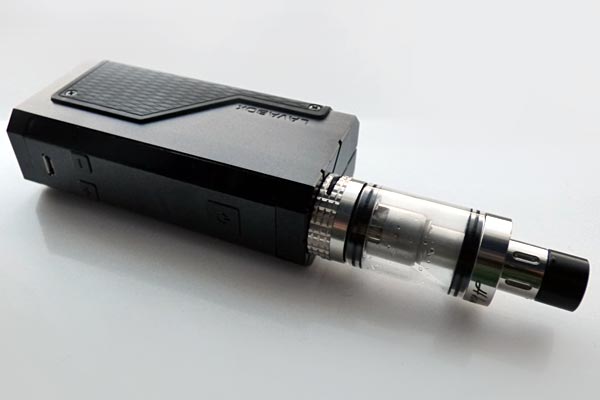 The top cap unscrews and beneath it you will find a rubber press-fit grommet which you remove to fill the tank. Getting the grommet out is easy but actually getting it to go back in was a little tricky. The raised edge of the tank makes it a little fiddly to replace the grommet and it took me longer than I would have ideally liked.

Replacing the coil or fitting the RBA deck is very straightforward but actually removing the base of the tank was a bit awkward since it was a very stiff fit. I assume it is done to the very thick O-rings so I advise you to lubricate them sufficiently if you purchase this tank. Another little problem is that when removing the base you tend to end up pulling off the airflow control ring which to be fair is easily replaced. To make life easy for yourself pull off the airflow control ring first before unscrewing the base. 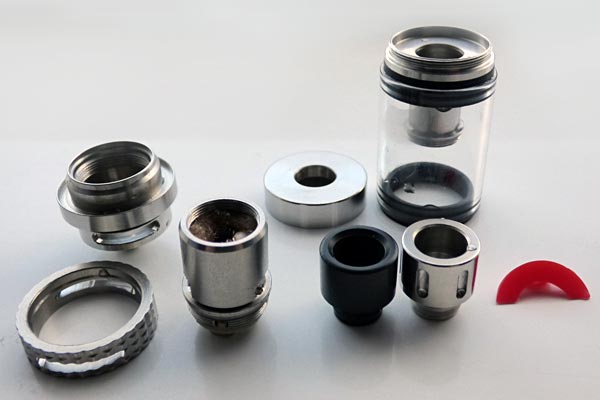 The tank features two fully adjustable Cyclops style airflow slots and one nice feature is that the airflow control ring is knurled making it easy to adjust.  I found the Hkuda to have quite a nice draw and the airflow was good without being overly airy. You can just about get away with a loose mouth to lung vape if you heavily close down the airflow but realistically this is a tank for lung hitters. 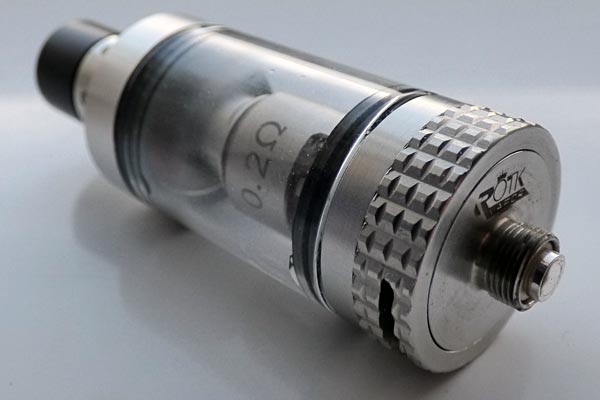 I primed the pre-fitted 0.2ohm coil and filled up the tank with The Collective Seven No.3 (by Manabush) E-Liquid. After allowing a sufficient amount of time to pass I started vaping at 25W and I got very little flavour and vapour at this wattage. I then increased the wattage to 30W and then to 35W, flavour was a little more distinct and there was some heat but not a great deal of vapour. I quickly found that this coil needed a minimum of 40W to get something from it but 45W limit of this coil was probably where I got the best results. Although in my opinion it wasn’t a very good vape, there is heat and vapour production but the flavour itself seems rather indistinct and overly flat. It would be unfair to say it was flavourless because there is noticeable flavour but I think what I am really trying to say is that it is only average and nothing to write home about.

There is some element of the individual flavour notes coming through but the overall taste seemed muted. In many ways this coil reminds me a lot of Youde’s Goliath V2 and Zephyrus coils and I wasn’t a huge fan of those either but in the case of this tank Youde’s coils are much better. I suppose if you liked those coils then you might find this one to be acceptable. Vapour production with the pre-installed coil was good but there are other tanks on the market that put out far more with much better flavour.

I do have to point out that the coil itself looks a bit rough and ready. The cotton wicking is far from being nicely packed and looks very uneven. The coil wiring looks a bit wonky too being unevenly spaced and I really think Rotkvapor should make a better job of them.

The coils while far from brilliant do improve somewhat after a sufficient amount of time vaping so I think it’s fair to say that there is some break in time although they are still nothing outstanding in the flavour department.

One plus side of this tank is the fact that it includes a RBA deck so you can make your own coils. The RDA deck is dual coil only and it is less than ideal because the post holes and screws are tiny. I put a dual 28AWG Kanthal build in there and I must admit I found it very fiddly. I guess if you have smaller hands than me you might find it easier I think if you were to use 26AWG Kanthal then it might be something of a struggle to get the wire through those post holes. I wicked the coils with Cotton Bacon and then primed them with No.3 E-Liquid.

Despite the RBA deck being something of a pain to work with I must admit it does result in quite a decent vape and it certainly outclasses the included pre-made coil. If you are happy building your own coils and the small size of the RBA deck doesn’t put you off then this tank might be worth a try but in my opinion the RBA deck could do with some improvement.

While I didn't experience any leaking issues while the tank was in use I did find it did leak if I left any juice in it overnight and that was with the pre-made coil fitted. The leaking seemed to be mainly under the tank so I suspect the problem is with the coils or the 510 pin. 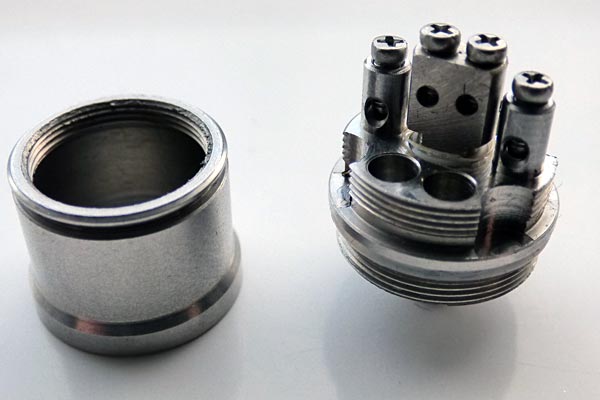 In many ways the Hkuda is something of a flawed tank and it’s a shame because the box contents are generous, the build quality is decent and the top filling and 5ml capacity are very welcome features. Unfortunately the included coil is not a very good vape and the manufacturing quality is somewhat lacking. The RBA deck is a nice addition but it is let down by being awkward to work with having tiny post holes and screws. I would only suggest you only make use of it if you have a lot of experience working with small builds and dual coils otherwise it will just lead to frustration.

Sadly the Hkuda is only an enjoyable vape with the RBA deck and a very forgettable one with the pre-made coil. It is my hope that Rotkvapor improve on this design and possibly concentrate on making this tank a dedicated RTA because it seems that is where it has the most potential to do well.