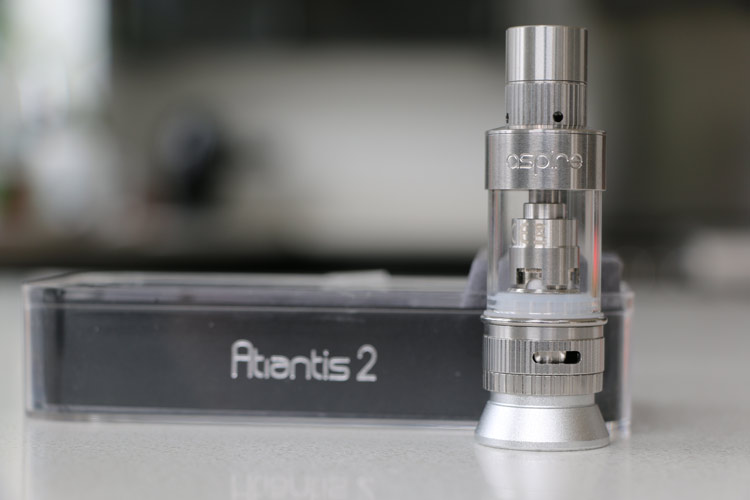 Introduction to the Atlantis 2 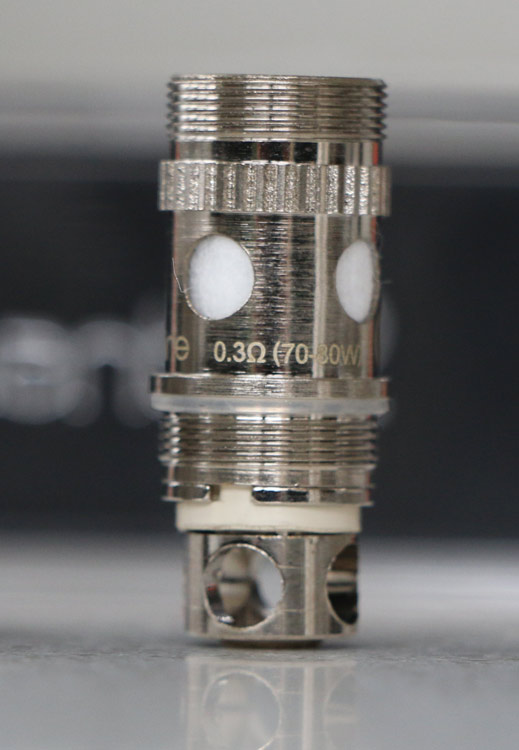 The Atlantis tank should need no introduction but for those of you not familiar with the product here is a bit of background.  In November 2014 Aspire announced the release of the a new tank, the Atlantis.  This was one of the first of a new breed of sub ohm tanks that were shipped with pre-built coils that measure below 1 ohm in resistance.  Aspire were already well known the Nautilus range of clearomiser as well as the new-user targeted BDCs, but the Atlantis was out there in terms of innovation.  At the same time Kangertech announced their sub ohm tank - the Subtank - and the battle ground was set.

There are now many of these sub ohm tanks on the market and the stock 0.5 ohm coil of the Atlantis is starting to look a bit old-hat with several of the new breed supplying stock coils at 0.2-0.3 ohms and, of course, the Subtank, which has a rebuildable base unit which allows you to build your own at lower resistance than the stock 0.5 ohm coils.

So, what else could Aspire do but come out again with an update.  The Atlantis 2 is due to hit UK shores next week and we were kindly sent one to try out a couple of weeks ago.  So, having had some time to spend with this tank, we are pleased to be able to give you an insight into this new, improved version.

Delivered in the same hard plastic clamshell casing as its predecessor, the Atlantis 2 was delivered safe and secure.  It was completely clean or oil or machine smells - good to go out of the box as far as I was concerned.  The unit ships with one coil already in place and one in the underside of the packaging, the 0.3 ohm coil was pre-fitted and a 0.5 ohm coil as the replacement. 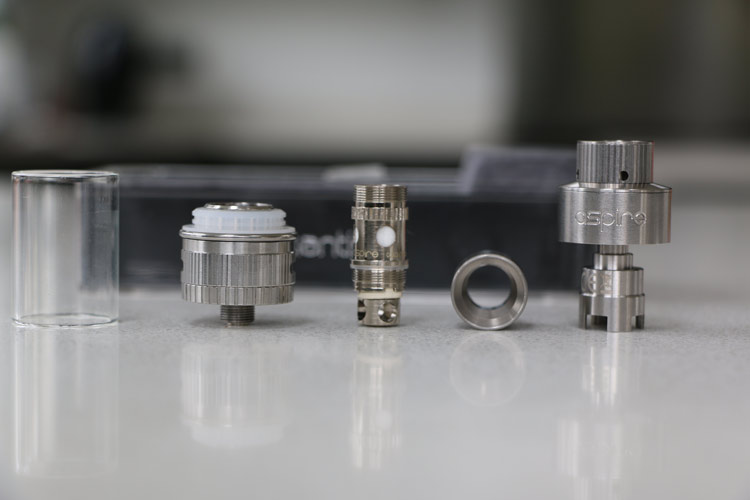 No replacement glass tank in the copy that we were sent, unlike the previous version - with these retailing at £5 a pop this may be of concern to the clumsy vapers out there but this did not concern me.  Chances are I will now drop the tank and break it, but the glass is a really good thickness so I am hoping I haven’t tempted fate...

There have been several improvements in the Atlantis 2, so let’s go over them first before we talk about how well they work.

Aspire have listened to the community’s comments about the wicking material.  The crumbly ceramic material is gone, replaced with Japanese cotton - a good move on their part, we will see if it helps with flavour at all shortly. 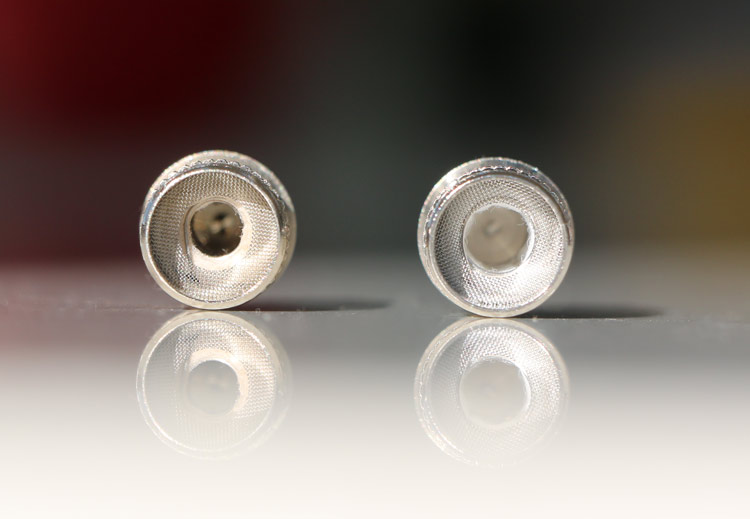 The coils are constructed from US produced Kanthal wire and the top of the coil head is covered with some wire mesh - the same as the original heads.

The size of the wicking holes have increased massively as well - I have spend too long on this review already and can’t be bothered to stand up and reach for the calipers to measure but a quick check in photoshop suggests they have grown by 50%.

Not only this but the bottom of the coil now sports four air inlet holes as opposed to the two that feature in the original Atlantis heads which helps to increase the airflow up through the coil. 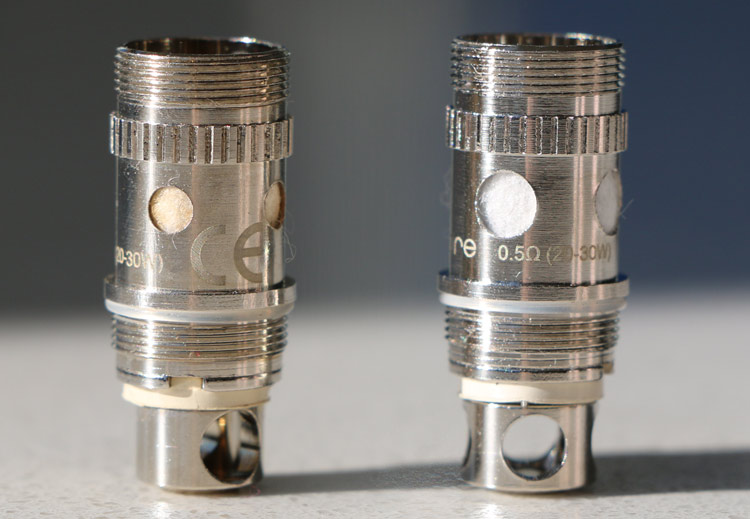 The last change that I could see is that the internal diameter of the coils has increased too.  Again this allows a much greater volume of airflow up through the centre of the coil which should lead to greater vapour production.

The capacity of the tank has been upped from 2ml to 3ml which was well needed.  This version will vapourise your juice at a faster rate than version 1 so even at 3ml you will be topping this bad boy up far too frequently.

I have already mentioned the changes to the coil heads to allow an increase of airflow through them.  To get the extra air into the base of the tank Aspire have added an extra airflow inlet to the base assembly.  If you have one of the original Atlantis tanks then look at your tank and imagine a second inlet opposite the first!  With this one little change they have now doubled the air intake allowable with the tank.  The air inlet holes aren’t as big as the Freemax Starre but they are more than ample.  The airflow at the base can easily be changed with the tank fixed on to your mod - the airflow ring has nice grooves in it and the ring moves freely.

The airflow ring clicks nicely into place and there are a couple of points where this clicks - both sides fully open and one side about half clear and the other side a quarter or so clear.  These are set sizes and of course you can play with both to part close the vents off but they won’t click into place but I don’t see this as a problem. 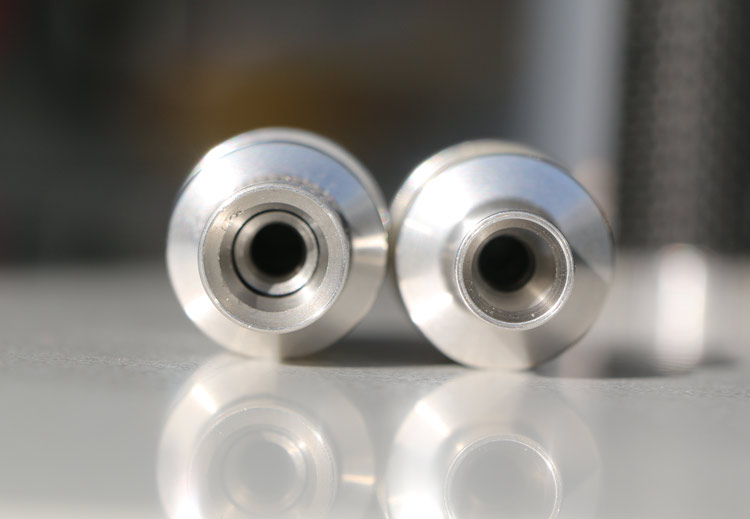 The drip tip deserves the biggest mention though, for two reasons.  Firstly the size of the thing!  I can almost fit the Starre drip tip into the Atlantis 2, it is massive.  It is a custom size, no standard drip tips I own fit it, unlike the original Atlantis which was a standard size.  Now, there is a reason for this...

The second change - the new airflow control in the top of the tank.  As you can see from the image above, the head assembly of the tank contains a separate air flow control.  Initially I thought this was a pretty pointless gesture - why add more air to the mix once the air has already passed the coils?  I have seen a few drip tips out there with airflow control (2Puffs are the main ones that have caught my eye) and I can say, hand on heart, that it really does make a heck of a difference.

At 80W the Atlantis 2 is too hot for me, open up the airflow below the drip tip and it’s a winner!  Come on, let’s vape!!

No messing about this time with piffling 0.5 ohm coils - let’s go straight for the jugular and fire up the 0.3.  Fill it up with some 80VG / 20PG homebrew custard and on to the Sigelei 100W it goes.  As with the original it is a cinch to fill, no leaks, no spills, just easy.  Just like the original I have carried this about with me quite a bit, left it led on the desk etc and it hasn’t leaked a drop.

At 0.3 ohm I initially fired it at 45W and it wasn’t quite there.  Up to 50W and the Sigelei shows 4.1V - that’s about tidy for me.  The vape is warm and the clouds are big.  The taste is a good improvement on the original Atlantis coils due to the cotton so that’s one of the big complaints about the v1 nailed.

Now, up to 60W and the vape is getting warm unless you pull on it quickly.  So open the top airflow - that’s what it is there for after all!  60W is 4.4V and the vape is too cool with the top airflow full open.  So, crank it up.  70W - 4.8V - this would usually be getting a bit warm for me but with the cooler air being pulled in from the bottom of the drip tip this is good.  The clouds are big and the flavour is still strong.  Superb!  75W - 5.0V and the vape is warmer but the flavour still good.  Push it up to 80W and even with all the airflow full open it starts to get a bit warm - but the flavour is still good.  I could crank it up more but I have already vaped at 100W with the Starre and I feel no need to do it again here. 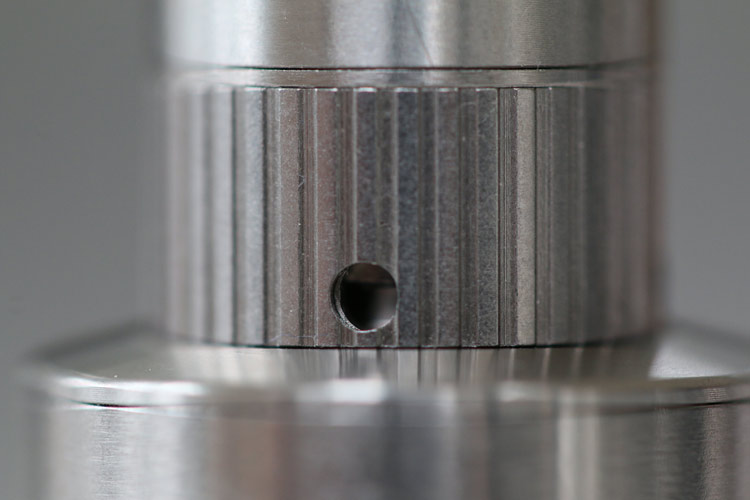 Tank depleted so let’s change it up.  I got some ANML Looper from no1ejuice on recommendation from dw1986.  I had seen it around and it looked OK.  I won’t spoil it too much as there will be a review coming on that liquid soon but all I can say is OH MY WORD!  Now this combination kicks severe butt.  I did not wash the tank out, just waited until the custard was pretty much gone and loaded it up again.  Within three draws the custard was gone, even on the first pull I could taste the new flavour pulling through heavily.  I have vaped on this coil for two weeks with a few different juices and it has been the same each time.  Coil lifetime is really good here and swapping up liquids is a breeze. 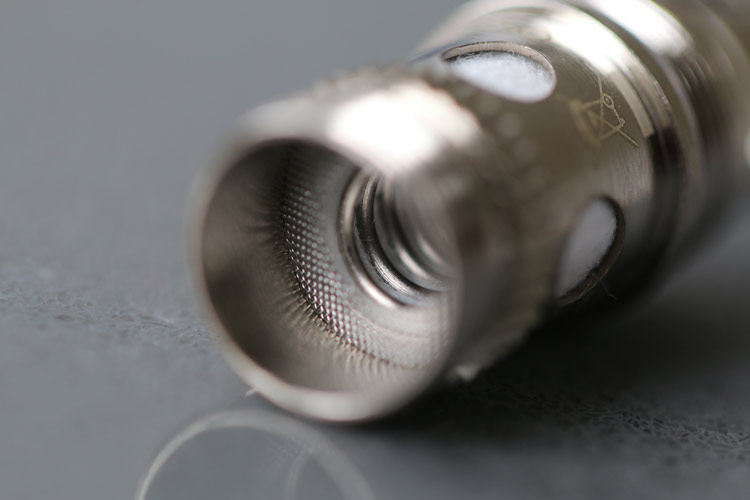 The airflow configuration is superb on this tank, lock down the lower airflow and the top at low watts to push the flavour, whack the whole lot open and crank up the power for big clouds AND flavour.  Or hit the middle ground - whatever suits your style and your juice - with this tank and the variations in coil resistance you can get and the airflow settings you are free to play around.

For me and my Looper though, 65W and the airflow full open was just right - I look forward to hearing what everyone else who gets one thinks.

I can’t wait for next week as I am definitely ordering up a couple more of these as I like to have a lot of flavours on the go.  I know I only said a few weeks ago that the Starre was the tank of the moment but this, especially at the kind of price I have seen pre-orders on, could well be the go-to tank for April.

Feedback to Aspire from the forum when this was announced was - we need the rebuildable deck.  To me that would be good but not a deal breaker.  Yes people do say that the stock coils are an expensive tie in but with coils costing a few quid and lasting for weeks then I don’t see them as a major expense compared to the faffing about with building. Let’s see what they can do for the Atlantis 3.

This is a excellent upgrade to what was an OK tank.  The airflow updates and the changes to the coil are spot on as far as I am concerned - good work Aspire, these should fly off the shelves.