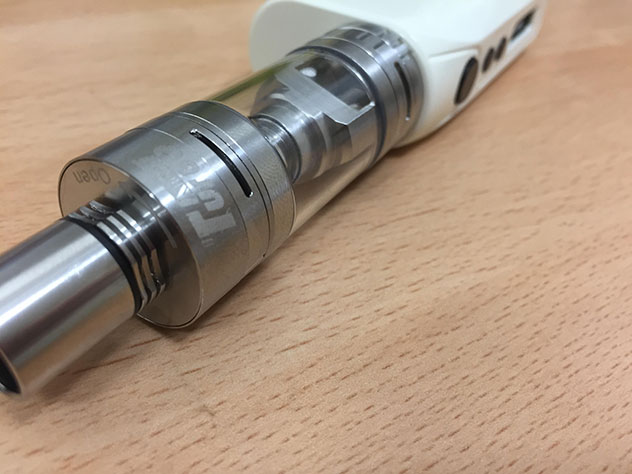 The original Horizontech Arctic Sub Ohm tank was a great tank on paper than unfortunately was massively let down by very poor build quality of the tank itself, leaking issues and extremely questionable quality control on the coil heads, that was widely reported across the vaping fraternity by reviewers and consumers alike. It seems like Horizontech listened to the feedback, and have come up with the Horizontech Arctic Turbo, which has been redesigned from the ground up, the only resemblance to its predecessor being the name.

Most interestingly the Arctic Turbo also sports a coil configuration never seen before in any other sub ohm tank I am aware of, with three dual vertical coils placed independently of each other in the base of the tank, and the Arctic Turbo can be run with either one, two or all three of these coil heads in place, and Horizontech claim the coils can handle up to 120 watts. The coil placement is a really interesting feature and something I was really keen to test out! The whole tank itself sports a completely different look to the original Arctic tank, with top and bottom airflow included, a whole new appearance and a bump in capacity to 3.5ml.

Does the radical redesign from Horizontech make for a killer sub ohm tank? Let’s find out… 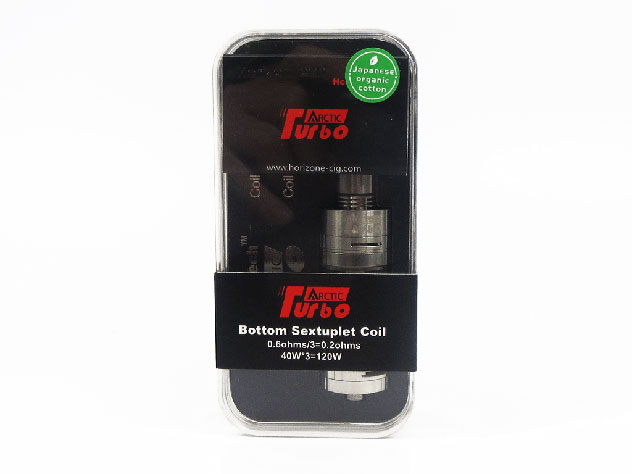 There’s a fair amount included in the retail box here, inside the packaging you get: 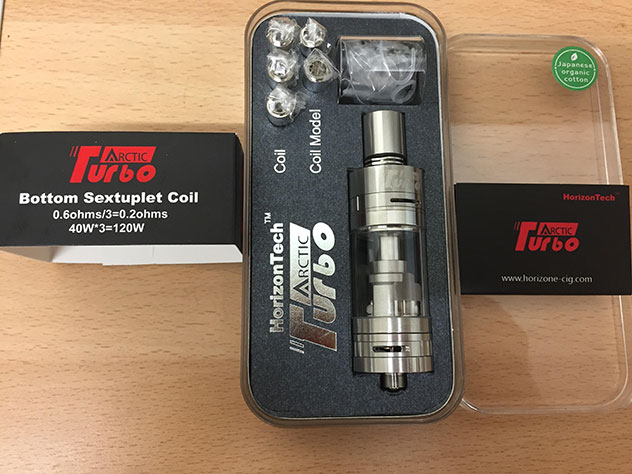 It’s worth taking time out to read through the user manual to get a grasp of how the coil system works, and if you are new to sub ohm tanks this does contain important safety information.

Looks wise, the Arctic Turbo bears no resemblance to it’s predecessor, the Horizontech Arctic Sub Ohm tank. If you took the logos away and stood these tanks side by side, chances are you wouldn’t even know they came from the same manufacturer. The capacity has received an increase to 3.5ml and the Arctic Turbo is a taller tank than the previous version, there’s an even wider bore drip tip as well as top and bottom airflow. 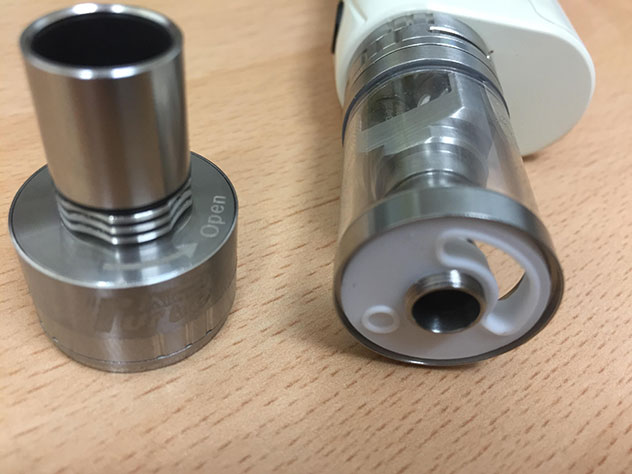 It’s constructed of stainless steel with a pyrex glass tank section, and in hand it feels solidly made. It’s a little on the tall side, one of the tallest tanks I have come across for sure, but I can’t have complaints about the build quality. It’s top filling, so the top cap screws off to reveal the top fill port, which is a nice wide slot able to accept pretty much any bottle nozzle you can think of. Inside here is also a small removable fan, known as the Top Turbine Cooling System, which helps even more to cool down your vape as well as provide a level of spitback protection too. I will say one thing, and that is the Top Turbine Cooling System definitely creates a loud whistling noise, which some users may be uncomfortable with, if it does bother you then you can remove the fan without affecting the vape too much I have found.

With a top and bottom adjustable cyclops airflow slot the airflow is absolutely gargantuan with the Arctic Turbo, the huge bottom airflow maximises airflow intake for huge vapour production, the top airflow will cool your vape down at high wattage when wide open, or keep it warm when closed off. I’d highly recommend keeping it open when going above 70+ watts, as with it closed things can get uncomfortably hot. The airflow control ring itself is smooth and easily adjusted, and when you have set it to your desired airflow setting it stays in place until you change it. Airflow is also influenced by the Top Turbine Cooling System, which spins to cool the vapour down and also, Horizontech claim, increase vapour production too. 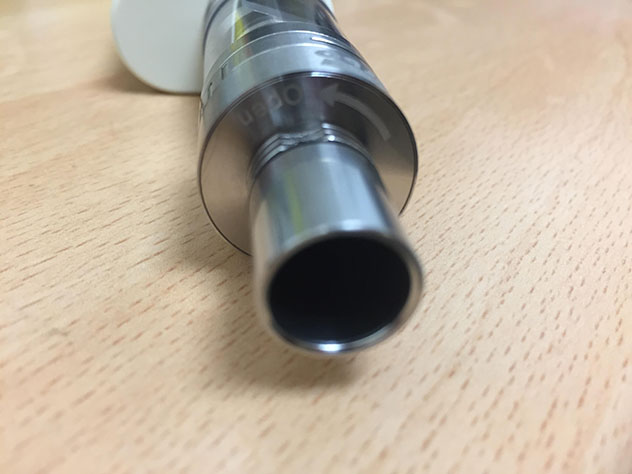 As we have covered above, the Arctic Turbo sports a new coil system that has three individual dual vertical coils each inserted separately from each other into the deck. Each of these new BTDC coils has a resistance of 0.6ohms and with three of these together, you have a final resistance of 0.2ohm. You can use one or two of these coils rather than all three, simply by swapping out the BTDC coil for one of the coil stoppers, however I didn’t get terribly good flavour or vapour production by using any less than three of the BTDC coils.

The new BTDC coils are a big improvement on the old problematic Arctic coils, with a much more solid build quality and there’s no need to boil them before use this time around! Each coil is a dual vertical coil set up and is 0.6ohm each, and the lifespan of these is far better than it was the first time around too, with the coils lasting me two weeks before needing a change. You can replace individual coils, so if one burns out it can be swapped out for another. 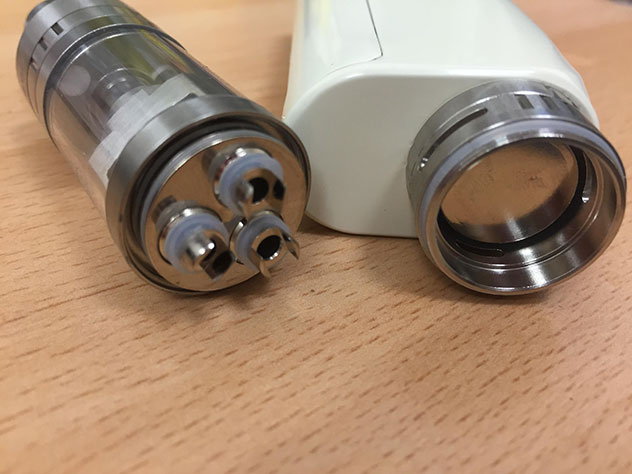 I have found that you need an absolute minimum of 60w to get going with this tank, anything less just results in a very weak experience. At 80w, this tank really starts kicking out some quite incredible clouds and when you go over 100w and start approaching the 120w mark, it’s really quite something else. Just ensure you have the top airflow wide open when over 100w as otherwise it really does have a tendency to get scorching hot! Flavour with this tank isn’t particularly impressive, it’s an improvement on the original but it is still average at best, but that’s not what this tank is about- this tank is all about throwing down the biggest clouds humanly possible. I’ve been running it at 100-110w and just having some great fun with it chucking some huge clouds of vapour around with high VG juice and generally annoying my missus by clouding out not just rooms but entire areas in seconds!

With a cloud chasing sub ohm tank, chances are you will be using high VG juice to maximise your cloud performance, and the Arctic Turbo is great at wicking high VG juice. I used juices at up to 90VG and the Arctic Turbo wicked them with ease, it didn’t seem to struggle with the wicking aspect at all and I have only experienced two dry hits with this tank. That being said, it’s an extremely thirsty tank, even though the capacity is 3.5ml you will be going through tanks of juice in no time.

If you are looking for a high power tank with huge airflow that can really chuck the clouds, then look no further than the Horizontech Arctic Turbo, as this is quite arguably the very best of the bunch when it comes to flinging out the vapour! There’s not many tanks around that can match the Arctic Turbo on sheer vapour production, coupled with high VG juice and 80+ watts of power you’ll have in your hands a portable fog machine that can cloud a room out in seconds.

It’s good to see Horizontech have righted the issues raised with the original Arctic tank, with the Arctic Turbo providing coils of a much better quality this time, and a tank with a far better build quality that hasn’t leaked on me as yet. Plus, it can handle the high power, though it does get a little warm! If cloud chasing is your thing and you are looking for a tank that throws the biggest, and densest clouds, then the Horizontech Arctic Turbo is the one I would recommend!

This item was sent in to us to review by the team at Sparks Ecigs - as well as the online store they also have shops in High Wycombe, Aylesbury and another opening soon in Hemel Hempstead so pop in and see them if you live in these areas as they have a really good range of products in store. 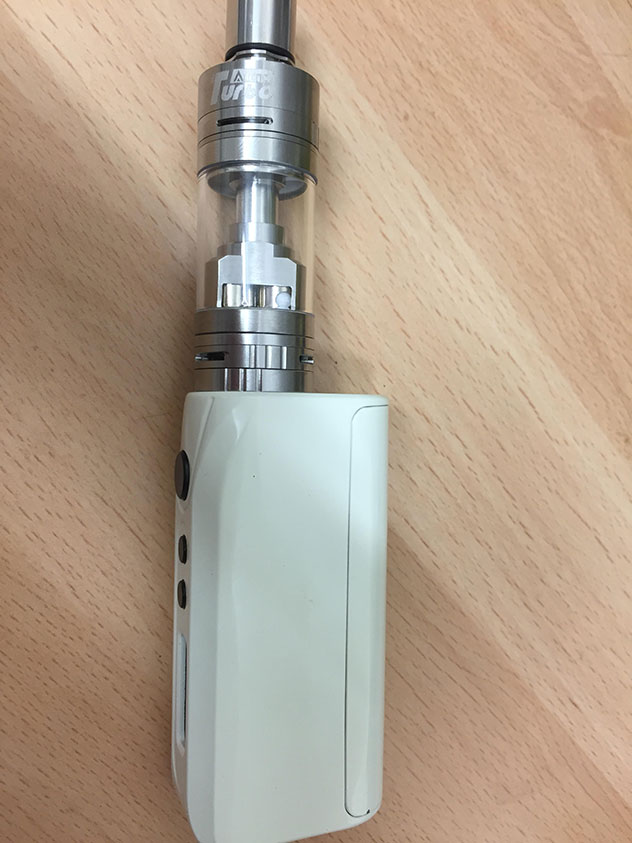