Introduction to the Herakles

Sub Ohm tanks are a dime a dozen these days, a new one becoming available almost daily, production lines in China going into overdrive in order to satiate the demands of cloud chasing vapers everywhere. The choice is overwhelming and these days a new release really needs to be offering something special in order to stand out from the rest of the competition and convince the savvy customer base to part with their hard earned cash...

Enter the Sense Herakles. Produced by Sense Technology Company Limited, a relative newcomer to the market having been formed in 2014 and based out of the manufacturing hotbed of Shenzhen, the Sense Herakles promises to offer performance on a level with the best rebuildables out there, handling high wattage with ease whilst still offering outstanding flavour and vapour results, and a unique finned airflow control design to optimise performance. There has been an awful lot of hype about the Sense Herakles online, it offers much on paper, but does it deliver?

By now, you might be thinking ‘great, another week another Sub Ohm tank’ and wondering what possibly could make the Sense Herakles strike down the rest of the competition? Read on to find out... 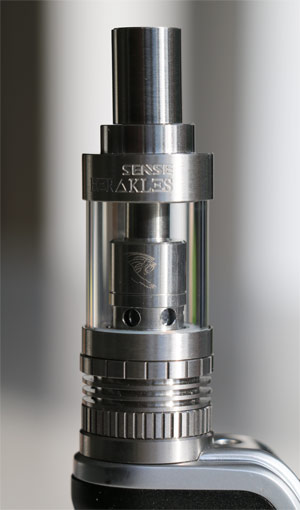 Keeping in line with the Greek Mythology theme of which the Herakles name pays homage to, one of the first things you notice is the Greek style font used for Herakles matches the theme, looking closely at the chimney you find a lion logo visible on the chimney itself resembling the Nemean lion, which King Eurystheus commanded Herakles to destroy as his first labour in Greek Mythology.

The tank itself is composed of a stainless steel construction, with a pyrex glass tank section. it’s really solidly built. The finish is nice and shiny and with the Herakles having a 510 connector and a 22mm width it will sit flush and look pretty on the vast majority of mods. The airflow control ring is definitely different to the others out there, the most striking aspect being the heat fins present on the airflow ring.

Drip tip is composed of a heat resistant delrin inner and 510 connector, and a stainless steel outer shell, this helps keep the drip tip cool during high power usage. It’s something I haven’t encountered on a tank before and the design works really well, as I didn’t experience the drip tip getting hot once during use. Of course, if you wish to use your own you can, as the drip tip is removable and compatible with other drip tips.

It’s definitely uniquely designed, that is for sure!

Capacity wise you get 3ml with the Sense Herakles, which is not an awful lot when you consider how much juice the Sense Herakles gets through! Refilling is a simple case of unscrewing the glass section from the base and filling to the side of the chimney, which sounds easy but can be a little difficult for some users, as the base of the chimney is wide and you can only truly fill this to the top by leaving the coil screwed into the chimney so no juice leaks through the holes at the base of the chimney. I wouldn’t worry too much though, as you will get plenty of practice refilling the Herakles considering how thirsty it is, you absolutely will be refilling this often!

It’s one of the thirstiest sub ohm tanks on the market, and the more power you put through this the quicker you will drain your juice. I have had no issue draining two tanks in an hour when running the Sense Herakles at 70w! 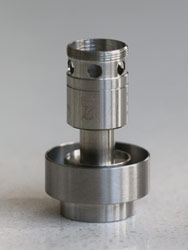 To sum up the airflow it ranges from wide (at the tightest setting) to ridiculously huge, and whatever setting you have the airflow on you are going to get some big vapour volume. The airflow control ring is a joy to use, very user friendly and tactile.

The coils themselves, whether 0.2 or 0.6 ohm, are both dual vertical coils wicked with Japanese cotton. As with most, they do need priming, so before using the Sense Herakles you want to make sure that you have primed the coil with juice, by putting a few drops onto the coil itself, filling the tank and allowing it to stand for 10 minutes, then start off low on the wattage and work your way up until you find your desired sweet spot. There are 5 generous juice holes on the coils themselves, and combined with the 6 wicking holes on the chimney itself you can wick even the highest VG juices with ease. 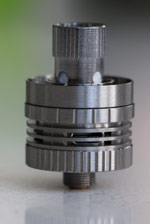 Performance wise I found that the the 0.6ohm coils can indeed be run up to 100w, which I find incredible. I highly recommend running the 0.6ohm coils at a minimum of 40w, and as high as 85w if your mod can support it, as this is where I got the best results for flavour and clouds. Wattage less than 40W gives too weak a vape for me, on both aspects, at more than 85w the vape becomes very hot and flavour seems to drop off. I took the 0.2ohm coil from 45w up to 105w and in my opinion it yielded the same results as the 0.6ohm coil, but I managed to get an extra 5w of performance from the 0.2ohm coil before the vape got too hot and flavour dropped off. The flavour produced by the Herakles tank is incredible, as is the vapour production. My preferred setting is 50-55w, but this varies depending on the juice I am using, but at this range the flavour is outstanding, vapour volume is huge and the vape is nice and warm, just how I like it.

Compared against other Sub Ohm tanks out there, the Sense Herakles is amongst the very best, the price point is spot on, flavour is amongst the best I have tried, and it blows excellent clouds. Combined with the fact that it is designed for high wattage use to get the very best out of it, whilst still retaining a cool-ish vape at high power thanks to the delrin drip tip and unique airflow control, and we have a real winner on our hands.

The Sense Herakles with the IPV 4 in temperature control has become one of my favourite set ups, with the balance of flavour and vapour that I crave, it is the setup I currently take out and about with me more than any other I own!

You can win a Herakles tank in our competition - competiton ends 18th July 2015.