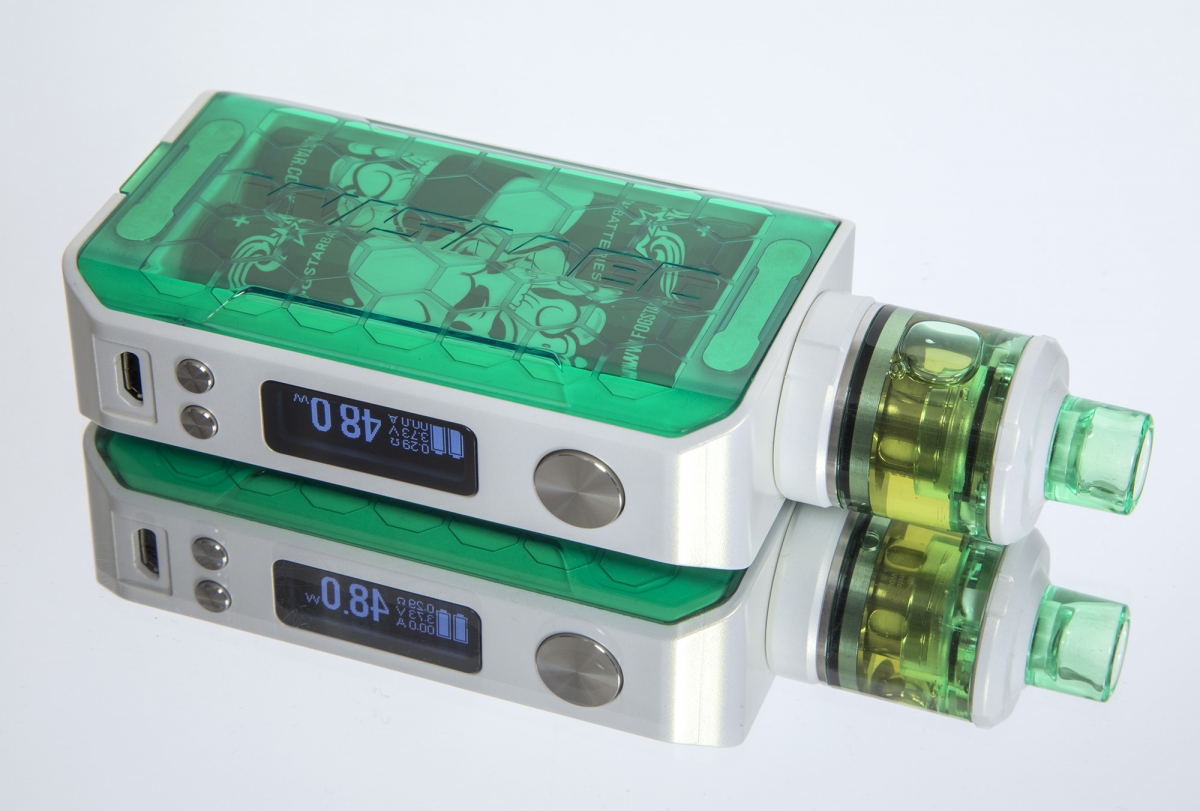 Supplied for review but as always this will not affect my thoughts and opinions on this review.

This review ironically is going to be similar to its name 'Sinuous' with one of its definitions Twisting & Turning, I've never come across something I should dislike for many reasons but it won me over in the end.

So onto the review: 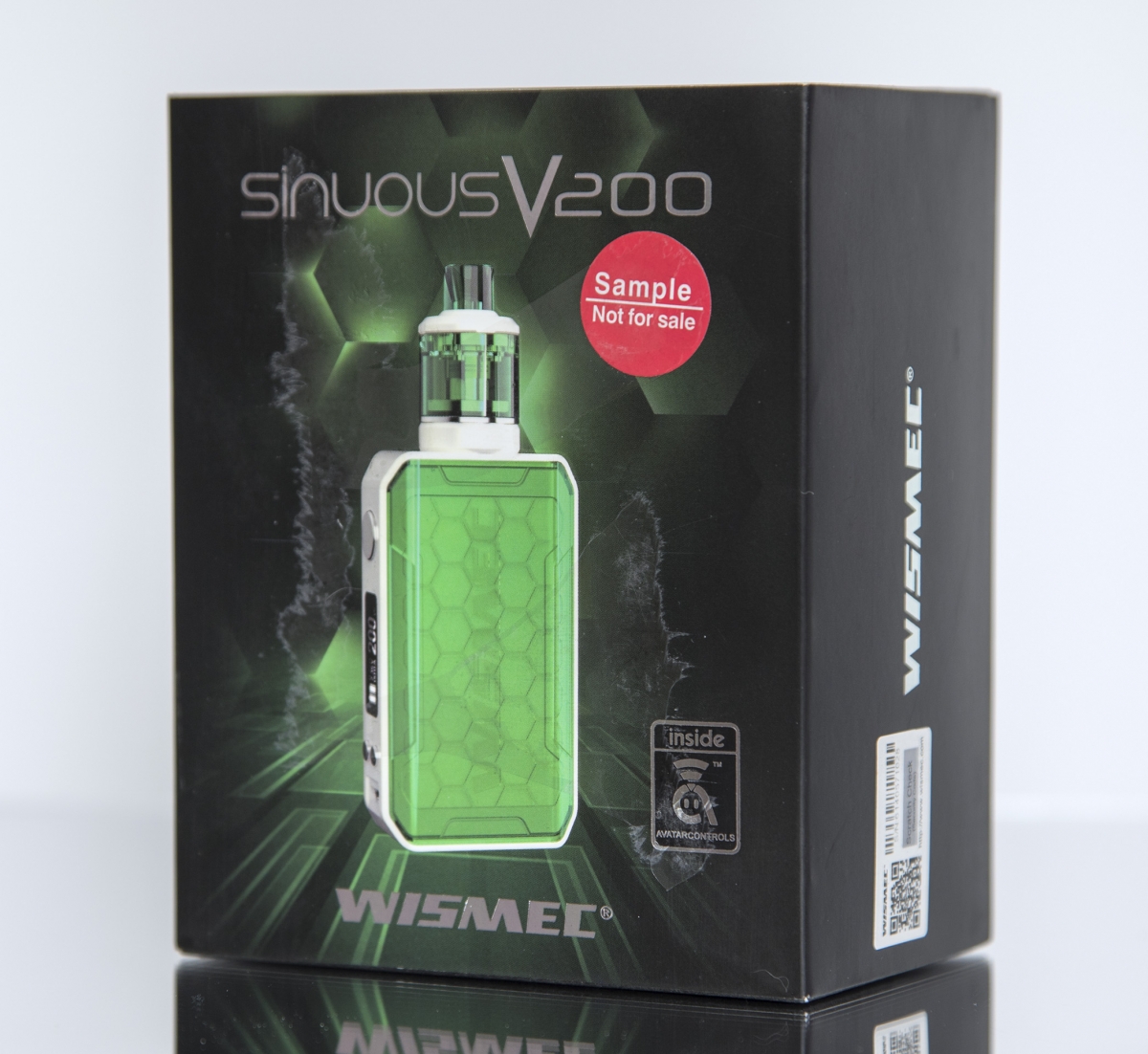 In this review I will cover:

(read on if you want to know why)

Nothing surprising opening the box, the standard mod, tank, coils & spares, though the manual was pretty detailed. 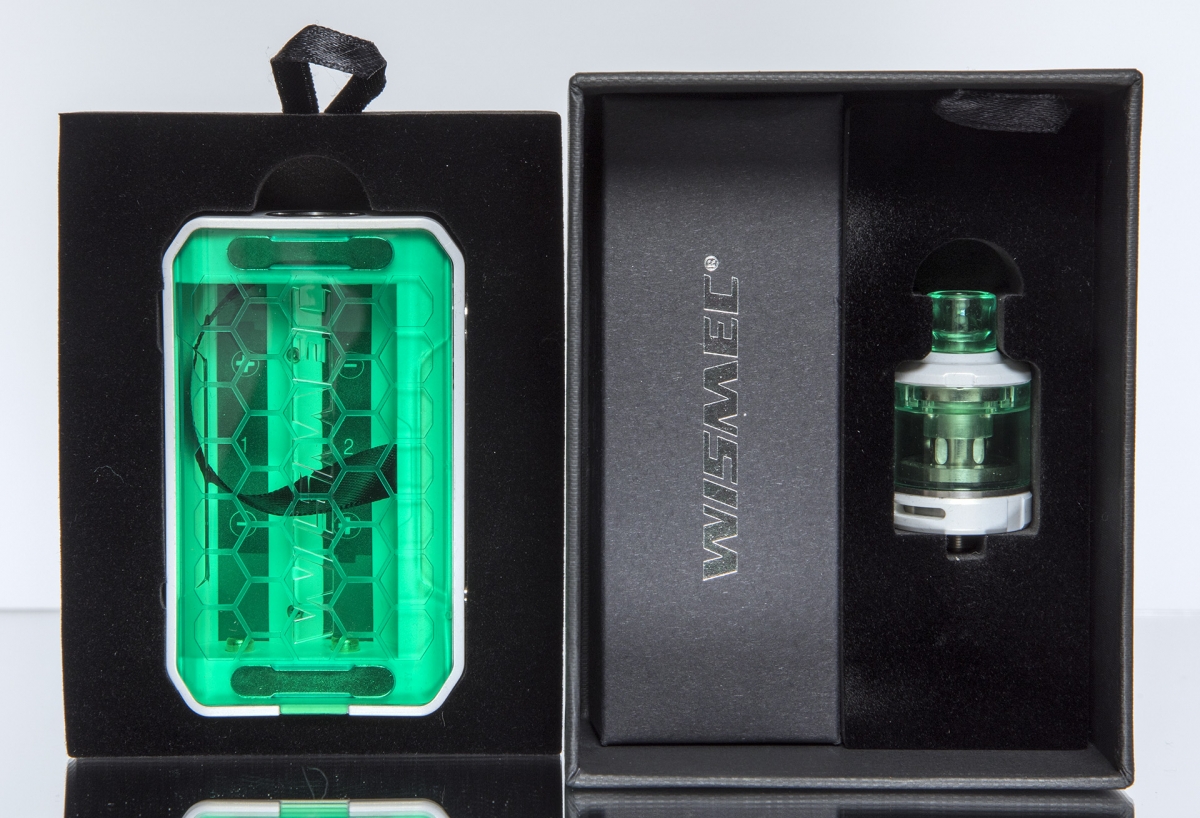 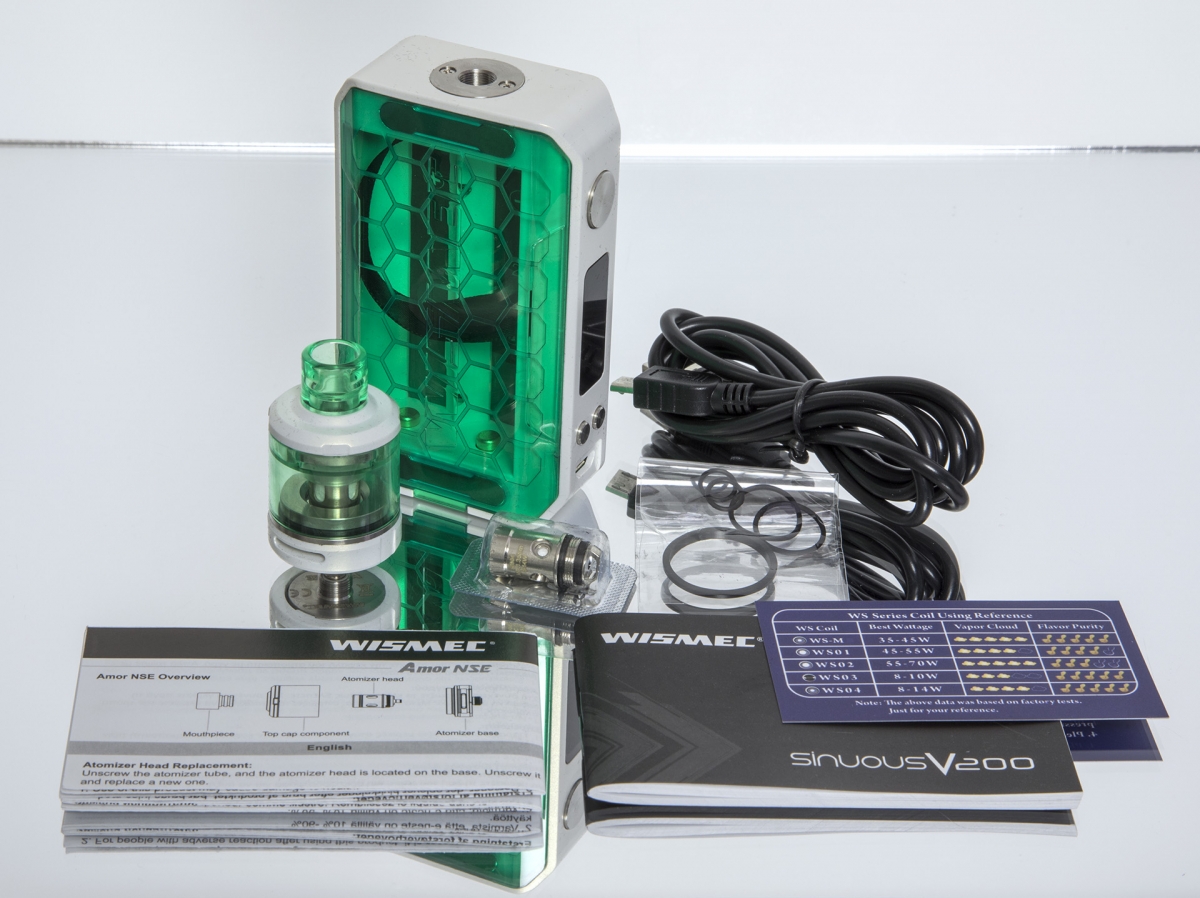 I have to admit it was almost instant 'What a piece of cheap crap!' first impressions especially the tank, it all felt like a toy with it's mainly plastic construction and very lightweight flimsy feel to it, though after popping a couple of batteries in and booting it up for the first time it's charm started to creep in, the battery door was a nice solid magnetic snap fit, the clear battery labels were a nice touch also, I primed the pre-installed mesh style coil and got myself familiar with the mod as I photographed it.

It's really hard to describe how it grows on you, it kind of reminded me of the charm the old Pulse mech had, cheap and cheerful, despite its seemingly hard corners it felt pretty comfortable.

It's the tank that I disliked the most, it's like something Poundland had knocked up, mostly plastic and couldn't be stripped fully, more on that later.

Construction is a lightweight, hard wearing plastic with what appears to be Aluminium buttons.

I'm not going to be too critical of the cheap construction of this mod as Wismec have designed it to be a 'Budget' kit, in fact it's a pretty decent mod, with the batteries in it feels a sturdy bit of kit and feels good in the hand, the ergonomics are also pretty good, I find I can hold it multiple ways and thumb or finger fire, the board & menu is old and trusted with the basic settings most users need and reasonably easy to navigate, it's menu is almost the same as the Eleaf Pico Squeeze 2.

Battery life is very impressive, a pair of 18650's with the mesh style coil vaped at 55 watts lasted me almost 3 days of exclusive use, with the MTL coil at 11.1 watts (yeah I'm OCD) on day 5 and around 50% battery remaining which is the beauty of a basic chipset.

Inserting the batteries is simple, pop off the magnetic door, the bay has clear polarity labels and battery numbers which is rarely seen, spring loaded negative pin makes them slip in with little resistance and battery wrap friendly. Also removing the batteries is as easy with its ribbon, there are no battery vent holes and no evidence of air getting in or out. I blew some vape into the batteries and shut the door, no vape escaped so that's a negative.

There's no rattle on the buttons or panel, only 1 panel is removable for the battery door which has a very slight wiggle to it but hardly noticeable, it would have been nice if they both came off so you could change the colours.

It has a micro USB in the standard smiley face orientation at the base for charging (Not recommended) and firmware upgradable.

The screen is a bit on the dim side and hard to see outdoors but plenty bright enough indoors or in the shade or dark. 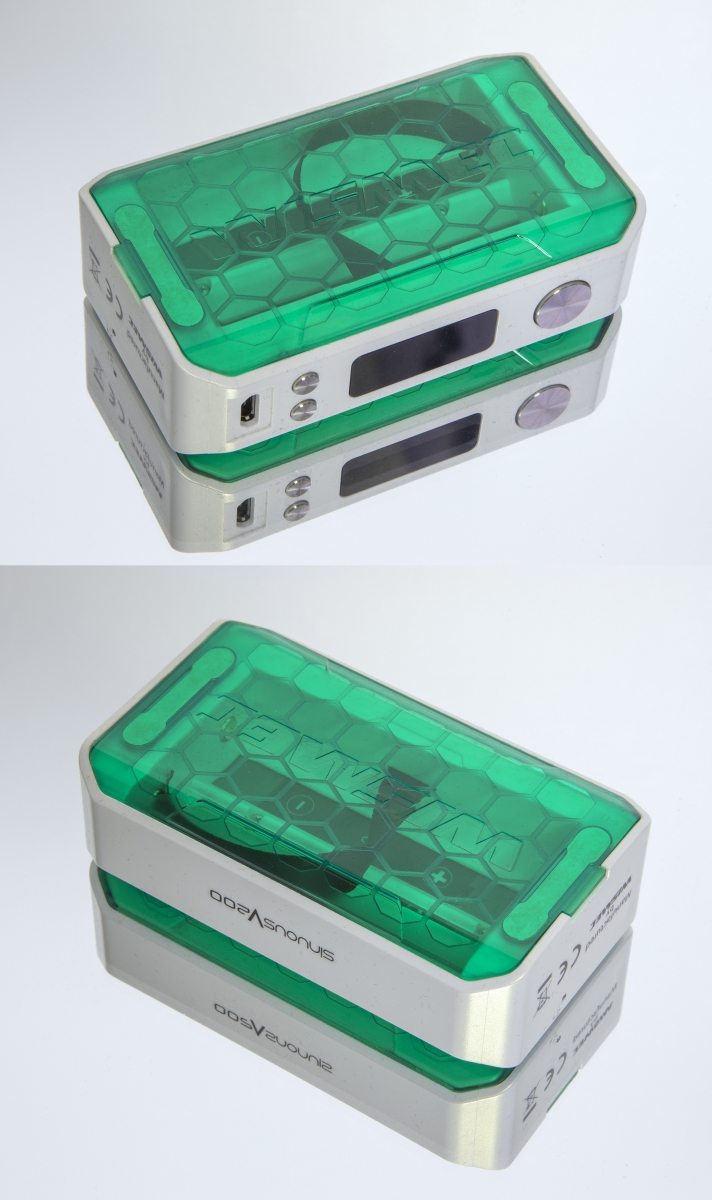 Its panels are really nice, with a honeycomb design and the WISMEC logo embossed into them, large yet not loud as they blend in nicely, the other markings are on the base and side, again nothing too loud and looks good. 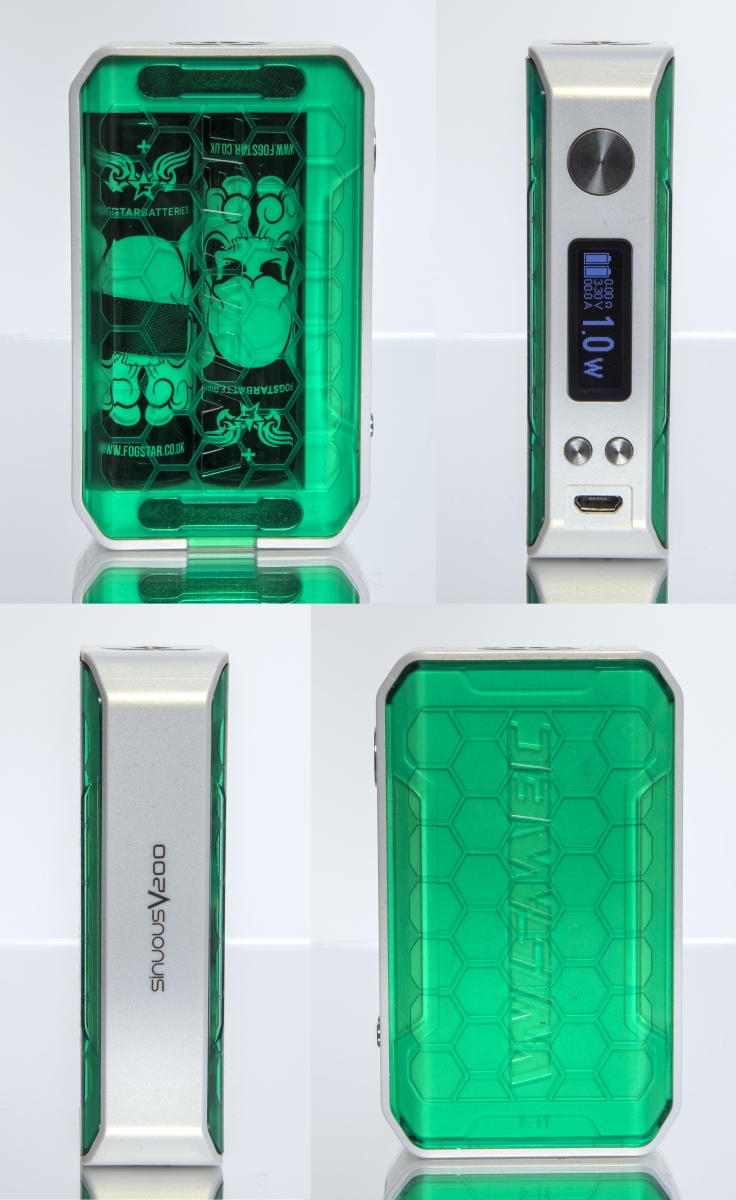 Menu features via the 0.91in OLED Screen are simple to navigate, 3 clicks to access with 3 memory settings, various Temp Control options, hold down the up/down buttons to lock the adjustments, hold down the up button & fire button together for a few seconds to enter the options menu where you can tweak a few settings such as what's displayed on the screen.

Nothing I would ever bother using though I did like the detailed battery voltage level which featured each batteries state. 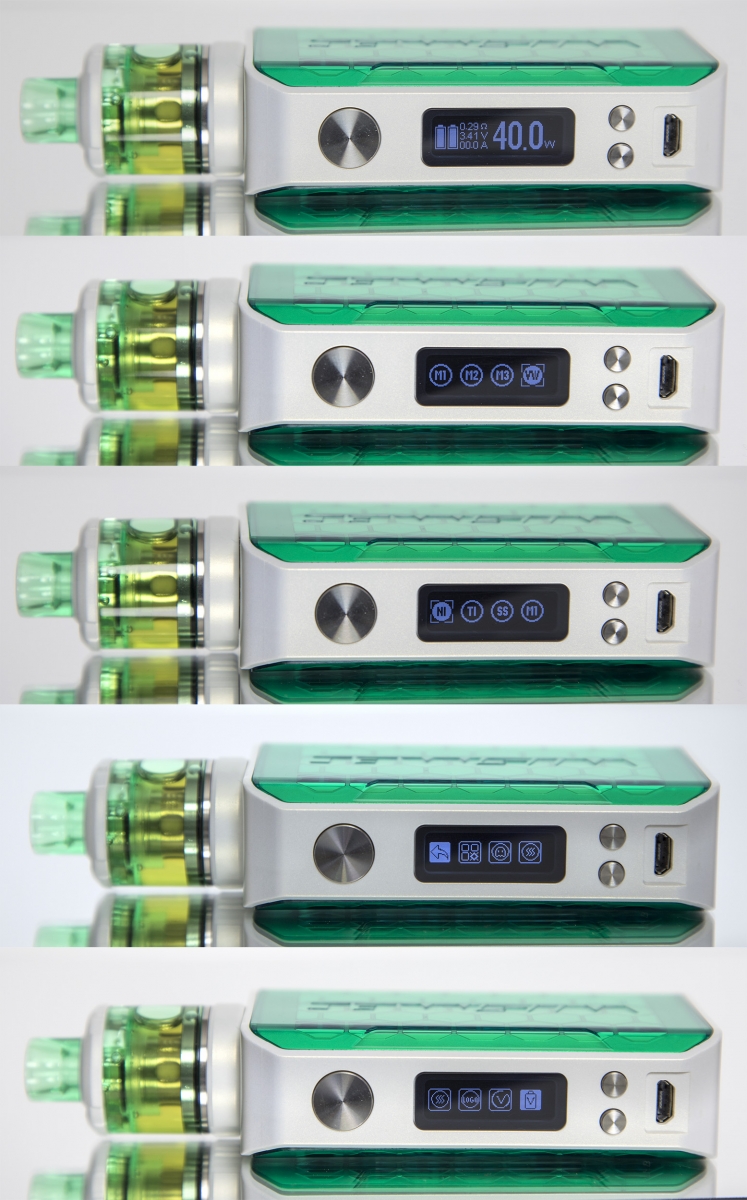 There's little more to say on the mod, it's basic with no outstanding features.

So onto the cheap looking 'Poundland' styled tank, despite my rather cruel 1st impressions this held a pleasant surprise which is mostly down to the coils, though it really suited the mod perfectly, together they made a great looking setup. 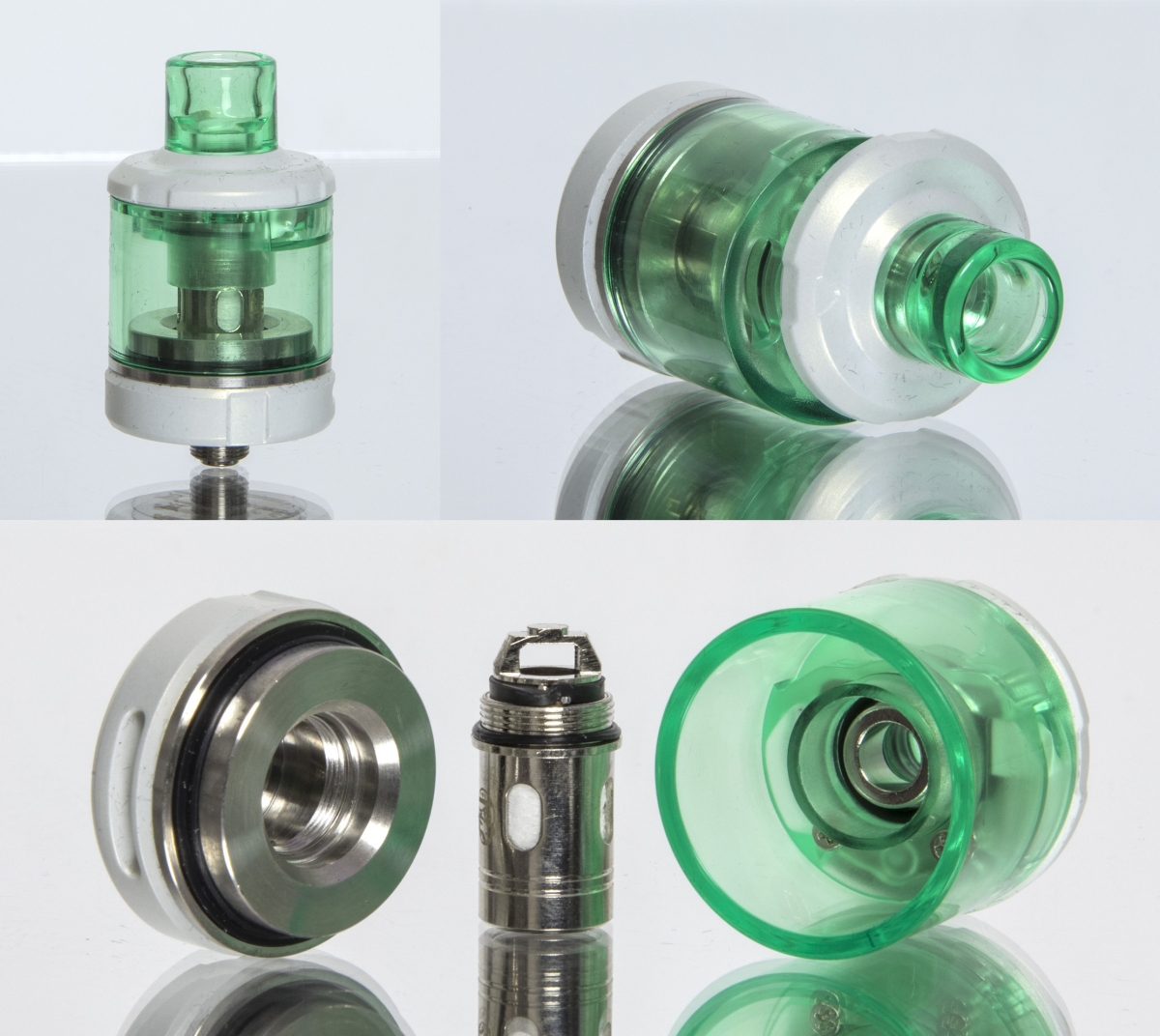 My main disappointment was its construction, there's no glass and the plastic section is all in 1 piece, the top filling section is also attached so if you crack the tank it's bin fodder, that said its simplicity is also a strong point and very new user friendly, very easy to install a coil and fill up with its top sliding cap, the drip tip is removable and standard 510 so you can replace it (which is definitely a must for the MTL coil).

The bottom airflow ring is dual setup for DTL and MTL, slotted for DTL and 2 small holes for MTL, a nice feature.

The coils that came with this kit I first thought were ridiculous on paper, a 200 watt mod: 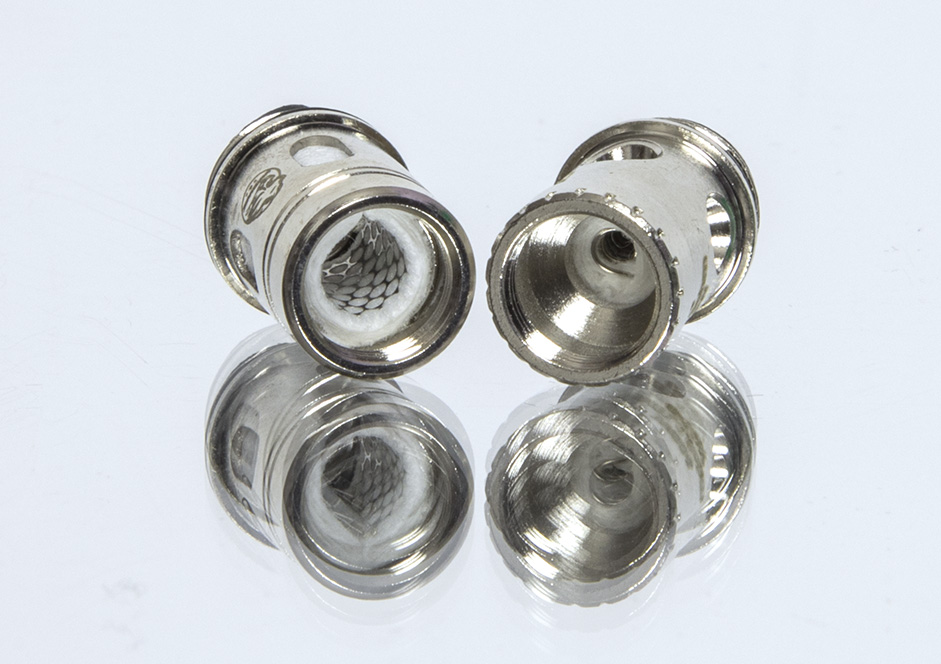 Seriously?!! - why would you bundle low powered coils in a high-power mod?

This was a serious con for me and put me in a negative mood before trying them, so anyway I primed the mesh styled coil using Pomme Apple Strudel juice, as with most mesh coils I recommend adding juice into the bore of the coil as well as the side ports, I filled the 2ml capacity tank which was nice and easy with the top slider and let it sit. 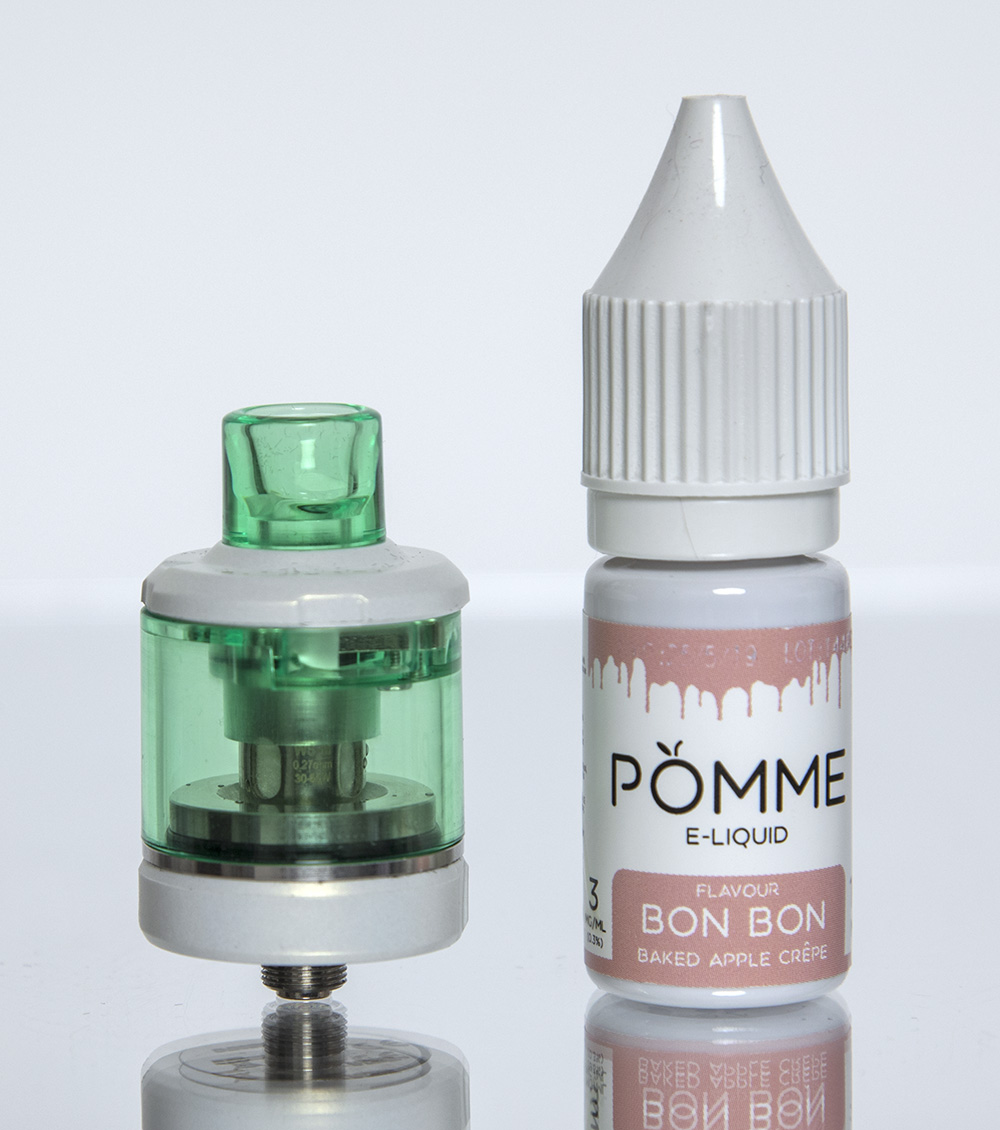 So with my low expectations I popped outside to give it a test, started at 40 watts....... I was like 'holy cow that's good!' crept the wattage up to 55 watts and it was outstanding, I was blown away at the amount of flavour this low powered coil gave, this experience really brought a smile to my face and after having a vape I brought the kit in with a whole new perspective on it, I was slowly falling in love with this kit.

As with my reviews I exclusively use the mod and tank for at least 4-5 days, but I found myself still reaching for this kit out of preference.

After a couple of weeks the 1st coil strangely just died, no dry hits or flavour loss, it just stopped working and shorted somewhere, very odd, but this meant I could move on to test the MTL coil:

Primed, adjusted the airflow ring over to the single hole for a tighter MTL draw, shoved the wattage to 9 watts, put some SALT Peach nic salts into it, took it for a vape, the DTL coil was great but this MTL coil was equally good if not better, though the wide bore drip tip spoiled it a little, no biggie I threw on a smaller bore 510 drip tip and bloody loved it, this tank is exceptional, versatile and economical on power and juice consumption, all it's cheapo negatives were soon forgotten I really love it.

That said it's still a daft setup, the 200 watt mod is overkill for both coils, the tank is a superb option for a single battery mod and there's a Sinuous V90 single battery option which I think looks much better and suits this tank more.

I've put a lot of thought into this, I am honestly stuck as what to compare it to, it's like nothing I've tried before, I think it would be unfair to compare it to other higher price mods and I don't own a budget regulated mod kit (only Mechs) so I've decided to leave this out.

My main gripe is that for its 'budget' price tag (RRP £49.99) you can get a better kit in the sales and older mods that are reduced in price outperform this kit, for example I bought the best Smok kit I've tried for £37.99 which makes a mockery of this budget price tag, if this kit was sub £30 then I would say it's great value.

Putting the price tag aside, the Sinuous V200 kit really won me over, the looks really grew on me, it almost has that Space 1999 look to it, the cheap construction never crosses my mind now, the tank though under powered for the mod is the perfect match, I have tried other tanks on the mod but it's like "No!" and put the Amor back on.

Would I buy this if I broke or lost it?

As much as I would miss it, I would have to say no I wouldn't replace it due to its current price tag.

I was fortunate not to have to pay for this kit but I've written this review as if I had so it reflects consumer experience, if you can find it cheap either now or in the sales it's a good choice.

Also with the coils there's hope for the competition to come up with lower wattage high flavour mesh style coils, something like the Freemax Mesh Pro at 50 watts delivering flavour like this would be great.

So that's about it, I hope you found my personal experience review helpful, as always comments, corrections and likes are appreciated, all helps motivate me to do more reviews.