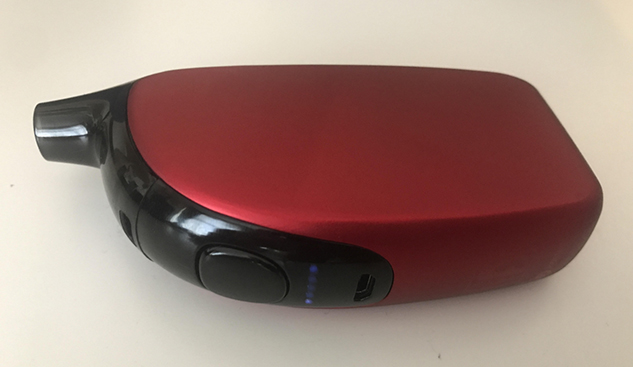 The Atopack Penguin is a new sub ohm starter kit from industry heavyweights Joyetech, who are responsible for releasing notable devices such as the eGo AIO, Cubis and the eVic VT to name but a few. They have a lot of hardware that they have produced over time that has been specifically designed for new starters, the the Atopack Penguin is their latest starter kit.

Featuring a completely unique appearance and airflow system, the Joyetech Atopack Penguin features two coil options, a 0.6ohm mouth to lung coil head and a 0.25ohm direct lung coil head. The European version of the Atopack Penguin has a 2ml capacity, in line with current TPD legislation, and an 8.8ml capacity for the rest of the world. An internal 2000 mAh battery recharged via USB is also found with the Atopack Penguin, meaning you should get plenty of usage between charges. 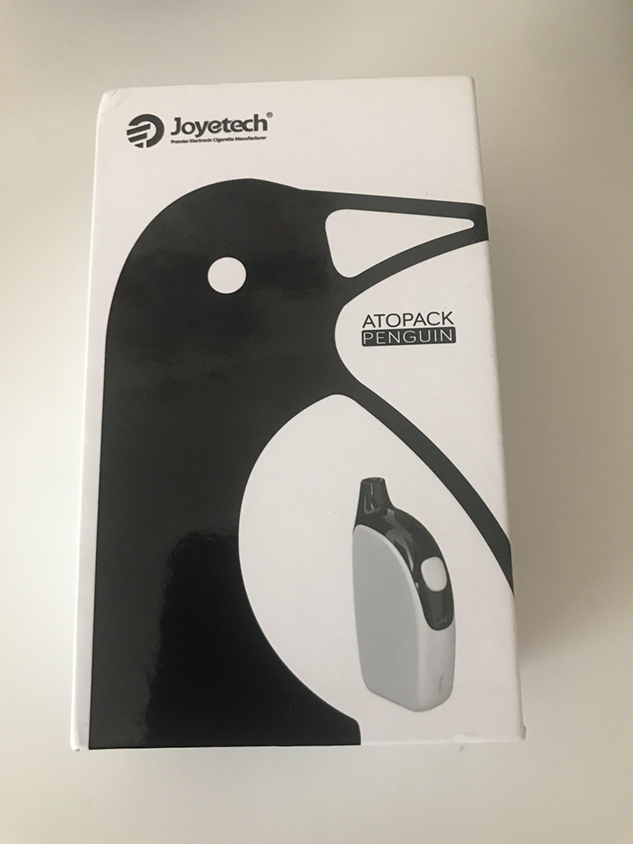 The Joyetech Atopack Penguin starter kit comes with the Joyetech Atopack Penguin device itself, an Atopack cartridge, a 0.6ohm mouth to lung JVIC coil head, a 0.25ohm direct lung JVIC coil head, a USB cable and a user manual. Replacement coil heads are available through the Joyetech website and through authorised resellers, you can also purchase spare cartridges as well which can be handy for quickly swapping flavours around on the move. 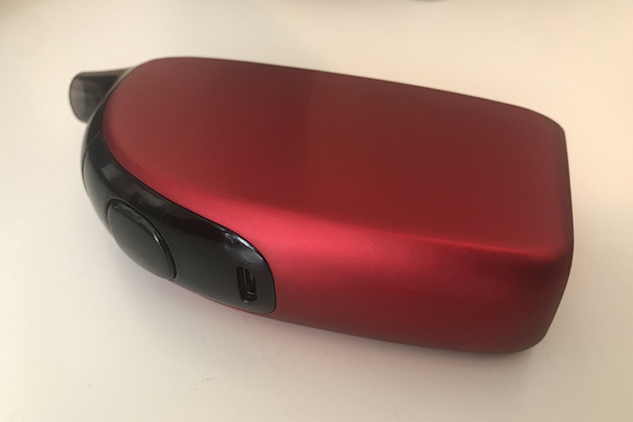 Joyetech modelled the design of the Atopack Penguin on the animal itself, and you can see the design cues they have taken from an actual penguin in the device. It is a lightweight, curved device measuring in at 26.5mm x 52mm x 102.5mm that really does have a unique look about it. It has curved edges so that the mod feels nice in your hand, size wise it fits in my hand just perfectly. The power button on the front of the Atopack Penguin is of a good size, easy to reach and responsive, underneath the power button is the LED battery light indicator and the USB port for charging. Both the mouthpiece and the airflow hole are built into the removable cartridge, which has a 2ml capacity in the European market and an 8.8ml capacity in other markets.

Overall I feel that it is a lovely looking little mod, that is comfortable to use and lightweight as well. It certainly ranks up there with the most unique bits of kit I have had my hands on for sure!

Firstly, you'll need to select either the 0.6ohm mouth to lung coil head or the 0.25ohm direct lung coil head, and prime it for use by dripping some eliquid into the top of the coil head and at the top and bottom of the coil itself. Next, you'll need to fill the cartridge with eliquid through the fill port at the base, then insert your chosen coil making sure that you have a tight seal. Leave it for five minutes once done, to allow eliquid to fully soak into the coil head. 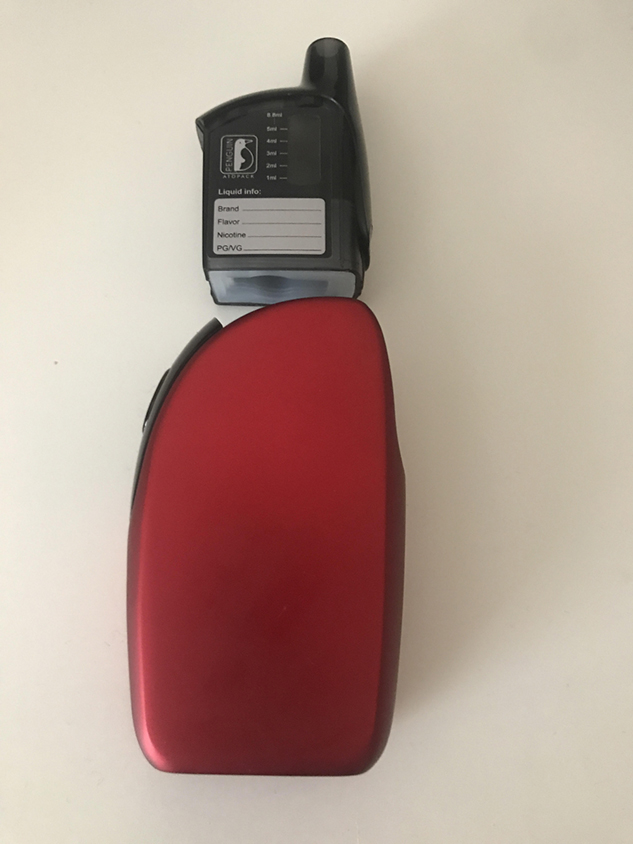 A 2000 mAh battery is built into the Joyetech Atopack Penguin, which was lasting me at least a full days use. It is recharged via USB, and also supports 2A fast charging as well. An LED battery life indicator is present below the power button, which consists of five circular light indicators. If battery life is between 90-100%, then five light indicators will show, if it is between 70-89% then four lights will show, 30%-69% will show three lights, 10-29% will show two and 1-9% will show one. From experience, if one or two lights are showing then you will want to get to your charger quickly!

Alongside the ten second cut off, additional safety protections are built into the Atopack Penguin. Short circuit protection, low battery voltage protection and low resistance warnings are all present to add a layer of safety. 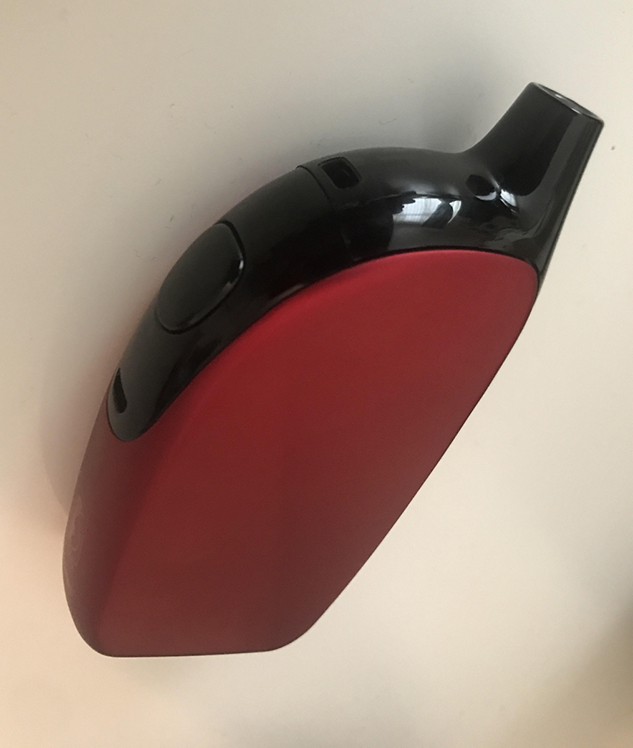 Top marks go to Joyetech for the design of the Atopack Penguin, they have come up with a really unique looking bit of kit that stands out from the rest of the starter kit market, with a really nice feel to it and a lightweight body. Build quality feels spot on, and it looks like a real high end starter kit! There's a range of different colours available as well meaning that you can grab one to suit your own preferences.

One issue I had with the Joyetech Atopack Penguin was with the 0.6ohm mouth to lung coil head, I wasn't happy to only get less than two days usage out of this coil head before it was unvapable, and the vape quality wasn't all that great in the first place with a muted taste coming from my eliquids. This was using 50/50 and 60/40 VG/PG ratio eliquid, and a quick search reveals that I'm not the only one with these issues. There seems that there may be a QC issue with the 0.6ohm coil heads, and with most new vapers wanting a mouth to lung style vape when they first begin vaping it would be a wise move for Joyetech to perhaps re-evaluate these coil heads.

That being said I have no real issues with the 0.25ohm coil head, this did offer a very decent vape, with good flavour and vapour produced. I'm also well into a week's worth of daily usage from this coil, using eliquids with mix ratios from 50/50 to 70/30 VG/PG, and the coil head is keeping up just fine with no noticable flavour or vapour degradation. If the situation with the 0.6ohm coil heads can get rectified, then Joyetech have got a surefire winner on their hands that genuinely caters for both mouth to lung and direct lung vapers! 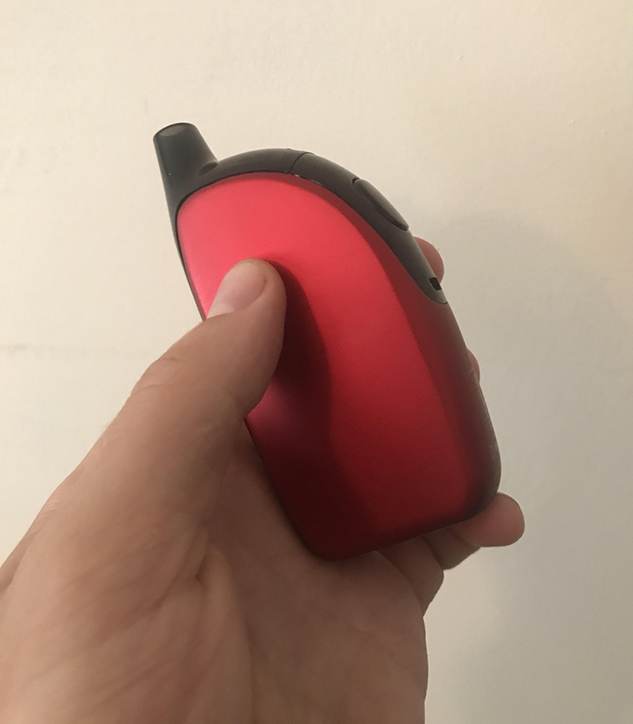