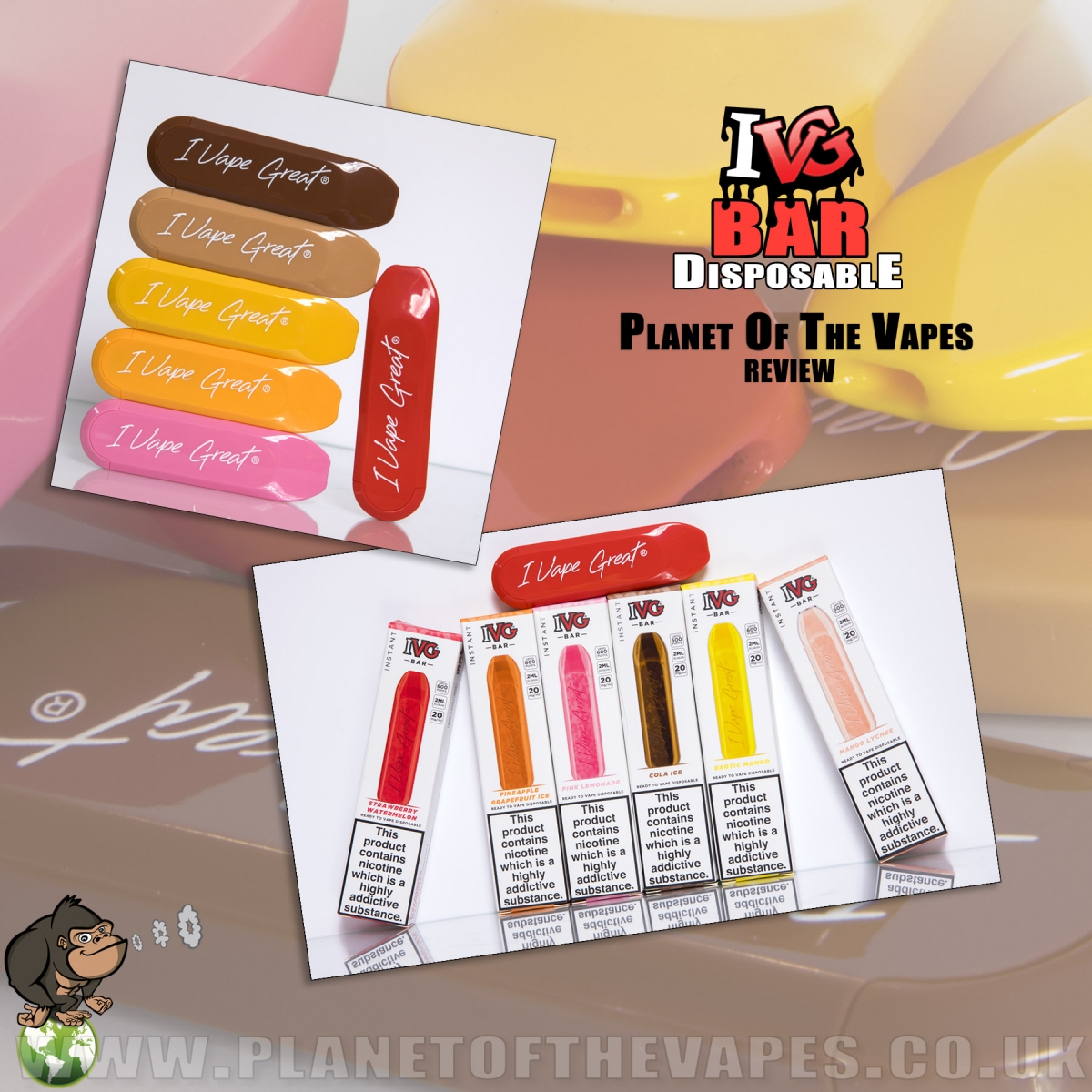 Love 'em or hate 'em, disposable vapes are here to stay, and personally I can see the value to them, especially for folks trying to quit smoking. IVG have brought out a vast selection of flavours in the new IVG Bar range, I got to test a handful of them, and it turns out I was in for a treat! 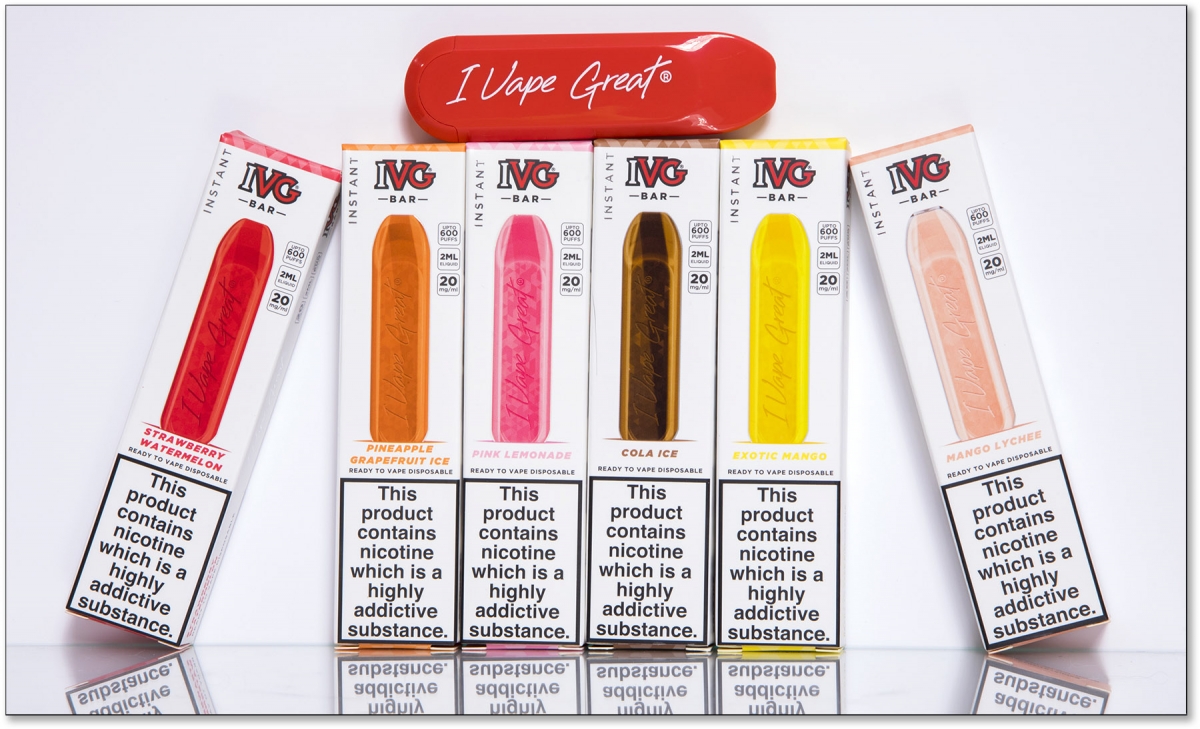 For anyone new to disposable vapes; vaping doesn’t get any easier than this and they are instant right out of the packet, in fact it’s easier than smoking. I honestly wish these were around when I tried to quit smoking. 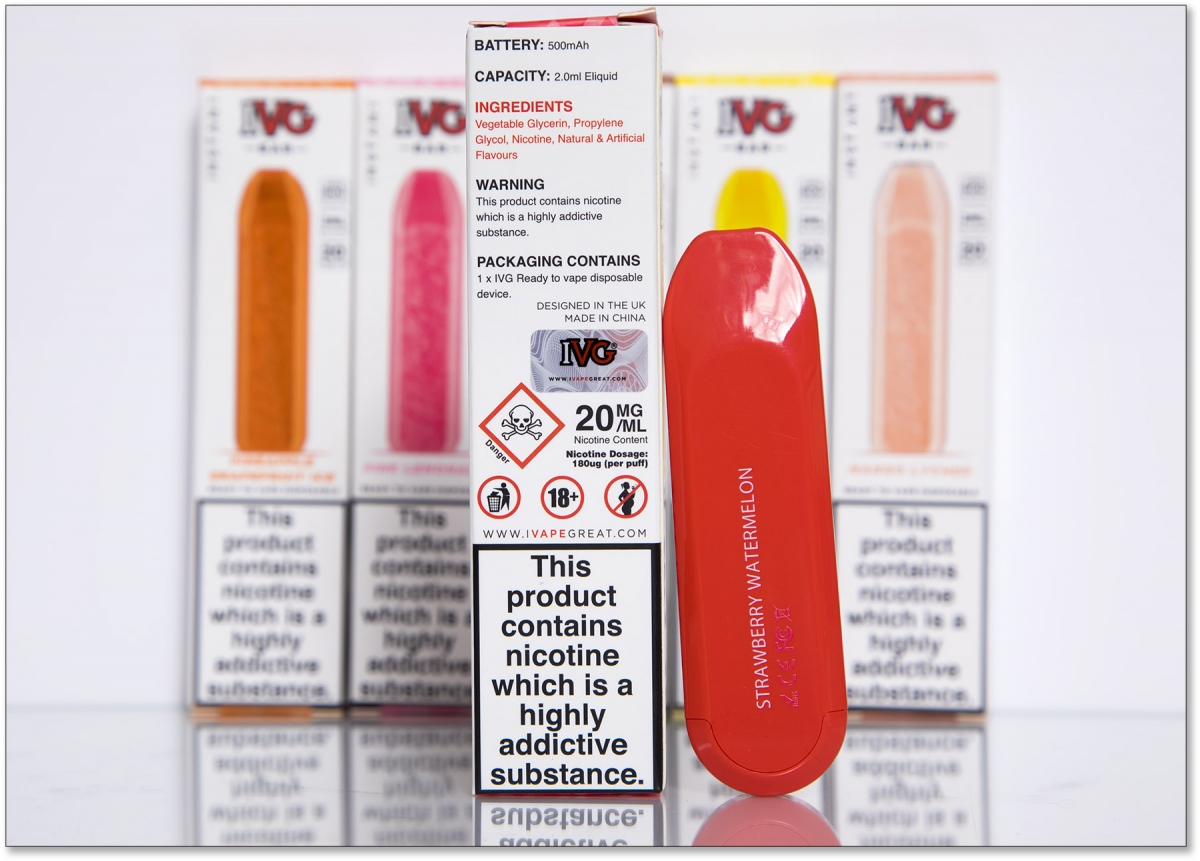 The IVG Bar is the maximum nicotine strength allowed (20mg) but they are ‘Nic Salt’ which is a really smooth way of giving you a nicotine fix and much faster delivery than traditional ‘freebase’ nicotine.

The IVG Bar comes in a colourful box with your chosen flavour clearly marked and the colour of the bar, inside the box you will find a fully sealed vape bar. 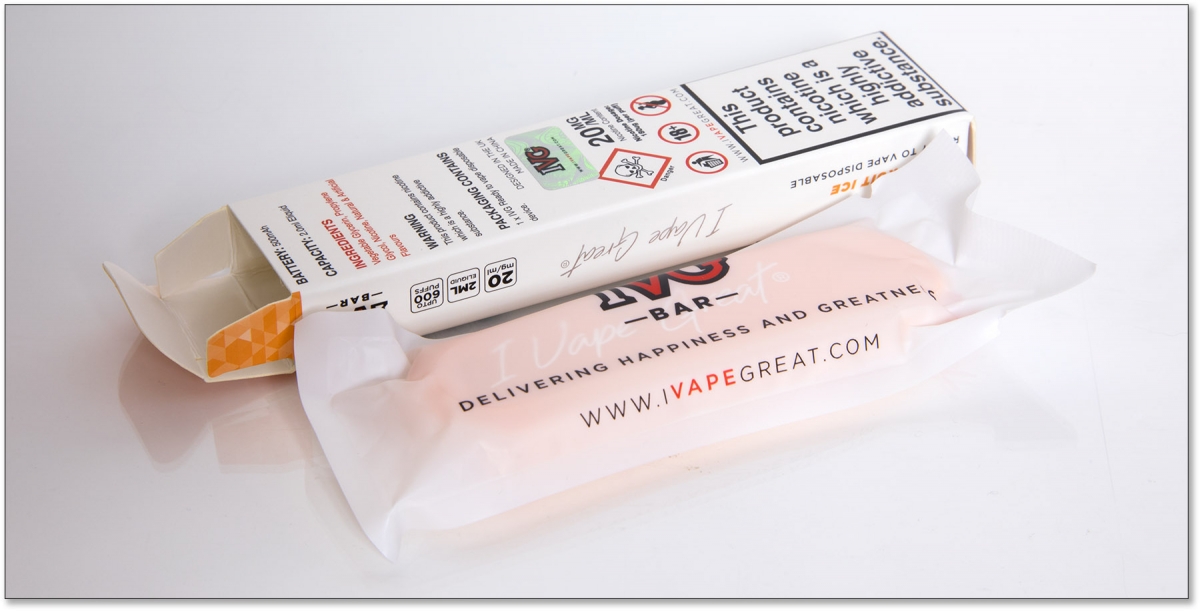 This keeps your vape fresh and is also very hygienic, the sealed bag has a notch so you can easily tear open the packet.

Once removed, there is also a little silicone bung in the mouthpiece which needs to be removed before you vape. You can dispose of this or keep it to replace if your pocket or bag has lint, I had no issues as the mouthpiece is nice and small.

I’ve possibly made it sound long winded but trust me, it takes a few seconds to open the packet and start vaping, there’s no button or controls as it has inbuilt ‘auto-draw’ which means you just vape it as you would a lit cigarette. As you inhale into your mouth, the vapour is instantly delivered, then you inhale as you would with a cigarette, hold it in your lungs for a couple of seconds then exhale. 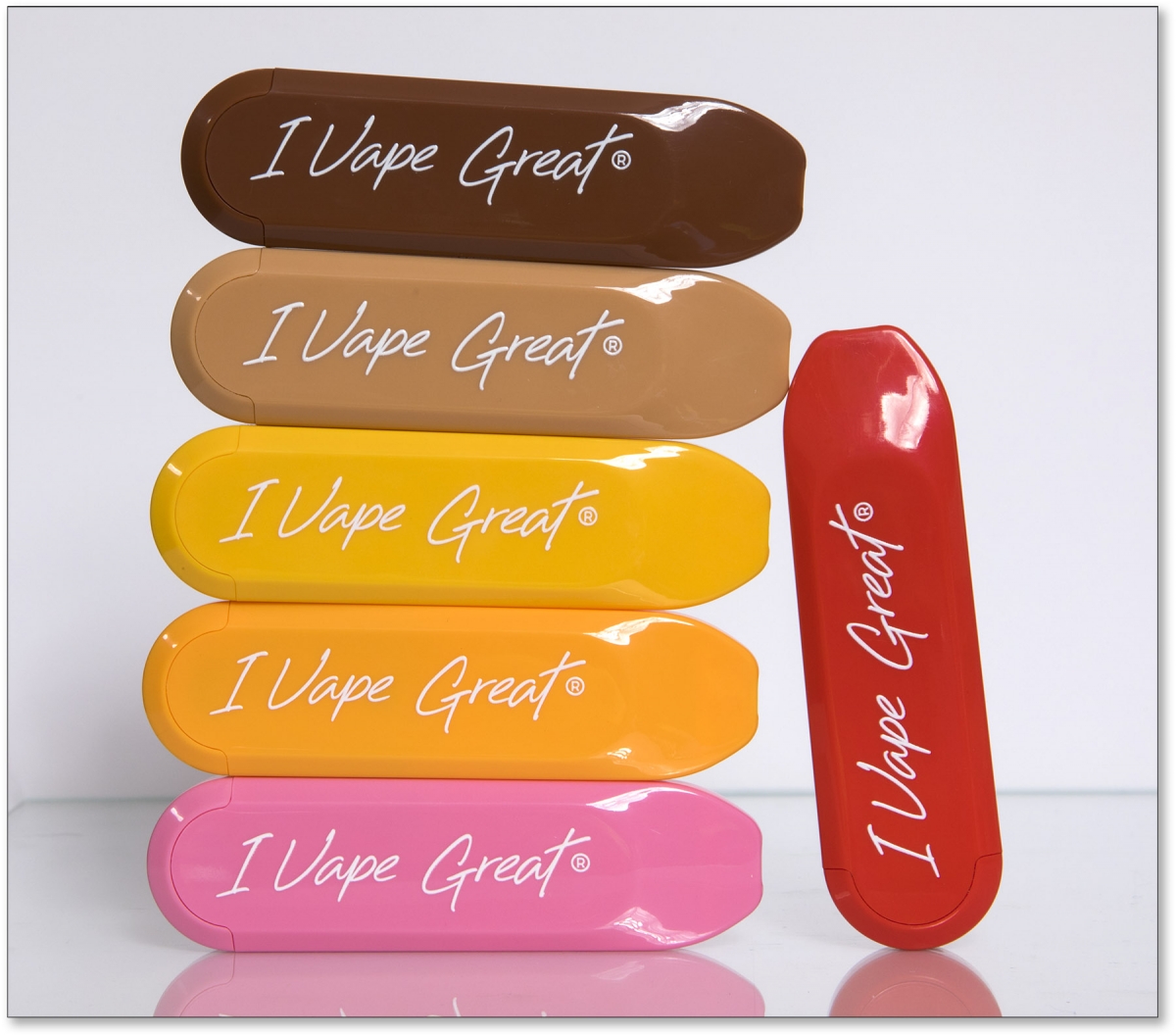 The overall quality of the device is excellent, almost too good to throw away! Each Vape Bar holds 2ml of e-liquid which is the maximum allowed in the UK and other TPD zones. The device has an inbuilt 500mAh battery which should last as long as the e-liquid, IVG claim “The IVG BAR will last you up to 600 puffs, that’s equal to 30 cigarettes!”, this is a little subjective as it depends on how long you draw from it per puff, but if you vape it like a regular cigarette then you should reach the 600 puffs mark.

You can tell if the device has run out, either by the power no longer coming through, or the other less likely way is when all the e-liquid has run out and you will notice a burnt taste. If this happens, then it’s time to dispose of the device.

There is a tiny LED on the base of the bar that should blink RED when the battery has run out, you cannot see it while vaping but if you quickly spin it round after drawing, you should be able to see it. It should be BLUE when it’s working.

Since there is no way of knowing how much is left, then be prepared that it might run out when you least expect it. My advice would be to have at least another one with you for when this happens, there’s nothing worse than running out and having to dash to the shops for a new one.

I will offer some advice on disposing of your disposable at the end of the review, but for now I will move onto the flavours and vape quality………

Rather than repeating myself I will cover the vape experience in general as all six bars performed pretty much the same. First there’s the flavour quality. Even on the flavours I wouldn’t normally choose, I found the flavour to be incredible. The warmth of the vape was mild and similar to a cigarette, perhaps a little cooler but that’s a good thing. The vapour production is similar to a cigarette too, don’t expect ‘massive clouds’ as this style of vaping isn’t about that, it’s more about the flavour and nicotine hit.

"Give yourself a taste of the tropics with fresh mango juices"

This has a real punchy Exotic Mango flavour, possibly the most accurate mango flavour I have tried, and the flavour absolutely burst through, especially on the inhale. The exhale has a slight coolness to it and leaves a refreshing aftertaste. It’s quite sweet but not overly.

I would happily buy this flavour again as it is just my cup of tea.

"Cool your taste buds with your favourite summer refreshment, twisted with a cooling menthol finish"

IVG have pretty much nailed this Cola Ice flavour, there’s no mistaking it on your first draw. It’s quite sweet but the ‘Ice’ on the exhale balances the sweetness out and leaves your mouth feeling like you have just had a swig of cola.

Though cola is not one of my personal favourites, I did thoroughly enjoy this one right down to the very last puff.

"A summer sensation you won’t want to put down, with the sweet taste of watermelon slices paired with handpicked strawberries fresh from the field"

Strawberry Watermelon was my favourite flavour and I was genuinely sad when it ran out. The description says it all perfectly and the aftertaste of the combined flavour is lush. It’s quite sweet, but then these two fruits are naturally.

Another success that I would definitely buy again.

I can’t say I have ever drunk pink lemonade so this flavour was all new to me. I was half expecting it to be sour but thankfully it had a really nice sweetness to it. If this is what Pink Lemonade tastes like, then I’m all in and I will look out for it in future.

Though the pink colour is not my thing, I would still add this to my shopping list.

This was similar to the Exotic Mango but the Lychee addition made this even nicer, especially on the exhale as the Lychee punches through. This flavour is pretty intense but not overpowering so. The sweetness is about right, and a little kick of ice makes it quite refreshing.

I’m torn between Mango Lychee and the Exotic Mango, but either one is a good choice.

I had to double check the label on this one, left to my own devices I would struggle to describe this flavour. Pineapple was clear, but I couldn’t quite detect grapefruit. That said, it still works as the pineapple wasn’t overpowering and the grapefruit made it smoother and very refreshing. This was the sweetest out of the ones I tried, but I still enjoyed it.

I think I would buy Pineapple Grapefruit Ice for variety, but I preferred the other flavours over this one.

I wasn’t expecting to enjoy these IVG Bars so much! The vape quality is superb and all six lasted well. I vape quite heavily but they lasted me a full day and I didn’t really notice the flavour dropping off before the battery died. I have tried a few disposable bars but these were easily the best. They were all quite sweet but that’s how I like my e-liquid. Reviewing these was far from a chore and I thoroughly enjoyed every puff.

One of the main downsides of disposables is just that, they are disposable and they aren’t biodegradable. As they are a fairly new trend, there isn’t really a good way to dispose of these when you’re finished with them. They shouldn’t go into your general waste as they contain LiPo batteries which need to be disposed of separately. For now I would advise either returning them to the vape store you bought them from as hopefully they will be the first to know of an official way, or keep them to one side and hand them into an assistant at your local recycling centre (just let them know they contain LiPo batteries).

Hopefully we will see the industry bring in their own methods of disposing of these bars, perhaps a deposit scheme or something like that. I’m purely speculating, but hopefully a solution will be found very soon as disposables are bad for the environment as they stand.

If you’re technically competent then the best way is to strip them down and separate the plastic from the battery. The ones I have stripped have rechargeable LiPo batteries which can be reused with a little electronics know-how, but be sure to check first though as some might not be rechargeable.

Feel free to pop onto the forum if you need more advice or have your own ideas.
https://www.planetofthevapes.co.uk/forums/