Today for review we have the Geekvape G18 Starter Pen which was kindly supplied to me by TECC.

Well, this is the new MTL pen style device from Geekvape, and it feels like a bit of a blast from the past as it’s not often you see this style of devices anymore. Geekvape have decided to bring the past to the present so let’s go Back to the Future and see if Doc Brown approves of this invention... 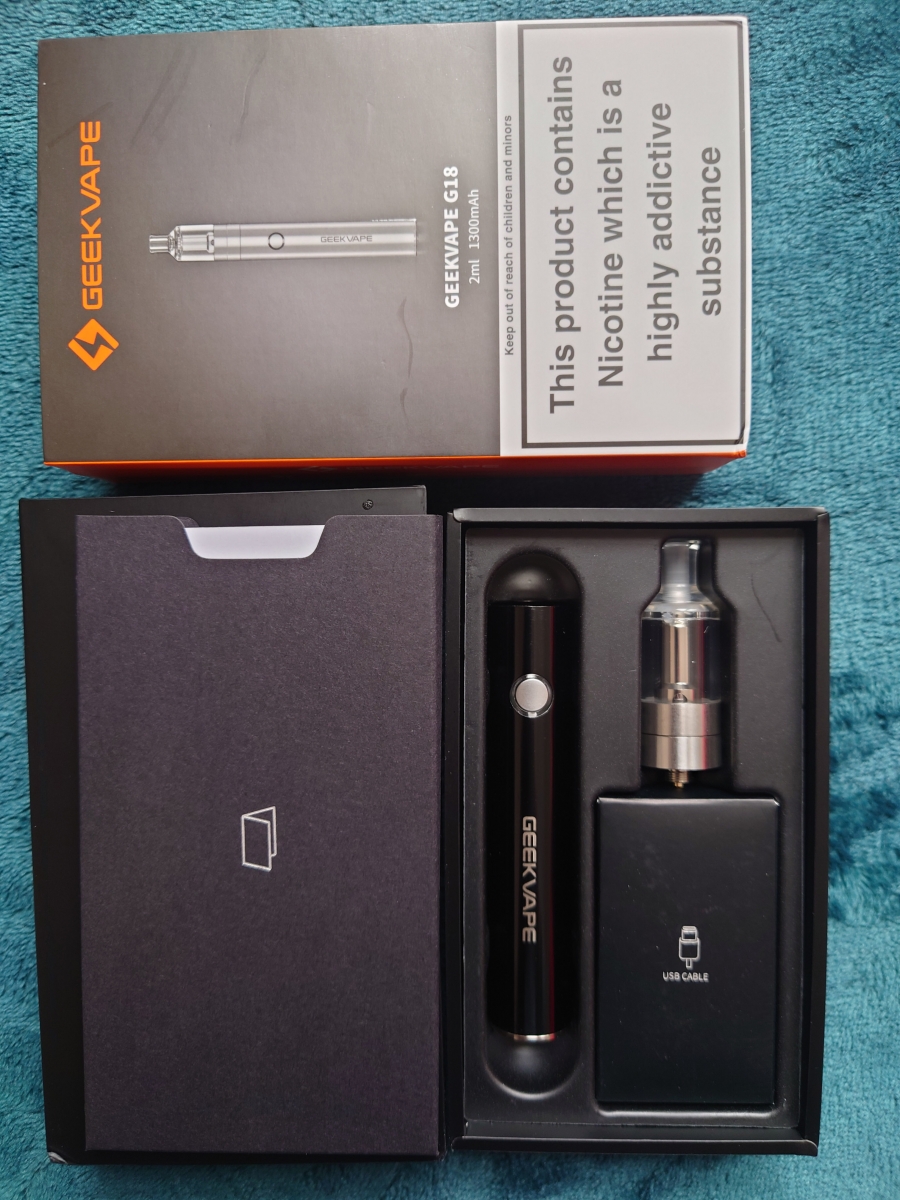 “Roads, we’re going we don’t need roads” – Doc Brown, Back to the Future

Not sure how the delivery driver got here then Doc, but if you say so.

It’s all neatly packaged in sturdy and smart cardboard packaging with an outer sleeve which you slide off. Open the box and contained within are:

The kit is available in eight colours in total – rainbow, wood, stainless steel, royal blue, malachite, aqua, scarlet, and the one I was sent, black.

For a full rundown of all the specs and protections you can visit HERE but the main ones are:

“Doc I’m from the future. I came here in a time machine that you invented. Now I need your help to get back to the year 1985” - Marty McFly, Back to the Future

I took the GeekVape G18 kit out of the box and was disappointed there was no flux capacitor, but I carried on and screwed on the tank to see how it looked and how it felt in the hand, and I must say I was quite taken with it from the outset. The black looks nice and sleek, and it feels good. It’s kind of cool to touch and there’s a nice weight to it which makes it feel sturdy but not heavy. There’s nice minimal branding with simply GEEKVAPE and the fire button on the body and that’s it, which is a nice change from the in-your-face branding we’ve seen on some other devices recently.

The fire button when pressed has a definitive click to it and the light ring which encompasses it tells you the information you need to know.

Five clicks turns the device on and five turns it off, whilst three clicks will adjust the power levels. The manual doesn’t actually state what the power levels are but click three times to adjust with the light flashing Green being the highest power, Blue the medium power and Red the lowest of the power settings. They don’t actually state what the wattage outputs are anywhere in the manual and as it’s bypass type, the power will naturally drop with the battery – Green 3.7V, Blue 3.4V and Red 3.1V.
It might sound more complicated than it is, but in practice it all works well and it’s easy for beginners to understand and to be able to change the power slightly without having to worry about setting the wattage too high or having a screen which can look overly complicated.

Charging is done via the USB-C port which is on the bottom of the device and thus not spoiling the aesthetics, and it makes sense as this device, if stood up, has a tendency to fall over. If you are going to stand it up, you’ll need a flat, even surface or it will fall over so most of the time it’s best just to lie it down, but make sure it doesn’t roll away!! The green light around the fire button will show as it charges, but it stays on constantly even when the battery is full so it’s a bit of a guessing game as to when it’s actually fully loaded. 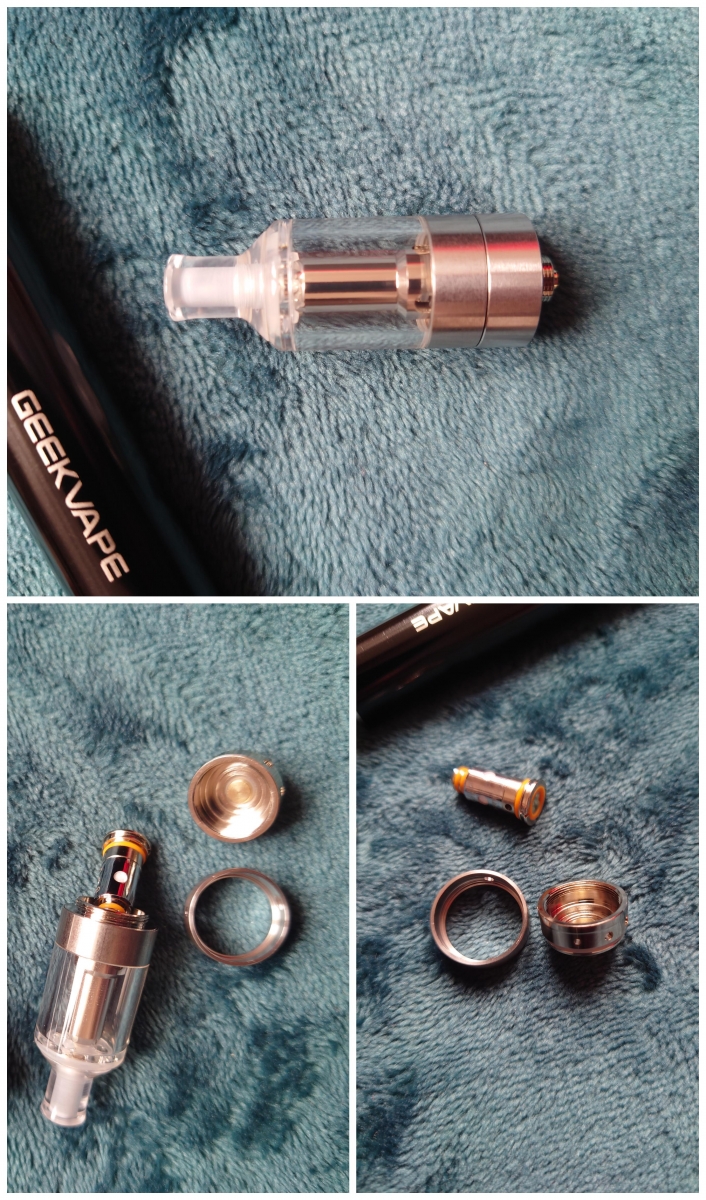 “If my calculations are correct, when this baby hits 88 miles per hour, you’re gonna see some serious shit” - Doc Brown, Back to the Future

The tank itself is clear, yes clear. No obstructions, no smoked plastic, just nice and clear and Geekvape are to be praised for this as you can actually see how much liquid you have left with ease. Just screwed it into the 510 connection at the top of the pen mod and it’s nicely threaded. When you have unscrewed the tank, you can unscrew the base to change the coil which is fitted with the simple push and pull method. The airflow ring can also be slid off when changing the coil, mine actually had a habit of just falling off but it’s easy to slide back on before screwing the bottom back on. The chimney in the tank means that even if you have quite a bit of liquid in the tank, you can turn it upside down and still change the coil without wasting your juice, which is a bonus.

The airflow ring turns to reveal three airflow holes – check manual for size. In all honesty, I could hardly tell the difference between the large and medium holes which both gave a very loose MTL draw. The smallest hole dials in the airflow somewhat and gives a smooth medium MTL draw. You can of course shut the airflow off completely and this will give you a really rather tight draw, so in terms of airflow there really is something to suit everyone here which not all kits manage to do. One thing to note with the airflow is that if you shut it off completely (which you will need to do to fill, I’ll come on to that later) and then try to open it up, it sometimes gets stuck and won’t turn. With your finger and thumb, just kind of lift the airflow ring a little and turn as this will free it up. 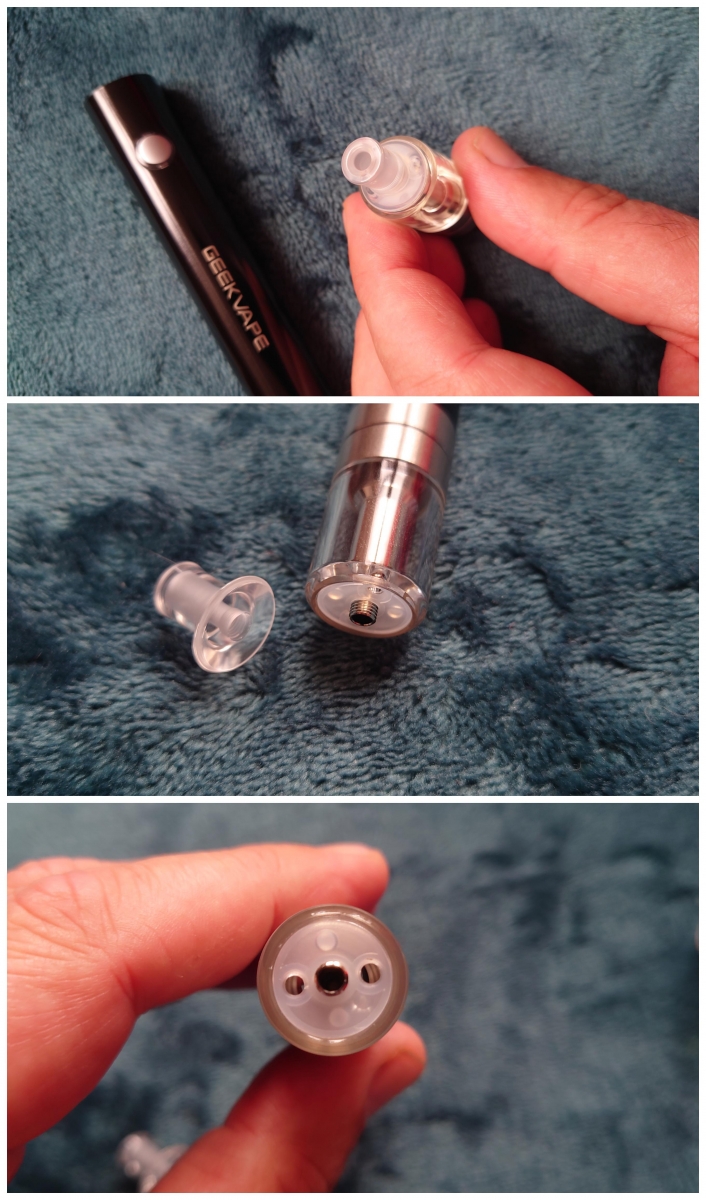 The coil is only rated to 12W Doc. Calm yourself, you’re getting overexcited again.

Filling the tank is relatively easy as you just unscrew the mouthpiece to reveal two fill port holes, but you’ll need to just take a bit of care. What I mean by that is that you must remember to shut off the airflow before unscrewing the get the top as if you don’t, then once you’ve filled the tank it WILL leak. Just get in the habit of shutting off the airflow before filling and you’ll be fine. Once unscrewed, the fill ports are there but they are quite small, anything larger than a small nozzled bottle and you might struggle to get the tip in to fill. Once filled, just screw the mouthpiece back on but do it with care. The mouthpiece is all plastic including the threading, but the threads on the tank are metal so I do wonder how long until the threading goes on the mouthpiece which would render the whole tank unusable. 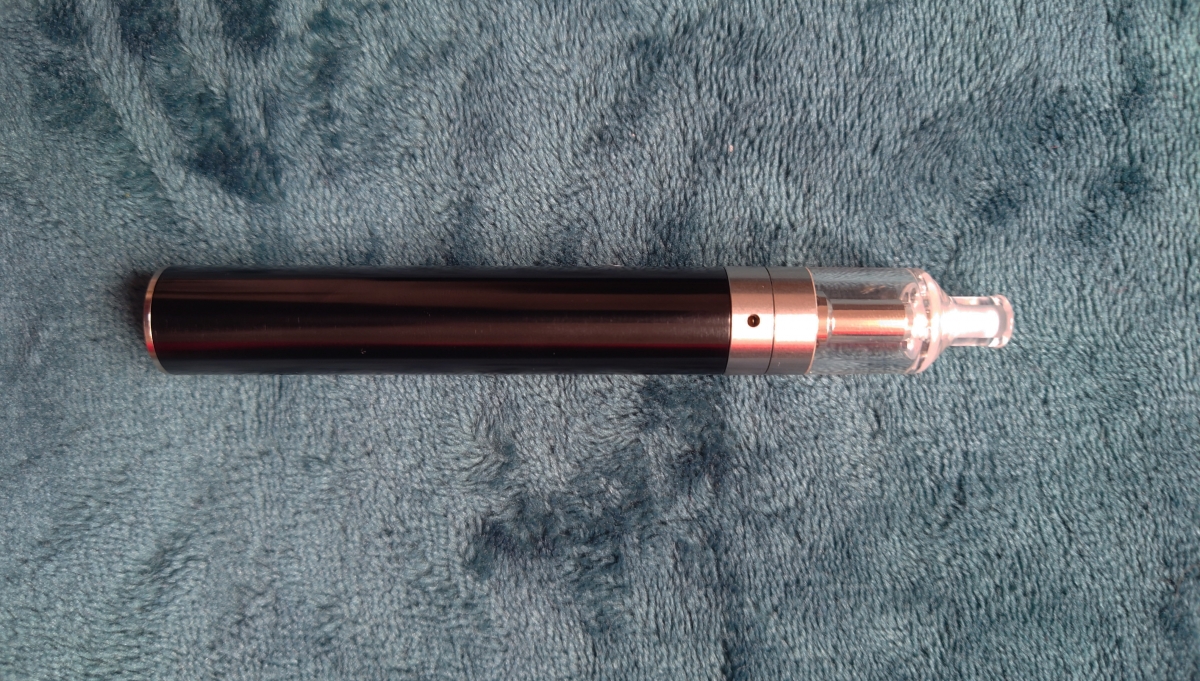 Did Doc Brown predict lockdown? That sounds like the start of the Back to the Future/Covid rap I’m writing.

As the 1.2ohm coil was preinstalled, it made sense to start there so I popped it out, primed it with Dinner Lady Lemon Tart, and off I went. I started on the lowest power and worked my way up adjusting the airflow at each power setting to find what worked for me. The flavour on the lowest setting wasn’t really there for me and was rather muted, but the medium and higher power settings really bring this coil to life. It took a little time to get going, but once the coil is bedded in then on those two settings, the flavour is really rather good. I actually found myself using the medium power setting the most with the smallest airflow hole about half covered, this gave me a cig style draw and a very flavourful vape. The battery lasted me just about all day and I found that charging it to full took about an hour and a half which is a little longer than I expected, but you can still vape while it charges.

Now to the 1.8ohm coil which I just swapped for the 1.2ohm coil so I could use the same liquid and give a direct comparison. The 1.8ohm coil is definitely a cooler vape and seemed to bring out the sweetness of the liquid a little more, but overall I didn’t find the flavour quite as good as the 1.2ohm coil. Even on the highest power setting, it seemed to lack the depth of flavour that the 1.2ohm coil gives, probably due to the lack of warmth. The flavour is still good, and the lower power meant that the battery lasted me all day. 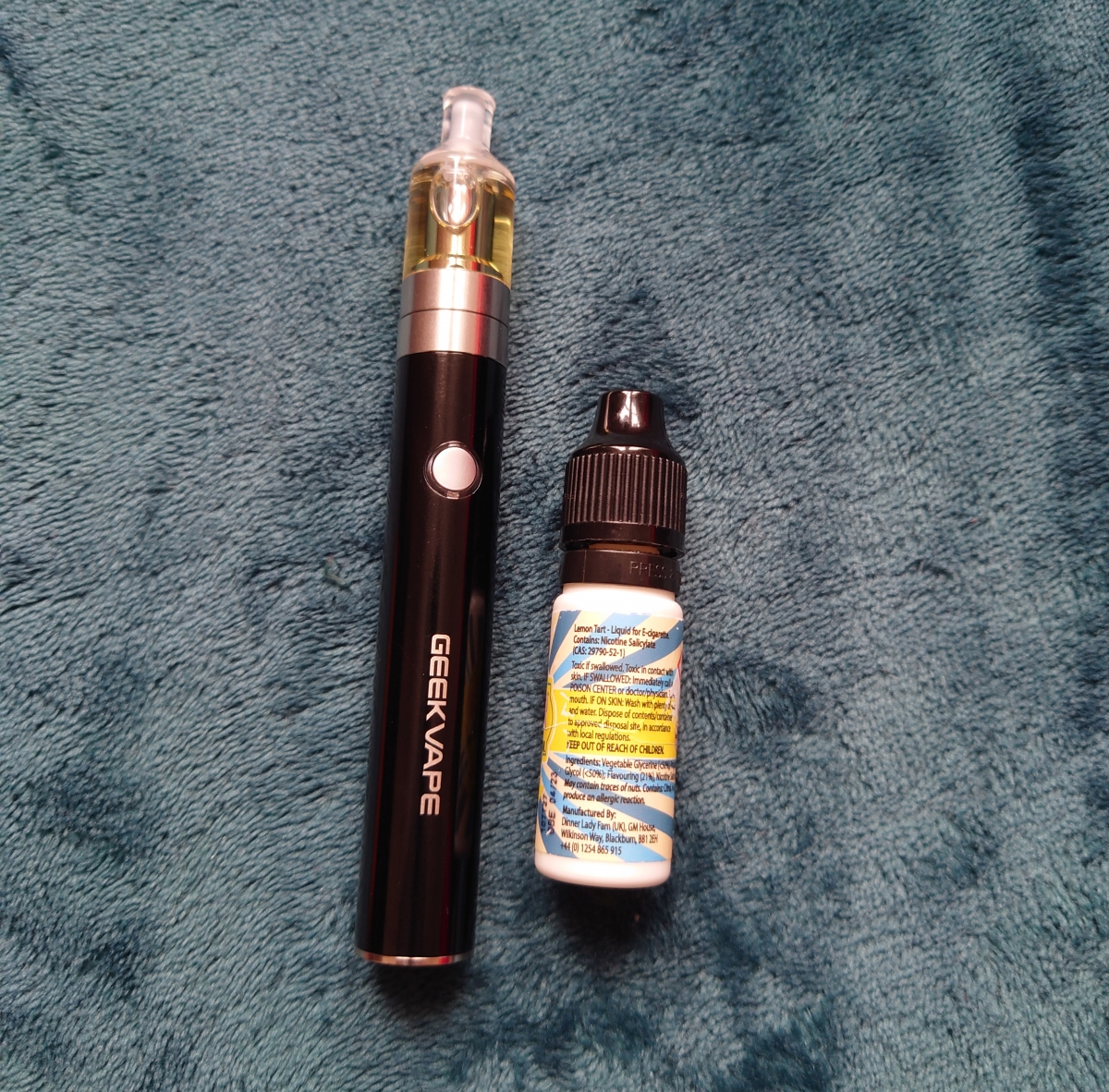 “Great Scott” – Doc Brown, Back to the Future

Which Scott? Scott of the Antarctic who invented penguins? Scott Bakula from Quantum Leap?

So, to the Geekvape G18 Pen Kit. The pen is mightier than the sword or so they say, but if that is the case then why are there many famous swords, Excalibur for example, but no tales of famous pens? There’s no tale about King Arthur pulling a ballpoint from the stone is there? In terms of this pen kit, I would say it’s a bit of a triumph. It’s slick, it’s well made, it’s easy to use but offers a degree of flexibility, and it’s easy to fill and change coils which are all essentials for new vapers. In addition to its style and ease of use, it also provides a very good vape with lots of flavour using the 1.2ohm coil, and has a decent battery life.

It’s not perfect though as I found it took a little too long to charge, and the flavour wasn’t quite as good from the 1.8ohm coil. The threading on the mouthpiece gives me concerns about how long it will last, and if you lose the drip tip you can’t use the tank. The airflow ring can get stuck, but it’s easy to free up and more of a minor inconvenience than a big issue.

Overall, I’ve been very impressed by the GeekVape G18, and as a starter kit for someone who wants to transition from smoking, I think this device would be a fantastic place to start, and even for more experienced vapers I found this to be a great kit and one I take with me when I’m out and about. 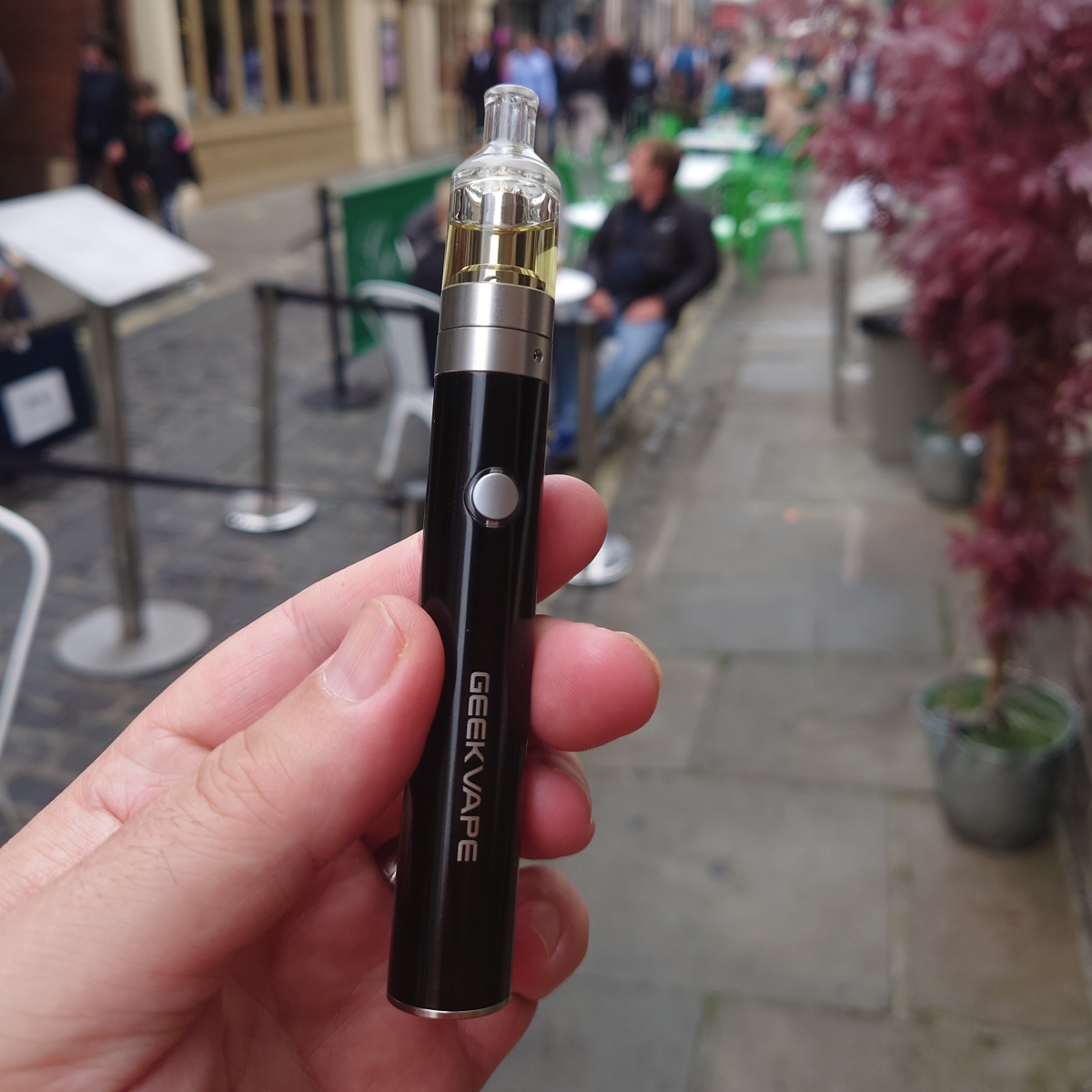