Dinner Lady asked us to take a look at their new vape pen series, a new take on the disposable pod kit prefilled with some of the most popular Dinner Lady flavours. Dinner Lady sent out a nice presentation box containing all nine flavours for me to test.

The new disposable vape pen comes packaged in exactly the same way as their existing prefilled pod device with an outer cardboard box inside which you’ll find a sealed foil package with your device inside. The vape pen also comes with silicone caps over each end to reduce the chances of leaking in transit and storage which need to be removed before use. The foil package and silicone seals means that the vape pen should always reach you in optimum condition.

The new Dinner Lady vape pen has a very minimalistic look, it’s a simple 106mm x 10mm aluminium tube, very reminiscent of an actual cigarette or an early “cigalike” style device, which should make it more familiar to current smokers. You can even hold it like a traditional cigarette should you wish. It’s very pocketable too, weighing just 16.7grams when full and dropping down to 15.3grams when empty.

Up top is the “drip tip” with a 4mm bore. There’s a Dinner Lady logo and a small arrow screen printed at this end to make it easier to identify which way is “up”. The vape pen uses a simple draw activated system and the airflow comes in from the four holes at the bottom of the pen and travels up through the device. This gives a medium restriction mouth to lung vape in use which I have found to be very satisfying in use as I prefer a looser MTL vape. I didn’t experience any rattle from the innards moving around like I did with the existing prefilled pod device this time either so build quality seems much better. One disadvantage of this slimline uniform tube design is that I have found myself picking this up from my desk several times and wondering why nothing was happening until I realised I had the wrong end of the stick (literally).

Each flavour comes in it’s own striking anodised colour finish, the one selected for the photos below is the “Bubblegum Ice” variety which is finished in a fetching blue colour. They all come with 1.5ml of Dinner Lady eliquid in either 30mg or 50mg nic salts which have been specifically formulated to give the best performance in this particular device along with its organic cotton coil. Having disassembled one of the units I can say that this is a small horizontal run coil with organic cotton running through fed from a foam reservoir (tank). There’s no word on the coil material used, but Dinner Lady were kind enough to let me know it’s nichrome (useful information if you have a nickel sensitivity).

It also boasts a 300mAh battery which should be good for around 400 puffs, in practice I found a few of the units seemed to give me considerably less than this so I pulled a new one from the pack and used a counter app on my phone to record the number of puffs…. it was about 260 in my case but this may differ depending on how long a draw you take. 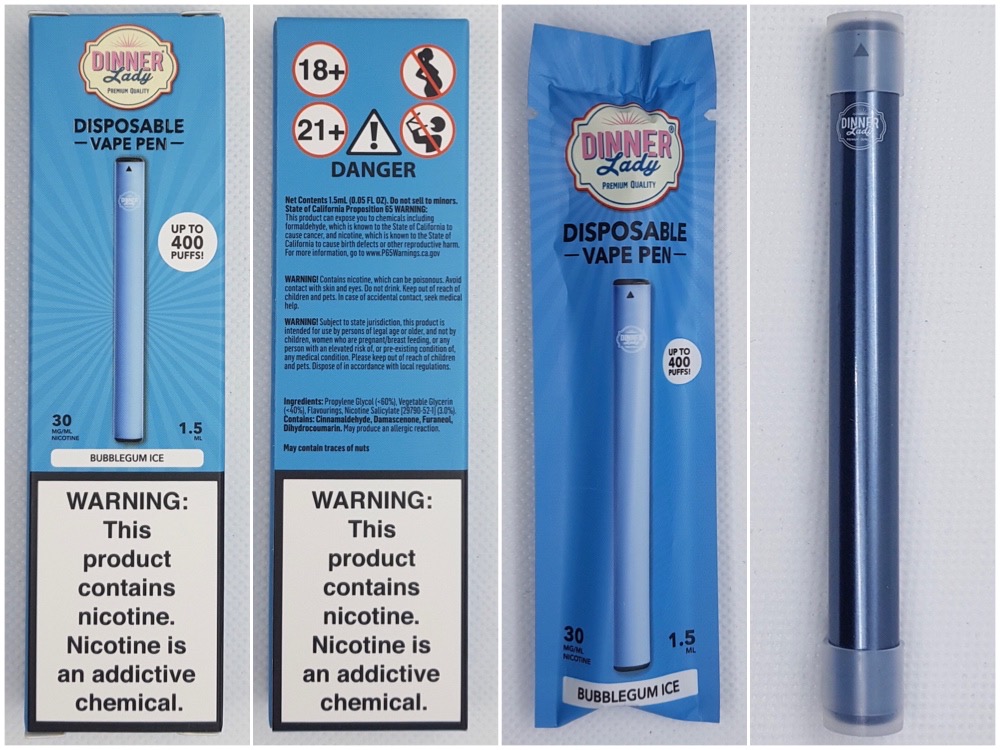 This is really fruity and tastes just like bubblegum with a slightly candified hit and a subtle koolada hit on the exhale. This is one I could vape all day and I was sorely disappointed when the battery died.

Exactly what it says on the box, a really fruity mango with a koolada hit on the end. After recently trying the Mango Ice version of Dinner Lady’s existing prefilled pod device, I can say that this feels much more punchy and flavourful, both the mango and koolada came through really clearly, the koolada punch on the end might be a bit much for some though.

I’ll be honest this was probably one of the flavours I was least looking forward to trying as I’m not overly keen on banana flavoured eliquids, however this is actually quite pleasant. Think of a chilled banana smoothie with that subtle koolada kick and you're there. It also kind of reminded me of those foam banana sweets I used to love as a child. Well done Dinner Lady, you’ve converted me to banana vapes!

Sweet strawberries are definitely coming through loud and clear, but Dinner Lady seems to have gone a bit overboard with the koolada on this one, there’s a real artic blast on the tail! Possibly one to avoid if you’re not a fan of menthol/koolada vapes and my least favourite of the range.

I was instantly taken back to my childhood with this one, it tastes exactly like a lemon sherbet boiled sweet! The lemon isn’t overpowering and the sherbert is spot on, the koolada component here is really subtle so this one may even appeal to you if you don’t normally like “ice” flavoured vapes.

A subtle lemon and lime flavour with just the tiniest hint of koolada. A really refreshing vape especially on a warm day (remember those!). Wonderful for cleansing your palate as well when testing multiple flavours.

If you’re wondering what “Mac” is (I certainly did) it’s macaroon… a delicious subtle strawberry layered with cream and a cake and coconut base. A lovely bakery style vape, although the strawberry could perhaps do with a bit more of a push as it’s slightly overpowered by the bakery component. This has apparently been done because the international markets that this device is aimed at prefer a strong “ice” hit to their vapes.

I’m picking up cherries mixed with sweet red berries but I could be mistaken as I’m not generally an eliquid reviewer and I often find it difficult to pull out individual flavour components, especially in fruity vapes. Even so, this is a fabulous fruity fusion with a sweet kick which isn’t too sickly.

I saved what I hoped would be best for last, I’ve been partial to Dinner Lady’s signature lemon tart elquid in the past and this doesn’t disappoint, a delicious lemon meringue with a biscuit base. I haven’t had this in a while and this tastes exactly like I remember and is easily one of my favourites. 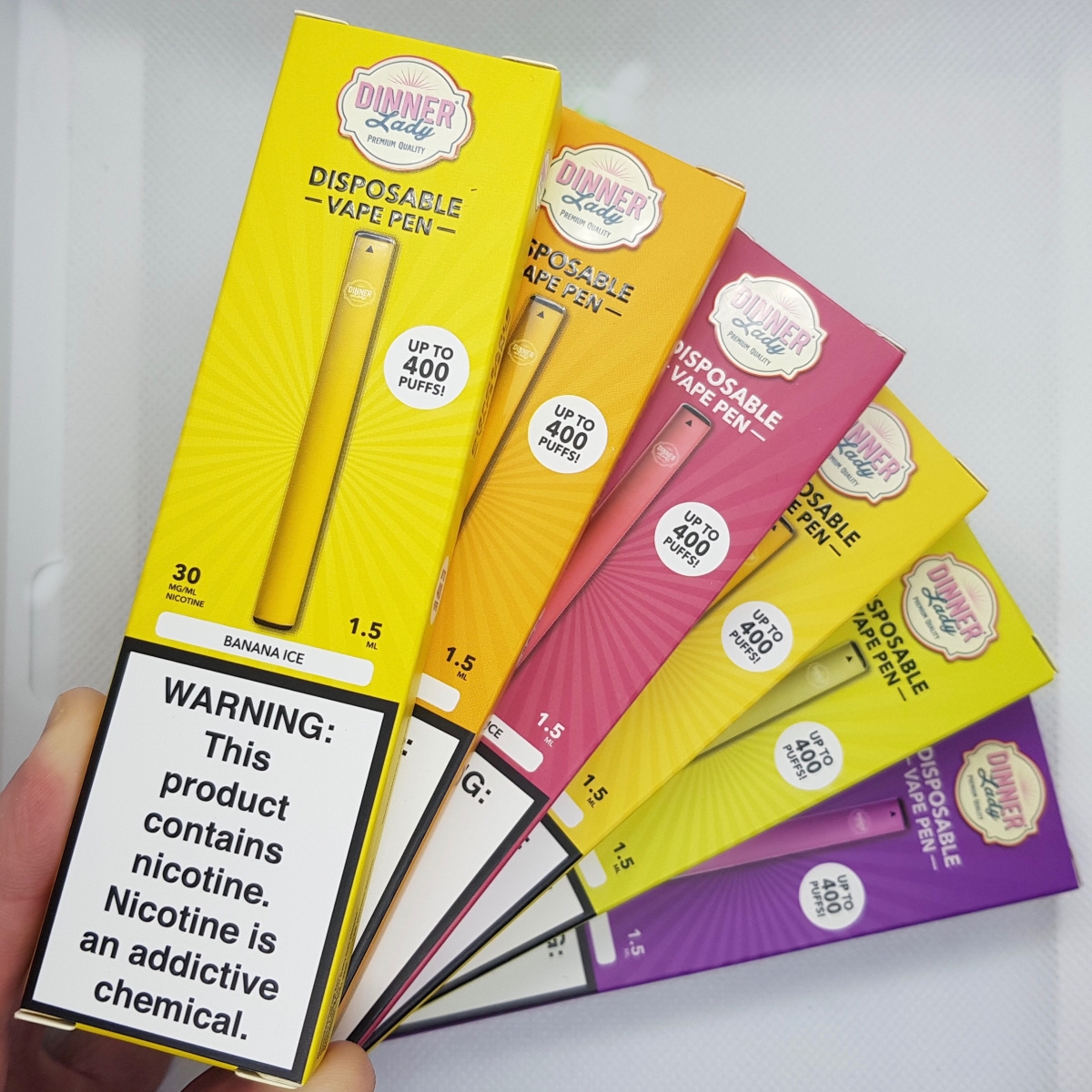 Dinner Lady are onto a winner with most of these flavours. They’ve done an absolutely top notch job of getting so much flavour out of such a small device. Going off the Mango Ice flavour, which I recently tried in their current prefilled pod device, the new vape pen was simply streets ahead in performance.

I had a couple of units where the battery life seemed a little disappointing, the Banana Ice one in particular didn’t seem to last as long as the others, and they all seemed to run out of power before they ran out of liquid as I didn’t experience any dry or burnt hits, but this could be down to these being from an early pre production run.

Unfortunately as these only seem to be offered in 30 and 50mg nic salts, these are obviously intended for overseas markets as they’re not exactly TPD compliant. They also have a “max” version of these in the works with a 6.5ml tank and a battery good for 1500puffs… now that is something I’d like to see, TPD be damned! Hopefully we’ll see a 20mg variant being released further down the line, fingers and toes crossed. 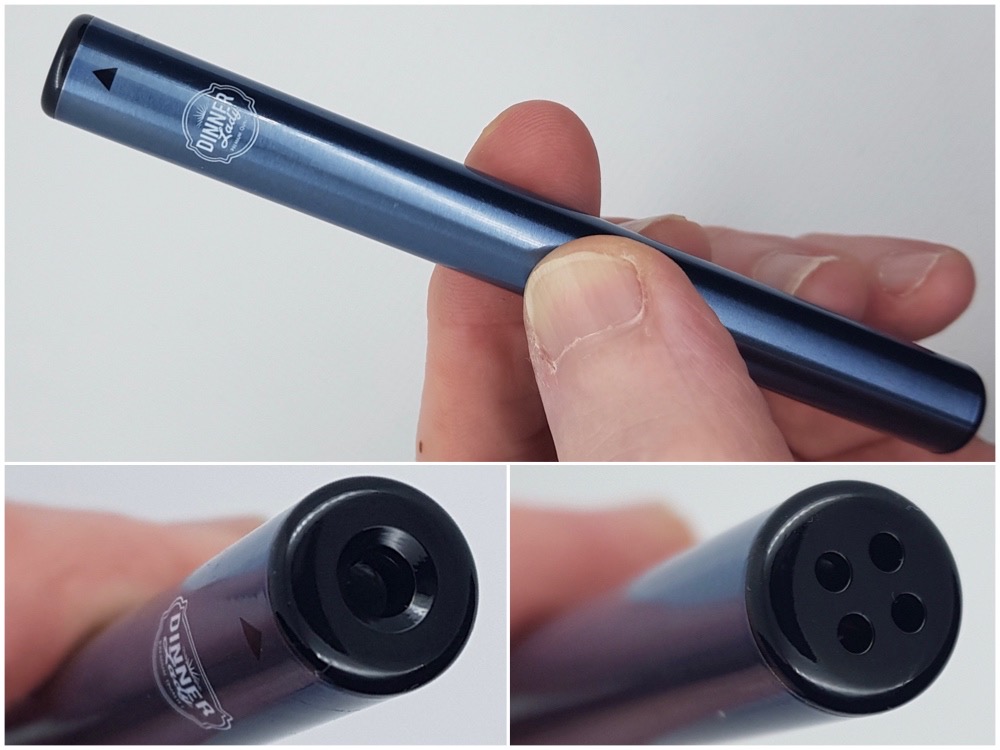