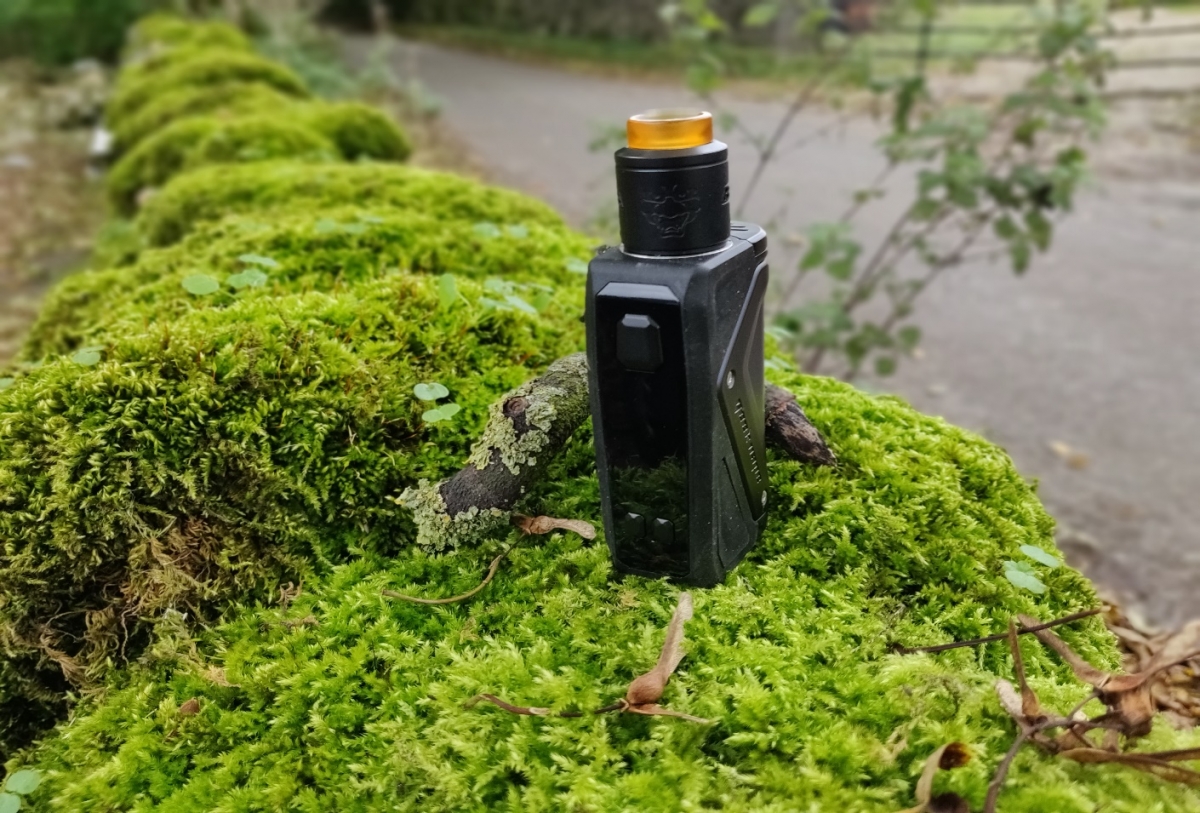 Thanks to Heaven Gifts for sending out the Aegis 100W Squonk Kit for review.

The latest offering from Geekvape is the Aegis 100W squonk kit that promises a squonking & regular mod in one package. Will it be a better success than previous attempts at a 2 in 1 solution?

To start with, I was sent a review version of this mod that included the non squonk back plate. The back plate isn’t included as standard and has to be purchased separately. For those looking, it is confusingly called “Replacement Skeleton” and is available in the same colours as the squonk version giving you the option to mix & match. The current price is approximately £10. Also there are two versions of the kit, standard & 2ml TPD compliant. It appears the TPD version is minus the squonk bottle. This is available in black, silver, green, red, blue & chameleon trim on a black body.

This is all well packaged in usual Geekvape style in an orange bottom box and with a black cover and understated branding. Now this was a sample/review package because other Geekvape products I’ve used have more prominent branding. 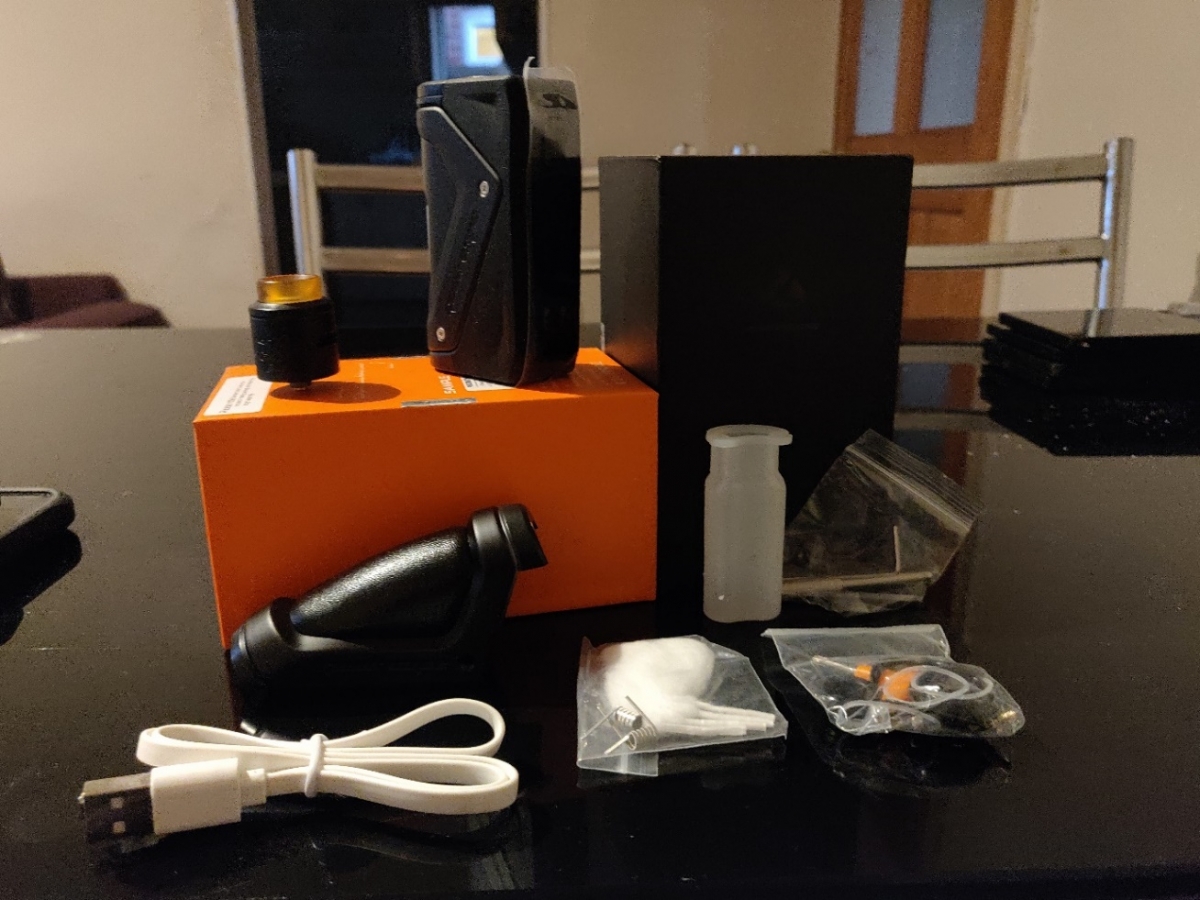 The RDA included is the Tengu dual coil with bottom feed pin fitted, more on this later. It's nice to see an extra squonk bottle provided as these are proprietary and at the time of writing I was unable to find spare bottles.

As with other mods in the Aegis series, this boasts of being dustproof, waterproof (IP67) and shockproof, and certainly feels rugged without being overweight. The surface has a partly non-slip finish in matt black. The USB port is hidden behind a large flap providing very good water & dust proof protection. There is a decent sized window for squonking. A large 510 connector allows 28mm atties to be used with no overhang. A 0.96 OLED screen gives clear information coming from the upgraded AS100 chip with power, TC/Ni,SS & Ti, TC/TCR, VPC (power curve) & bypass modes, with a max power output of 100W. Five clicks of the fire button powers on/off & three clicks puts you into the menu system. Navigation is via the left and right power buttons. All the buttons have a nice click to them with no rattle, likely due to the dust/waterproofing used. The battery compartment is accessed via a screw cap, it takes 18650 only and I'm happy to report there is no rattling. This squonk adopts a top fill approach, accessed via a sliding cover on the top of the mod. As with every top fill system I have used, the fill port isn’t easy to access especially if the attie is in situ and it can get messy with the larger spouts on shortfill bottles. The supplied RDA is easy to build on, very smooth honeycomb airflow and fully adjustable.

I popped a set of coils at around 0.25oHm on the Tengu and wicked with CB Prime, with the ends resting in the juice well without filling it. Next I filled up and this is where the smallish fill port showed its limitation with spout sizes. The port also has flaps to help prevent leaking but this also makes it hard for the displaced air to escape. Having had this issue before, I tend to squeeze the squonk bottle to create a partial vacuum which helps draw juice in. Once almost full, I fitted the RDA and gave a couple of squeezes to fill the juice well, replaced the top cap and away I went. In power mode, delivery was smooth and quick. I gave bypass a go and was quite happy with the results, pretty close to mech use without the power drop off. Having run this setup for a few days and about 50ml of juice, I swapped over to a TC set up that I use often. Simple SS316L round wire build around 0.3oHm on the TC/SS profile and again it performed well. Not DNA/Yihi level good, but as good as any other chipset that can do TC well. After using this as a squonker for a couple of weeks, it was time to swap into regulated mod mode.

The squonk section is secured by four Allen screws and a Hex key is included to remove them. Now maybe it was because this was a review kit but the screws had different sized heads, so good job I had a few hex keys to hand. Once the screws are removed it’s just a case of popping off the squonk section and replacing with the normal back, using two screws (not four) and it’s now a regulated mod.

I popped on a Flow Pro subtank with mesh coils and the mod performed perfectly well. Being single cell, I would normally go with a higher oHm set up but I didn’t have one to hand and the battery life at higher watts was obviously reduced. This is normal for most single cell kits. At 40-50W battery life was as expected.

All in all this is a well-rounded package. A solid, dependable mod with good heritage but still a bit of a make piece attempt at a 2 in 1 solution. Whereas this is a far better attempt at this style than the Asura, there are still certain annoyances that include ease of swapping and proprietary bottles. The Asura had the squonk section as a magnetic clip on but was prone to leaking. The Aegis squonk is, to date, leak free, but not an easy swap. Although the Aegis comes with a spare bottle, swapping is a part dismantle of the holder to remove and replace. The Aegis is a better built mod all round but I would likely only purchase as a squonk set up as opposed to buying the extra back to convert. Maybe it’s because I have dedicated mods for either mode that I personally find these 2 in 1 set ups more hassle.

With regards to the included Tengu RDA, I admit I was pleasantly surprised how decent it was and it definitely would have slipped under the radar even though it is available separately. If you fancy something different, I would recommend you take a look at this RDA.