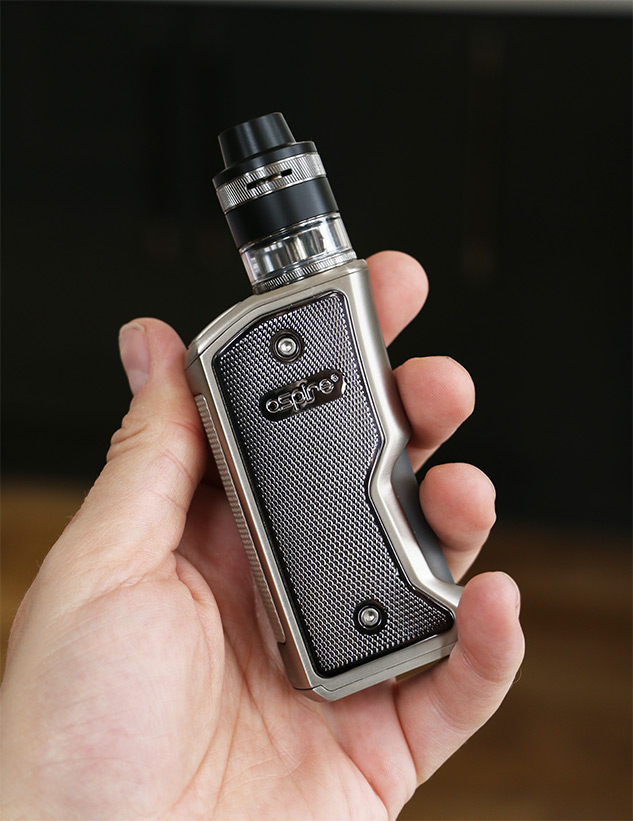 The Aspire squonk kit has finally landed!  Following some pictures being posted on social media channels at the beginning of the year, the Aspire squonker has been released today.  The Feedlink mod is paired with the Revvo Boost tank in the kit.  Let’s see if Aspire have brought anything new to the squonk market…

The Feedlink mod is a single 18650 powered device that is semi-regulated.  It has no variable power capabilities but, unlike a straight mechanical mod, it does offer a level of user protection.  The Revvo Boost tank is a variant of the original Revvo, but rather than being able to fill using the novel top up system, this tank is designed be used for squonking. 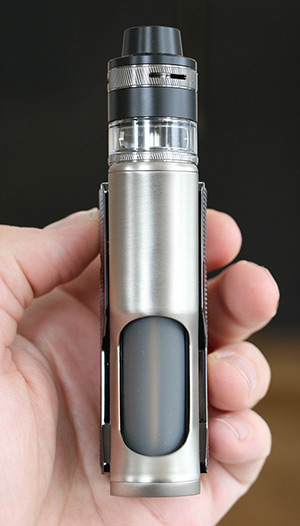 The Feedlink is a nicely designed mod in my opinion, POTV received a couple of them for this review, one in silver highlights and one in blue.  The silver version has a silver frame and silver / dark grey engraved side panels while the blue version has a black frame.

The frame is constructed from zinc alloy, it feels strong and has a really good weight to it.  The mod is well designed, it fits really nicely in the hand and the pistol-grip style with a top housed firing button is very comfortable and the position of the firing button feels natural. 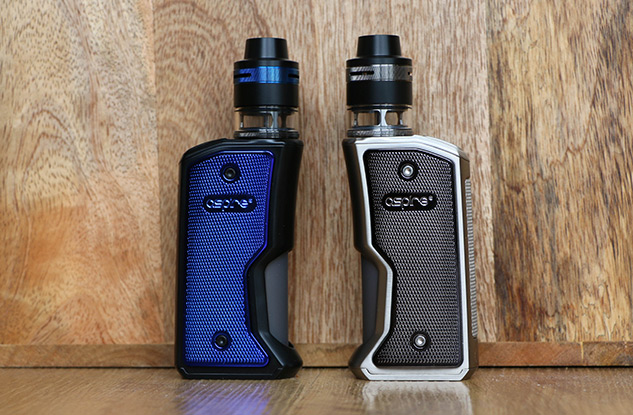 The diamond pattern engraving on the side panels helps to secure the mod in the hand and gives the mod a stylish, elegant look.  The same diamond pattern is engraved on the button and the back panel while the front of the mod is smooth and shiny.

As well as the alloy panels there are also resin panel versions available.  Personally, I like the look of the metal panels more and the extra grip these give would put this version on my shopping list.

There is a really nice click to the button, it is responsive and is a good size - the position and the engraving on the button make it a pleasure to use.

At 7ml the bottle is a really good size.  It uses a plastic housing to hold the bottle and a quarter turn or so releases this housing from the mod.  You can then slide out the silicon bottle.  The bottle has a screw on top with a nice knurled edge to make it easy to get off and this top also has a metal tube that runs down to the bottom of the bottle.  The silicon bottle has a metal inner that the bottle top screws into, so you can grab this when unscrewing the top and screwing it back on, so you won’t get any leaking when refilling.  Likewise, the plastic bottle housing means that you won’t put any pressure on the silicon bottle when reinserting it, so juice loss and mess is minimised in day-to-day use. 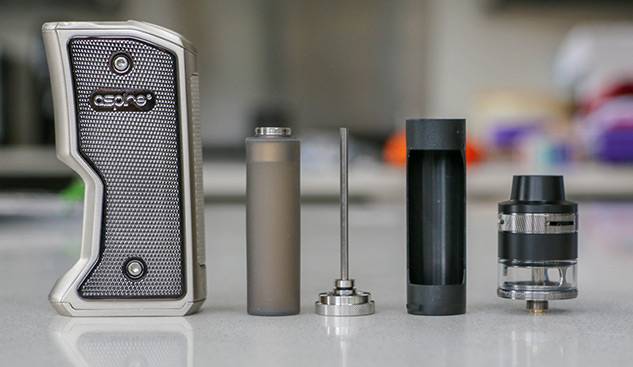 The mod looks and feels great, sturdy and easy to use and a good weight.  There are a lot of boxy looking squonkers available so it’s nice to see something that has clearly had some time spent on it. The refilling system has clearly had some though put into it as well and, while the plastic housing is yet another part to the mod, it really does make refilling mess and accidental squeeze free, so it is a worthy addition.  Good job, Aspire!

The Revvo Boost is essentially the same as the original Revvo tank that was released late last year.  It is a 24mm tank that uses the ARC (Aspire Radial Coil) system.  Rather than the conventional wire coli this system uses a circular disk with a cotton pad underneath it.  The juice is held in a reservoir beneath the coil and the suggestion is that you tip the tank up every few puffs just to make sure that the cotton is saturated.  The original Revvo has a unique filling system, you can fill the tank without having to unscrew anything via a filling nozzle above the coil – the Revvo Boost has a hole in the central pin just below the cotton pad.  When you squeeze the bottle juice is pushed up through the centre pin.  I found that the juice was sucked up nicely by the cotton during the first few squeezes but turned it upside down a few times just to make sure.  I must admit that during use I haven’t upended the mod at all and it has worked flawlessly with no dry hits.

The silver sided mod comes with a silver air flow control ring on the Revvo and the blue sided one came with a matching blue airflow control ring – nice attention to detail and pairs the mod and atty up nicely.  The tank has a Pyrex sleeve on it, allowing you to see your juice level - and there is a replacement set in the kit just in case you break it. 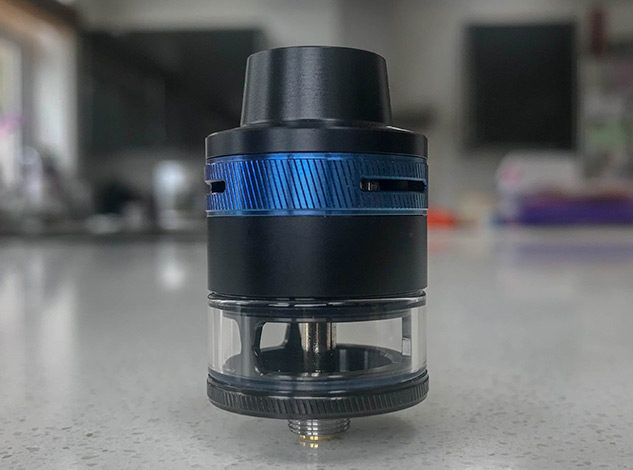 I have seen a lot of good feedback about the Revvo and the ARC system on the POTV forum, and it is a cracking vape!  At 0.1-0.14ohm the vape can be pretty full on with the airflow wide open.  Closing the air flow down does give you a less full on vape but it does push the temperature up a bit.

With the original Revvo I also had some issues with it popping.  If I left the mod alone for an hour or so and then came back and fired it, more often than not it would give off a hell of a pop.  I have had this happen with other tanks before, and it can give you a bit of a shock, especially if the drip tip is in your mouth at the time!  One way to get around this is to get into the habit of firing it before you put it near your face, or to dial the power down a bit.  I have had the same popping a few times now with the boost as well so if you do get this system then do be aware of this.

Even with the higher power of these coils, the large Delrin drip tip means that the mouthpiece doesn’t get too hot, even if you do close the airflow down a bit.

My only negative feedback here is the ARC system and it being aimed only at those who want bigger clouds.  Some higher resistance coils would be really welcomed if you are listening Aspire!  A completely different tank aimed at a tighter airflow and a higher resistance would be a good addition to this arrangement too.

The Feedlink is a semi-regulated device – it has no power control functions at all, the power is derived from the resistance of the coil and the charge in your battery.  Some mods over the years have had a function called bypass mode and this is essentially the same.  What you have in terms of coil and battery is what you get out.  This is pretty much the same as a full mechanical mod but with a few safety features thrown in too like reverse battery, short circuit, overheat and over discharge protection as well as a 10 second firing time cut off.

With a fresh battery and all the way down to the orange and blue light showing (indicating a charge between 3.5 and 3.8V) the vape was consistent.  As you get below 3.5V you can definitely feel the power drop off a bit as well as the indication from the LED showing orange and blue from 3.8V down.

The mod has a gold plated 510 connection with a rubber o-ring a millimetre or so off from the connection.  Using the Feedlink with both the Revvo and a Haku Cruiser and the Flave 24 exclusively for the last couple of days I am pleased to say that all tanks had dry bottoms after use.  I haven’t taken the mod out and about but I am confident you won’t get wet patches in your pockets from using this mod.  How long the o-rings will last I can’t say but there is a bag of 11 spares in the kit so the set up should last you a really good amount of time. 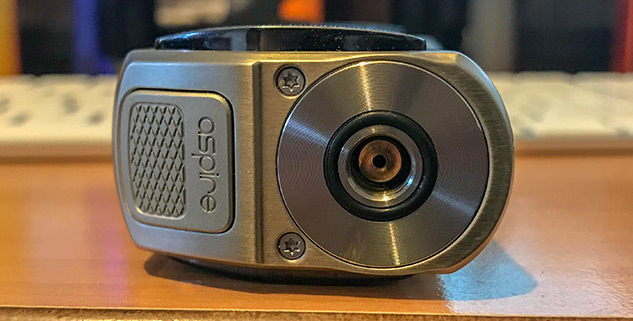 Squonking worked nicely right down to the bottom of the bottle and survived my attempts to over fill the tank so from this point of view the mod worked very well too.

Overall the mod and tank have performed flawlessly in the two days that I have been using it for.   It is a thirsty set up though but with the cost of shortfills falling off rapidly it is not a bad time to have a go at pushing out some dense clouds!

Using the Feedlink with RDAs

The Feedlink mod is also fine in use with a normal bottom fed RDA.  I recently picked up a second hand AllianceTech Vapor Flave 24 as I really liked the 22mm version that I have had for a few months now.  These are great atties, easy to build and they produce superb flavour.  I used some Coilology Tri-Core fused Ni80 Clapton wire – the 3-28/36 version.  Five coils gave me a 0.36ohm coil and this set up is a cracking vape. 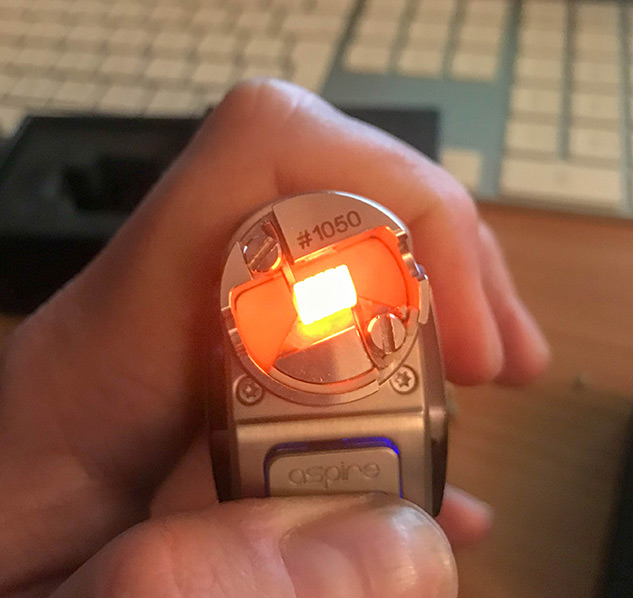 Squonking in its usual form works nicely with this mod, a quick squeeze of the bottle fills the deck via the bottom feed pin and the sucks any excess juice back into the bottle.  The bottle is a nice silicon one, not too hard and not too soft!  Due to the bottle holder and the metal feeding tube it isn’t going to be easily interchangeable with any open source bottle systems and we are yet to see what pricing will be like for the mod or kit but hopefully the bottles won’t be too pricey. 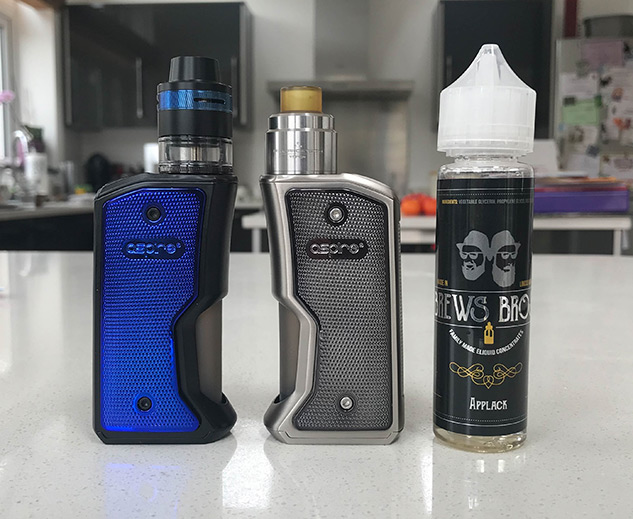 Using the mod with an RDA and higher resistance coil means you will get a longer life out of the battery as well as being able to control the amount of vapour you are getting from the mod by changing the resistance of the coil.

I love the look of this mod – its weight and feel in the hand are spot on and the styling is elegant and classy, nothing gaudy or in your face about this set up!  Coupled with the Revvo Boost it is only 15mm or so taller than using it with a traditional RDA and it fits in the pocket nicely.

I like the simplicity of semi-regulated devices, from using the Limelight Gloom with a simple mosfet and more recently a SunBox LV-426 with a Bomber Pro mosfet, there is a level of protection – being able to lock the device is a big plus for me – and it gives a consistent vape even when the battery is getting low.

All in all this is a pretty wicked set up and definitely one that I am happy to carry on using and to recommend to any interested apes!  many thanks to the team at Aspire for sending these in to us to try - we are giving one of these units away in a competition here, competition closes at a quarter to midnight on the 18th so we can get this to the winner by the weekend!  More information is now available direct on Aspire's website here http://www.aspirecig.com/aspire-kits/aspire-kits504.html. 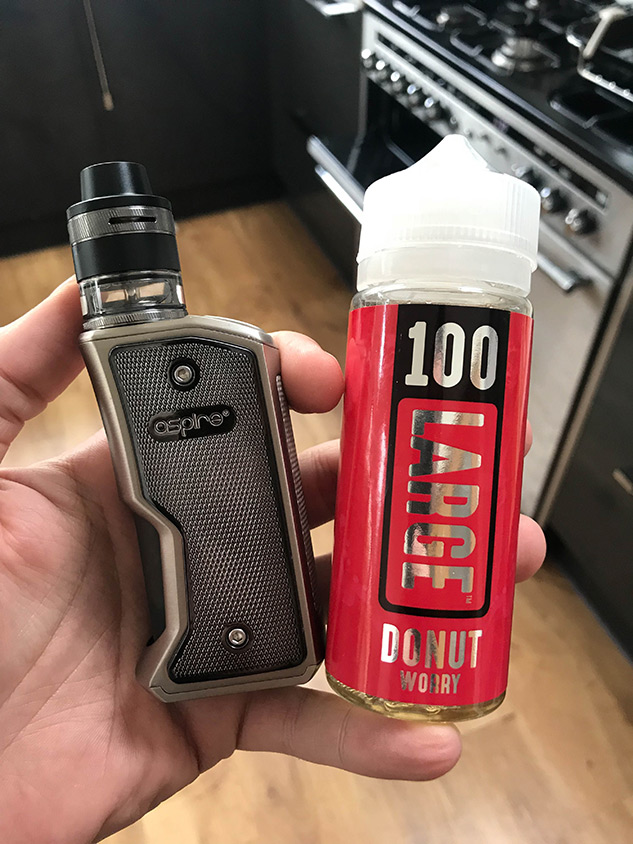