Many thanks to Wotofo @WotofoOfficial for supplying the new Profile RDA 1.5 for review.

Have Wotofo & Mr Justright1 released a rebadged Profile with cosmetic changes, or is the 1.5 an improvement on what was a game changer last year with its clever implementation of mesh strips in an RDA? This version uses the same design, but the tweaks made are far more than skin deep. First thing you’ll notice is the revised airflow holes, two rows of five holes compared to the three rows on the original. The airflow isn’t quite as smooth but it does allow for more variation. With airflow fully open you can turn the top cap anti clockwise to shut both rows off gradually, while turning clockwise the top row can be closed down completely. The barrel now has thinner walls helping heat dissipation and this also allows for the biggest change to the deck. The deck is still 24mm but now has more area to accommodate the revised larger ceramic support and allows more juice in the well. The mesh clamps are bigger to take the new mesh strips and an improved spring under the block, as well as the ridges, ensures cotton gets thoroughly soaked when squonking. This was one of the main areas of complaint about the original as it sucked juice back out after squonking. Two 810 drip tips are supplied, one the same as the original and one low profile. The new mesh comes in three variants, all Ka1. The Chill mesh is closest to the mesh supplied with the OG Profile. The Turbo mesh is a lower resistance sheet & the Extreme mesh is a wire mesh. The new mesh is 1.4 times the area of the original, wider & longer, which does mean they are not compatible with the old Profile.

As usual with Wotofo, this is well packaged in the usual black and green theme with a clear plastic top displaying the RDA. Inside is the now standard sealed spares bag, with spare 510 solid pin, 'O' rings and screws. Annoyingly, the second drip tip is also in the packet which means once opened there’s a chance of loosing the pin or screws. Each nexMESH strip is individually bagged and clearly labelled, and the included cotton laces are the Xfibre version. There’s also a fold out manual for those that read them. 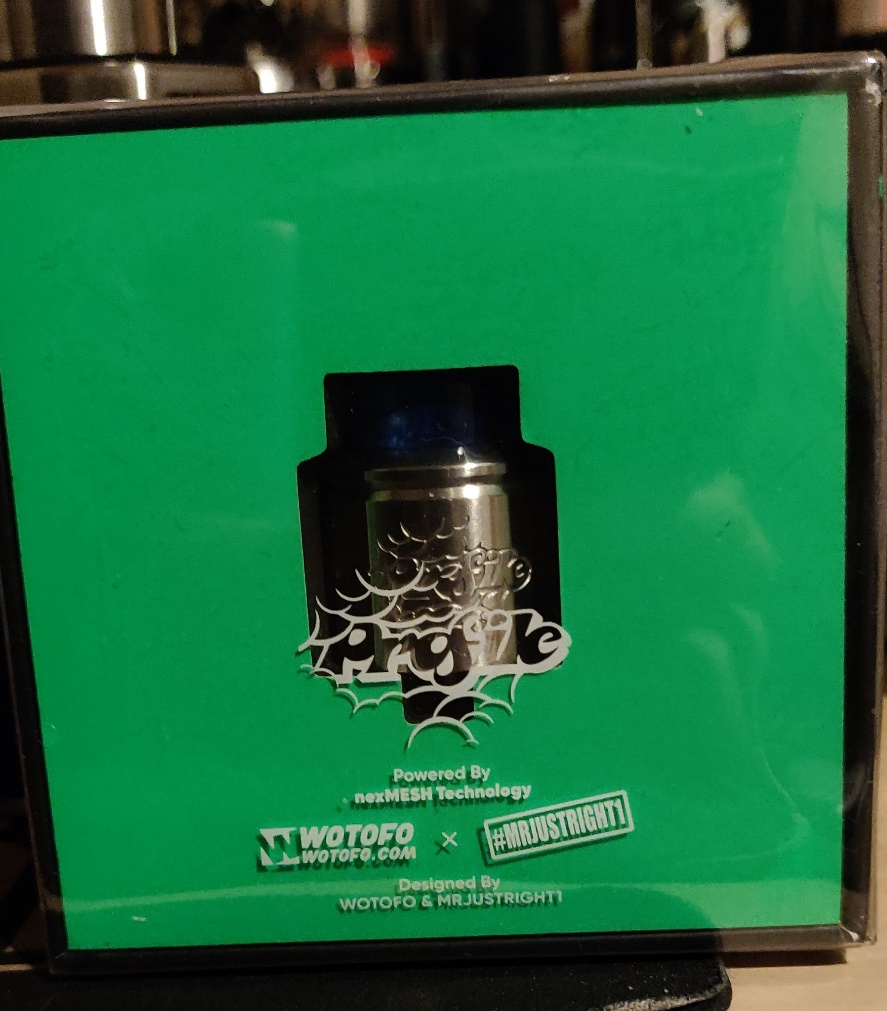 Anybody familiar with either the Profile or Unity will know how easy it is to mesh and wick. Anybody who hasn’t used either, don't worry as it’s an easy task. The bending tool provided ensures that the mesh is the perfect shape to drop into the clamps and the 60mm agleted cotton easily threads through, although some care is needed with the Extreme due to its wire mesh edges.

Once threaded through, cut the cotton as per the instructions and trim it to sit just on the deck. Before fitting the cotton, the mesh should be fired no higher than 20W to check for even heat and hotspots. The bending tool can be used to strum the inside to ensure an even glow. Once wicked, pop it on a squonker (or ordinary mod if dripping) and prime. I found it easier to fit the barrel before priming as this avoided the chance of overspill with the lower deck height. A couple of pulses to vapourise any excess juice and it’s good to go. With all three types of mesh, I started at 60W and increased to my sweet spot of 70W. I did push the watts on all of them, purely for scientific reasons, until it was no longer enjoyable to me, and as long as the wick remained wet no dry hits were encountered. At 90W, it was just too hot for me and not enjoyable, although I’m sure there will some asbestos mouthed vapers who will relish pushing the higher watts. I tried variations on the airflow, some good, others not so, but this will be down to personal taste and I ended up with fully open being the most enjoyable. The Xfibre cotton supplied performed very well, far better than the old 60mm cotton. There was no sagging thanks to the better spring. Juice delivery so far has been great. Despite trying, I haven’t over squonked or ended up with juice in the airholes. Cotton Bacon Prime, which is my usual wicking material of choice, also performed well, using three quarters of a full strip performing the most consistent. 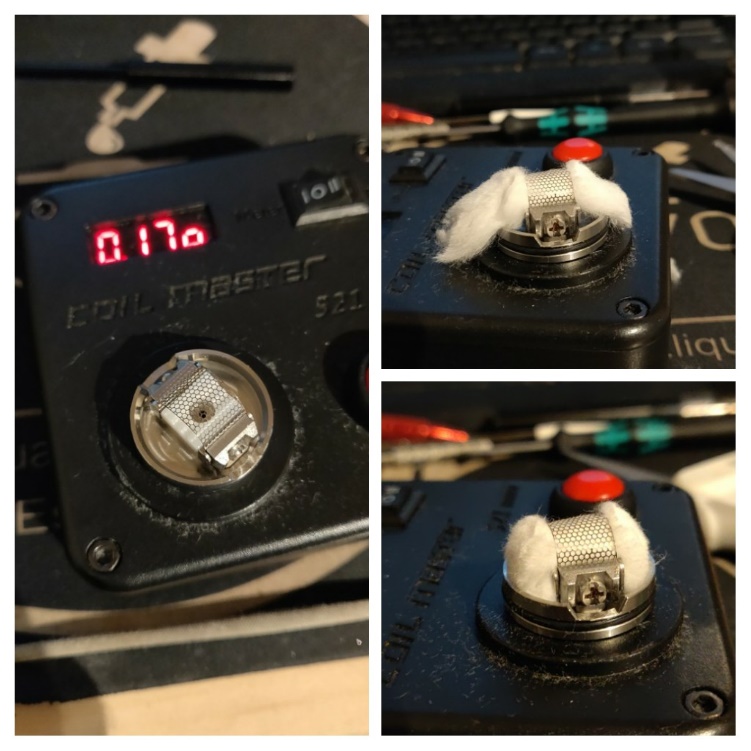 So have all these changes improved what was a very good RDA? Personally speaking, the answer is yes. I’ve used all three meshes within the recommended wattage range and above, and all provided great flavour and clouds if that’s your thing. Even run on identical settings, the difference between them was evident. A coolish vape on the Chill, up to a noticeably warmer vape on the Extreme with the Turbo sitting nicely in the middle, each were equally flavourful. I ended up settling on 70W across the board and, thanks to having obtained two prototypes, I was able to do proper side by side comparison. The redesigned ceramic block with the ridges means the cotton gets evenly soaked and provides a more consistent vape compared to the Profile. Dry hits have been almost non-existent as it’s easier to sense the cotton drying out. The original had a nasty habit of being great one vape and kicking you in the lungs on the very next one. Hopefully SS316l mesh will be available in the future so anybody who likes temperature control and squonking will be covered. Although the original mesh can be used, I wouldn’t recommend it. The shorter mesh gives a flatter arch and airflow doesn’t work as well. When I tried it, I got a burnt taste after a few pulls and checking the build, I could see the top of the mesh and cotton got noticeably darker. This could be the airflow not cooling the top efficiently and basically creating a hotspot. Would I buy it? I have the original and this has already been ordered to add to the Profile/Unity family, so the answer is yes. There are enough changes to definitely state that this is an improvement and until SS mesh is available, the original will still be satisfying my temp control requirements.

More info here https://www.wotofo.com/pages/profile-1-5-rda and current price is around $35. 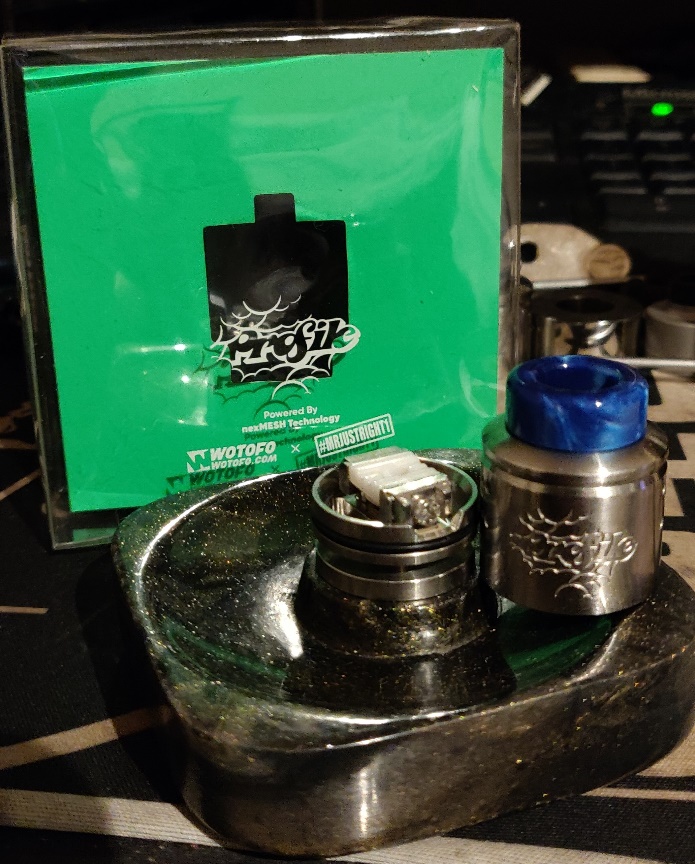