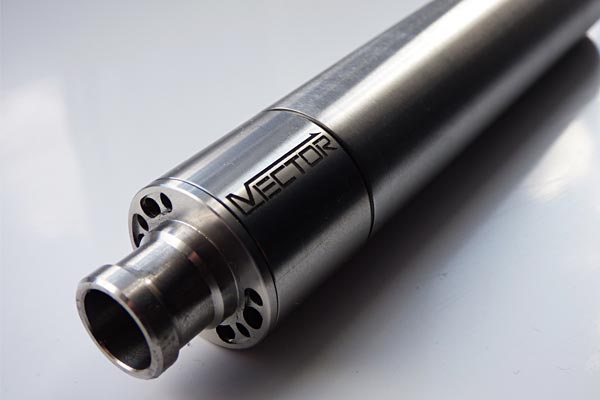 Introduction to the Vector RDA by Vulcan

I don’t know how many of you remember the Vulcan RDA. I got myself one second hand last year from someone on the forum. All in all it was a decent enough dripper that was well constructed but what let it down for me was the fact it was a bit too tall and also the fact that the airflow was a bit too restrictive. However its main advantage was the fact that is extremely easy to build so it was very popular for some people.

Now with an entirely new design the VLS brings you the Vector RDA. This dripper is produced by Vulcan who are a Japanese manufacturer and it is distributed by VLS (Vapourlifestyle).

It might seem a bit confusing that the Vector actually comes in a box that has “Vulcan” written on it but keep in mind it’s not actually a mistake. Vulcan are the manufacturer and their first RDA was named after the company.

I initially assumed the Allen key wasn’t included but it is actually tucked in the underside of the foam inlay. The spares are located under the packaging box flap. 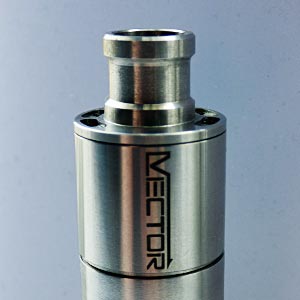 I find the Vector to be a good looking RDA and it seems to compliment most of my mods. The machining itself is without fault, make no mistake this is an authentic well-made product and you are certainly getting your money’s worth! It is actually quite compact and not a great deal bigger than a Mini Freakshow that has a drip tip attached. In actual fact it’s the exact same height as the Royal Hunter but seems far more streamlined.

The Vector follows the examples of the Aeolus and Rogue RDA’s due to it featuring top airflow. It features eight vertical intakes, precisely angled and aligned to directly hover above your build, sending a strong and focused airstream onto and around the coils.

In keeping true to its tradition, all parts are machined from a solid rod of stainless steel. It retains its signature under-passing juice well like the Vulcan which preceded it but now has larger post holes and a spin-proof centre post.

The top-feed air chamber is a leak-free design that allows you to lay your setup down. Obviously over filling will lead to leaks if you turn the mod at too extreme an angle.

The deck itself on first impressions looks extremely shallow but do not be deceived. It holds far more liquid than you might think due to the space that is created under the negative posts.

The Vector features large post holes that allow for pretty much any build you want from Micro Coils to Clapton Coils. Keep in mind that the Vector is for dual coils only and the airflow does not support a single coil. Normally I might criticise this lack of flexibility in an RDA but in the case of the Vector building a dual coil is extremely easy. I think that it would suit anyone who is attempting to do a dual coil for the first time because the deck is easily accessible and the large post holes and grub screws help to make things simple.

The RDA features three parts, the deck, the barrel and the top cap. The drip tip is connected to the top cap airflow adjustment and cannot be removed. For those of you that prefer to use your own drip tips I can see this being something of a gripe.

The drip tip has a small mesh disk inside of it that can be removed. It serves as an anti-spit back guard, keep it in mind because I’ll return to that later.

As mentioned the drip tip is attached to the top cap airflow adjustment. By turning the drip tip you can open or close the airflow. It can be set to its maximum of eight open air holes or set to six, four or two. I found it to be a nice little mechanism and very convenient to use.

I firstly built a 26 AWG (0.4mm) dual coil that had a final resistance of 0.8ohm and I wicked it with cotton bacon. The build was extremely easy to do due to the large holes in the 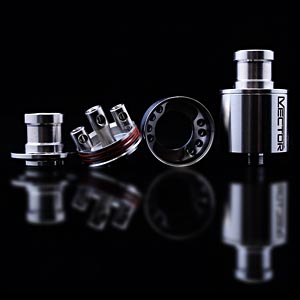 posts. I did use this build for a couple of hours before I decided to rip it out and try something a little bit more extreme.

I don’t honestly see how anyone could have any trouble putting a build in the Vector because it is an absolute pleasure to build on. The grub screws work well and do not cut the wire.

The only thing you really have to keep in mind is making sure that your coils are in line with the airflow. It will be a little unusual for anyone who hasn’t built an RDA that features top airflow before but you will get used to it quickly.

How does the Vector RDA vape?

Now remember that anti spit back mesh I mentioned? Well it’s like this, if you vape the Vector with the mesh fitted it is enjoyable enough, but the problem is that the mesh is so fine it tends to make the draw a little restrictive - I also found that flavour while being reasonably good suffered somewhat. You also can’t really drip juice down the drip tip due to the mesh. Despite this vapour production was good and quite dense.

I had already watched a few YouTube reviews on the Vector since it was an RDA I was already interested in. Some of the reviewers suggested removing the mesh and I have to say I completely agree with them. The mesh itself can be poked out but I have to admit I certainly wouldn’t want to have to replace it because it is something of a tricky fit and if it’s the slightest bit loose it could in the worst case scenario end up in your mouth if you were doing a strong inhale. I don’t think the mesh is that good an idea and in my opinion the Royal Hunter's anti spit back design is much better. Bear in mind that if you like the vape with the Vector as it comes then don’t go removing the mesh until it needs cleaning or replacing.

With the mesh removed I felt that the difference was like night and day. I thought that the flavour was so much better, not Derringer or Mini Freakshow quality where the juice has a real crispness to it but certainly very good, comparable I would say to the Royal Hunter. Vapour production is fantastic and almost doubled since I took out the mesh. To coin a certain infamous phrase “It really chucks the vapour”. Of course you have to keep in mind that I had a dual Clapton Coil build in there and I was vaping at 65W.

One really odd occurrence was that when I had the mesh fitted I got a lot of spit back from my build but after ripping it out the spit back was almost entirely gone. I know that makes absolutely no sense.

Fully opened up the Vector is still surprisingly flavoursome but for best results I preferred it set to six air holes open. You can obviously close it down further if you wish. 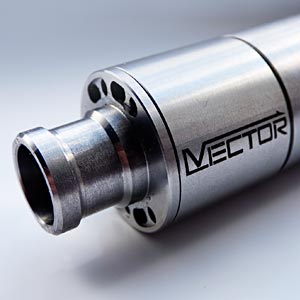 I have run a fair amount of different juices in this RDA because I’ve really been enjoying using it. So far I have used Captain’s Reserve Traitor, Charlie’s Chalk Dust Slamberry. As well as Fallen Angel by Heaven Can Wait and South Coast Vapes Callicustard. All of these juices were a truly lovely vape in the Vector.

There are a couple of negatives concerning this RDA. Firstly depending on your build it does get very hot and because the drip tip is made of steel and attached to the atomizer it means that heat gets transferred to your lips. I think the drip tip itself is nice and a good wide bore design but it seems a bit foolish not to have either an adapter for other drip tips or at the very least some form of delrin mouthpiece.

It will of course depend a lot on what build you put in there and the wattage you vape at so it might not be a concern at all. I have got used to it even at higher wattages and as long as I don’t chain vape like a maniac on it I can’t say it’s ever been a problem but then I quite like a warm vape anyway.

The best thing about the Vector in my opinion is that it doesn’t leak and it’s only ever going to leak if you turn it upside down. For me that makes it very worthwhile. The Vector has very good flavour once you remove that troublesome mesh from the drip tip and excellent vapour production with a deck that is very easy to build on. Its only limitations are that you are stuck with the existing drip tip by nature of its design and that is also dual coil only.

The Vector is currently priced at £50 at most stockists in the UK. Thankfully you can currently get the Vector far cheaper than that. Head over to Intaste who are based in Germany and pick this RDA up for 35 Euros which works out at about £26. Even with postage it is still cheaper and delivery only took a couple of days.  Superb service from the team at Intaste!  Check out their site here http://www.intaste.de/vector-rda.html.

Anyone who loved the Aeolus but wanted more airflow should love this. For anyone else who just needs a decent non-leaking RDA then this is a very worthwhile purchase!