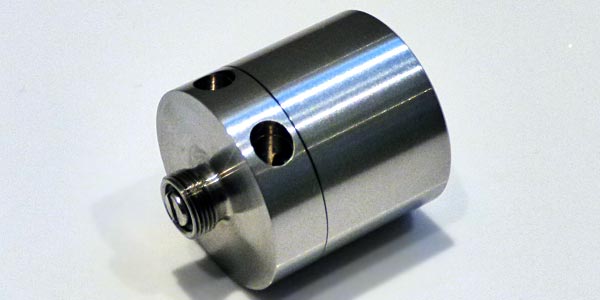 The Raptor RDA is made by Hellfire Mods who are a UK manufacturer. It can be built in single or dual coil configuration and features massive airflow that can be fully adjusted via two valves at the top of the deck. This high end atomizer is designed to offer outstanding flavour and large vapour production but is it everything it claims to be? We shall see.

Please note the Raptor RDA was purchased by myself out of my own wages and was not sent free for review.

This RDA doesn’t actually come in a box but is instead arrives in plenty of bubble wrap. The Non-bottom fed post only comes with the new versions. The one I have was acquired second hand and is based on the earlier production run so it is the non-bottom fed version by default. Compared to more inexpensive RDA’s you don’t really get a lot with the Raptor but considering the excellent build quality spares aren’t really needed. 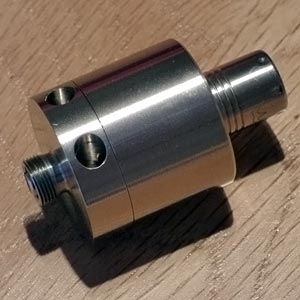 Once upon a time I had a Veritas (clone) and it was my favourite RDA that I constantly used until one day it decided to drop the bits. In my ways the Raptor has similar design aspects to both the Veritas and the Marquis. However it is important to note that both manufacturers pursued their own design philosophy and Hellfire have been making this style of RDA for much longer.

I had seen quite a few reviews of the Raptor and it was something I definitely wanted to get my hands on fortunately I got mine second hand in mint condition for a very reasonable price.

The Raptor is 22mm in height excluding the 510 pin and this makes it a very compact RDA. The build quality is exceptional and everything is extremely well machined. The top cap is secured by a single O-ring but it is probably one of the best I have ever come across making for a very secure fit but also being easy to remove.

The deck is similar to both the Veritas and the Marquis and features a single positive post that protrudes at the top of the deck with two negatives that sit at the bottom on the rim of the juice well. The posts all use Philips head screws that are easy to work with and trap the wire well. 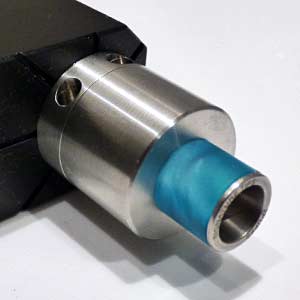 At the top of the deck you will find the two airflow ports and above them there are the valves that control the airflow. Each port can be individually adjusted and fully closed down if you want to only have one open for a single coil build. As Hellfire Mods put it you can go from “zero to hero”.

The valves are best adjusted by using tweezers although you can do it with your fingers but it’s a bit trickier. One awesome feature is that you can remove the valves for cleaning in case you ever have juice that leaks into your airflow due to over dripping. Both valves are secured by dual O-rings.

In terms of styling the Raptor looks extremely streamlined and is completely free of logos or engravings. The only thing that stands out are the massive dual airflow ports at the base. The Raptor sits flush on every single mod I have tried it on and the 510 pin is fully adjustable.

The juice well is quite deep and you can get a reasonable amount of juice in there, about the same as the Marquis but less than the Veritas.

The airflow on this RDA is completely nuts but in an awesome way. As mentioned it can be fully adjusted to suit and you only need to adjust the valves slightly to notice a significant distance. In many ways this RDA has some of the best airflow I have come across because you can go from a very restrictive vape to full on insane!

The airflow is quite unique in this RDA because the way it works is that it comes in horizontally from the bottom then rises vertically up before curving and hitting the coil from behind. Now most of us know that bottom airflow RDA’s typically give the best flavour but airflow that is directed to hit the coil from behind is extremely good.

Building the Raptor might be a challenge if you aren’t used to vertical coils. At one point I did find them an absolute pain but lots of practice with RDA’s such as the Veritas, Origen and the Troy 2X means I am quite comfortable making them now. What makes the Raptor a little tricky is the fact that the positive post doesn’t have that notched nut to hold the wire like the Marquis so it can take a little longer to secure a dual coil build. The Raptor does have recessed holes at the bottom of the juice well just like the Marquis but you don’t get any building rods with this RDA. Nevertheless if you wrap your coils around a drill bit and then position it in the hole it does make things simpler. 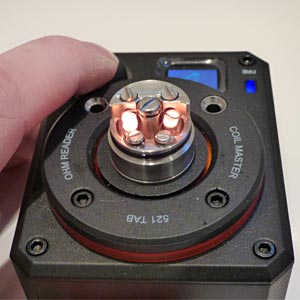 The first build I did in this RDA was using 26AWG (0.4mm) Kanthal and I just made a single coil that had a final resistance of 0.8ohms. I wicked the coil with Cotton Bacon and proceeded to saturate the wick with juice and fill up the juice well. On this occasion I was using VGOD Dewbie which is a honeydew melon and cream flavoured juice.

I closed down one of the airflow ports and only had the port directly behind the coil slightly open. I took my first vape and I found that flavour was really good but not exceptional and vapour production was reasonable. Opening up the port further the vapour understandably increased but surprisingly there wasn’t a noticeable loss of flavour.

I realised to myself that most RDA’s of this type tend to perform far better in dual coil mode so I ripped out my current build and give everything a good clean. My next build was one again using 26AWG but on this occasion I went for a 0.4ohm dual coil build. Both coils were wicked with Cotton Bacon and this time I used Element Vanilla.

Vaping at 45W on my iPV4s with both airflow ports half open this was an amazing vape! The flavour was outstanding and it literally felt like I was eating gorgeous mouthfuls of some incredible vanilla dessert! In many ways the flavour is almost overpowering because it really is so fantastic and I was left gobsmacked by the quality of the vape. Vapour production is brilliant and this RDA seriously puts out massive dense clouds.

For a laugh I fully opened up both airflow ports and vapour production went through the roof! Within minutes of taking a few hits on this RDA by room had become thick with fog. The best thing though is the fact that flavour was still top notch even when fully opened up.

Due to the airflow the Raptor is quite a noisy RDA and I am not kidding when I say it sounds like a jet fighter firing up its afterburners. In many ways the huge airflow ports are like some dripper equivalent of engine intakes and this thing really does roar when you use it.

I have run lots of different juice in the Raptor and whatever I use always results in a highly flavoursome experience with lots of dense clouds. If you build it right then you will get a stellar vape!

Take care not to over drip with this RDA because that can lead to leaking but this is something you have to be mindful of with other drippers so I don’t consider it a flaw. 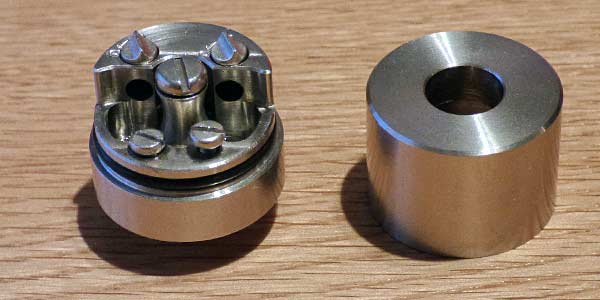 In my opinion the Raptor is a superb RDA and comes highly recommended. The flavour I get from my juices in this atomizer is exceptional and the vapour production is awesome! Combined with airflow that is absolutely mental and fully adjustable to suit both single and dual coils you can’t really go wrong with the Raptor. The flexibility to have a restrictive draw or a fully opened up lung inhale means this RDA caters to a wide variety of users.

Due to this RDA requiring vertical coils it certainly won’t be easy to get to grips with for anyone new to rebuildables. Of course if you are willing to give it a go it is definitely achievable and you will be rewarded with a cracking vape!

The Raptor is priced at £108 and yes it is expensive but it is extremely well built and should last you a very long time. If price is no object to you and you really do love the sound of it, then definitely get one. However if budget is more of a concern then do what I did and try to get one second hand because it is certainly worth it and they do pop up in the classified ads from time to time.

The Raptor can be purchased here from Hellfire Mods. 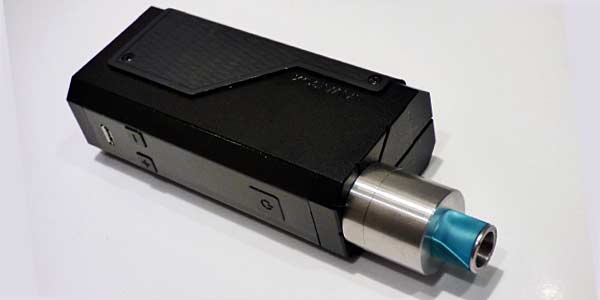