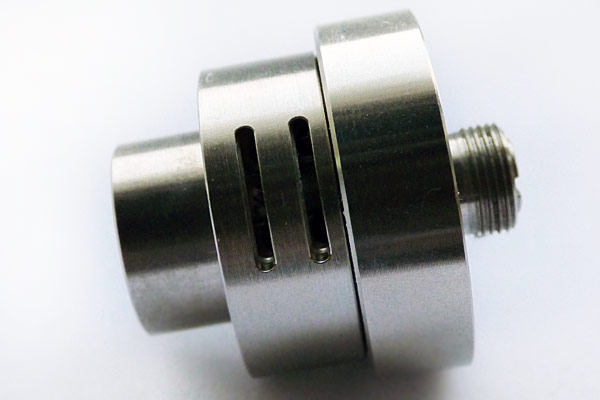 The Mulciber RDA is designed and manufactured by Tiberian Vapor Co. This appears to be their first offering and is a 22mm diameter RDA designed primarily for flavour. It features adjustable airflow (includes two different airflow rings), a simple to use Velocity style deck and a bottom feed pin option.

In addition the Mulciber is highly compact and can be set up in single or dual coil configuration. So let’s have a thorough look and see what it has to offer you!

In many ways the entire design of this RDA resembles the old Sat22 genesis atomizer (you may need to have been into vaping a while to remember that one).

The design to some may even appear quite ugly with its stepped shape, but keep in mind that it is only 18mm tall, and features a reduced 15mm chamber. As such it is one of the more compact atomizers you can find on the market. 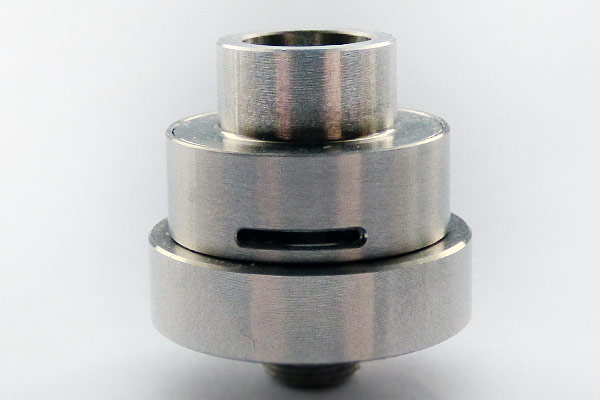 Of course the general aesthetics like anything are down to personal preference. Personally I actually like it but then I do own a Sat22 and happen to like that design too!

On the whole the construction is really good. The two included airflow rings are both quite thin and while acceptable feel a bit cheap compared to the rest of the atomizer. They can also be easily knocked if you are not careful. One area where the Mulciber really falls down is the poor quality of the O-rings which are super thin. While they do the job in some respects, the top cap it is still very loose and you can easily remove it. Of course considering that the well is tiny and doesn’t hold much juice the ease of removal actually becomes a positive point... 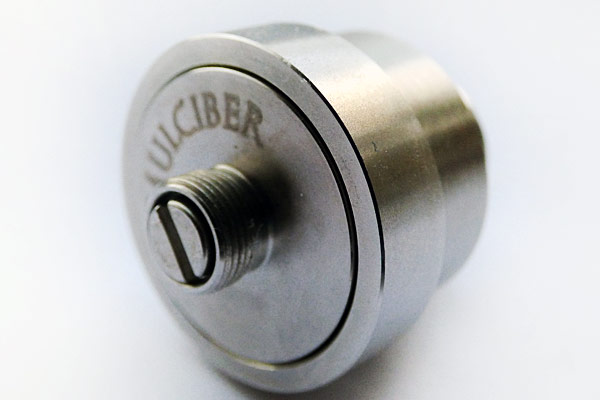 The Mulciber features a standard 510 drip tip fitting but a drip is included with this RDA. I used the very narrow Sat22 drip tip which worked perfectly, but not surprising really considering the overall design resemblance.

The deck features a two post Velocity style design which is highly approachable. Lastly the Mulciber can be set up with either a standard 510 pin (pre-fitted), or with the included Bottom Feed pin for use with Squonking devices.

Included with the Mulciber are two airflow rings. One is intended for single coil builds and the other for dual. Airflow is fully adjustable and you can if fully opened up with offers a rather restricted lung inhale with the dual or as a very restricted lung inhale approaching a loose mouth to lung with the single slot airflow ring. Closing the airflow rings down obviously creates a more restrictive shape but the single airflow slot is excellent for mouth to lung fans in my opinion since you can get a very tight vape! 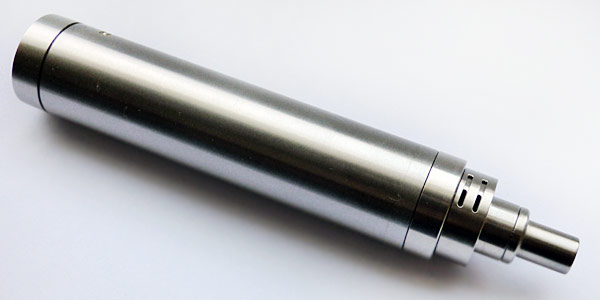 I had to put this review off for a little while due to one specific reason - no screwdriver was included. Now you might think “Hang on buddy, as a reviewer you must have loads lying around”, and while this is certainly true I didn’t have one the right size for the tiny Mulciber flat head screws. To begin with this was a major annoyance to me, since I was really looking forward to trying it out. So be prepared should you wish to pick up one of these. Apparently all new models are now pre-fitted with the included grub screws, so that might make things a little more tolerable. I would love to rant at length about this particular issue but I’m not going to, so all I will say instead; is it really that hard for the manufacturer to include a suitable screwdriver?

Now once you have a suitable screwdriver (many thanks to Crème de Vape for the one included with my Kayfun Prime order) then the screws although tiny and quite difficult for middle aged folks like myself to see, actually work really well.

The post holes aren’t exactly massive, so thicker wire and exotic builds are not an option with this RDA. At most you should be okay with 3.5mm ID coils. The two post build deck is very Velocity side, but since it is positioned to the edge of the small juice well, it means you have to stack your coils, one above the other, if choosing to go for a dual coil build. Now while I did try a dual coil build simply to cover all bases, I personally didn’t see the point in it considering the very limited well, but you may feel differently about it.

As I said the well is very limited and seems more like a tiny saucer than an actual well. In some respects it felt quite similar to the one in the old Quasar RDA. On the plus side of things you don’t need a little of wicking material and the juice is soaked up very effectively when vaping. Of course the well is not really an issue if you decide to fit the Bottom Feed pin and use it with a Squonker. If you choose that option I would take care since it would be very easy to over squonk (shouldn’t be such an issue for experienced squonkers) and have juice pouring down your mod.

Topping up the well when used in standard RDA configuration is simple. You only need to remove the top cap, which comes off easily and squeeze in a little juice. 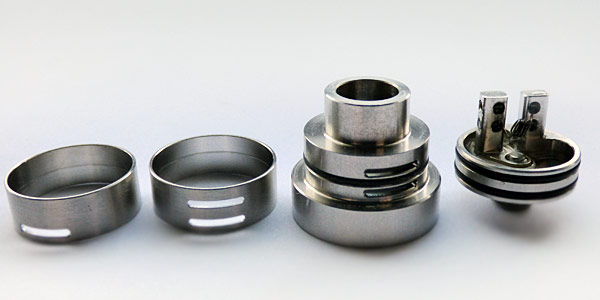 I tried out a wide range of different juices in this RDA but one thing you really need to keep in mind is that while the flavour is indeed excellent, in my opinion this does not quite offer Snapdragon or Hadaly quality levels of flavour in single coil mode. Of course those RDA’s are way more expensive so the comparison is perhaps a little unfair. Nevertheless if you just want really nice flavour, the Mulciber will certainly supply it, and you can easily pick out the full range of notes in most juices. Most users will certainly be happy with it.

What I really did like about this RDA is that because the well is extremely shallow it works very effectively as a juice tester. Quite often I will end having to vape a full well’s worth of a flavour I’m reviewing that might not be my cup of tea. Now this always seems like such a waste when I could pass that juice on to someone who might really like it. With the Mulciber there is no such issue and after about ten hits the well is dry. I did find on occasion I got some very slight spit back but since it was so infrequent it didn’t hamper my enjoyment.

A Dual coil set up is far more impressive in terms of flavour. It really does start shine in that mode and compares well with more expensive RDA’s, but the downside is the juice gets vaped off excessively fast, in a blink and you’ll miss it kind of way. For me the flavour boost doesn’t really feel worth it, since I was more than satisfied with the performance and flavour from the single coil. I also wanted to keep vaping it in mouth to lung mode which is less of a suitable option with the dual coil airflow ring.

Vapour production is limited in single coil mode but more than acceptable for mouth to lung users. In dual coil mode cloud production is a little better as you would expect, but while decent enough it is no room fogger. 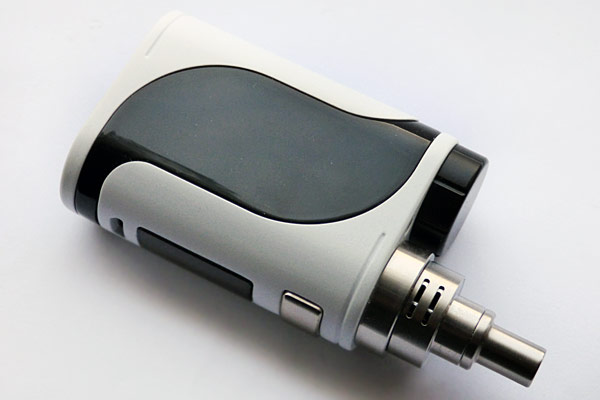 While the Mulciber is by no means perfect given some of its shortcomings, the vape it offers is highly enjoyable. Flavour is extremely good and you do have a pleasant amount of options in terms of build and airflow. It would certainly work well with a squonking device providing you don’t get over zealous topping up the well.

If you’re a fan of a more restrictive vape or actually prefer mouth to lung then this RDA is really going to suit you. I certainly liked it a great deal in that respect.

The real downsides are the limited well when used specifically as an RDA, the very loose top cap (due to weak O-rings), and the lack of an included drip tip. Another problem might be the lack of a suitable screwdriver (bet you thought I’d let that slide). Yet despite all of that I really enjoyed using this RDA as a very pleasant juice testing atty.

I think given the reasonable price it is certainly well worth checking out, as long as it ticks most of the boxes for you!