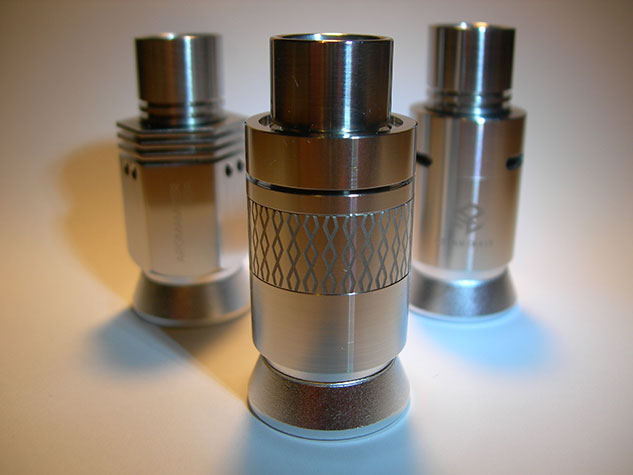 IMPORTANT NOTE – this review is based on a test sample not the manufactured version; details are very likely to change. I plan to update this review once the production version has been released onto the market.

The RDA with its signature top down cyclonic airflow design was the first Aromamizer product launched by Steam Crave and was soon followed by the v2 and the best-selling tank, the RDTA. The RDA v1 was available in hexagonal or round formats both with fixed airflow. This produced a restricted lung hit which users either liked or disliked. It soon built a reputation as a top flavour atty. The v2 was released with an additional Pyrex-barrelled version, also with fixed airflow, but the revised v2 hexagonal and round versions both had improved and adjustable airflow. The deck and chuff cap were identical to the v1. Squonking versions were then produced to complement the release of the Steam Crave Squonk Mod.

The v3, or V-RDA as it has actually been designated, has undergone a major redesign. It retains the signature cyclonic airflow and the same chuff cap and 510 drip tip adapter. The key developments are the replacement of the previous 3-post deck with the 2-post “Velocity style” build deck (so beloved of RDTA users) and a substantial increase in the finely adjustable airflow – from fully closed to wide open. The improved airflow has been achieved in part by reducing the number of blades on the cyclonic inserts from six to three.

As with the v2, the barrel section has a separate AFC ring and removable cyclonic airflow inserts. The barrel however is now in 3 parts; the airflow insert has finely threaded connections to the top and lower sections, allowing the user to choose between the o-ring secured Pyrex glass or stainless centre sections. The AFC ring is on a threaded connection to the top section with precise, o-ring controlled tension to prevent accidental adjustment. 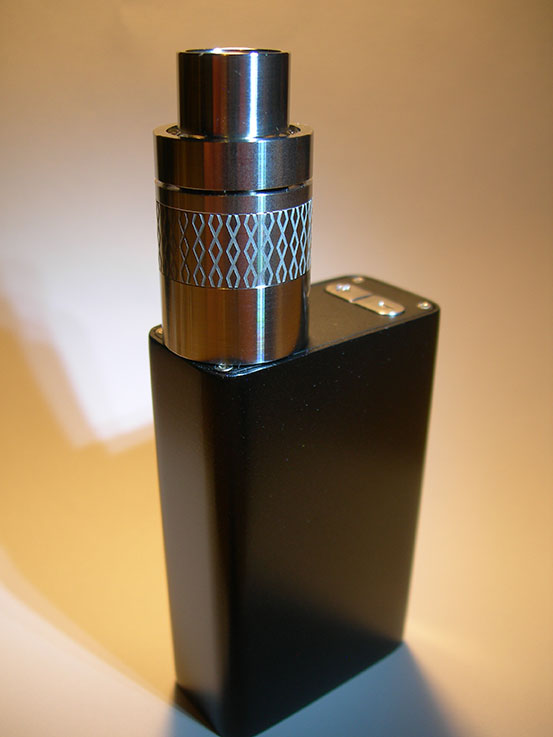 Aesthetically, dressed with either glass or stainless barrel insert, the V-RDA is very clean and sleek looking. My personal preference is for the engraved stainless option. Despite the barrel section being taller than the v1 and v2 the RDA is the same overall height due to the chuff cap sitting lower inside the top section. Visually it appears much wider than the 1mm actual difference in girth compared to the 22mm round v2.

The build quality is excellent, as we’ve come to expect of Steam Crave. The blades on the cyclone inserts are however quite sharp at the bottom, so users should use a cloth when assembling and disassembling this piece to protect themselves from potential cuts. The cyclone inserts are now made from stainless steel, unlike the v2 inserts which were silver plated copper. The AFC o-ring, when lubed, produces a smooth action and, when wet with juice, the chuff cap o-ring feels slightly looser than the previous versions which always had a perfectly snug fit against their delrin inserts. A single wrap of dental floss under the chuff cap o-ring was the perfect fix for a very slight wobble. 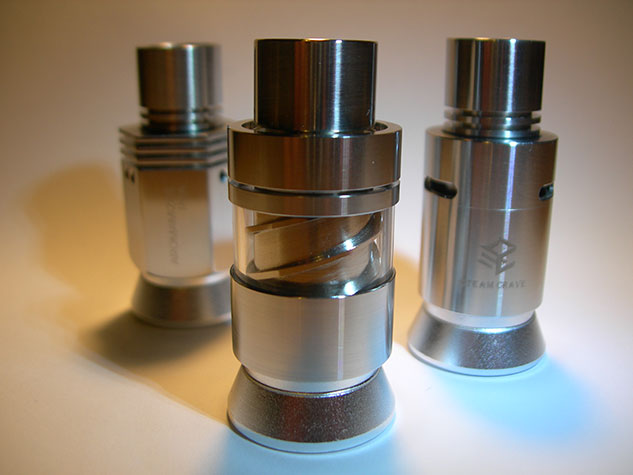 The deck, as you’d expect, is very nicely machined which makes it a joy to build on. The squonking pin is adjustable and leaves the perfect hole through the positive post connection. Less impressive however is the silicon o-ring for the AFC ring, this could definitely be upgraded to match the general build quality. The remaining o-rings are fit for purpose. Overall, it’s a very good looking RDA and the user has the option to select the preferred final appearance. Coloured glasses would give even more options.

How does the Aromamizer V-RDA vape?

My first build was dual horizontal 2.4mm 26/32g claptons, 6 standard wraps producing 0.33ohms and wicked with Muji unbleached organic cotton. Adjusting the draw was a breeze. To replicate the restricted lung inhale of the v1 the AFC will be barely open … to match the v2 it will be open less than 1mm. Open wider and the improvement becomes patently obvious. The only restriction which you can feel will be from the spitback baffle on the chuff cap. The enormous range of the airflow setting allows the vaper to dial in the watts and airflow to suit flavour and/or clouds to his heart’s content. After breaking in the coils and wicks at around 40watts, I took this build up to the maximum 100watts on my Tesla Nano without experiencing a hot or unpleasant vape … or any spitback.

After a few hours I changed the set up to use the glass mid-section with the drilled cyclone insert. This insert seemed to make no noticeable difference to the vape to me and there’s nothing really to see through the Pyrex … just the nicely machined spiral blades. The difference however is not purely aesthetic. The internal dimension of the glass is 18.5mm, whereas the stainless section ID is 20mm, so the stainless section will produce more airflow and presumably, slightly less cyclonic effect than the glass, but I can’t say that I noticed that too much … perhaps because I didn’t have two atties to vape side by side.

My second build was very much more straightforward. Vertical mounted this time, between the two sets of post holes. Still at 2.4mm ID, 7 closed wraps of 0.4mm (26g) kanthal producing 0.4ohms. The Muji wicks were spread like a fan across the deck and the top tails trimmed flush to the top wraps, below the posts. At just 20watts, drawing a restricted lung hit, the Aromamizer delivered pleasing and flavourful vapour. This proved there was no need for fancy coils, advanced builds or massive power to get a good vape from this dripper.  The deck could be filled with plenty of juice and the wicks were kept out of the airflow channels at the edge of the deck. The cyclone was doing its thing! 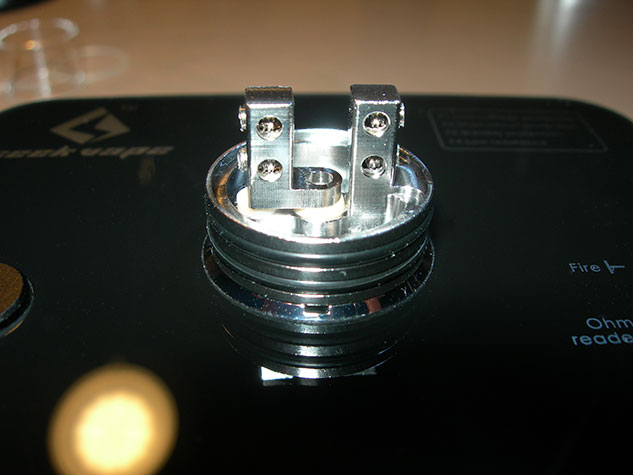 At 25 and 30 watts with a little more air, the results were even better. From a flooded deck I managed 14 draws before I sensed the wicks drying. Midway I inverted the atty and looked through the glass to see if the juice would flow down the spirals. It did, like an Archimedes screw, but even laying a flooded Aromamizer on its side failed to produce a leak.

Dripping couldn’t be easier, either by taking off the barrel or just the chuff cap, you could pour juice in. The spitback protection works flawlessly, delivering warm vapour with no stinging droplets of boiling juice.

A temperature control build would be next. This was a return to dual horizontal coils using Stealthvape’s NiFe30 and much looser Muji wicking. With the 2-post deck, building could not possibly be any easier. Setting the mod to 210C and 35 Watts I was immediately rewarded with lovely warm, flavourful clouds. The airflow is easily dialled in and I was contentedly vaping away.

I thought the vertical configuration warranted another go, so my fourth build was dual 3.0mm, 8 close wraps of 0.5mm (24g) kanthal producing 0.31ohms. This gave me a nice, warm vape at 50W and after increasing the airflow I ran it up comfortably to 80W without the vape getting hot. Looking down into the chamber from the top I could see that there was still enough space for even bigger coils if they utilised more of the space between the posts. The deck space seems more constrained for horizontal coils and the main benefit of verticals is that the airflow is not obstructed in any way by the wicking. Muji certainly wicks fast enough to keep up and the deck is deep enough to hold plenty of juice. You can happily flood the deck on the V-RDA without suffering spitback or leaking.

The sleek styling, cyclonic airflow and spitback protected chuff cap make the Aromamizer V-RDA instantly recognisable as an evolution from the earlier versions. The big improvements are clearly in the ease and flexibility of builds and even more airflow. The deck space doesn’t allow it to compete with the likes of the Velocity or Twisted Messes in accepting crazy builds for out and out cloud chasing but it does offer a very practical, leak free dripper experience with understated elegance and absolutely no compromise on flavour production. The vape quality is extremely smooth; as a rebuildable this will naturally depend on your build though the V-RDA offers excellent performance throughout a huge range of vaping styles as my four quite different builds testify.

As with other Steam Crave products, pricing is likely to be very reasonable and you won’t be disappointed with the build quality you get for your hard-earned.

A thread is up on the POTV forum, if you want any more details about this bit of kit then please do post on there or in the comments section below. 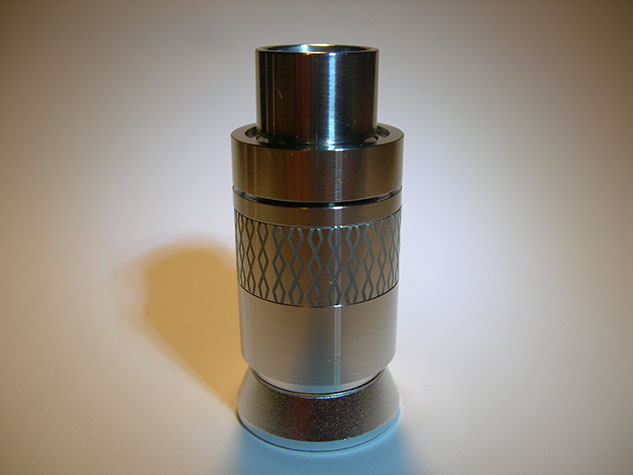