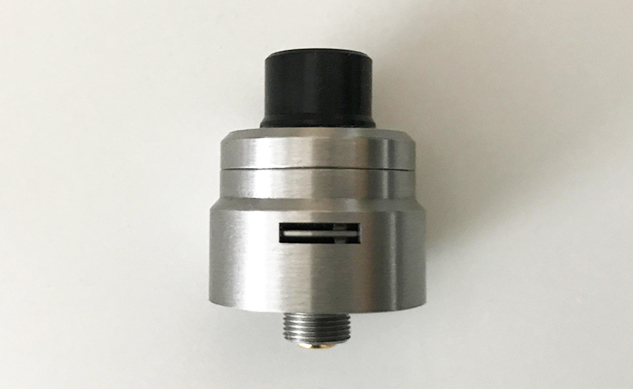 Armor Mods are a manufacturer based out of Malaysia run by some recognizable names within the high end vaping scene, and Armor Mods seemed to have come out of nowhere in late January with the release of the Armor 1.0 RDA which has taken the scene by storm recently, creating a huge level of hype and demand. It’s an atomiser that is priced extremely competitively when stacked up against it’s compatriots, especially when you consider that accessories such as a bottom feeding pin and single coil reducer are included as standard, whereas others charge extra for these parts.

To have the chance of obtaining an Armor 1.0, you need to like the Armor Mods Facebook page, then keep an eye on that for posts that state the group is now open, and you have to register your interest in the comments. It may seem a bit of an obtuse way of getting into the group, however it gives the manufacturer a chance to vet each person getting entry to the group, to weed out those that are looking to purchase the Armor 1.0 for more unscrupulous reasons. Some other Facebook groups have recently been provided a small batch of Armor 1.0’s for their members, which have been allocated via the use of a randomiser.

There isn’t any way of obtaining a brand new one direct from the manufacturer outside of Facebook at present, and it’s unclear if this may change in future. It’s sure still not easy to obtain an Armor 1.0 at the moment, even though the Armor Mods team are doing their best to get one into the hands of everyone that wants one, however it is easier to obtain than a fair few other highly desired high end atomisers. I do respect the way that the Armor Mods team are handling the production and distribution of the Armor 1.0, as those that don’t own one are getting priority over those that do.

I managed to get lucky recently and get the opportunity to purchase an Armor 1.0 through a randomiser run in the Squonking Hall of Fame group on Facebook, which also got me entry to the main Armor Mods Facebook group, I’ve spent a fair bit of time with it now and here’s what I thought...

When you receive your Armor 1.0, you’ll find it packaged within a brown envelope that has been stamped with the Armor Mods logo in black, the contents will have been split into two small baggies. You’ll receive the Armor 1.0 with the black delrin drip tip and gold plated 510 connector fitted, a single coil reducer inside the Armor 1.0 itself, a gold plated bottom feeding pin for squonking, 510 drip tip adaptor, spare o-rings and a couple of spare post screws.

Measuring in with a 22mm width and a 17mm height (excluding the drip tip and 510 connector), the Armor 1.0 is a small and exceptionally well crafted RDA, with a flawless stainless steel finish. From looking at the Armor 1.0, you can tell that a lot of time and thought was poured into the development of this atty, the build quality and design overall is of the highest quality, with no machine oil present and no sharp edges or burrs. My tip cap was a little on the stiff side when I first removed it, but I haven't had an issue with it since then. 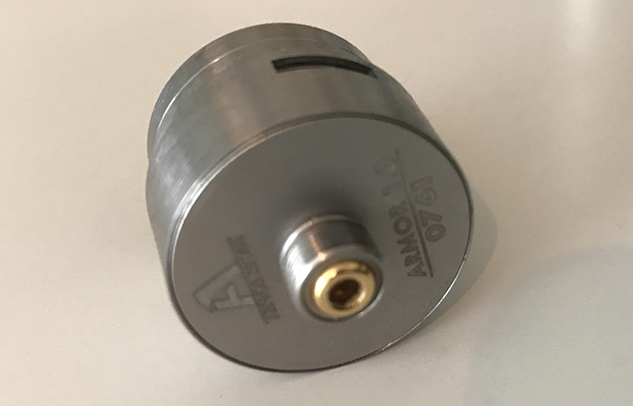 The top of the Armor 1.0 features a removable integral black Delrin drip tip as standard, and a 510 drip tip adaptor is included should you wish to use your own drip tip. The airflow is also adjusted by rotating the ring around the outside, which can be removed and even customized with different aftermarket airflow control rings designed for use with the Armor 1.0. The base features the Armor Mods logo, Armor 1.0 and a unique serial number laser engraved on and a gold plated adjustable 510 connector is present which can be switched out for the included gold plated BF pin if you want to use the Armor 1.0 with a squonker. 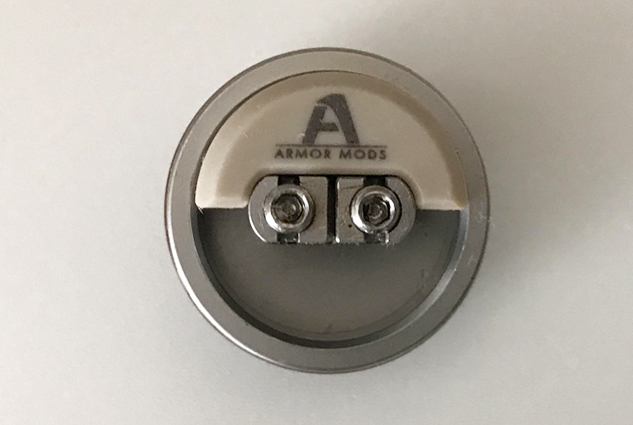 Additional accessories will be available for purchase through the Armor Mods group during certain periods of availability, such as a black delrin AFC, delrin chuff styled cap, different drip tips and other accessories yet to be announced. I do love the fact that Armor Mods include the single coil reducer, 510 drip tip adaptor and the BF pin with the atty itself, rather than charging extra for it unlike certain other manufacturers! 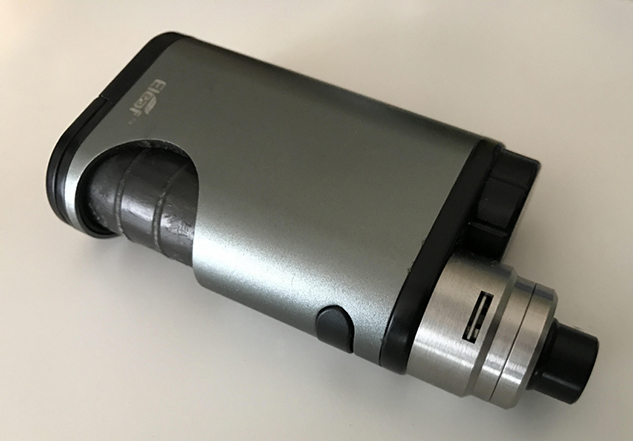 One of the aspects that I really love about the Armor 1.0 is building on it, fitting a new coil to this atomiser never seems to be a chore at all. The Armor 1.0 has been designed with both single and dual coil builds in mind, if you are a fan of single coil builds and restricted draws, you’ll want to make use of the included single coil reducer by placing that at either end of the deck, which also has a generous juice well present. 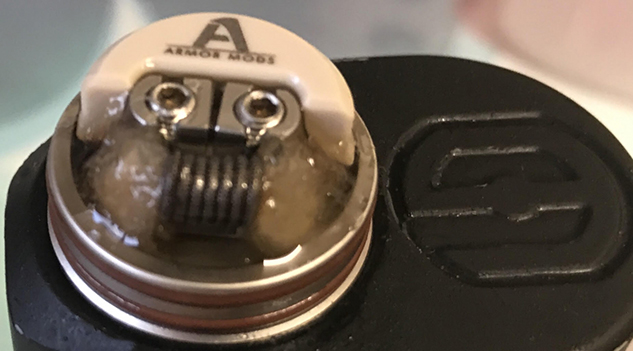 There is a two post system in place, with both posts placed centrally on the deck. You’ll notice that there is a hole machined near the base of the posts- this does a superb job of feeding juice to the deck when squonking and sucking the excess back down. Post slots are pretty much shaped vertically, with grub screws present to hold your coil legs down. It’s really simple to just slot a build in, tighten it down and vape away whether you are going for a single or dual coil build. There’s a decent amount of space here, and you can get some decent sized coils in too, however in terms of wire thickness you won’t want to go much thicker than 0.5mm, which seems to be the largest size I can get in.

When fitting your coils, a good tip to follow is to have the top of your coil pretty much in line with the top of the posts, and the coil as close to the posts without the coil actually touching the posts themselves. This seems to offer me the best results in terms of flavour, however you may want to experiment with different coil positions in order to find what works best for your own style. 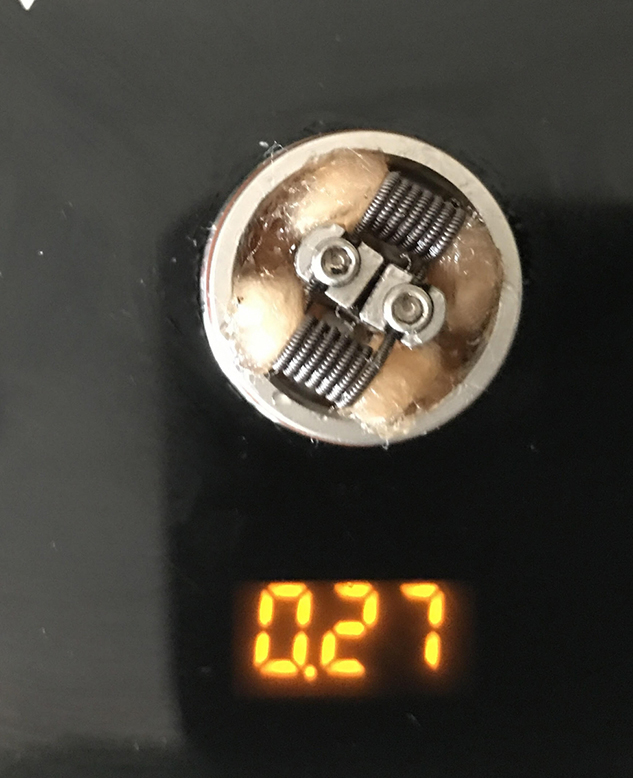 At the time of writing the review, I had tried three separate builds to gauge how it performs across different scenarios. My first build was a 26/30AWG SS316L Clapton single coil with a 3mm ID, which came out at 0.58ohm cold. This build I used to gauge how well the Armor 1.0 would perform on a regulated mod, and I used my Vapedroid C1D2. After playing around with the wattage, after testing this build from 25W-50W I found my sweet spot to be 38W with this build. I get a very warm vape, further intensified when using the single coil reducer, that is just packed out with wondrous flavour from start to finish. It was a phenomenal start!

Secondly, I built a 9 wrap 0.4mm kanthal single coil with a 2.5mm ID, coming out at 0.95ohm. I built this in order to test how the Armor V1.0 would perform with mouth to lung vaping on a regulated device, again using the Vapedroid C1D2, and 14-20W with the single coil reducer installed. I did find you can’t achieve a ‘true’ mouth to lung vape, with a very tight draw, however you can get a loose mouth to lung vape. The tighter draw provided a cooler, intense vape again with no let up on top quality flavour, however my own preference was the warmer, looser single coil vape I got from my first build. 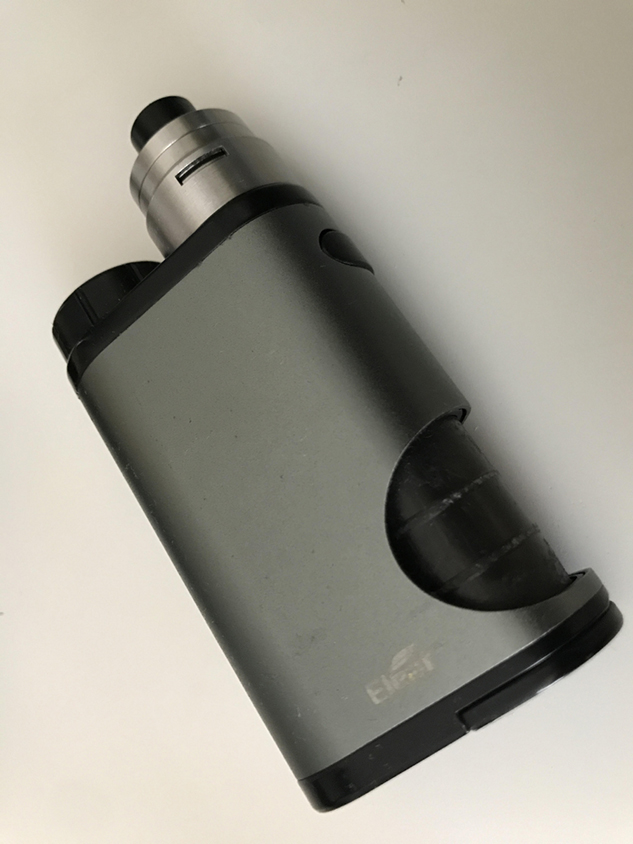 My most recent build has been a dual coil build with 9 wraps of 0.5mm SS316L and a 3mm ID, which comes out at 0.25ohm cold, which is one of my favourite builds to use with a mechanical squonker, and I used this build to gauge performance on my Frankenskull mechanical squonker. I tend to use SS316L thanks to its fast ramp up, and this build arguably provided the most intense experience out of the builds I experimented with. I was taking shorter pulls, which were giving me a massive burst of flavour, which I couldn’t get enough of! Along with how well it feeds liquid to your build and drains the excess away, the Armor 1.0 is an outstanding choice for an atomiser to use with your squonker.

Overall, I truly believe that not only is the Armor 1.0 one of the best performing flavour RDA’s out there, it is also one of the most versatile as well. Across the board, this has provided me with a simply exceptional vape, packed full of flavour, whereby I could pick out each and every flavour note present in my e-liquids no matter what e-liquid I was using. If you crave top notch flavour from your atomiser, than the Armor V1.0 is a must buy.

Now and again you’ll pick something up which just blows your mind, and I can categorically say the Armor 1.0 really did bowl me over. It’s available for an extremely fair and reasonable price, built exceptionally well, and it comes with all of the accessories that many other manufacturers would charge you extra for.

The performance is right up there with the absolute best- if you are looking for an atomiser that can produce one of the most flavourful vaping experiences you have ever had, then the Armor 1.0 will be right up there with the best of them. It has absolutely become a mainstay of my collection, and I will without a doubt be looking to add more of these to my collection, alongside whatever future releases Armor Mods have in store.

Armor Mods have come out of nowhere and taken the high end vaping scene by storm, and as well as concentrating on getting as many Armor 1.0 RDA’s into the hands of those that want them, they have got some other very interesting projects up their sleeves. On the Armor Mods Facebook group they recently revealed some teaser images for the new mechanical squonker that they have in production, and this is something that has got me drooling. I for one can’t wait to see this and more from the Armor Mods guys in future! 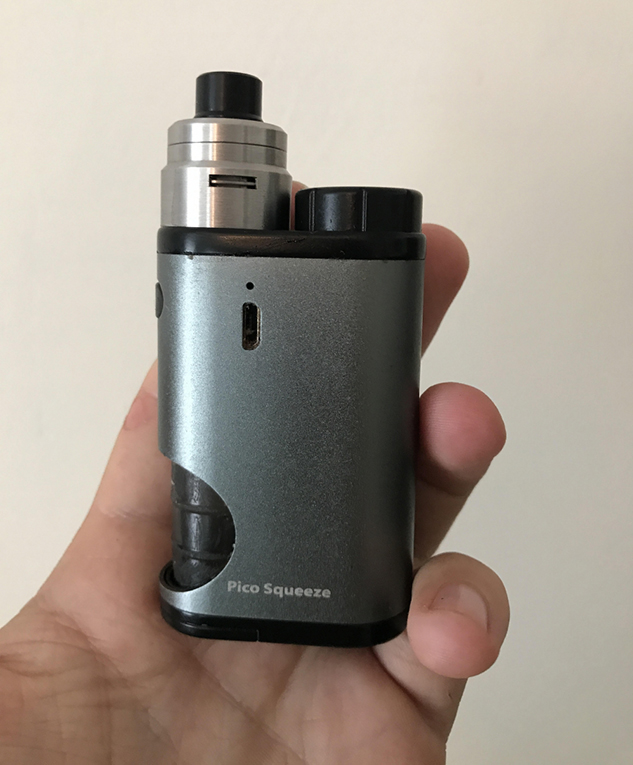