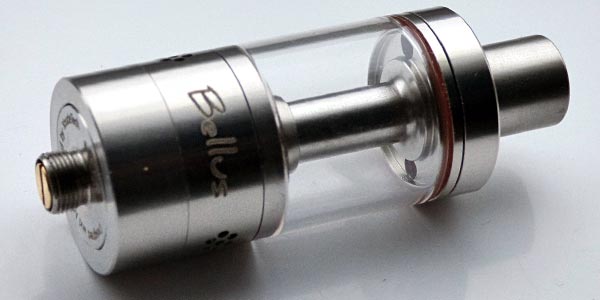 Just about everyone is familiar with Youde who have brought us atomizers such as the Zephyrus, Goliath and Goblin/Goblin Mini. The Bellus is their latest offering and is designed to offer a vape that is comparable to a dripper experience. Featuring a massive 5ml capacity and allowing for single and dual coil set ups this RTA sounds very exciting but is it as good as it sounds? We shall see.

The Bellus comes in clear plastic packaging which is very reminiscent of the Zephyrus. You do get a decent amount of spares for your money and it is nice that there is an adapter plug (like the one that came with the Goliath V2) allowing you to set up this tank in single coil configuration.

In terms of its overall looks the Bellus is very similar to the Goliath V2 but in my opinion the design is nicer. The parts seem well machined and everything fits together well. Thankfully unlike the Goliath V2 that I reviewed there are no sharp edges. The Bellus is top filling and this is accomplished by unscrewing the top cap. Initially it was a little stiff to unscrew but it has got better over time. The threads are actually quite small so on occasion it takes more than one attempt to refit the top cap. There are two holes in the top cap and despite some reviews I watched that said the holes were two small I found I had no problems with the nozzles of my typical juice bottles.

The airflow adjustment feels decent and is not too stiff or too loose. That particular section of the tank also has engraved logos so you can see if you have the airflow fully opened up or not. This is useful because the air holes themselves are quite small and it can be a little tricky to see.

The glass feels solid and spare glass is included in the package should an accident occur. The drip tip and chimney both have an internal rifling style which we saw on the Goliath V2 which is apparently designed to create vortex like vape conditions. The drip is nice and makes for a wobble free fit. I had no problems fitting my other drip tips to this tank.

The way the deck fits is quite unique and it actually plugs into place being held on by a single O-ring. In addition it features two notches that line up with two cut out sections in the main tank. It is advisable to lubricate the O-ring to make for the best possible fit. I don’t think this is a bad system at all and in actual practice it works quite well allowing easy access to the deck without draining the tank.

The deck itself is quite small which will make it something of a pain for rebuildable newcomers. To be honest I even found it a bit too fiddly for my hands. I guess if you are used to other Youde products such as the Goblin and Goliath it will be less of an issue for you. In the case of this particular deck it uses a two post design but keep in mind it is nothing like a Velocity style one since it only has one hole per post. The Philips head screws are decent enough but I found them to be rather small so do take care not to lose them when unscrewing.

Unlike the Goblin and Goliath V2 the Bellus does not have bottom airflow and instead the air hits the coils from the side like a typical Cyclops style RDA. There is one small recessed hole in the deck but this is only needed when using the single coil adapter that plugs into it. Make sure you hear the deck click into place so you don’t get any leaks. The post holes are probably sufficient to fit dual 26AWG coils in there but I think you would struggle with thicker wire. 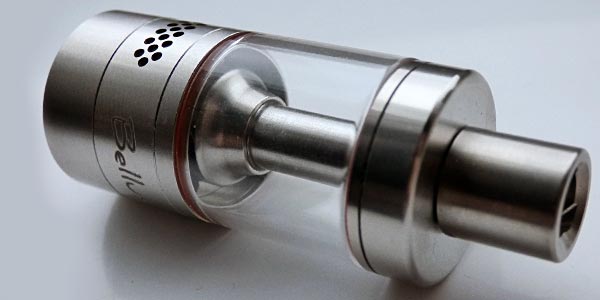 The Bellus has plenty of airflow featuring thirty two small holes, sixteen per side. The airflow can be adjusted from a full on lung inhale to a more traditional mouth to lung vape if set to a quarter open. 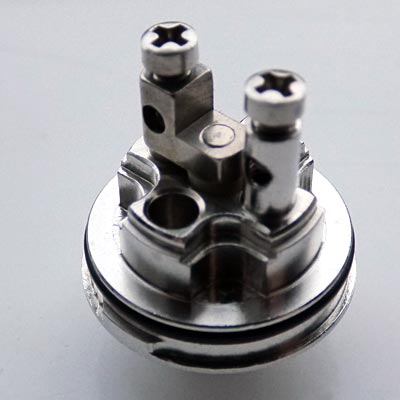 I made a dual coil build using 28AWG (0.32mm) Kanthal. Six wraps apiece wrapped around a 2mm drill bit. My final resistance was 0.5ohm. The build itself wasn’t particularly fun because the post holes aren’t exactly huge and the design of the deck means you won’t get large coils in there. I would suggest you make your coils no larger than 2.5mm internal diameter. I have had problems with my coils shorting in Youde products before so I purposefully went for 2mm internal diameter.

I wicked the coils with Cotton Bacon and I must point out that wicking this tank is not that straightforward. If you put too much cotton in there you will get dry hits, too little and it will leak like a sieve. I did watch a few builds on YouTube because I had read numerous accounts of people having leaking issues. The trick is to just make sure you have the cotton going about 1/3 of the way down the channel without overly stuffing it.

How does the Yoube Bellus vape? 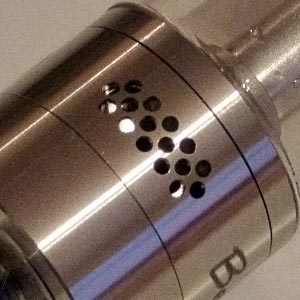 I seem to have become something of an addict to Dripworx e-liquid of late so on this occasion I used Teatime which is a really lovely and tasty juice. After having already primed the coils and filled up the tank I started vaping at 35W using my iPV4s.

The first thing that is really noticeable about the Bellus is the draw which is one of the smoothest I have come across in fact I would say it was actually one of the best. The drip tip and chimney rifling really do the job and with high VG juice this tank does put out a considerable amount of vapour.

The vape was nice and warm and combined with the smooth draw and generous cloud production I found it to be a very enjoyable one! Flavour is very good and not too far off typical dripper quality. Having those coils so close to the airflow really does help.

What was really nice about this tank is the fact that the airflow can be adjusted to a more restrictive vape and by doing this it helped to boost flavour somewhat. I set the airflow to one third open and increased to 40W which resulted in slightly more flavour, once again the draw was exceedingly smooth. At his wattage I did start to get dry hits when chain vaping so I reduced it to 38W which seemed to be the sweet spot for me.

I have left this tank half full for two nights running and I have not had any leaking issues. I know quite a few people have mentioned leaking on the forum but honestly I think the issue is entirely down to how you wick it. It isn’t as easy to get right as other tanks and this tends to create the potential for problems. Another possible cause of these issues could be due to not fitting the deck completely into place.

I will be the first to say that I don’t always get on with Youde products even though I do respect the fact that they are typically well made. We all have different vaping tastes so perhaps that is why I have never got on with atomizers such as the Goliath V2 but in the case of the Bellus I really do like this tank!

Of course there are some things I don’t like namely the rather tiny deck which is a bit awkward for my hands and the fact that you have to get the wicking perfectly right. Another downside is that I personally feel a single coil build doesn’t really do this tank justice but it is nice that Youde have at least allowed you that option.

In my opinion these issues make this tank far less approachable and I wouldn’t recommend it to people who are new to rebuilding. It is a shame this is the case because the Bellus has a lot of positive points in its favour. The vape itself is great and it has a beautifully smooth draw. Flavour is very good and cloud production is great! When you factor in that it is also top filling, has a massive 5ml capacity and has a very variable airflow that will suit most users I feel the good points easily outweigh the negative ones.

I think that if you can live with the fact that it isn’t as convenient to build as others and if you have had some experience with dual coil tanks then this is a very worthwhile purchase since it offers a highly enjoyable vape! 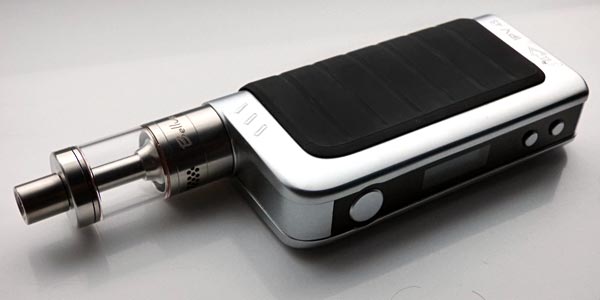