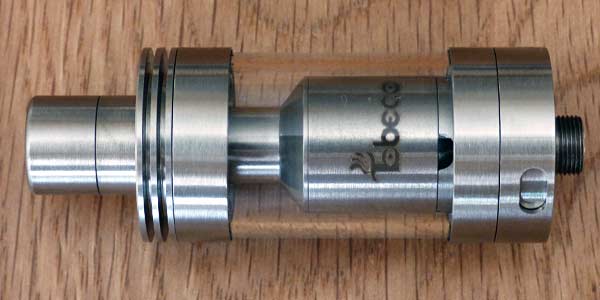 The standard Super Tank uses replacement coils, as does the Super Tank Mini whereas the Super Tank RDA is a rebuildable dual coil only atomizer. Despite the fact that it uses “RDA” in the name rest assured this is not a Rebuildable Dripping Atomizer in any shape or form.

It could possibly be an error on Tobeco’s part or it might refer to the fact that this tank’s deck is very much like a typical dripper albeit one with bottom airflow. 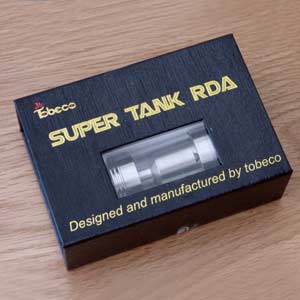 In terms of actual looks I don’t see anything about this tank to dislike. It is pleasingly streamlined and on the whole it seems very well made.

The tank glass isn’t the thickest I have come across but it feels durable enough. The drip tip fits without issues and is wobble free. It is also insulated with delrin to keep heat to an acceptable level when vaping at high wattage. All the other drip tips I tried from my collection fitted this tank.

The deck itself features a four post design and this makes it far more convenient to put a dual coil build in it than some other RTA’s. The Philips screws are actually very good and I had no issues with them trapping or cutting the wire.

The post holes are large enough for most typical builds but I did find you have to back out the screws a lot to get the wire in. I am always wary of loosening tiny screws too far in case I drop them and can never find the things again. The deck itself reminds me a lot of Youde’s offerings and also EHPro’s Billow V2.

The deck has very large juice channels and thankfully due to that it makes it very easy to wick. There is also a slight recessed ledge in the channel that helps you with wick placement.

The chamber and chimney are very reminiscent of a Kayfun in many ways and it feels a bit like this tank is the offspring of a Kayfun and a Billow V2 that has been brought up by Uncle Goblin and Auntie Goliath.

Tank capacity is very large considering this atomizer can hold approximately 6.5-7.0ml of juice. Of course whether or not you can get it to fill with that amount is another question entirely, I’ll get back to that subject later.

The airflow slots are quite large but not particularly wide. I would say they were of a similar size to the Cthulhu RTA. Airflow adjustment is something of a pain since the adjustment ring is very stiff and it is probably due to a very thick O-ring. The downside of this is you can’t really adjust the airflow when you have it on your mod which is a real negative for me.

This tank wasn’t the easiest build for me since I kind of loathe dual coil RTA’s. I am very much all fingers and thumbs and a lot of these tanks have tiny little decks that I find 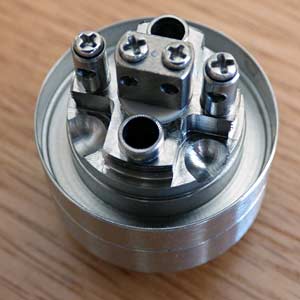 awkward to work with. My first mistake with this one was using 24 AWG wire and making the coils too large with a 3mm internal diameter. This made it tricky to get the top of the chimney on and was just going to lead to inevitable shorts. I suspect far more skilful people than me can make it work with 3mm but I couldn’t and to be honest I didn’t have the patience.

So I ripped that build out and went back and put in a 28 AWG build with the coils now having a 2mm internal diameter. This turned out much easier and thankfully the screws in this tank are good so I had no problems with wire being cut.

Wicking was also very straightforward thanks to the ledge cut into the juice channels. I wicked with cotton bacon and after applying some juice I positioned the wick with a flat ended screwdriver so it was resting against the ledge. I applied a little more juice to make sure the wick wasn’t going to move anywhere and then I started to screw on the chamber and the chimney top.

Sadly I made a schoolboy error in positioning the coils to high and I could feel them starting to catch on the chimney top so I took my ceramic tweezers and pressed them down a little so they were sitting just a few millimetres above the air holes.

With no further issues at this point I then screwed the tank back together. The final resistance of my build was 0.8 Ohm.

Houston we have another problem

Up to this stage everything that had previously gone wrong was down to user error but when it came to filling this tank I really started to get irritated.

I closed off the airflow suspecting that it would no doubt leak on me if I left it open. I then unscrewed the top cap and put the nozzle of my juice bottle in the fill hole. I then filled it to capacity and screwed the top back on.

At this point the tank which had pretty much behaved itself now decided that in the sheer anticipation of getting ready to be vaped it would proceed to wet itself. In other works it leaked and I mean really leaked. Within seconds the iPV4S was covered in streams of e-juice and I had to get the kitchen towels to mop up the mess. How it managed to leak this much with the airflow fully closed down I will never know.

I suspected the problem was that the tank glass itself needs to be screwed on seriously tight. So after cleaning everything up I then made sure it was extremely secure. Once more with the airflow closed down I filled the tank and everything seemed okay until it started leaking again this time it did it all over my Sigelei 150W TC. Definitely there was a pattern forming here and I must say that in future I’m going to start testing tanks I suspect are leak prone on really cheap mods because I will no doubt wreck my expensive ones before long.

To be fair it is entirely possible I simply need more wick in there because the Super Tank RDA seems to go through phases and can behave itself but at other times I only have to look at it funny and it starts leaking.

Due to the quality of vape I get from this tank I am not going to give up on it and when I have more time available to experiment with it I will see if it’s really a constant problem. If I find I can get it to work without it leaking on me then I will update this review accordingly.

It seemed I wasn't the only one with leaking problems and thanks to comments from aksarben a solution has been found. The real trick to getting this tank to work right is too use a generous amount of cotton. You need to have the wick running down the juice channels but be careful not to have any wick right at the bottom where the juice holes to the chimney are located. If you put any cotton down there this tank will leak like a sieve on you. It will take a bit of experimentation if you don't get it right first time so I advise you to not put your favourite juice in there until you know the tank is not going to leak.

I know the problem is definitely at an end because once I had rewicked correctly I left the tank for 24 hours and it has not leaked at all.

Well I’ve given it away in the previous paragraph but honestly this tank offers a really nice vape. Due to the leaking issue I have been reluctant to fill it further than one third capacity and I absolutely will not put expensive e-juice in it for the time being.

I filled the tank with some leftover Apollo Classic Tobacco Menthol that I had recently reviewed. In terms of flavour this tank is seriously nice and I got a really strong menthol taste while getting a very pleasant base tobacco flavour. I seemed to get a very good throat hit using the juice in this particular tank.

In terms of the draw I find it one of the nicest I have tried. Fully opened up I seemed to get no loss of flavour and I would say it seemed quite an intense vape which really suited me since I prefer flavours to have some potency.

Vapour production is very good but it will depend heavily on your build. Remember I was only using 28AWG at 0.8 Ohm and vaping at 25W. The clouds produced were more than acceptable to me.

At 25W it was never going to be a hot vape but I did find it a very enjoyable one. If you are one of those people that enjoys a very warm vape then the tank offers the flexibility to put whatever build (within reason) you want in it to achieve that. 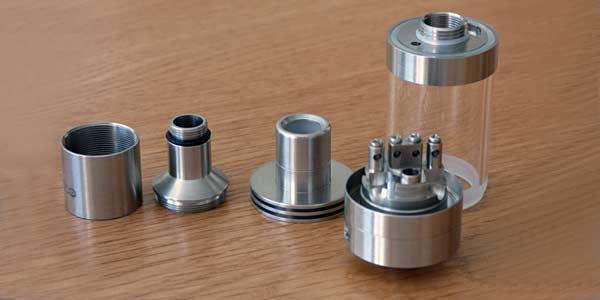 In terms of overall construction, flavour, cloud production and vape experience this is a lovely tank but unfortunately I can see it being missed by people due to the lack of coverage. I have one minor gripe and that is the fact that the airflow adjustment is very stiff and it isn’t practical to adjust it when the tank is fitted to the mod. It is possible that swapping out the O-ring may fix that issue.

This tank does not have a leaking issue as previously mentioned but it does need to be wicked correctly or you will run into problems. You might not get the correct method the first time but once you get it right this tank works extremely well.