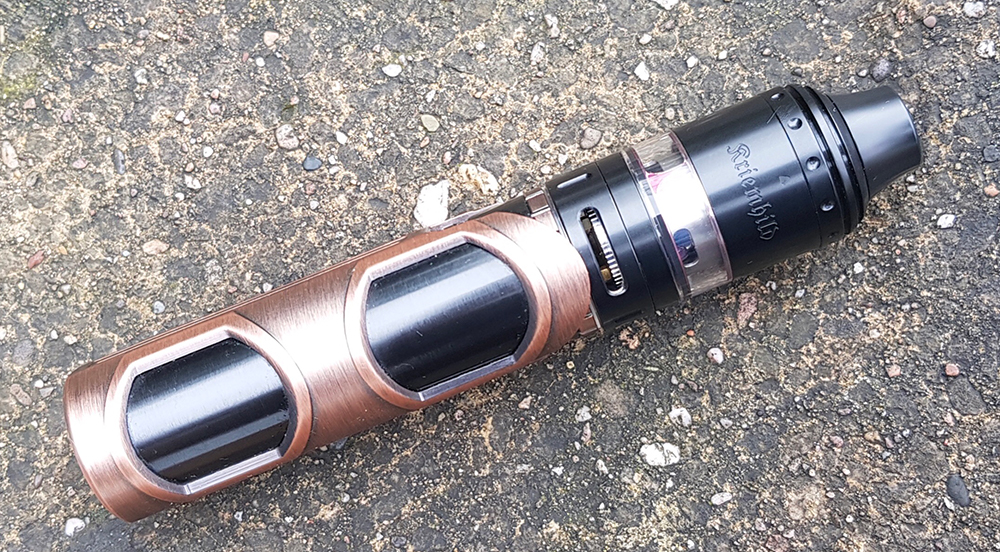 Vapefly have sent over their latest collaboration with the German 103 team who seem to like naming their products after major figures from germanic heroic legend and literature, and their latest offering the Kriemhild sub-ohm tank is no exception and, as they have done with their previous releases, a small amount of the purchase price ($0.25) goes to charity. 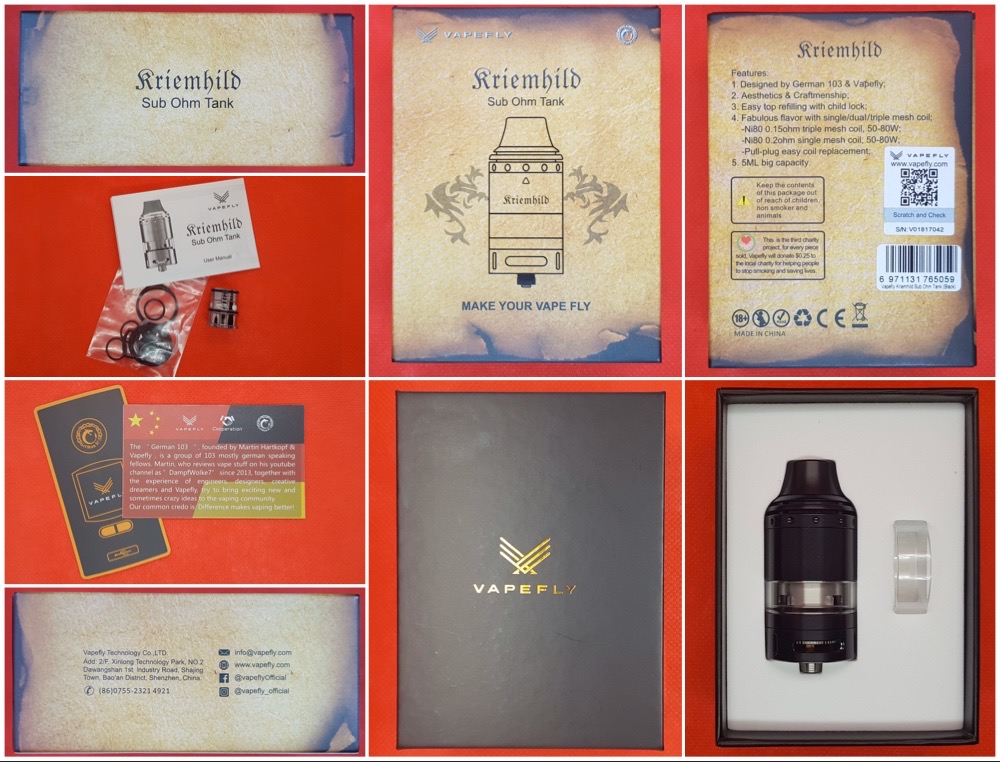 The box comes in an outer sleeve with a picture of the Kriemhild tank on the front, social media links on the side, and a list of contents along with a scratch’n’sniff authentication code on the back. The colour of your tank is also listed here on on small sticker with writing so small it’s barely legible and easily missed. I was initially left guessing which colour had been sent out to review until I opened the box. Inside this sleeve is the main box with a prominent vapefly logo in gold and two security seals around the back which you have to break before opening. There are finger cutouts on the side of the lid which makes lifting it easy. Once this is done, you are presented with a German103 card and a second card explaining how to enter an Instagram competition to win the Kriemhild mod. Under these, you finally reach the Kriemhild tank with a pre-installed coil and spare glass. Finally on the bottom layer is a second coil, a baggy of spare o-rings/seals and a Kriemhild instruction manual.

The Germans are known for their love of tall, high capacity tanks, and the Kriemhild is no exception at 55.5mm height and a whopping 5ml capacity. This is clearly not TPD compliant which means it may not be widely available in those markets, but I’m sure you all know ways and means around those restrictions if you want to seek this out to try for yourself. The tank breaks down into four sections (five if you include the drip tip), the 510 base/afc, lower tank section/chimney, glass, and upper tank section/fill port. 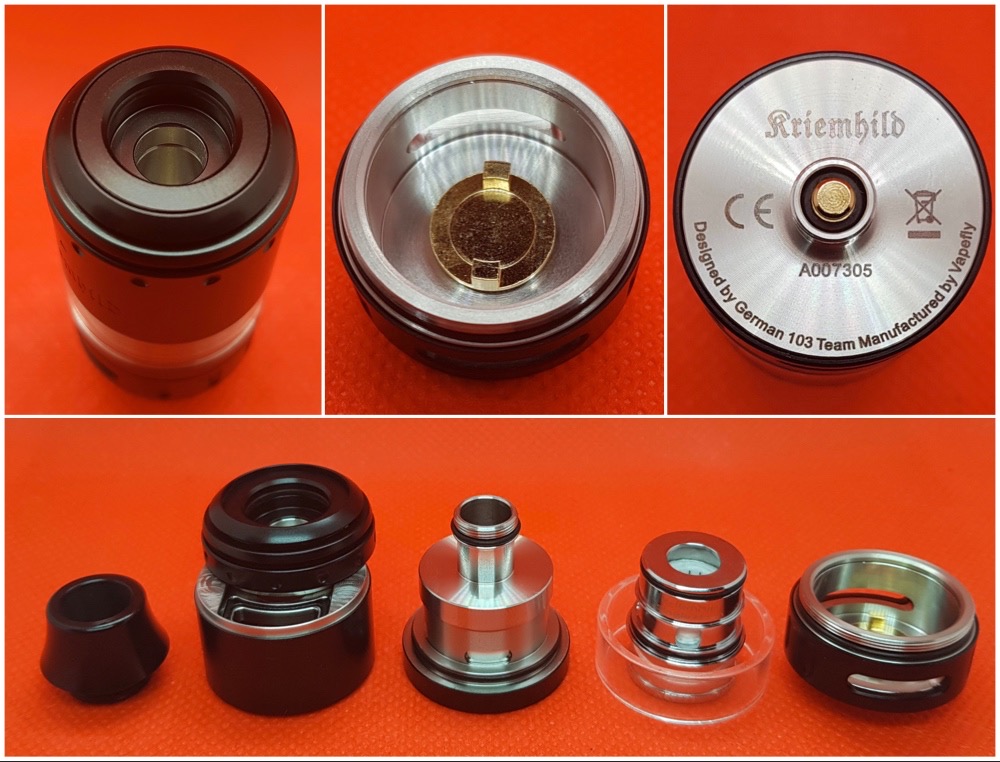 The supplied delrin 810 drip tip is double o-ringed but the 810 catch cup also has an o-ring as well so all your 810 drip tips should fit in here with no problems. I tried several from my collection and had no issues with any of them. Initially I wasn’t sure I was going to like the included drip tip, but it’s surprisingly comfy in use so I’ve continued to use that.

The child lock fill cap is opened by locating the fill arrow just above the Kriemhild logo, pulling up on the spring loaded top section and then sliding the top back to reveal the very large fill port. I was worried that this design might foul on some drip tips as the outer ring lifts up around the drip tip itself, but this proved to be unfounded as every one I tried worked just fine so unless you have an unusually wide drip tip, it shouldn’t present any problems. I’m not sure this would actually frustrate a child for that long though as, although you can’t push the top open without lifting the cap and it doesn’t unscrew, I’m sure once they figured out that you could pull the top cap up, they’d have it figured out pretty quickly and there’s no actual locking mechanism. “Child lock”, probably not, “Child frustrating”, maybe…  I don’t have any small children to hand to test this theory out though. One big plus point to this design, of course, is that it won’t easily slide open in your pocket like a lot of other push to fill systems, and I think this is a superb design.

The fill port is massive, and you shouldn’t experience any problems with air locks and the resulting mess, but the fact that the top two thirds of the tank is metal means you can’t actually see what’s going on without peering down the hole to see when the tank is full. Any spillage is purely user error though, so pay attention! You can just about use a 120ml chubby gorilla bottle without resorting to removing the drip tip as well, smaller bottles present no difficulties at all and the 5ml capacity means you won’t be filling up every five minutes either. 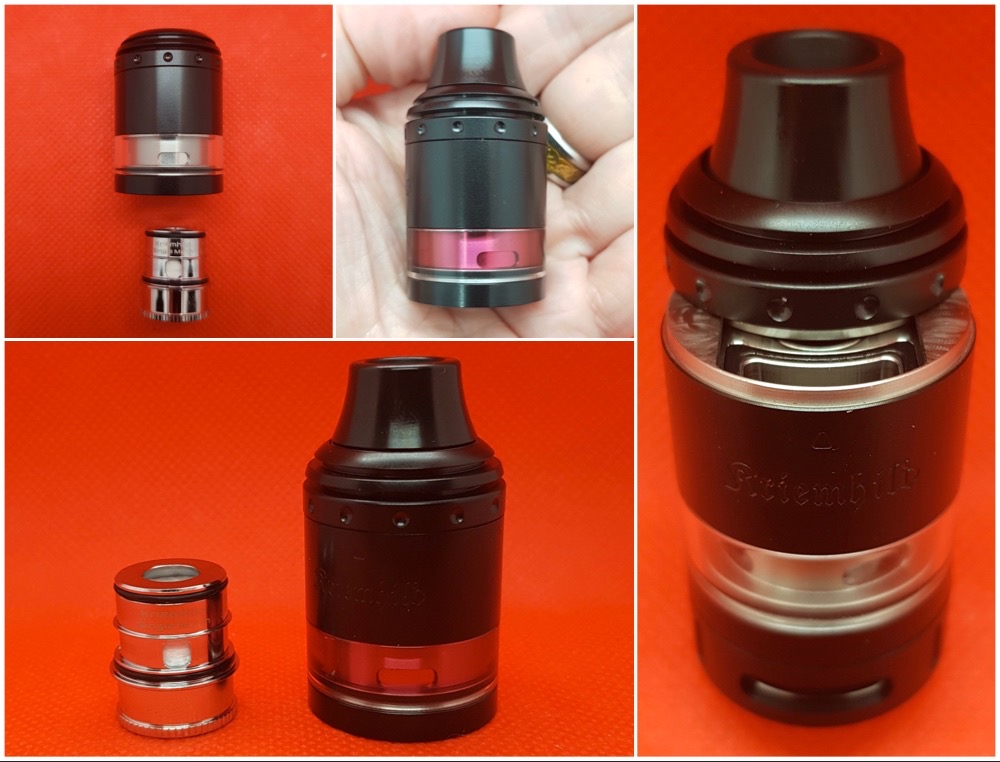 Coils are of a modern press fit design and removing the included coil reveals another of the Kriemhild’s party tricks. The inner chamber has a spring loaded section which closes off the juice flow holes when you remove the coil. As you can see in the photo above, I have a full tank of e-liquid with no leaks! This is great as it means you can access the coil anytime without losing any e-liquid. Vapefly and the German 103 team have certainly put a lot of clever design features in here.

The airflow control on the base has two large cyclops ports with stops at the fully open and fully closed positions. As is common with most modern tanks, there’s more airflow than you will ever need and I’ve found myself running the afc at around half open or less. Airflow is surprisingly smooth for a mesh sub-ohm tank with no weird whistles at any setting.

Both the included coils are Ni80 (nichrome) so this is something to bear in mind if you have any metal sensitivities. If this applies to you, a dual core coil is also available and this is KA1 (Kanthal), but sadly one isn’t included in the box to test. Big plus points to Vapefly for actually stating the coil material not only on their website, but on the coils themselves. Strangely, the manual doesn’t state the coil material for the optional dual coil and I wonder if this was perhaps undecided at the time of printing? 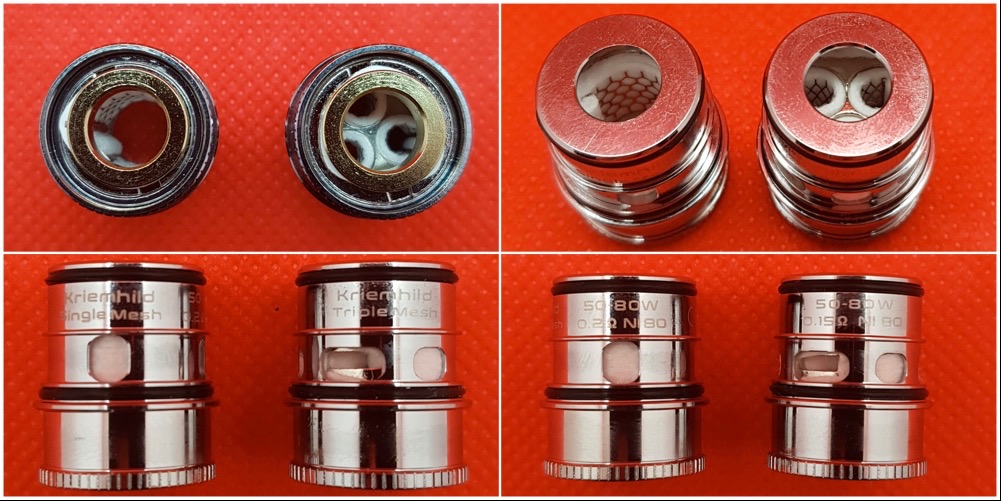 Two coils are included in the box, a 0.2Ω single mesh coil and a 0.15Ω triple mesh coil with a honeycomb mesh design. Both are rated for 50 to 80 watts. Both coils really needed around 60 watts before they really started to get going, and operated best in the 70 watt plus range, although I felt I couldn’t push the triple mesh coil as much as the single mesh, with the former starting to struggle a little past 75 watts. Both produced good flavour reproduction, with the triple mesh coil perhaps having a little more restriction, but in truth there wasn’t much to choose between them so pick your favourite and stick with that for future purchases. The coil heads are quite large with generous wicking ports, so wicking hasn’t been an issue with either coil.

Vapefly and the German 103 team team have packed a lot of clever features into this sub ohm tank, like the clever top fill system and the ability to swap coils without draining the tank. Whilst it’s tall, it doesn’t feel ridiculously so and I know those of you who despise bubble tanks will love this for its clean, uncluttered lines along with the 5ml capacity. The coils have been solid performers, and the smooth airflow means you won’t feel like you’re vaping on a kazoo. There’s much to recommend here and if you’re a fan of sub ohm stock coilers then this is definitely worth seeking out. 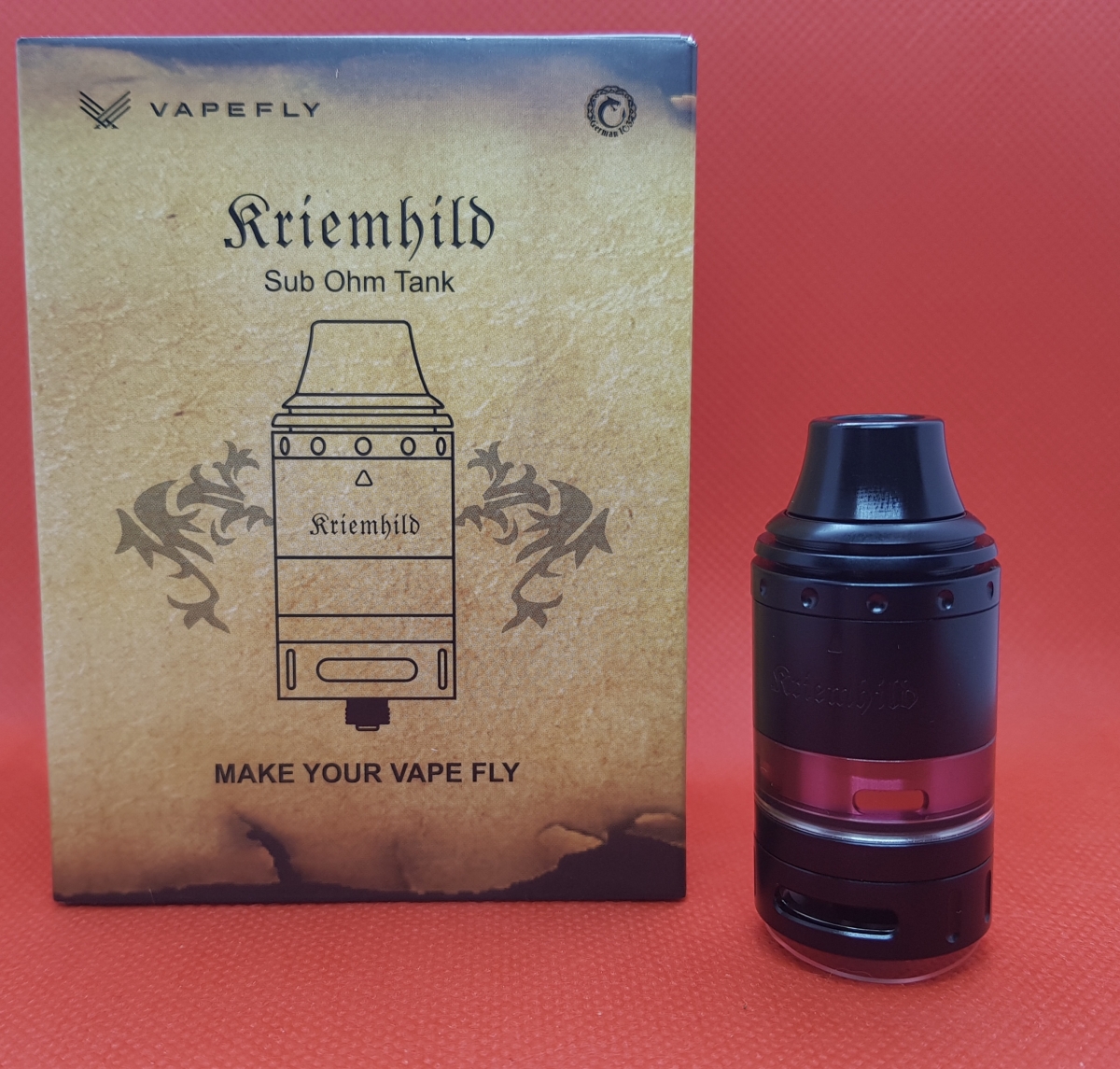