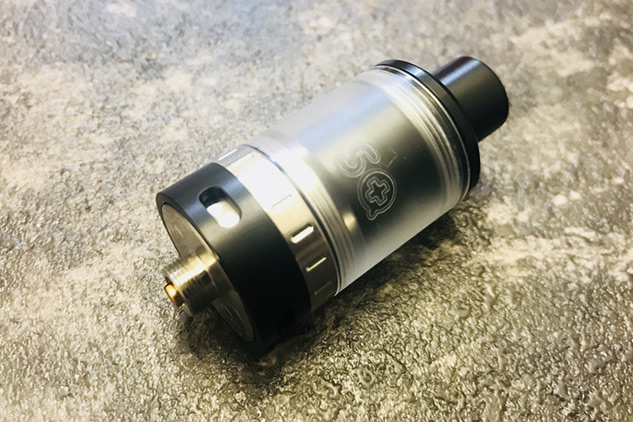 Based out of Switzerland, Stattqualm are a name synonymous with the high end vaping scene, thanks to the successes they have had with their SQuape series of rebuildable atomisers, such as the SQuape R[eloaded] and the SQuape X [dream], which have been a favourite of many users for a long time thanks to their exceptional build quality and the top quality flavour that SQuape tanks provide!

Stattqualm's newest SQuape atomiser is the E[c], which follows on from the SQuape E[motion], and with a retail price of just under £90 in the UK it will be the most affordable SQuape rebuildable tank atomiser to date. The E[c] has been designed as a more affordable and cut down version of the SQuape E[motion], whilst still offering the same level of excellent performance and still manufactured in Switzerland!

The E[c] is available within the EU with a 2ml E-Liquid capacity, and a 5ml capacity outside of the EU. It uses the same decks and base as the E[motion], but has a PMMA tank section and it is bottom filled rather than top filled, and is still aimed at mouth to lung and direct to lung vapers. Non conductive parts are used, notably on the chimney section and the ematalised deck, and there are six different colours available at launch.

I absolutely love the way that Stattqualm package and present their products, in my opinion they set the example of how a high end product should be presented! Despite the lower cost, the SQuape E[c] is packaged the same way as it's predecessor (the E[motion]), and in the box you get the SQuape E[c] tank, the Deck We, a SQuip tip (drip tip), SQuape band, spares package, 1.6mm MTL airflow reducer, SQuape sticker and an instruction manual. Additional accessories such as the Be and De decks, spare PMMA tank sections and the full mouth to lung airflow reducer kit containing 1.3mm, 2mm and 2.5mm reducer pins can be purchased separately, and all accessories can be interchanged between the E[c] and E[motion]. 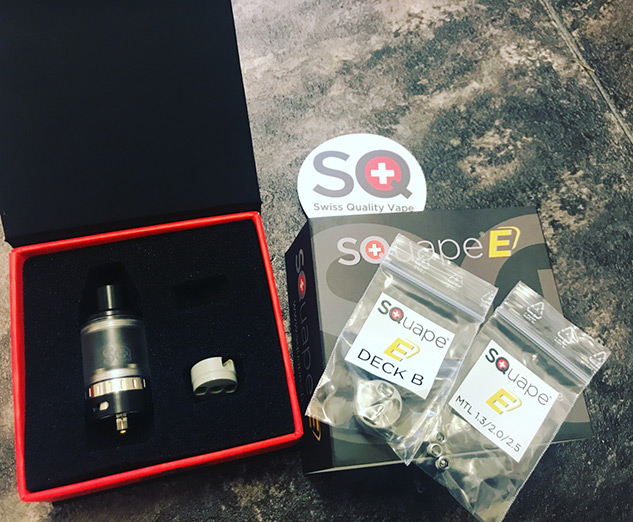 Measuring in with a width of 22mm and height of 36mm (excluding the SQuip Tip and the 510 connector), the 2ml version of the SQuape E[c] is the smallest SQuape RTA to date by some considerable distance! At launch, a 5ml capacity version is also available, sold by vendors in countries unaffected by the TPD, with a 7.8ml extension kit planned for future release.

Six colours are also available at launch, with Black, Red, Blue, Purple, Green and Orange all available, with further colour options planned for release in the near future. Although the SQuape E[c] is marketed as the most affordable SQuape RTA to date, it is still manufactured in Switzerland from very high quality materials, with Stainless Steel 316L used alongside a food safe aluminium anodised chimney section and an ematalised deck which virtually eliminates the risk of short circuits. 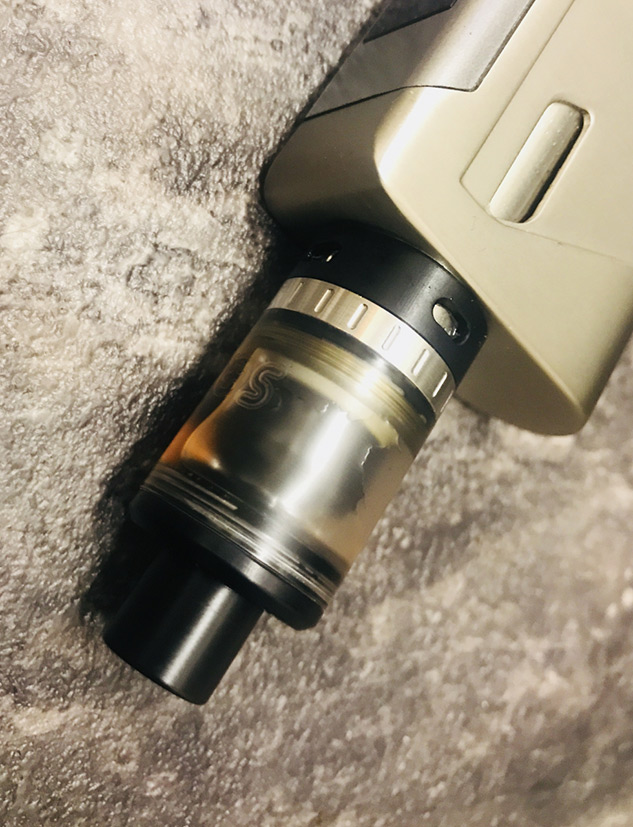 A thermically deburred PMMA tank section is used for the tank section- it is recommended that you do not use known aggressive tank cracking e-liquids with the SQuape E[c] however! The base of the tank features a unique serial number, along with an adjustable Ecobrass gold plated 510 connector, and you’ll find a Delrin drip tip at the top of the tank, which is also known as a SQuip Tip. 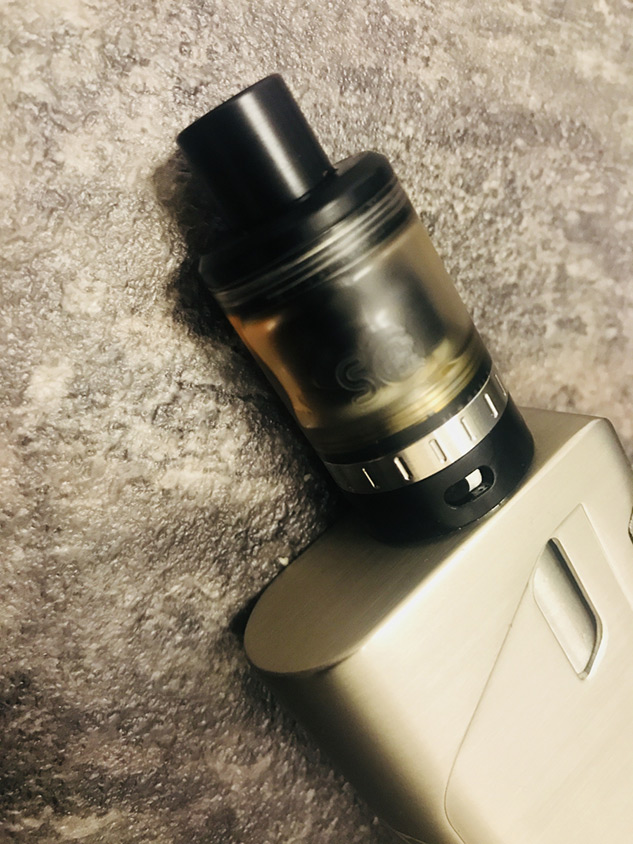 The SQuape E[c] is a bottom filled tank, and it is very easy indeed to refill. Simply unscrew the tank section from the deck, and a small notch is present on the threads of the PMMA tank section. Place the nozzle of your bottle into this and fill until your E-Liquid is level with the chimney. You can also access and adjust your build with E-Liquid still present in the tank. 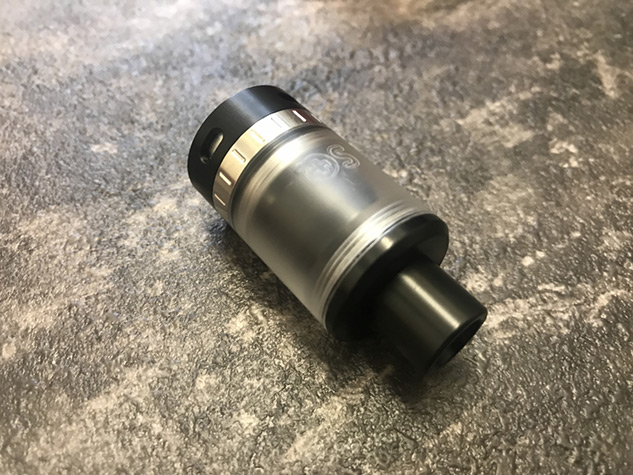 As the SQuape E[c] is a stripped down version of the SQuape E[motion], which is around £45 more expensive than the E[c], the E[c] parts are all interchangable with the E[motion] and vice versa. You can switch in the bases and different decks for example, as exactly the same base is used with both atomisers. In fact, the only real differences between the two is that the SQuape E[c] uses a bottom filling method rather than top filling found on the E[motion], and a PMMA tank section is present on the E[c] rather than a stainless steel and glass one as found on the E[motion]. There’s even the possibility of customising the look of your SQuape E[c] further, as the airflow control ring is removable you can switch different coloured ones in!

Although it is marketed as a stripped down version of the more expensive SQuape E[motion}, overall, the build quality and design of the SQuape E[c] is absolutely exceptional, there wasn’t a single flaw present on my SQuape E[c] unit and it arrived spotlessly clean. Everything fits together as it should, with extremely smooth threading, and the tolerances are virtually perfect. I’ve always found SQuape atomisers to have outstanding build quality, amongst the very best out there, and the SQuape E[c] is no exception! 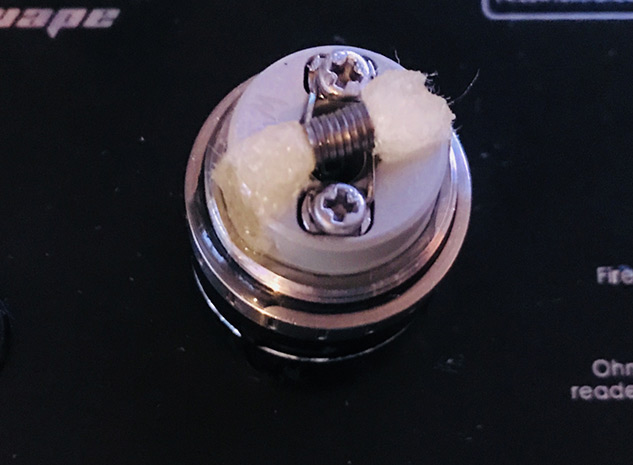 Firstly, as mentioned the W deck comes included with the SQuape E[c], which is also known as the We or Wide deck. This offers a large space to fit a coil up to 3mm in diameter, with a straight wicking channel running across the centre of the deck. Two notches are cut into the end of the deck at either side, which is where you need to place your wick tails. This deck is designed for use with coil builds down to 0.7ohm in resistance, with up to 30W of power used. 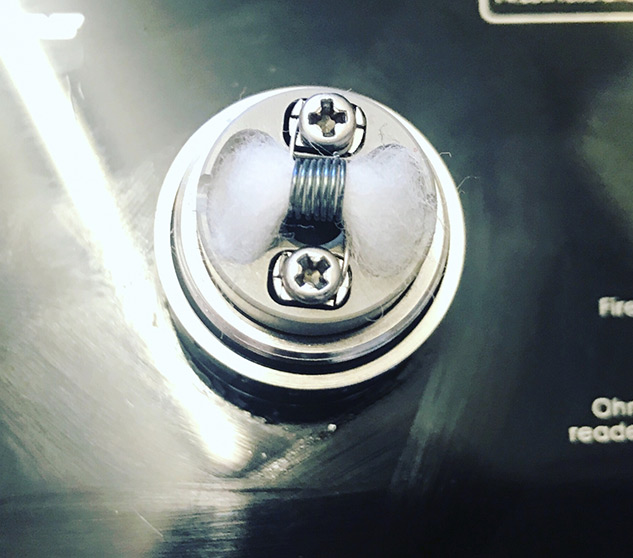 I also received the B (or Be deck), which is designed as a ‘power single coil deck’. This will accept a coil up to 3.5mm in diameter, so you can use lower resistance coils at higher wattage levels. The wicking channels are actually wider than the ones found on the W deck, with wide slots cut out into the sides of the deck enabling it to efficiently wick high VG E-Liquid at high power settings. The B deck was actually my preferred deck, mainly thanks to the ease of wicking it! 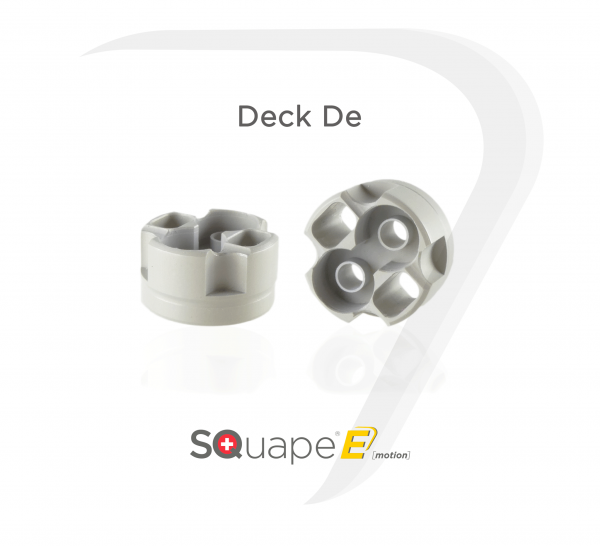 If you prefer to build with dual coils, then the D (or De, Dual) deck is a great option to look at. This has been specifically designed for dual coil builds, with airflow holes hitting the base of your coils and wicking cut outs at each corner. This is designed for those that prefer an airier vape, and as such the mouth to lung reducer pins are not compatible with this deck.

Overall, I’ve found the SQuape E[c] to be a very simple tank to build on, ideal for beginner coil builders and seasoned ones alike. The post screws trap down your coil legs perfectly, even accepting large coil builds, making it quick as well as easy to mount you coil build. As the decks are manufactured from ematalised aluminium, and the chimney is anodised, the risk of short circuits is virtually eliminated, making it a safer tank to build on too! 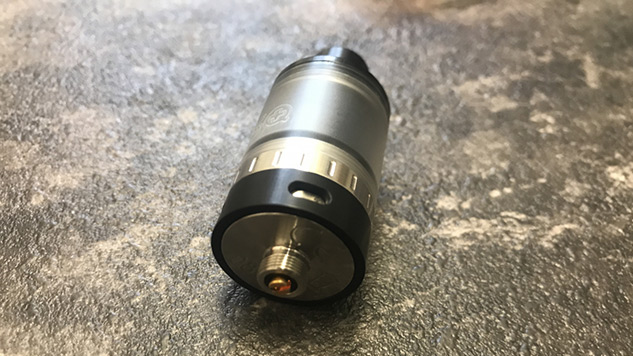 A separate mouth to lung airflow reducer kit is also available to purchase separately, which includes 1.3mm, 2mm and 2.5mm airflow screws allowing you to experiment with different airflow types

SQuape atomisers are renowned for providing some of the best flavour around, the SQuape E[motion] received universal acclaim from reviewers with the exceptional flavour it produced, and I’ve been incredibly impressed with how it’s little brother, the E[c], has performed.

I get a very smooth and quiet vape with the SQuape E[c], that is absolutely chock full of flavour! I’ve been primarily using fairly complex tobacco based E-Liquids in the SQuape E[c], such as Crazy Bobs Nutty Nero, Dripworx RY4 Premium and Indigene Tamahaac, the SQuape E[c] picks up on all the flavour notes present in these E-Liquids and delivers them to my palate perfectly. It really is an exceptional vape! 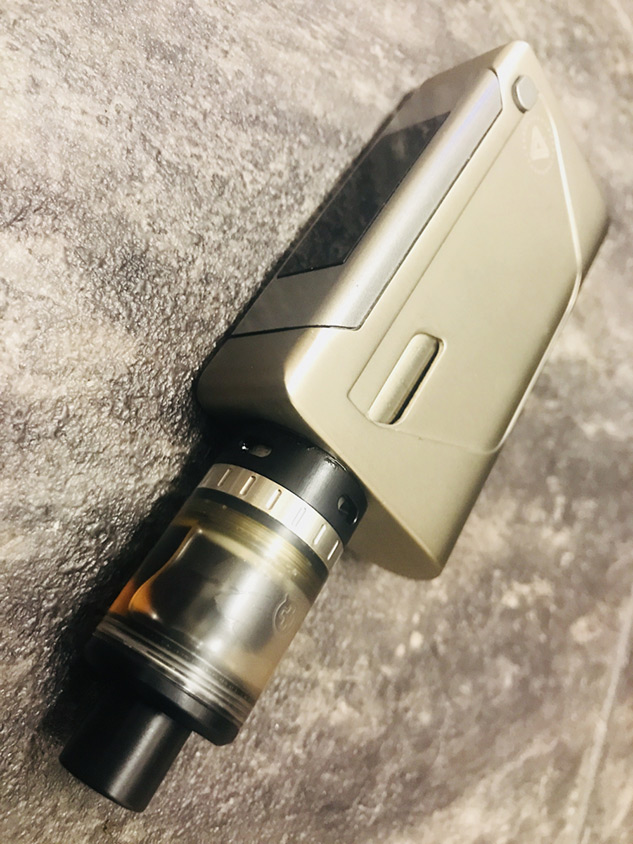 If you use high VG E-Liquids, you won’t run into any issues with these wicking in the SQuape E[c]. I have tested up to 100% VG without running into wicking issues at all, even in the 40-50W range, and the SQuape E[c] stays cool under use at that wattage range. It provides some pretty thick clouds too!

As a side note, I’ve not really noticed a difference in flavour quality between the W and B decks, however the B deck does seem to wick much faster and as a result, it drinks E-Liquid quicker too!

Make no bones about it, even though the SQuape E[c] is a stripped down version of the SQuape E[motion], you aren’t really losing anything by purchasing the cheaper option! The SQuape E[c] is still an incredibly high performance tank, offering some of the absolute best flavour on the market as well as some of the best build quality I have come across on an atomiser.

At £90 in the UK, the SQuape E[c] is actually cheaper than most ‘high-end’ tanks on the market, even £10 cheaper than the Kayfun Prime. If you are looking at investing some money into a new, high quality RTA, then I would strongly recommend picking up the SQuape E[c] as it really is that good!

Personally, having experience of a lot of the high end expensive tanks on the market, I find the SQuape E[c] to be fantastic value for money. For what you pay, you are getting a tank that is built to last, and one that offers dripper level flavour quality. Since I have received it, I haven’t put it down, and it is a tank I wouldn’t hesitate to recommend!

A big thanks goes to Chris at Stattqualm for sending over the SQuape E[c] for review, this can be purchased in the UK here from Creme de Vape or from the Stattqualm SQuape store directly here. Additional accessories such as spare PMMA tanks and additional decks can also be purchased from both stores. 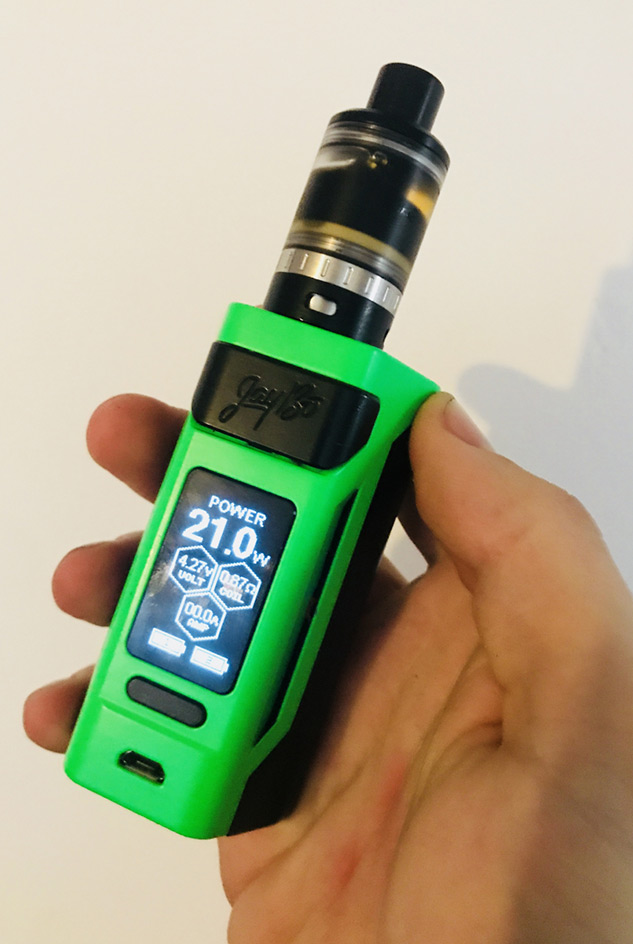