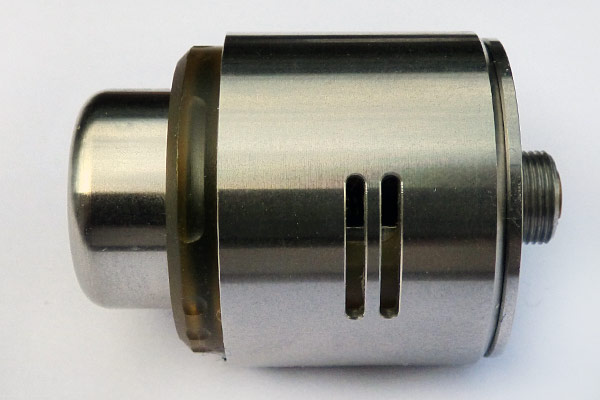 Star Wars and dripper fans rejoice because the latest release from well-known Chinese manufacturer Youde is the Skywalker RDA! This 24mm diameter dripper features a two post design and a 4mm deep drip well. In addition it comes with a heat resistant Ultem top cap and can be set up to suit single or dual coil builds. What’s more for the squonking fans out there Youde also include a bottom feeder pin in the box!

So let’s take a detailed look young Padawans and see exactly what this RDA has to offer!

The Skywalker RDA is made from Stainless Steel and it is a hefty atomizer which feels very solid and durable. All of the individual parts are nicely machined and fit together well. This RDA is 24mm in diameter so it should look good on most mods but may overhang slightly on more compact devices. It is a relatively low profile RDA and stands only 29.5mm in height.

Uniquely the top cap is actually made from PEI (Ultem) which is very heat resistant and this also serves as the Skywalker’s airflow controller which caters to both single and dual coil builds. In many ways the airflow controller reminds me of the one on my CSMNT RDA.

The barrel of the RDA features two horizontal airflow slots on each side which kind of look like vents. In addition the barrel also features a nicely engraved logo and the name “Skywalker RDA” beneath it. Now due to some branding issues the logo is being revised so we can’t actually show any pictures of it until we receive the new model (think Rebel Alliance style symbol and crossed lightsabers and you will quickly get the idea why).

Update: Having now received the new revised model today I can't honestly see any major differences. If anything has changed it is the "Skywalker" font because the logo looks exactly the same to me and yes it still has crossed lightsabers and a Rebel Alliance style symbol so one would assume that it has flown under Disney's radar. The packaging is exactly the same and still features exactly the same logo that the ealier one I recieved has.

The deck is very reminiscent of the one from the Skill RDA and features a two post design with 3mm wide vertically slotted flathead grub screws. When fully opened up they offer a huge amount of space for whatever wild build you have in mind! The juice well is 4mm deep which is more than sufficient for most users. Finally the 510 pin in the base is gold plated which will ensure you get excellent conductivity. 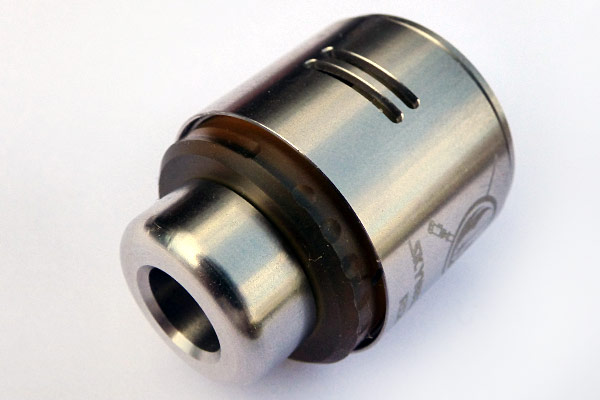 The Ultem top cap/airflow controller can be a bit problematic initially and you may need to soak it in some warm soapy water before putting the marigold rubber gloves on (not really something Luke Skywalker would wear) just so you can grip the thing to prise it loose. Once you have removed it make sure to lubricate it well before replacing it then it should turn freely.

The airflow controller can be set up for either dual coil or single coil configuration. At its most open the airflow offers an ever so slightly restricted direct lung inhale and this becomes more restrictive as you close it down but never to the point where I feel it would really suit a mouth to lung vaper. 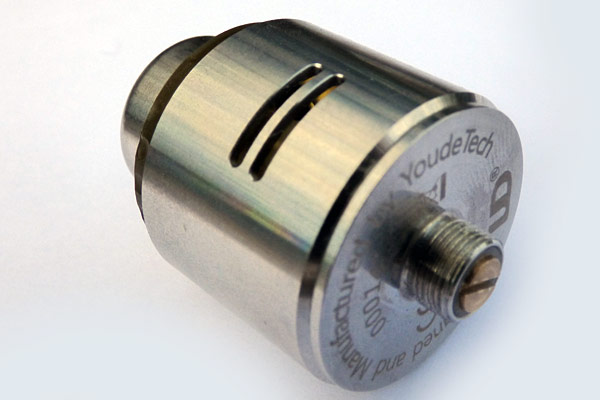 Setting up a build in this RDA is an absolute breeze. The two flathead grub screws work well and hold the wire very securely without cutting it. All you need to do is loosen the screws and slot you coil legs in before tightening down. You can either cut the legs for each coil as you position it or leave them until you have both completely held in. You will need to straighten up your coils a little after tightening down to get them exactly how you want them.

Filling is simple and you can either remove the top cap or just drip through the drip tip. 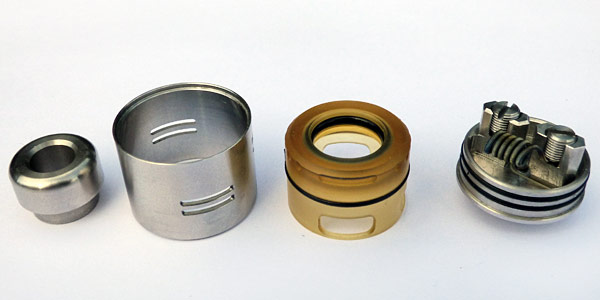 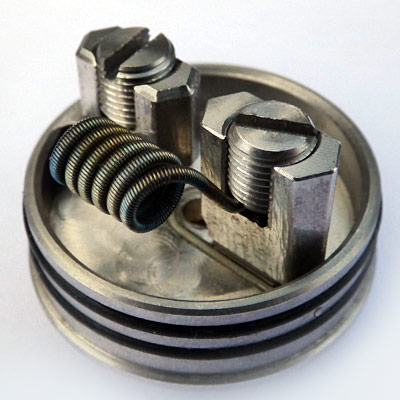 I decided not to make use of the included Clapton coils in the box since I already had some to hand. I set up a dual coil build which was very simple to do and I wicked both coils with Japanese cotton. The final Resistance of this build was 0.28ohm.

I primed the coils and filled up the well with some E-Liquid Cartel La Volta which is a delicious raspberry ripple ice cream flavour. Taking my first vape at 60 Watts it was certainly a very warm vape just how I happen to like it. Now the flavour was good and definitely above average but not as flavoursome as what you would get from a similar style of RDA such as the CSMNT but then that does cost twice as much as this particular dripper so it is a pretty unfair comparison. Personally I think most people will be satisfied with the Skywalker’s flavour unless you are extremely picky when it comes to RDA’s and exclusively stick to dedicated flavour chasers such as the Snapdragon, Hadaly or the O-Atty.

One thing the Skywalker does well is vapour production and it really puts out some very generous dense plumes which will quickly fog up your room if you start chain vaping!

Even though the top cap is made from Ultem the Skywalker does get very hot and I personally felt a low Resistance build when using the Stainless Steel drip tip was too much for me so I swapped it out for the CSMNT’s Ultem drip tip which definitely improved things. As far as the draw goes it does have a slight amount of restriction even when fully opened up and I think that is really due to the airflow being split between two vent like slots on each side but it was certainly airy enough for a Kennedy fan like myself to enjoy!

I never felt the need to close down the airflow because I actually preferred it wide open and in some respects the Skywalker does vape similar to both the Goon and the CSMNT. In some ways the Skywalker feels like the child of those two drippers to me and even though both of those might seem a bit more impressive in terms of overall flavour the Skywalker is still very enjoyable!

I moved on to trying out a single coil build and fitted a 0.7ohm Fused Clapton coil. The Ultem airflow controller was an absolute pain to loosen so I could adjust the airflow accordingly but I succeeded in the end. As far as the vape goes the single coil option certainly isn’t bad at all (was using Manabush Omusa this time) but nowhere near as good as a dual coil build which you kind of expect to be honest. On the plus side of things it would be very easy for a rebuildable newcomer to set up so they could start with that and gradually move on to dual coils when they are ready. 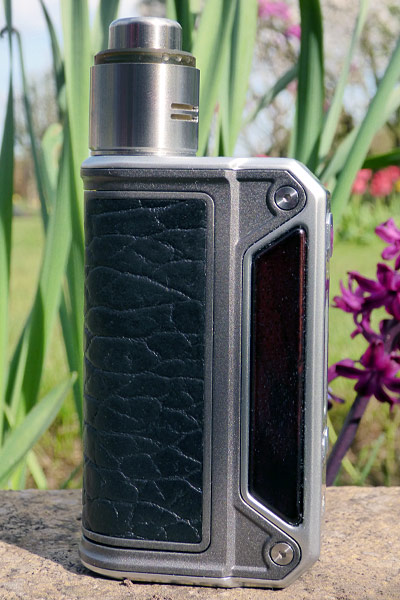 I have to admit this RDA really impressed me because while there are aspects that I can definitely recognise from other RDA’s Youde have still made the Skywalker very unique. The overall quality of the construction is superb and everything fits together extremely well!

What does let things down a little is the Ultem top cap/airflow controller which is very difficult to adjust when the product is brand new but does get better once you actually manage to remove it and lube it up. Another consideration is when using low Resistance builds (below 0.3ohm) things can get very hot and the Ultem top cap only helps to offset this problem a little and I feel it might have been a good idea if Youde had added a couple of heat sink fins. Of course providing you use an Ultem or Delrin drip tip or stick to builds of 0.5ohm and above this is far less of an issue.

In terms of approachability for rebuildable newcomers the Skywalker is so incredibly straightforward and you can coil and wick it faster than a Velocity style deck. Also since you can set up this RDA with a single coil it makes it an absolute doddle for a newcomer to use!

The Skywalker RDA offers great flavour with excellent dense cloud production and since the well is reasonably deep you don’t feel like you are constantly re-dripping and even so you can always drip through the drip tip. Despite all its positive points the biggest draw of the Skywalker RDA is undoubtedly the price and it currently sells at $28. For an RDA of this quality that represents an absolute bargain so it would be well worth picking one up!

While it certainly won’t turn you into a Jedi Knight (only Yoda can do that) the Skywalker RDA offers a very solid vape experience that won’t disappoint at a highly attractive price! Many thanks to Youde who kindly sent this RDA to Planet of the Vapes for us to review. Youde have also sent us an extra Skywalker RDA to give away to one lucky winner. For your chance to win this great prize please see our competition.