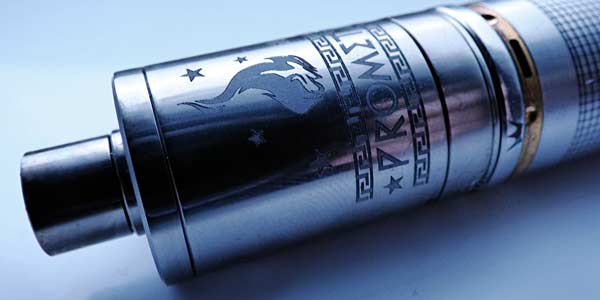 The Prometey III is a Rebuildable Tank Atomizer made by Ukrainian manufacturer Titanium Mods. It is different from a lot of other tanks in the sense that it uses synthetic filler material to hold the juice much like a GP Spheroid. Due to its titanium construction it is resistant to wear and scratches and is also incredibly light. Keep in mind that this RTA is designed to offer a very strong throat hit with excellent nicotine delivery. The Prometey III can be set up with whatever wick type you choose, cotton, silica or even mesh.

Please note that this RTA was purchased by myself and I did not receive it free for review.

In actual fact it doesn’t come in a box but is instead well packaged in a foam tube. Delivery from Ukraine to the UK takes about seven to ten days. The spares pack contains everything you could ever need including O-rings, screws, spacing washers for the 510 pin and a replacement pin. Keep in mind that the spares pack is a separate purchase that costs €5. Considering the distance involved it is a wise idea to pick up a spares pack if you order this. 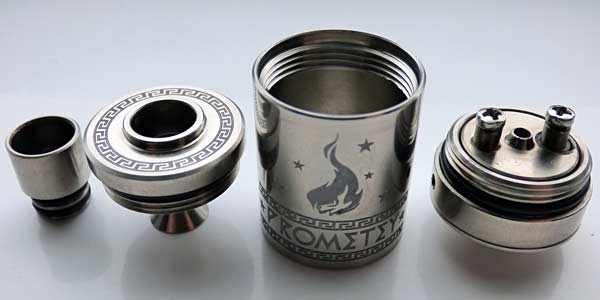 The Prometey is now in its third iteration and it features many changes.

I must admit I was in love with the Prometey tanks when I first saw them but due to the small production runs (meaning it is often out of stock) it has taken me a while to finally get my hands on one. The workmanship of this atomizer is exquisite and the engravings are flawless. The engraving looks heavy in photographs but it is quite subtle when you see it up close. Once again despite this being a Ukrainian product there is a noticeable Greek theme present. I assume Aleksandr who makes these atomizers is something of a Classical Greek fan, fortunately so am I so it appeals to me a lot! I guess I grew up watching Clash of the Titans and Jason and the Argonauts far too many times and I am interested in Ancient History so anything that features that Classical style I am easily tempted to get.

Prometey as far as I know means Prometheus who was of course the Greek God who gave mankind the secret of fire and was punished for his transgression by being chained to a rock and having his liver eaten out by an eagle, only to be brought back to life the next day to suffer all over again. Greek myth is full of grim stories like that!

The main engraving features a single flame that is surrounded by five stars. Beneath that are two horizontal Greek key patterns with the words “Prometey” engraved between them. I think that it looks seriously awesome but then I love that kind of thing.

On the top cap there is a beautifully engraved circular Greek key pattern. The base features the words “Made in Ukraine” and also shows the serial number which is flanked by two stars. In my case I got number “048”. Everything fits together extremely well and feels highly durable. The fact that it is so lightweight is incredible and for me that is great because it means I can put it on a mechanical mod without it feeling overly heavy.

The top cap is removable and you will notice the centre air post which is what you wrap your synthetic filler material around. The post does taper outward at the end and this keeps the filler from covering the air flow. The deck features a single air hole that rises as a short tube. The posts use Philips head screws that are suitably large, easy to work with and trap the wire well.

The included drip tip is short and reasonably wide bore and can be easily swapped out for any others you own. 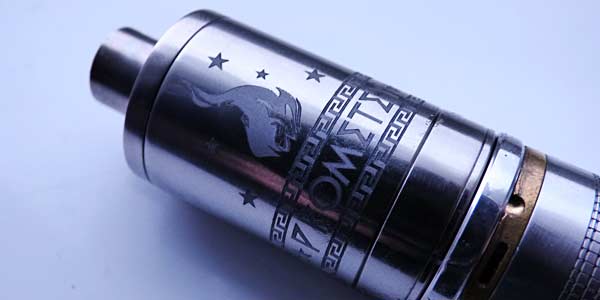 The airflow is adjustable but not in the sense that you can change it while the tank is screwed to your mod. Firstly you have to set the airflow ring to how you want it before screwing on the upper part of the tank. To be honest I like it fully opened up because the draw is just right for me.

At its most wide open the air hole is 2.2mm diameter but if you do want a more restrictive draw you can reduce it. There was some reports of a whistling noise with previous versions but that does not occur with the Prometey III. This RTA is for people who enjoy a mouth to lung vape because you can't really do a proper direct lung inhale with it. Having said you can kind of do it but it feels restricted and I don't think it is intended to be used that way. 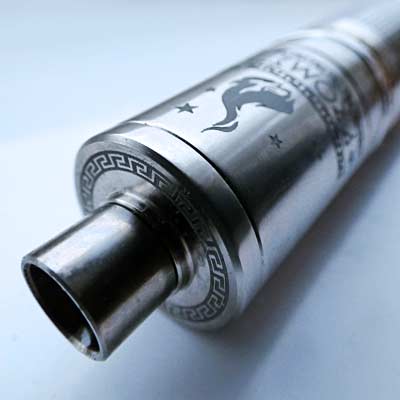 The Prometey III is quite different to build from other tanks in the sense that there are a few additional steps, but it is very straightforward. Firstly I remove the top cap and I cut a 5cm long piece of filler material that is 2.5cm in width. I then wrap that around the air tube and refit the top cap. With a pair of tweezers I make sure that the filler is distributed evenly with no gaps visible. Filling is easy and you simply pour in the juice and let the filler material absorb it. You want the filler moist but you don’t want juice pooling on the top of it because that will lead to leaking.

Titanium Mods do sell the filler material, sadly they didn’t have any in stock but since I was aware of which one they use I bought some from eBay. Funnily enough the actual material is Juwel filter pads which are used for aquariums. The beauty of this stuff is that it absorbs the juice really well. When it starts to gunk up you can simply remove it, give it a wash and pat it dry with a paper towel before putting it back in your tank. I have read accounts of people using organic cotton balls as the filler material and it apparently works fine so use whatever is your preference.

Fitting a coil is easy and I typically aim for a resistance of 1.0-1.2ohm. Depending on what type of wick material you are using there are different methods to how you actually position the coil. I actually use cotton so I position the coil so the wick rests on the tops of the screws and bends slightly over them. What you are aiming for is to make sure the wick makes contact with the filler because if it is set up correctly the wick will be continually saturated with juice. I have seen examples of people wicking this tank many different ways ranging from double looped silica wick as well as cotton and mesh.

As long as you set up the wick properly and you don’t go mad when filling this tank does not leak. If you do get any leaks at all due to overfilling just blow through the drip tip and have a tissue handy to mop up the excess which comes out of the air hole.

Throat hit is determined by how high you position your coil with it being extremely powerful if it is quite a way from the air hole. Be warned that this tank can kick like a mule and your 6mg juice can very quickly feel like 12mg after a few draws. Even when the coil is positioned close to the air hole there is a significant throat hit so if that’s not something you like then this tank won’t suit you. Personally for me the stronger the better so I really do enjoy it a lot! 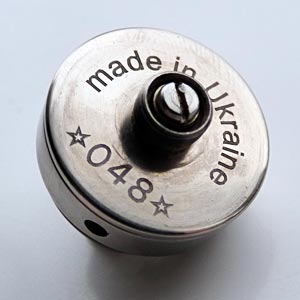 My first vape in the Prometey III was using Manabush’s Mojave Dessert which is a biscuit, tobacco base fused with a delicious apricot. In terms of flavour the Prometey is excellent with a real depth to the taste and you really do notice the undertones in particular juices. The Prometey gives me a fantastic warm vape and the draw is perfect if you enjoy mouth to lung vapes like I do!

Throat hit is seriously good and for me it really does feel very much like when I used to smoke strong cigarettes. There will be a lot of people who don’t like this kind of hit and that’s cool but I wanted something that would give me a much stronger vape and the Prometey certainly delivers that.

One advantage of this is that I find I can take fewer hits and still feel like I’ve had a good vape so from my point of view it means I am not going through liquid as fast.  Despite the size of the air hole the Prometey III puts out some decent vapour for a tank of this type. It will certainly never be a cloud chasing tank but it’s not trying to be.

I mainly use dessert and tobacco e-liquids in this tank but it gives me a cracking vape every time whether I use Black Note, Manabush or El Toro juices. This is a tank that I love and I make use of often! I have also tried it with Dripworx high VG juices and both Strawberry Custard Cream and Key Lime Cookie are quite delicious in the Prometey. 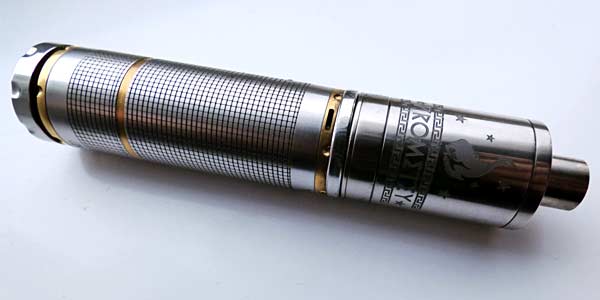 After using the excellent Liberty RBA and really enjoying it the Prometey III was an essential purchase for me. In my opinion Titanium Mods make some truly superb and highly attractive products and I'm seriously looking forward to using the Achilles II RDA when it arrives. Service from Titanium Mods was once again excellent and Aleksandr is extremely helpful in answering any quesitons which you might have.

For anyone who wants to reduce their nicotine level, the Prometey III much like the Liberty is quite hard hitting so you will definitely be able to drop without any noticebale difference.

The Prometey III is priced at €115 and at the current rate of exchange that works out at about £82.73. For a high end atomizer the price is competitive and when you consider that it also made from titanium, weighs practically nothing and is built to last I feel it is definitely worth it!

Remember postage is free for any order over €100. The Prometey III can be purchased here at Titanium Mods.