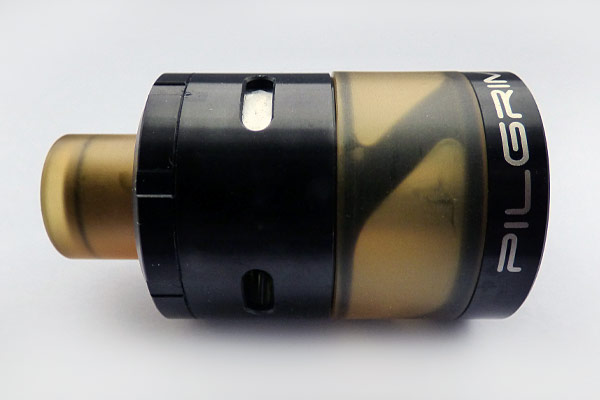 The Pilgrim GTA Tank by Digiflavor is something of a hybrid design. In some ways it features aspects of a traditional Genesis atomizer or RDTA but also includes a unique fill system which is very much identical to the one on a typical RTA. This highly unique atomizer features a classic Velocity style deck and can be set up in either single or dual coil mode.

With fully adjustable airflow the Pilgrim GTA can suit a variety of vaping styles and features a simple to use top fill system. In addition the PEI drip tip and tank are heat/high-temperature resistant and breakage-proof. This really does sound like a solid RDTA/RTA hybrid, so let’s have a good look and see what it has to offer.

On the whole the 25mm diameter Pilgrim GTA is nicely put together and feels very robust. It certainly looks attractive and the anodized black Stainless Steel finish (also available in standard silver finish) is nicely complimented by the yellow drip tip and tank section. Logos are kept minimal simply featuring a pilgrim symbol and the “Pilgrim” wording in silver.

The top cap which incorporates the airflow adjustment ring is made up of two pieces, the screw on main barrel and a removable screw on lid which reveals the two filling slots. If you remove the top cap and look underneath you will see that the top cap has an inner barrel which keeps E-Liquid away from the deck when filling as you might expect this significantly reduces the risk of any leaks and is very similar in its design to the Steam Crave Aromamizer so its best you think of this atomizer as a cross between a RTA and an RDTA. 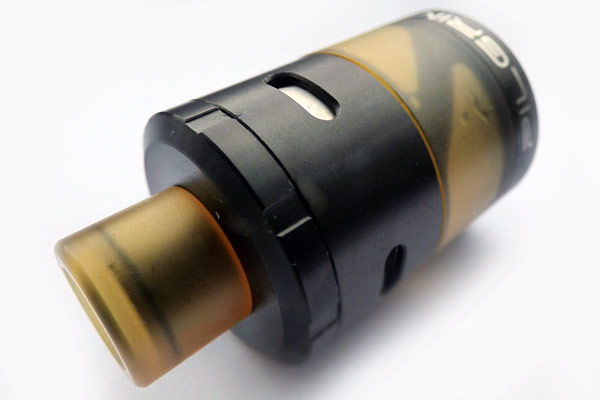 The threading on the top cap is a bit hit and miss in the sense that the threads feel somewhat crunchy to me and this can make fitting the top cap more awkward than it needs to be. It isn’t the first time I have found this issue with a Digiflavor product since my Siren 24 is exactly the same. It’s perfectly serviceable of course and at the marketed price point acceptable but just take care not to force the top cap to go on or you might make the threads worse, that is assuming they are all somewhat crunchy.

A wide bore PEI (Thermoplastic Polyetherimide) or Ultem as it is commonly known drip tip is pre-fitted and a 510 adapter is included should you wish to make use of your own. In addition the Pilgrim comes with an 810 drip tip compatible wide bore top cap and I think it’s great that Digiflavor have provided users with plenty of options.

The deck uses the ever popular style but unlike most RDTA’s it uses a floating style design and there is absolutely no need for wicking holes because it is entirely exposed with a large amount of space on all four sides which go directly down to the bottom of the tank. When you first receive the tank two of the sides for your cotton wicks are plugged with a ceramic single coil adapter block which is easily removable should you wish to run the tank in dual coil mode. The tank section is also made from Ultem and holds 4ml of E-Liquid. 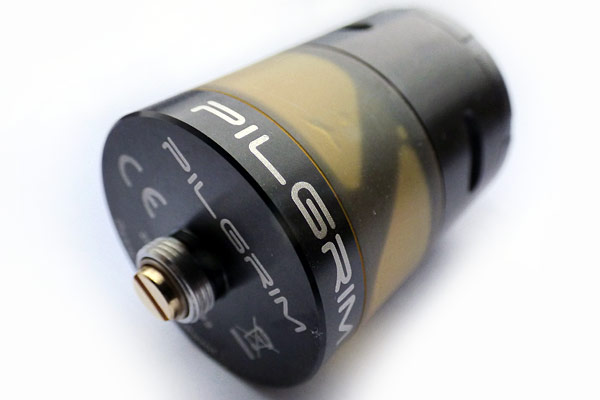 The airflow is made up of three Cyclops style slots all of which are adjustable. A single slot is used when using a single coil and the other two are for a dual coil setup. What is extremely weird and almost annoying is that the airflow is part of the top cap so when you screw the top cap down you have to unscrew it slightly to be able to adjust the airflow, so the slots line up with your coil/coils.

It seems very unintuitive and if you aren’t careful you can fit the top cap take a vape and quickly realise that the airflow isn’t lined up. What’s worse is that even when you have lined it up you can accidentally knock the airflow adjustment and once more find that there is suddenly no air going to your coils. If the airflow only had some notches on it which prevented this possibility it would be so much better.

Regarding the airflow itself, full opened up it offers a slightly restrictive lung inhale but this can be reduced greatly if you find it too airy. In single coil mode it is definitely a restricted lung inhale and by reducing it you can get to the point where it offers a reasonably enjoyable mouth to lung vape. If you make use of the drip tip adapter and a narrow diameter drip tip then I am sure you can get an ideal restricted vape. 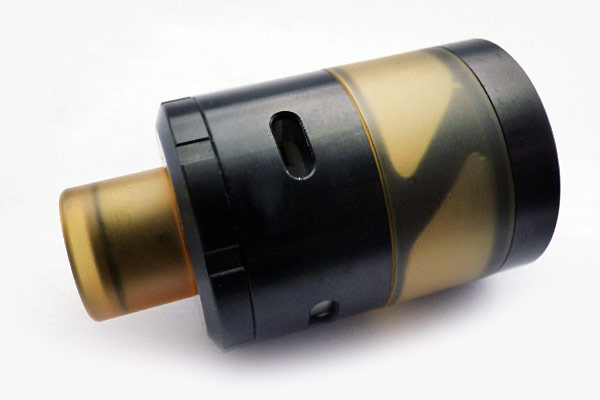 Building the Pilgrim GTA is very straightforward due to the simple to use Velocity style deck. The only noticeable issue is that due to the inner wall design there is less space on the deck than you might think and if you aren’t careful you may get a short when replacing the top cap. I managed to get 3mm ID coils in there by heavily pinching them but in hindsight I think you’d be better off going 2.0-2.5mm ID.

Wicking is dead easy and you only need to have the wick trailing about one third of the way down the tank. Filling up this tank is an absolute joy and there is no need to try to fit your juice nozzle around your wicks or down some tiny fill hole. Simply unscrew the lid on the top cap and it reveals two slots which due to the inner wall are isolated from the deck with the juice falling down either side to the bottom of the tank. The only thing that is a little awkward if you’re not in good light is seeing the fill level due the thick yellow Ultem but I just filled until I could see it pooling in the slots and even though the liquid level was actually higher than the deck I had no leaks at all once I screwed the top cap lid back on.

Cleaning is fairly easy since there is so much space for water to run to the side of the deck and a quick rinse tends to do the job. For more thorough cleaning you will need to remove the 510 pin to disassemble the tank. 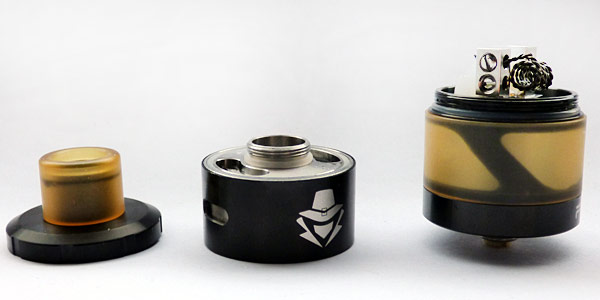 For my first vape I had set up the Pilgrim with a single coil. Nothing fancy just a 3mm ID 26 gauge twisted coil which had a final Resistance of 0.6ohm. I had primed the coil/wicks and filled up the tank with some Vape Wild Peach Cobbler. Having messed around with the somewhat annoying airflow ring I made sure to have only one air slot open and took my first vape. Flavour was extremely good and I couldn’t fault it. What’s more the Pilgrim puts out some pretty impressive vapour. I vaped the entire tank’s worth and had no dry hits or leaking. 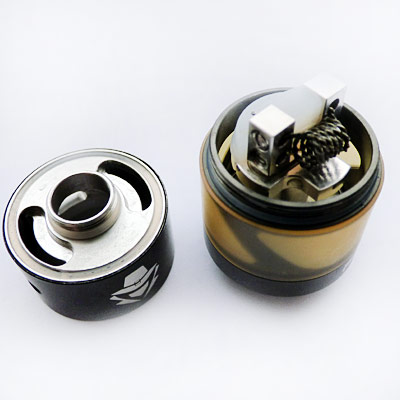 Moving on I removed the single coil adapter block and fitted an identical twisted coil which took the Resistance down to roughly 0.3om. This meant I had to ramp up the Wattage and as result it was certainly a much warmer vape (this time I was using Vape Wild Lemon Berry) but the drip tip did help to minimize the amount of heat which reaches your lips. Flavour was certainly better in terms of being able to notice the entire E-Liquid profile and vapour production definitely intensified but you expect that as a given with a dual coil setup.

With both airflow slots open it felt a bit too airy for my tastes and to a degree it did diminish the flavour a little so I closed the slots down by half which was much better. The only real problem with using a dual coil build is you go through the juice much faster and to be honest I though the vape was great on a single coil so if I owned this particular atomizer myself I would probably run it in that mode only.

What I really did like about the Pilgrim was the anti-leaking design and even when filled quite full it never leaked on me. I even turned it on its side for a bit and not one drop poured out. From an innovative point of view I was impressed.

In actually vaping terms the Pilgrim is excellent and delivers great flavour and generous vapour production. What’s more the inner barrel anti-leak design is very innovative and I do like the fact that Digiflavor have offered something very new with this atomizer. If it’s guilty of any faults it would be the annoying and not very intuitive airflow adjustment ring (you’ll likely get used to it) and the somewhat crunchy threads which become very noticeable when screwing on the top cap. Another potential misstep for your consideration might be the limited build space on the deck and the fact that it is a little tricky to observe the fill level through the Ultem tank section.

Nevertheless if you want a solid vape and want the flexibility of a single and dual coil capable RDTA with the convenience of RTA style filling and with hardly any chance of leaking the Pilgrim is certainly a very worthwhile option! 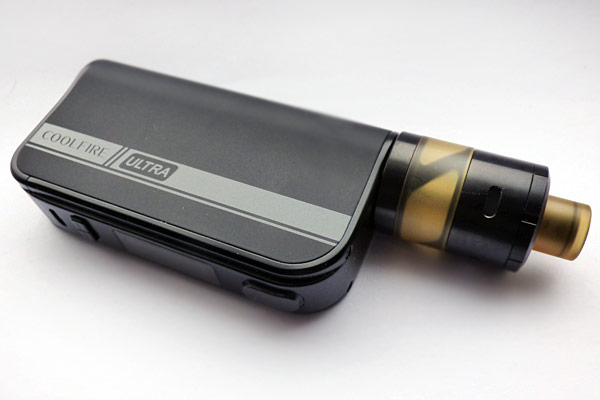