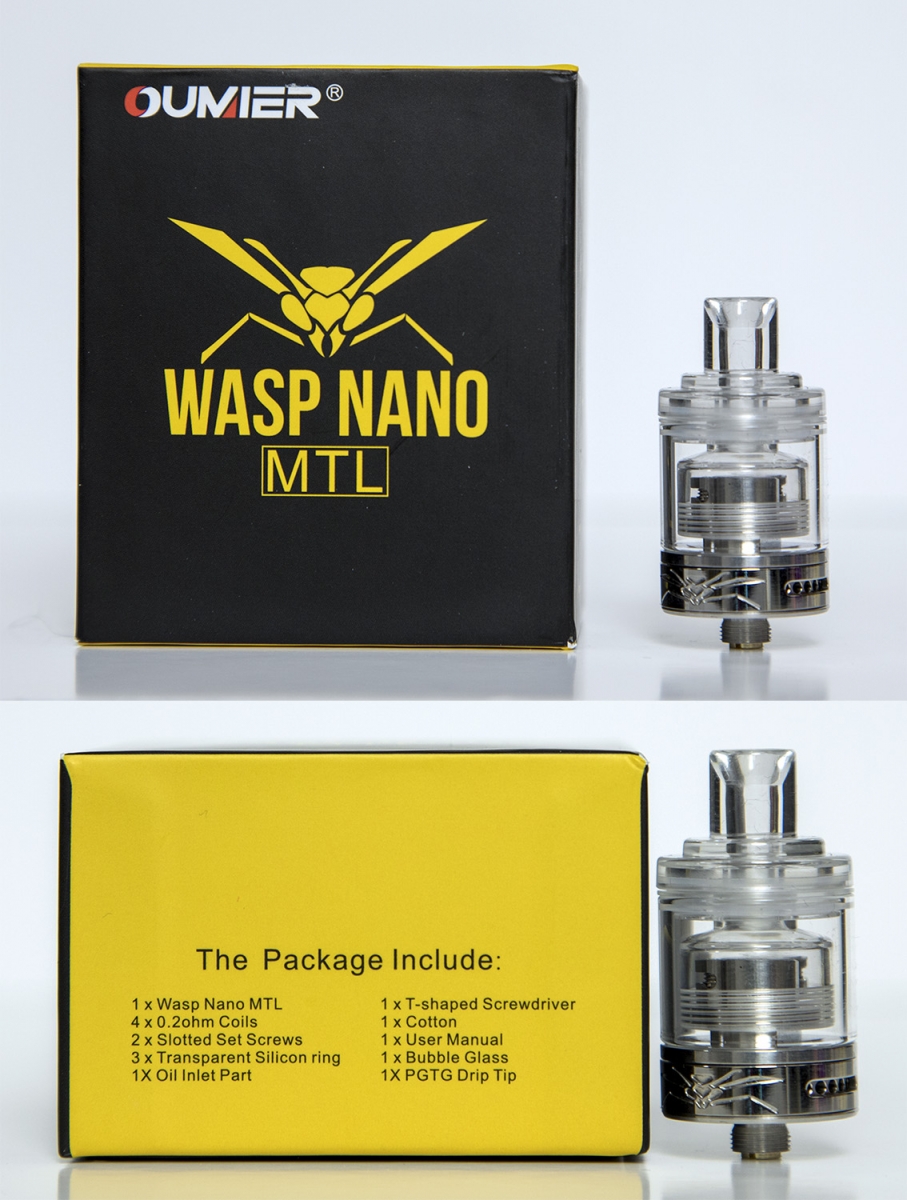 I’m a huge fan of Oumier Products, they are usually innovative and deliver great flavour, so I was excited to hear they were releasing a MTL (Mouth To Lung) version of the already amazing Wasp Nano RTA, so does this attempt at MTL work?

The Oumier Wasp Nano MTL RTA is an almost, sadly its largest flaw is likely to be a deal breaker for most MTL fans that require a tight draw. The airflow control is where Oumier dropped the ball, it is simply too loose which is a shame as the rest is superb. Flavour is great and it's easy to build with a very interesting design.

It’s not all bad if you learn to live with its looser draw. Despite its airflow, I still enjoy this RTA. Read on if you are still interested.

Excuse my poor photos, I was having an off day (just like the Oumier employee in charge of Airflow design).

One of the things I like about Oumier products is they always provide you with plenty of goodies in a small package, the Nano MTL RTA is no exception and there are some VERY interesting coils included. Here’s a list of the contents: 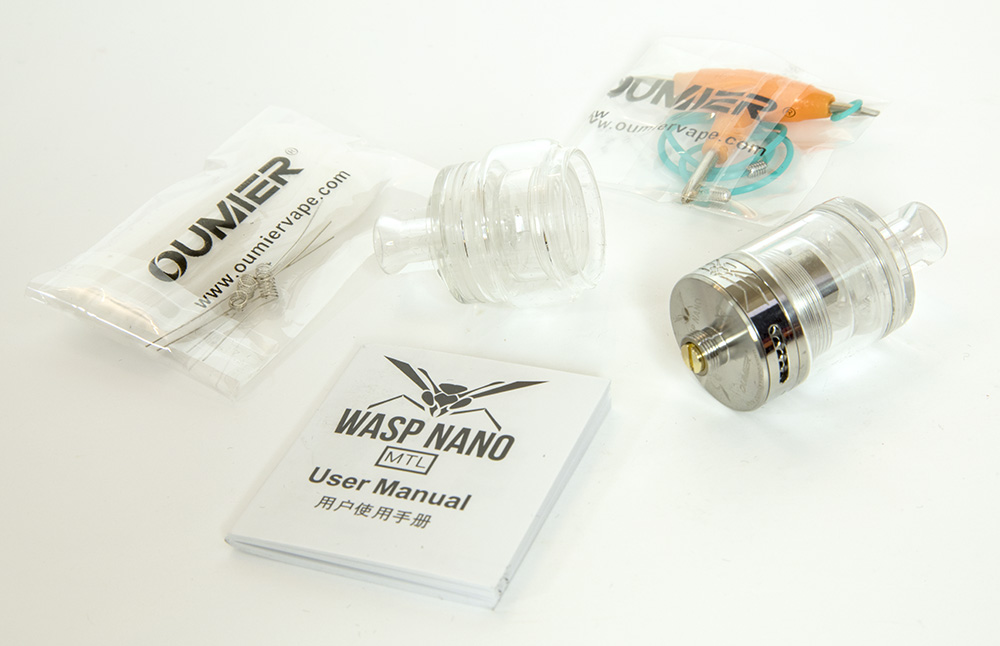 So the first thing that leaps out is 0.2Ω coils! It’s not a print mistake, they really are 0.2Ω and lower when trimmed. 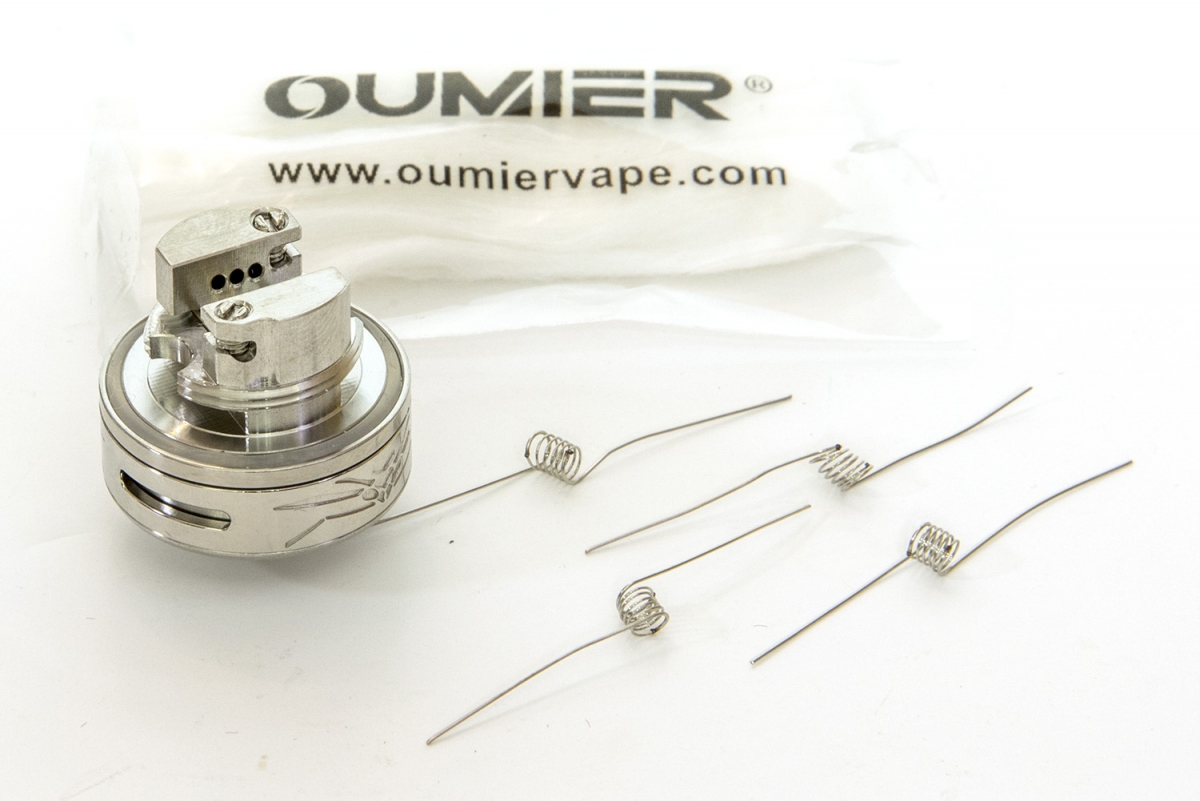 I’m no expert on this type of coil, but basically there are two materials welded together (you should be able to make out two blobs on the coil), so the legs are a lower resistance than the coiled part resulting in this strange low ohms coil which is actually very effective. I was vaping under 8W and was getting a nice warm flavourful vape, more on that later.

It comes with two glass options, a straight and a bubble glass, and both come with a separate chimney and mouthpiece which are identical and made from plastic. The straight glass only holds 1.2ml, and the bubble glass holds 2ml which is plenty for low wattage MTL.

The build deck is pretty simple and adopts the same clamping system as the rest of the WASP atomisers. It’s a single coil deck with two notches for your wick legs to fit in.

The airflow comes up through the sides and hit the lower part of the coil if positioned correctly. There is an adjustable airflow ring which has five of the same size holes (guestimate around 1.5mm) and these are the main flaw in this otherwise superb design.

Building is really easy. My first build was using the included 0.2Ω coil. I have no idea what the material used is, but appears to be two different metals welded together to achieve such a low ohm rating for such a small coil. The internal diameter is only 2mm, but the deck will accommodate a 3mm fused clapton coil (Which I used on my 2nd build). 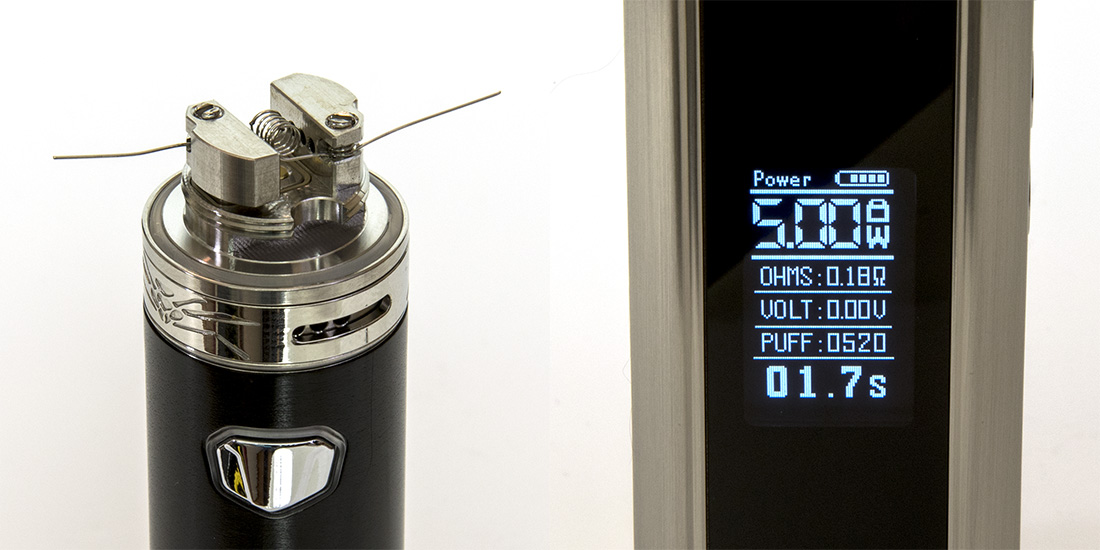 CAUTION Do not use the provided coil on any mech or bypass mod, only use a variable wattage mod

To fit the coil, you unscrew the two screws enough to allow the legs to slip into the side slots, slip the legs into each and tighten them up. The coil will require a little straightening using a coil rod or screwdriver, it will naturally form a spaced coil. I raised the coil up enough to allow the airflow to hit the underside. Once you are happy with the position, clip the excess legs off then dry burn **use VERY low wattage to dry burn** I used 5W which was ample, as you can see from the photo my coil came out at 0.18Ω which is something I have not come across before in a small MTL coil. I tried contacting Oumier regarding the materials used but got no reply.

Going against my better judgement, I continued with this build. Wicking was very easy and, using the cotton supplied, I pre-rolled and pulled it through, cutting the cotton to length. 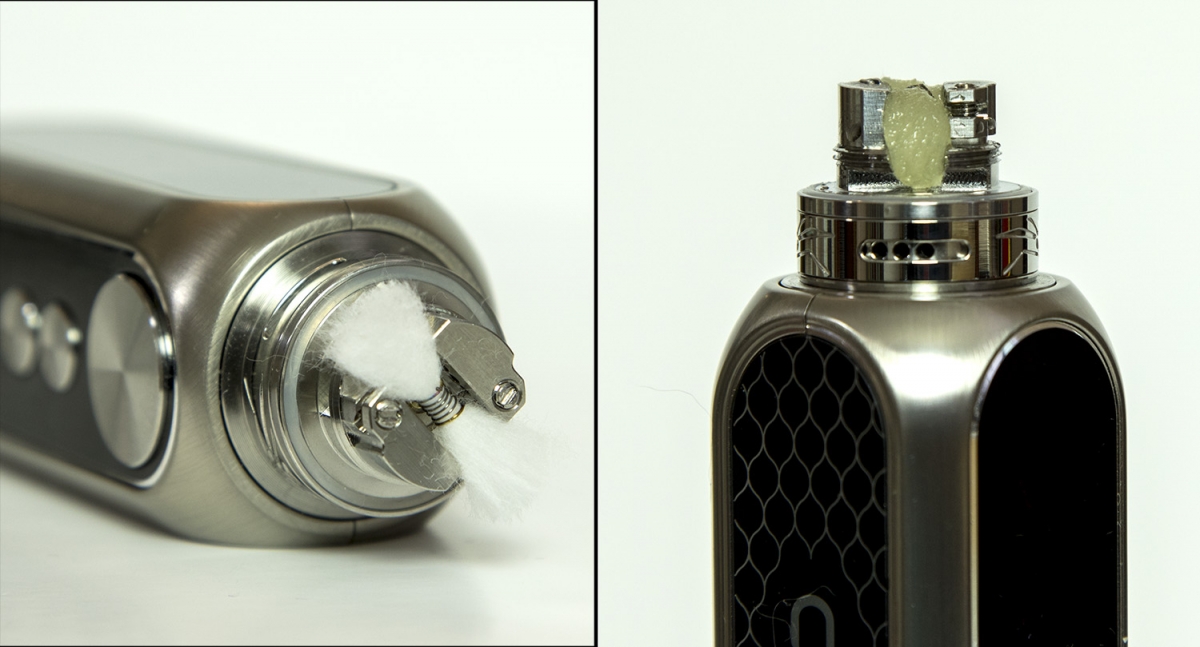 The key to your wick length is to have it hanging just above the base as in my photo, this length is ideal, wicks fast and I had zero leaking.

Saturate your wick and screw on your main tank, fill up through the top fill cap and you’re ready to vape. 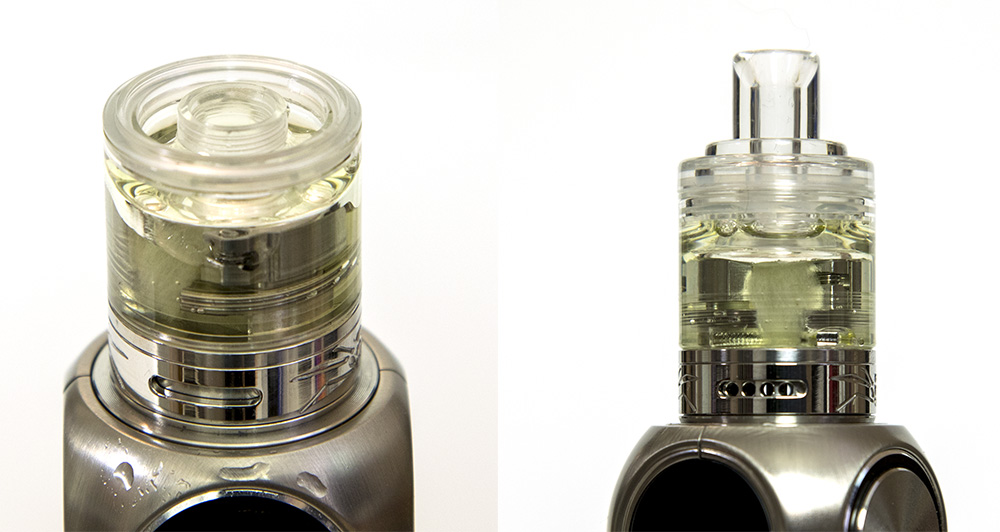 I neglected to close off the airflow on my first ever draw and I was taken aback just how airy the draw was! Fully open, it’s a very loose DTL draw, which wasn’t a good sign for a proclaimed ‘MTL RTA’, so I closed it down to just one hole open. This was also way too loose for MTL. I then closed it off so a small part of the hole was exposed, again it was a loose draw. I even closed off the airflow fully, guess what? That too wasn’t a tight draw. It was similar to a pod style draw which I just had to accept and adapt to.

It’s hard to describe how I vape it, I kind of sip it – erm…. that doesn’t make sense I know but anyway, I put aside my utter disappointment of the airflow and turned my attention to the flavour. This was actually the WASP Nano MTL RTA’s saving grace, the flavour was superb due partly to the coil being raised closer to your mouth and the decent size drip tip / top cap.

Power wise, it was a real eye opener for me. I started at 10W, but this was too hot and I ended up vaping at 7W. I’ve never experience such a superb, full bodied flavour from such a low wattage and low ohm coil. I was getting used to its terrible airflow and actually started enjoying this RTA. Even after I finished road testing it for review, it is still in my rotation of MTL attys due to its flavour, but I still can’t get passed how Oumier messed this up so much. It could and should have been a contender for MTL RTA of the year, but as it stands, its in no-mans-land.

I have also tried a 1.2Ω 2.5mm diameter fused Clapton coil in it, which required the wick legs to be thinned a little. It was pretty much the same for flavour, but required a higher wattage so I have now gone back to the provided coil, though I am still in the dark as to what they are made from. A 3mm coil will also fit, though I suspect it could choke the flavour.

Capacity wise, the 1.2ml straight glass option just didn’t cut it, so I tried to see if Oumier had done the same as the WASP RTA (DTL version) where you could bottom fill it as the top cap was hollow allowing another 1ml, but it wasn’t possible. There was room for more eliquid, but the gap between the glass and chamber was too small, so I ended up using the 2ml bubble glass option. 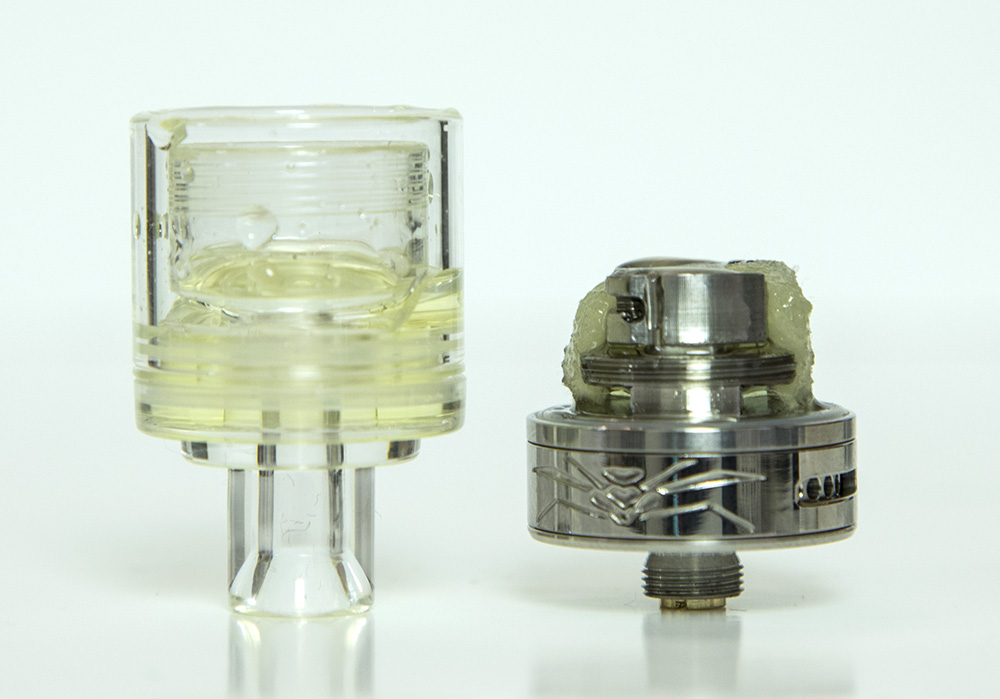 I am baffled how Oumier could let this go into production and be released without addressing the airflow issue. Designers aside, surely someone tested it and discovered it was not a mouth to lung draw? But sadly not, and they have instead released this ‘MTL’ RTA at risk of Oumier’s otherwise superb reputation. Every Oumier DTL product I have tried has been innovative and delivered superb flavour, the WASP DTL RTA is still my all-time favourite single coil RTA. It appears they simply do not understand Mouth To Lung and dropped the ball on this first attempt (that I am aware of?).

That aside, if you don’t mind a loose draw MTL, then I still rate this tank based on its flavour at incredibly low wattage. I don’t quite feel I wasted my money, but if I had tried it first, I would have been unlikely to purchase it.

All I can hope is that Oumier release a V2 and address the airflow, which would surely be a winner.

I simply cannot recommend this MTL RTA, simply due to one single factor which is so glaringly obvious in mouth to lung tanks, and that is the loose airflow, which is such a shame as they have got almost everything else right. The flavour is superb once you get used to the loose draw, this goes down as one of the most disappointing releases from Oumier – an ‘Almost’ at best. 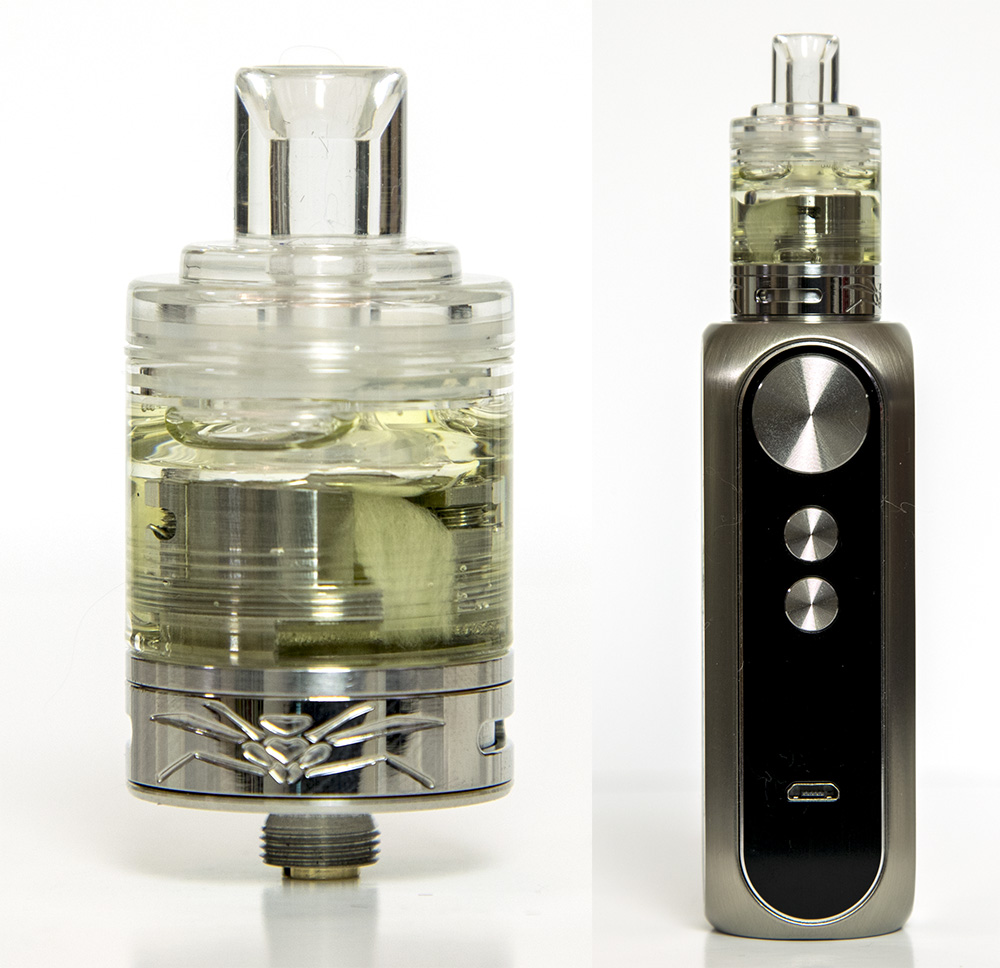