Another 'bought with my own money' review and build advice tips.

Before I begin, it’s been pointed out most of my reviews are always positive, there’s good reason for this as I am very picky what I choose and research before I buy, I do have some crap items in my review queue and I will pull no punches.

The Bulk RTA is a collaboration between Oumier & YouTube reviewer VapnFagan. 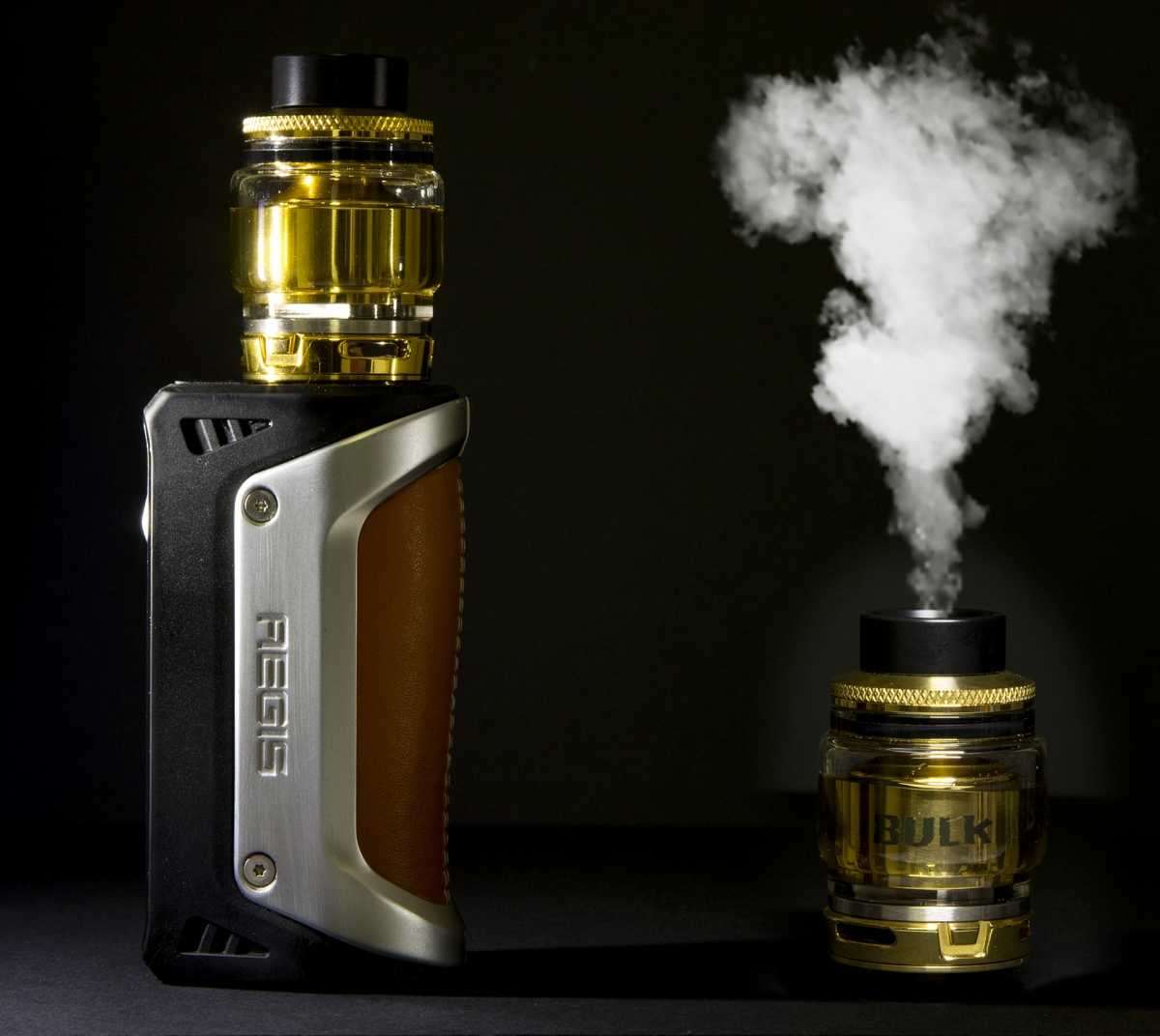 The BULK is large, airy with full bodied flavour as well as being easy to build and provides a unique satisfying vape - highly recommended. 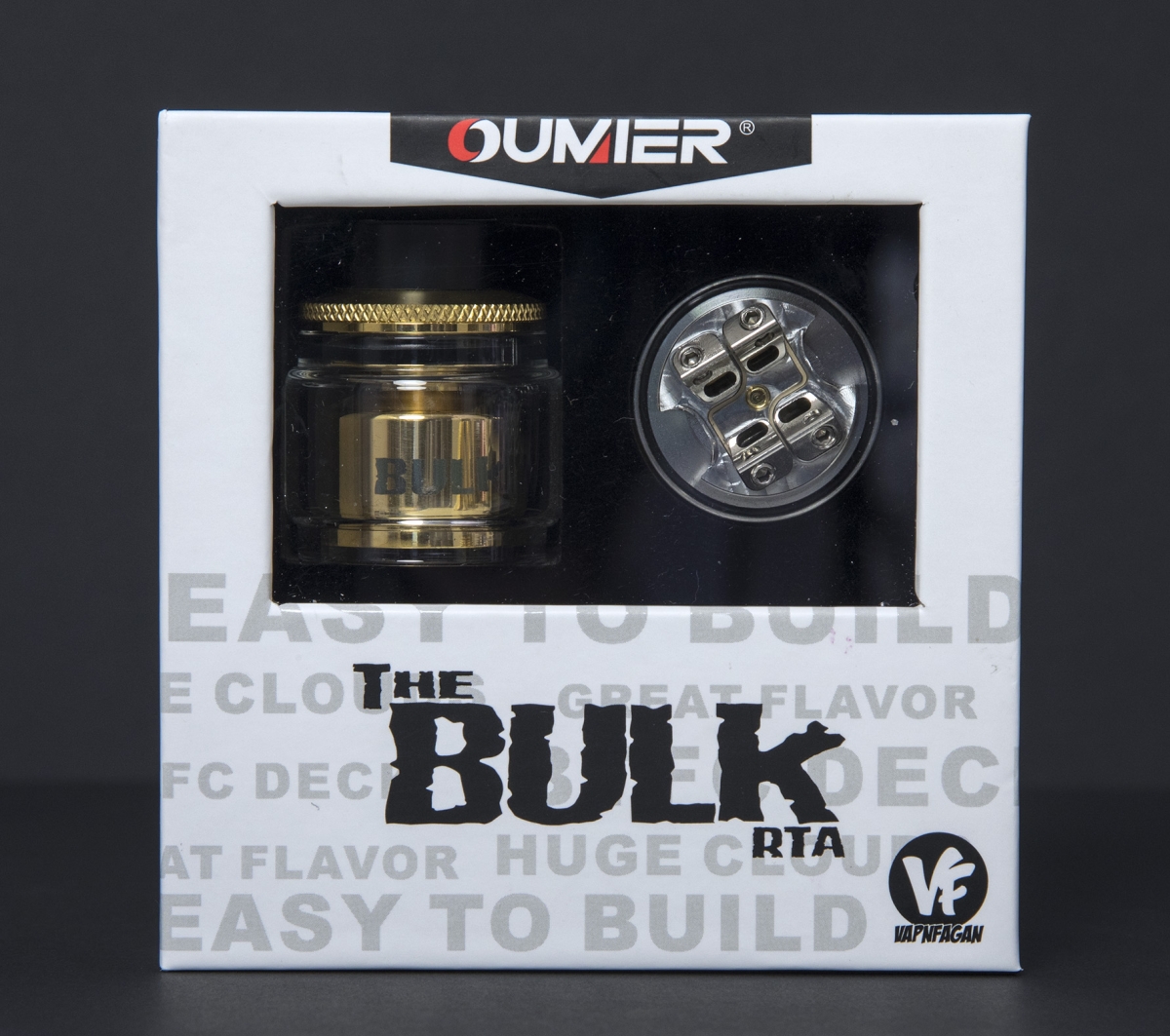 The usual RTA contents and the box has a window with the deck clearly on display which is a pro, on the back are the specs, there are notches so you can open the box easily which is also nice, very well presented, it also includes everything you need to get started.

Missing information which is annoying is the coil material, capacity and surprisingly the size! 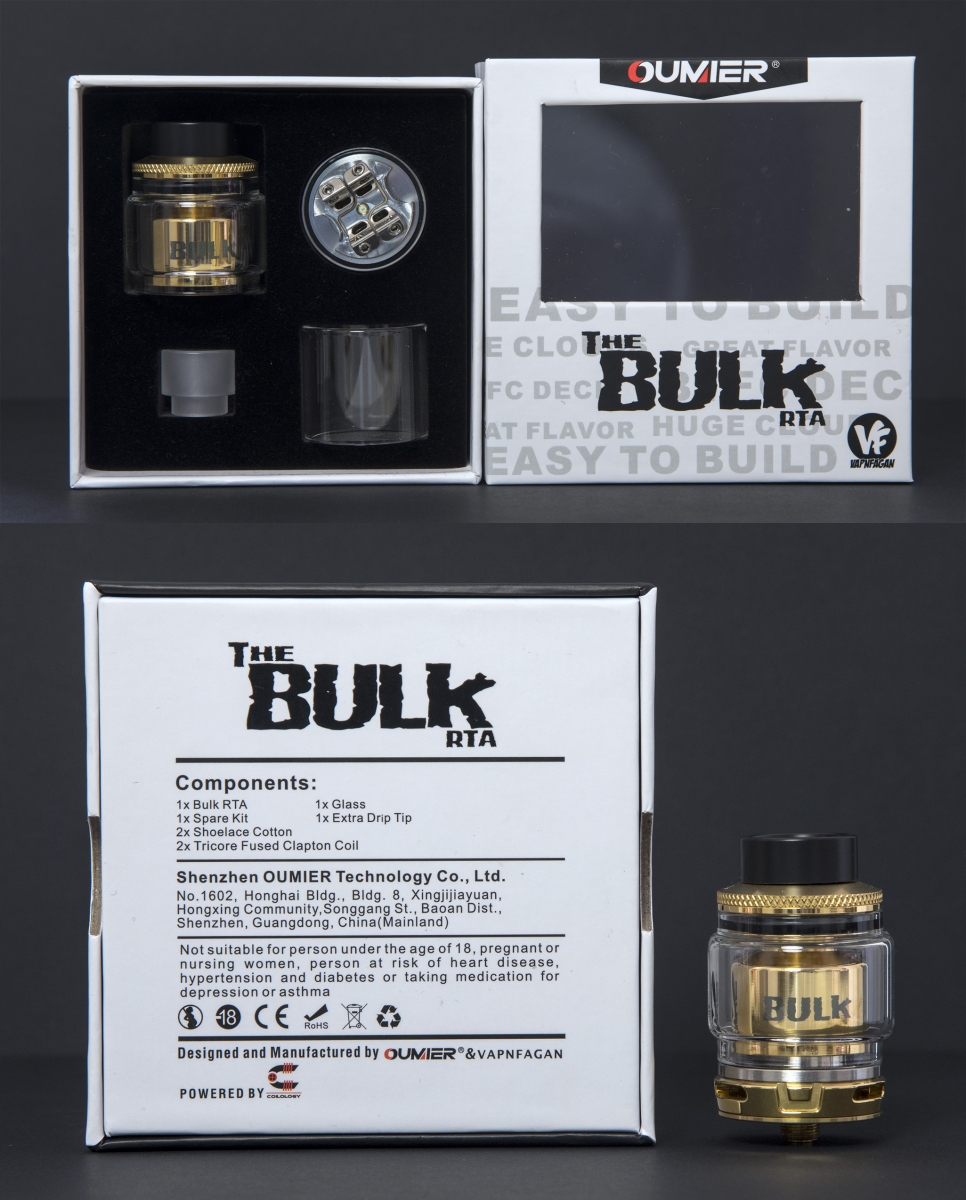 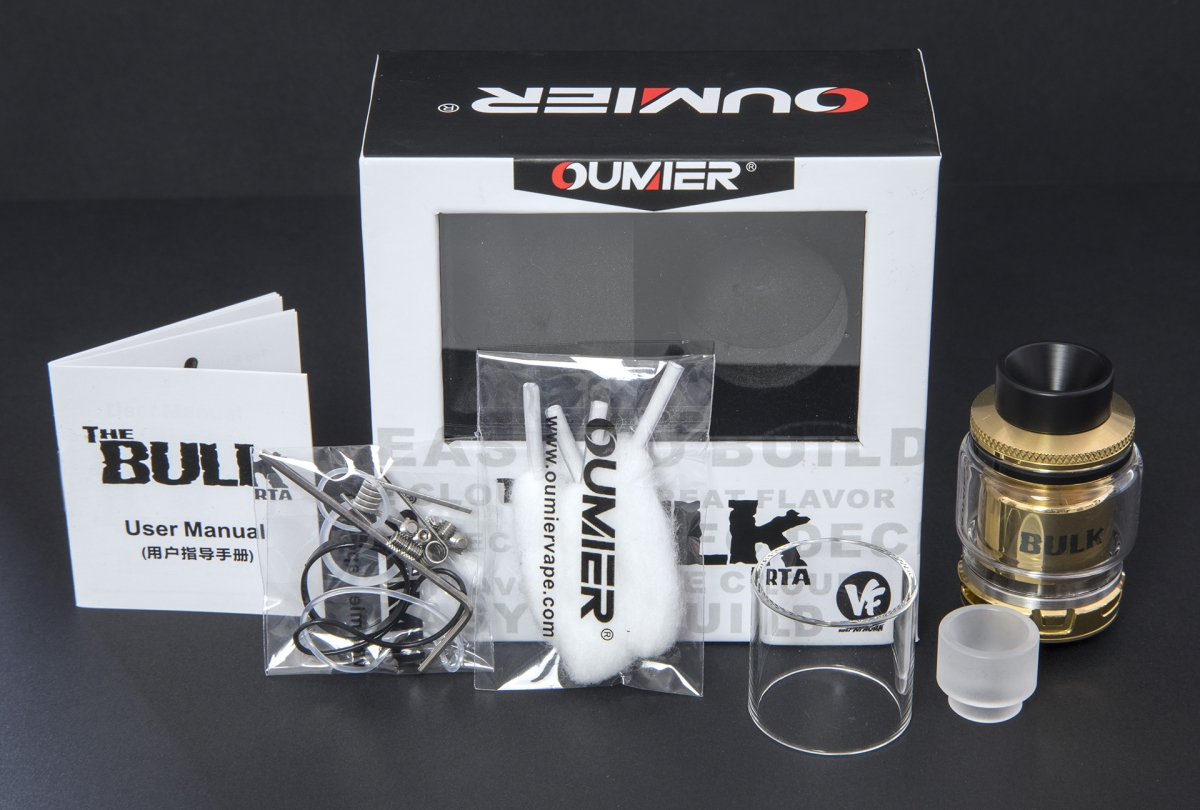 The RTA strips down simply by unscrewing everything, it all feels good quality and not too many parts, and though for the life of me I could not get the bubble glass off! I tried every trick in the book but its sealed solid, any more force I feel would have broken it.

It features a postless build deck which is nicely raised making it less likely to leak and a curved base for bottom airflow. 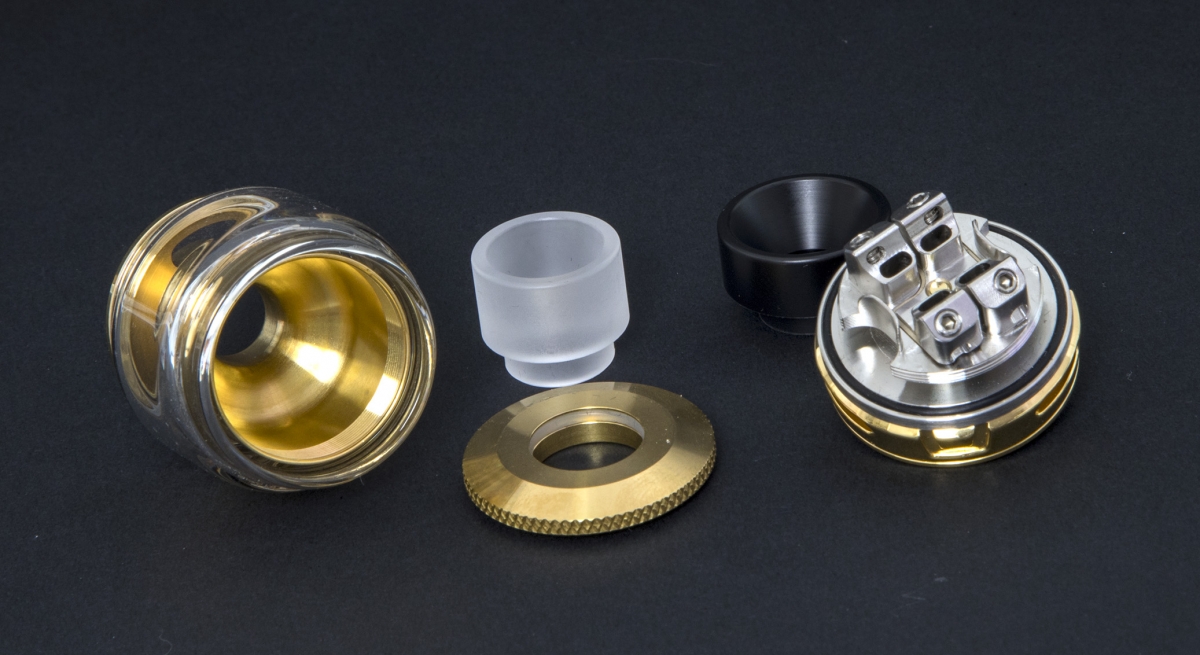 Using the provided coils and cotton it’s slightly tricky to position the coils as there is very little space, I found this strange, the coils are flat claptons 3mm inner diameter, anything larger would be a challenge, though later on I understood why it’s designed this way, wicking is straight forward.

There are 4 slots and screws that hold the coils in place, for such a large build deck you don’t have much room but coil positioning feels logical and symmetric to the airflow and curves, insert your coils then slightly nip up the screws and tweak the position as photographed, tighten up the screws and tweak again if required, you then need to cut the excess legs as close as possible to avoid catching the chimney section, no need to space the coil just dry burn around 30 watts and strum out any hotspots and it’s ready to wick.

The coils came out around 0.13 Ohms which is very low, I was expecting it to require high power but that’s not the case, more on that in ‘First Impressions’.

Using the provided weird doubled ender (trying hard to resist a pun!) shoestring cotton which is already formed to suit a 3mm build, pre roll it slightly then pull through each coil, now the extra-long length appears to be long enough for 2 wicks so I cut off the excess accordingly and it was exactly the right length, though cotton is cheap so you might want to avoid this method if you are unsure, too short and you risk leaking.

The ends will need thinning out a little and ‘floofing’ up, there are 2 raised wick notches for the cotton to go over and sit into the 2 channels, legs should just touch and cover the upper base, trim to length, it’s best to prime first by pulsing while dripping juice onto the coil until the legs are saturated, then position them into the channels so they won’t snag on the chimney, that’s pretty much it, assemble, fill and it’s ready to vape.

Top fill by unscrewing the top cap and pour liquid into the 2 generous sized kidney shaped ports, it’s forgiving if you overfill as there is a decent recess, replace cap taking care not to cross thread. 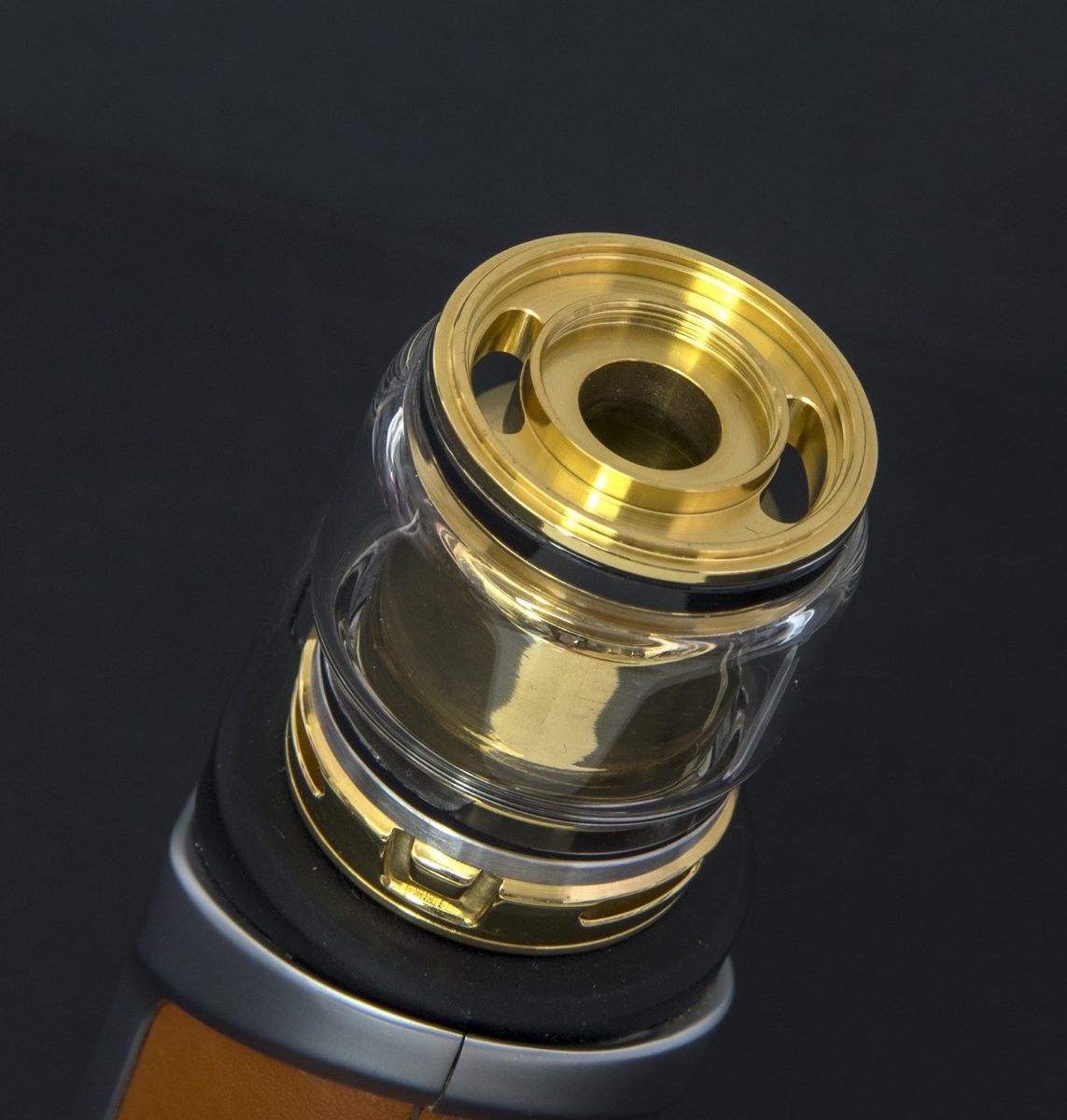 I had my reservations about buying this tank but it was the OUMIER brand that made me take a punt, every Oumier atty I have bought have always been excellent and innovative (one of the few companies that doesn’t copy others), even though it was larger (28mm) than I normally buy I had it in mind for the superb Aegis 80w and opted for the Gold colour, mounting it on the mod brought a smile on my face, it just looked right and it’s as if it was made for this mod, no overhang and plenty of room to spare, I also tried it on my Smok Species which fitted with no overhang, though it didn’t look right, it also fits nicely onto the Smok Mag and suits it but forget it if you want it for something like the Voopoo Drag! 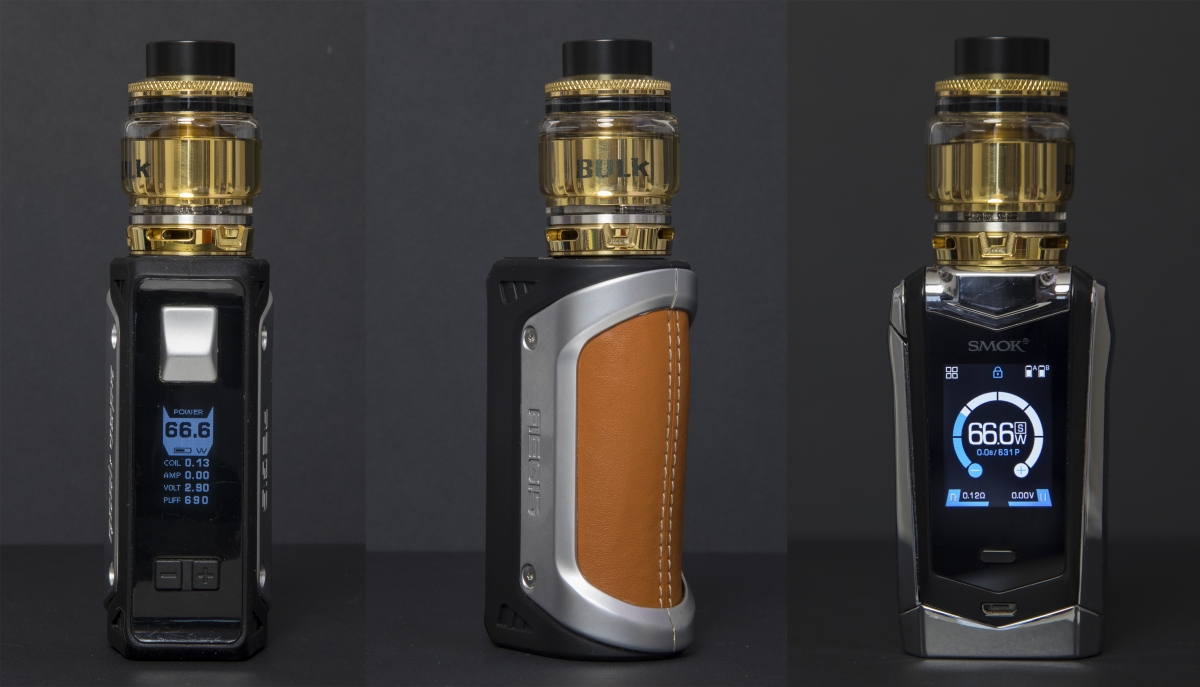 I don’t often go for Gold colour but I had this in mind for the Geek Vape Aegis 80 and suits it well with the tan leather, the design is easy on the eye, the black drip tip and seals contrast nicely, the 3 slot bottom airflow has the perfect tension with a nice tapered shape to it, though some might not like the way it tapers down.

Now onto the most important part; the vape!

All of the above great features mean nothing if the vape is poor, fortunately Oumier have done it again and produced an amazing flavoursome RTA, I rarely vape with the airflow fully open and started off with it half open, it was okay but after opening it fully it came alive, the draw and flavour was sublime! It’s only now you appreciate the restricted build and proximity to the airflow, the air flows all around the coil with no spit back and the domed chimney pulls that full flavour up at just the right height, the 810 drip tip feels HUGE as it opens out in a conical shape to finish of that huge vape. 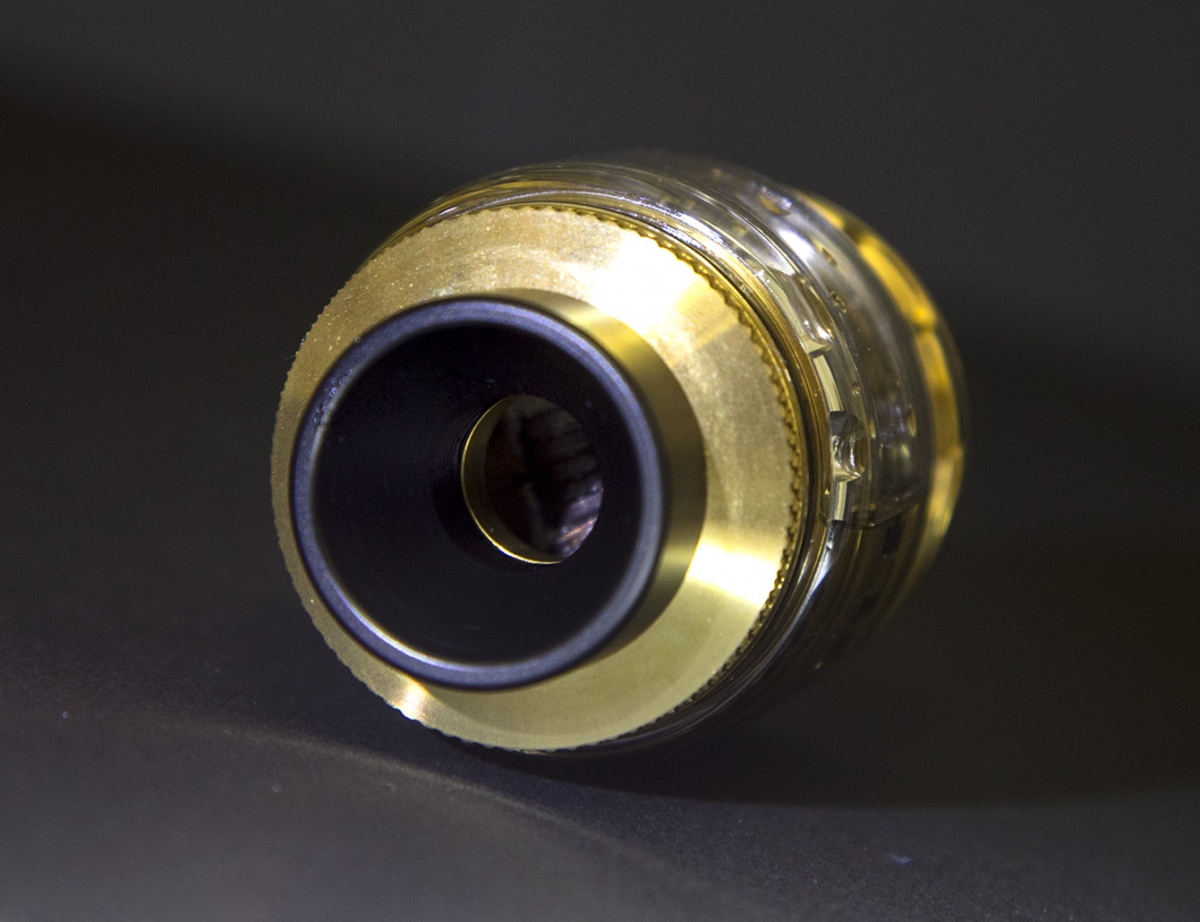 It’s like nothing I have experienced before, the crazy Steam Crave Titan sort of gave that large airflow draw but just didn’t deliver the flavour as good as the Bulk does.

Onto the low Ohms, I expected I would need over the 80 watts the Aegis maxes out, thankfully it requires a lot less power than I expected, at 50 watts it’s pretty good though I prefer a warmer vape and found 60 watts to be my sweet spot.
(My habitual OCD 66.6 watts was just a bit too high)

The drip tip being so wide first felt like a con, it’s just so wide that it doesn’t feel natural, so I tried the narrower clear drip tip….. just no! it lost that perfect draw and immediately popped the big bore one back on, I soon got used to it and really enjoy using it.

Chain vaping is no problem, it keeps up nicely, it’s not too thirsty and a 6.5ml filled tank last quite a while, I’ve yet to have a dry hit and the build has lasted well.

The only slight niggle I have is the screw on top cap, though it’s knurling is very good and grippy I would have liked to see the latest trend of a sliding top fill but as it’s not as thirsty as say a mesh style tank it’s no biggie. 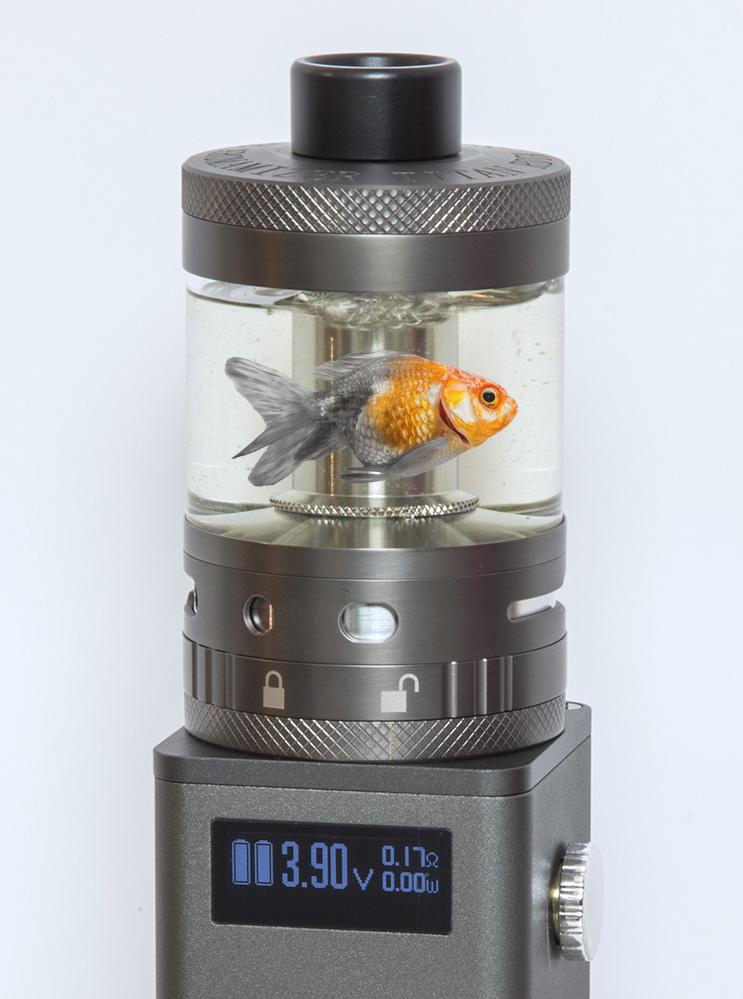 I’m only comparing this RTA due to its HUGE airflow which is the closest to the Bulk, as magnificent as the Titan is and I’ve had some decent builds on there it’s just meh for flavour, the Bulk beats it hands down, though I do like the locking option on the Titan.

Though it’s quite different this is the closest RTA (RDTA but I’ve only used it as an RTA) for flavour though it’s an entirely different vape, requires less airflow and just doesn’t give that Bulk large draw, still one of my favourite attys but it’s chalk and cheese.

I’m clutching at straws here for compared to as it’s so unique, for those familiar with the Oumier VLS which is an RDA it gives a similar flavour but much much larger draw.

To give you an idea of its size here it is next to its baby brother, the single coil Oumier Wasp Nano RTA. 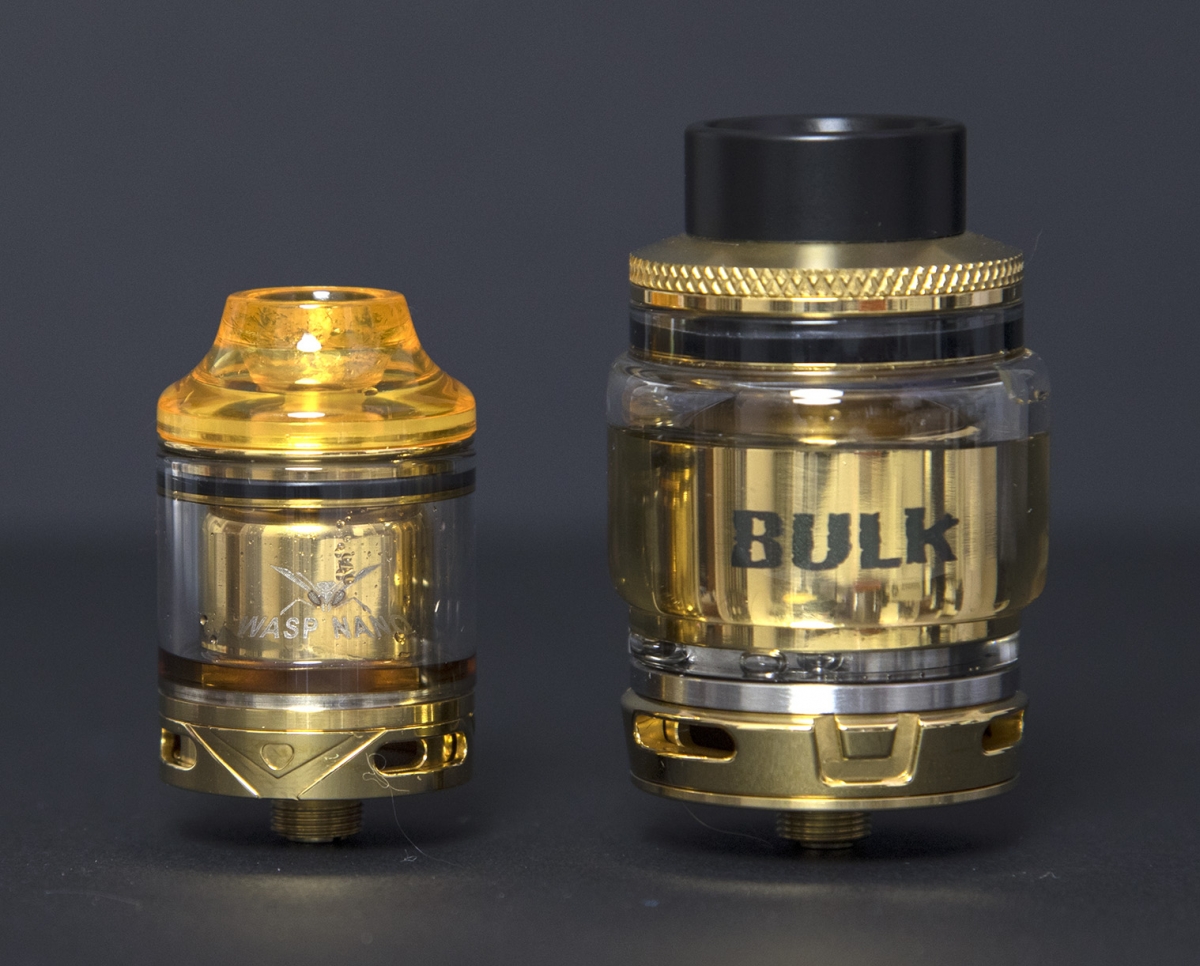 As mentioned earlier this was a punt I wasn’t sure about, but it turned out to be a great purchase, only a couple of months ago I was under the impression RTA’s had had their day with the evolution swinging back to stock coil mesh style tanks and squonking RDA’s but Oumier have shown there is still room to improve RTA’s to still have a place in the market, I doubt they will ever beat stock mesh tanks for intense flavour but the vape experience between them is so different and enjoyable in their own ways that I now have swung back to including RTA’s in my arsenal of attys.

In a nutshell the Bulk RTA is a fantastic well designed tank and the airflow and coil deck are its main strengths to produce a big flavour draw vape experience with huge clouds if that’s your thing, one of the biggest cloud chuckers I own.

Finally I am a big fan of Oumier products, they don’t just copy what’s out there as clearly put a lot of R&D and testing into their products, they also don’t just churn out atty after atty like a lot of companies do, instead they spend their time producing stand out innovative products. 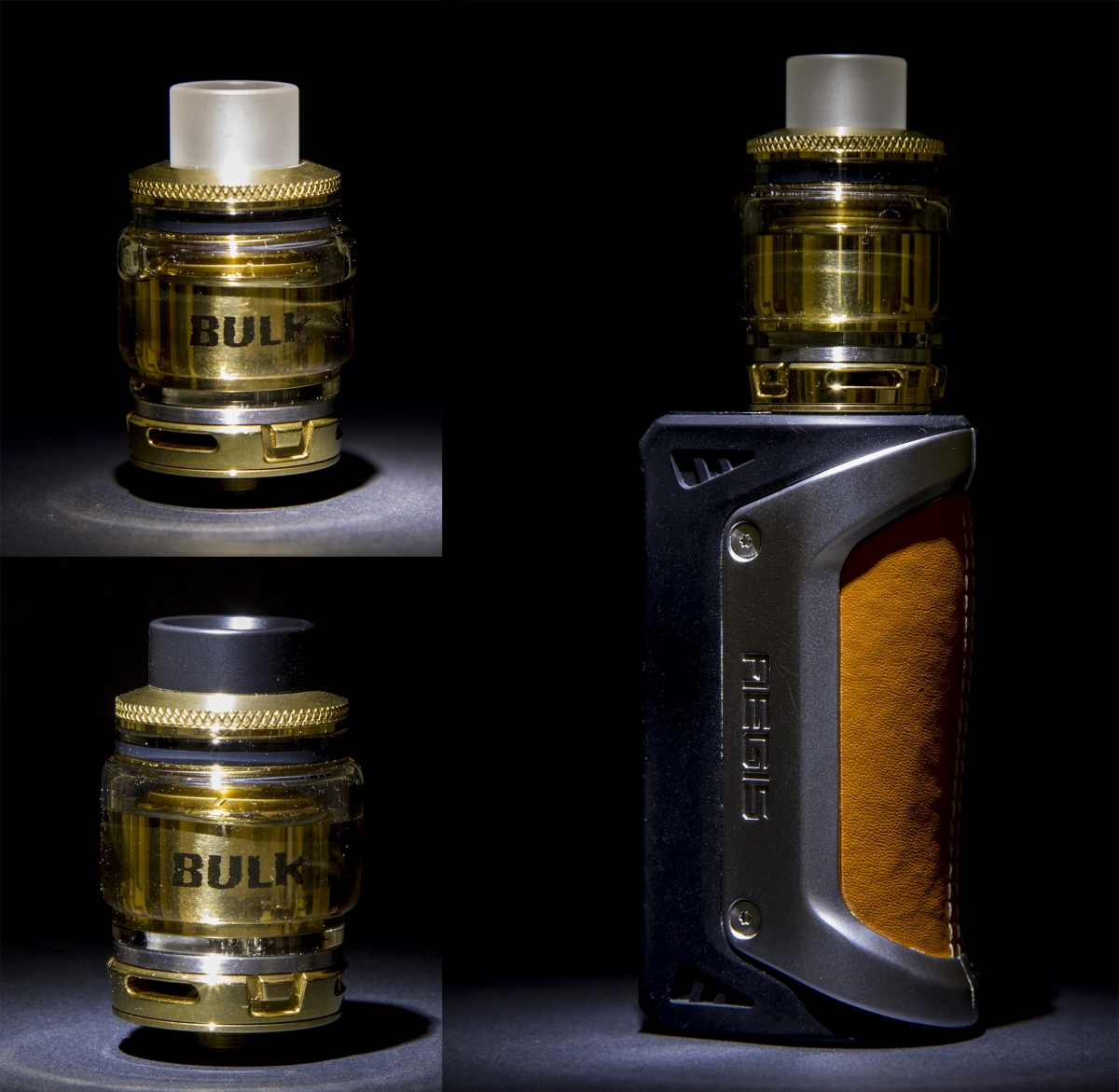 I thought the days of traditional RTA’s were over for me since I favoured Squonking RDA’s and latest tech Mesh Style stock coil tanks, the Bulk and the little Wasp Nano RTA have won me back into using RTA’s on a regular basis, don’t expect it to beat Mesh for flavour but it’s close to RDA’s and a different enough vape to add to your collection if you fancy a change, I highly recommend this RTA.
(this is almost the same final thoughts as the Wasp Nano RTA as it still applies)

It’s worth you checking out the official Oumier website for the Bulk, mostly images and animations but illustrates the airflow very well.