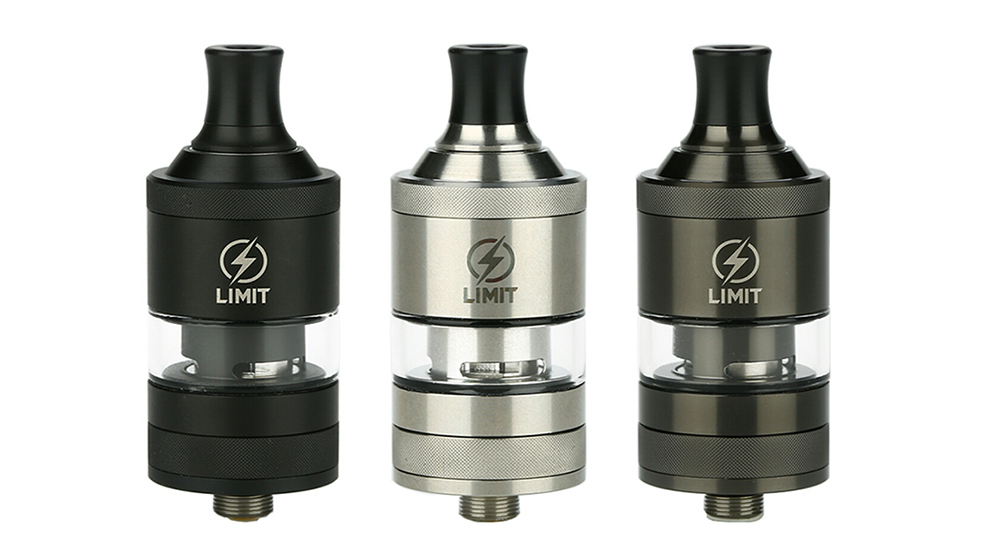 Thanks to Heaven Gifts for providing this product for review. These are my views & thoughts only. 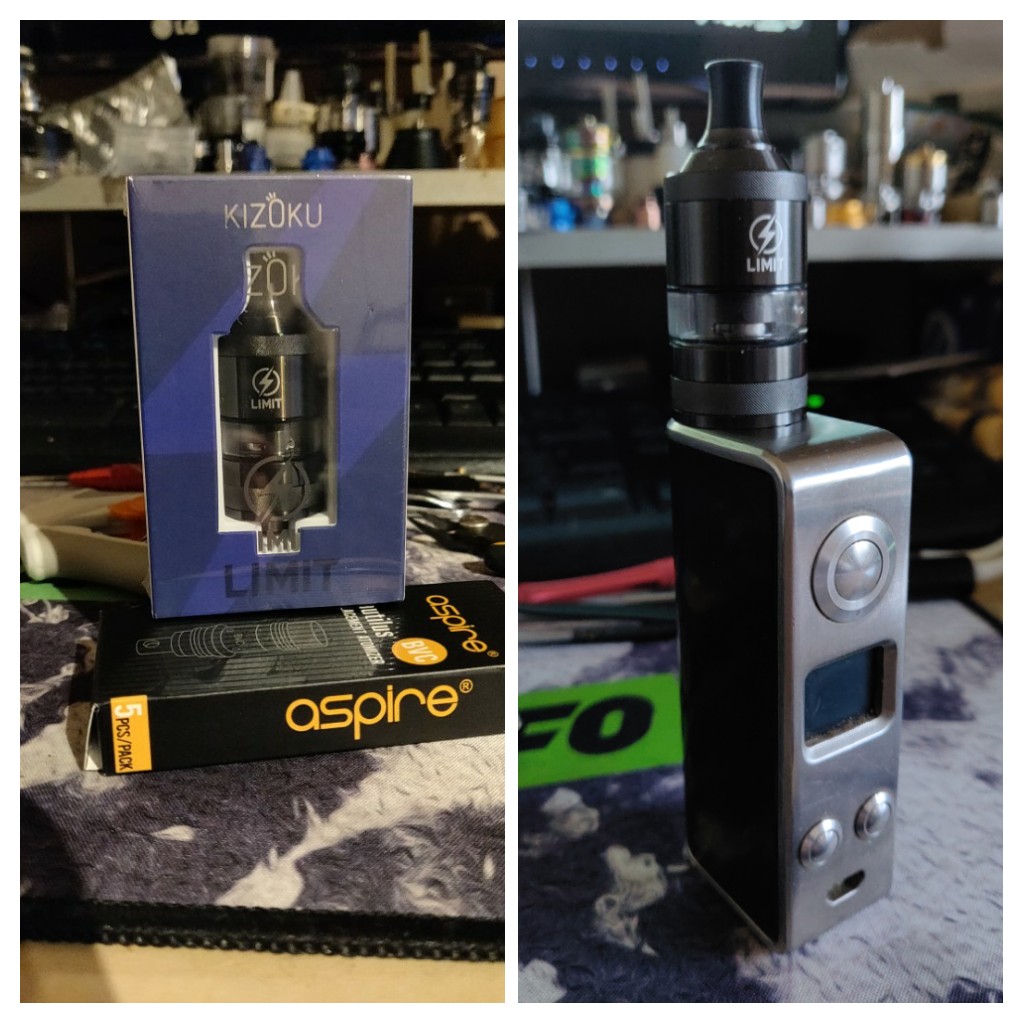 Lauded as the "First RTA with replacement coil", the Limit comes complete with a rebuildable coil which unscrews from the base to allow stock coils to be used, more on this later. So does it offer the best of both worlds or is it a compromise? 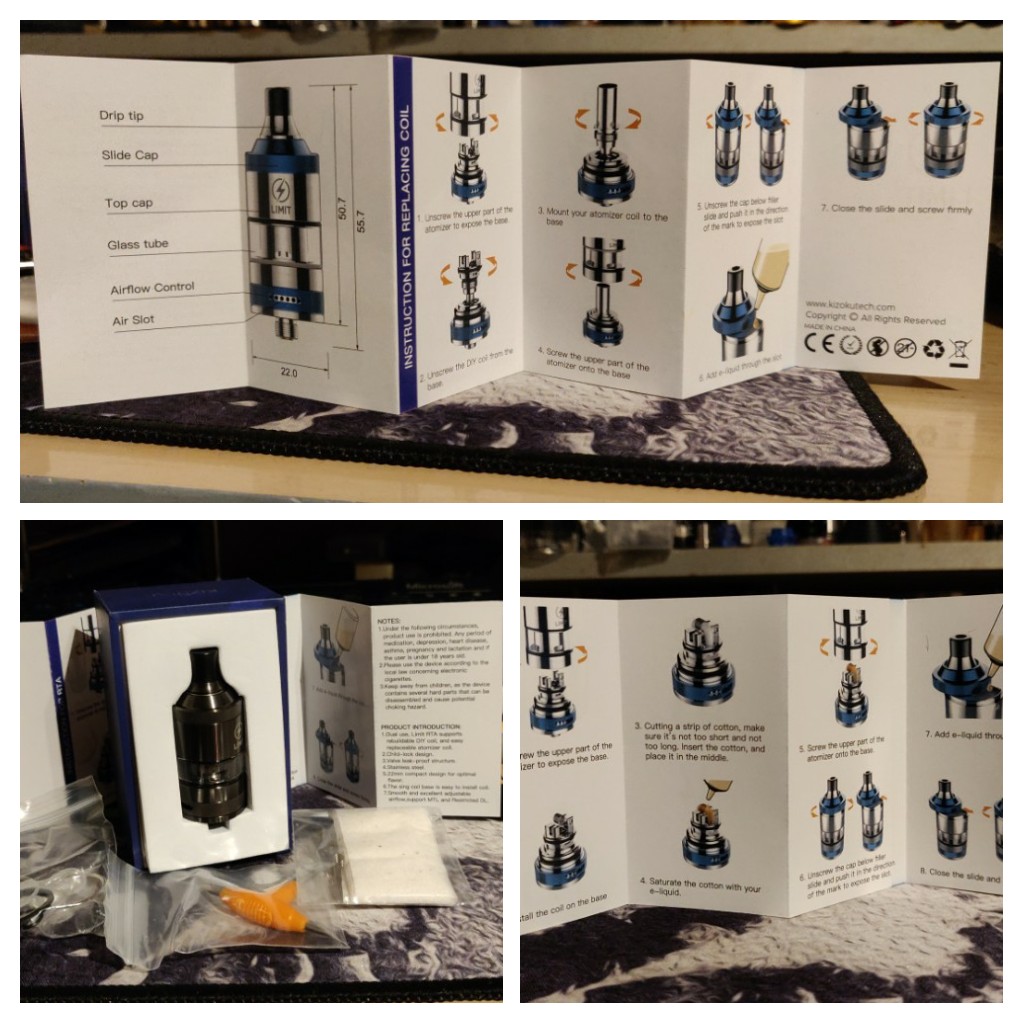 The Limit comes in a well presented package with Kizoku branding on the front and web address on the sides. The back has the specifications listed, 55.7mm x 22mm tank, 3ml capacity (TPD version 2ml). The review version is gunmetal, but black and SS colours are also available. Sliding the cover off reveals the Limit tank, and underneath is a user guide, a bag of spare O rings, screw, spare glass, tri headed T bar screwdriver, single coil and cotton. Oddly, being a dual purpose RTA, no stock coil is included. This means you will need to source stock coils unless you already have some Nautilus BVC coils. Fortunately Heaven Gifts supplied a pack of five 0.7Ω coils for the review.

As said previously, the Limit is supplied with the RBA deck. It is a two post set up with decent sized juice holes and under coil airflow. The way the post screws are set will require coils being wrapped reverse style. Although a coil can be set belly down, it’ll restrict airflow a touch more. The tank itself is well finished with just a lightning bolt and Limit on one side, and an arrow denoting direction to slide the top cap for filling.

Out of the box, I’m sure the Hulk must have been assembling this as all sections are mega tight to unscrew and I had to use my attie wrench to disassemble it. Airflow is adjustable from 1-6 airholes clockwise to cyclops style anti clockwise. At first the control ring was very tight to move but a complete breakdown allowed me to remove the ring and very lightly lubricate the O rings with a touch of VG. The ring moved a little easier but stayed in position fine, likely due to being flush with the base/body. It has a light gnurled pattern, but wasn’t easy to move when sat on a mod. The drip tip is standard 510, so easy enough to swap the supplied tip with a personal favourite, although be aware the top plastic section can be unscrewed from the 510 base. 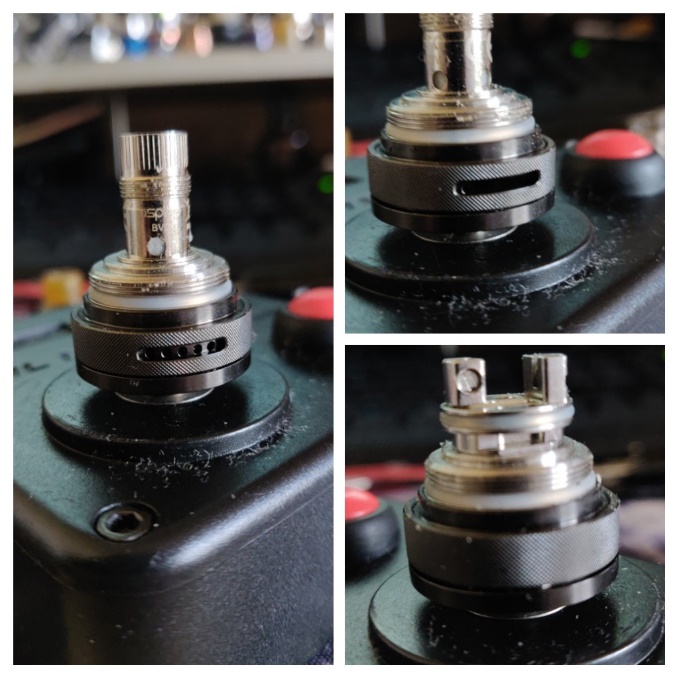 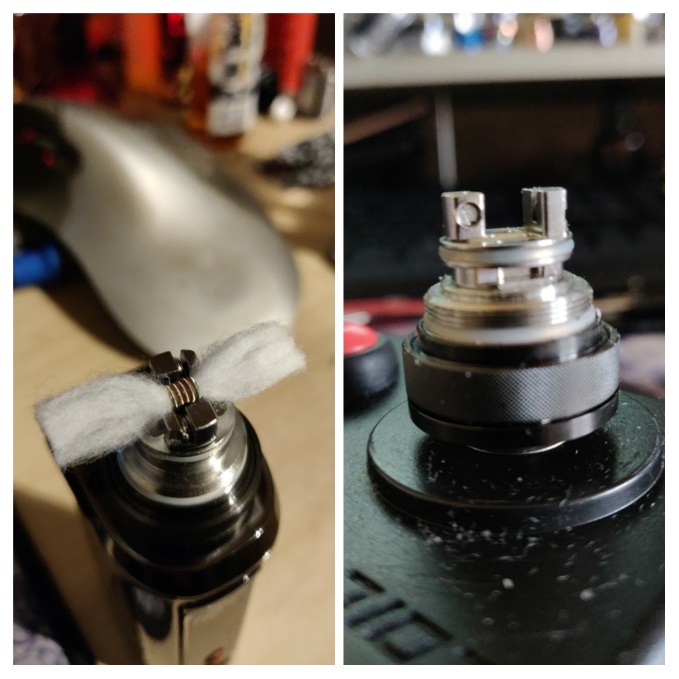 For the review, I used some MTL fused Clapton wire at around 0.8Ω. Wicking is straight forward, cut the cotton and thin the ends to feed into the juice well. Personally, on this type of deck, I have the cotton showing through and just touching the bottom. Once juiced up and reassembled, I found the first of two cons with this tank. The childlock system is fine, unscrew the top knurled ring until it stops turning & push the cap off as indicated by the arrow.

Now the first problem is the silicon gasket. 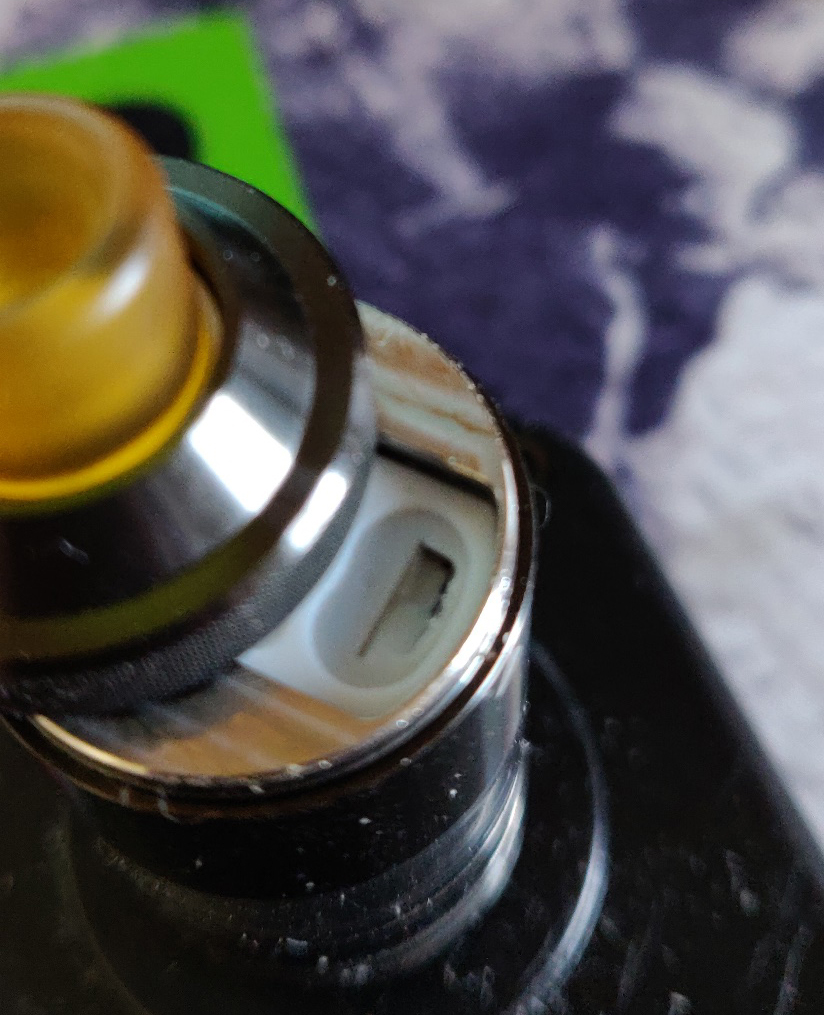 The juice fill hole is quite small and, even using thin tipped bottles, juice still collected on top, so having a tissue handy is recommended, and more juice is squeezed out when closing the cap. The second issue is you can’t actually see how full the tank is as the top half is metal and you can’t see through the gasket until juice is running down the outside.

On to the performance and I’ll admit I was pleasantly surprised with the flavour and clouds from this tank. Even using 70/30 juice, the wicking kept up fine. I started with airflow on it’s biggest setting and running around 17-18W it was an enjoyable restricted direct lung vape. Reducing the airflow and dropping power still gave a decent vape but more subtle clouds. Next build I put in was a 1.0Ω build to try the more restricted airflow on the 1-6 hole settings. Not being my favoured style, I was expecting a dulled flavour but again it was acceptable to me on 6 to 4 holes but below that it just became too tight for me to enjoy. I’d compare it to a Nautilus Mini on the largest hole. Wicking was more temperamental but that was just as likely because I only had 60/40 juice available and my vaping style meant I was pulling too hard and bordering on dry hit. With a decent 50/50 juice, a MTLer should be at home with this though.

Onto the provided stock coils. The supplied coils are Aspire Nautilus BVC rated at 0.7Ω rated 18-23W. Having a look round, any coil that fits the Nautilus/Mini/2/Triton should work including the new AIO Salts coil. Once primed and left to soak for five plus minutes, I started at 16W, wide open and gradually increased power up to 22W and again flavour and clouds were very decent. Flavour was slightly dull against the RBA coil, but I get that generally with any tank that has a deck as an option to stock coils. On the 1-6 hole setting, power had to be dropped to around 14W on 6 holes and, in my opinion, wasn’t as good but this would likely be improved using a dedicated MTL coil. Going back to full open, I have happily put 6-8 refills through the coil and had no noticeable drop off in performance.

All in all, this is a decent attempt at a dual purpose RTA/stock coil tank that works rather well. It performs equally well with your hand/pre built coils, allowing you to tailor the vape how you want it, and the ease of use with a decent range of stock coils was a plus. Apart from the highlighted issues of the gasket and metal tank section, there is little wrong with this set up. I’ve had no leaking in either format and have been happily using it in scenarios where cloud chucking wasn’t ideal. One thing I would have liked is the ability to swap formats on the fly, but being only 2/3ml it’s not a necessity, just me being lazy.

For around £25/$30, this is a fair priced tank, but remember to factor in the costs of stock coils. Although judging by my usage, two weeks plus would be decent life, obviously dependant on types of juice used.

Many thanks to Heaven Gifts sending out the Kizoku Limit for review. 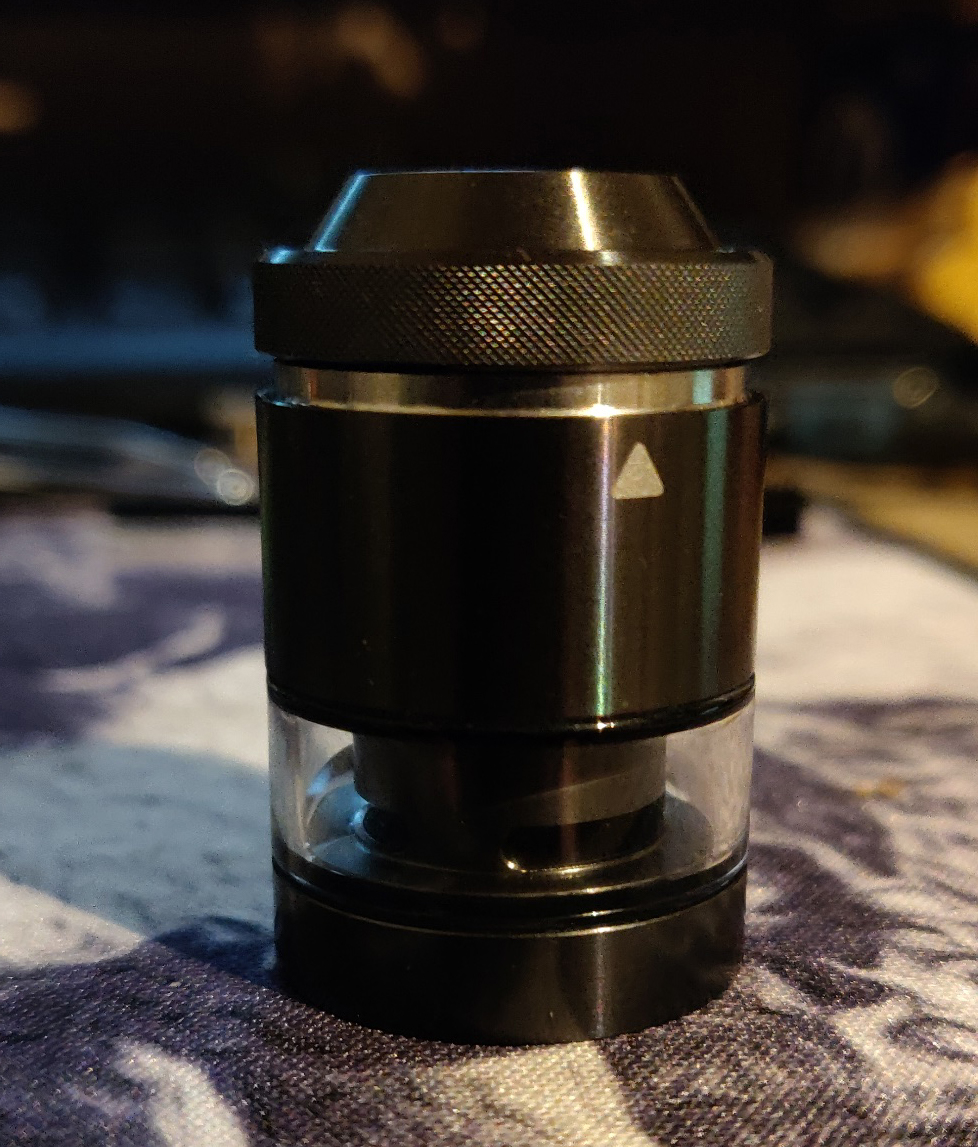