Hellvape got in touch and asked if I’d be interested in taking a look at their new mouth to lung (MTL) rebuildable, the Vertex RTA. With my renewed interest in MTL vaping during lockdown, I was more than happy to oblige. 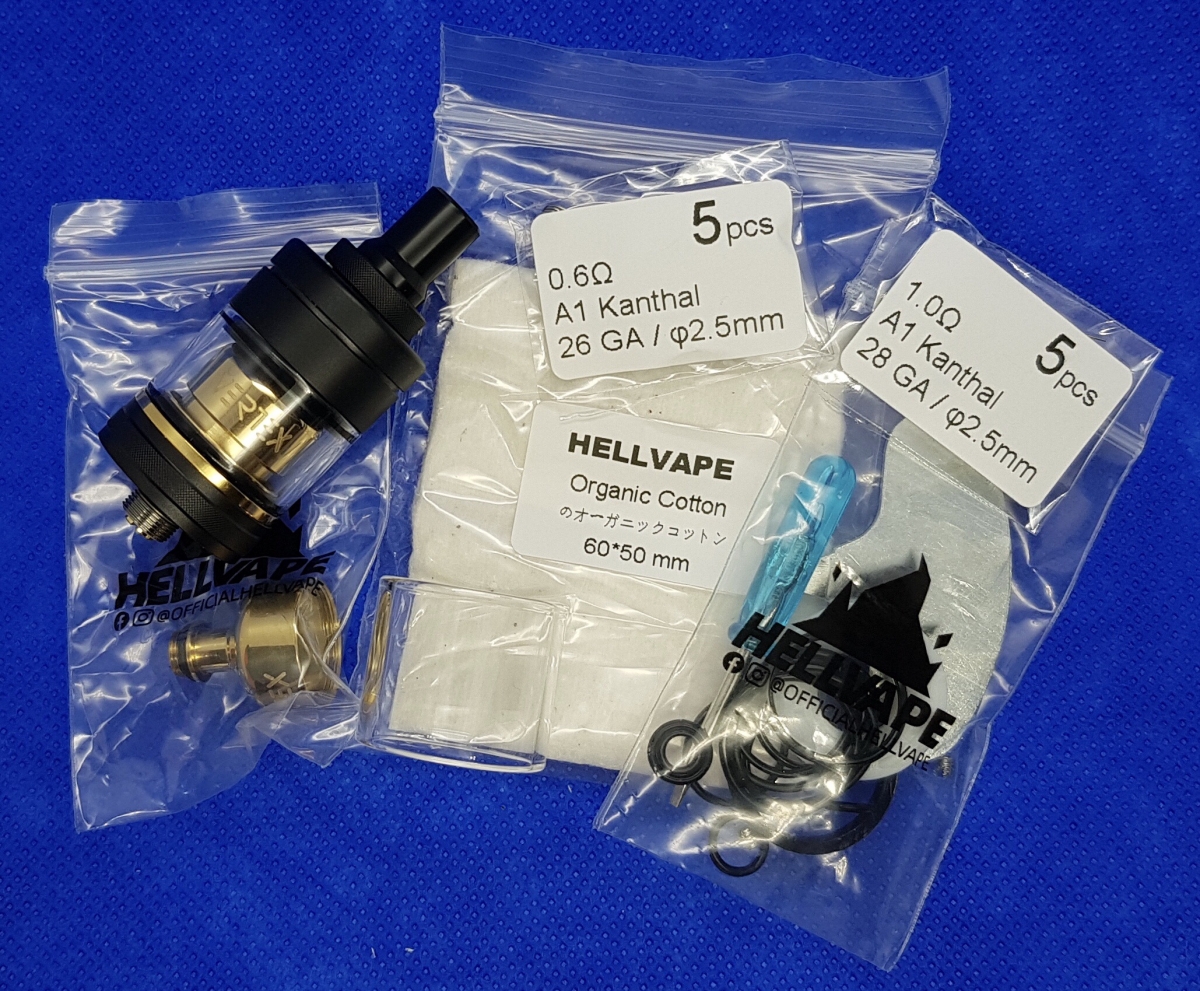 The Vertex RTA is available in four colours (matt black, stainless steel, gunmetal and finally black and gold). I was sent the black and gold version for review, I’m not normally a fan of gold tanks but the contrasting gold band and chimney section used here really sits well with the slightly matt black finish so first impressions were very good.

There’s quite a lot included in the box as well with two different chimney/glass sections, ten premade kanthal round wire coils, spare o-rings and cotton. In short, there’s pretty much everything needed bar e-liquid (and a mod of course) which is always nice to see and bonus points for stating the coil material used as well. 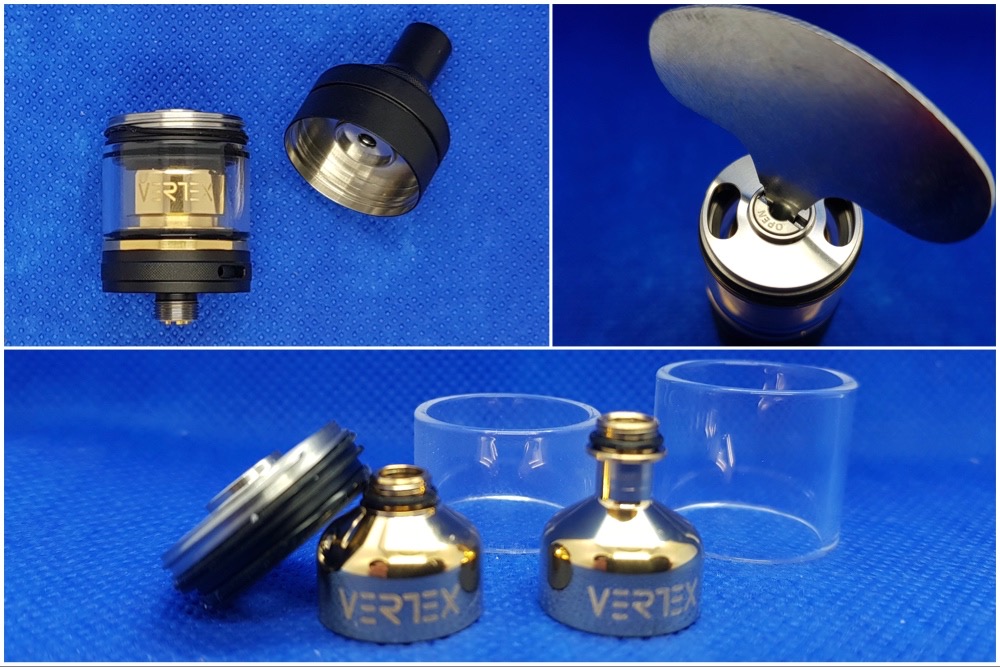 The Vertex RTA comes out of the box with the shorter 2ml glass fitted. Swapping to the larger 3.5ml glass and chimney section is easy, the chimney section is locked in place by a reverse threaded screw at the top which is simple enough to remove with the supplied tool. You can also see the two generously sized fill ports from here as well, which means filling has been a mess free experience. What the eagle eyed amongst you may have noticed though is that there is no sealing gasket in the fill cap…. mine didn’t come with one fitted, luckily there’s a spare included but I wouldn’t sweat it too much as I ran it for two days before I realised and it didn’t leak a single drop anyway! 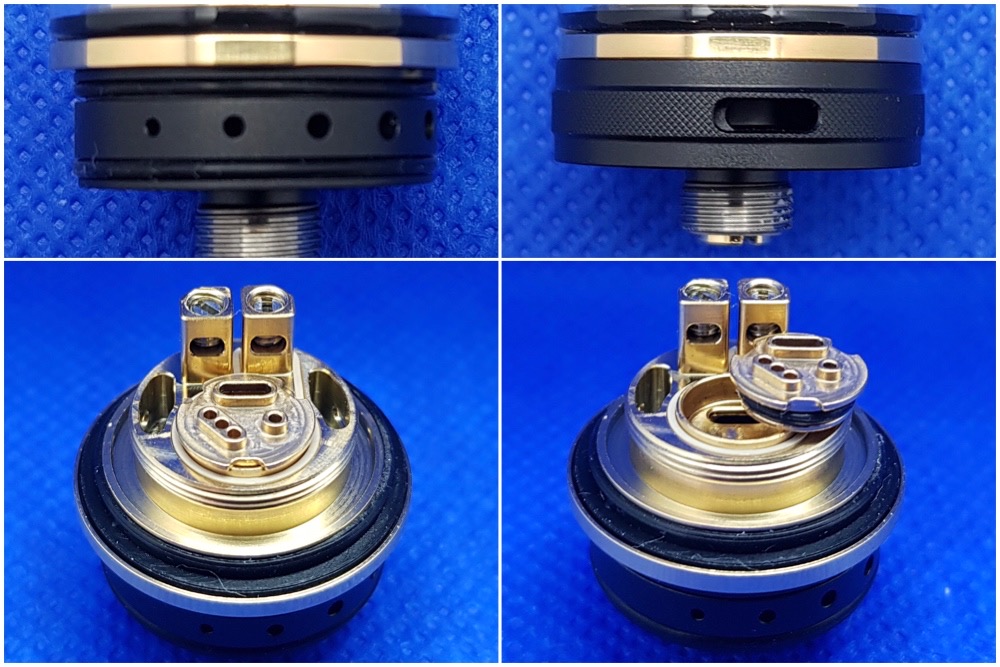 You get airflow options galore with the Vertex RTA, there are five MTL airholes (0.8, 1.0, 1.2, 1.4 and 1.6mm) on one side and a larger 1.7x5.8mm cyclops airflow on the other side. However most MTL aficionados will tell you that what really counts is the airflow directly under the coil, and here you have three options available on a turntable system, a single 0.8mm air hole, three 0.8mm air holes and a larger 1x3.2mm airflow for a restricted direct lung vape. This has been easy enough to adjust in use although it should be noted that it’s only held in place with an o-ring. It hasn’t budged out of place in the two weeks I’ve been using it, but I perhaps wouldn’t feel comfortable using this on a mech mod just to be safe. 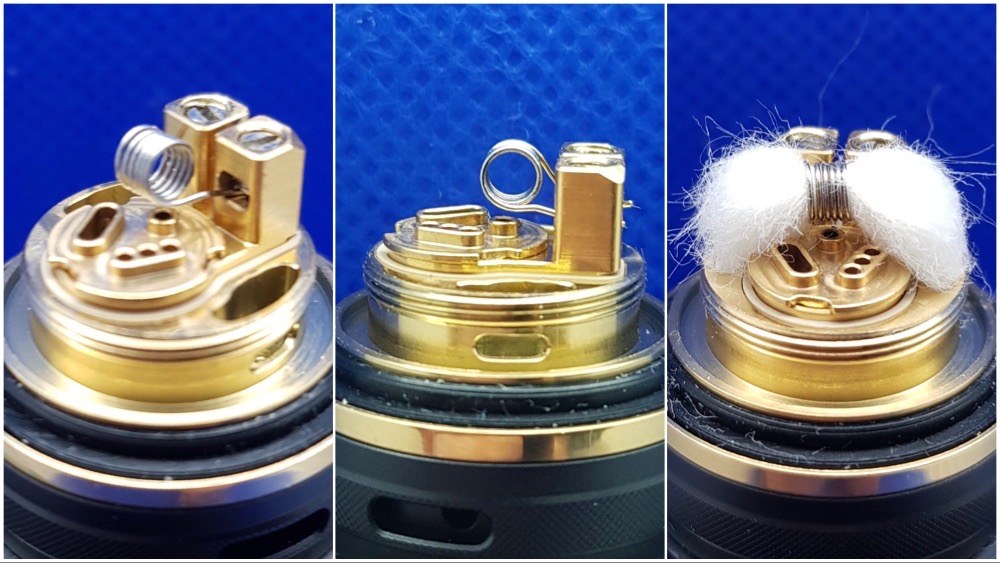 Building was a doddle with a standard two post configuration, just be sure to pull the coil a little way out from the posts so that it’s positioned above the airflow as shown above, and there’s plenty of room at the back to clip your leads so shorting out against the chimney shouldn’t be an issue. This is obviously more suited to small builds but the airflow probably isn’t up to super sub ohm monster builds anyway, and you can still easily fit a small fused clapton or alien coil here if you want.

The wicking ports are relatively small but they are up to the task as I didn’t encounter any wicking issues even once I’d fitted a small fused clapton and run the tank in its restricted direct lung mode.

With the combination of the outer airflow adjustment and the under coil turntable system, you can really tailor this to your favoured vape style. With the single 0.8mm under coil airflow I found it a little tight for my personal preference but I was pleasantly surprised by the flavour, switching over to the three 0.8mm airflow setting was much more to my liking and I’ve had a stellar time with this. Switching out to a small fused clapton (0.5ohms) and the 1x3.2mm under coil airflow also gave a great restricted direct lung experience as well with bags of flavor.

I’ve found the included 510 drip tip has worked well, even in the restricted direct lung mode, so haven’t felt the need to change it out but you have a nice flat platform up top which means you should be able to use any of your own drip tips if you choose.

This is the first product I’ve taken a look at from Hellvape, and I have to say I’ve been suitably impressed. The build quality seems good and there are lots of goodies included in the box. Building was easy and I’ve had a consistently good vape out of this with no flooding or leaking, and the airflow has been super smooth across the board. If you’re looking to get into rebuildables then this would make a good starter tank to try out.

Many thanks to Hellvape for sending the Vertex RTA out for review. 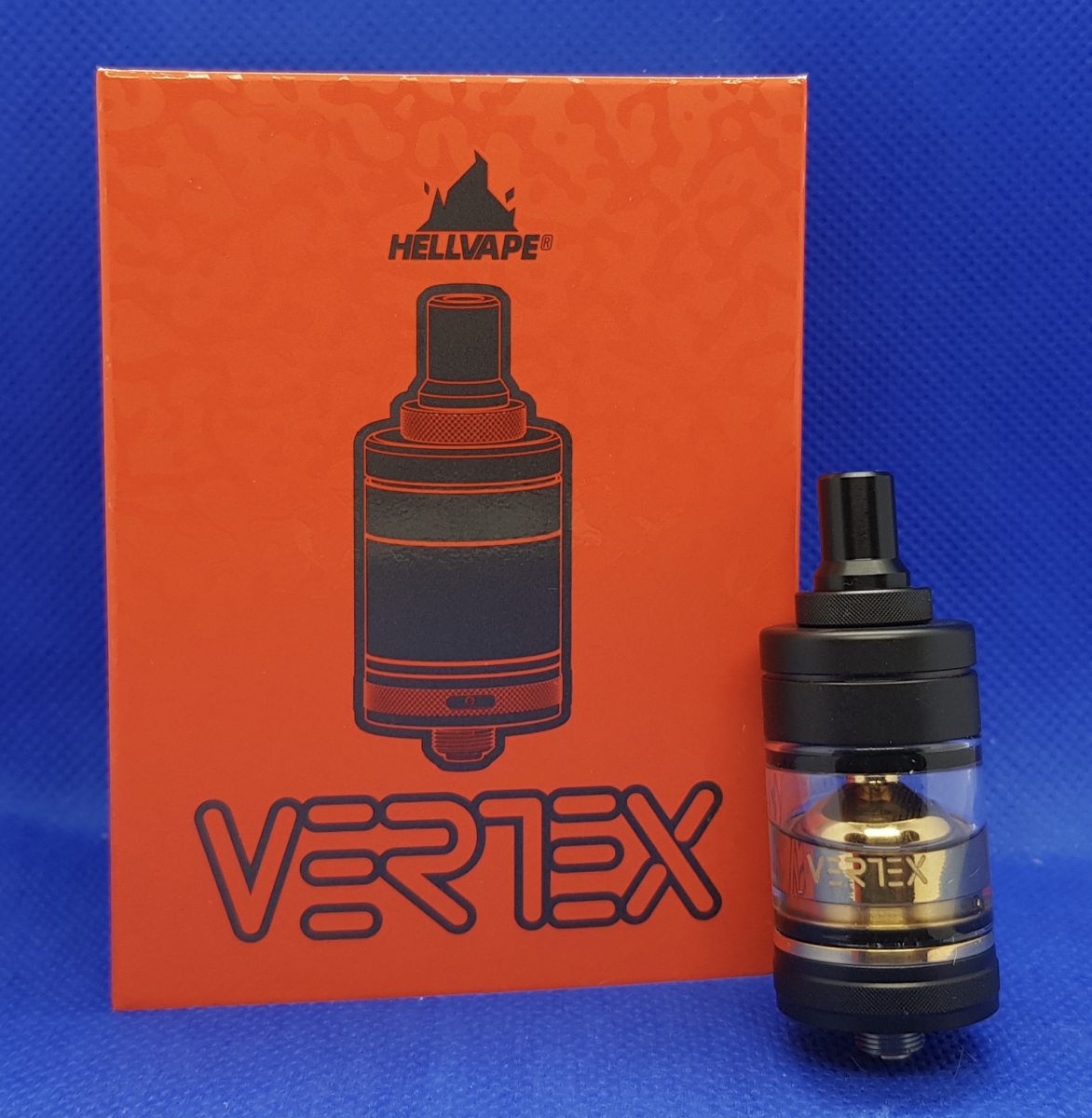