Hellvape have sent out their latest creation, the Helheim S RDTA, for us to take a look at. Developed with a new German team called “five”, it certainly has a very Germanic feel to it as it’s quite a tall tank (even for an RDTA) and uses stainless steel cables for wicking which are both hallmarks of tanks developed in Germany in the past. 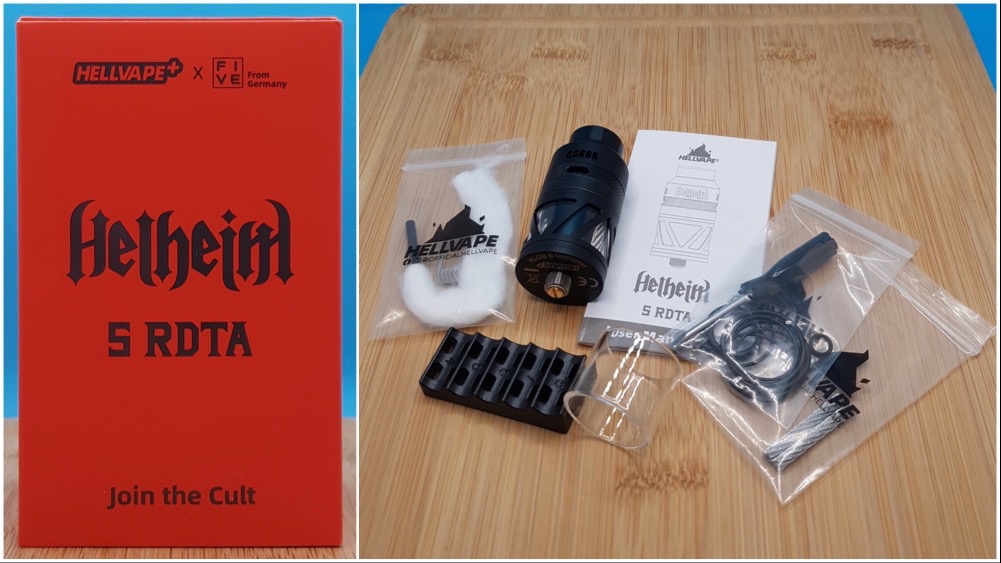 As usual the pack ins from Hellvape are quite good with a spare glass tank (UK TPD editions only have one 2ml “glass”), a bag containing a screwdriver, spare O-rings and deck screws, a second bag with spare stainless steel cables, another bag with a ni80 fused clapton and cotton, and finally a coil cutting guide. The Helheim S RDTA is available in five colours and I was sent the black and stainless steel versions to test, with gunmetal, gold and blue rounding out the available options. 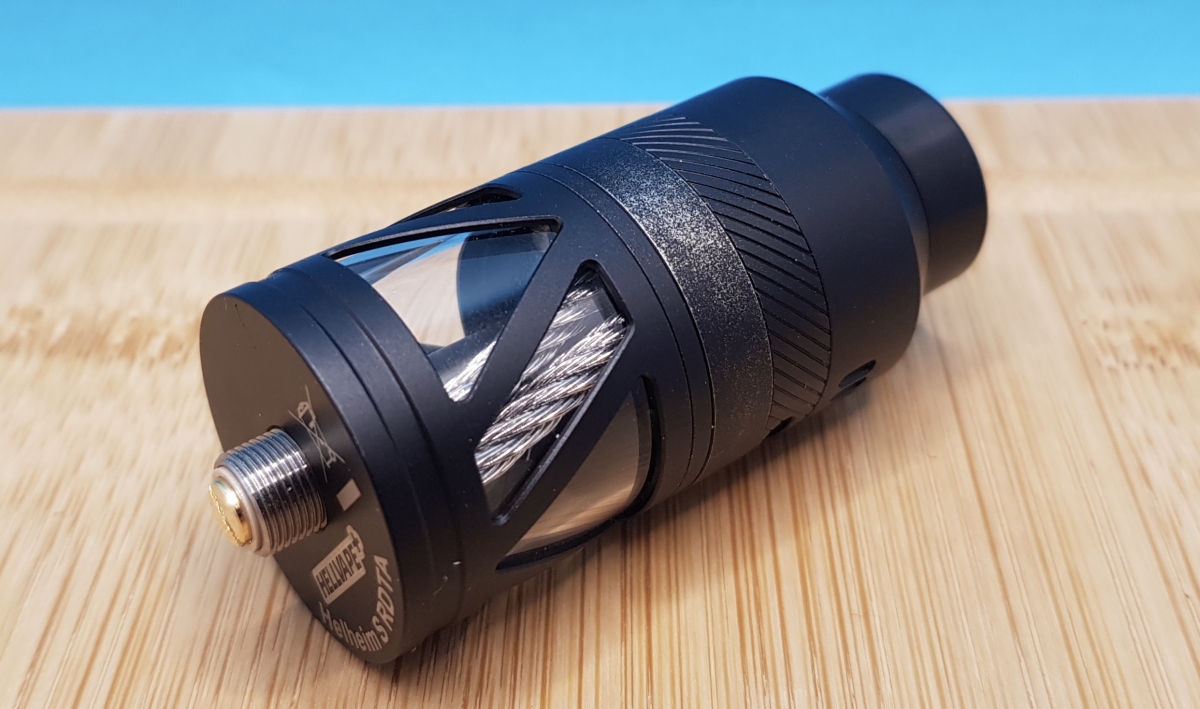 I opted to go with the matte black version although I was slightly disappointed by the finish on the bottom of the top cap as you can see in the photo above. I haven’t encountered this on Hellvape products previously and this could well be down to it being from an early pre-production run so yours shouldn’t have the same issue, and the finish on the stainless steel version is flawless.

Up top, you have a standard 810 drip tip and dual side and bottom airflow adjustments along with a rather understated Helheim logo. Down below is a large 5ml glass encased in a rather stylish metal cage to protect it from accidental knocks, and you can also see the four pre-installed stainless steel cable wicks. Two extra stainless steel cables are included in the spares package which does feel a little odd given that the tank utilizes four wicks, but no doubt spares packs will be available at some point down the road. 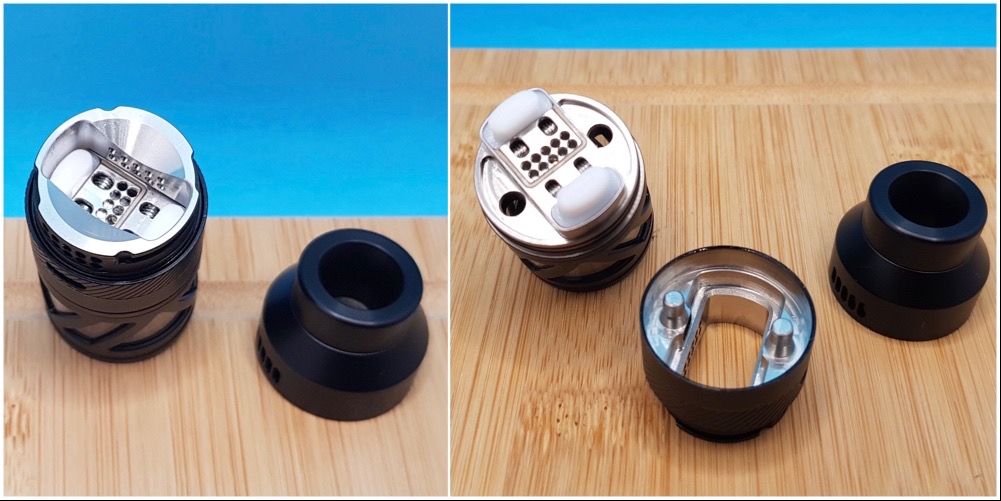 Taking the top cap off, you can see that the side airflow actually comes right into the build deck and creates quite a small chamber, the honeycomb side airflow ports are actually angled downwards as well to try and force the airflow down under your coil. The upper airflow ring is on a latch system and can only be removed by turning it all the way to the right before lifting off which is a nice touch.

The lower portion of the top cap lifts off to fully expose the build deck, under coil honeycomb airflow and fill ports. The O-rings here could perhaps have been beefed up slightly as it’s a teensy bit loose, it’s in no danger of falling off but I wouldn’t make a habit of picking this up by the top cap! To protect the pre-installed cables, two rubber bungs are installed in the wicking ports, I’d perhaps suggest keeping these once you remove them in case you want to put the Helheim S RDTA in storage for a while.

Should you need to replace the glass or the cables, these can be accessed by unscrewing the bottom cage. This was rather tight on the black version and required extra bad language and a pair of rubber gloves to budge it the first time around, but I had zero issues with the stainless steel version. There’s a nice hybrid safe 510 connector on the base but I have to say I was slightly surprised that an optional squonk pin wasn’t included here, not that it’s much of an issue with this 5ml international version, but it would have been a nice inclusion for the 2ml UK TPD setup as that doesn’t seem to include a 5ml glass tank in the box (check with your local vendor before purchasing). 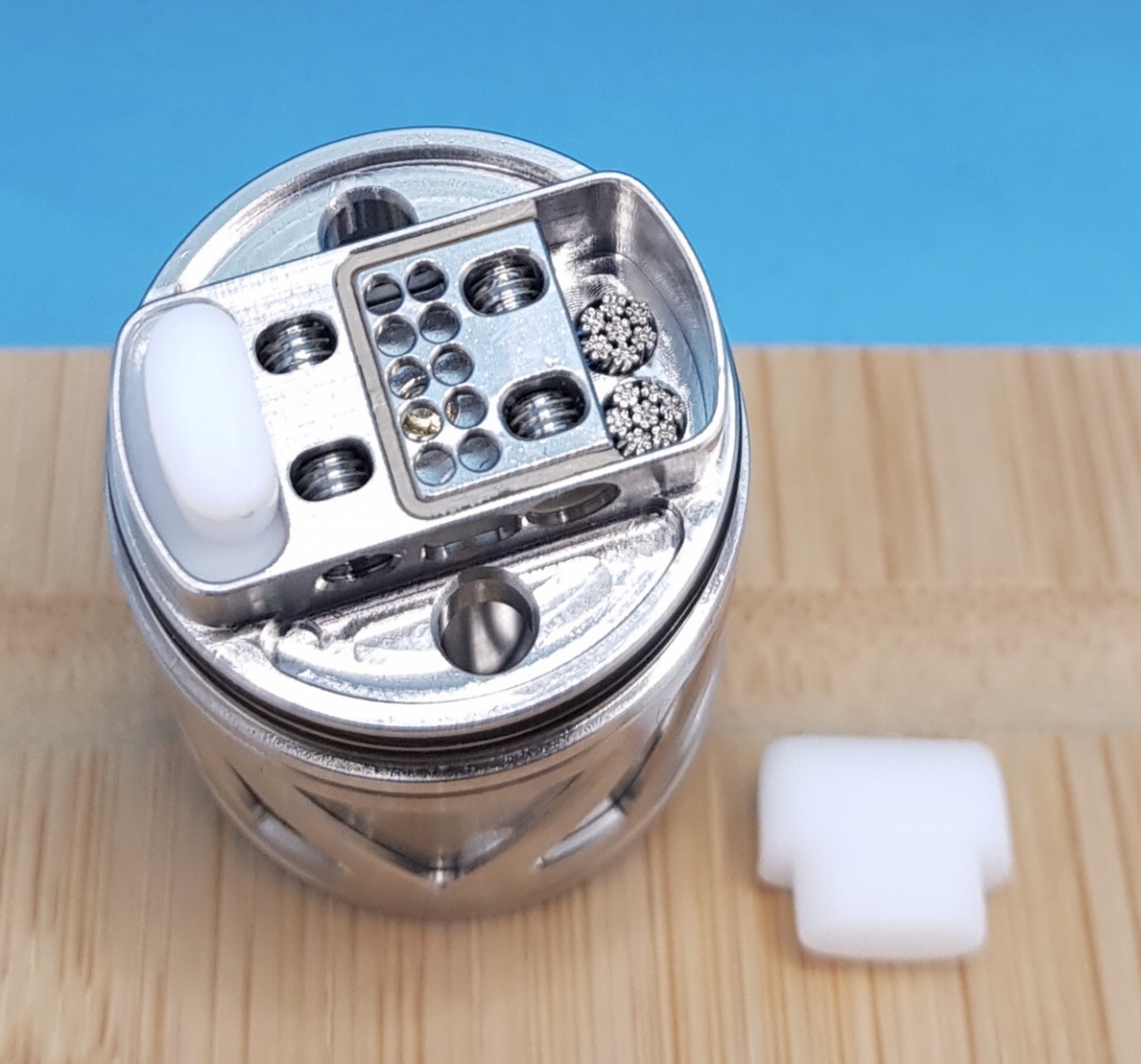 The build deck uses four flat head screws so you can use coils wound in either direction, you could in theory cram a dual coil build in here but due to the condensed nature of the build deck with the top cap in place, I suspect that would be rather a challenge for anything other than simple round wire builds so I stuck to the suggested single coil configuration. As is typical these days, the included coil is ni80 so I can’t use and opted to install one of my own Kanthal fused claptons instead with the legs cut to the suggested 5 mm length on the included coil cutting guide.

Installation was a doddle with the large flat head screws. For the wicking, I cut it at around 1 cm from either side as shown so that the wick tails then sit just on top of the wicking cables in the generously sized wick ports.

With everything now setup and a final build of 0.3ohms, I started to play around with the power and airflow settings to find my sweet spot. I eventually settled on 60 watts with both airflows about two thirds open. This gave me great flavour and the wicking seemed to keep up which was something I was concerned about having never used stainless steel wicks like this before. Mightily impressive considering that I was using an 80VG e-liquid, however it did seem to struggle to keep up if pushed much beyond this, but with regular 70VG you should be able to push things a little further and things seemed to improve after a few hours, presumably as the steel wicks became fully saturated.

On the downside, it will flood slightly if laid on its side as most RDTAs are prone to do, so it's probably best if you try to keep this upright as far as possible. Having said that, I haven’t encountered any full blown leaks. As you might expect with dual honeycomb airflow, it’s all super smooth as well with no unwelcome whistling or turbulence at any setting.

Another nice option from Hellvape if you’re into single coil rebuildables, the Helheim S RDTA shows that there’s still room for a good RDTA in the current market. The single coil deck means that you don’t need to absolutely hammer this with tons of power either to get a nice saturated and flavourful vape. Coupled with the smooth airflow on offer here, the more time I spent with this, the more impressed I became.

Many thanks to Hellvape for sending out the Helheim S RDTA out for review. 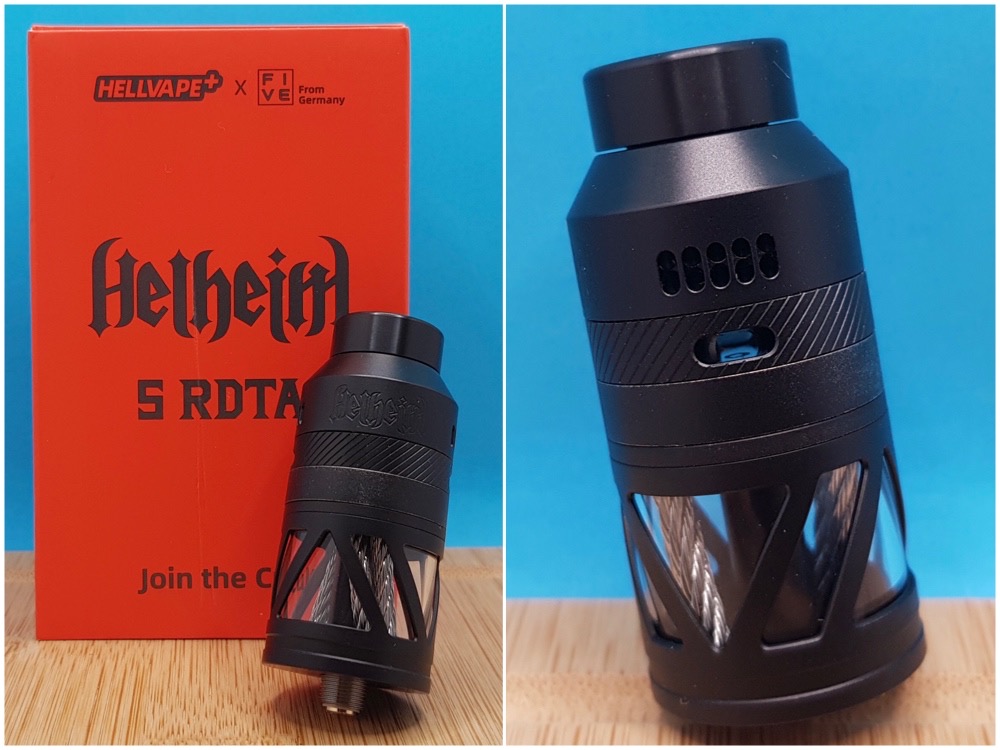