Hellvape got in touch again recently and asked if I’d be interested in taking a look at their upcoming RTA. They were suitably vague as usual at this point but I’ve had good experiences with Hellvape products in the past including their rebuildable tanks and RDAs, so yes I’m more than happy to take a look. Skip forward a few weeks and the Dead Rabbit R Tank is announced which Hellvape are touting as a “unique mesh rebuildable tank”. It’s certainly different from most RTAs but it’s also got me intrigued as to how well this will perform so let's take a closer look. 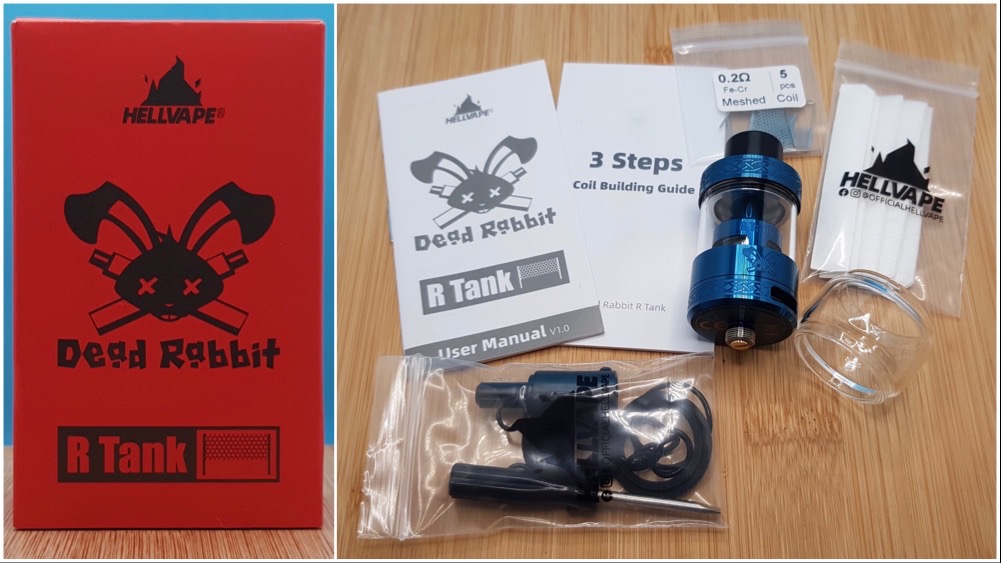 The Dead Rabbit R Tank is available in seven colours and I was somewhat relieved to receive a nice anodised blue version as I was dreading being sent a gold or worse a rainbow one (shudder). This arrives in typical Hellvape packaging and you actually get quite a lot included in the box. 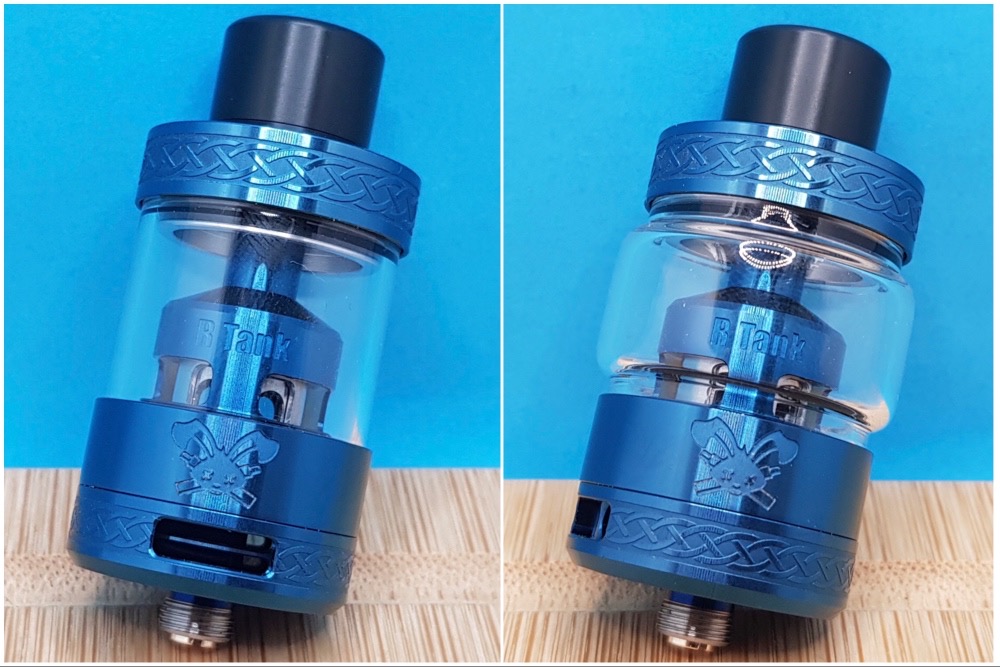 In this international version that I was sent for the review, there’s a 5ml straight glass pre-installed along with a 6.5ml bubble glass. As the straight glass has 5ml capacity, I decided to go with that for a cleaner look but it still looks decent with the bubble tank installed. TPD editions will obviously come with a 2ml tank (which I’m assuming will be one of those ridiculous thick walled affairs). Be careful when ordering though as there are two TPD editions and the “UK TPD” version doesn’t come with a bubble glass in the box, check with your chosen vendor before purchasing. Hopefully spare/bubble tanks will be made available separately at some point for the UK market.

The tank section can be stripped down for cleaning or to replace the tank as well.

It’s quite a clean looking tank and carries over some of the design cues from earlier fat rabbit tanks like the Celtic knot motif on the airflow control and top cap. There’s a nicely protruding positive pin as well, although I’m not sure I’d personally be too keen on the idea of using this on a mech. 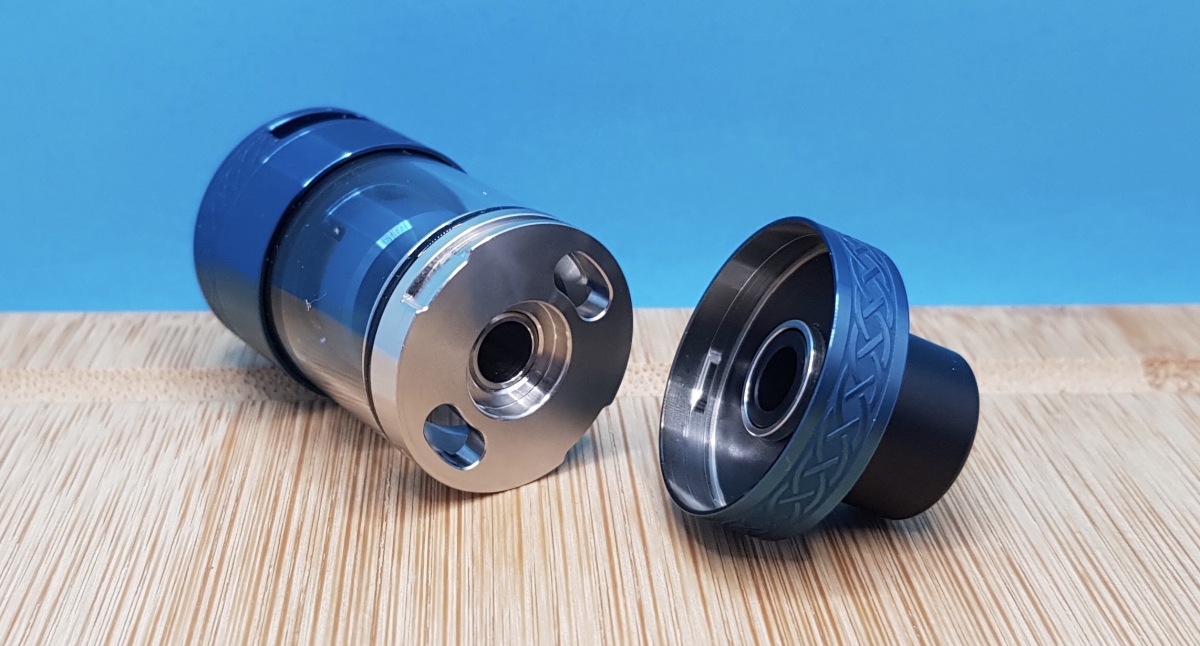 The top cap has a quarter turn bayonet fitting with a large gasket in the top to keep everything sealed, this is easy to open and the fill ports are more than generous enough to allow easy mess free operation. Putting the top cap back on can be a little more fiddly as you have to line up the lugs with the top of the tank, through experimentation I found that the quickest way to do this is to backwind it until you feel the cap drop into place and then twist to lock it shut. Hellvape have opted for a standard 510 drip tip here and I’ve found the supplied one to be quite comfortable, there is a slight slope to the top though so wider drip tips may not work too well. 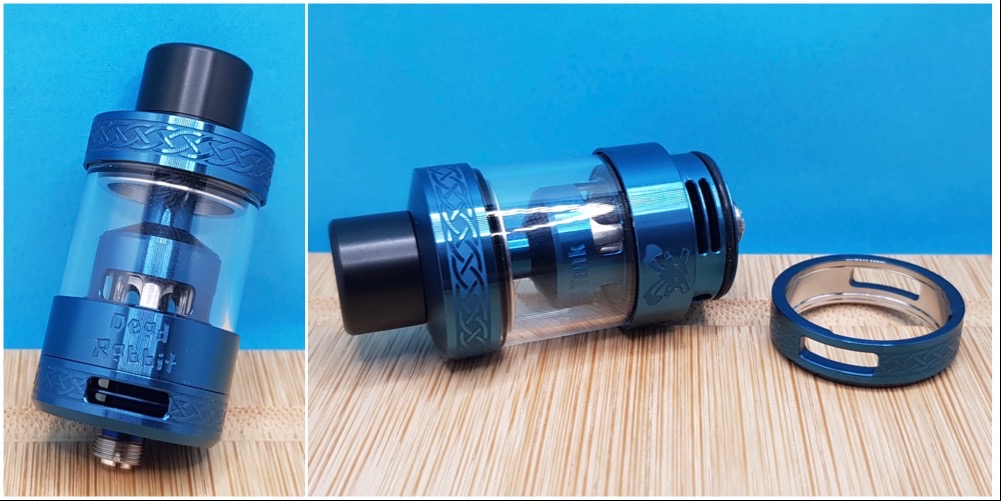 The airflow control (AFC) has two large cyclops intakes with a baffle across them which I presume are there to smooth out the airflow or reduce any potential whistle, and the AFC ring can be removed for cleaning as well. 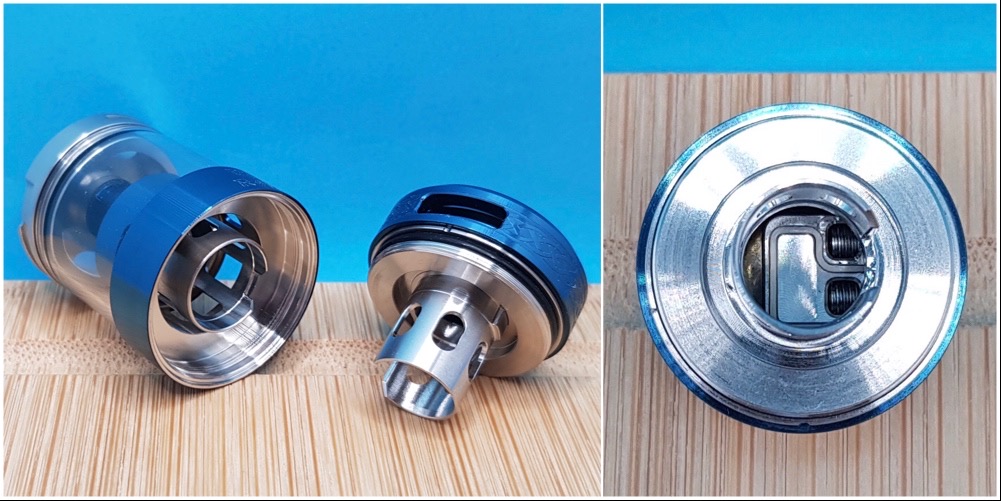 Once you remove the deck from the rest of the tank you may be a little perplexed if you were expecting a standard RTA layout as there’s a large cage sticking up from the base and the deck itself is buried deep in the bowels of the AFC section. Take a closer look and you soon realise that this in fact looks more like a rebuildable stock coil than a traditional rta and you’d be right because that’s exactly what’s going on here. So how do you access those screws, well you turn the AFC all the way to the right and voila, there they are! 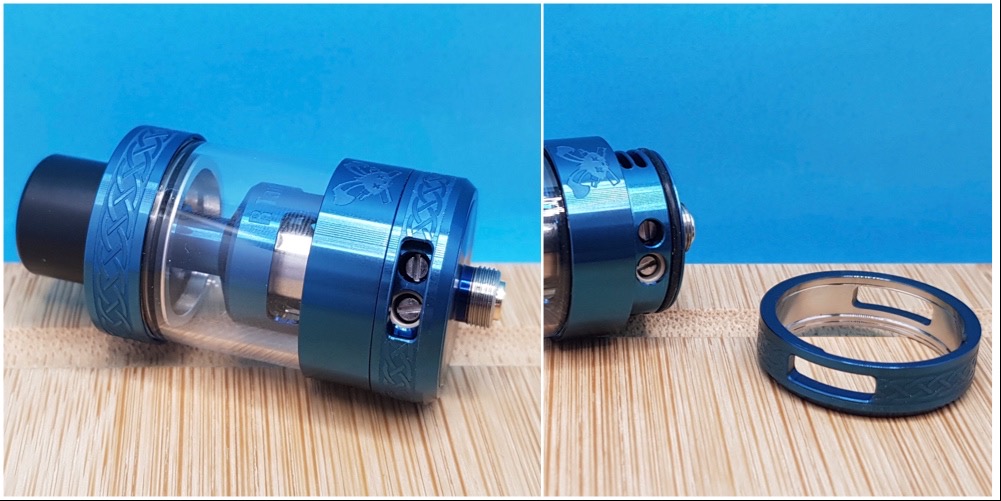 They’re actually quite easy to get to with the supplied screwdriver but if you find yourself needing a little more clearance, you can of course remove the AFC. This is quite a clever design as it reduces the overall height of the tank whilst still allowing easy access to the screws. 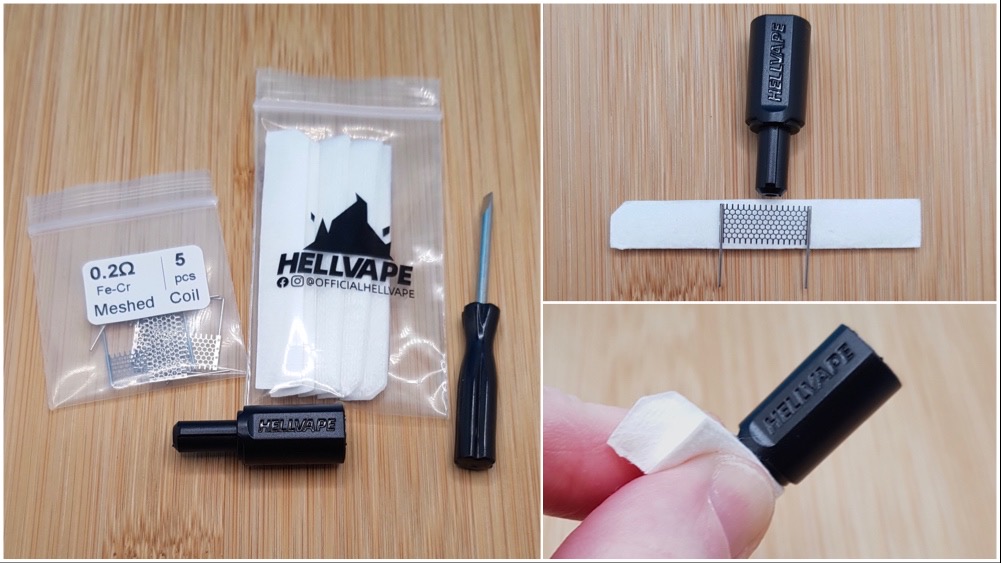 I’m pleased to see that Hellvape chose to go with kanthal mesh coils here as there’s only currently the one 0.2ohm option available, you get a very generous five coils and cotton strips included in the box to get you started as well. Building is exactly the same as a stock coil rebuild, place your coil on the cotton stip (with the cut corner to the top left as shown) and then place the coil tool with the Hellvape logo facing towards you which allows you to properly locate the coil legs which have been conveniently cut to length, and pinch it tightly around the coil tool. 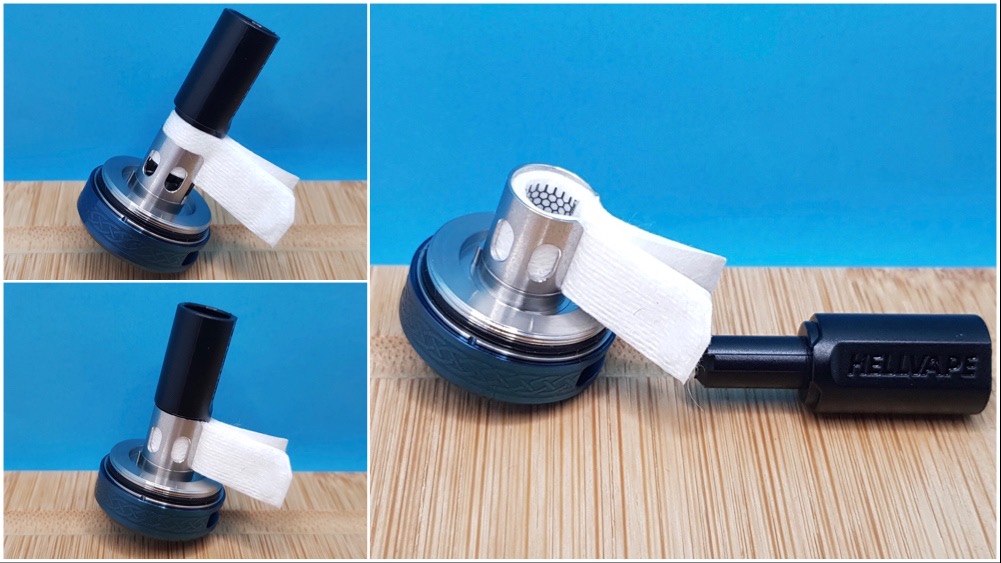 You can now wiggle the coil assembly into the build deck and pull it down until it sits in place before removing the coil tool. This is a good time to take a peek down into the base to make sure that your coil legs are properly positioned before tightening the screws down. 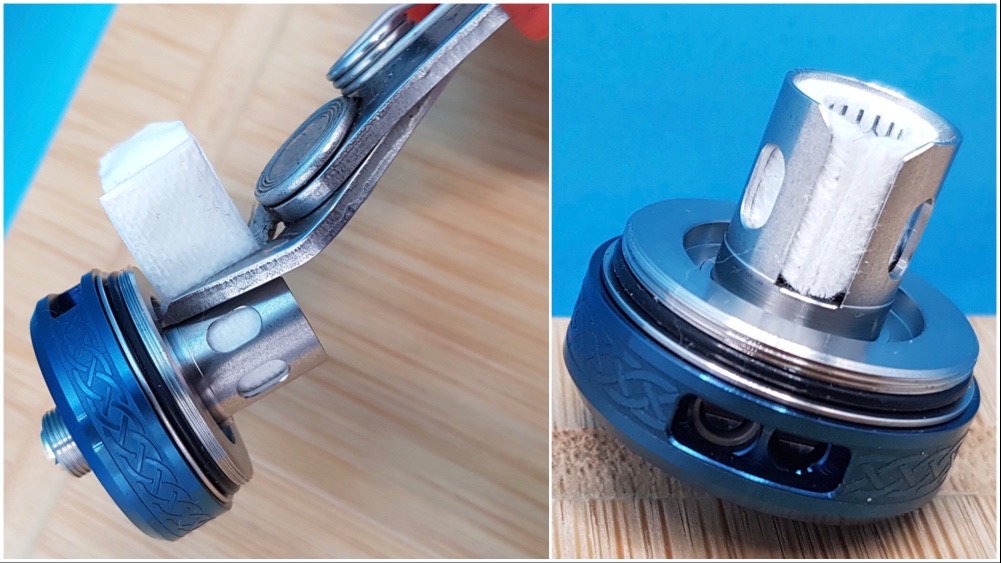 Hellvape recommends using wire snips to now cut the excess cotton, and you should now end up with something that looks like a stock mesh sub ohm coil. Check for any gaps at the base of the cotton, you can see here that I did have a small gap but fluffing the edge of the cotton a little with some tweezers solved that issue. I’d recommend at this point pre-saturating the wick as you would with a stock coil before screwing the tank back on and filling and perhaps letting things sit for a minute or two to really let the cotton saturate properly.

Firing this up for the first time I was initially a little disappointed with the flavour but that turned out to be a combination of a slight break period for the cotton and, as it turns out, some slightly crap e-liquid. Once I’d changed e-liquid this really started to pop. The coil is rated for 50 to 60 watts and I found it was better towards the upper end of this scale. I was even able to push it up beyond 70 watts but with no discernible improvement in flavour so I finally settled on 58 watts as my optimum.

The airflow is fairly smooth with no whistle but there’s that distinct hiss that anyone who regularly uses stock mesh coils will be familiar with. Closing the airflow down didn’t really seem to help and if anything muted the flavour so I’ve been running this fully open.

Coil life will obviously vary depending on how much you vape and the sort of e-liquids you tend to use. I got about a week out of my first coil which is comparable to a stock coil.

The Hellvape Dead Rabbit R Tank isn’t really an RTA in the traditional sense and sits somewhere in an awkward middle ground between a sub ohm stock coil tank and an rta. It might make a good stepping stone for someone looking to move from a stock coil system where they lack the confidence to do so though. As this shares many features of a rebuildable stock coil, it’s a vast improvement over a “traditional” mesh rta which requires boatloads of cotton, is difficult to build, and will dry hit like crazy if you get it wrong.

Coils seem to be inexpensive, I’ve seen them offered online for as little as £4 but haven’t been able to find them on a UK retailer at this point. I’d expect this to be perhaps around the £5 to £6 mark which would hold up to their 75% cheaper claim over a stock coil system. There’s less waste than a stock coil system as well for the more environmentally friendly minded amongst you (which is something that’s sparked a lot of controversy on the forum of late with the rash of disposable pod systems being released).

So the million dollar question is: Is this something I’m going to continue to use once I’ve used up the included coils? Well if I’m ordering something else and the coils are in stock they just might “accidentally” get added to my basket, I can’t say fairer than that and at the fairly low price the tank is being offered at, then this is definitely worth a look if you’re a stock coil fanatic looking to save a few pennies.

Many thanks to Hellvape for sending the Dead Rabbit R Tank out for review.