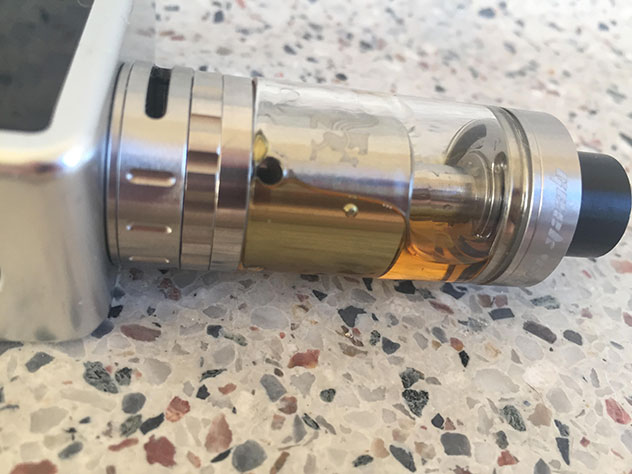 Geek Vape are a relatively new manufacturer who have burst onto the scene with a range of releases, such as the Aeolus sub ohm tank, the Tsunami RDA and the rebuildable tank that is generating quite the buzz at the moment, the Griffin RTA...

One of the key selling points of the Griffin RTA is the huge Velocity styled build deck which is aimed at accommodating large Clapton Coil builds, but also offers the space for you to really get creative with your builds. Huge 2mm post holes can also accommodate pretty much any gauge of wire you can think of and the deck has wide juice channels for any mix ratio of juice! Other key features include a 3.5ml capacity, large wide bore delrin drip tip, adjustable juice flow control and top filling.

The Griffin RTA has been earning rave reviews from early adopters, so let's see if it lives up to the hype! 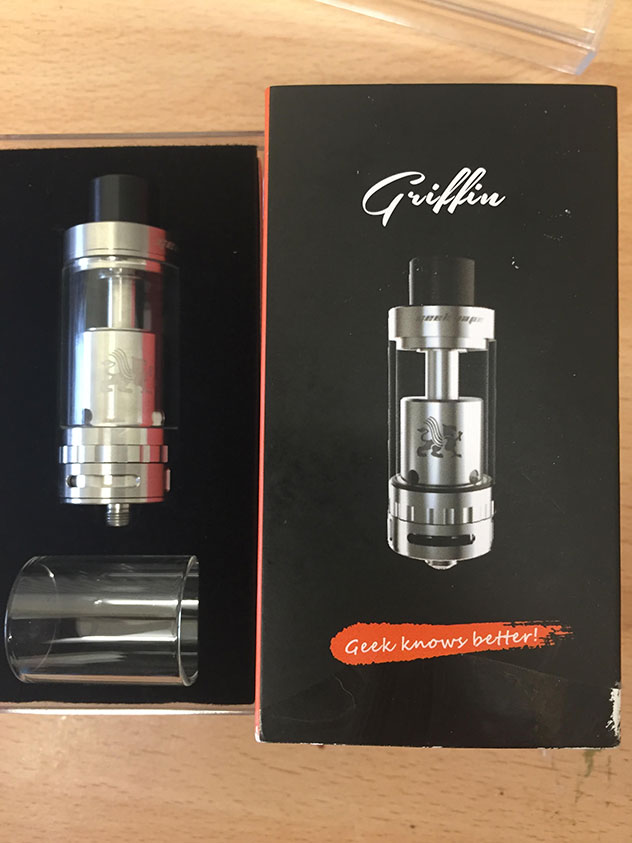 I'm a fan of the packaging, the Griffin RTA comes in a pretty attractive and stylish orange and white box, inside the box is:

The Griffin RTA sports your standard stainless steel and Pyrex glass tank section, and holds a respectable 3.5ml of juice, it's also available in black or stainless steel. At the top of the tank is a wide bore delrin drip tip and a 510 drip tip adaptor is included if you wish to use your own drip tip. The top cap has ‘geek vape’ printed on it and also unscrews for top filling, there are two huge juice flow ports that can accommodate anything- I've taken to just pouring juice from the bottle to fill the Griffin RTA! 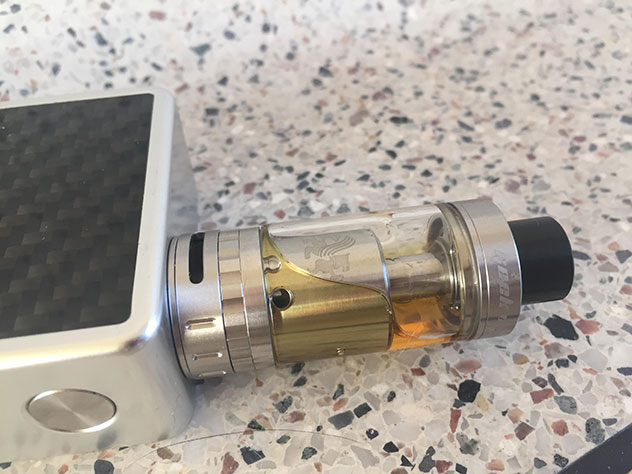 At the base of the tank you will find a gold plated adjustable 510 connector, along with your unique serial number. There are two large cyclops airflow slots, and just above this you will find the juice flow control ring. Rotate this when filling to close the airflow and avoid leaks, and rotate it back when done to open up the juice flow holes. A great feature is that you can access the build deck with a tank of juice, simply invert the tank, grip it above the juice flow control ring and twist. The Griffin also disassembles for cleaning too, with smooth threading everything comes apart allowing you to clean the individual parts. 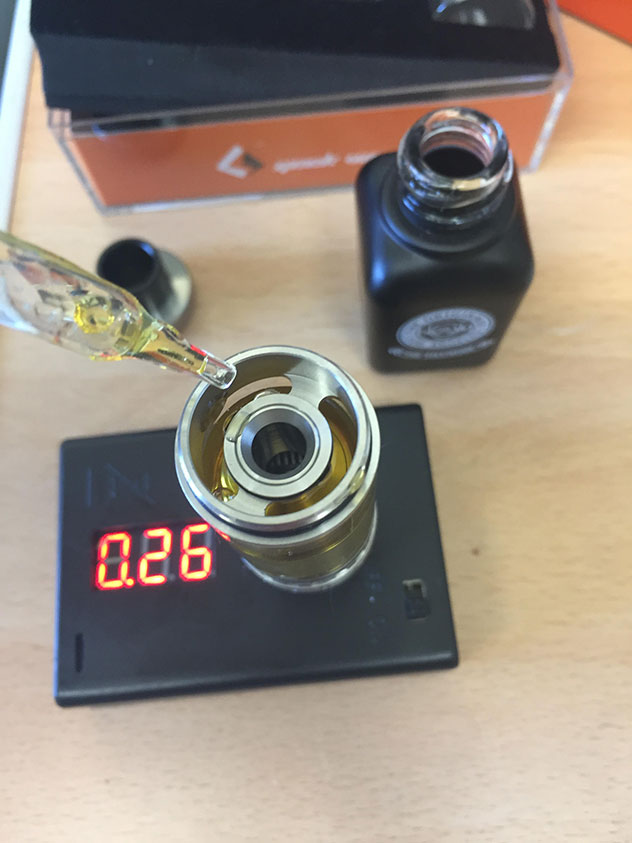 I do love the looks of the Griffin RTA, it's been a perfect fit on my Efusion and I think it's a stunning looking, very well machined tank that definitely boasts a premium build quality and feel. 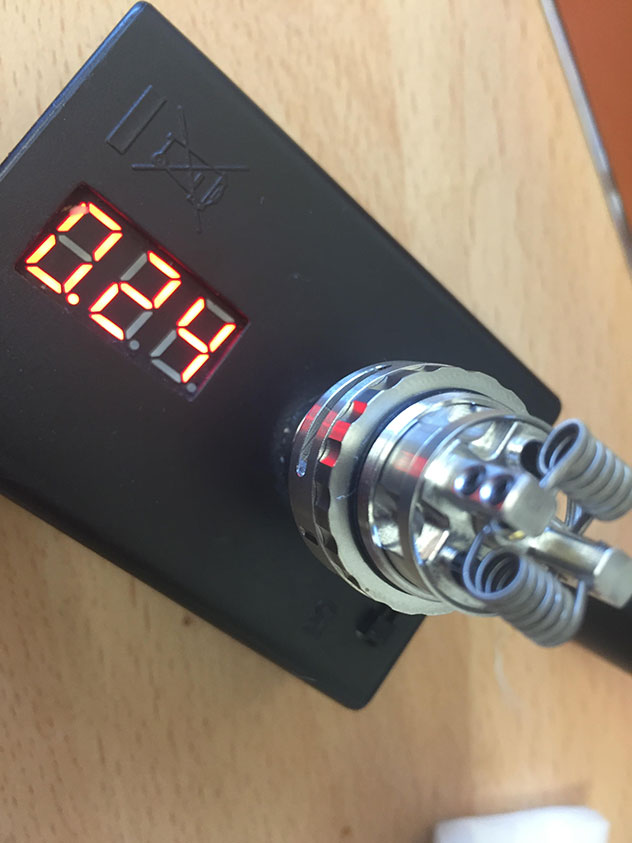 The Griffin RTA boasts one of the largest build decks yet seen with an RTA, at around 16.1mm in diameter, a two post Velocity styled build deck set up for dual coil builds with a whole load of room to build on! The two posts sport four post holes each with a massive 2mm diameter, and there is 6mm of space between the two posts.

There's a 4.37mm airflow hole at either side of the deck, which you will want to place each coil over, and the juice channels are a huge 5.31mm enabling the Griffin RTA to wick any juice ratio quickly. You'll notice a ring going around the outside of the deck, you will want to make sure your wick rests on the top of this ring and the wick does it go further down into the juice channels, otherwise you will end up with dry hits!

I myself used Cuckoo Coils fused 26/35 7 wrap Clapton coils, with an internal diameter of 3.5mm, these are some massive coils, but the chimney sleeve fit over these coils with room to spare. Really impressed with how much room you have to build with, and just how easy it is to build on the Griffin RTA’s deck! 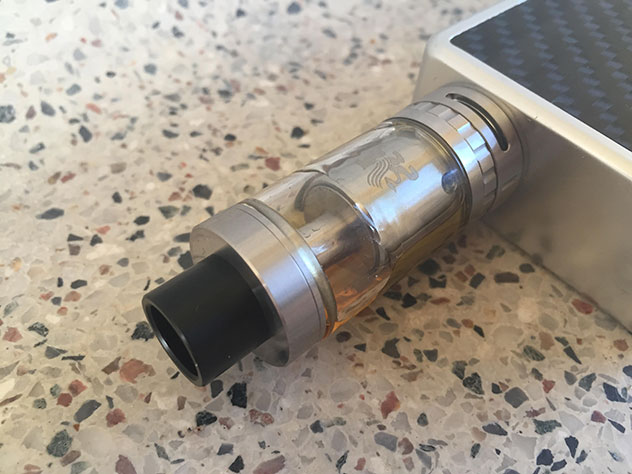 There are two massive cyclops airflow slots at either side of the Griffin RTA, and the airflow control ring itself deserves a special mention on its own as it works like a dream. It's buttery smooth and allows you to fine tune the airflow rather than clicking it into a preset position. It's smooth and responsive, and very user friendly.

There's more than enough airflow here to satisfy the hardiest cloud chaser, even though the Griffin RTA is primarily a flavour RTA, it offers some huge airflow and massive clouds! 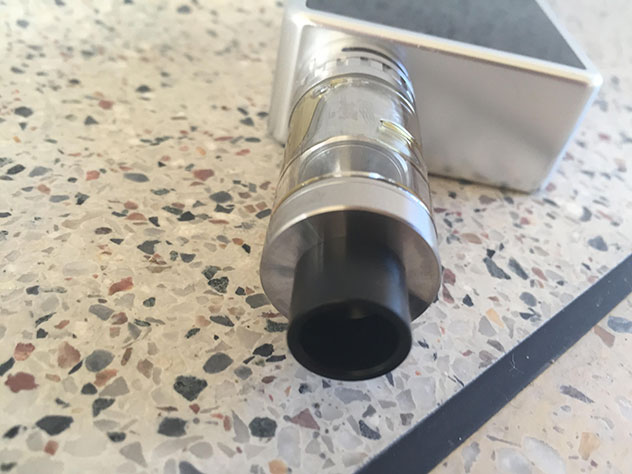 If you want clouds, the Griffin RTA delivers them in spades. As mentioned above there are two large cyclops airflow slots at either side of the tank, coupled with a 4.37mm airflow hole at either end of the deck, and even closing down the airflow still produces some absolutely whopping clouds. When wicked correctly it can be run at high wattage perfectly, without the tank getting too warm as well, I run my build at 60-70w depending on what juice I have in there but I have ran this at up to 105w with no issues.

Wicking is outstanding with the Griffin RTA. The 5mm+ sized juice channels enable the Griffin RTA to wick any juice ratio quickly and efficiently, and it keeps up perfectly when chain vaping even at 70+ watts. I tested two different types of cotton wick, Cotton Bacon and Celtic Cotton, and I didn't experience any dry hits, gurgling or muted flavour at all. The Griffin RTA is a tank I know I can stick any juice in and not have to worry about whether it will keep up or not, as it does every time. At 50w+ it's definitely thirsty, but no more so than many similar tanks designed for high wattage usage.

I've saved the best part of the performance of the Griffin RTA until last, and that is the flavour. It's truly phenomenal, even better than I expected it to be considering the massive hype around this tank, and it's definitely one of the most flavourful tanks I've ever experienced, and oh boy, does it live up to the hype. It takes the bar and raises it up a big notch, with an intensely flavourful vape that makes pretty much any juice you stick in it absolutely shine, and it's consistent too, whether at low or high power. I rediscovered a lot of my favourite juices in this tank and picked up flavour notes I never even knew existed, not once did the Griffin disappoint me or let me down. Anything but, I love the flavour from this tank so much that the Griffin RTA has become a permanent part of my daily rotation, and a tank I use a hell of a lot! 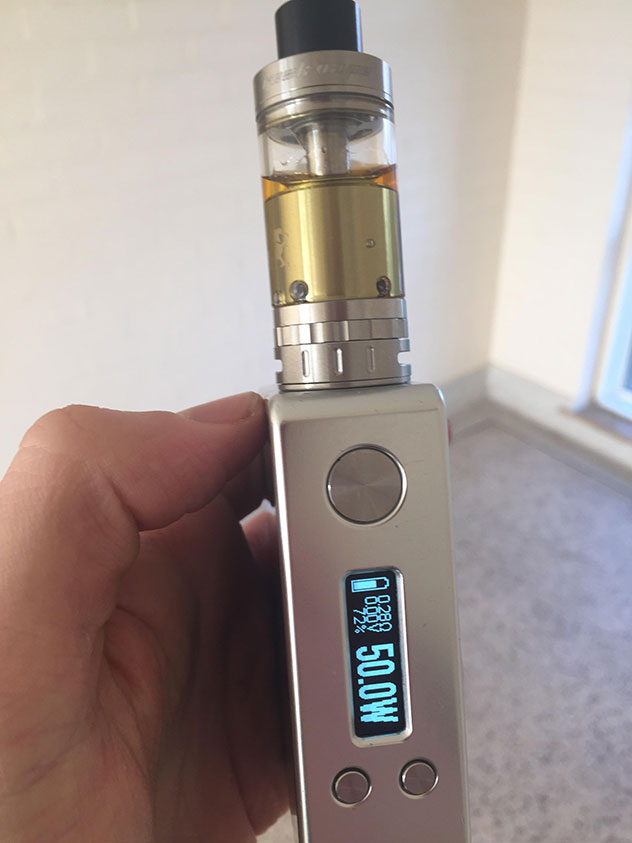 Geek Vape may well be a relatively new manufacturer, but they have pulled an absolute stunner out of the box with the Griffin RTA. A superb tank that combines superior flavour performance with huge cloud production, and a huge build deck enabling the Griffin RTA to perform on the same level as a lot of RDAs available. Chances are many of you may not have heard of Geek Vape before the release of the Griffin RTA, however I'm sure now you will be hearing a lot more from these guys in the future!

The Griffin RTA boasts premium performance in a budget package and I've been especially impressed with the ability of this tank to wick anything you can throw at it, the complete lack of leaking, and its versatility in performing incredibly well at low or high power. It just performs how you would want it too, and offers an immensely satisfying vape. It's one of the best flavour tanks I've ever tried, regardless of the price. I've had precisely zero leaks from this thing, not even a drop, even when I've left it on its side, which is massively impressive.

The Griffin RTA is a already a leading contender for budget RTA of the year for me, and we've already had a great start to the year with the release of the Goblin Mini V2 and the VCMT, however the Griffin RTA performs that well, it's going to be interesting to see what if anything can top it this year. If anything it proves that you don't have to shell out big money for premium performance!