Always on the lookout for a decent single coil RTA, I spotted one that seems to have slipped under the radar a little so I asked our friends over at Sourcemore if I could take a look at the Gas Mods Cyber RTA. 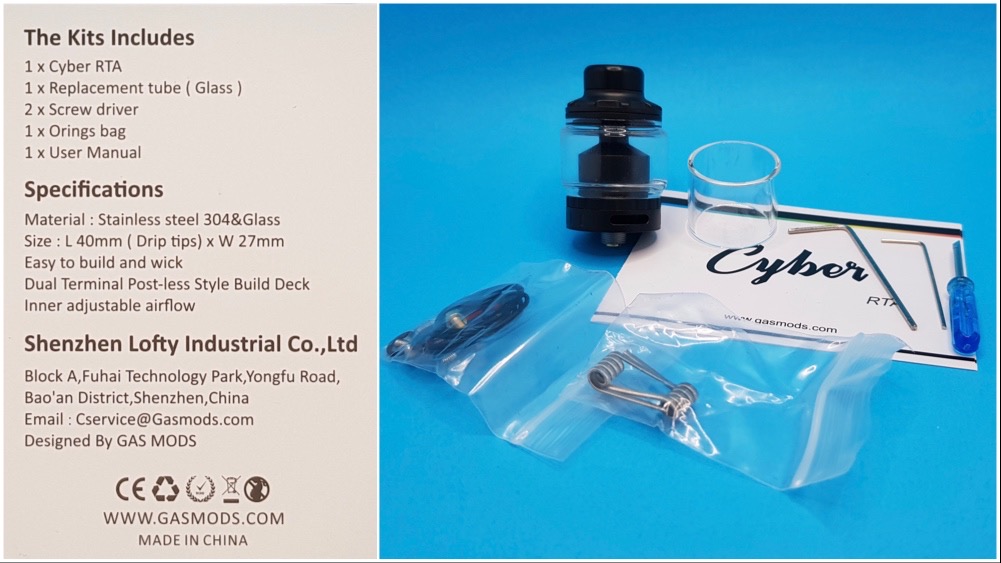 This is available in black, stainless steel and rainbow and luckily Sourcemore sent out the black version because I forgot to ask them not to send out the rainbow version (yuck!). It comes packaged in a small box with a bubble glass preinstalled, a spare straight glass, two clapton coils, spare o-rings and screws and two allen drivers.

After removing the Cyber RTA from the box for its photo shoot, I quickly discovered that the tank was basically welded together, the only thing that was moving freely was the bubble glass, not a good sign! This eventually required the use of rubber gloves and copious amounts of foul language to finally free all the parts up. Once I’d achieved this task, everything went back together much more smoothly and it hasn’t been an issue since, but it wasn’t a great unboxing experience to say the least. 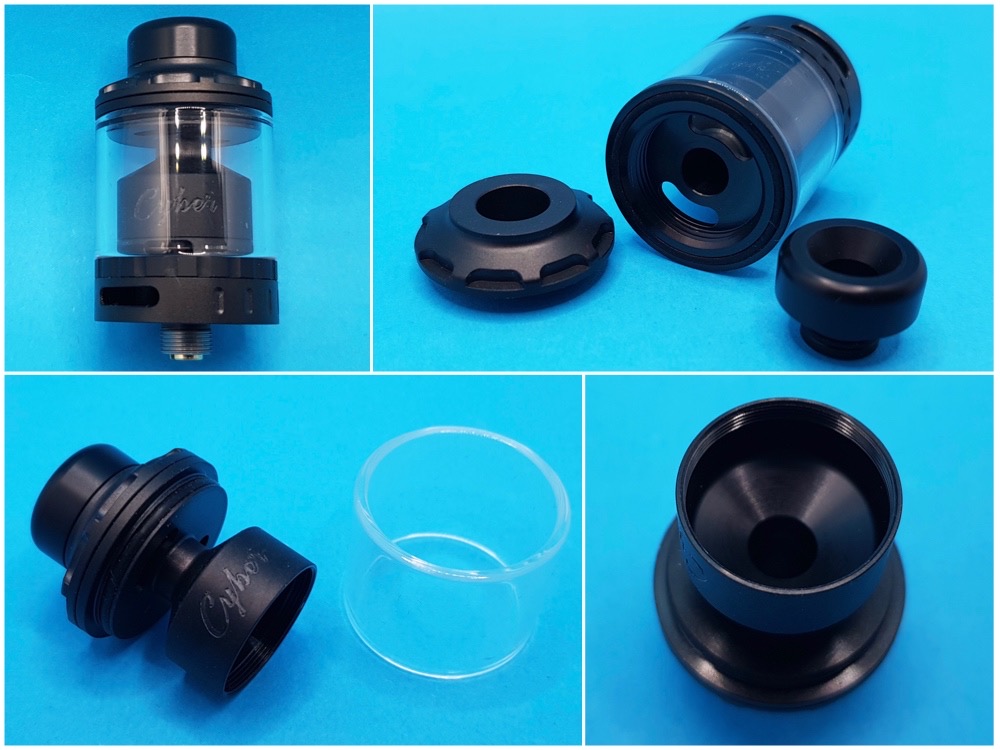 Once I’d got things stripped down, it quickly became apparent that things were a little on the loose side. Remember that spinning bubble glass? Well the straight glass does it as well albeit to a lesser degree, and the drip tip was also a little on the loose side as well. Swapping out the O-rings on the drip tip soon fixed that but I’ve yet to find a big enough O-ring to stop the glass spinning and you also have to watch out for the O-ring on the build deck which has a tendency to wander off if you’re not paying attention as well. This isn’t bad enough to cause leaking, but it is annoying so bear in mind you may need to “borrow” some O-rings from something else to get everything to fit better. Bigger O-rings all round are essentially required here.

The capacity of the included glasses isn’t quoted in the included instruction leaflet or on the Gas Mods website, and I’ve seen all sorts of figures bandied about on the interwebs. Fortunately DJLSBVapes reviewed this a while ago and actually measured them, it’s 3ml with the straight glass and 4ml with the bubble glass.

Other than that, it’s a straight forward three piece design with a screw top fill port, chimney section and build deck/AFC section. The top cap has a cog style design on top which helps when unscrewing it, and the fill ports are a decent size so no issues there. The AFC has hard stops either side and can be removed for cleaning, however it should be noted that this is impossible to adjust whilst it’s on a mod which can get a bit frustrating.

This brings me onto the build deck which has an interesting feature which attracted me to the Cyber RTA in the first place. The main airflow is from a large slot directly under the coil with six holes directed from the bottom/side of the coil (three on each side). These side airflow ports are threaded and can be closed down by the smaller screws included in the spare parts bag. Again it’s not all good news though as this design means that if you want to experiment with this side airflow, you’ll need to take your build out to access them.

I was also a little concerned because the build deck is also coated/painted, and I know from prior experience that this can sometimes cause connection/resistance issues but thankfully that doesn’t seem to be the case here. 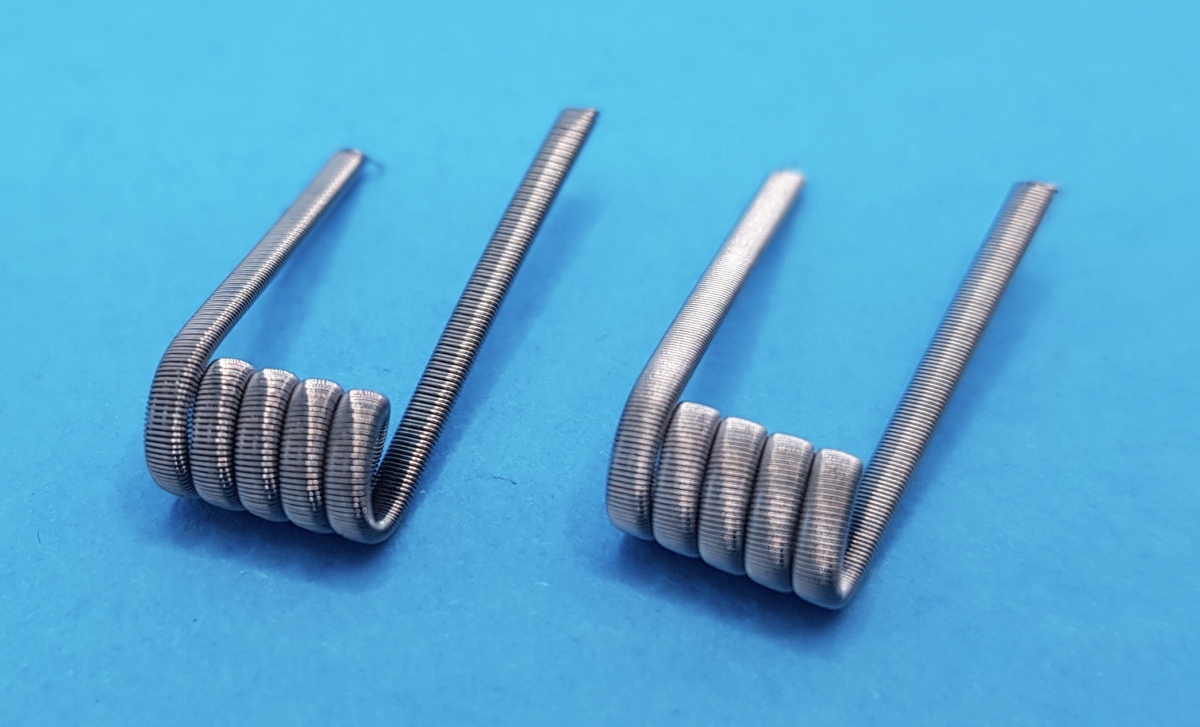 There are two rather nice fused claptons included in the package, coil material isn’t stated but as they’re not magnetic it’s a pretty safe bet that these are nichrome, so once again I won't be using them thanks to my nickel sensitivity.

Onto the traditional 2.5mm inner diameter kanthal round wire build it is then. The deck is designed so that you can wrap your coils either way which is welcome, but I quickly discovered that you need to hold the leads in place under screw as there’s too big a gap between screw and post and the lead can slip into this all too easily, round wire builds are possible but you will need to pay attention and make sure you have the leads fully secured before you reach for the wire snips.

The wicking ports seemed fairly generous so I cut the wick just beyond the outside of the deck and simply fluffed out the ends rather than thinning them out. This turned out to be the perfect amount and the wicking kept up a treat. The build came out to 0.53ohms and I was getting decent, but not outstanding, flavour at 30 watts with the airflow about half closed. This would possibly benefit from closing some or all of the side airflow ports but as I had to take the coil out to do this, I thought I’d simply move onto the second build instead. 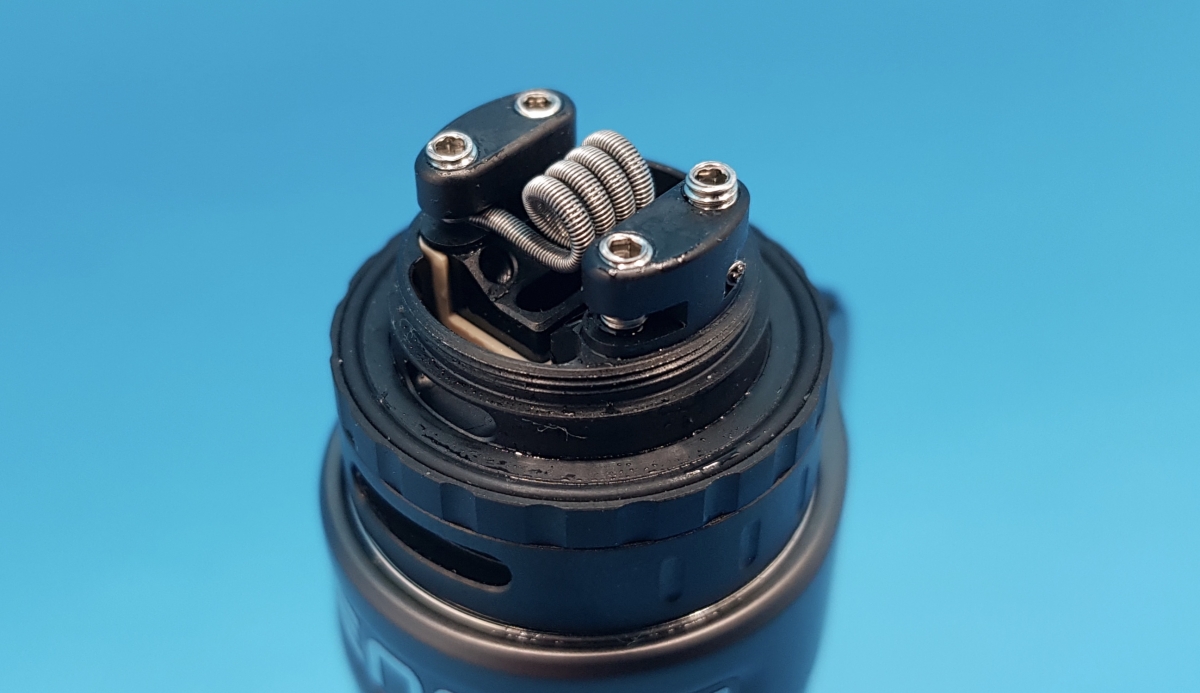 This time I went with a Kanthal fused clapton. As the wicking worked so well with the 2.5mm i.d. round wire build, I stuck with that although there’s plenty of space for a 3mm coil if you wish. What there isn’t room for though is a long coil and I had to take one wrap of the coil I’d made because of how close the screw posts are. On the plus side, at least it was much easier to capture the leads this time.

This build came out to 0.29ohms and at around 50 to 55 watts, it gave nice, semi restricted direct lung vape with pretty good flavour. The airflow was fairly smooth across the board, but once again it was annoying to continually have to take the tank off the mod to adjust this and I finally settled on the airflow about two thirds open.

Finally I decided to try experimenting with those side airflow holes. I filled in the outer two holes on either side leaving just the centre holes open and this did seem to bump the flavour up a notch whilst simultaneously allowing me to drop the wattage a little, so this is well worth experimenting with and is not just a marketing gimmick. Now I’ve got this build in place, I’m quite happy with the Cyber RTA.

The Gas Mods Cyber is a pretty decent single coil RTA with plenty to like despite some obvious niggles like the airflow that you can’t adjust without having to take the tank off your mod. You’ll also have to be prepared to have to fiddle around looking for alternative O-rings and the like as well, as the supplied ones are simply too small for the task at hand.

Many thanks to Sourcemore for sending the Gas Mods Cyber RTA out for review. 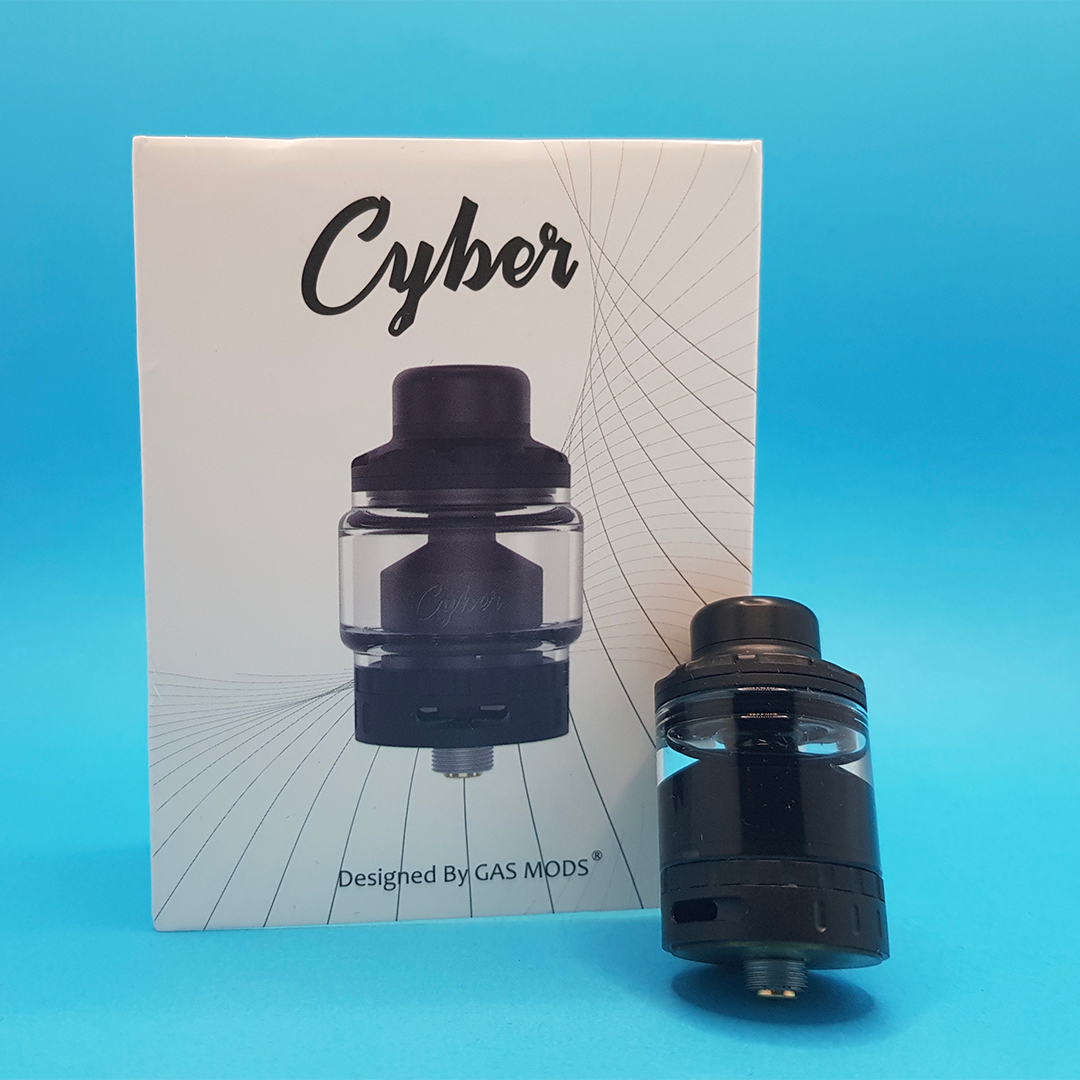