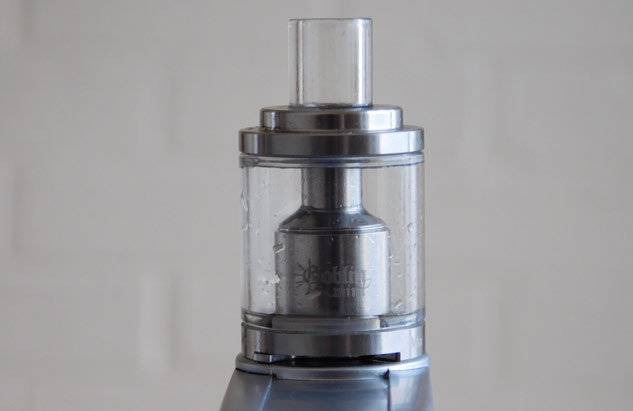 Introduction to the Goblin Mini

The original Youde Goblin was only released a few months ago, but with how quickly things move within the industry this already feels like an age away, and keeping up with the current trend of ‘mini’ atomisers Youde have released the Goblin Mini, the shortest RTA around at 28mm, featuring single coil build options, a new lever controlled airflow system that feeds airflow directly under each coil and the same outstanding performance the original Goblin offered in a much smaller package. Hopefully Youde also managed to fix the leaking issues that plagued many users of the original Youde Goblin!

Youde’s original Goblin RTA was a hugely popular Rebuildable Tank Atomiser, arguably the first RTA that offered dripper level performance in terms of flavour and clouds, and available at a great price for an original RTA. I myself was very impressed with the original - you can read the review of the Youde Goblin here.

The Goblin Mini promises much the same as the original, but in a smaller package, this is one RTA I have been really excited for, so let’s see if it lives up to my expectations:

This time around Youde have included not one, but two drip tips within the Goblin Mini packaging, whereas the original didn’t have a drip tip included at all! The packaging has also been redesigned and now comes in a smart presentation box, which houses:

As mentioned in the introduction Youde have reduced the height of the Goblin Mini to 28mm, making it the shortest RTA around, and more in line with a lot of rebuildable dripping atomisers! This thing is tiny, paired with a small mod and you have a hell of a stealth set up at your disposal, in terms of looks anyway as there is nothing stealthy about the performance from the Goblin Mini! Width is still 22mm so it sits flush on your mod.

Youde have done away with the Kayfun Mini-esque styling found with the original Goblin and come up with a pretty unique design of their own, you have a brushed stainless steel top cap, 3ml pyrex glass tank section where you can see the full juice capacity and brushed stainless steel bottom section featuring the all new lever controlled airflow system. It looks really nice, far nicer than the original in my eyes, and paired with a ‘mini’ mod such as the SX Mini M Class or Sigelei 75w TC it looks superb. You have a pyrex glass drip tip included in the package which fits in with the overall styling. 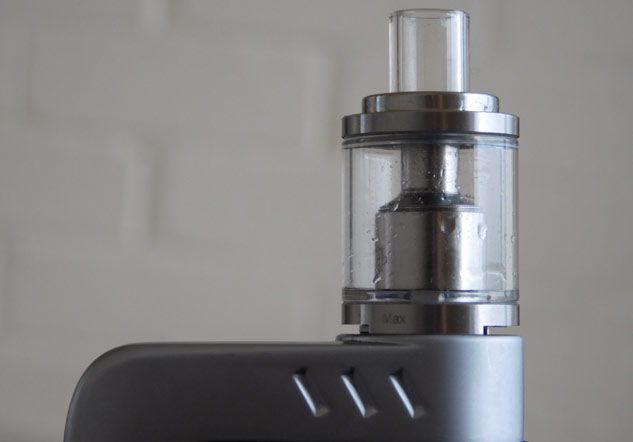 Machining quality is much better than on the original in my opinion. There was no machine oil visible on the deck of my Goblin Mini, unlike the generous helping that came with the original, however I still gave the unit a good clean before using. Post screws are much smaller than they were on the original Goblin and thankfully none of them were threaded this time around, I didn’t have any issues screwing them in or out or with trapping coil legs down.

Filling is still done via a small fill port at the bottom, many were experiencing issues with leaking through the fill screw, this time around Youde have affixed a small O-ring underneath the screw head that is intended to stop leaks through the fill port. So far, I haven’t experienced a single leak through the fill port thanks to this little O-ring. The fill port can still accommodate most sizes of bottle tops and fill syringes, just be careful to close off the airflow when refilling and not to overfill the tank as this will result in juice leaking out of anywhere it can escape!

The same build deck has been retained for the Goblin Mini, which is pretty compact, you have the same 4 post arrangement with pretty small post holes in the posts, big juice channels (which I believe are slightly larger than on the original Goblin) and fairly small build space. You are going to really struggle to build a coil with a larger internal diameter than 3mm and fit it in, the widest I have managed was 2.5mm, as per the original. You have airflow holes that are now wider and crescent shaped around the edge of the deck compared to the circular airflow holes found with the original. Unfortunately, I have found that you do get leaks through these airflow holes, especially if you have not used enough wick with your build.

To start off with, and to compare the Goblin Mini against its predecessor, I used the same build in the Goblin Mini as I did in the original Goblin, as this served me so well with the original, this was 7 wraps of 0.42mm kanthal with a 2.5mm internal diameter. After centering and raising the coils, this JUST about fits in without shorting against the chimney sleeve. You don’t want to go crazy with wick, but you also need enough in there so that you stop leaking through the airflow holes. I found that if you wick fairly generously, put enough through your coil so that you can still move the wick around in the coil by tugging gently at either end, and snip the tails off at the top of the juice channels so that the wick tails rest in the top of the juice channels, you get the best wicking performance from the Goblin Mini. I found using the same build that the Goblin Mini performs just as well as the original did, with excellent flavour and cloud production. 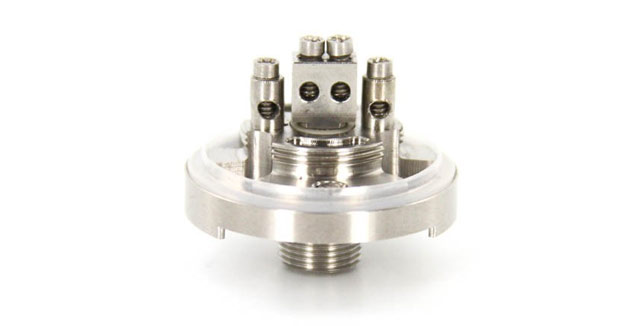 I tested this out and achieved really good results with a single coil Ni200 build on the SX Mini M Class using temperature control, I built a coil with 9 wraps and a 2.5mm coil internal diameter using 0.4mm Ni200 wire from Stealthvape that came in at 0.06ohm, the flavour was outstanding from this build and surprisingly the clouds were pretty impressive as well. The Goblin Mini also seems to leak less for me with a single coil than it does with a dual coil. I have now come to prefer using the Goblin Mini in temperature control with a single coil over a dual coil kanthal build.

One of my favourite features of the original Goblin was the superb airflow, at the time the original Goblin was released this was considered to have some of the biggest airflow out of any rebuildable tank. There were a few issues with the original airflow however, namely the odd leak from it, and the annoying tendency that the AFC ring had of slipping off and rolling away once it hit the floor….

For the Goblin Mini, Youde have totally redesigned the airflow, and the new airflow system bears no resemblance to the old airflow system used with the original Goblin. I can only think that this new system has been bought in to save on the height of the tank whilst still retaining the excellent airflow options found with the original. For starters, it is now controlled via a lever on the outside of the tank, by adjusting this from ‘min’ to ‘max’ you will be able to control how much airflow is directed under each coil. Two airflow holes are found at either side of the build deck and this is where air is directed up and underneath the coils. Wide open, the Goblin Mini blows huge clouds, and it still blows huge clouds even when closing down the airflow. Close the airflow right down, and as detailed above, you can achieve a mouth to lung hit with the Goblin Mini. You do still get a few leaks from the airholes especially if you haven’t used enough wick with your build.

It’s a really unique airflow feature, and nothing I am aware of available these days has a system like it, but I don’t think it improves on the outstanding flavour and performance from the original Goblin, but it matches it. Which still means you have one of the airiest and most flavourful tanks there is available!

Flavour is still absolutely superb, clouds are still absolutely massive, and the Goblin can still mix it with most RDA’s in terms of performance. The redesigned airflow system is very easy to use, and works very well allowing you to really finely adjust your vape, it was a big call from Youde to remove the fantastic airflow system used with the original Goblin and replace it but I’m glad to say it hasn’t impacted on performance at all.

I have had no issues with the build quality of the Goblin Mini, and the single coil option is excellent as this now means that both mouth to lung vapers and lung inhalers can now be catered for, and the flavour you can get from a single coil build is absolutely superb, for example running the Goblin Mini with a single coil Ni200 build gives some amazing results in temperature control. The Goblin Mini might be a shorter package now but it’s definitely still packing the same huge punch the original Goblin did, this is still the market leader in terms of flavour and cloud production from an RTA!