The Billow RTA has been manufactured in conjunction with Eciggity and EHPRO, designed to offer a dripper level quality vape in a tank, with large juice channels for faster wicking and a four post wide build deck enabling a number of different build configurations to be installed and used to maximise your vape quality, with a large 5ml tank to minimalise the need to refill your tank constantly. It’s also priced at the lower end of the scale now that version 2 of the Billow has been released.

What sets the Billow RTA apart from the rest, does it offer a dripper level quality vape in a rebuildable tank?

A special mention has to be made for the screwdriver itself. You don’t just get your bog standard blue screwdriver here, but a proper screwdriver complete with flat head option on one side and Phillips head screwdriver on the other, as well as a keyring attachment. The packaging is great too, really well designed and attractive.

The Billow RTA is very simple to set up, the sections come away easily offering you easy access to the build deck. The build deck itself is massive, you have got more than enough room here to build on. The cyclops airflow slots are located on the build deck slightly off centre to the posts, and the posts themselves are in a four post configuration. Post holes are quite generous too, you can slot some pretty big wire in here with minimal fuss. Post screws are smooth and everything looked very clean here with no traces of machine oil visible. The juice channels are massive, the biggest I have seen from any tank, those juice channels look more than capable of handling high VG juice and delivery juice to feed your wicks quickly! The drip tip is quite narrow and not to my taste to I swapped this out for more of a wider bore one. 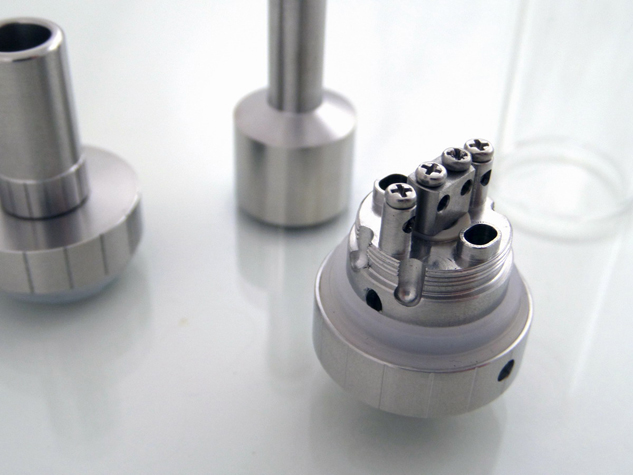 Building the Billow is easy. You have the option of using the included pre made coils if you wish, which simply need installing and ensuring they are lined up on the deck. I myself installed a dual coil build that I built myself using 0.4mm kanthal and a 3mm coil internal diameter, this came out at 0.45ohms, which is how I like the majority of my tanks to be set up. Wicking the Billow I ensured that I used a quite generous amount of wick on the deck as the cyclops airflow slots looked like they could cause leaking issues. After making sure my coils lined up centrally on my deck, I raised them slightly and fitted the chimney over the top of the build, the chimney fit with room to spare. All sections of the Billow RTA screwed back together with no problem.

Next step is filling the tank. There is a fill screw at the bottom, simply unscrew and fill. It’s wide enough to accommodate most bottle tips so you won’t necessarily need to fill with a syringe. The tank capacity is 5ml so it accommodates plenty of juice. At the bottom of the tank are the airflow adjustment screws- you need to adjust these in order to adjust your airflow. This can be a pain when you would like to adjust your airflow on the fly as you need to remove the tank from your mod, adjust the airflow, then replace the tank on top of your mod. Once your tank is full and you have adjusted the airflow to your preference, you are ready to use the Billow RTA!

As this is a rebuildable tank please exercise caution when using, make sure you have an ohms checker to hand so that you can check your builds are within a comfortable resistance, check that you have no shorts in your build and that your batteries can comfortably handle the build you install in the Billow RTA.

It’s built for high power, I have taken my current build up as high as 75w on the SMOK M80 Plus with no problems at all, the vape became really warm however, even too warm for my tastes! I found it far more comfortable at the 45-50 watts range dependent on the juice. Wicking the Billow RTA generously ensured that I did not have many issues with dry hits at all, thanks to the wide juice channels there is always a steady supply of juice going to my wick.

All in all, despite the leaking issues, performance wise I have no complaints with the Billow RTA, it delivers really good flavour and clouds.

The Not So Good

Clouds and flavour are present and correct here, the Billow is capable of delivering this in abundance, and the build deck is a complete joy to work with. The Billow wicks even the highest VG juice without any issues at all, and that is down to those large juice channels.

The Billow RTA is a great tank but it is flawed. Particular annoyances are the fact the Billow is very leak prone, no matter what wick configuration you have used, and the airflow is adjusted via fiddly screws at the bottom which you don’t have easy access to, your tank needs to be removed from your mod to adjust the airflow. Hopefully these little niggles can be ironed out with the Billow V2 and then we would have an excellent tank on our hands!