Always on the lookout for a decent mouth to lung setup for evening chill outs in front of the TV, I was intrigued when the Digiflavor Siren V4 MTL RTA started appearing online. I had a Siren V2 many moons ago but ended up giving it away because I wasn’t the slightest bit interested in MTL vaping at the time, so I wanted to give this revamped version a whirl to see what I was missing out on the first time around and our friends over at Sourcemore were kind enough to send one out for review. 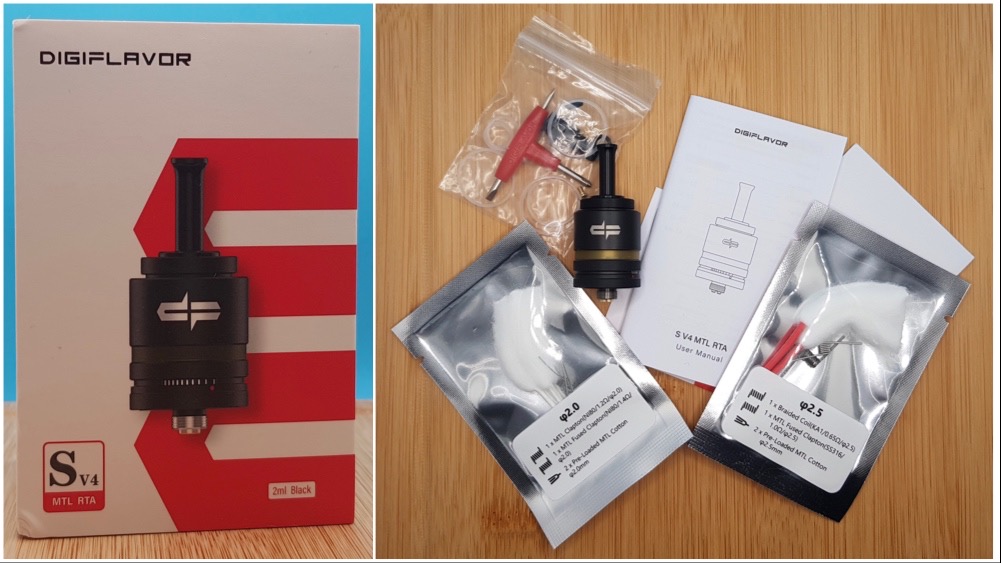 There’s actually quite a lot included in the box, especially considering that Digiflavor products tend to be very competitively priced. Besides the Siren V4 itself, you get two drip tips, four premade coils plus cotton, and the usual bag of o-rings and the like. The only thing I would say is missing from this package is a spare tank section, at the price this is being offered at you can’t complain too much, but it would have been a nice addition and I would rather have had that than the premade coils if I’m honest. 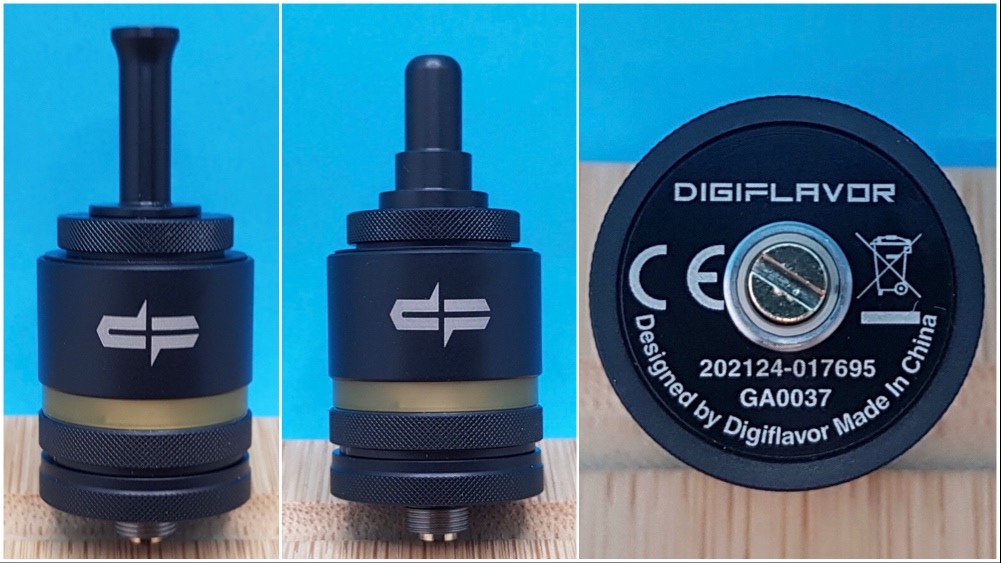 The Siren V4 is a very short RTA, even by mouth to lung standards, and has a very sleek design. I particularly like the slightly matte black finish on the one sent out for review and even the Digiflavor logos on the sides don’t look too out of place. There’s a nicely protruding positive pin as well so I’d feel comfortable using this on a mech if that’s your preference.

Out of the box the Siren V4 comes with a rather tall drip tip installed, I gave this a quick try once I’d got a build installed and although it was surprisingly comfortable to use, I decided it wasn’t my cup of tea at all. I opted to use the second drip tip included in the spares bag, this didn’t have the o-rings fitted but they were supplied in the bag, and I found this to be much more to my liking. These are both standard 510 drip tips so you can also use your own if neither are to your liking, and the top cap has a perfectly flat platform so it shouldn’t cause you any issues whatever you choose.

The top cap is knurled so is easy to remove and only takes a couple of turns, the threads are fairly good but it can sometimes be a bit of a pain to get them to catch when screwing the top cap back in place, a quick back wind solves this though. This reveals two generously sized fill ports along with two o-rings to keep everything nicely sealed. Filling is easy but it is difficult to see what’s going on (more on that later) so pay attention otherwise you’ll quickly flood the entire area. 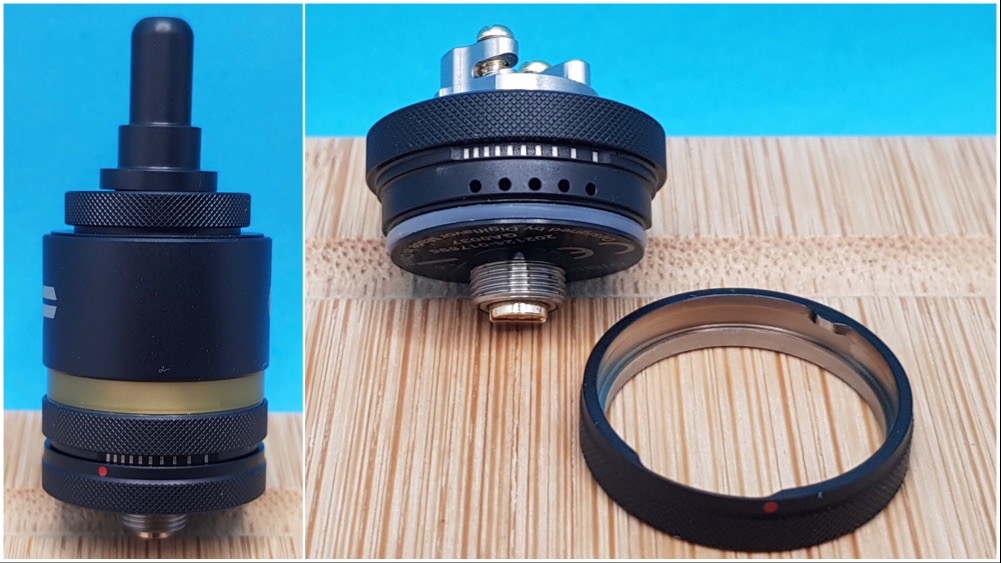 One of the selling points for the Digiflavor Siren V4 MTL RTA is the concealed airflow, there’s a small red dot on the airflow control ring (AFC) which lines up with a small scale on the body of the tank, turn this all the way to the left for a really tight mouth to lung (MTL) draw or to the right for a looser one. The AFC can be removed for cleaning by turning it all the way to the left and then pulling down, this reveals five small air inlets which are exposed to a small cutout in the AFC ring as you turn it to the right…very clever! This has worked well in use going from an eye wateringly tight draw to a loose relaxed MTL which is what I prefer, I’ve been using it on the third mark from the right which looking at the design means I’m probably using four of the five air holes. One downside here is that it is rather difficult to move when you have it screwed down on a mod so even with the knurling on the AFC it can be a bit of a chore and it’s often easier to remove the tank to make any adjustments. 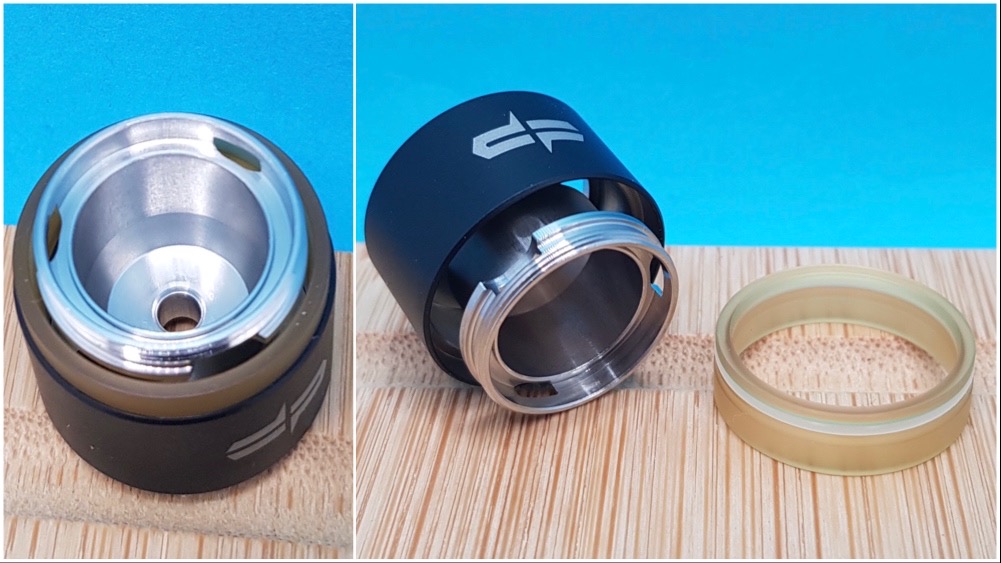 The tank can be removed for cleaning, this is a two part affair with the chimney and a small PEI (Ultem) tank which is held in place with an o-ring. The chimney itself has a little bit of doming going on and a narrow 2.8mm bore, you can also see three wicking ports here for liquid to access the deck below. Whilst this does look rather snazzy it also poses a couple of issues.

First of all the viewing window is very narrow at just 3.3mm tall, couple this with the PEI (yellow) tank and it suddenly becomes very difficult to see just how much e liquid you have in the tank hence the difficulty filling noted above. Secondly there’s no spare tank included, luckily PEI (Ultem) is fairly tough but if you habitually use tank crackers then you may want to think twice before hitting the buy button! 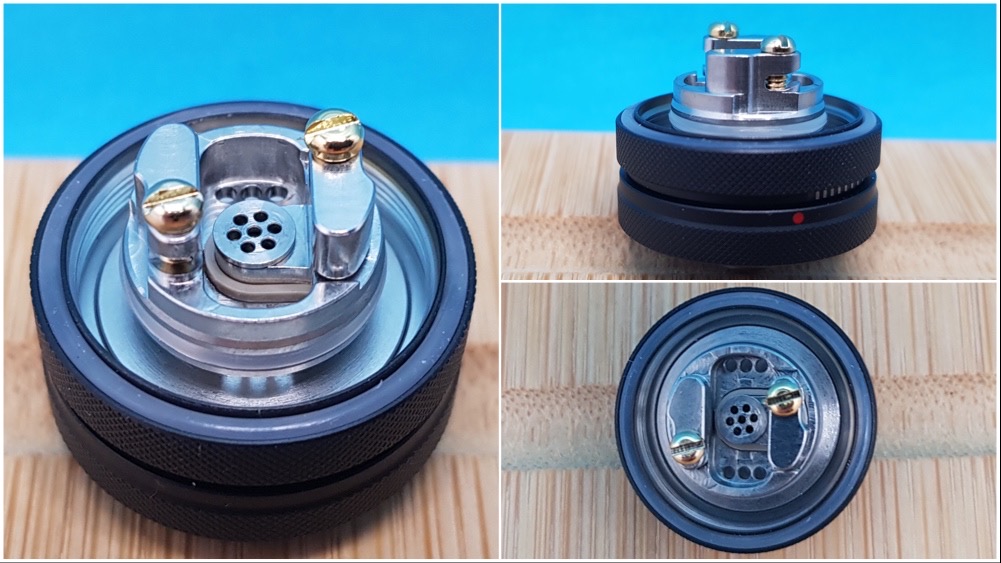 Finally this brings us to the build deck which has the classic Siren layout sporting a raised GTA style deck with a diffused airflow under the coil. There are two fairly decent sized wick ports to either side and dual posts for your coil with a lip to try and prevent the coil getting spat out. 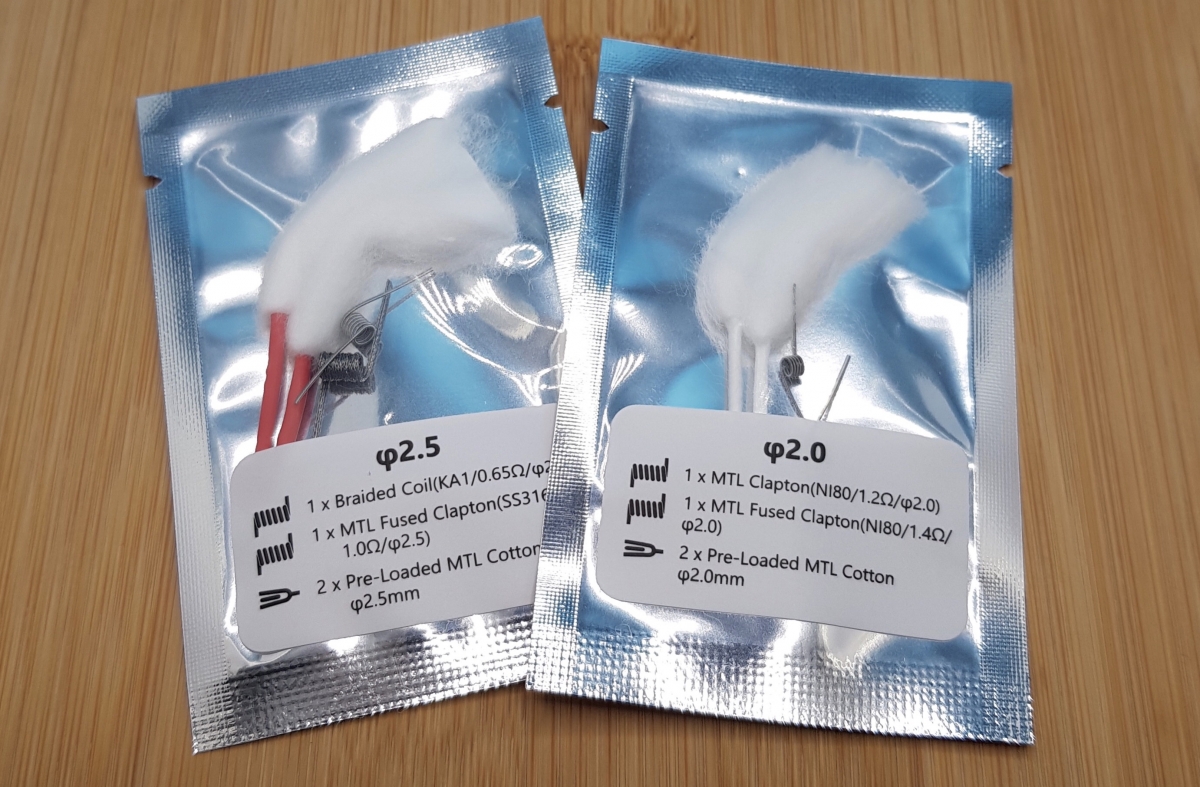 Digiflavor has been rather generous with the included premade coils, sadly two of these are Ni80 so I straight up can’t use them thanks to my nickel sensitivity, the third is ss316 which again I’m currently trying to avoid as I’m beginning to suspect that I now cant handle the 10~12% nickel content here either, and finally there’s a Kanthal coil but it’s braided and I hate the vape off braided coils! You may get a lot of use out of these but obviously they’re no good in my case and as I mentioned earlier I’d much rather have seen a spare PEI tank section in their place.

So onwards to my default MTL kanthal round wire build it is then! 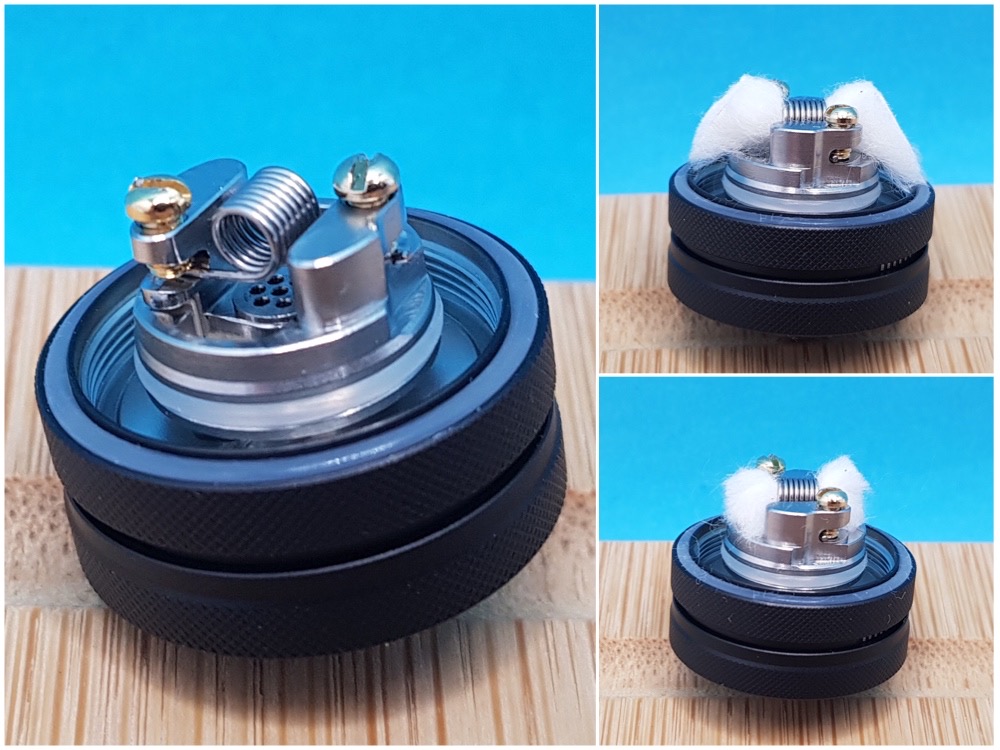 Due to the post design, this will work best if your coils are wrapped clockwise. I found it easy enough to capture the leads but did need to hold them in place under the screws whilst tightening down. Clipping the leads was easy as the posts are cut in slightly from the edge so shorting out on the chimney shouldn’t be an issue here. For the wicking, I lined my scissors up with the edge of the tank and cut at a 45 degree angle then tucked the ends of the wick in place.

At my standard 20 watts for this build, this worked very well although next time I might not be quite as aggressive with the cotton and leave just a little more in there fluffing the ends of the wick rather than cutting at 45 degrees. Flavour was great at my preferred looser MTL setting. I did feel it perhaps dropped off a little at the tightest air settings though so if you prefer a super tight MTL, then this may not be your best choice.

Digiflavor always price their gear very competitively and at the price the Siren V4 MTL RTA is being offered at, this is something of a steal. I rather wish I’d been more into MTL vaping back when I had the Siren V2 now. This has been a perfect match up for my Geekvape Z50 mod, especially as they're both black and it’s a nice modern spin on a classic RTA of yesteryear.

Many thanks to Sourcemore for sending the Digiflavor Siren V4 MTL RTA out for review. They also gave me a discount code for you to use as well Code: SIRV4 will net you the Siren V4 at just $18.18.