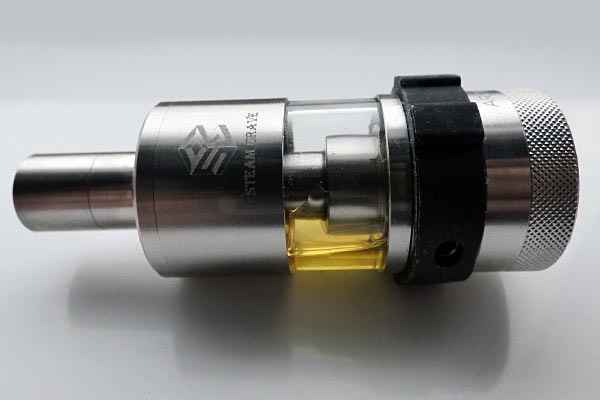 I reviewed the Aromamizer RDTA (Rebuildable Dripping Tank Atomizer) a while ago and all things considered it was a decent atomizer but I was not a huge fan of the build deck since I found it rather cramped and awkward to work with. To their credit the manufacturer Steam Crave released a revised version which comes with a Velocity style deck for easy building a while ago and this has been a really big hit with the vapers on our forum.  So we have a closer here to see what all the fuss is about! 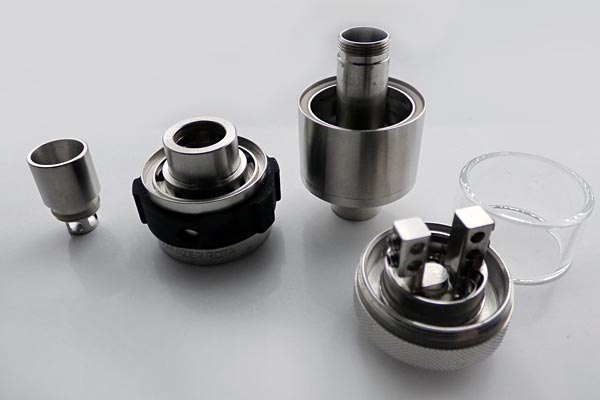 This version of the Aromamizer is almost identical to the original and it is a very nicely machined atomizer. All of the parts fit well together and they were completely free of any machine oil.

The drip tip is a much better fit than the original and you no longer need to screw it in. All of the other drip tips I tried seemed to fit the Aromamizer without issues. The included drip tip features anti spit-back protection and according to Steam Crave the tip also helps to increase flavour but I do find that somewhat debatable since to me the flavour was exactly the same no matter what drip tip I fitted but that could be down to my taste buds.

The overall look of the tank is quite stylish but sadly the rubber vape band/airflow controller still exists and while I realise it may seem useful and convenient it just comes across as kind of tacky to me (spoils the aesthetics) and I would rather see the Aromamizer with a proper stainless steel airflow controller. Thankfully this time you get two of these rubber vape bands one supporting dual coil airflow and the other favouring single coil set ups.

The capacity is certainly excellent if you buy the SC200 6ml version (received for review) but it does mean the tank is a little large, in fact a few centimetres taller than my GP Heron 1.5 with the 510 adapter fitted. The SC200-S’s 3ml capacity is also good with the advantage being that overall it is a little more compact. The deck is based on the highly praised and convenient “Velocity” style made popular by that RDA. Unlike the original Aromamizer base which I felt was a real pain in the backside to work with the new version is an absolute pleasure to use. There is a good amount of space, the post holes are generous (about 2mm in diameter) and the grub screws work well and do not cut the wire.  If you like the shorter look though there is also the 3ml version that can be purchased.

If for some crazy reason you decide you would prefer to go back to the old deck (why would you?) the deck can be unscrewed and swapped out. Do make sure to fully tighten the deck when installing it or you find your resistance jumping all over the place.

The Aromamizer feeds juice to the wick via its “direct to deck liquid feeding system”. This works as a kind of bottom automatic juice low system where the wicks soak up fresh liquid continuously as you vape. It works via liquid traveling down from the tank, around the outside of the build deck and up through four holes in the floor of the deck leading directly to the wicks. It is a highly efficient and innovative system! 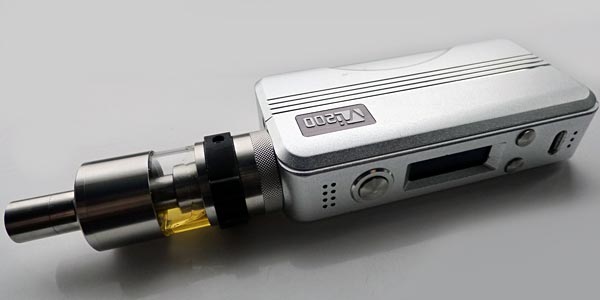 The Aromamizer features side airflow very much like a typical RDA but the actual design is quite clever since by keeping the airflow separate it helps to prevent leaking.  It is another innovative feature of this atomizer even if I don’t personally care for the look.

The Aromamizer has plenty of airflow and it makes for a very pleasant draw. As mentioned earlier the airflow is adjusted via removable, thick rubber bands (one with four air holes and one with two). I don’t think I will ever get used to how they affect the overall styling of the tank but their usefulness and practicality makes sense. 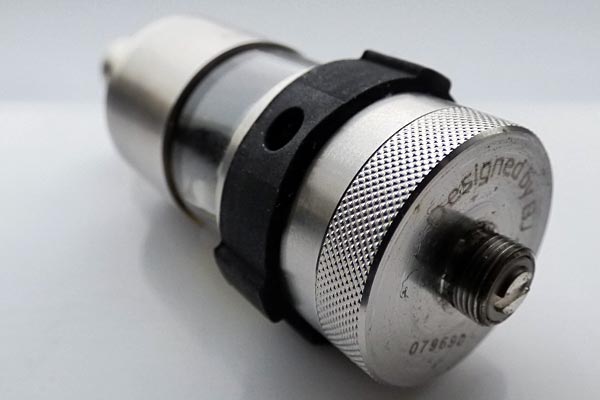 The Aromamizer does not feature top filling but at the very least it is very easy to fill. Firstly you remove the deck/base from it you will see a circular set of juice holes in the main tank. You will have no difficulty filling since the holes are quite generous. If the tank did not have such a large capacity I might have bothered by the lack of top filling but considering the SC200 holds 6ml of juice it really is a non-issue. 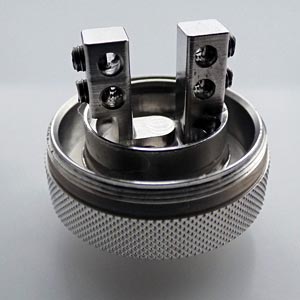 I went for a very straightforward dual coil build using 28 AWG Kanthal and the final resistance was around 0.8ohm. Both coils were wicked with Japanese cotton.  As stated earlier the new deck is a complete doddle to work with and I don’t foresee people having major problems. Even dual builds are very straightforward to do so if you haven’t attempted one before this is a good atomizer to practice on. Due to this having a Velocity style deck you can happily set up vertical coils if you wish.

If you are interested in any builds for the Aromamizer then please do consult the forum because POTV member Scrumpox is something of an aficionado when it comes to this atomizer having used it a lot and he can guide you much better than myself since I only ever get to spend a limited amount of time with review items. Check out this forum thread for more information.  There is a huge amount of information on there for different builds and help with issues so if you have one of these tanks or are interested in trying one then grab a drink, settle down and plough through it! 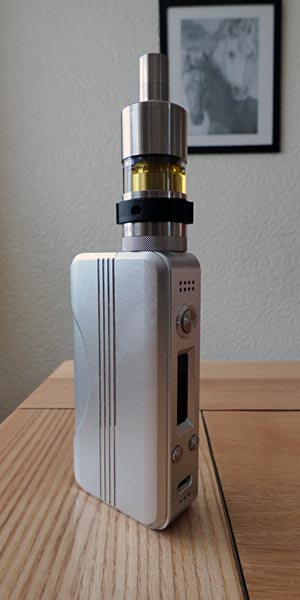 I was typically vaping this atomizer at 24W and it is a really good vape. Flavour was very good and certainly approaches some of my RDA's when using 50/50 or 60/40 juice. When using high VG I didn't find the flavour as good but that is probably down to my individual taste buds because I only get good flavour from that kind of juice with certain tanks.

I did find that going slightly higher in wattage than I typically would for the resistance used led to the Aromamizer performing better and being more flavoursome. If time allowed I think I may have tried a Ni200 build in this atomizer because I think that would really make it shine! A vertical dual coil set up would also lead to a further improvement in flavour.

Rest assured my taste bud issues aside the Aromamizer does make for a very enjoyable vape but it is one that has quite an open draw which is very airy and loose. One thing this atomizer does really well is its very generous cloud production and it certainly does put out plenty of vapour. The generous capacity is also more than welcome and I didn’t feel like I was constantly having to refill it.

The Aromamizer offers a very good vape which should appeal to most vapers. I did actually like the original version of this atomizer at the time and the only major gripe I had with it has now been addressed with this new easy to use deck. This one major change makes this version far more approachable to rebuildable newcomers!

Prices for the RDTA have been dropping recently and the news of the new V-RDA coming out soon may hint at a new version of the RDTA being on the cards.  We will work to bring you more news about this as soon as we hear anything concrete.

This is a really good atomizer which features plenty of innovation. The Aromamizer is priced very competitively so if you like its looks and features then this is well worth picking up!