Hello readers and FM fans. Today we are going to be looking at the Wotofo OFRF NexMini Pod system. This was kindly provided to me by Wotofo to whom I have no affiliation. What follows are all my own thoughts based on my own experiences.

The first thing you’ll notice about the packaging is that there is no mistaking what it is, it’s right there emblazoned on the box standing out like the Bat signal on a clear night. The box itself is pretty standard plastic packaging which contains: 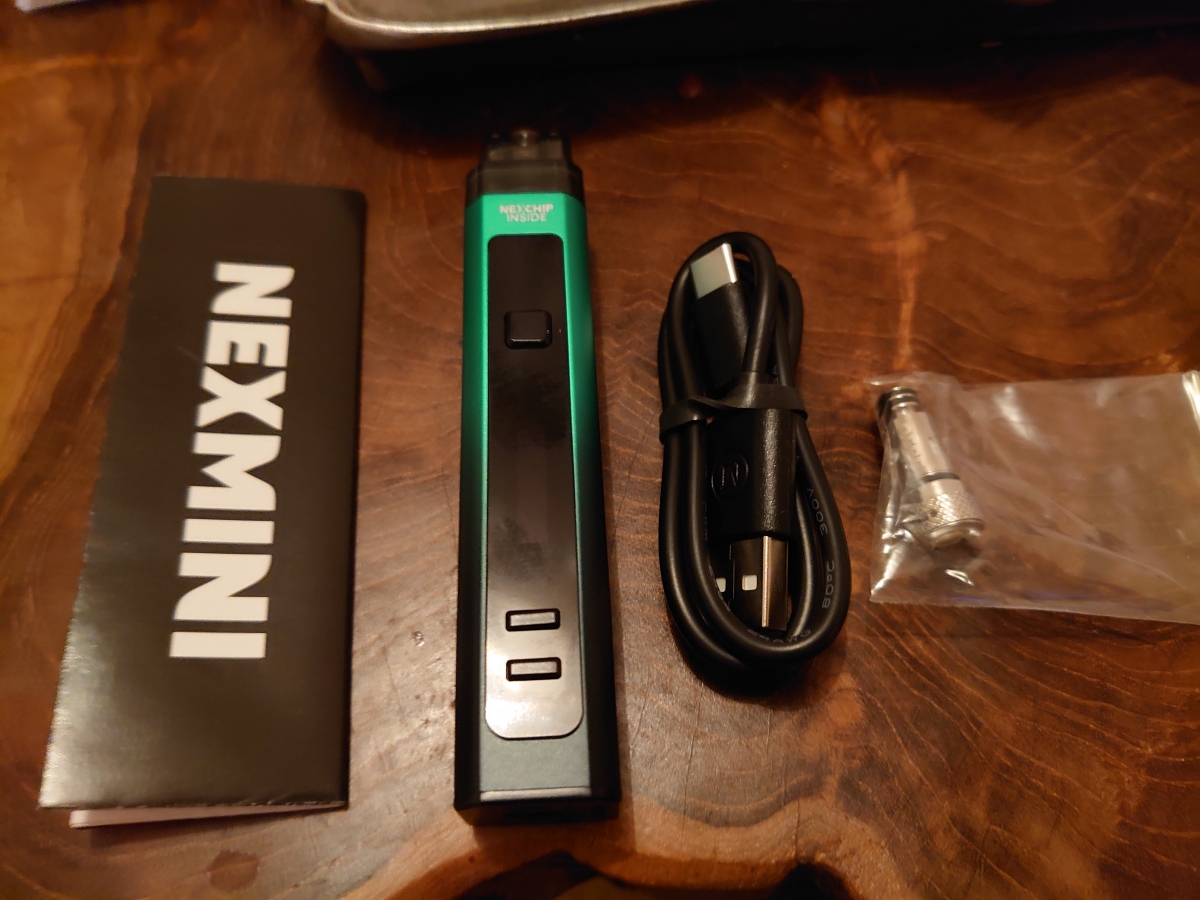 The OFRF NexMini comes in a range of colours which are silver, black/red, black/green, black/blue, silver then the bling, gold, and mocha gold. I’m not sure what mocha gold is as I thought mocha was brown. Anyway, enough about my pantone reference ignorance and onto the specs:

This is all powered by what they call “nexM Technology” and the device has a “NEXCHIP INSIDE”. In my head I hear that little jingle from that computer processor manufacturer, you know the one.

When you take the device out of the box, the first thing you notice is just how light it is. Weighing in at just 56g, it’s light due to it being made from an aluminium alloy, yet it feels sturdy and comfortable in the hand. Give the device a spin and check it out from all angles and you’ll realise there is enough branding on this to make Lewis Hamilton blush, it’s got more logos than his F1 car. 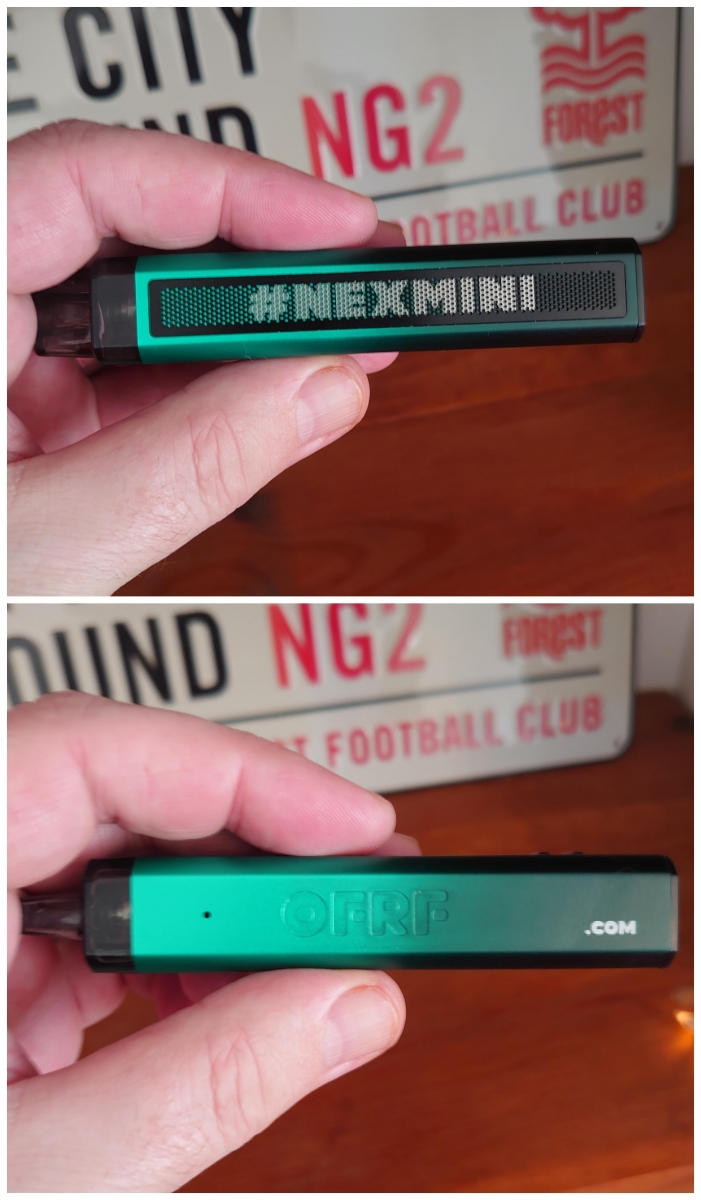 Whether or not you like this and want to be posting #NEXMINI to your social media is up to you and is personal preference. For me, it’s all a little much and I’d prefer it to be more subtle.
The usb-C charging port is on the bottom of the device, and there are small airflow holes on two of the sides. Then you have the screen and buttons on what I’ll call the front. There are three buttons, the fire button and then two smaller buttons which are to change the wattage up and down. Five clicks of the fire button turn it on, five to turn off, three to lock the device, and if you press the fire button and the up wattage button, it resets the puff counter. Pressing the wattage buttons you can go up to 30W in 1W increments then it cycles back to 1W, and vice-versa. The buttons themselves are all quite small but are easy to press. The screen shows the basic information – wattage, ohms of the coil, puff counter, battery %, and voltage. When you press the fire button, the wattage becomes a puff timer but you aren’t going to see that telemetry as the instant you let go of the firing button, it changes back to the wattage display so there just isn’t the time to check the puff length figure (which will max out at 8 seconds and the device will stop firing) on the screen before it’s overtaken by the wattage. The screen also seems to be framed. If you look closely enough, you can see it on the screen in the corners. Quite why this is here, I don’t know, it’s not a major issue admittedly but worth noting. Looking at the front of the device at the buttons and the screen, I can’t help thinking there’s wasted space as there is room for larger buttons and a larger screen which, to me, would have improved the device. 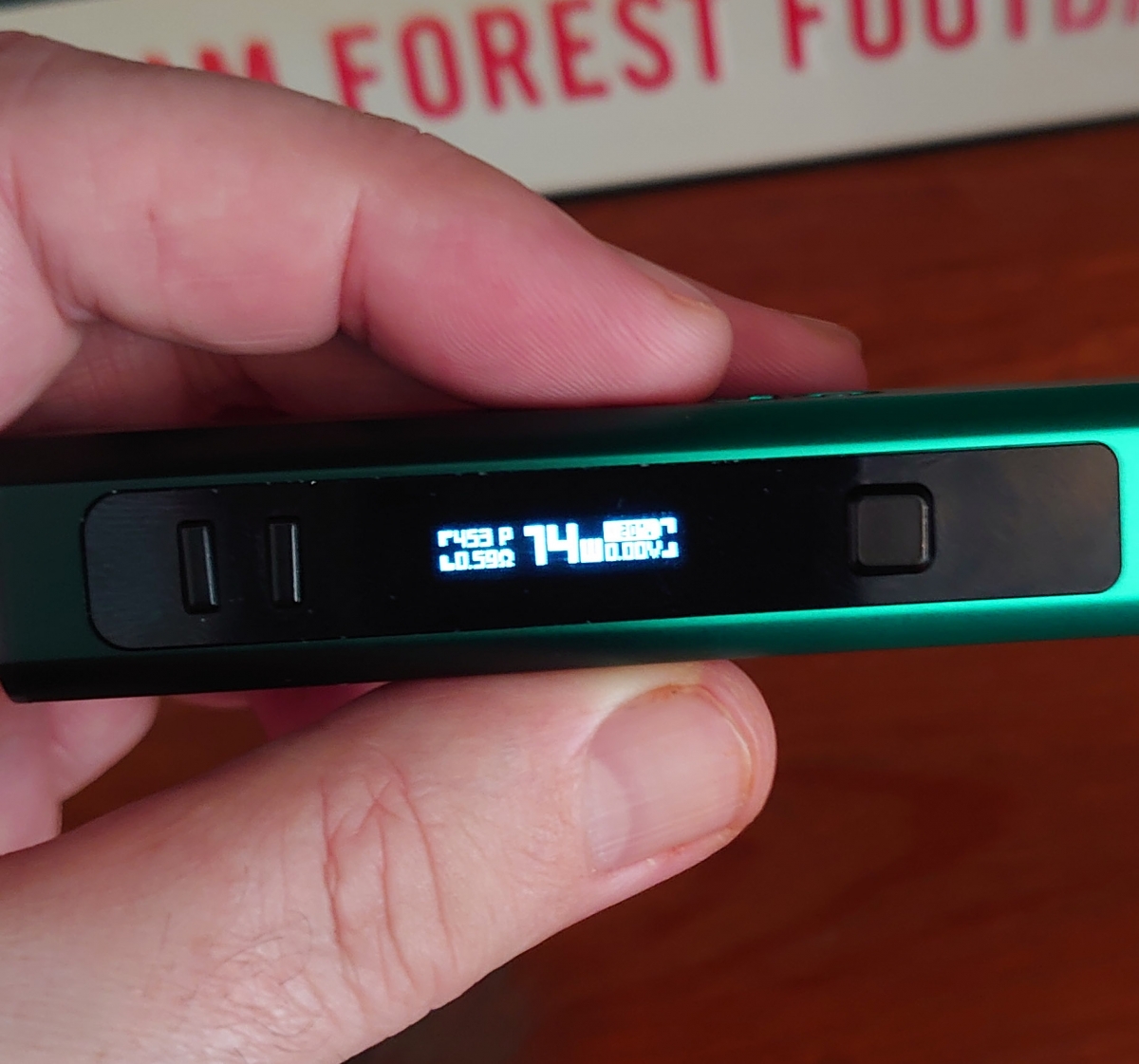 The Pod and Coils

The pod itself is slightly tinted dark and it doesn’t really pose a problem when looking at the liquid level in the pod. It can be tricky in low light, but most of the time it’s easy enough to see. It’s a basic pod, the fill port is easy enough to access and you peel back the rubber bung to reveal the reasonably sized fill port. There’s a “Min” level indicator on the side of the pod, but as it’s etched into the pod, it’s virtually impossible to see. There are four strong magnets on the bottom, and the coils are push and pull to fit. The fitting is quite tight and the coil doesn’t protrude that much beyond the magnets, this meant that, as I have quite large (but beautiful, just check the pics and you’ll see) hands and fingers, I found it a little difficult to remove the coils from the pod.

The adjustable airflow for this is on the bottom of the coils. There is a little metal ring which you turn to open and shut the airflow by covering the holes. There are airflow holes on both sides of the coil so if you leave one showing, then in reality this is two as the hole on the back is open as well. Just as I struggled with removing the coil, I found that my fingers were a bit big to easily adjust the airflow and I had to grip with the ends of my finger and thumb to turn the dial. One other thing to note is that printed on the coil is the “best” wattage range and not the full wattage range of the coil. 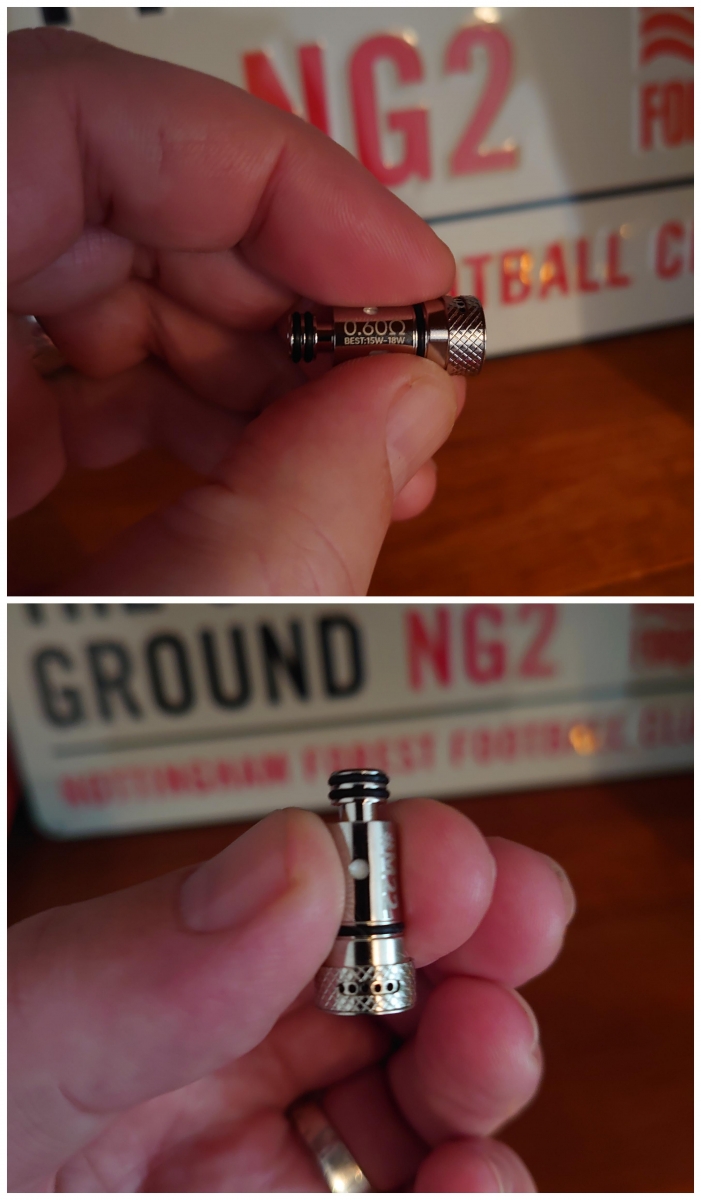 So, we’re on the starting line to see how this performs. Will it be a winner, or will it retire early to the pits?

Fully charged, I primed the M22 mesh coil, let the liquid soak in and popped the pod in. It doesn’t set the wattage for you, but this is easily adjusted using the up and down buttons. With the airflow wide open, it gives a relatively smooth, loose draw and good flavour. I’m a fan of a tight MTL draw, and luckily you can adjust the airflow and tighten it right down to a cheek sucking inducing draw. My sweet spot was with half a hole open which gave a nice tight draw, however this seemed to come at the expense of some of the flavour. If you tighten the airflow down to anything below two holes (two on either side so four really), then the flavour drops off somewhat. I adjusted the wattage to cover the full range and found the best for flavour to be at 15W with this coil.

I was sent a second pod for review so I got out the M21 parallel coil and went through the same procedure. This coil has a higher wattage range and I found the best to be 19W but with one hole showing on the airflow. This gives a warmer vape, but the flavour is really good with this coil. The M21 is definitely better than the M22, but the airflow seems slightly more turbulent, so the coils are a bit like Hamilton and Bottas.

At the wattages for the coils, the 800mAh did a good job but it didn’t last me all day. It charged from empty to 100% in approx. 45 minutes and supports vaping whilst charging. When charging, there is no indication that it is doing so, the screen turns off and you have no idea if it is actually charging or not and can’t clearly see when the battery is full. The only way to check is to press the fire button to turn the screen on and have a look.

OFRF claim that the pod connection is waterproof and I was intrigued to see if this was true and whether the pod leaked at all. Neither of the pods leaked, which is great, and I only got some slight condensation under the pod but not enough to trouble any device really. I felt I had to test this out, so the only way seemed to be to put some liquid deliberately into the connection. Surely I wouldn’t do that would I? I’m nothing if not thorough, so yes, I did indeed. I squeezed a few drops of liquid into the connection and left it overnight, popped the pod on and took a vape and it all worked as intended, impressive. 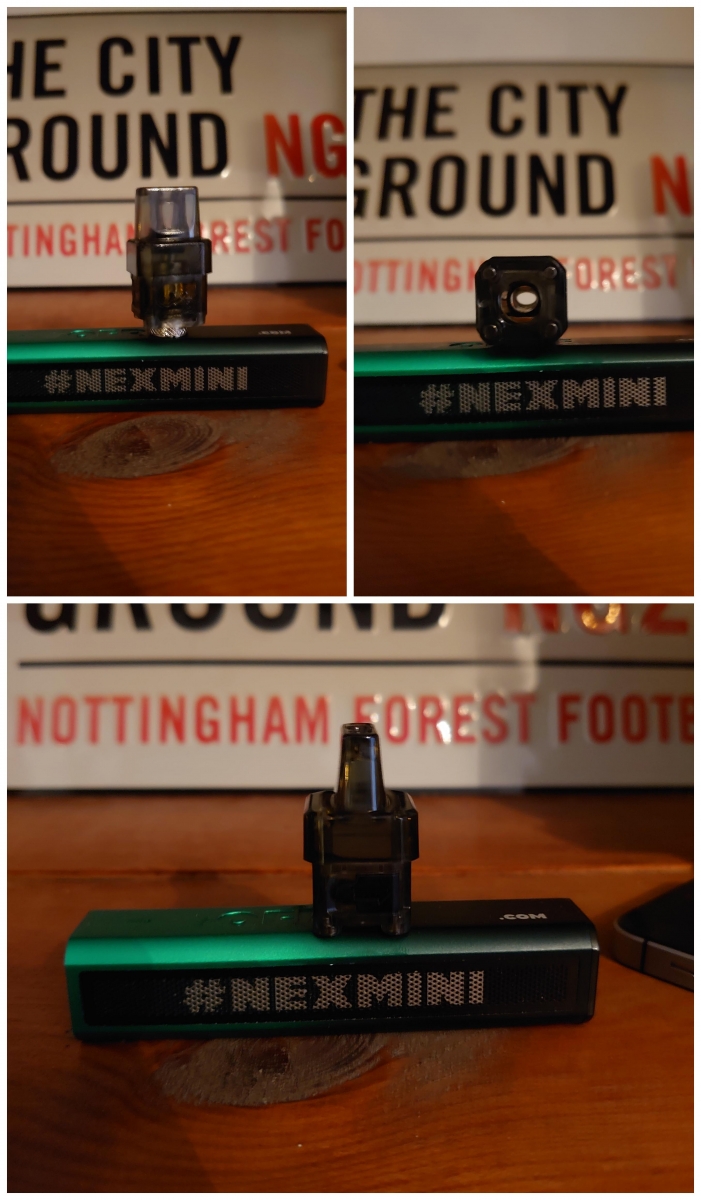 I found this device very conflicting. I think there are some great things here, but there are also quite a few downsides. It’s like Sergio Perez, lots of potential but somehow never really fulfils that. The flavour on the M21 is really good but the airflow is turbulent, the flavour on the M22 doesn’t quite match the M21, and the it seems to drop off if you tighten the airflow. The airflow has a wide range from really loose to really tight which is superb, but you have to remove the pod to adjust and it can be quite tricky. The screen is basic, the buttons need to be bigger, and I’m not a fan of the branding but it’s light, portable, charges quickly, and the flavour is really good from the M21 coil. Having said that, the airflow isn’t particularly smooth and because of the wattages required to get the flavour, it may be too warm for some.

There’s a lot to like here, but there’s also a lot that I feel could be improved. I’m glad I’ve tried the #NexMini but it’s not a device I will continue to use. 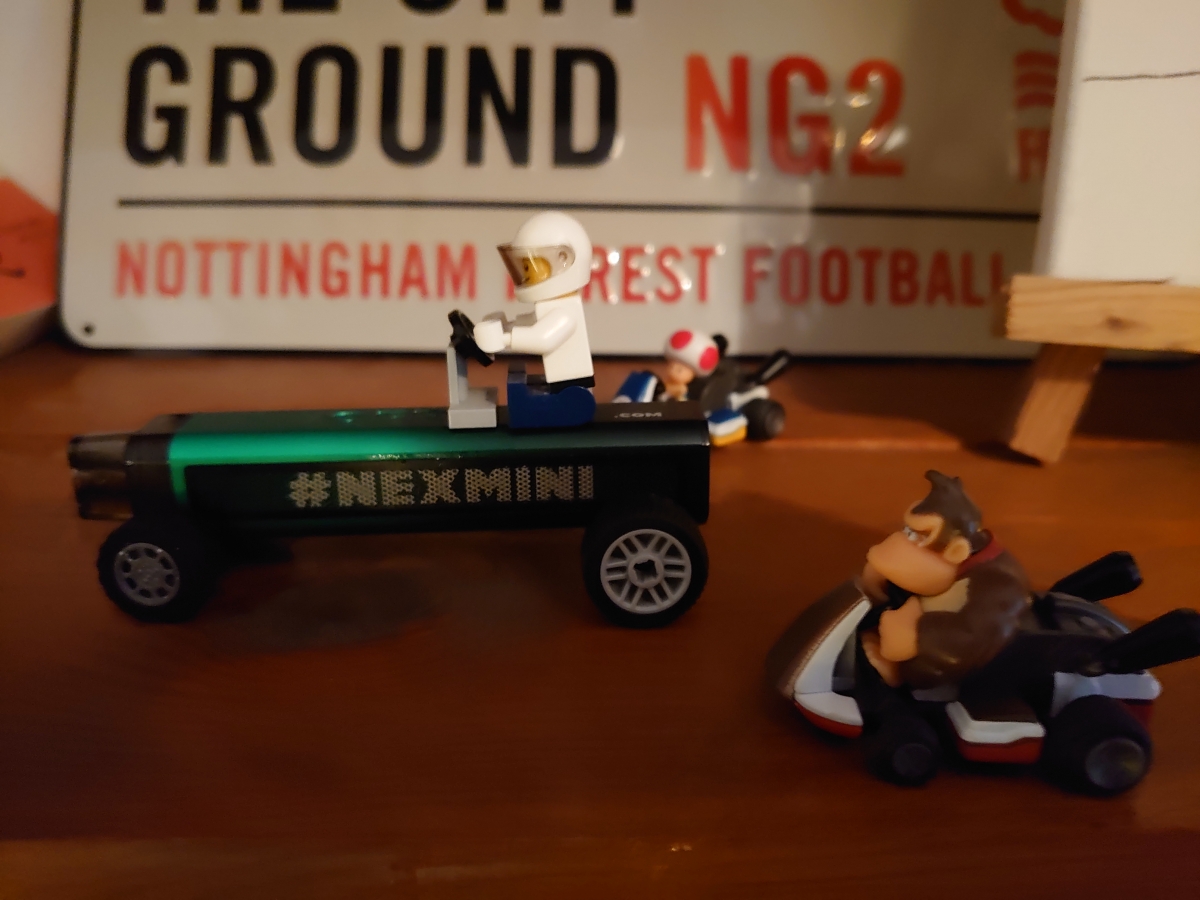