Wotofo has sent out the Manik, their entry into the crowded “pod mod” scene, for us to take a look at. Wotofo admits on their own page for the Manik that the shiny metal finish with “premium leather” insert isn’t unique, but they do have a reputation for making good coils, so will this be enough for this kit to pull ahead of the competition?

The Manik comes in the customary Wotofo packaging and, whilst this may look great, it doesn’t make for a good unboxing experience as, once again, the clear plastic lid was tightly welded to the cardboard box. The lack of simple finger cutouts in the plastic make this doubly frustrating as you initially can’t get a grip of anything, Wotofo seriously needs to rethink their packaging! Inside the box, there’s the Manik itself, two coils, a usb charge cable and a couple of pieces of paperwork including a guide for inserting and removing the pod. 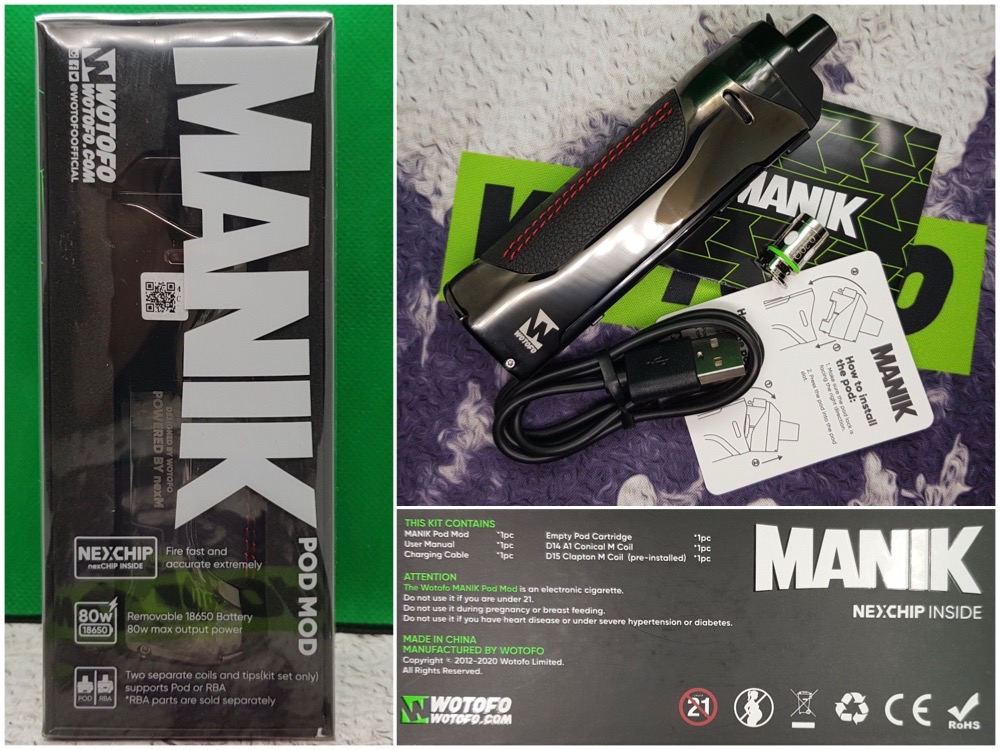 The Wotofo Manik follows the now familiar design pattern for a pod mod with a slender zinc alloy chassis with controls and a 0.96 inch colour screen up front, a “premium leather” grip on the back all topped off with a pod. Overall it looks quite clean and feels well balanced in the hand.

The main chassis is apparently nano-coated to protect it against wear and corrosion, but it’s really beyond the scope of this review to say how this will hold up over time. The nano coating is also supposed to create an extra smooth surface that’s easy to clean, good job too as this “prism black” version I was sent for review is an absolute fingerprint magnet! If this is something that bothers you, then the “nano black” may be more suitable as, from what I’ve seen online, it has a more matte finish. The “premium leather” patch, with stitching for extra grip, appears to just be stuck on with glue so I’d say this is likely to come away with extensive use. 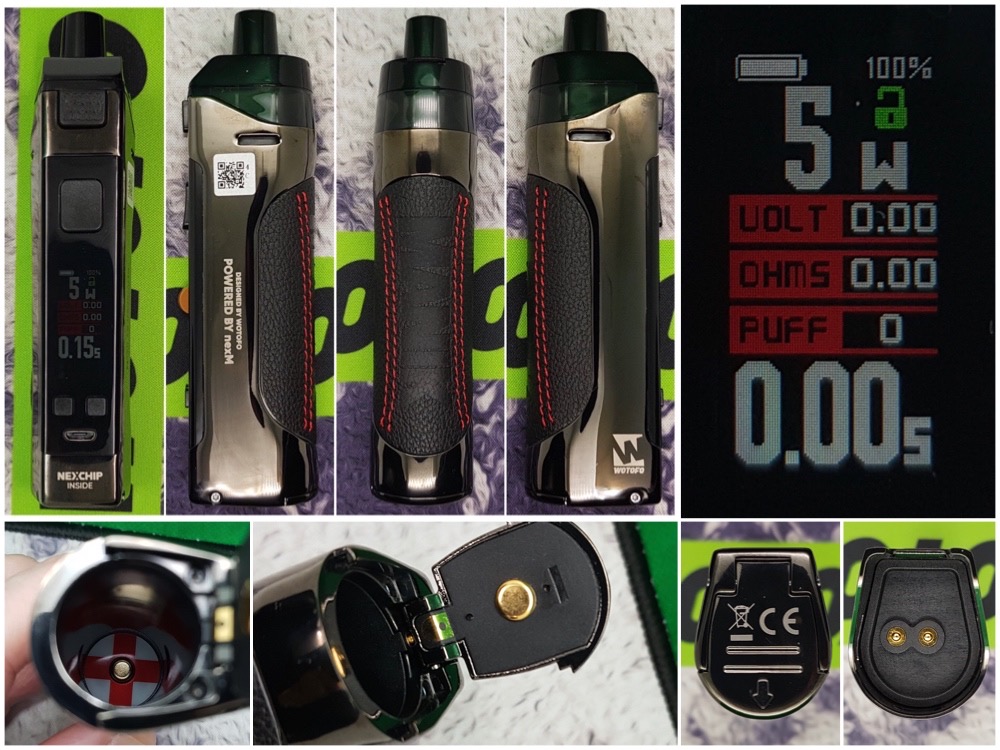 The pod is clipped into the top of the Manik rather than using magnets which ensures a secure connection so you don’t need to worry about it getting lost in pockets and the like. There are two fairly large spring loaded connectors in the top, and the whole area is supposed to be waterproof although I’ve not experienced any leaking from the coils and only minimal amounts of condensation. Airflow sadly isn’t adjustable, but unlike many other pod mods of this type where the airflow slits open directly into the base of the coil, the side of the pod actually protrudes slightly below this level and deflects the air down. I’m assuming this has been done to smooth out the airflow, and this does appear to have been successful as the Manik doesn’t end up sounding like a demented kazoo like some other kits I’ve tried in the past.

The front control interface is well laid out, although I did find my finger hitting the pod release catch rather than the power button on more than one occasion especially when thumb firing. All the buttons have a nice positive click and there’s zero button rattle which is a bonus. Controls are all intuitive with wattage adjustable in one watt increments and a round robin feature. The Manik features Wotofo’s latest nexCHIP with a 0.001 second response time and all the modern safety features you would expect. One area that is a little disappointing though is the screen, it’s situated behind a darkly tinted panel and whilst this is fine indoors, it can make things a little difficult to see when you’re outside.

The Wotofo Manik is powered by a single 18650 battery and the battery compartment is clearly labelled both on the door itself and at the base of the battery tube. The door shuts securely and I’ve had no issues with it coming open in pockets etc. Should you need to charge your battery in the device, I recorded a peak charging rate of 1.3 amps via the usb port. 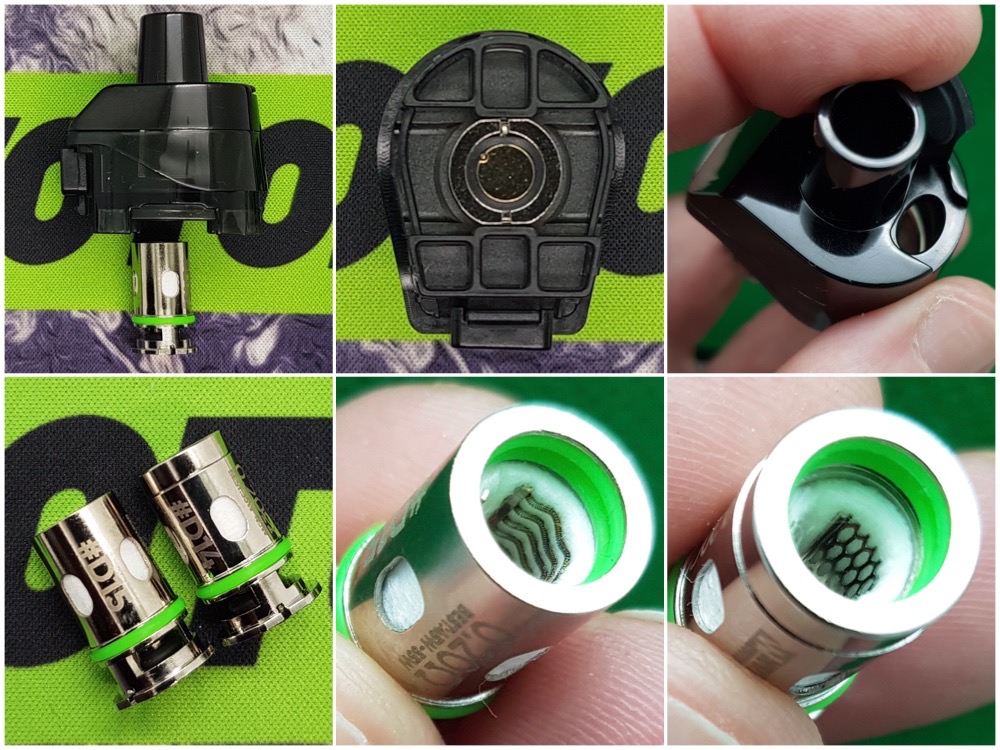 The pod itself features coils that are push fit in from the bottom, they do have two flat edges that need to be lined up correctly for a proper fit, and if you can’t find any Wotofo coils you also have the option to use Vaporesso GTX coils or Voopoo PnP coils. There’s a very generous fill port on the top which means you don’t need to constantly remove the pod to refill, and filling is easy and mess free, however the pod is made from a tinted material which can make it difficult to see your liquid levels.

Two coils are included in the kit, a #D15 0.2 Ohm “Clapton mesh” and a #D14 0.2 Ohm conical mesh. Once again I can find no mention of coils materials, but I suspect that they are the same as the Wotofo nexMESH tank that I reviewed recently.

I started out with the #D15 “Clapton Mesh” and this gave good flavour across the quoted power range (45~55W), but I found it best at 50 watts. I believe this probably has kanthal cores with an outer nichrome clapton so due to my nickel intolerance isn’t something I can use for long periods, a great coil if you’re not sensitive though.

Next up was the #D14 Conical mesh, again performance was good across the range (35~40W) and perhaps even a little beyond this at 45W although perhaps not quite as full bodied as the clapton coil. Again coil material isn’t stated but I suspect it's either kanthal or most likely stainless steel from Wotofo’s previous coils.

Wotofo also sent out packs of the #D11 and #D13 coils for me to try, these come in packs of five with each coil sealed in a bubble pack.

The #D11 coil has a much tighter weave mesh, performance was great even at the minimum 45 watts. Going off previous wotofo coils, I believe this is a stainless steel mesh. This is easily my favourite out of the stock coils.

The #D13 has a loose honeycomb kanthal A1 mesh rated for 37 to 43 watts. Performance was again excellent across the range, but was best above 40 watts.

Wotofo also has also teased an optional RDTA pod similar to the one found in the OXVA origin X that I reviewed recently. Unfortunately this isn’t ready yet and I’ve been led to believe this will probably become available in the next month or so. 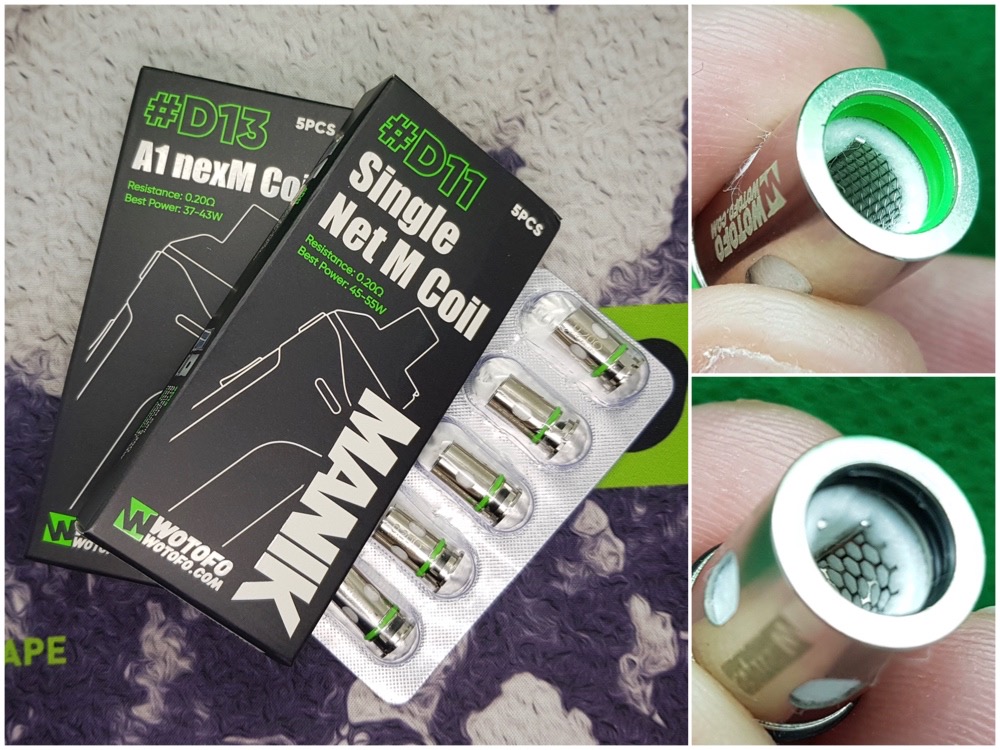 The Wotofo Manik easily rivals many similar pod mods, and the ability to use Vaporesso GTX coils or Voopoo PnP coils should you run out of Wotofo coils is a bonus. Whilst I’ve been more than happy with the performance from the stock coils, I suspect that much like the OXVA origin X I reviewed recently, where this kit is really going to shine is with the optional RDTA pod. Hopefully Wotofo will send that out for a follow up review once it’s released (hint, hint). 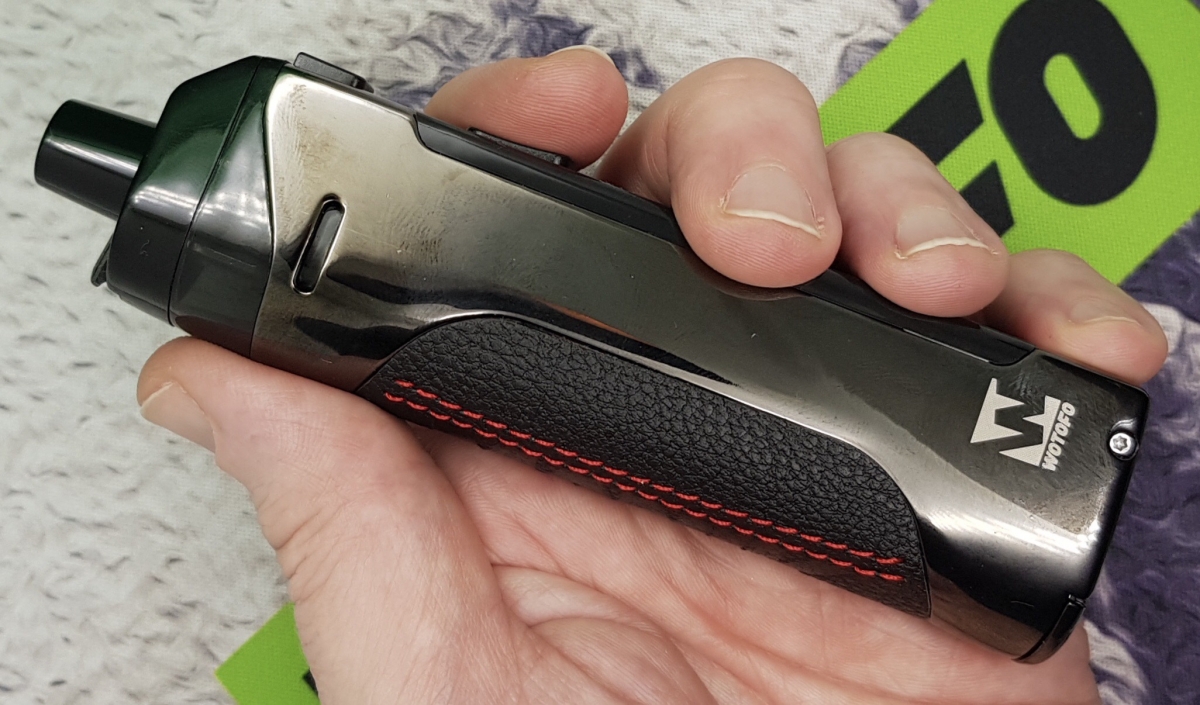