Vapesourcing have been kind enough to send out Wismec’s late entry into the 18650 “pod mod” market so let’s take a look at how it stacks up to the competition. 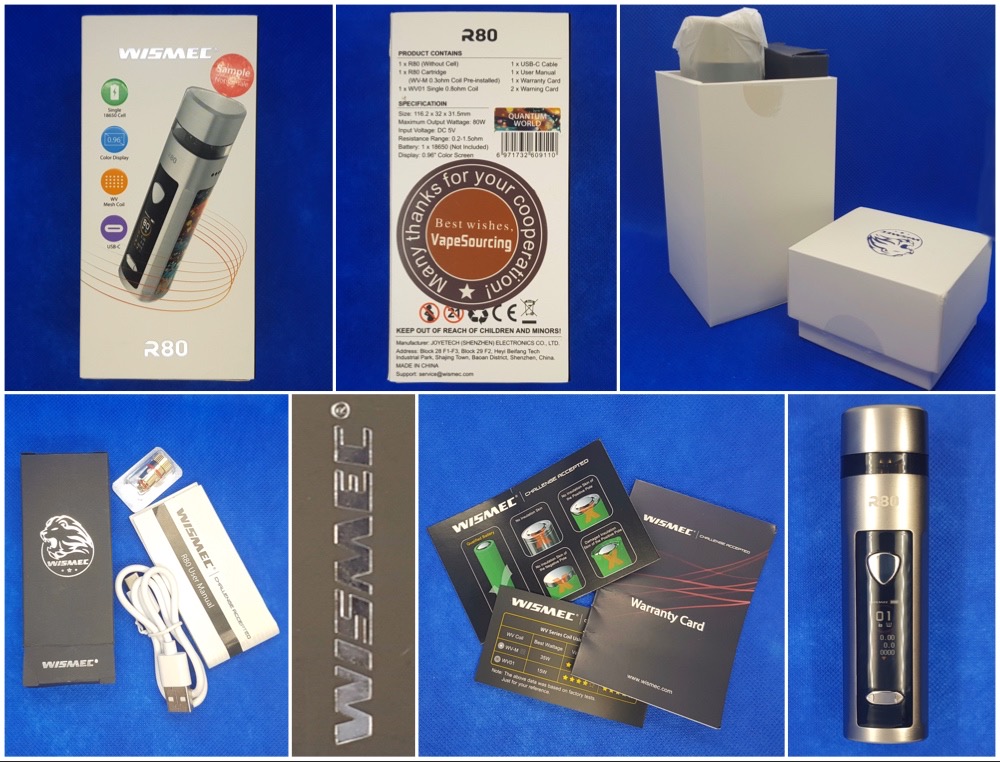 The Wismec R80 pod mod comes with a cardboard outer sleeve showing a large picture of the device on the front and list of contents on the back. Lift this away and you’re left with a more robust white cardboard box which unusually opens from the top. Inside you’ll find the Wismec R80 itself, the usual paperwork and a second smaller box containing an instruction manual, usb-c charge cable and a spare coil. Overall a very pleasant unboxing experience. 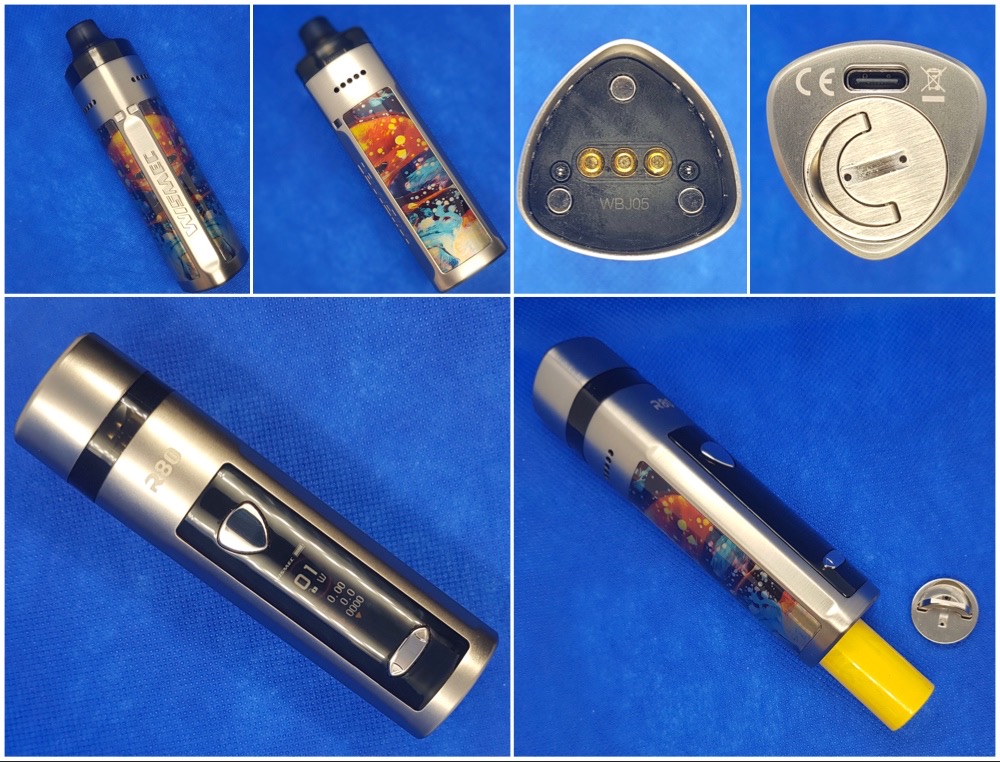 On to the device itself, it feels quite chunky and heavy in the hand with its distinctive style taken from the Wismec reuleaux line of mods. Despite appearances though, it’s actually a similar size and weight to the Voopoo Vinci X at 116.2 x 32 x 31.5mm and weighing in at 111 grams.

There’s a bright 0.96 inch colour display and the fire, up and down buttons on the front. The fire button has decent, tactile feedback, but the up and down buttons feel dull and squidgy. There’s zero button rattle. The full 80 watts on offer is selectable with the up/down buttons so be careful not to burn out your coil, and you can lock these buttons by pressing up and down simultaneously. The two other sides have large plastic inserts in your colour choice, with five airflow ports directly above these to smooth out any turbulence. Down the back is a large embossed Wismec logo with a lanyard attachment. Quite why you’d want to use a lanyard here is beyond me as, with an 18650 battery inserted, I suspect it would become quite uncomfortable in extended use. I do find this helpful though as it gives a good tactile cue for which way round the mod is positioned in your hand.

Up top is the recess for the pod with three very robust looking spring loaded connector pins along with three magnets to hold the pod in place. From this angle (or from the bottom), you can also more clearly appreciate the classic reuleaux shape. Finally on the bottom there’s a usb-c charge port and the battery cap. Wismec claims 2 amp charging, and in my tests it peaked around 1.7 amps. As always, I would recommend the use of an external charger wherever possible but it’s a nice feature when you need or have to use it.

The battery cap is the screw in kind and can be opened using either the integrated handle or with a coin using the cleverly designed slot cut into the base. The battery cap has two small holes for emergency venting, and is clearly marked with a negative symbol, and looking down into the battery tube, there’s a large positive sticker so there should be no doubt about correct battery orientation. There is, of course, reverse battery protection alongside all the other safety features you would expect from a modern regulated mod. The threads on the battery cap do seem a little coarse and grindy especially out of the box. In fact, I was initially concerned I might wind up cross threading the cap, but this does seem to have broken in a little with use. 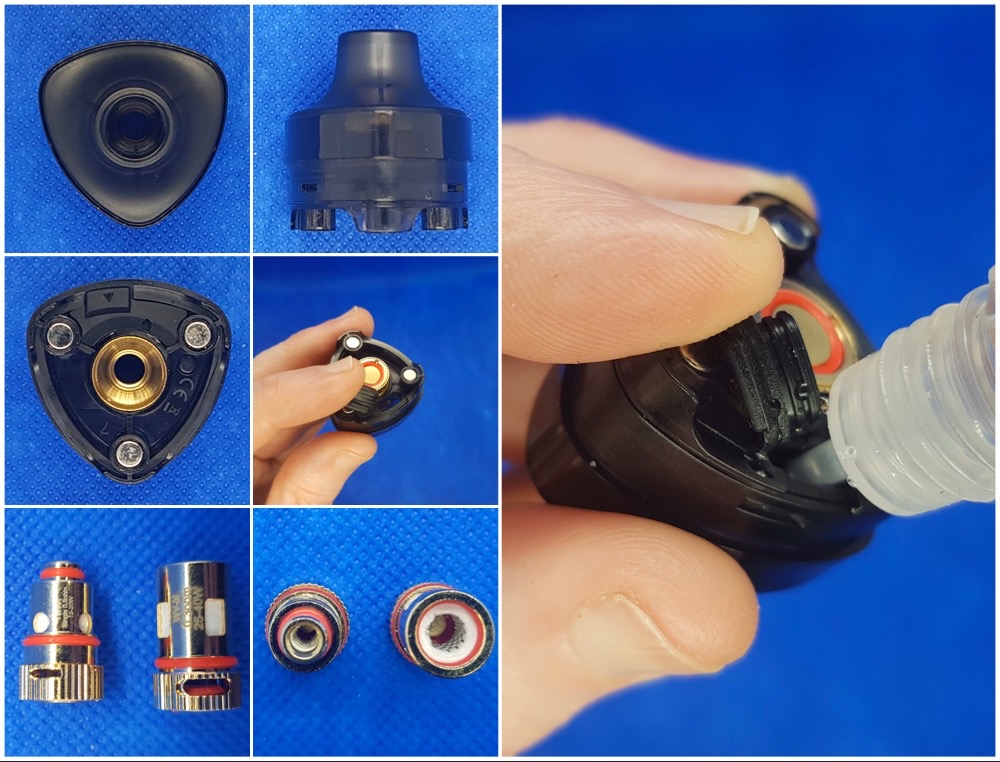 The pod itself carries over the classic reuleaux shape and comes in 2ml or 4ml varieties depending on your region. It’s made from a dark smoked plastic which, combined with the unusual shape, makes it especially difficult to judge how much eliquid you have left. I found the best way was to hold it against something bright like a phone or tablet screen, but even then there’s definitely a bit of guesswork involved! The top of the pod forms a peak which serves as the drip tip and is surprisingly comfortable to use, and there’s even an included dust cap if you're concerned about pocket lint finding its way in. Coils are push fit from the bottom, and the fill port is also located here. After a week of use, I’m officially calling this the stupidest location for a fill port in existence. It is right between two magnet posts and directly next to the coil with a slight inward slope towards the coil itself. This position makes it difficult to get any eliqiud bottle into, and I’ve yet to fill the pod without juice going everywhere. Paper towels are a must to clean up the mess before inserting the pod, but even this isn’t without its hazards as I’ve then dislodged the rubber bung on several occasions.

Two coils are included in the package, a preinstalled 0.3Ω kanthal mesh coil for direct lung vaping, and a 0.8Ω round wire nichrome coil for mouth to lung vaping. If you have any metal sensitivities, this may be something to consider before purchasing, especially with the 0.8Ω coil. The coils have an integrated airflow control built into the bottom of the coil to allow you to fine tune your experience as well, which is something not seen on many competing systems.

I found the 0.3Ω coil gave a similar experience to anything on offer from smok or Voopoo, with a slightly warm and flavourful vape and a restricted direct lung hit with the airflow fully open at around 35W. The 0.8Ω coil gave a much more restricted, loose mtl vape, and performed best at around 16W with the airflow cut in half. As a direct lung vaper, my pick here is obviously the 0.3Ω coil.

I did experience a fair amount of condensation and occasional leaking from the bottom of the coil, especially the 0.3Ω coil, although I suspect some of the “leaking” may have in fact been down to the mess caused when filling so I definitely recommend checking the contact pins and giving everything a wipe down whenever you remove the pod for filling etc. and I probably wouldn’t recommend leaving the pod sat for extended periods of time with eliquid inside to be safe.

I thought the coils looked familiar, even with that integrated airflow ring, and closer inspection showed them to be very similar in size to Voopoo Vinci/pnp coils. Out of curiosity I tried a Vinci 0.6Ω coil and it did fit and worked fine, although you do obviously lose the adjustable airflow option. The opposite is also true with the Wismec coils working in the Vinci, good to know for future reference if you can’t find the correct coil.

A robust 18650 pod mod which equally rivals the competition, the Wismec R80 has a lot to offer and is definitely worth a look if you’re in the market for a pod system but want the flexibility and enhanced battery life from an 18650 battery. Coils have been excellent and the adjustable airflow is a welcome addition. The fact that Voopoo pnp coils also work is an added bonus. I do have to knock points off for the dark pod and that fill port though.

Many thanks to Vapesourcing for sending the Wismec R80 pod mod out for review, and they currently have the kit on offer for just $23.99 when you use the coupon code “R80K” at checkout. 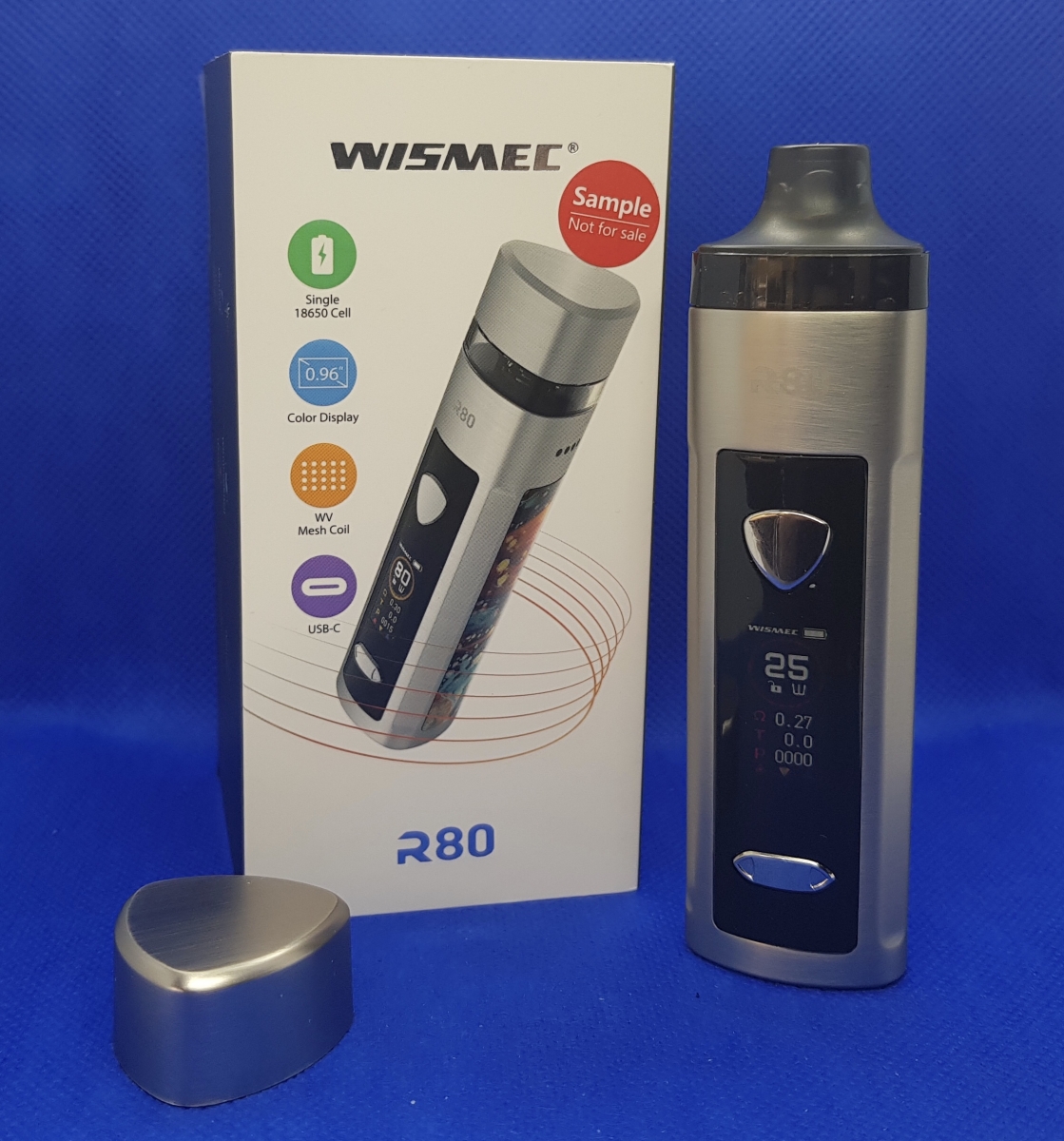