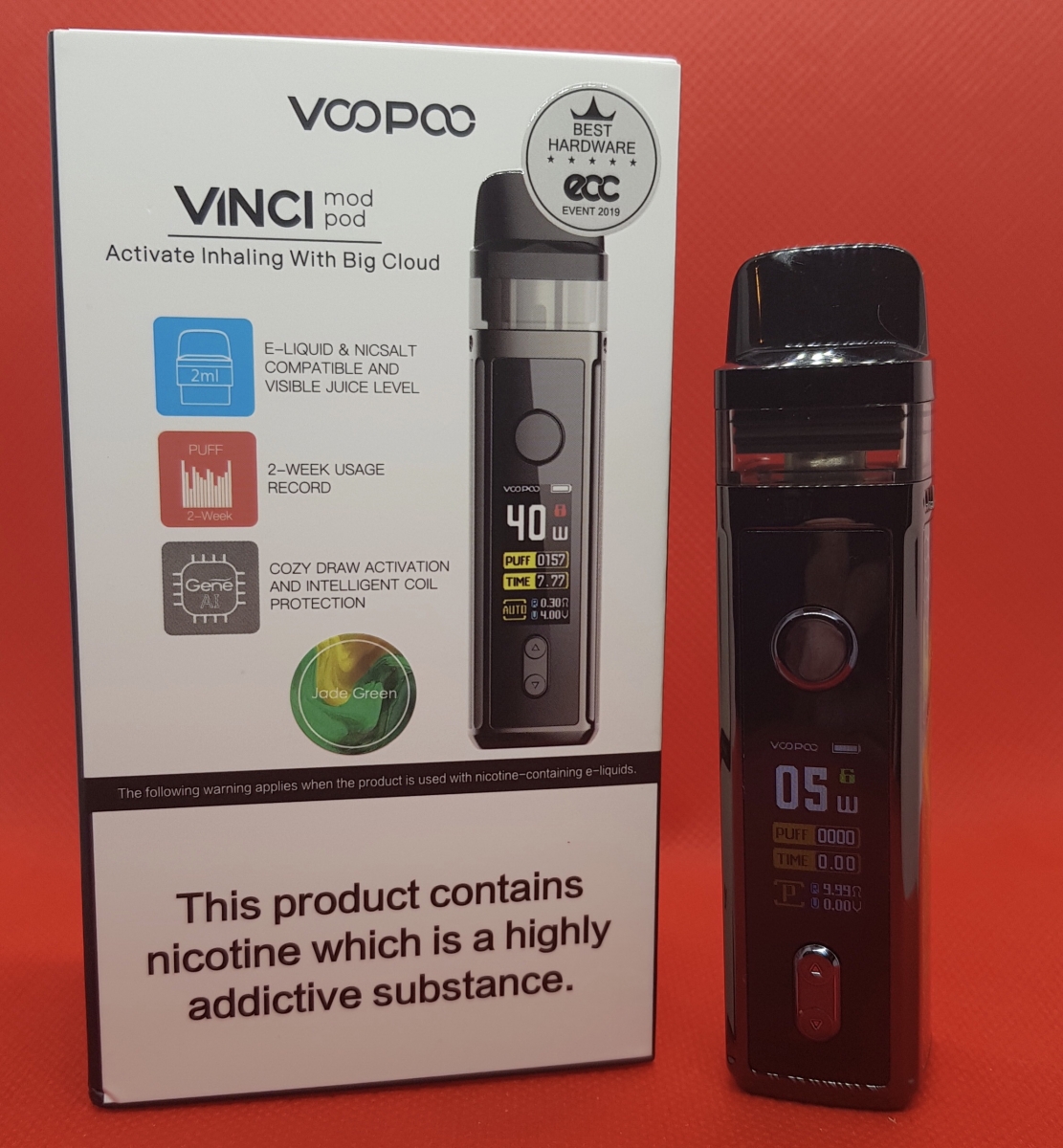 I tried out the Voopoo Vinci at the recent Vaper Expo in Birmingham and thought it was one of the better hybrid pod systems at the event, so when new vendor Newvaping.com offered this kit up for review, I jumped at the chance. So does the kit live up to my expectations after a brief trial at expo? read on and find out. 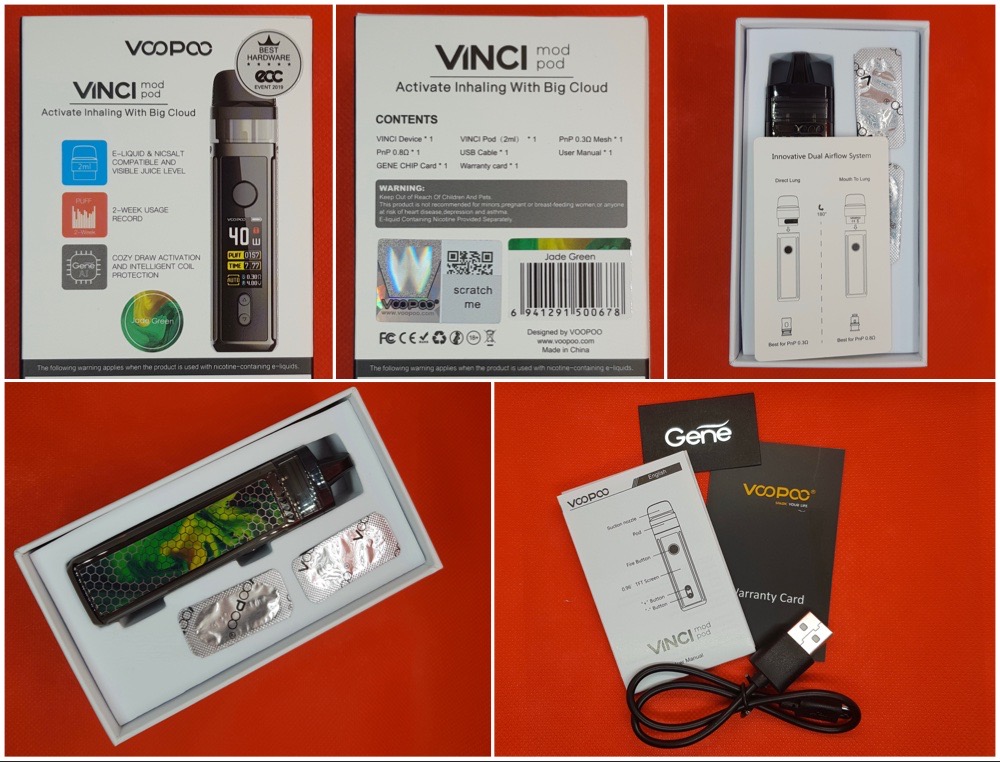 The kit comes in a small sleeved box with all the kit contents and info clearly laid out on the packaging. Removing the sleeve reveals the pod system itself and two included coils, and underneath this is a smaller box containing the usual paperwork and USB cable for charging. 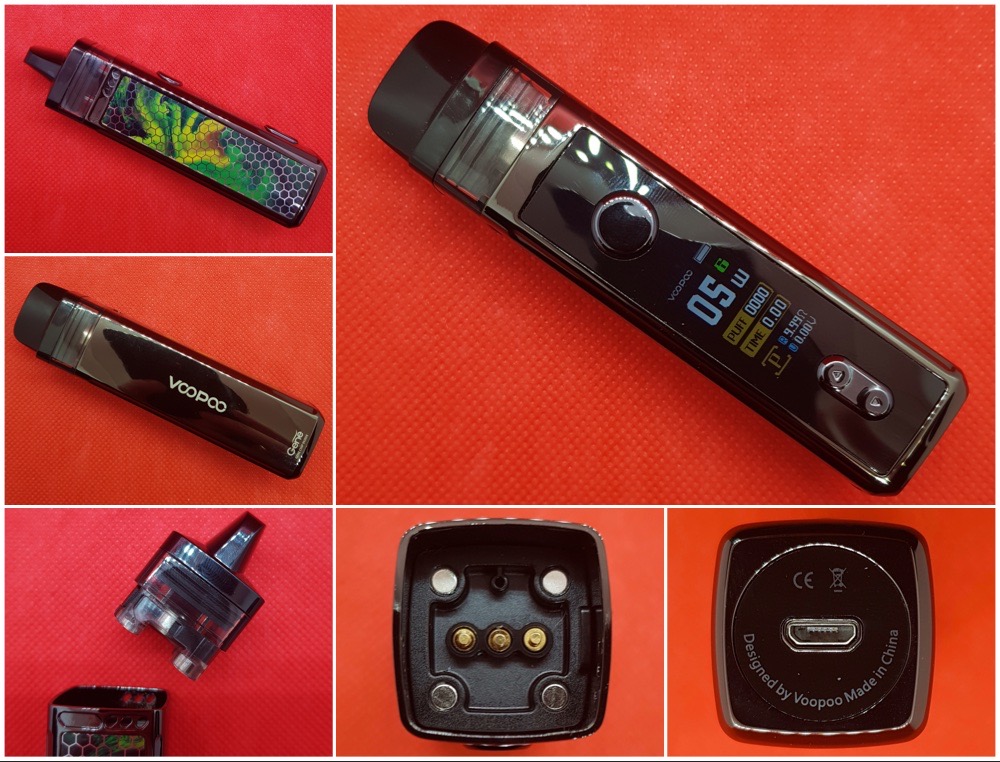 Looking around the mod, the Vinci is fairly small and comfortable in the hand and immediately manages to feel well made with a zinc alloy construction which gives it a decent amount of weight without ever feeling too heavy in a pocket. My review unit came in the jade green finish, and there are a total of ten different colours to suit everyone’s tastes. Both the gunmetal coloured metal frame and side panels have a very high gloss finish to them which does unfortunately tend to attract fingerprints.

On the front of the mod there’s a vibrant 0.96" colour screen which is very clear even when outside. Some of the text is a little small so I needed my reading glasses but the main information like the selected wattage is readable without them. Above the screen is a round fire button and below is the up/down selector button. All the buttons have a satisfying tactile click to them and are easily located without having to look at the mod thanks to their slight protrusion from the main body. I did notice a teeny bit of button rattle in use which I tracked down to the up/down button but it’s minimal.

The first time you turn on the Vinci, you will be asked to set the time. This is so the built in daily puff monitor can track your usage over a two week period. This can be accessed at any point by pressing the up and down buttons at the same time, pressing fire and down will clear your current puff counter, but the data will still be stored in the two week record. Personally I don’t use puff counters/trackers and find this to be little more than a marketing gimmick but of course someone else may think otherwise. You can reset the clock by pressing fire plus up and down if needed, although the clock isn’t displayed anywhere else in the menu or as a screensaver so I’m not sure why you’d want to.

Pressing fire plus up will lock the mod, and pressing fire five times will turn the mod on and off as you would expect.

The pod sits on top and is secured by four very strong magnets, no issues here with the pod coming out in pockets. In fact you can quite easily hold the entire device by the pod itself. Under the pod there are three spring loaded contacts, these feel suitably beefy and look like they should hold up to long term use. One clear advantage of the pods position is that you can actually see the liquid in the pod unlike many competing systems and it doesn’t add much to the overall height of the Vinci either.

Finally on the bottom of the mod there’s a micro USB port for charging. During my tests, the Vinci actually lived up to, and even exceeded, the claimed charging and battery capacity for a change. Charging hit the claimed 1 amp consistently and I recorded around 1600Mah capacity on two charging runs from flat which is impressive.

Two coils are included in the kit, a 0.8oHm round wire pnp-r1 coil rated for 12 to 18 watts and a 0.3oHm mesh pnp-vm1 coil rated for 32 to 40 watts. The Vinci is also compatible with earlier Voopoo pnp coils so if you have a favorite coil from one of their earlier pod systems, those will work here as well. It’s good to see manufacturers use the same coils across a range of products like this as it means you’re more likely to be able to find coils in future and it looks like Voopoo will likely support this system for a long time. Both coils gave good flavour reproduction with the 0.3 ohm mesh coil winning out for me as I’m more a fan of a restricted lung hit rather than a mouth to lung vaper. 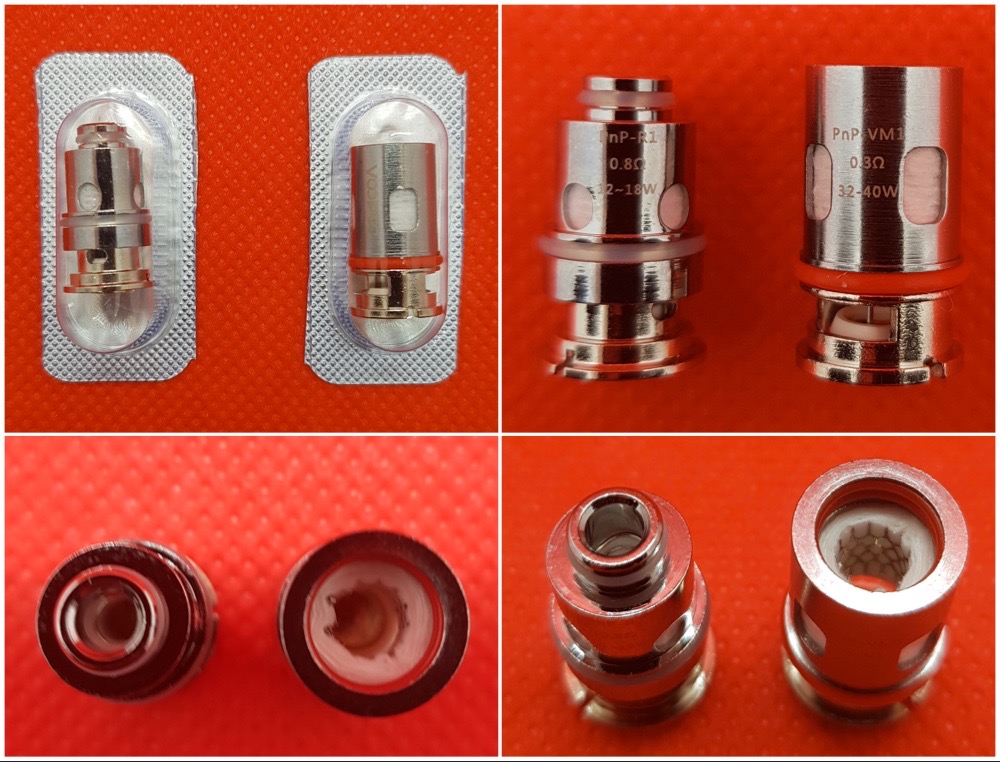 Coils are press fit into the pod from the underneath and the pod has a rubber gasket on one side plugging a generous sized fill port. In use, I found the fill gasket to be a little frustrating, sometimes I can grab a hold of it and pull it free on the first attempt and on other occasions it will stubbornly refuse to budge for no apparent reason which has lead to the occasional bout of foul language! Filling is a breeze even with a 50ml shortfill once you’ve managed to open it up though. 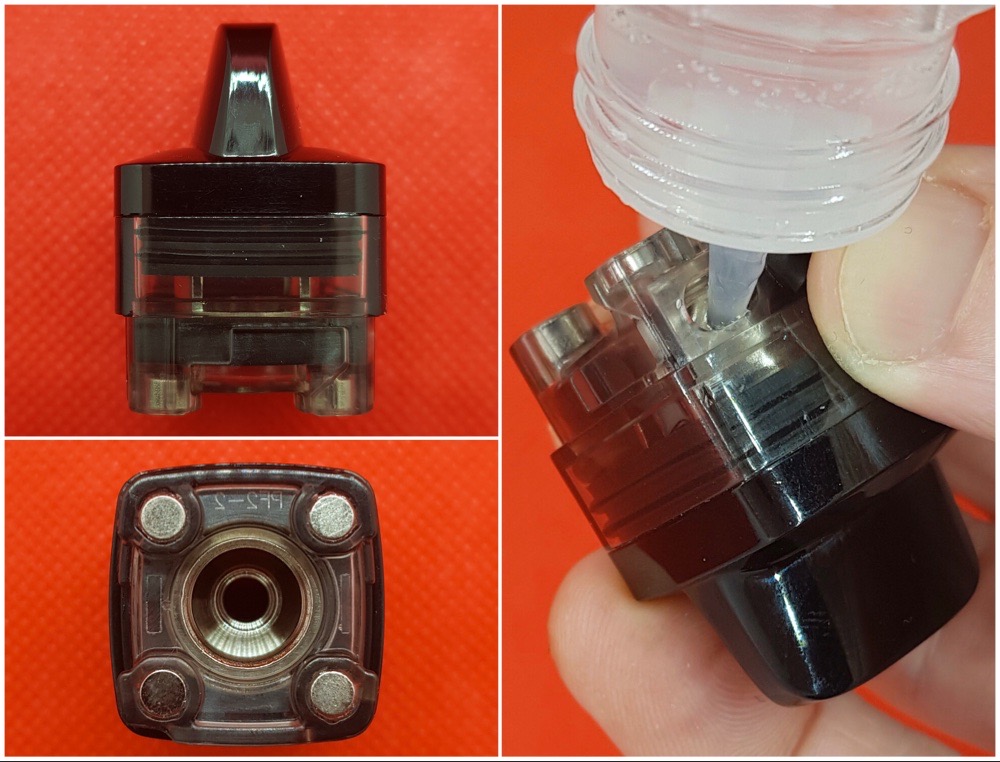 The review unit came with a TPD compliant 2ml pod, close examination shows that the juice reservoir is exactly the same depth as the wicking ports on the 0.3oHm mesh coil which meant that whilst the coil initially felt saturated, it would quickly start to feel a little dry with a slight drop off in flavour. I would say that you can probably use around 1.5ml of the 2ml capacity before this becomes evident so you’re going to be filling up often especially with that thirstier mesh coil. The narrow liquid window created by the 2ml TPD compliant pod also means that it can sometimes be a little difficult to determine how much eliquid you actually have left as well. I feel a lot of this will probably be alleviated with the purchase of a pod intended for the international market which uses the full 5.5ml capacity, this is more a criticism of the TPD rules than the Vinci itself. As with all these pod systems, there is a chance of condensation build up under the pod. I’ve not had any noticeable problems myself but whenever you’re filling these pod style devices it’s always worth giving everything a quick wipe down and checking in at the top of the mod around the contacts to keep everything clean and dry to head off any problems later.

The Vinci also supports an ingenious airflow adjustment system, simply flip the pod 180 degrees to either open the airflow or close it down to suit your vaping style. This is achieved with subtle cutouts on the base of the pod which either leave all three airflow ports open or close two down to restrict the draw. It’s simple and it works brilliantly in practice as well. If you want a super tight mouth to lung draw you can’t achieve this with either of the supplied coils, Voopoo do offer a 1.2 ohm mtl coil in the pnp series but I haven’t tried this myself so I can’t tell you what the experience with that coil is like. The built in mouthpiece on the pod is very comfortable in use as well.

In use there are two ways to use the Vinci, by pressing the power button or using the built in draw activation system. Both work equally well and there’s the option to switch between the two different modes by pressing the fire button three times, personally I prefer to press the button but new vapers may well prefer the draw activation.

One major gripe I do have with the Vinci after living with it for the last week or so is the automatic wattage selection. Depending on the coil you’re currently using, the mod will switch to what it considers to be the optimum wattage. With the 0.3oHm mesh coil this is 35 watts, but I found I preferred this coil at about 28 watts with the airflow in its most restricted mode. No problem you’re thinking, but I’ve found that simply flipping the pod to try the more open airflow or leaving it sat unattended for a while whilst you do something else will also cause the mod to flip back to its default 35 watt setting.

With the 0.8oHm coil it will suggest 12 watts and limit you to a maximum of 18 watts. This is part of the Gene.ai chip from Voopoo which, besides giving you a whole host of safety protections, is designed with new users in mind to prevent inexperienced users from burning out a coil. As an experienced user though this quickly becomes an annoyance and there doesn’t appear to be any way to turn off this behavior either.

Despite a couple of minor gripes with button rattle and the annoying automatic wattage selection the Voopoo Vinci has lived up to my expectations. Great build quality, comfortable drip tip, flavourful coils and better than advertised battery capacity make this one of the better hybrid pod systems I’ve come across recently and I highly recommend it. Newvaping.com currently have the Voopoo Vinci available at just £25.99 which makes it an attractive buy as well and thanks to their U.K. stock delivery is usually between 2 to 4 days within the E.U.

As a special bonus don’t forget to use the discount code “planetofthevapes” at checkout for a generous 20% off your order as well. 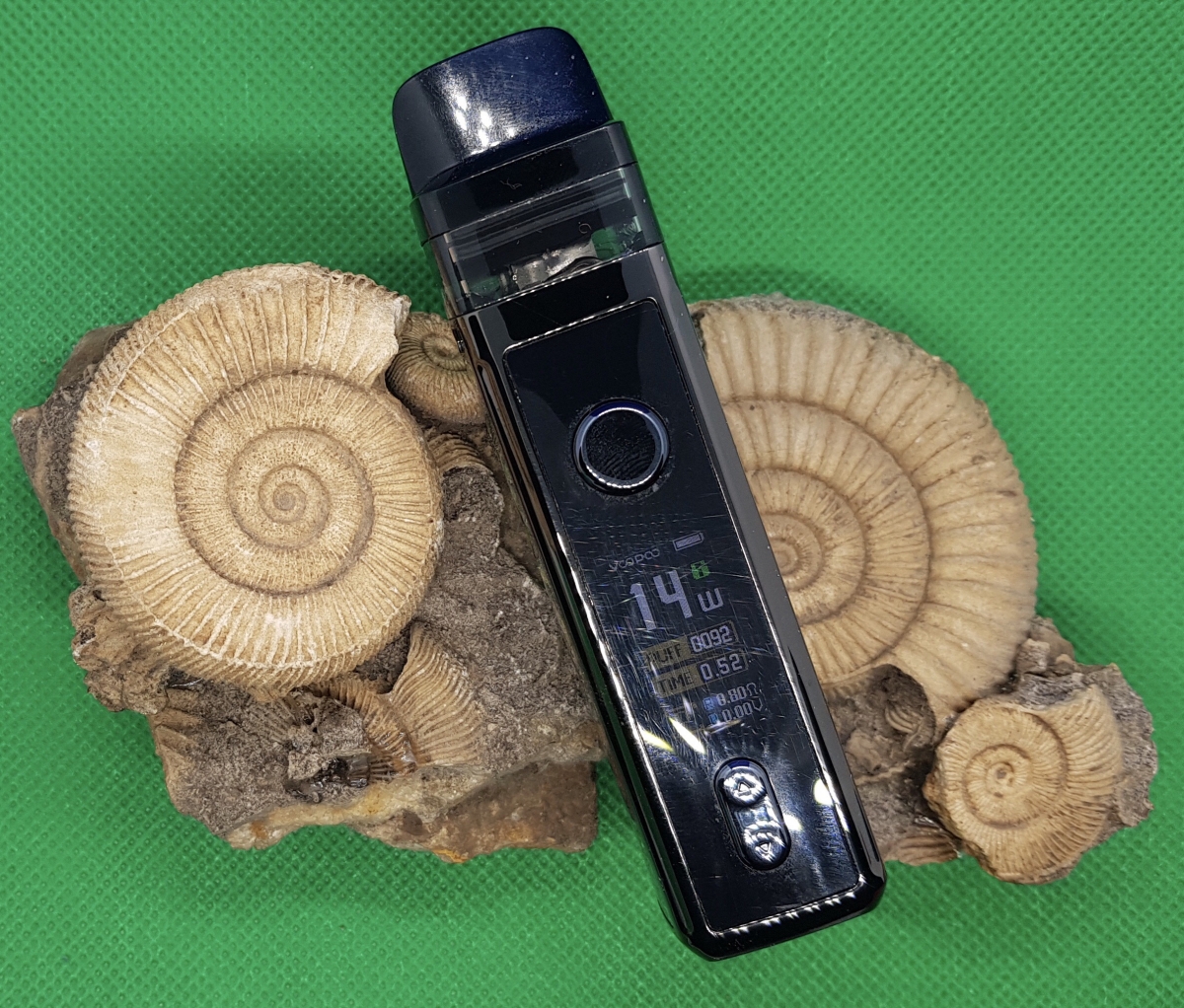