Supplied by VooPoo for review
https://www.voopoo.com/vinci-series/vinci-q-pod.html
Price TBA but I’m expecting to see them online for around £15 ish.

Eh? Another VooPoo pod already? After the superb DRAG Nano 2 and the Vinci Royal Edition, what could the Vinci Q have to offer? Well for a start it takes the same pods so we know it’s going to produce a great vape. But the Vinci Q appears to be a more budget friendly version. 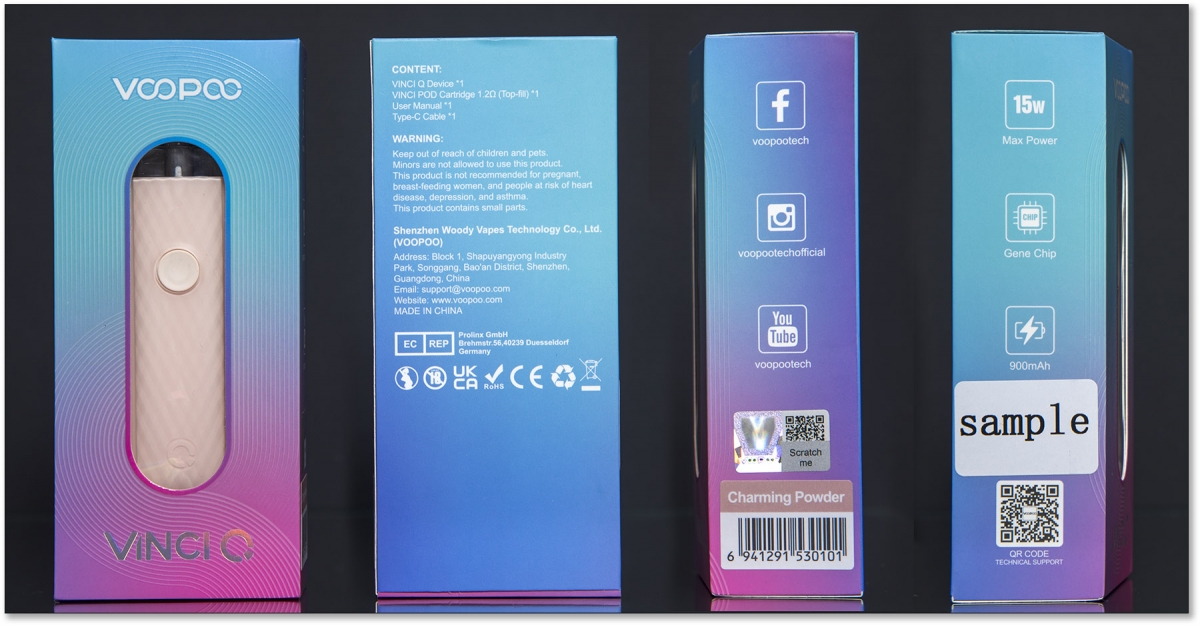 The Pink Elephant in the Room

To be fair, VooPoo have done something a bit different with the colour range and the coating, not quite pastels but soothing colours none the less. There’s a rather cool coating around it, but more on that later. 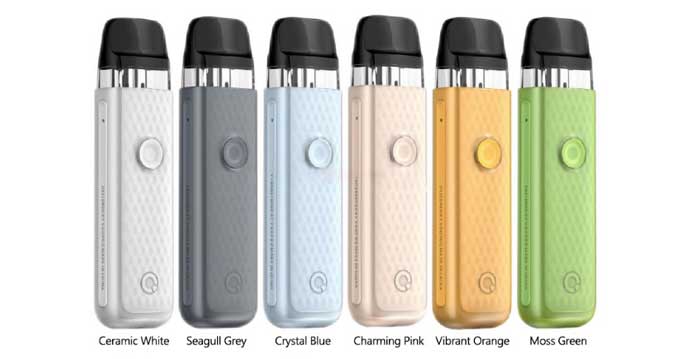 The Vinci Q is a very affordable basic starter kit and the limited bundle has all you need, other than e-liquid, to get started.

You get the Vinci Q device, an upgraded 1.2ohm pod, a USB-C cable, and the user manual, that’s everything so you might want to get some spare pods when ordering or buying (trust me, they are worth it!).

The size and shape of Vinci Q is spot on, compact and comfortable in your hand, and grippy enough with a few hidden styling features underneath the top coating. Imagine your normal injection moulded ABS plastic case which has a pattern on it, then coated with a frosted polycarbonate layer.

Here’s how VooPoo describe it:

Obviously time will tell about fading, but the coating keeps it clean looking and as they said; fingerprint proof. I really like how it looks and feels and it is much nicer than plain ABS pods. I also like the way they moulded around the fire button as it keeps it slightly recessed and avoids accidental firing. 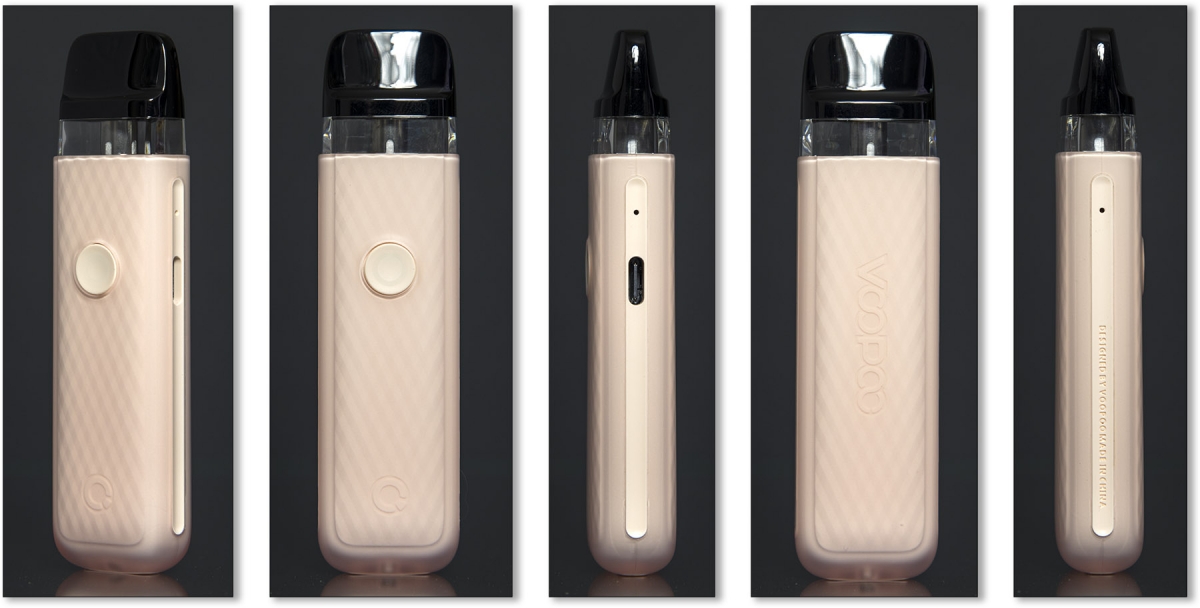 Like the DRAG Nano and Vinci 2 Royal Edition, the pod has full e-liquid visibility. The fire button is really tactile, and it feels quite deliberate to press, but in normal use I doubt many users will use the fire button other than to turn it On/Off.

The USB-C port is on one side and is recessed so you don’t feel it in your grip. It’s just a well-designed pod, and every edge is well rounded, the only tactile edge you can feel is around the pod base as you can feel the polycarbonate coating depth.

The pod is a friction fit rather than magnetic, and it fits perfectly. I much prefer this method as you get a better airflow seal which really matters on an MTL pod. It’s still easy enough to remove and refit, but you won’t need to remove the pod other than to change it over for a new one as it has a convenient flip-top fill.

To flip the mouthpiece off, there is a bit of a knack. Generally you grip it in your hand and prise it open with your thumb, it can feel stiff at first (that’s what she said – never gets old) but I’ve never found it irritating due to the convenience. Once you remove the mouthpiece, there’s a silicone bung; pop out the larger end and it takes standard 10ml bottles comfortably with a little room to avoid airlocks. I love these pods as I’ve never had any issues with messy filling. 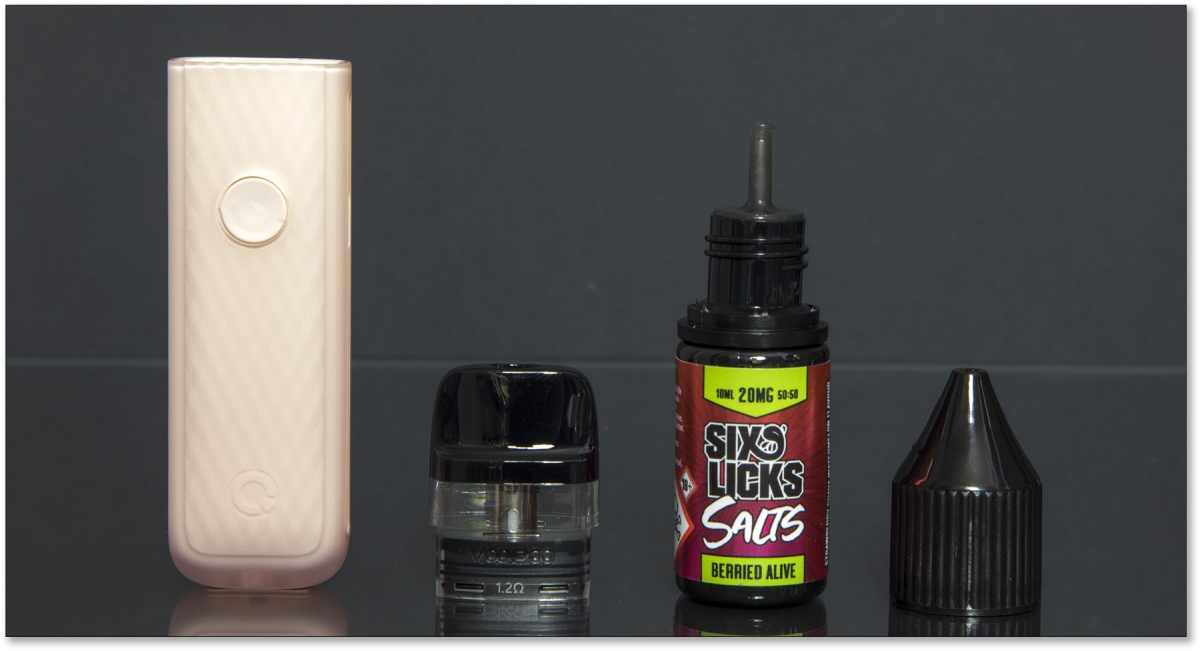 The mouthpiece just snaps back on with little effort, but make sure it is fully clipped down. The kit includes the all-new version which has been refined for flavour, coil life and leak resistance, but the Vinci Q is compatible with the previous Vinci and Nano pods if you own a pile of those (but you won’t get the same level of flavour or leak proofing). 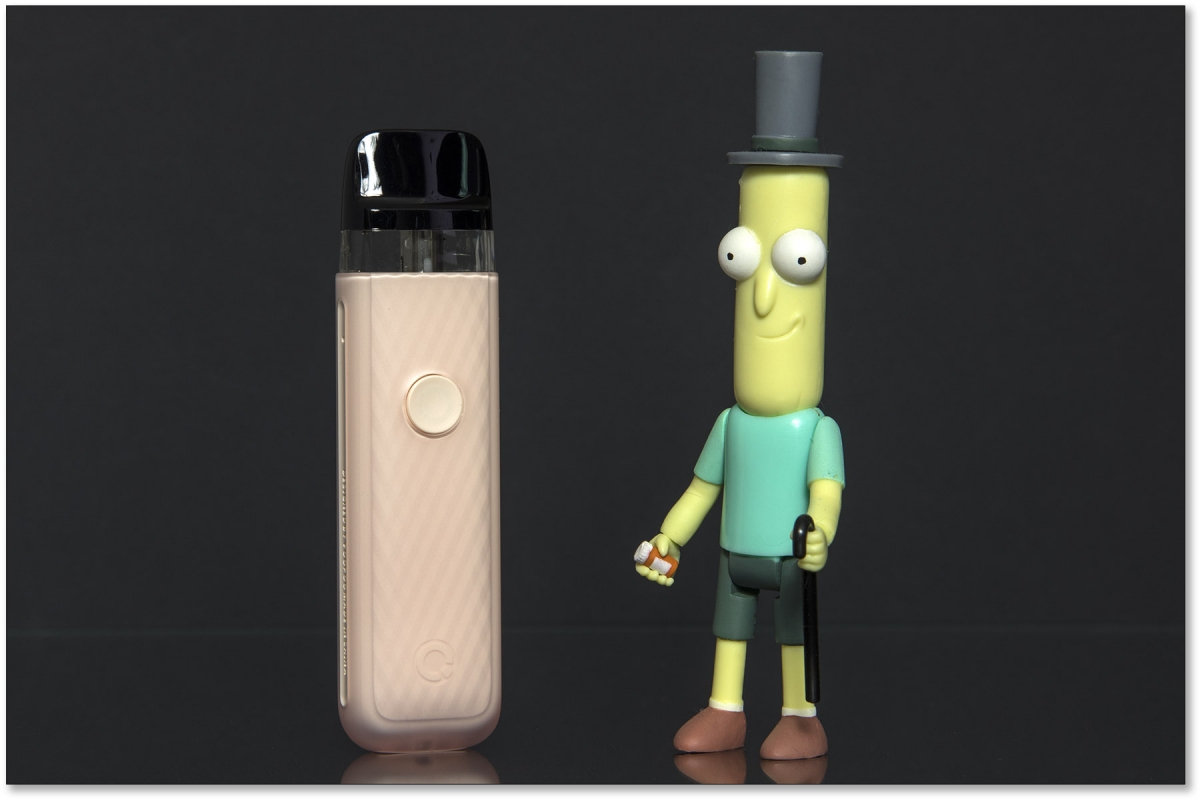 I already knew how good the pod was, but I was wary of the fixed airflow. I needn’t have worried as VooPoo have got the draw spot on, it’s a proper MTL vape and is on the tighter side. If it had adjustable airflow, I would have set it to this so I was impressed.

The flavour, warmth, and airflow are just superb right out of the box. The power is fixed to the pod chosen so the fire button has just two functions. To turn it On/Off, click the Fire button five times, and you can either press the fire button to vape or use the auto-draw, there’s no advantage to using the fire button as the auto-draw is instant and performs flawlessly.

Oh, I almost forgot the cool fire button LED light, it lights up as you draw with a rather cool ring light embedded into it, this also lets you know the battery status (Green = Full, Blue = Medium, and Red = low and time to recharge), the power drop off as the battery drained was hardly noticeable. 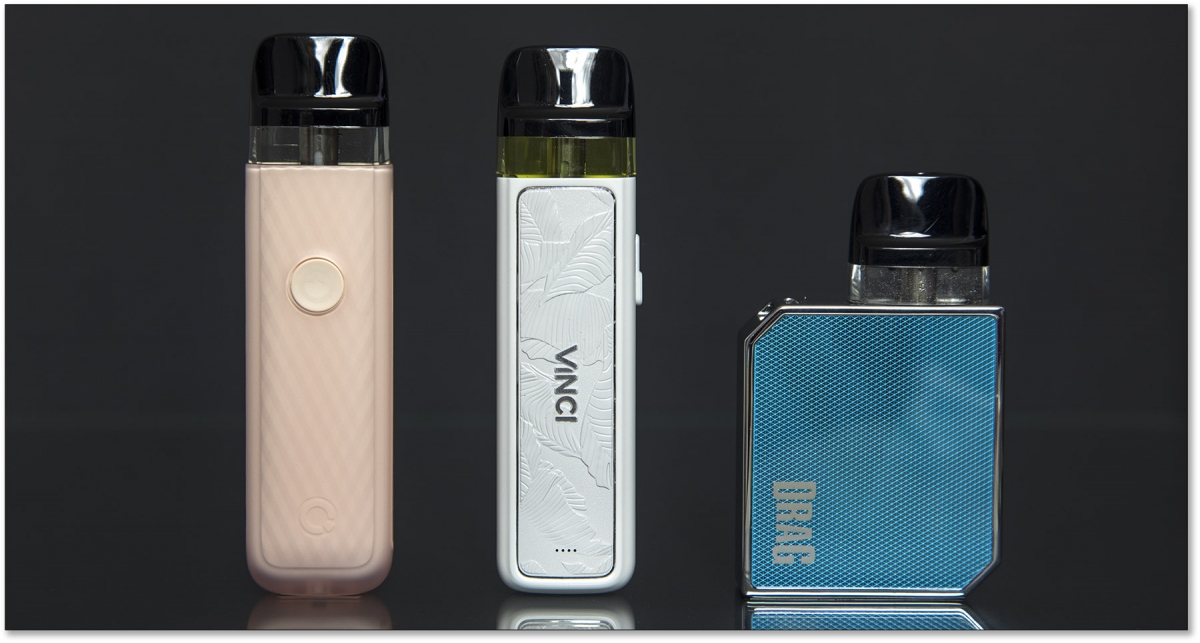 Obviously they all have their own unique look and styling, but there’s some small differences between them:

What they all have in common is the fantastic upgraded pods, and the vape is near identical. All three give a proper MTL draw, and the pods simply don’t leak. Which one's for you will depend on your tastes and budget, I don’t have the exact prices but the Vinci Q is the cheapest out of the three.

For me, the DRAG Nano 2 wins all round, I just love this pod kit and it’s my main daily pod, but I do see the appeal of the Vinci Q. It’s affordability is going to make it a safe bet and you’re guaranteed a great MTL vape.

There’s another factor that is pure speculation on my part; there’s almost a disposable look to the Vinci Q (not that it looks cheap) which may make it a more obvious choice to get people away from the blight of disposable vapes. Put the right e-liquid into the pod, wait a few minutes and get vaping but with the advantage of it being refillable, rechargeable and much much cheaper, and that’s before the environmental benefits, it’s a no brainer as a disposables killer. Was this VooPoo’s intention with this low cost starter kit?

VooPoo have really upped their game when it comes to MTL users recently, their latest upgraded pods have made all the difference and the cross compatible new hardware makes it versatile. The Vinci Q is simply a superb MTL pod device. Putting the colour aside, I have no cons at all with it, put a blindfold on me and it’s one of the very best MTL pods out there.

While there’s no real innovation going on here and the pod looks similar to so many other pods, you have to appreciate the continued effort by VooPoo to refine their products and coils, I can’t really call the device amazing but the vape it produces is!

I just don’t have any, I can’t call the colour I was sent a con as it will still appeal to some people, and there are plenty of other colours to choose from.

I can’t see any reason not to buy one if the style appeals to you, and I’m certain you will enjoy it with no regrets. If you know any disposable users, then point them towards one of these as it is a much better option.